After a month of planning, ODA volunteers got together in Hawai’i to do our first-ever underwater cleanup in a Big Island harbor. 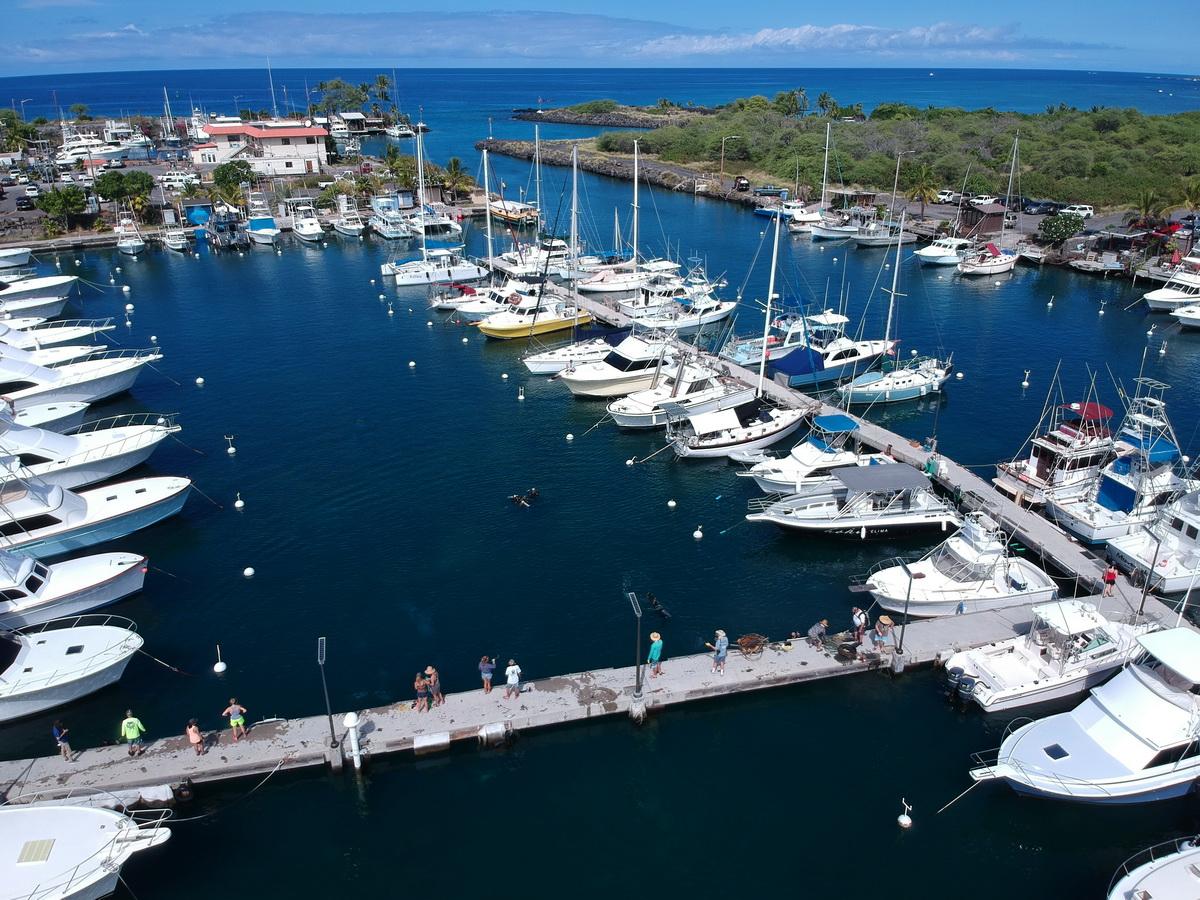 On my last trip to the Big Island, in July of this year, a few of us jumped in the waters of Honokohau Harbor to see if this harbor could use some of ODA’s expertise.  As you saw with my report from that day, we easily found six tires and several hundred pounds of other debris.  We, of course, removed that and we all agreed: this harbor needs more work!

So, on Sunday, September 29th, about 30 volunteers showed up bright and early to spearhead our first (of many to come) collaborative underwater cleanup. 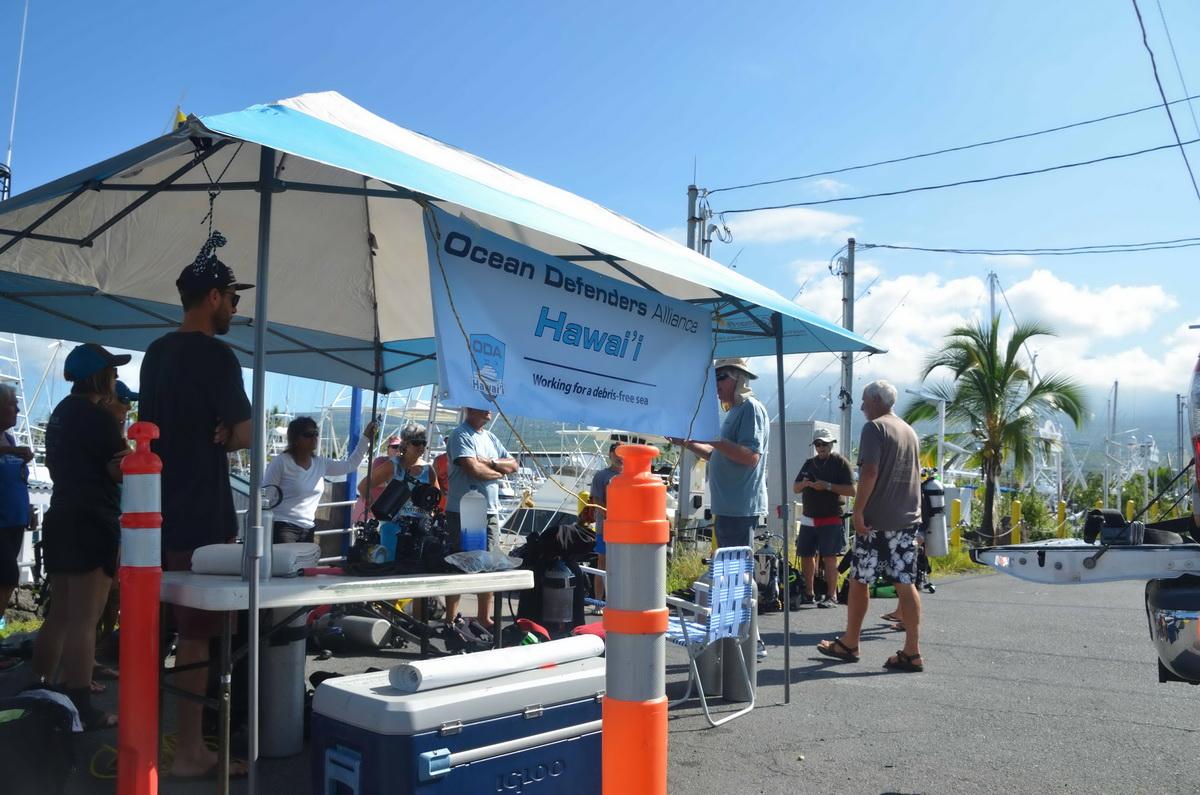 I had been working with Chrissy and Matt Bogdanovitch at Jack’s Diving Locker, to strategize about the best location to start with, AND how best to promote the event.  About three weeks prior to the big day, we put out a flyer announcing the scheduled date, time, and location.  The flyer went out to both ODA’s and Jack’s Diving Locker email lists.  Local defender of the oceans Cynthia Ho also sent it out to her list. Thanks Cynthia!

Come the day of the event, I arrived early to get organized before all the chaos began.  Matt Bogdanovitch was there as well.  Five minutes before the start time, I told Matt that it was looking like he and I were going to be the only divers.  He said no way; there were dozens of people signing up at the JDL office.  Whew!!

Lots of people who care were there

Within minutes, we had all those folks bringing their dive gear down to the docks.  Plus, another dozen or so were there to help haul the debris out of the water and onto the decks that the divers were working under.

After I gave a briefing about best practices and how the divers were going to communicate with the deck crew as to when to start pulling the debris up, everyone walked down to the docks and started jumping in. 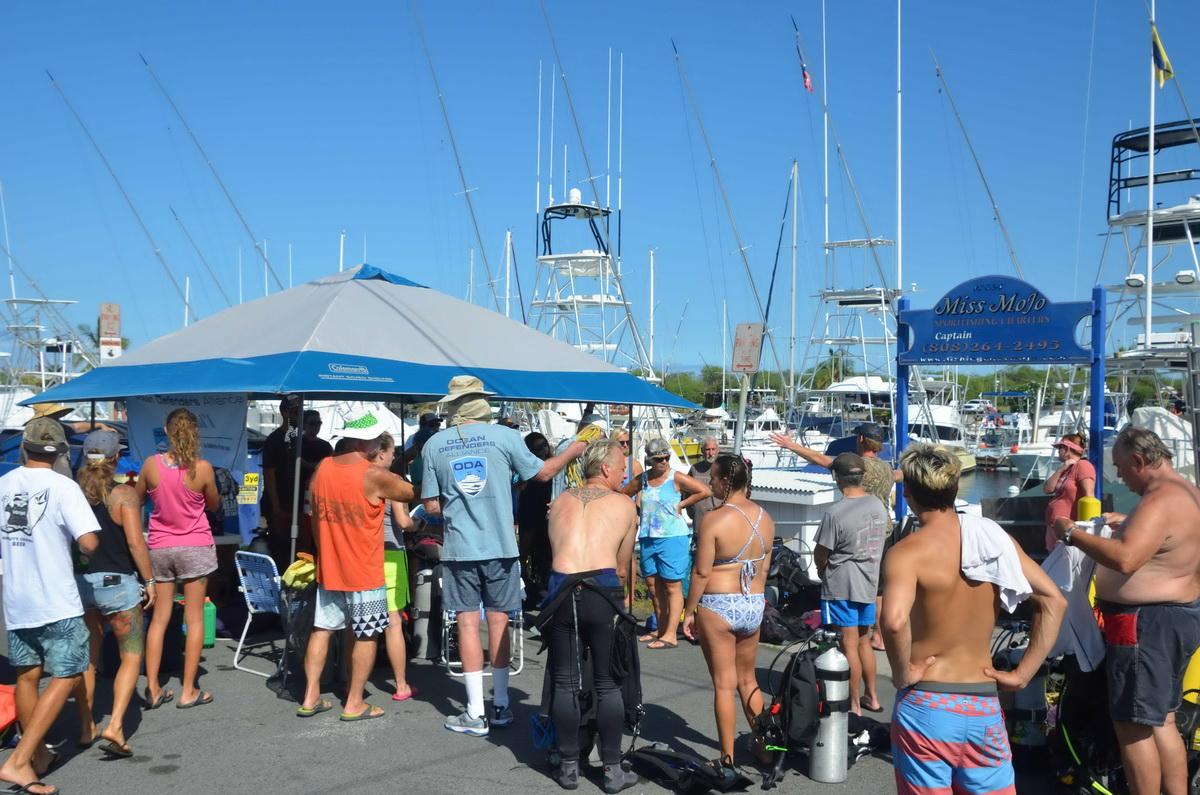 Here is a list of all the volunteers who signed up, but this doesn’t represent everyone who was there, as some of them came late to the party.  That said, here are the names of the people who did sign up:

I’m sorry to say that we didn’t get the names of each diver, but I estimate that there were almost 20 divers participating.  We even had two people filming underwater:  Jeff Leicher and Joe Weston.  And to top it off, pun intended, Bob Jensen brought along his drone and took video from the air.  With me on the docks taking pictures, we had all angles covered!

It was “raining” debris!

Within five minutes of the first diver getting in, we started pulling all kinds of debris up: tires, rugs, hoses, tubing, fishing lines, nets, beer bottles by the score, anchors, chains, rope, a hairdryer, a bicycle, tires, and more tires… 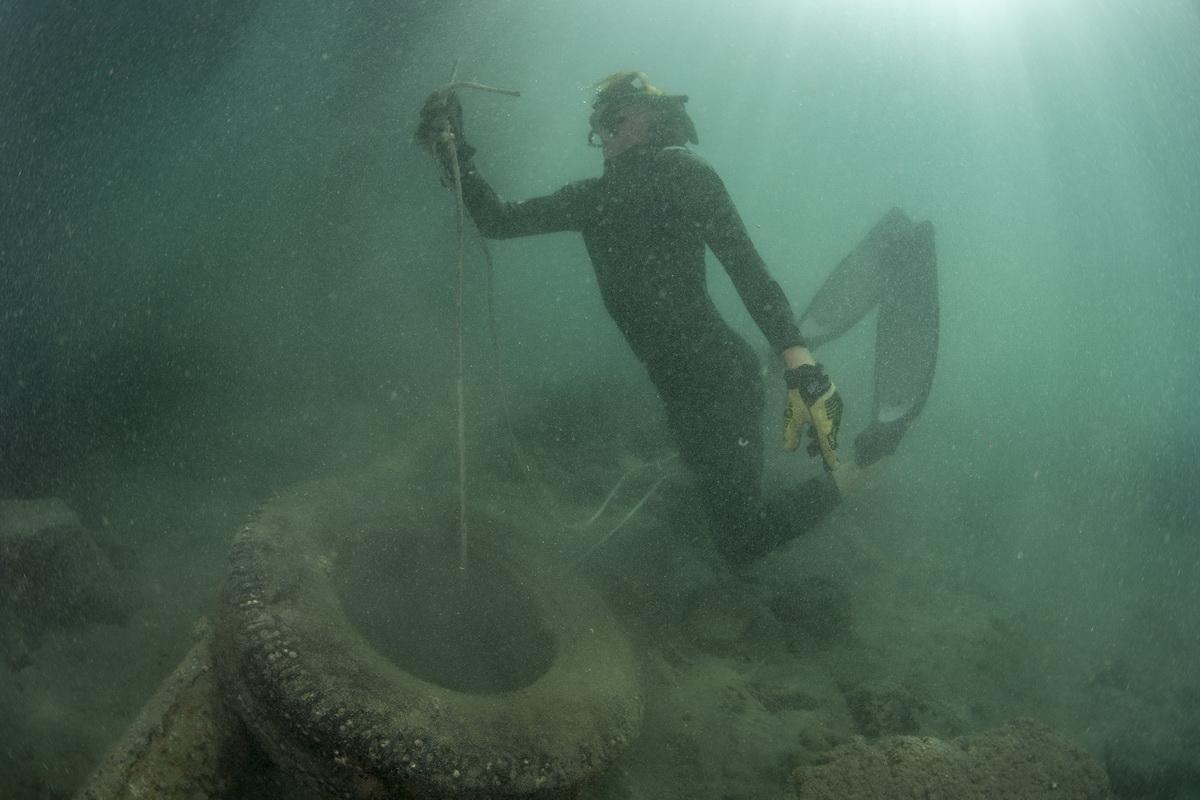 We have a great series of underwater photos of the entire tire removal process. Be sure to check out the photo gallery below for that series and a TON more great photos of all the volunteers' hard at work! 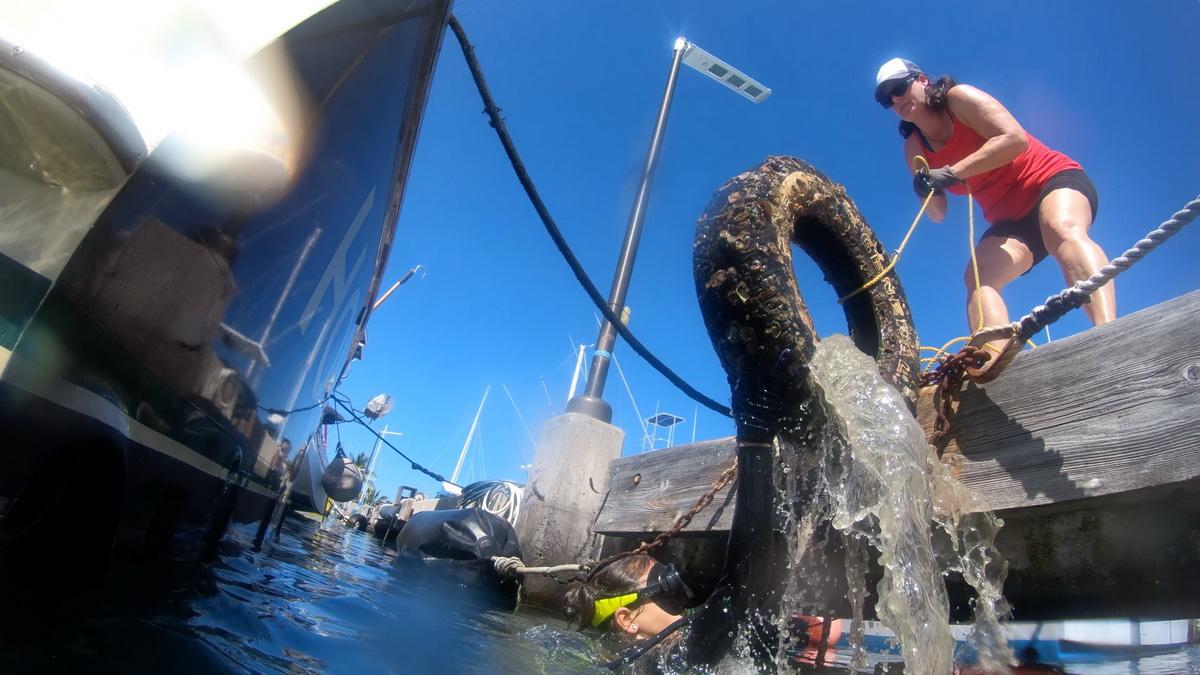 After 90 minutes of activities, we made the decision to call it a day. 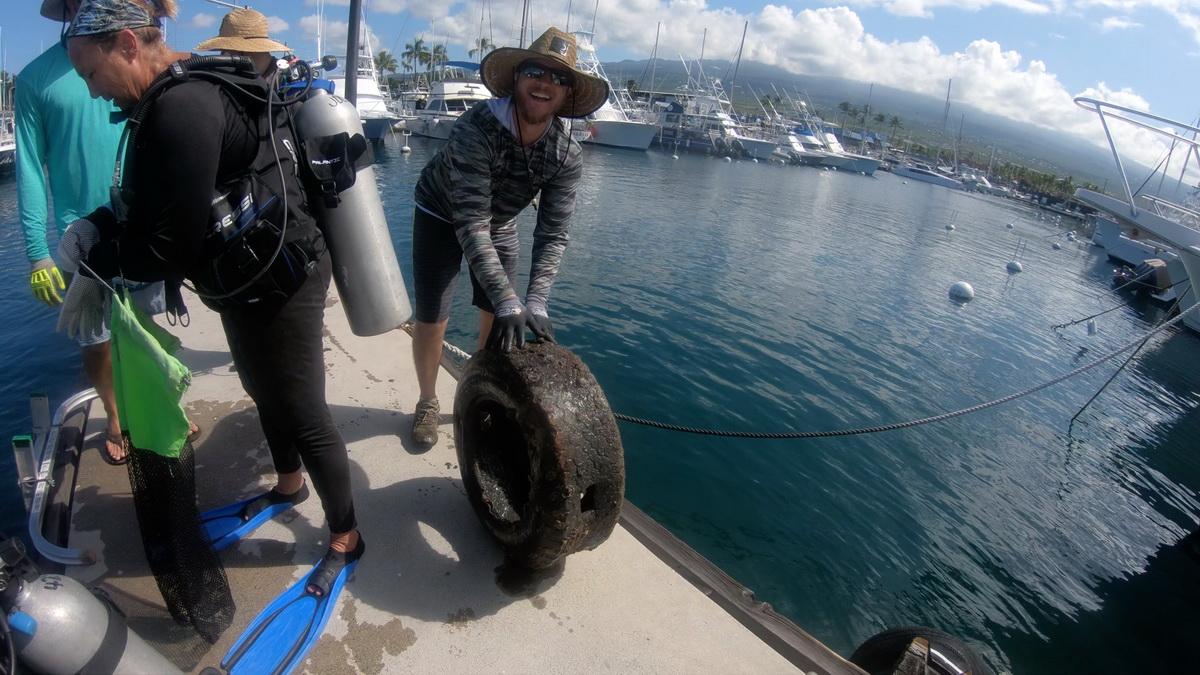 We had to think about our hard-working volunteers. It was hotter than a frying pan, and the sun was just relentless!  Plus, we still had the herculean task of hauling all of this junk over to the disposal bins, taking pictures, and then sorting out what would be recycled and what was going to the landfill. 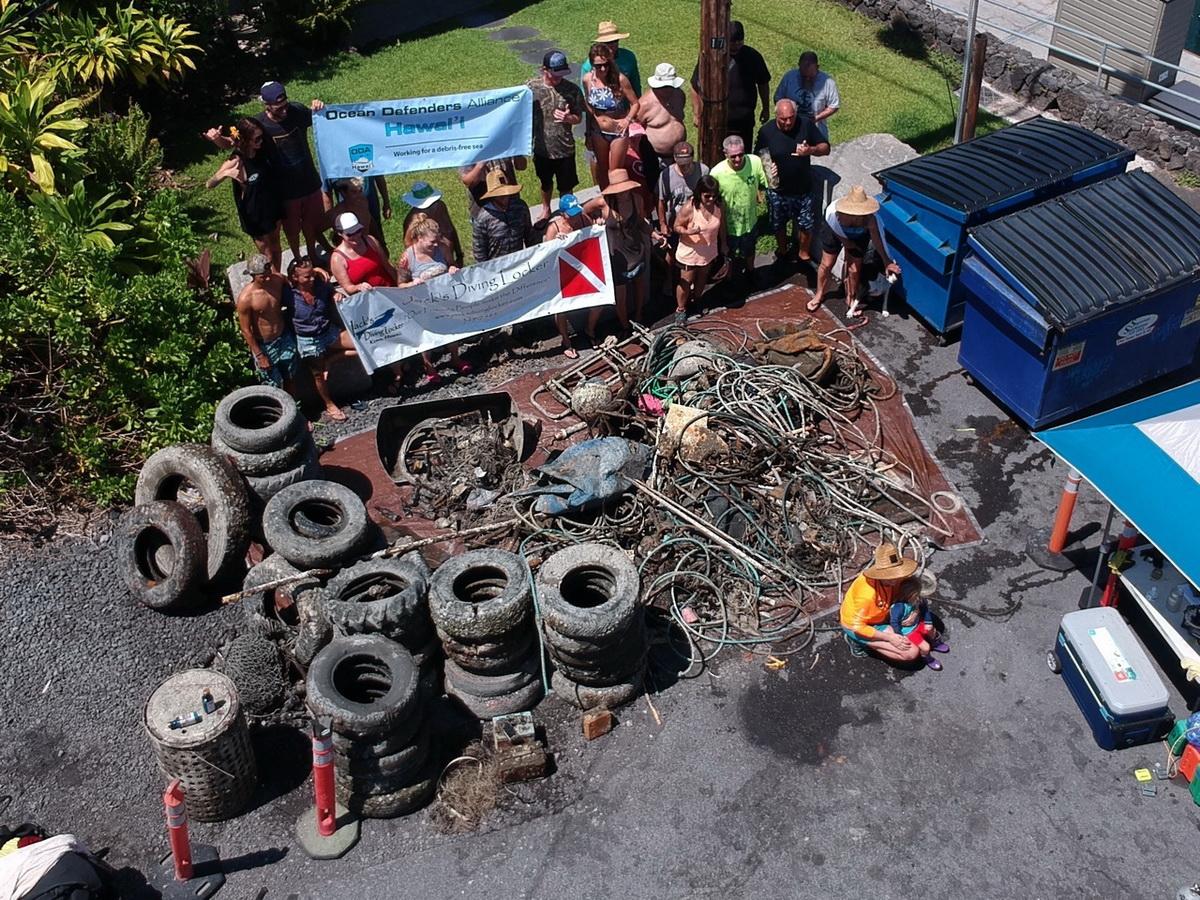 As you can see from our pictures, it was quite the haul.  Roughly 3,000 pounds of miscellaneous debris would have to go to the landfill. Forty-five tires, and five batteries to be recycled along with dozens of bottles as well. 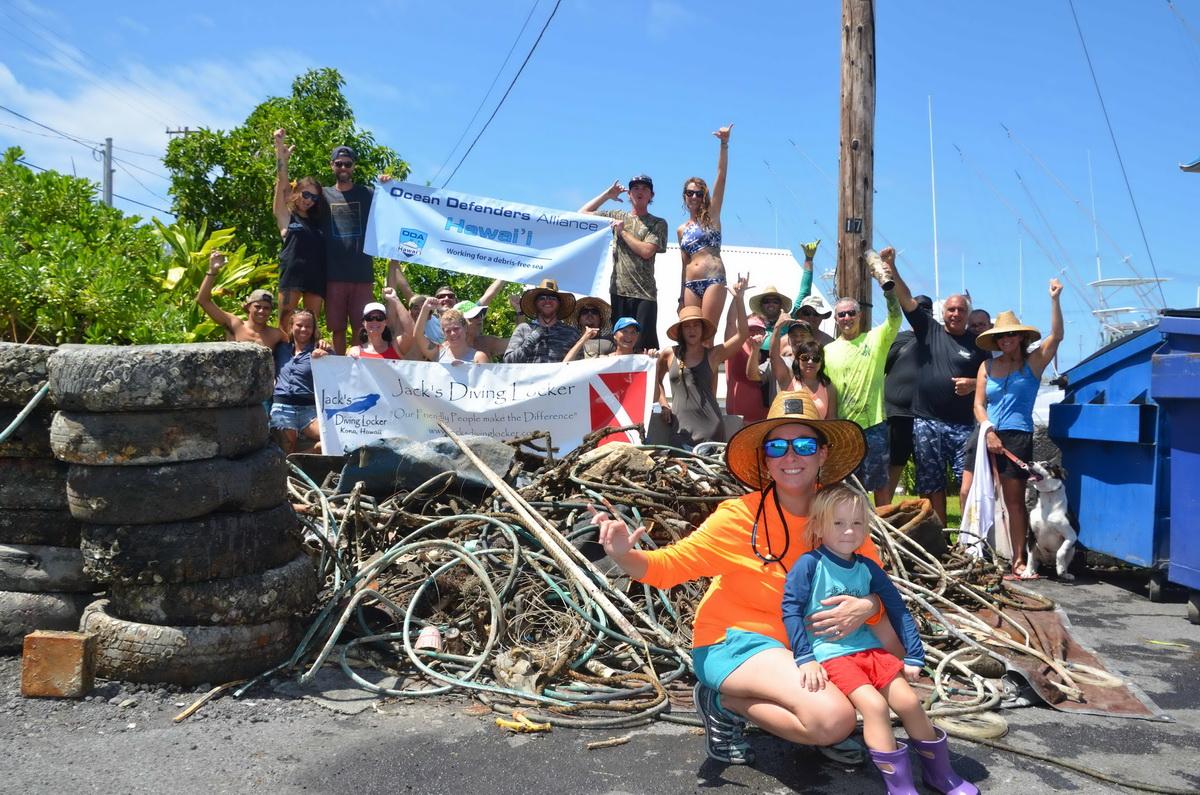 As some divers were coming to the surface, I could hear them talking excitedly about the cool critter that they saw: a puffer fish, several file fish, nudibranchs, some octopus, a green lionfish.

They also saw several green sea turtles, one of which had some nasty fishing line around its front flipper. 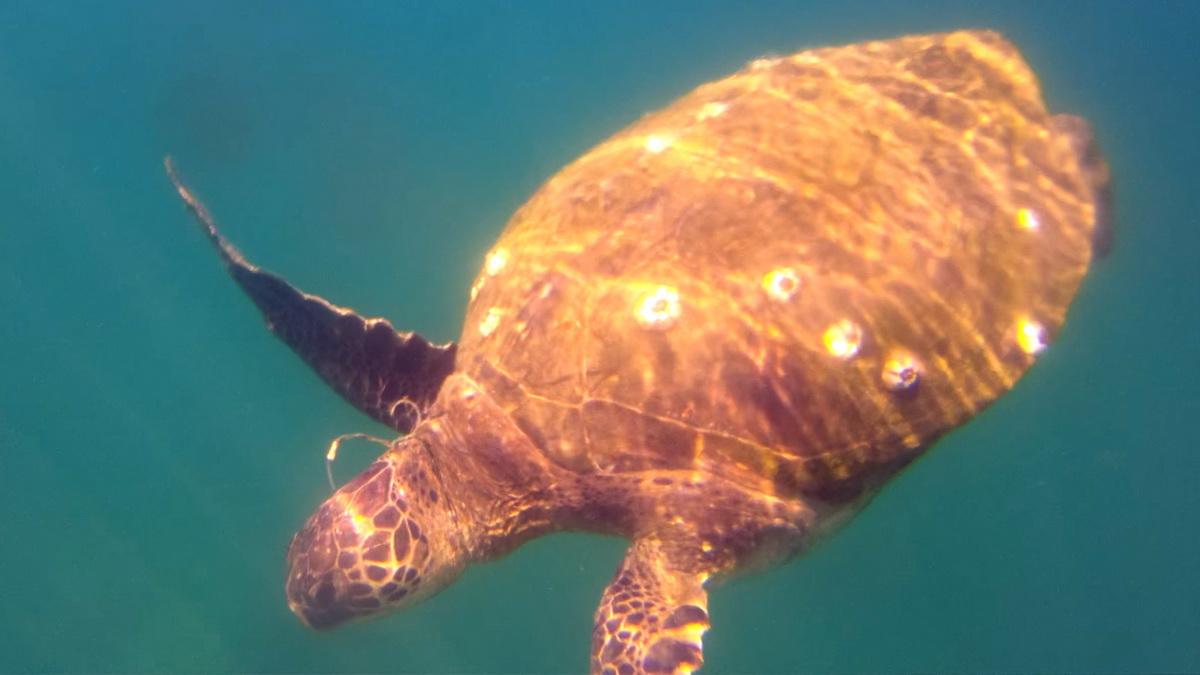 Jeff tried to catch the animal to cut the line free, but not to be… Jeff did get this picture to show it.

Awesome people helping with this project

I want to thank Daniel Mersburgh who works at the Harbor Master’s office.  We had been communicating for several months, and he helped me secure the permit that gives ODA permission to clean up the harbor for the next year.  He also worked with the Harbor Master who agreed to have the harbor pay the dump fee for the landfill.  Way to go Dan!!  The staff workers also helped with the process: Suzanne Ow, Chad Provost and Tania Taitano. We’re very happy to be working with the fine people at Honokohau Harbor. Together we will make these waters much cleaner and safer for ocean wildlife to make their home! 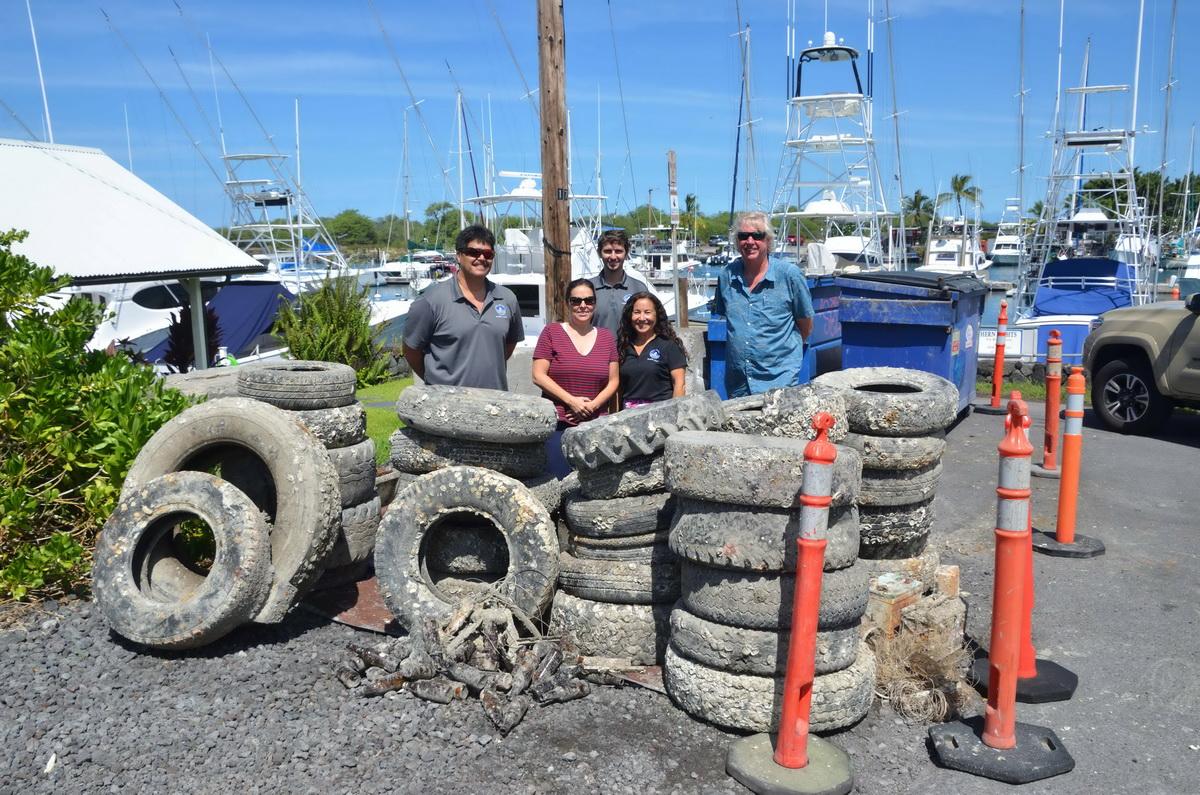 Lots of appreciation goes to Allison at Superior Sanitation, for getting the disposal bins donated to us for the day.  They gave us two bins, and we filled both of them up to the top!

Cameron wrote a really nice article about the day and it was published the next day, on the FRONT page of West Hawai’i Today.  You can view it here but you'll want to look at our photo gallery below as there aren't any images in this article.

Lastly, we owe a debt of gratitude to Teri and Jeff Leicher.  They own and operate Jack’s Diving Locker, and without their partnership and help with organizing the event…well this just wouldn’t have happened.

While we got a ton of debris out of the harbor, literally 2.5 tons, we only worked on less than 10 percent of the harbor.  As long as people continue to support our efforts, we’ll be back! With boatloads of gratitude…