Spring Cleaning for the Ocean 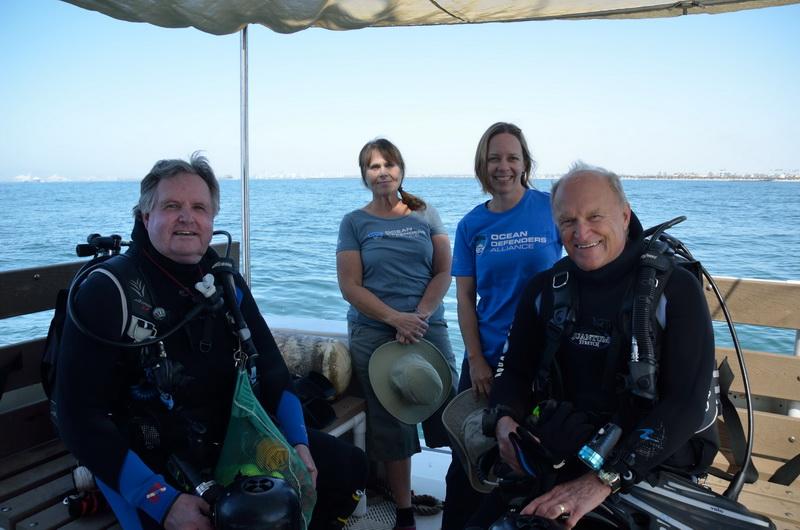 As we pulled out of Los Angles (LA) Harbor on Saturday, March 26th, our spirits were buoyed by the fact that the lobster hunting season had just ended and we could now start removing all the traps lost by fishermen over the last six months. Our goal is to remove these literal “death traps” that continue to capture and kill marine life of all kinds, long after the lobster hunting season is over.

The seas were pleasantly calm, considering the 4-8 foot waves that had been pounding our coast for the last few weeks.  We headed to Huntington Beach, where we almost always find abandoned traps.  The skies were partly cloudy, but because of all the big waves and rain we’ve had, from the surface the underwater visibility looked horrible.

The divers on this day were Al Laubenstein and Dave Merrill.  Helping out on the deck were Lisa Davis, and first time volunteer Karla Reinhardt.  Karla is a welcome addition to our team.  She has extensive experience on sailboats, is active in marine conservation, and is good with a camera, too.  Welcome aboard, Karla!

We dropped anchor in about 40 feet of water, and as Al and Dave got into their dive gear I launched our quad copter to film the activities.  So some of the pictures you see here were taken from the air. 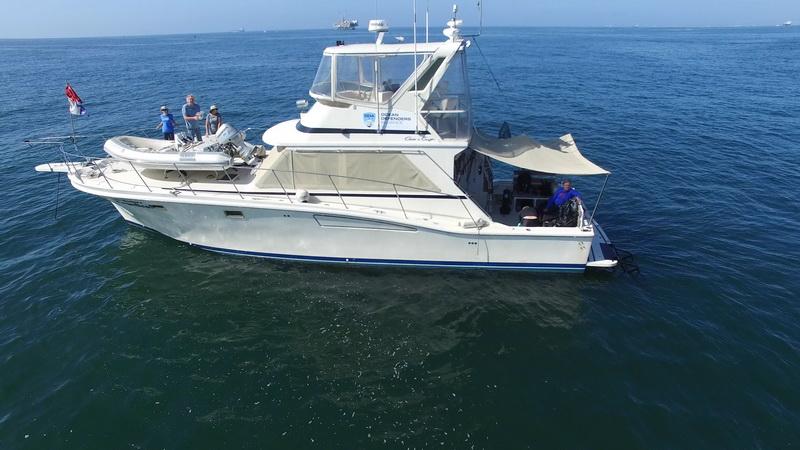 As Lisa was handing Al and Dave their scooters, we could see that the visibility was awful, as you couldn’t even see their fins five feet under the surface.  The guys headed to a breakwall which was about 200 feet away, and dropped down into 25 feet of water.  They were down for only a couple of minutes when they surfaced, talked and then dropped down again.  They had gotten disoriented due to the 3-4-foot visibility. 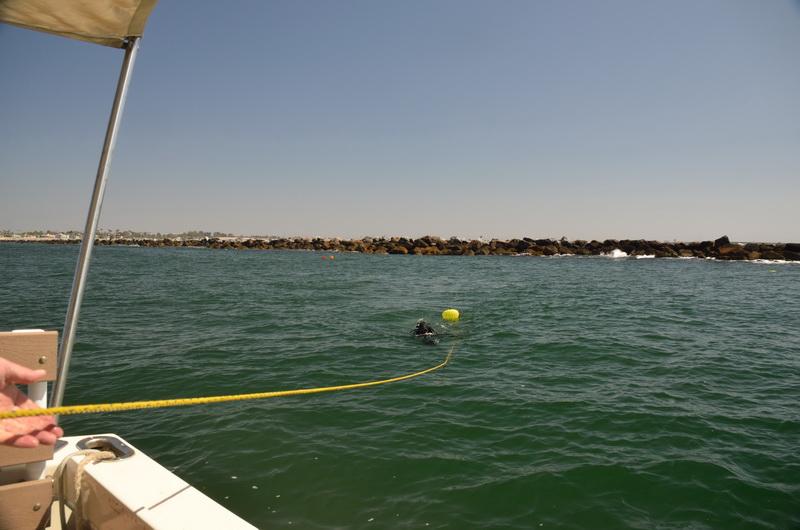 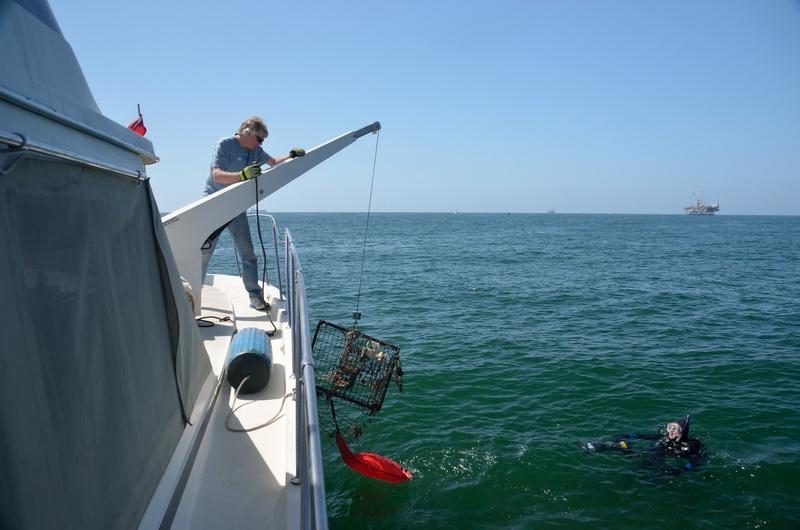 Because they were so close to the breakwall, Al and Dave came back to the boat and picked up some lines to attach to the lift bags and traps...and then Lisa, Karla, and I started pulling them over to the boat.

The Marine Wildlife We Work For!

The guys then maneuvered the traps over to our davit where we then proceeded to haul each trap onto our front deck.  When all was said and done, we had four lobster traps aboard, and one tiny, tiny octopus.  We got that little critter back into the water quickly!  These are the animals we are working to protect, and interacting with one is always a poignant and powerful (and awesome!) reminder of who we work for. Go little octopus, and thrive! 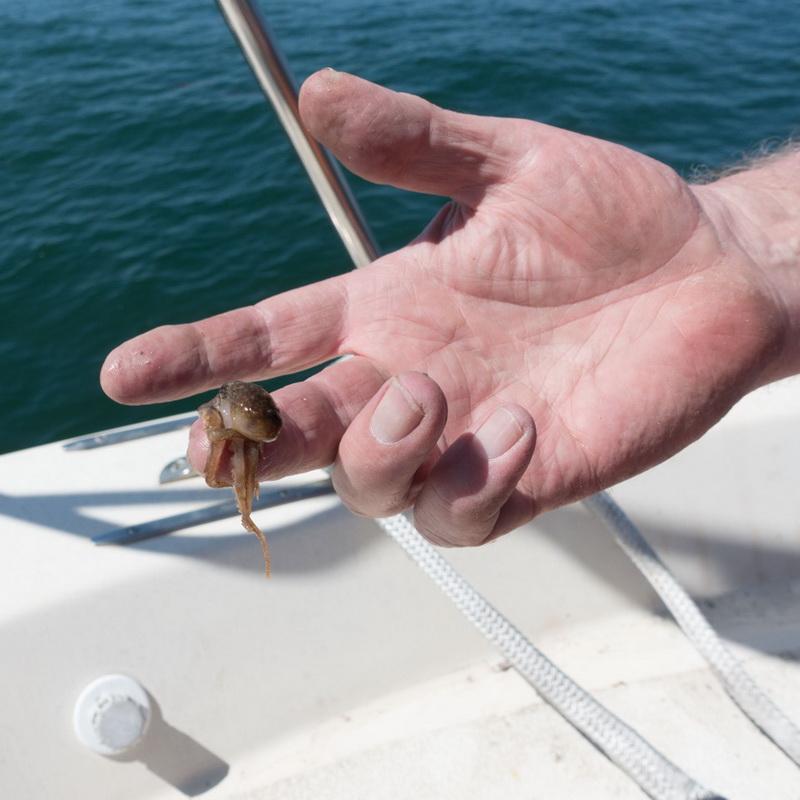 On our way back to the slip we were motoring along the LA/Long Beach breakwall when we saw an even larger “client” of ODA: our first whale of the day.  It was a small gray whale.  They are in the midst of their annual migration to the feeding grounds of Alaska.  What was unusual about this was that this appeared to be a baby, and they are almost always accompanied by their mother, but she was nowhere in sight. 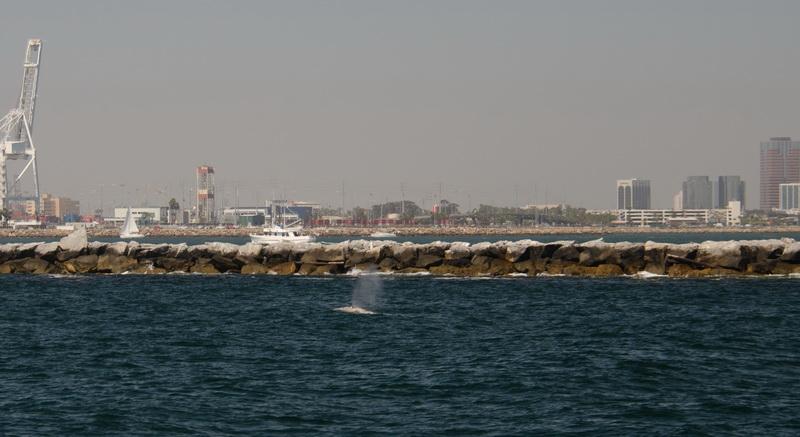 Within minutes though, we saw another whale, this one much larger and most likely the attendant mother.  Good luck you two, we all wish you good (and safe) travels!

Give a Hoot! Don’t Pollute!

Before we got back to our slip, we saw a LOT of plastic debris in the water.  It was really disturbing.  We were seeing not only Mylar balloons, but shopping bags, water bottles, bottle caps, sandwich bags…you name it—it was out there.  Heading for the Pacific Garbage Patch no doubt.  We scooped up what we could with our “fishing” net and removed the garbage, which included seven Mylar balloons. Those balloons do not make a “happy day” for any kind of marine life. 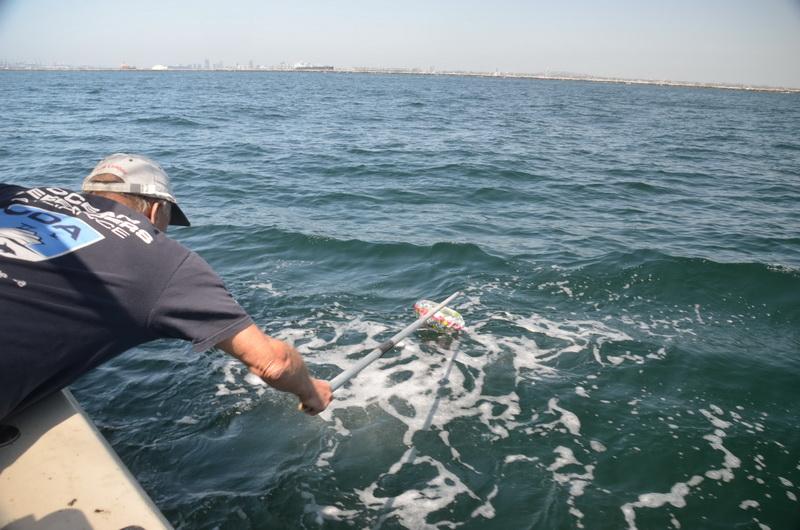 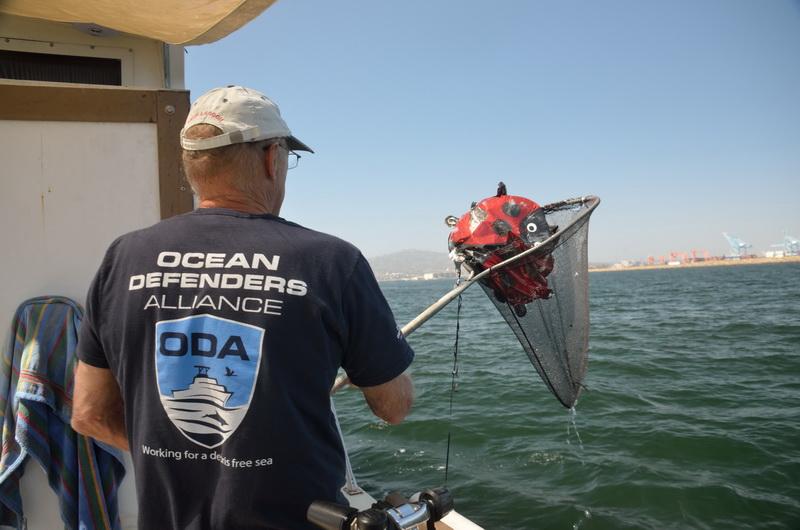 Despite seeing this manmade debris, which can be disheartening, it was a great day. Even though we didn’t have many people onboard, we got a lot accomplished.  A glorious Spring day on and under the water with more debris hauled out that will NOT be killing our precious wildlife any longer!

As we sail into the busy debris-removing season of 2016 together, I thank you for your support. Without you, this life-saving work would not happen; it is really that simple. YOU make the difference. Your donations are what keep us fueled and finned!

Will you “dive in” with us today by making your donation?