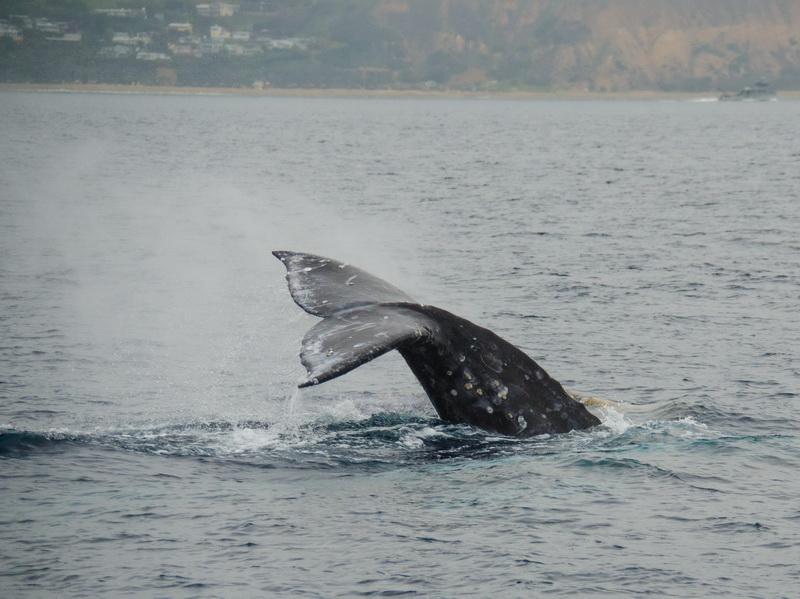 With the holidays behind us, and the upgrades to our boat (the LegaSea) finally completed, our awesome volunteers are ready to jump into 2015 with renewed energy and purpose!  On Saturday, January 10th and Sunday the 11th, we took the boat out and kicked-off our new year.

I had invited a few of our supporters and volunteers to come out last Saturday on a scouting mission. It was a nice opportunity to look for wildlife that we work so tirelessly trying to save.

The group included Linda Nicholes and Howard Stein, who we are fortunate to have as our patron saints.  Back in 2006, Sea Shepherd Conservation Society offered to donate a boat to us; the caveat was that I had to get the boat down to southern California.  Yikes!  That was a ton of money for us.  When I told Linda about this incredible opportunity, she immediately talked with Howard about it, and they agreed to donate the money to have it shipped down here from Seattle.

That boat, the Clearwater, became our workhorse-and for the next seven years we removed (literally!) tons of gear from the coastal waters of southern California. We were only able to remove that gear-and save tens of thousands of marine lives-because we had such a sturdy working platform.  Similarly, it is only because of the generosity of Linda and Howard that we were able to tackle the largest and deadliest nets and traps. These actions also helped get the attention of the media and highlight the ODA story to the public.

More recently, in September of 2014, we purchased "Mr. Barker's LegaSea" and spent several months preparing it our specialized operations.  Now, with the LegaSea ready to roll, we headed out to view the coast of Palos Verdes, and see what we could "sea." 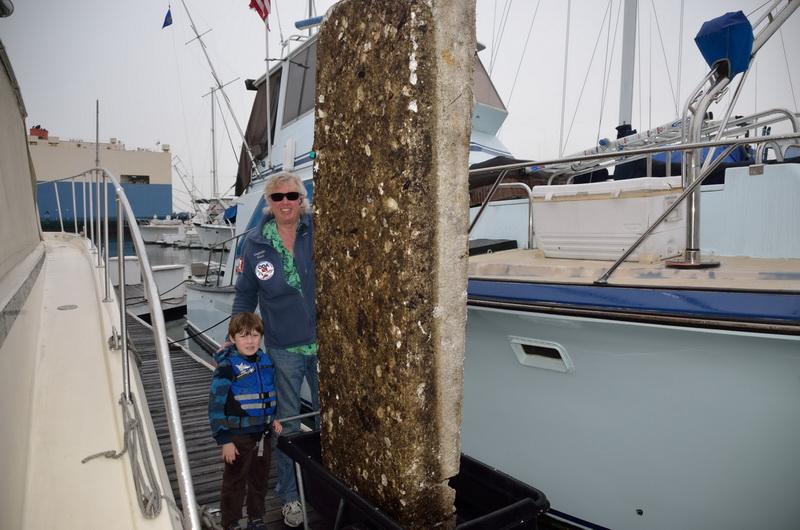 Before we even got out of Los Angeles Harbor we found a HUGE slab of plastic floating on the surface.  This was seven-feet long, three-feet wide, and one-foot thick-all toxic, forever-lasting Styrofoam. YUCK! Whenever I see this stuff it makes me sick to my stomach because I see birds perched on top of it pecking away at the small white pellets that make up this stuff.  The birds mistake the pellets for fish eggs and will gorge on them till their stomachs are full, of plastic!  The result is a slow and painful death.

So, we collected and stashed that on the rear dive step and made our way to see the coastline.  As we approached the Point Vicente lighthouse we started to see whales spouting in the distance.  The gray whales are migrating south right now, toward the warm waters and lagoons in Baja, Mexico.

I steered the boat out to where we saw their blows, about two miles offshore, and soon we were following a pod of six whales (at a safe, respectful distance, of course!).  These whales were swimming so close together that they seemed to be in constant physical contact with each other.  I had never seen that kind of behavior before.  It was pretty darn cool to see these stately animals going about their annual 7,000-mile migration, right through the coastal waters of one of the highest densities of humanity on the planet.

But it felt like we were in another, wilder, world.  There were no other boats around us.  And as you can see from these pictures (thank you, Jim Lieber), the whales were not bothered at all by our presence.

After about a half hour of following them at a safe distance we turned to head back to our slip.  As we were doing this, we saw some of those gall-durned mylar balloons; we see them on almost every outing.  You know, the kind that seems so cute and innocent while a child is holding it.

Cute that is, until they let go and the winds carry those helium filled balloons to the ocean.  The helium eventually leaks out of them and they settle on the surface and then start to sink down into the water column.  That is when whales and turtles swallow them because they look like food.  Linda scooped up the first of six we removed, and it said HAPPY BIRTHDAY on it.  How ironic that it actually was her birthday! She actually WAS happy to be cleaning this out of the ocean on this special day.

In all, it was a GREAT way to start of the New Year, and everyone onboard was ecstatic about our encounters with the magnificent whales, dolphins, and sea lions.

Alright Kurt, Back to Work! 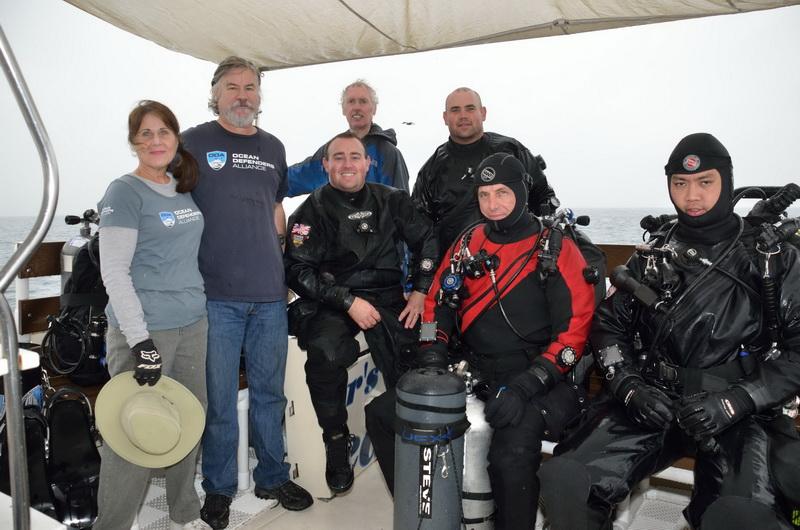 The next day we got back to doing what ODA does best, locating and removing ghost gear.  The divers this day were: Peter Fulks, Trevor Fulks, Steve Millington (dive team leader), and Andy The.  Jeff Connor stood by as our Dive Master, while Lisa Davis and Jim Lieber (First Mate) acted as deck support.

We anchored just outside LA Harbor.  The guys dropped down into 65 feet of water and started conducting their search patterns.  Because they were using underwater scooters (thank you Mr. Barker!), they were able to cover a lot of ground.

While waiting aboard the LegaSea, we were visited by several curious birds.  Obviously looking for a free handout, but alas, they were barking up the wrong tree and flew off to find some real food. 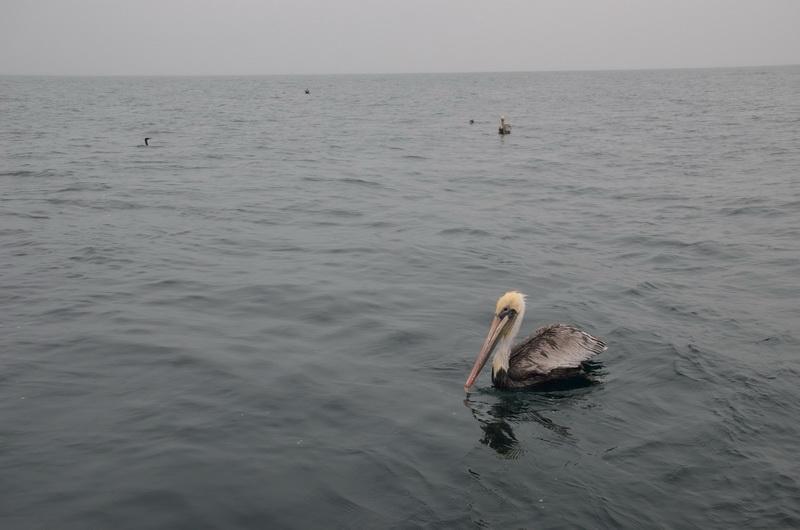 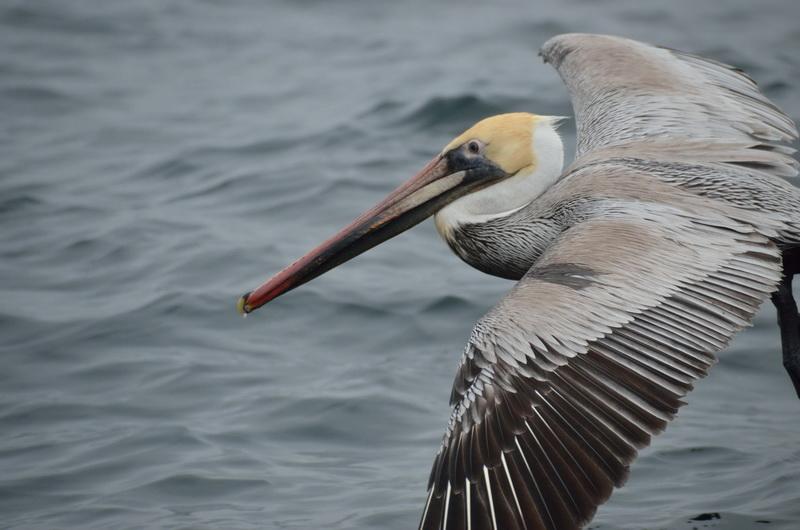 Within an hour we had five lift bags floating all around the area, each with deadly marine debris attached to it.  After we got the divers aboard, we hauled in the anchor and started the process of rounding up the lift bags.  By now, the seas and currents were picking up a little, so retrieving the bags was becoming a challenge.

We soon had three lift bags hauled in, with two traps and one stove successfully hauled onto the boat.  Unfortunately, this is where things started to go wrong.  First, the steel cable on our hoist snapped; thank goodness no one was close when it happened (safety first, always!).  So, switched to our back-up hoist system…meaning we used our hands and backs to haul the debris up and onto the boat.
Then, as I was positioning the boat to pick up the last lift bag, the currents suddenly shifted the bag down and directly under the boat. We immediately noticed a problem. The divers checked it out and found about 200 feet of trap line attached to the bag, and the line had wrapped around the propeller. UGH! 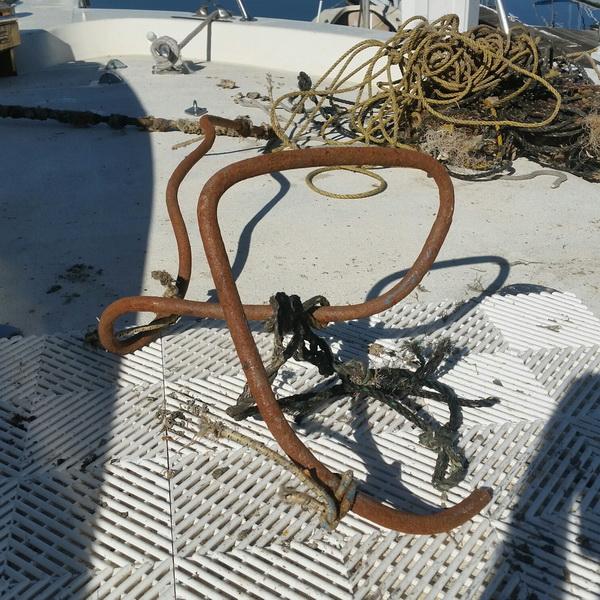 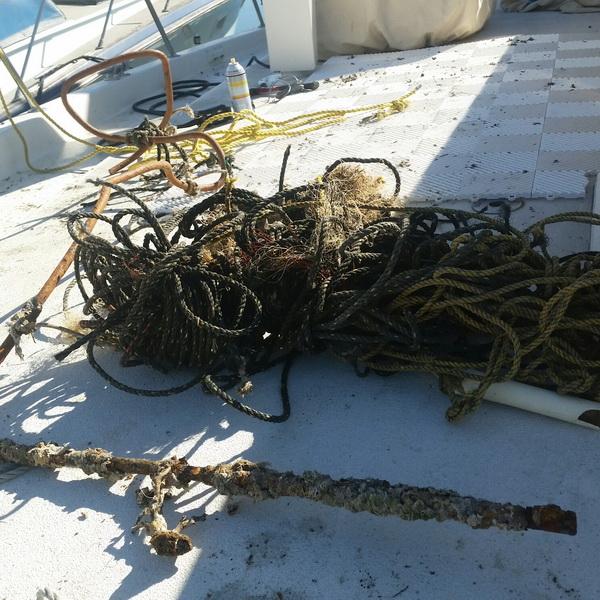 Now I had to motor the boat back to our slip using just one engine, but it was working fine.

During the dive, Steve and Andy came across a boat wreck that appeared to be newly sunk.  So, on our way back to port, Steve, Peter, and Trevor dropped down to have a good look and film it.

This is a big boat, probably 50-feet long, and it appears to have just been sunk. Fuel, oil, batteries, and other pollutants are likely still onboard.  Knowing how devastating those pollutants can be to the ecosystem, I started calling around to various agencies to see if they knew about this wreck, AND if they knew anybody that was going to remove it.

As of this writing, no one I have talked to knows anything about it, and hence I don't know if anyone plans on removing it.  Stay tuned and I will update you as things progress. 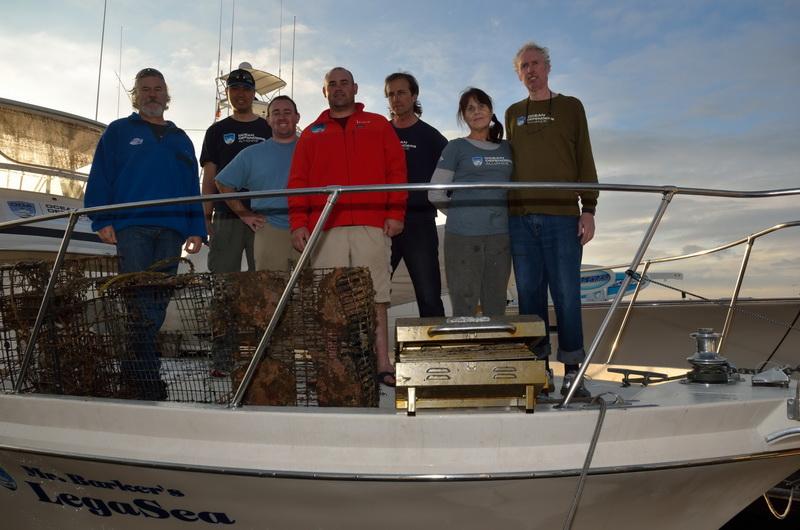 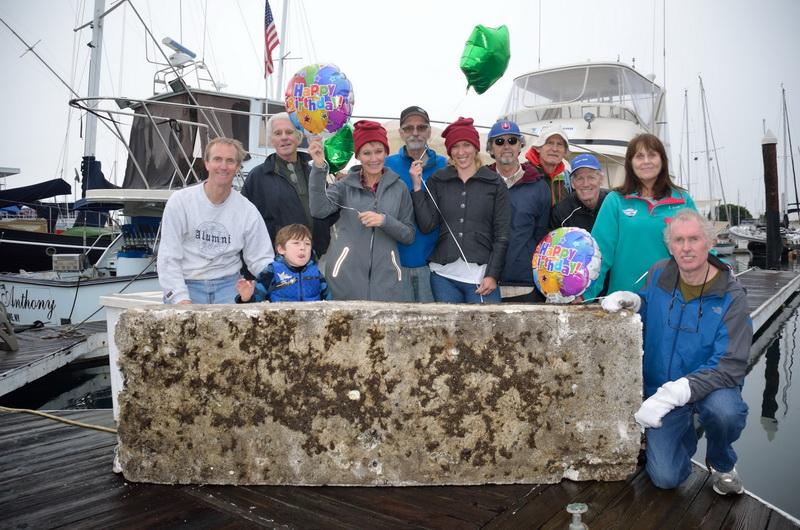 If no one is going to do anything about this toxic material, ODA will do all we can to recover the batteries and anything else we can safely remove.  Thanks to our dedicated volunteers and supporters, we have the ability to act quickly when necessary!

2015 has certainly started with a bang, and with your support we look forward to a spectacular year of ocean defense activities!

Enjoy all the pictures (in larger sizes!) in our photogallery below. Please click on any image to enlarge.