With summer now officially underway, just thought I’d fill you in on a few things that we’ve been up to since I returned from Hawai’i where we expanded our operations from Oahu to Maui and the Big Island.

The Ocean Dictates Our Activities 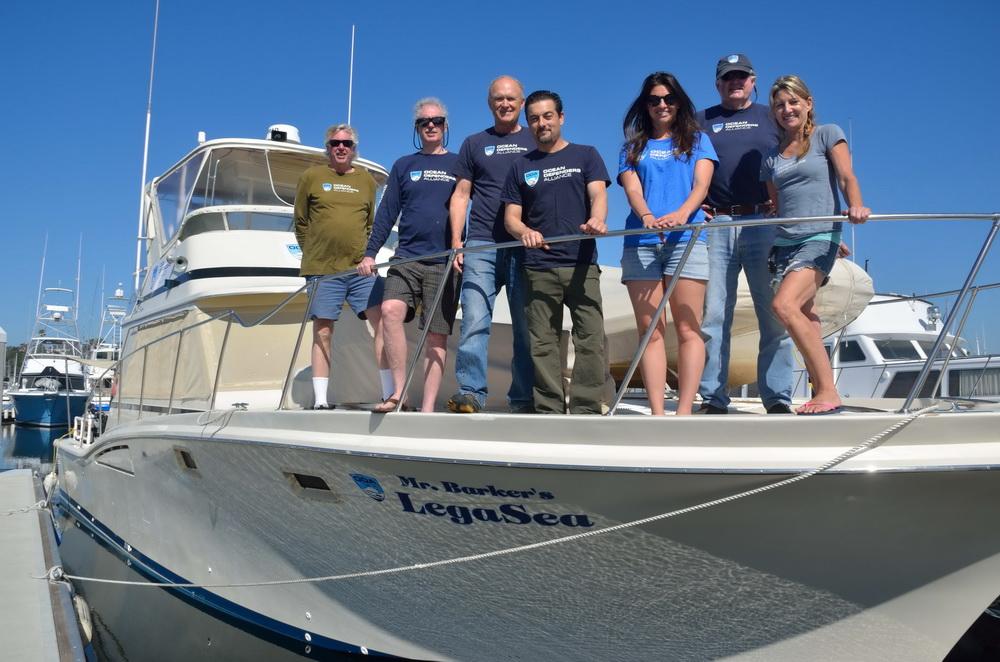 On May 21st, we took our flagship Mr. Barker’s LegaSea out to the Los Angeles Harbor breakwall and dropped anchor in 60 feet of water. We were going to start looking for abandoned lobster traps.

The divers were: Kim Cardenas, Al Laubenstein and Dave Merrill. Helping out on deck were Billy Arcila, Krista Espino, Jim Lieber, and myself. As soon as the divers were set to go, we could see that visibility was going to be a concern. Al agreed to head down the anchor line to see how good or bad it was.

As soon as he jumped in, I noticed that I couldn’t even see his fins. He told me that he couldn’t even see the bottom rung of the dive ladder, 4 feet down…So, we canceled the day’s dives due to bad conditions.

We headed a few miles up the coast of Palos Verdes to see what we could see, and happily discovered two humpback whales making their way in the same direction as us.

This turned out to be a mother and calf. It was the first time any of us had seen a mother calf pair swimming together. They were in such close contact that it looked like they were touching each other. We followed them for several miles. Krista took these great shots of them. On left is the momma; on right is the momma and baby. 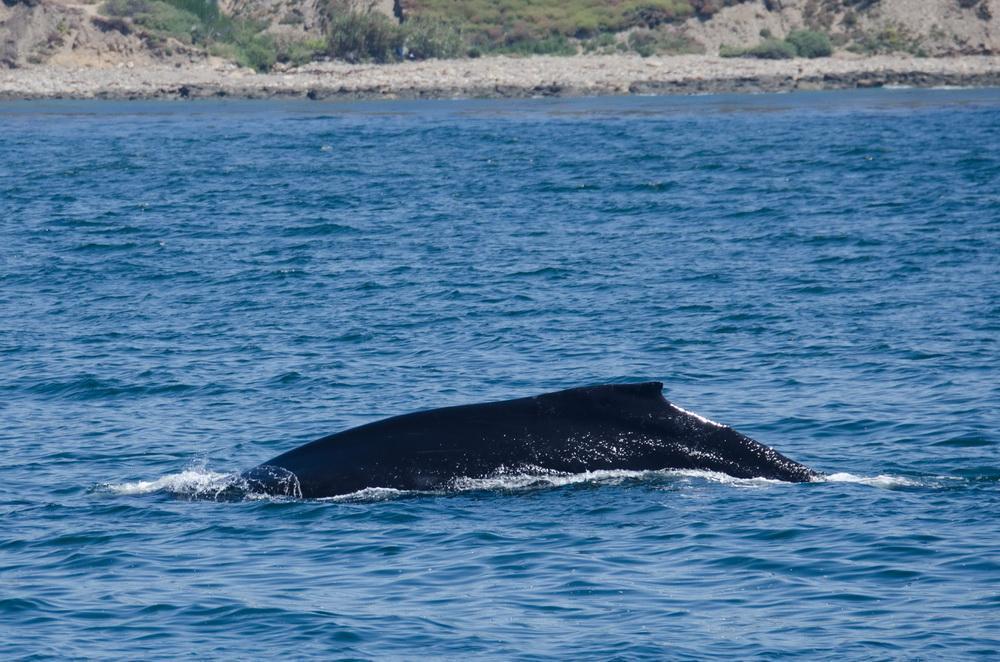 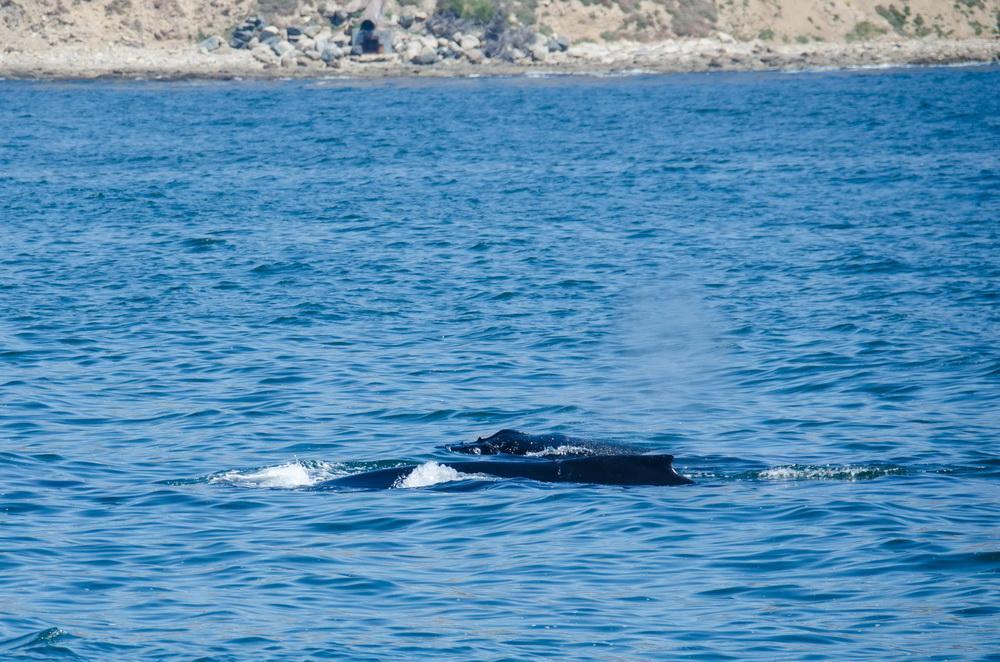 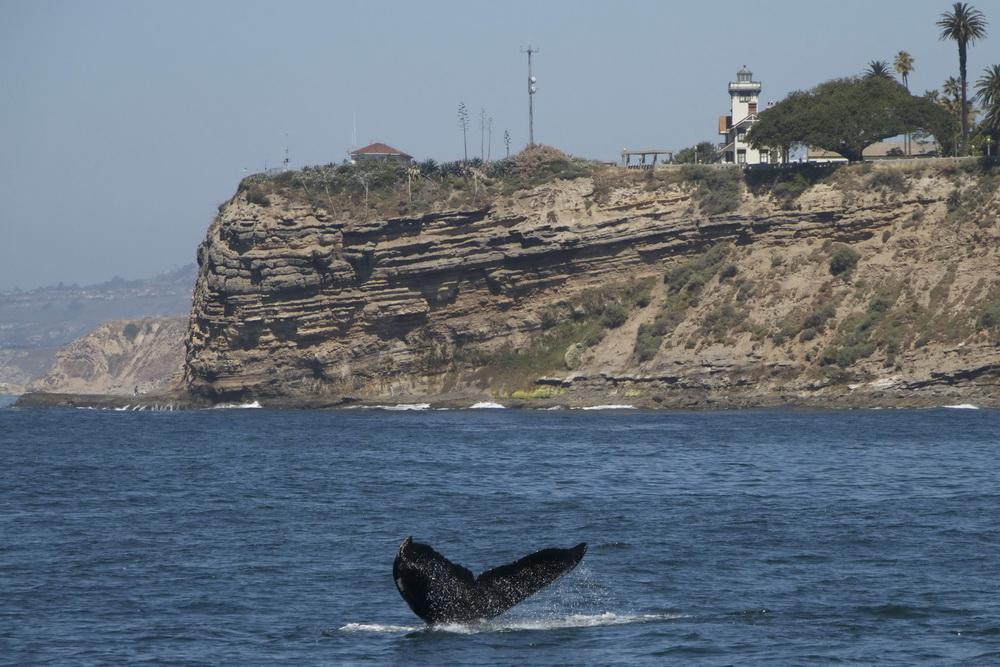 While we were out there, we also were able to remove half a dozen Mylar balloons. 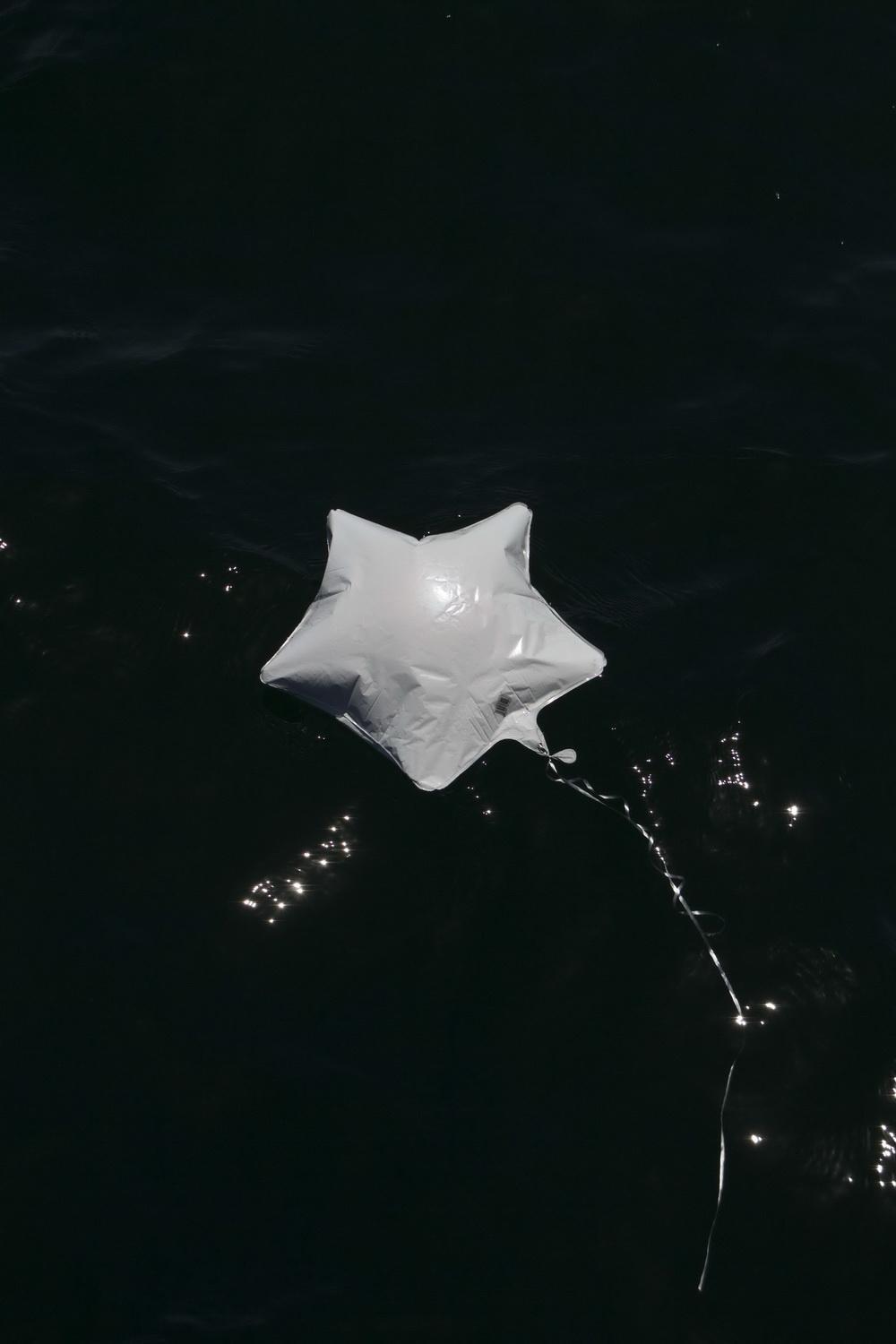 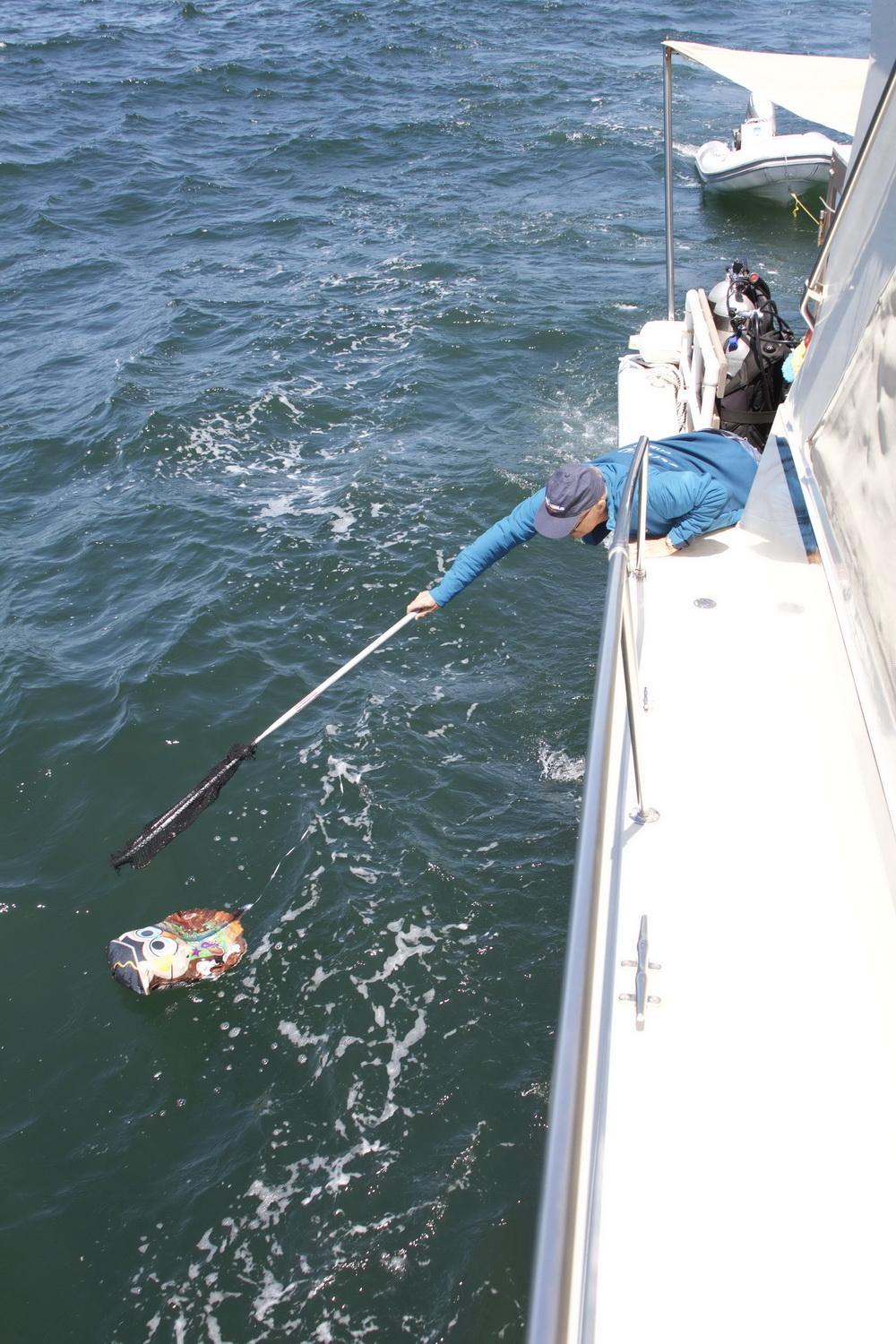 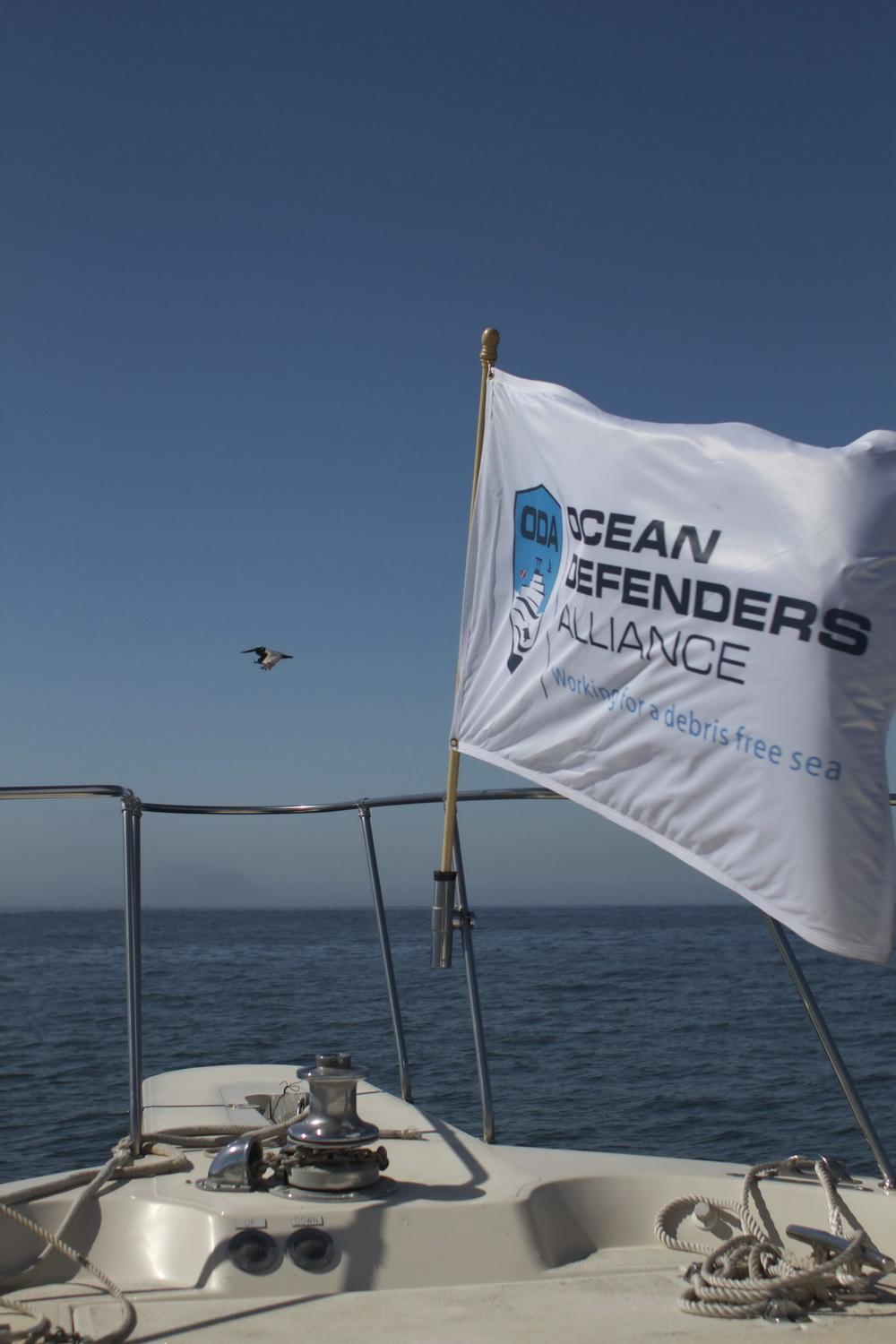 These are super dangerous to marine wildlife who often mistake them for food. At right, check out a pelican flying by our boat (you can click to enlarge the image).

The Orange County Register posted an article about Green Sea Turtles being seen in the Dana Point Harbor. Turtles in the harbor?!?! Yes, you read that right. These are animals that seek out warm waters, and with the oceans warming up, they find Dana Point suitable (temporarily) for their needs.

Knowing that these are rare visitors to our area, I wanted to see them for myself, and make sure people that want to see them as well, are treating them with respect by keeping a safe distance and not altering their behavior.

So, on Tuesday, May 23rd, Linda Nicholes and I trailered one of our small boats down there to see if we could find them. We motored around the harbor for a few hours, and talked to a couple of people who had seen them earlier in the day, but we never did find them. We were treated to a wonderful display of aerial hijinks, by a large flock of Caspian Terns. 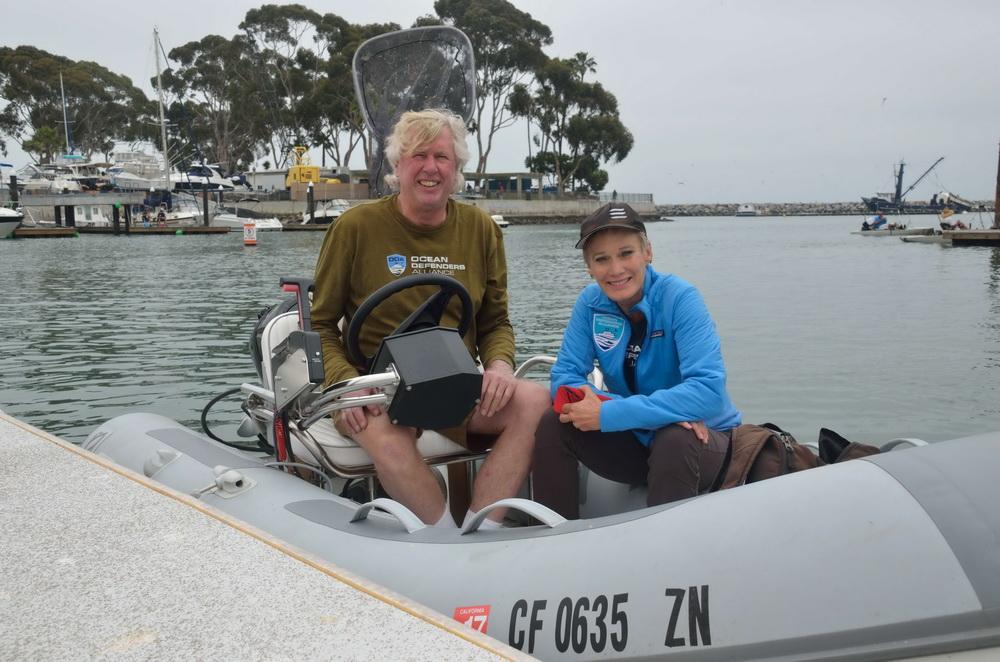 These terns are the largest in the tern family, and are about the size of a seagull. There was a colony of them resting on the breakwall, and they allowed us to approach within roughly 50 feet. Having done volunteer work rescuing brown pelicans for many years, and seeing hundreds of them entangled in fishing lines, I was pleasantly surprised to see none of the terns had any lines on them. 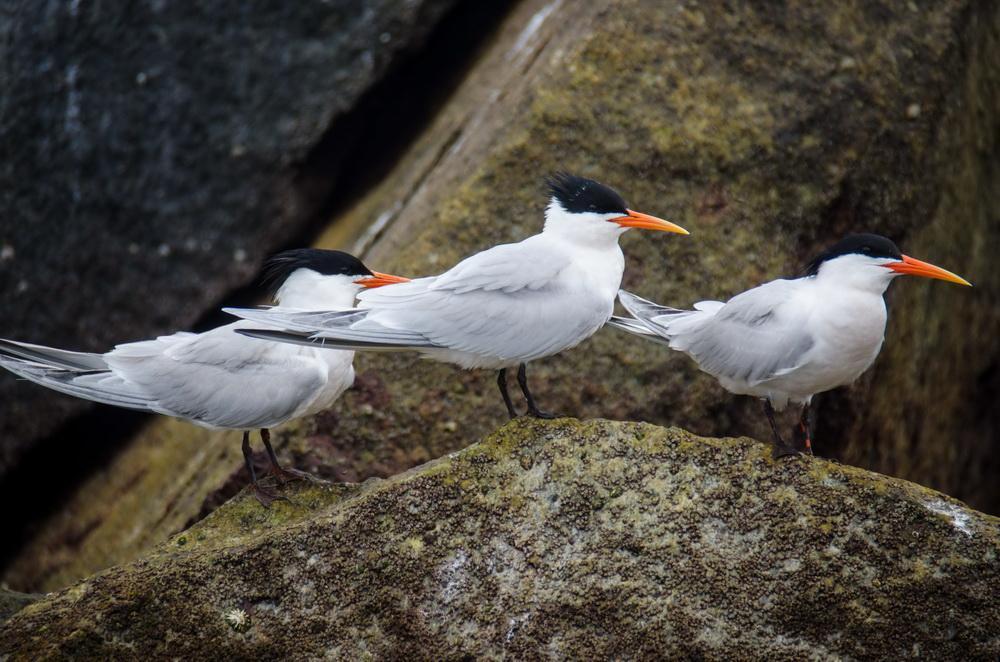 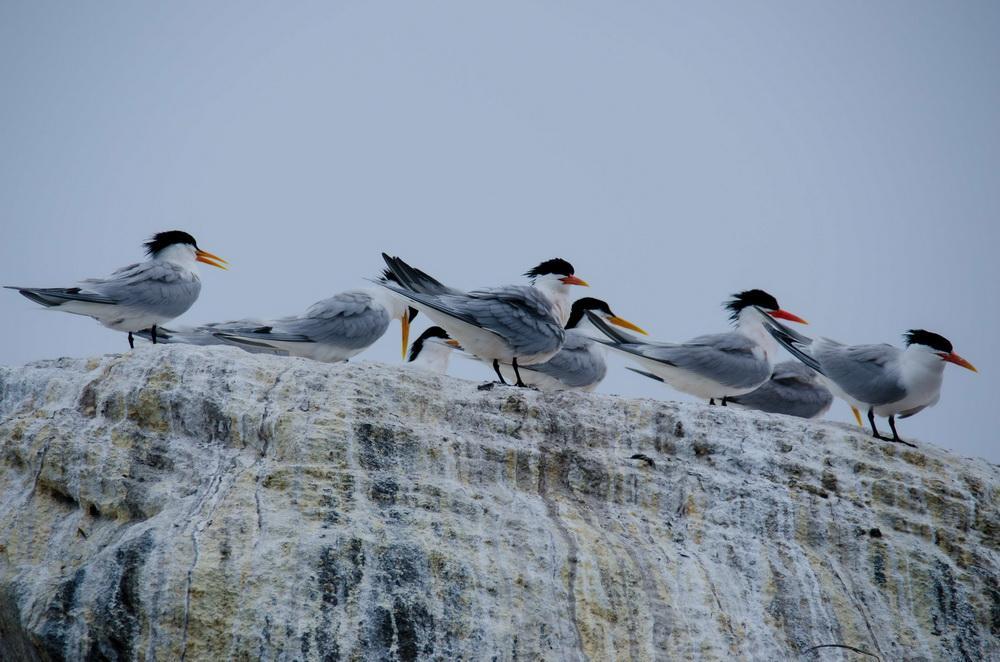 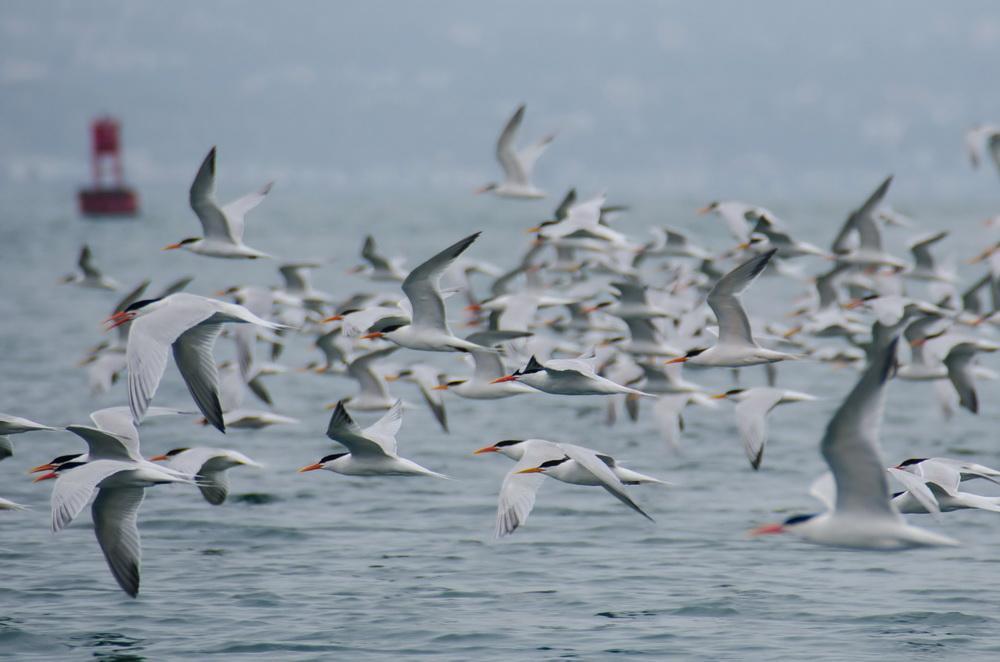 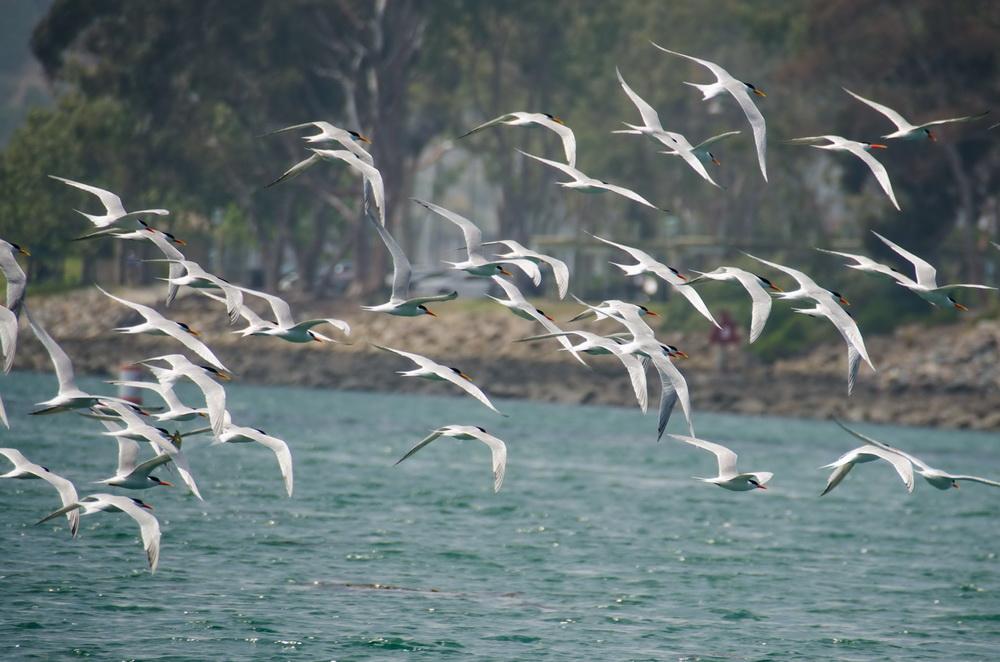 At times, they would rise up off the rocks and form what looked like an ever-changing shape of a cloud. A cloud with hundreds of wings. Majestic to watch.

School’s Not Out Yet!

Daryth Morrisey is a teacher at Vista View Elementary School, in Fountain Valley. She is a science teacher who has salt water in her blood. Walking into her classroom is like entering an aquatic museum. Pictures and figures of marine wildlife take up so much wall space that you can hardly see the walls at all! 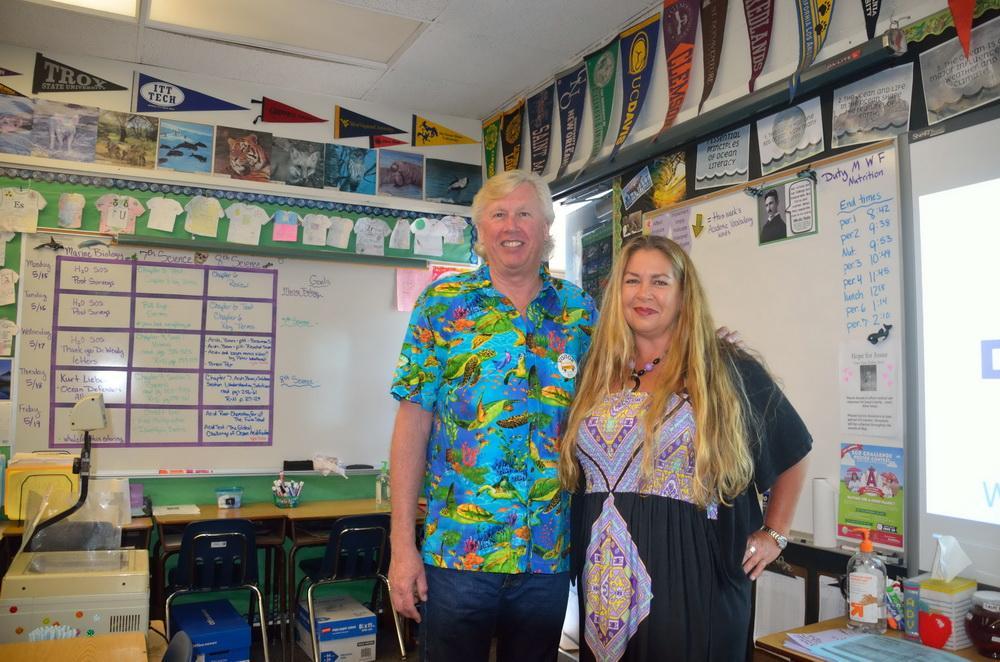 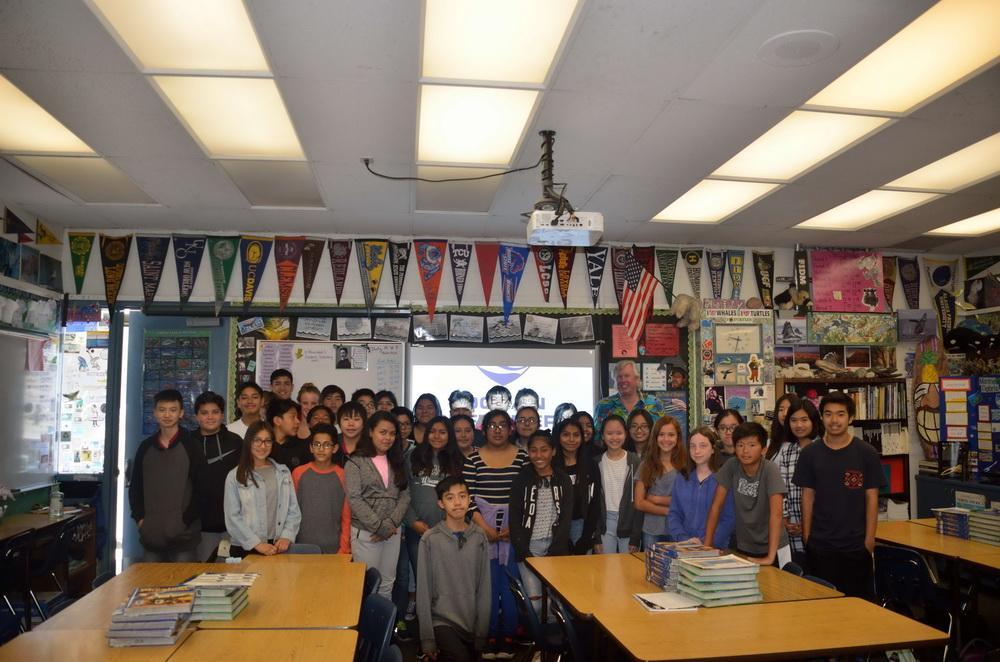 Daryth invited me to give a presentation to her class of 7th and 8th graders. This was my second time in her class, and it is heartening to me to hear the intelligent questions coming from these young people. Daryth really inspires her students during her educating process to not only be aware of nature, but to be keenly aware that the natural world is under assault from humans. They not only get it, they want to do something about it, too. Ocean defenders of the future!

The same day I was giving that presentation, ODA Dive Crew Volunteer Kim Cardenas was giving a presentation to about 40 students at Anacapa School. This is a school that really puts emphasis on ocean education and the students get heavily involved in projects that deal with ocean related issues, from acidification to marine debris.

Kim brought along her underwater scooter to show the kids some of the tools that we use to help us find and remove traps and nets. Kim tells me she had a GREAT time and now wants to do more of this kind of outreach. So, to any of you readers out there in the Ventura/Santa Barbara County areas: Please let us know if you know of any schools or civic groups that want to learn more about ODA.

Because of the holiday weekend, I wasn’t able to enlist enough people to go out on the LegaSea and look for abandoned lobster traps. Not to be deterred, Linda Nicholes and I grabbed our plastic picker-upper tools, and headed to the Bolsa Chica Channel. See the picture below, at right: A snowy egret amongst this trash. Tragic! 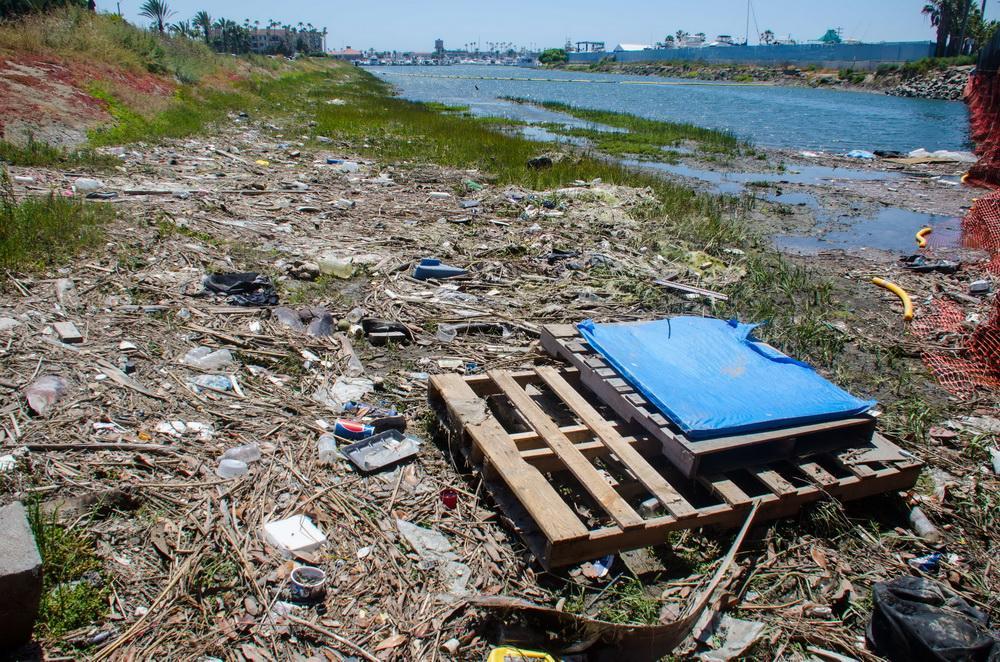 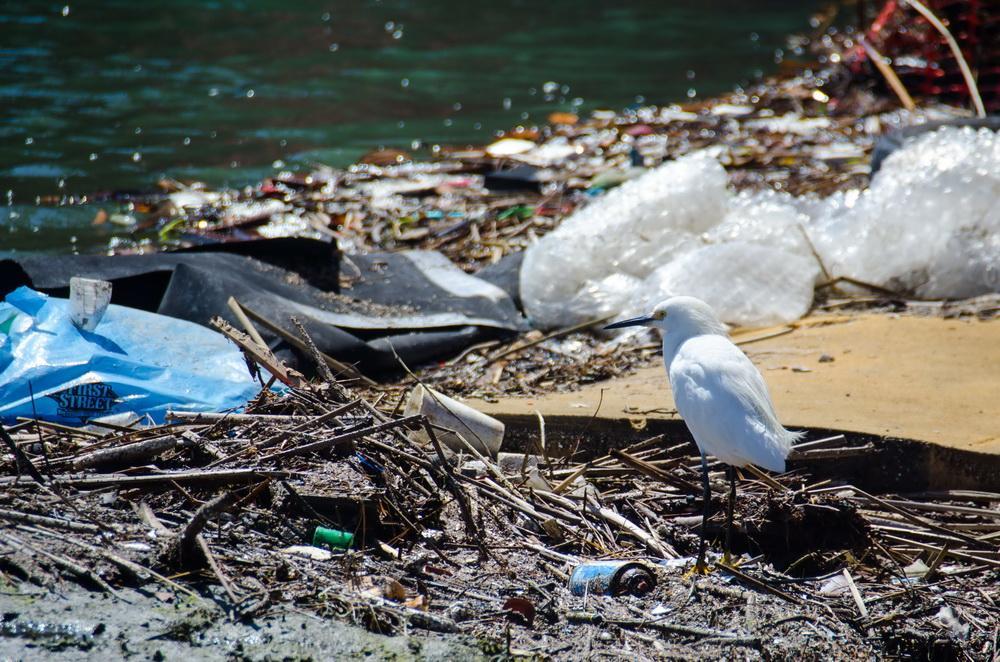 This is a man-made water channel that runs from the mountains all the way down to Huntington Harbor. We have cleaned this site up a few times this year, and I was dismayed at how much plastics have found their way there again. How does this happen without any rains to wash it down the channel? I don’t really know. But, there it was…

Linda and I spent three hours cleaning the area up, and there was so much stuff there that I don’t think we moved more than 50 feet from where we started. We found oodles and oodles of polystyrene plates, cups and food holders, lighters, single use bags, syringes, toys, toothbrushes, straws…in addition to all that, we found a foam rubber mattress that was in the water. We tried to pull it out, but because it was so saturated with water, we could only move it three feet! It easily weighed over 200 pounds. We were only able to remove it after we allowed a lot of water to drain out of it. 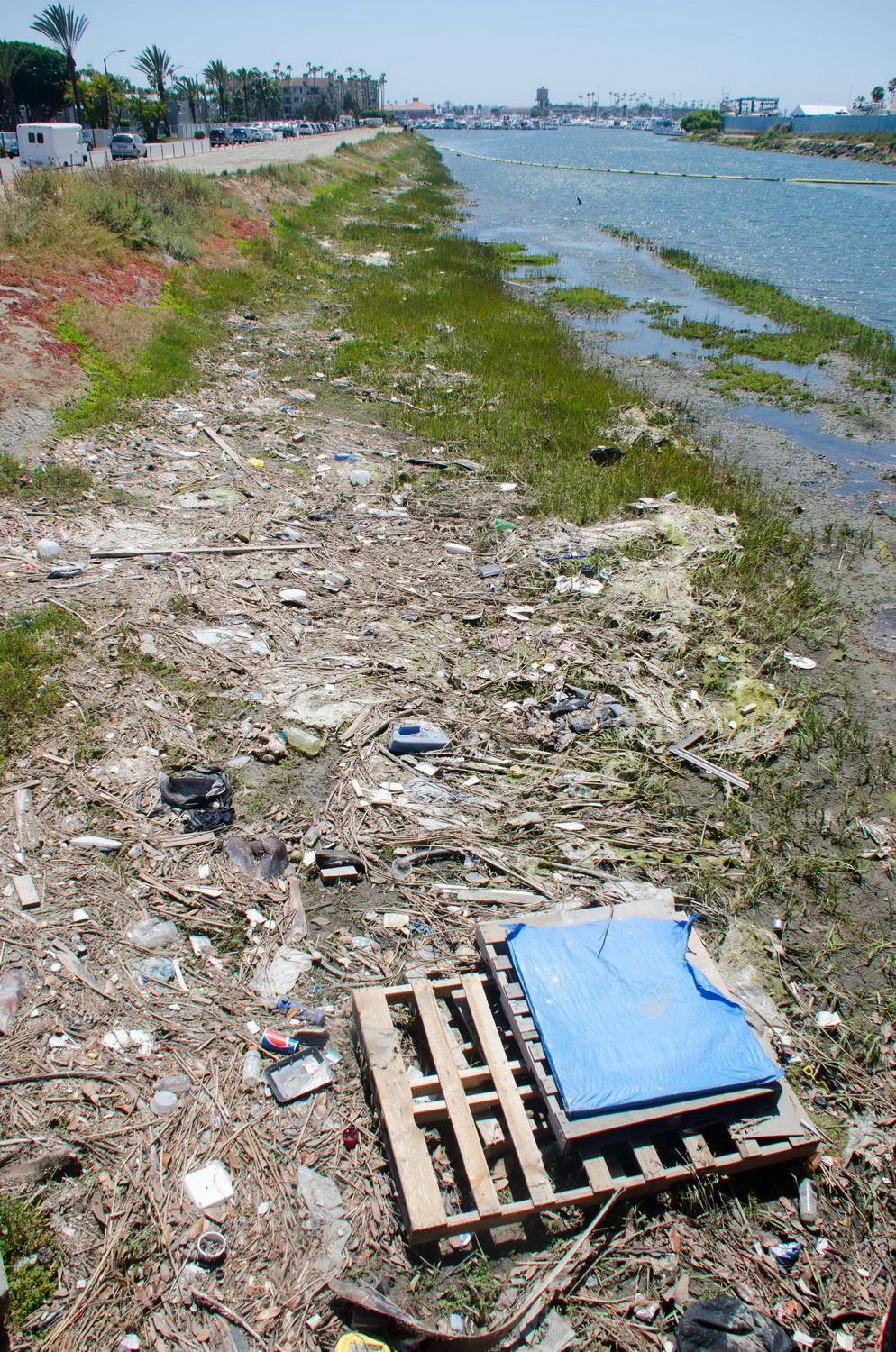 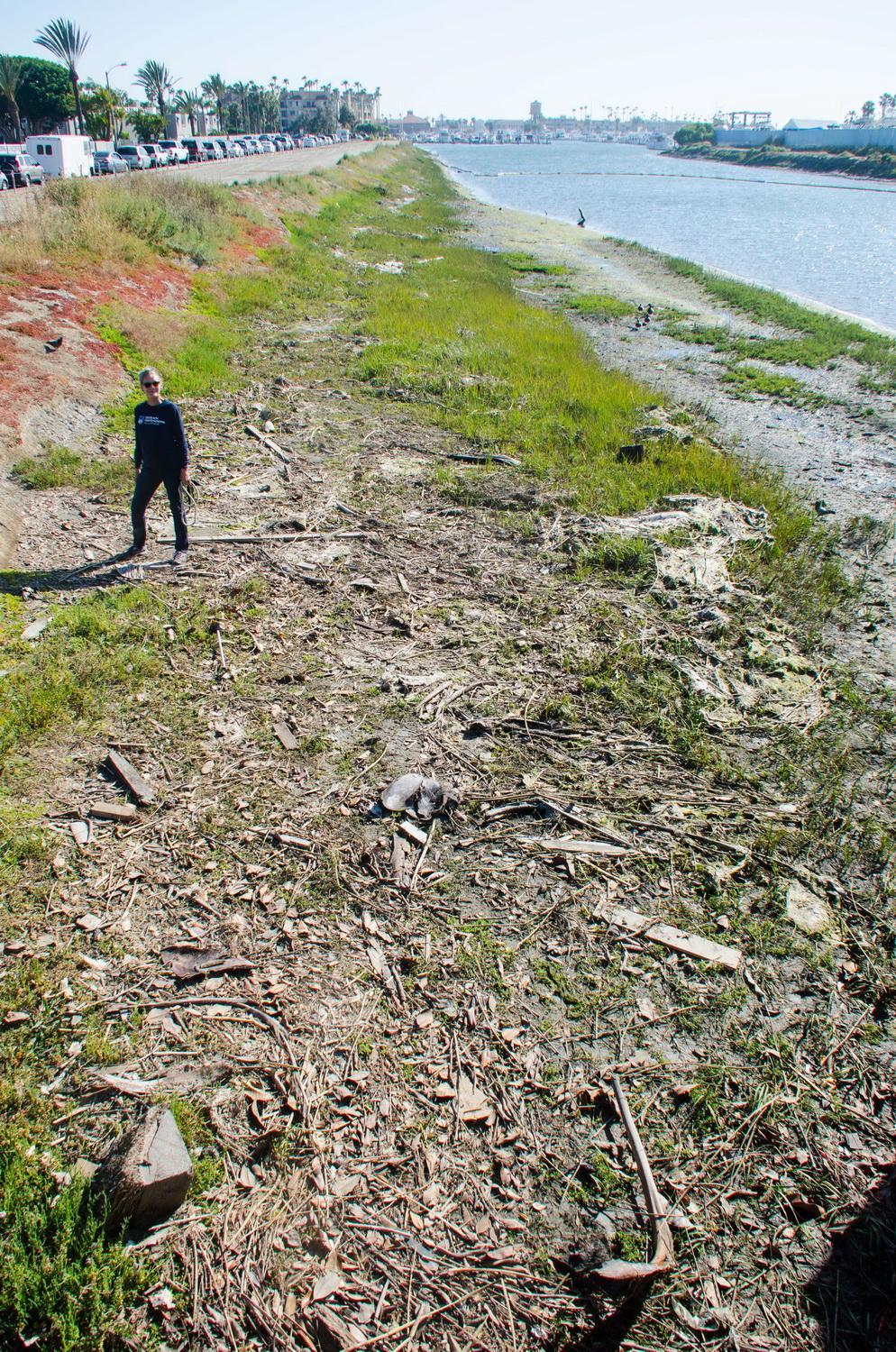 There was also a car tire bobbing on the water’s surface, which I tried to lasso, but guess my wrangling days are behind me. Couldn’t reach it. Not far away was an office chair that had somehow positioned itself upright, in the middle of the water. No longer though; we tied a rope to it and hauled it out. As Linda and I were calling it a day and putting the trash in the truck, a group of Mallards came by to inspect our cleanup efforts. AND, I suspect they were thanking us as well. 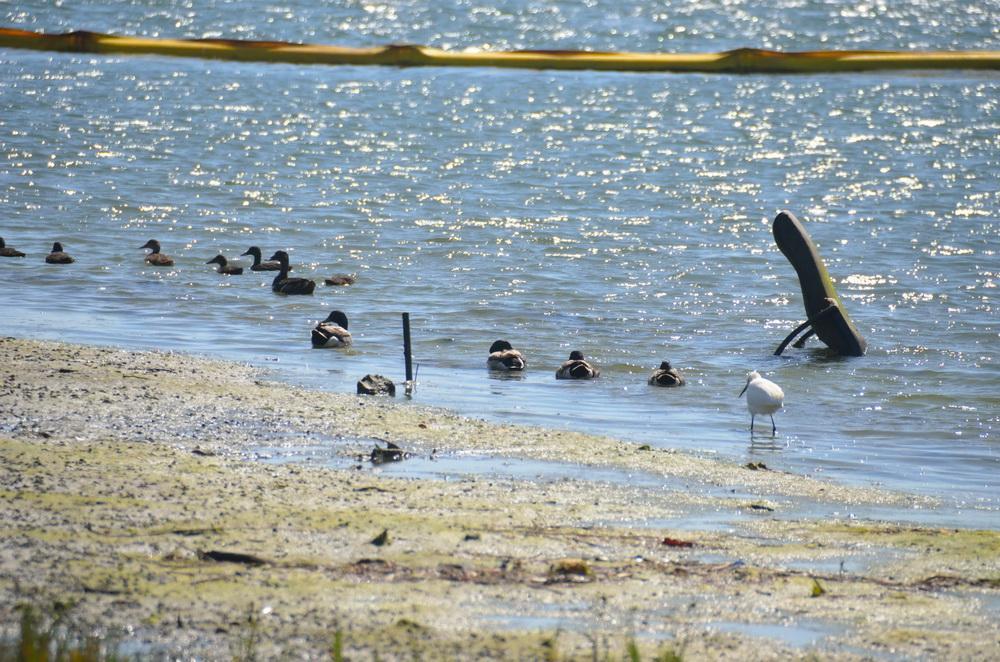 In the end, we removed about 600 pounds of debris. While it is disheartening to see so much garbage in our waters, I feel terrible for the wildlife that calls these waters home. They are getting sick from all the pollution they are surrounded by. But keep in mind: we are doing it to ourselves as well. 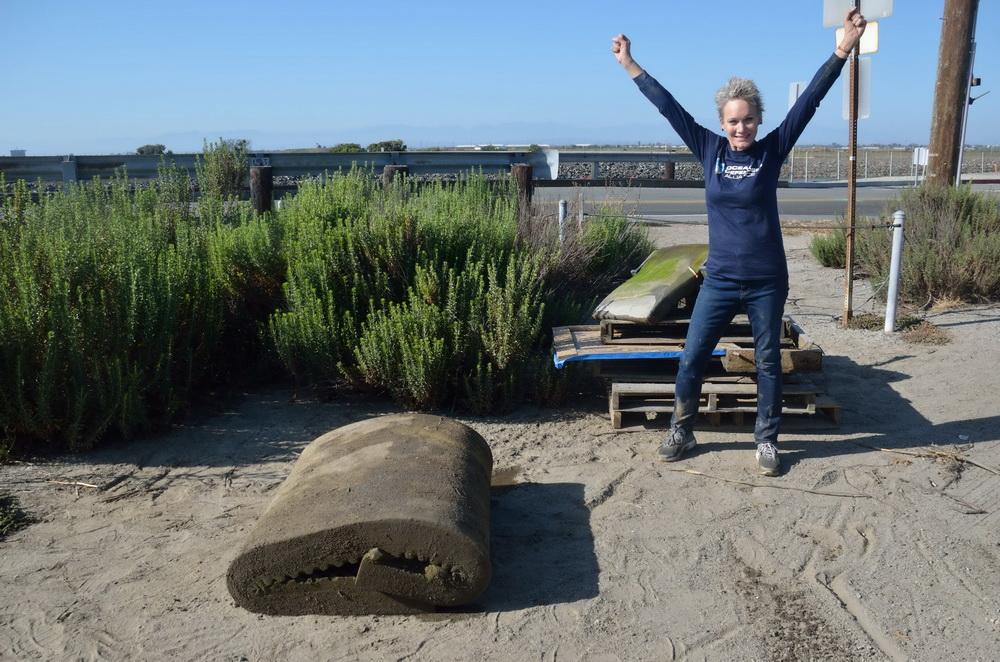 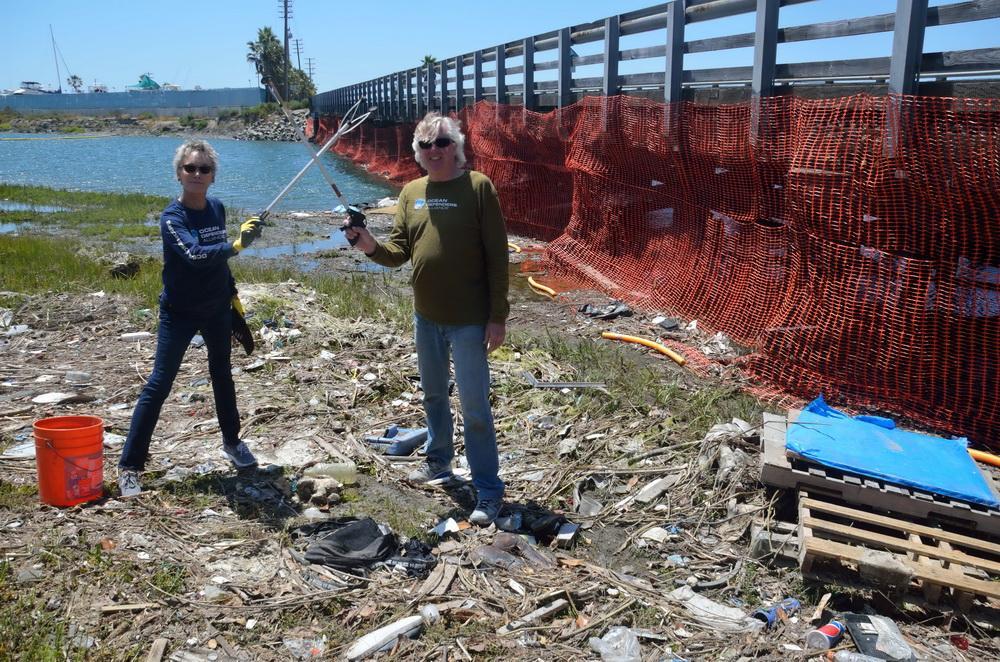 The plastic pollution is a worldwide issue, and at times it feels there is nothing we can do as individuals that is going to make a dent in the problem. But, I can guarantee you, if we do nothing, absolutely nothing will change.

There are two kinds of people in this world:

Some people live their lives, waiting to die.

Other people live to make a better tomorrow, today.

I hope you are in the latter group. If so, come join us at ODA and let’s make a difference today for tomorrow. :)