Barging in on Destruction 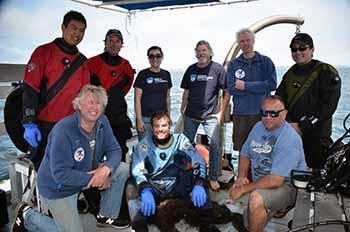 ODA Dive & Boat Crew on the Clearwater - left to right
standing: Andy The, Steve Millington, Beth Deck, Jeff Connor,
Jim Lieber, and Shingo Ishida. Left to right, Kneeling: Kurt Lieber, Eric Humphreys, and Mike Jessen.The end of March is always eagerly anticipated by all of us here at Ocean Defenders Alliance. Along with the start of a warmer season, it brings the end of the lobster-hunting season—both of which allow ODA to accelerate our trap and line removal activities. While we allow lobster fishermen an extra 2-week grace period from the end of the season (March 31) to remove their gear, we continue removing nets from sites all across Southern California.

On Sunday, March 31st, our team headed to the coast off Huntington Beach to remove net from a site we had been working on since early January. The site is called Savino’s Barge, and serves as an artificial reef. We motored from our slip in San Pedro under very cloudy skies, with not a hint of sunlight peeking through.

Even though the skies were gray, our mood was upbeat because we were glad to experience the beginning of spring and the end of winter storms that keep us in harbor more than we would like. Our excited crew filled the boat! We had four divers: Andy The, Eric Humphreys, Shingo Ishida, and Steve Millington. Our boat crew was comprised of Beth Deck, Jeff Connor, Jim Lieber, Mike Jessen, and myself as captain. Also, along for this expedition was a freelance reporter named Lindsey Mastis. 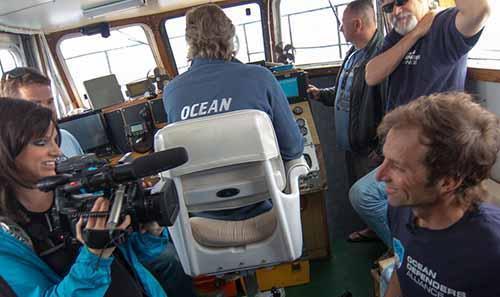 It is rare for us to have more boat crew than divers, but it happened this time when two divers had to cancel at the last minute due to personal emergencies. We missed you Pete and Trevor! 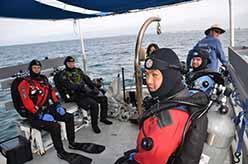 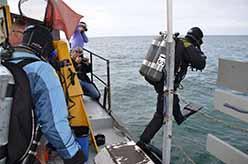 Dive conditions were great, with 20-foot visibility, calm seas, and a mild current…but that was before Steve, Andy, Eric, and Shingo started cutting net. As soon as they started cutting—visibility was reduced to near zero as particles from the nets and ocean floor “bloom” all around the divers.

We had two dives down to about 65 feet, and removed a large chunk of net that was caught on the wreck. There were 3 different types of netting on it; most being squid net—the stuff that is made out of nylon and lasts for centuries in the water. 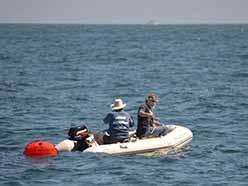 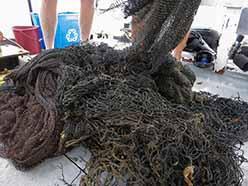 It was a great day. We successfully removed about 200 pounds of netting, along with some metal chains and two anchors. The divers determined that we’ve removed nearly all of the debris from this site, so we won’t be going back there anytime soon unless we hear about another net getting snagged on it. Lets hope that doesn’t happen anytime soon, but if it does: Ocean Defenders Alliance will dive in to remove it! 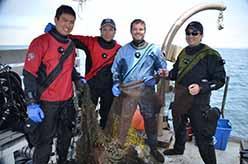 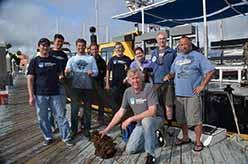 Along with the dedication of our volunteer boat and dive crews, donations from our supporters allow us to accomplish these successful outings. Please consider a donation to ODA today! 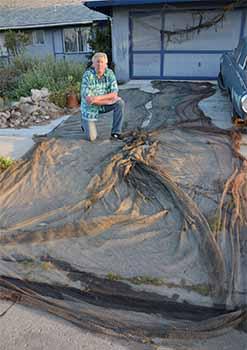 Back on the homefront, I thought I would stretch out a big piece of the squid net to see what amount of space it covers - turned out to be approximately 80 feet long (shown here doubled over, hence covering about 40 feet of my driveway)! I also hung some "lovely" remnants on the garage.

Even after the fishing industry is "done" with a squid net, this type of net is very dangerous to marine life. Small critters such as crabs easily get caught and die in it, and then larger animals such as a seal may come to feed on the crab and get a flipper  caught, which leads to its death as well. It is sobering to think about the amount of sea life that dies because of these abandoned and lost nets.

ODA is committed to cleaning as much of the coastal waterways as possible. With your help, we can keep our boat and crews at sea doing what we do best!