Perilous migration and feeding routes for whales are getting worse.

In an article just released by the Canadian Broadcast Company, it was revealed that the west coast of Canada is seeing a huge spike in whale entanglement incidences.

Why Is This Happening?

It has been hypothesized by scientists that because the oceans are warming and there is less ice cover in the Arctic, that the fish are migrating farther north than has been typical.

Therefore, the animals that prey on them, our beloved whales, are following their food source.

Add to that the fact that lobster and crab traps are now being set in areas where these migrating whales spend more time, whale entanglements are happening a lot more frequently. 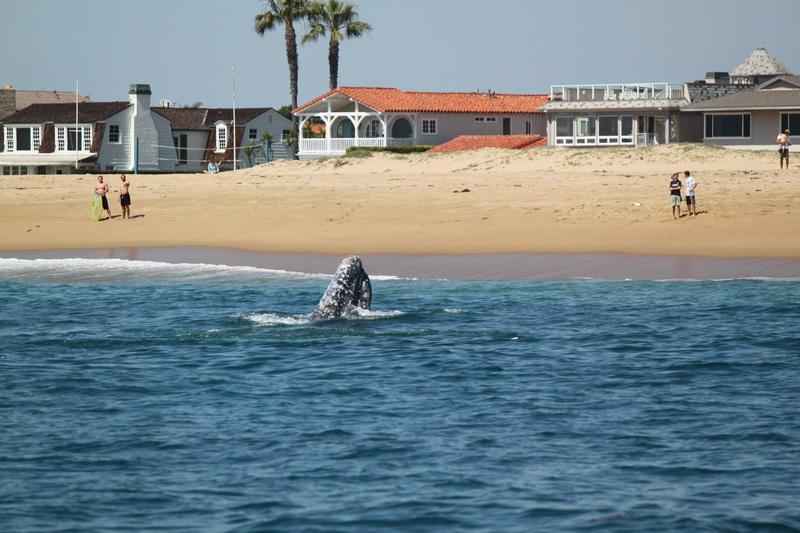 Whales Affected Along the Entire West Coast of North America

Similarly, along the west coast of the US, (California, Oregon and Washington), we have experienced a huge spike in whale entanglements. Up until 2013, there were 10-12 confirmed incidences happening per year. Then, the number started to climb to the point where there have been 67 confirmed entanglements this year!

And, as this article points out, there is no doubt that these numbers are not a true picture because most of the entangled whales sink to the sea floor before they can be counted. To ODA, this is a tragedy! 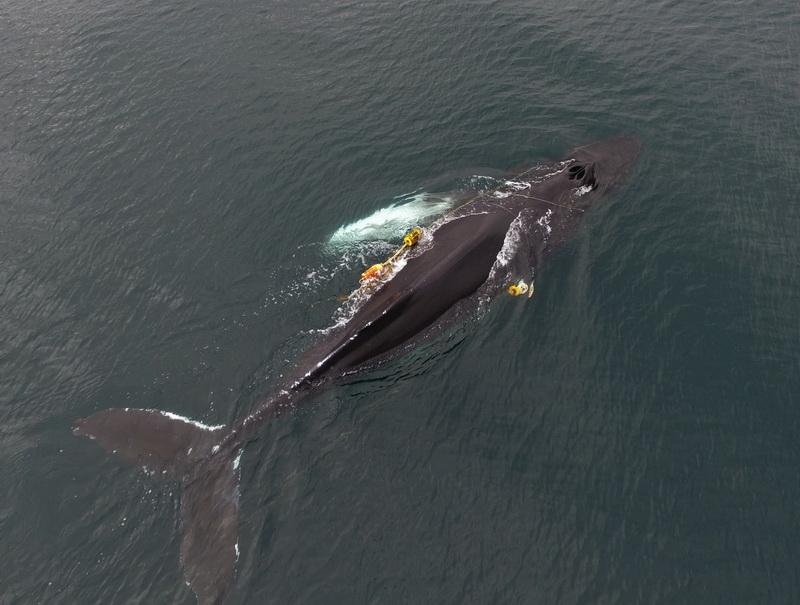 Government agencies are all in agreement about the fact that high percentages of whales are coming into contact with abandoned fishing gear. The Canadian Fisheries Department states that 47% of humpback whales show signs of entanglement, and in a report issued in 2014, NOAA estimates that number to be 80% in US waters.

Whatever the numbers are, they are very disturbing.

People often ask me why the whales can’t just navigate their way around these traps and trap lines.

Well, baleen whales (e.g., humpback and gray) don’t use sonar like toothed whales (e.g., orca and sperm) do, so they absolutely have no way of knowing there is a manmade object in the water. 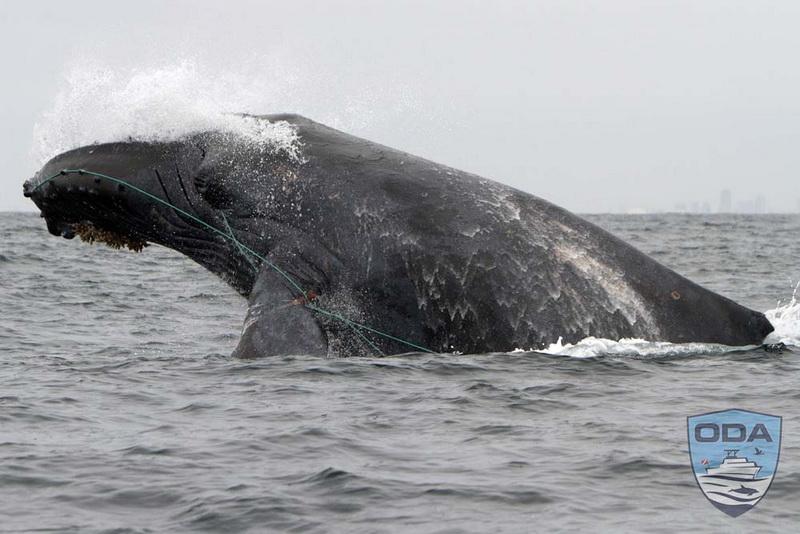 The no-sonar issue is further complicated when the whales must swim between lobster traps that are set 20-50 feet apart. Each trap has a rope line that floats vertically to the surface where it is attached to a buoy. There can be as few as 10, but up to 200 of these traps in a row! When one looks at this lineup of traps, you can't help but wonder, "How in the world do any whales navigate through this gauntlet of floating lines without becoming entangled? Well, the answer is: They often don’t make it through.

ODA is Doing Something About It!

Because we at ODA know that there are areas of our coastal waters that have a high concentration of traps set (usually lobster and crab), we are documenting these areas and creating a map that shows the insanity of allowing these many traps to be set so close together.

Following is a map we created which shows an area where we recorded GPS (Global Positioning System) locations of each individual trap that had been set. We documented 180 traps set almost in a straight line off the coast of Palos Verdes, CA. When this was shown to the California Department of Fish and Wildlife (CA DF&W), as well as to some officials at NOAA, they were floored. They had no idea that it was this bad. 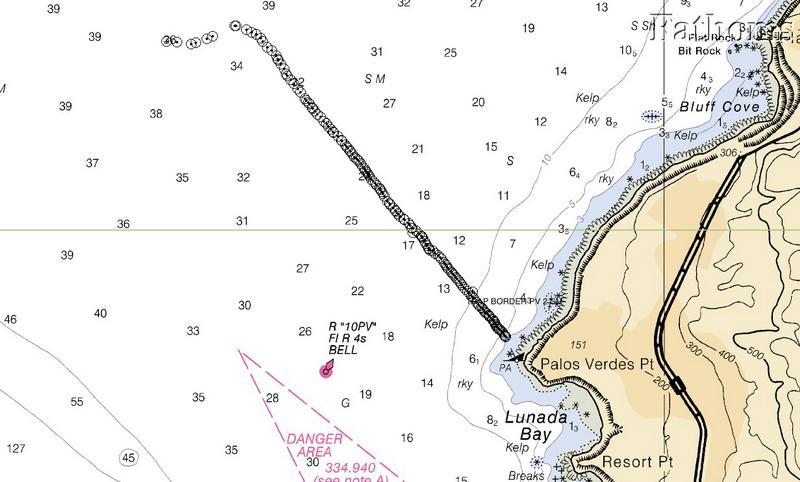 Our intention at ODA is to use the documentation to push for change in fishing regulations so that such traps would be required, by law, to be set farther apart.

Combined with our trap-and-line-removal efforts on the “back end” of this issue, our actions to change the trapping laws will amend fishing requirements in favor of our beloved marine mammals. We believe it is important to address this issue at its source (on the “front end”) at the same time that we work actively in the field to make these areas safe for marine life.

On November 26th, with the help of a nonprofit organization called LightHawk, pilot Robert Lange took ODA crewmember Jim Lieber and me on a flight in his personal plane. We went from Newport Beach down to San Diego and then over Catalina Island looking for the high concentration trap areas. Thanks to Robert’s expert flying, we were able to locate several areas with high concentrations of traps. 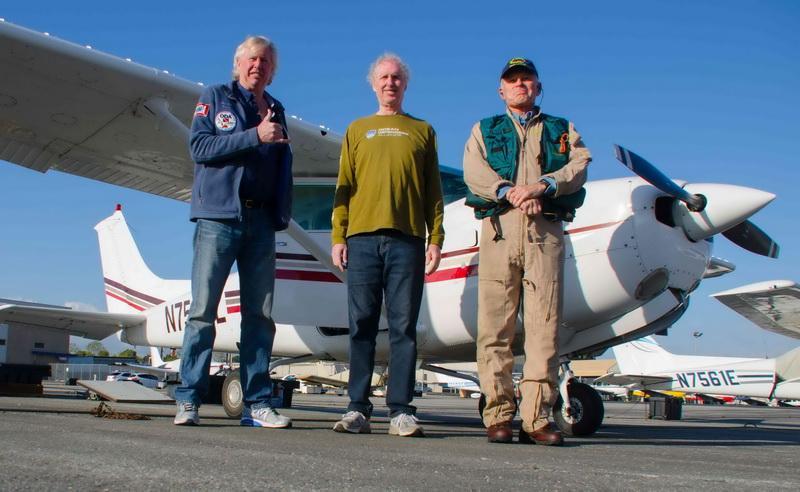 We will return to these locations via boat so that we can GPS mark the individual traps and create more of these informative maps. Knowing the location of the traps is helpful, too, because after the legal fishing season is over we know where to go to look for abandoned traps.

LightHawk is an awesome group of pilots who donate their time, planes, and expertise to conservation groups that can put aerial surveys to good use for their projects. This is exactly what ODA needs. Thank you LightHawk and Robert Lange for helping us get this invaluable information to defend the oceans!

We Continue to Fight from Multiple Angles

Each one of these whale deaths feels like a punch in my heart. And if you are an ODA volunteer or supporter, I’m sure you feel the same way.

That said, I hope it cheers you up to know that just last month we removed nine abandoned lobster traps and over 800 feet of trap lines. 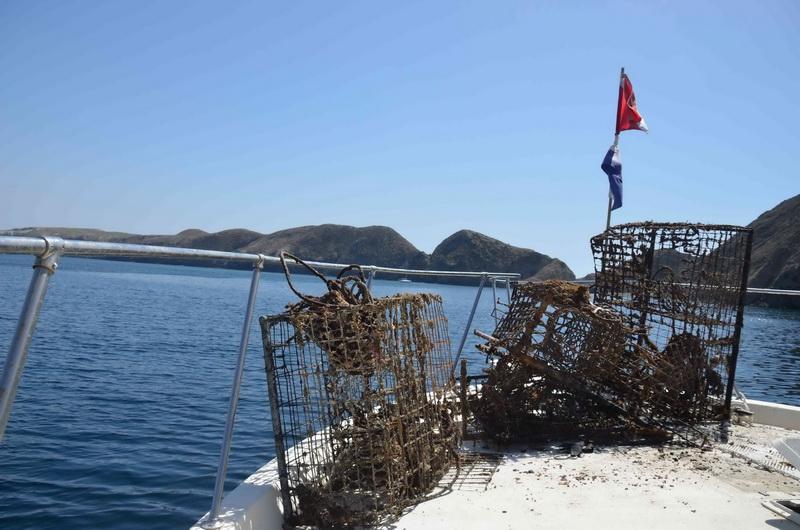 Thank you for spreading the word about ODA’s efforts to rid our waters of these potentially deadly obstacles to a vibrant and healthy whale population. You are the voice and the hope for these defenseless gentle giants!

Please use the "share" buttons just below the photo gallery!