She's baaaaack!!!It appears the recent string of trials and tribulations of our flagship the Mr. Barker’s LegaSea may finally be over!

We got the generator back up and running, and the fuel leak in the engine compartment mysteriously stopped. We won’t question our good fortune. ????

Cleaning the Wreckage on a Wreck

With that good news, a few of our dedicated ocean defenders met at the boat in San Pedro on Sunday, June 30th and headed to a site we’ve been to a few times where ghost fishing gear regularly attaches itself to a sunken boat.  Our hope is to remove any newly affixed nets and fishing lines before they have a chance to trap and entangle ocean wildlife trying to swim by.

Divers for this day were: Al Laubenstein, Bill Maley, Shani Tennyson, and Geoff Walsh.  Lisa Davis and Brooke LaDouceur filled out the roster by helping with deck and diver support. 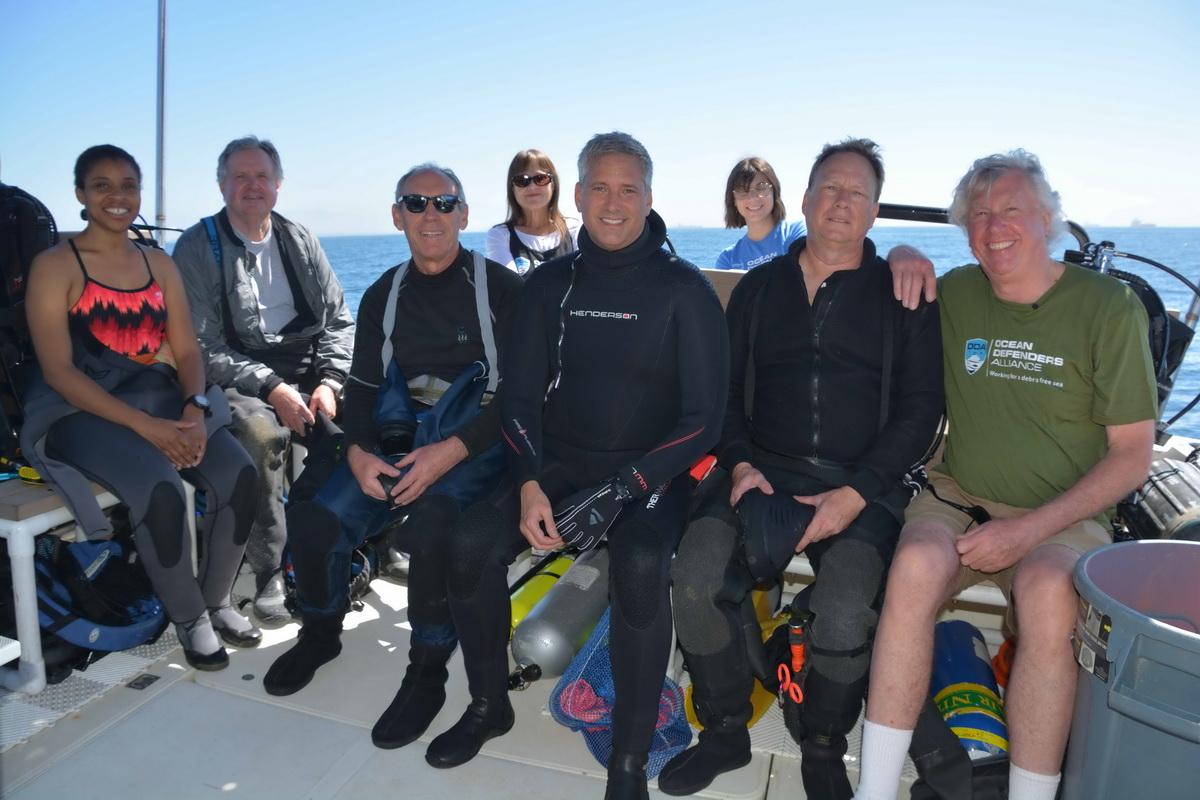 In addition to our stellar crew, we were joined by three people from a group called Compassion Over Killing.  Todd Kortte (diver and UW videographer), Scott David, and Jonathan flew in from Washington DC to cover ODA’s story for a documentary they are creating that deals with the subject of overfishing. 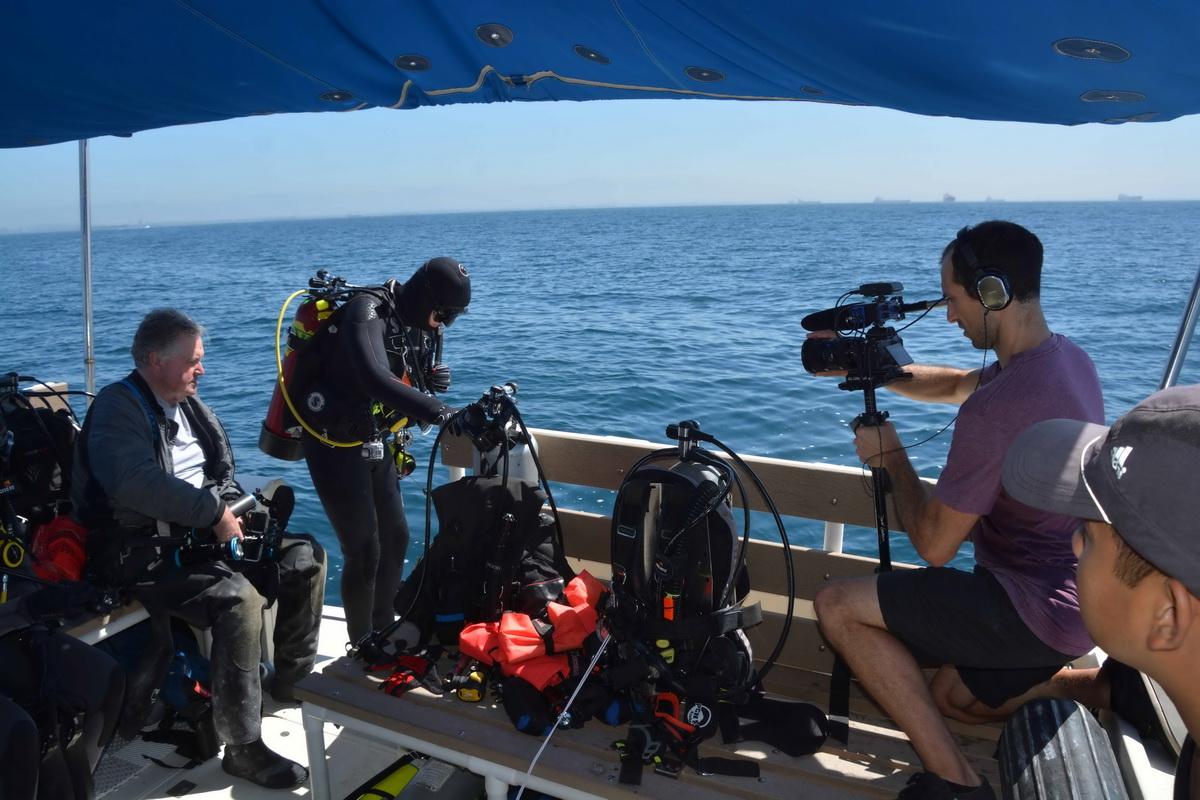 As we headed out the seas were almost like glass, with nary a two-foot wave to complain about.  A great day to have our esteemed guests onboard.

Veteran Crew Do Their Thing

When we got to the site, Lisa dropped the anchor about 20 feet away from the wreck, which was 75 feet down.  Nice drop, Lisa!

Shani and Todd jumped in first, with the plan to give them a few minutes to film the site before the other divers got to work. The net-removing would obliterate the underwater (UW) visibility by stirring up the mud and sand on the abandoned fishing net thereby reducing the visibility (vis) to less than two feet.

As the two of them started to descend down the anchor chain, I could see that Shani was having issues and couldn’t get down.  She surfaced a few minutes later and said that her sinuses were preventing her from getting any deeper than 20 feet.  Sorry you couldn’t dive this time, Shani!  Next time! 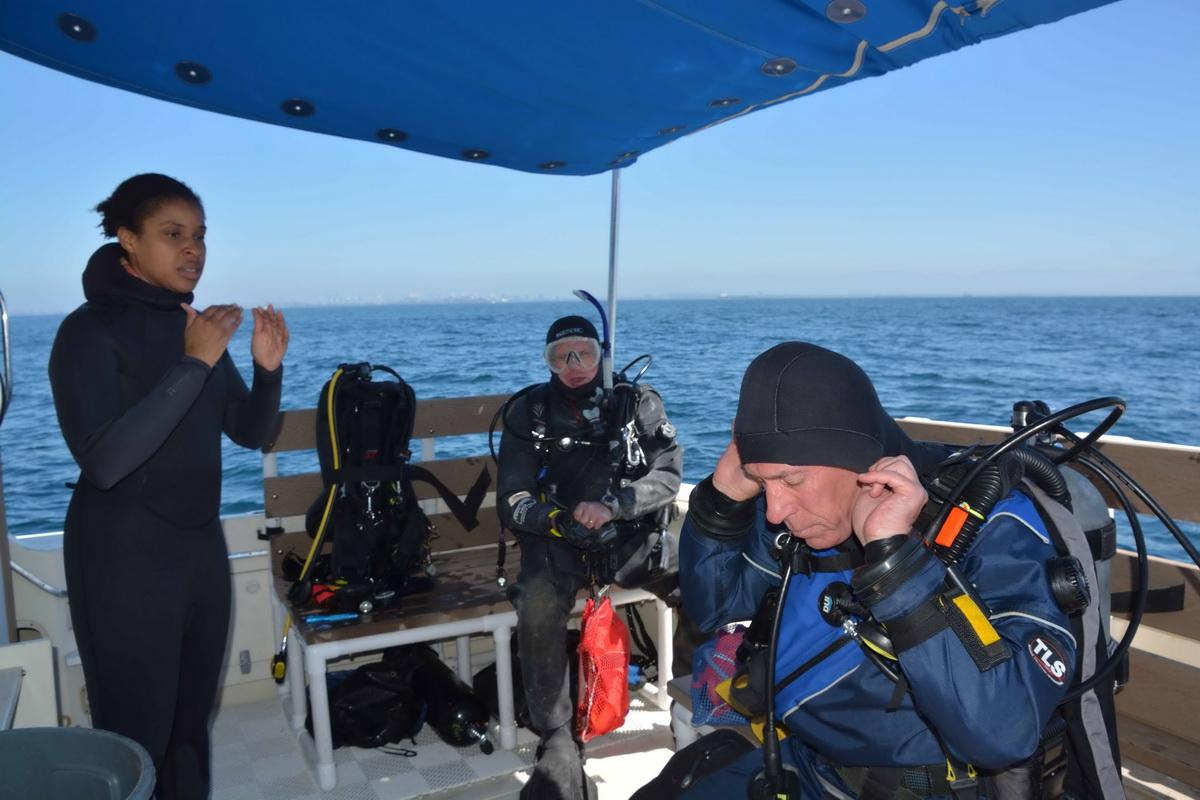 So, she got back on the boat, while Bill jumped in with his dive gear, and soon he and Todd were heading down. 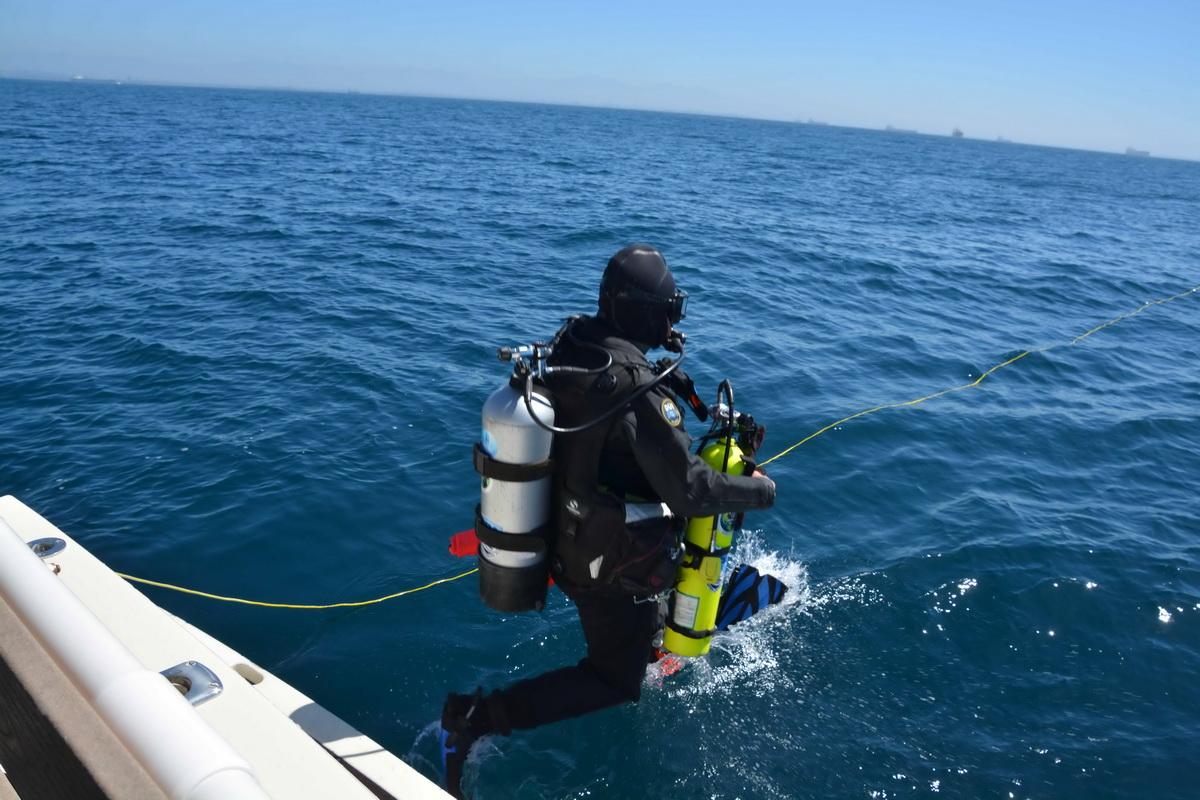 Five minutes later Al and Geoff dropped down to meet them.  After about 15 minutes, we saw a lift bag break the surface.  Yahoo! This means the divers had successfully freed some fishing net and attached to the lift bag to send it to the surface. Sure enough, some net was hanging from it.  The current was starting to pick up and carry the lift bag past the boat.  That is when Scott put his snorkeling gear on and tried to swim over to the fast-moving lift bag.  To no avail, it just got too far away. 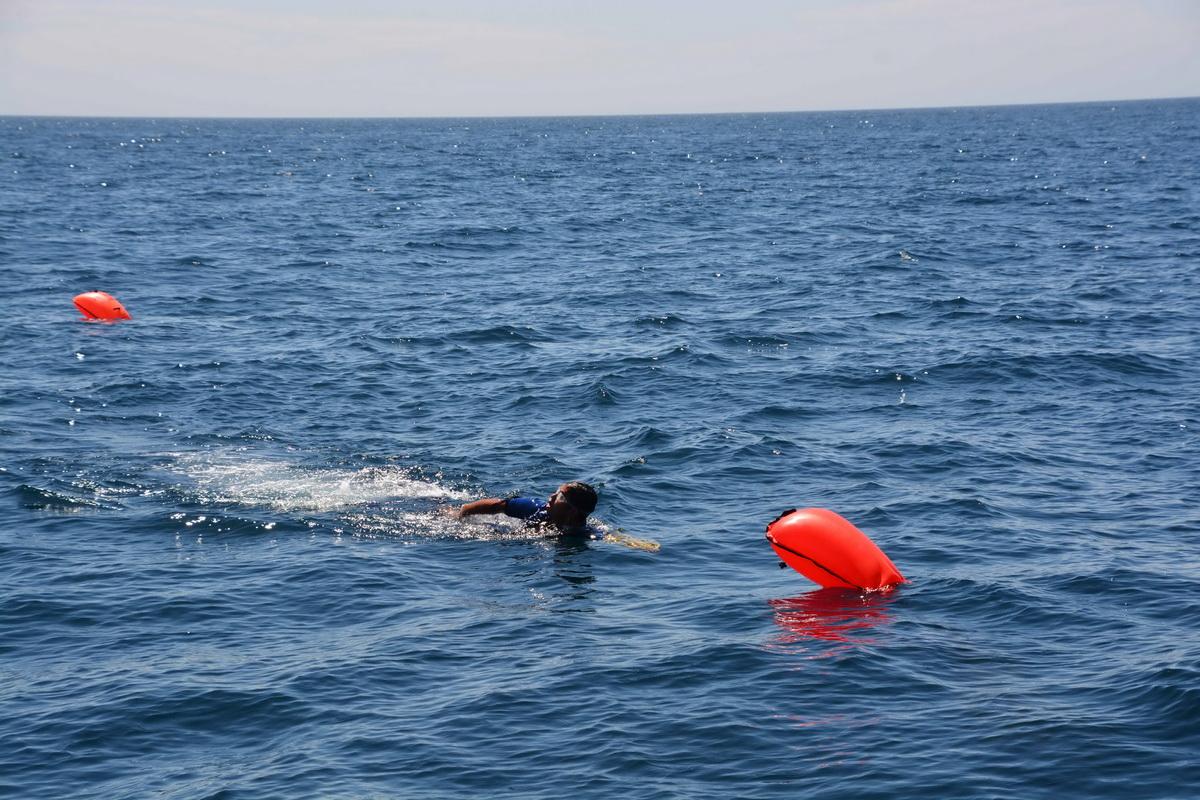 On his way back to the boat, another lift bag was moving right towards him.  He nabbed that one and dragged it over to the LegaSea. 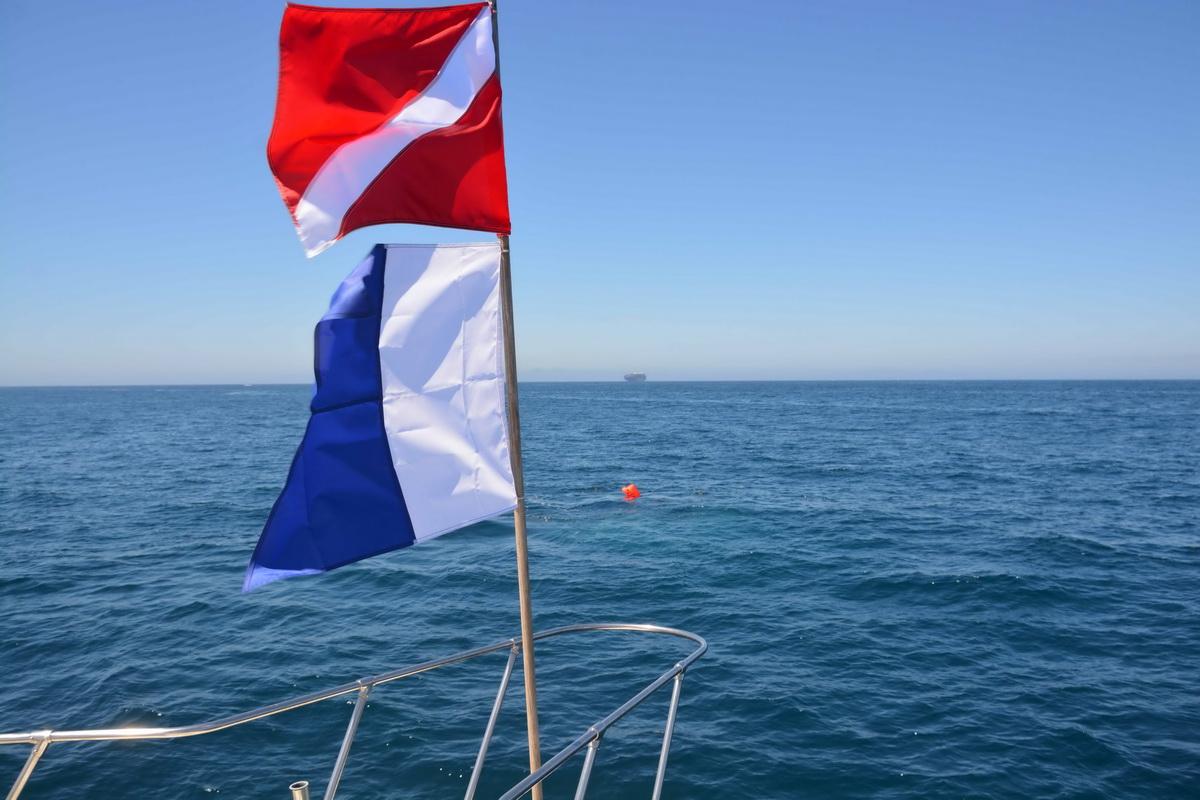 Once Scott was back on the boat safely, Lisa and Brooke hauled the net in.

Here's a short video of the net removal work by Todd:

Next, the four-member dive team came back up the anchor chain, and they climbed back aboard the boat.  They excitedly relayed to us how great the UW vis was, between 30 and 40 feet!  Very rare to have that kind of vis for this area.

With the divers back onboard, we talked about how best to approach the second dive and had some time to warm up and talk “big fish” stories.  They were awed by a couple of lingcod they saw, as well as several male sheephead.  The lingcod can get over five feet long, and the sheephead to around three feet.  Sorry, but we didn’t get any UW pictures to show you…

After that one-and-a-half-hour break on the boat (called a “surface interval” in dive speak), Todd, Al, Bill, and Geoff jumped in again and tried to head up to the anchor chain.

But by this time the current was so strong I had to hand them a rope to hang onto while I held onto the other end and walked up the side of the boat, dragging them through the current to the chain at the bow (the front end of the boat). As eluded to above, the divers use the anchor chain to guide them to ocean floor.

Because the conditions had gotten so bad, each diver dropped down as soon as they could, and waited for the others to join them while they hung on the chain 30 feet down.

But, soon, within five minutes, each one surfaced and said the boat had dragged the anchor so far that they couldn’t even see the wreck when they hit the bottom.

We then decided to call it a day, pulled up the anchor, and began to search for the first lift bag that had come up, the one that Scott couldn’t catch up to and grab.  We motored down current and found the wayward lift bag.  It was 1.9 miles from where we had first seen it.  Wow, that current sure picked up steam quickly!

Both Debris and Film “In the Can”

While we hauled out marine debris to put into a proper garbage can, the Compassion Over Killing crew got some good video footage and still photographs. We sure wish them all the best on their documentary! We support their efforts to educate the public about overfishing and the lasting effects of it—which include massive amounts of lost fishing gear in the ocean continuing to entangle, trap, and kill precious wildlife. But as long as ODA’s around, we’ll be working to reduce the abandoned fishing gear to make the oceans cleaner and safer. 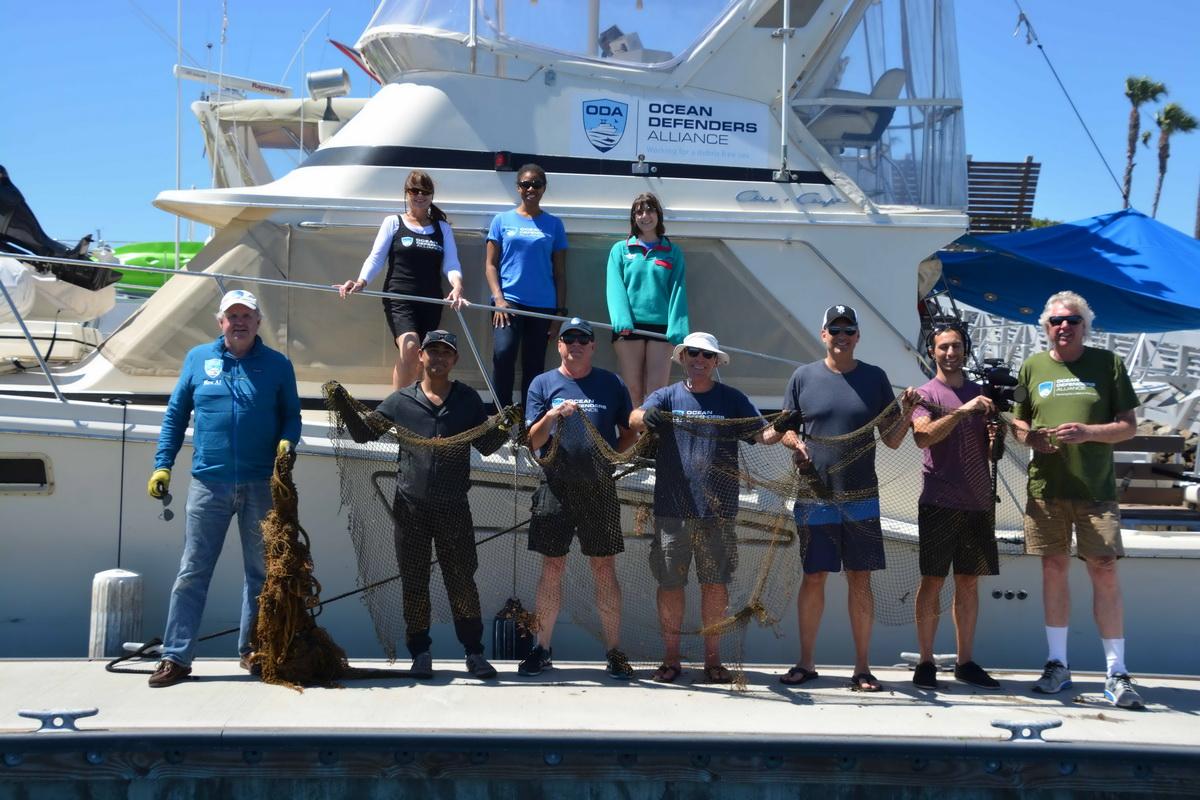 Crew with catch of the day

Well, the divers had a blast and we reached our goal of hauling out hazardous net, but there’s plenty more to remove!  We’ll be back next weekend to try to get more of that net out of harm’s way.

If you’re interested in joining our compassionate crew, please visit our volunteer page to learn more about the opportunities to get involved.