Earth Day Cleanups on the Big Island of Hawaii

With a very successful net removal on the very first day of my Hawai’i trip, on Oahu, I was really looking forward to seeing what more we could do on the Big Island (BI).

I arrived on the BI on April 20th. The very next day I headed north from Kona to a site called Puako Bay. It’s on the northwest side of the island. ODA’s friend Cynthia Ho, founder of Keep Puako Beautiful and a director of South Kohala Reef Alliance, had organized a beach cleanup for this bay and I was glad to be part of it. Not only was it Earth Day, it’s always fun to see all the kids getting out and doing their part to make this planet a little cleaner.

When I got to the site, there were about 30 people scattered all over the bay, rummaging around for our prey: plastics in any form! 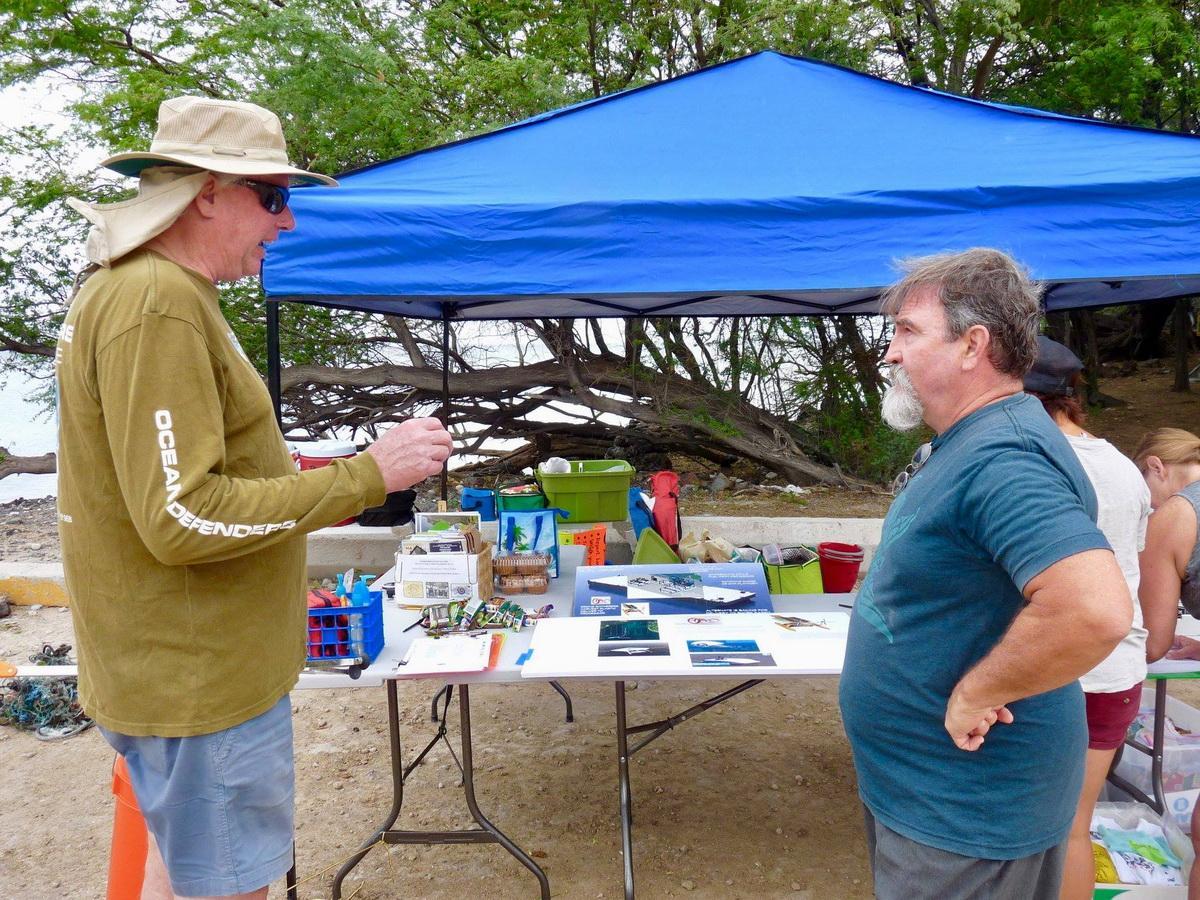 After talking with some folks about ODA and what we are doing in Hawai’i, I headed off to see what type of plastics I could find…

The area we were working on had a boat launch where fishermen haul their boats in and out of the water. As a consequence, there were a lot of beer bottles, cigarette butts, and fishing lures all around the parking lot. 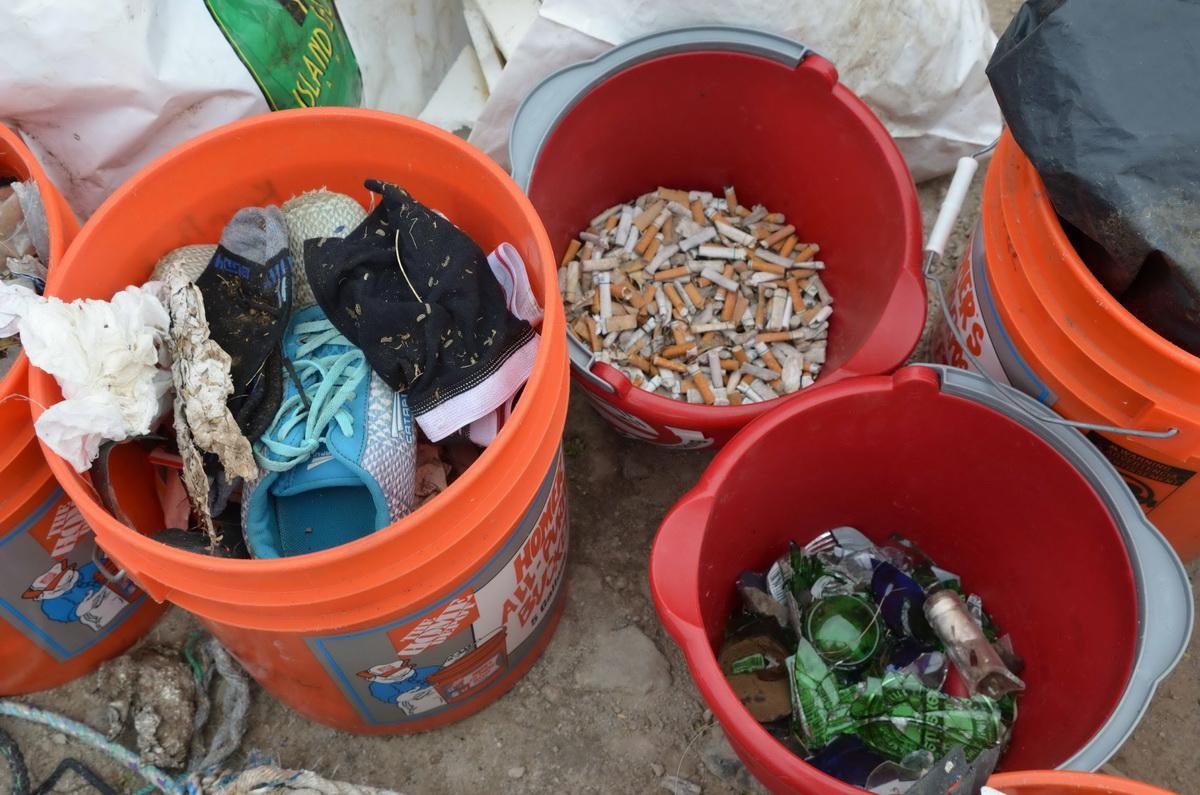 After we did what we could cleaning that area, we all moved off to different areas of the bay. I moved along the shoreline finding trap remnants and several ropes and lines used in the commercial fishing industry.

After three hours of concerted effort, we cataloged all the debris and put it all in a truck that was going to haul it all off to a collection site in Kona. When enough debris is collected at this site, the DLNR (Department of Land and Natural Resources) puts it into a container and sends it off to a company that converts it into steam power. 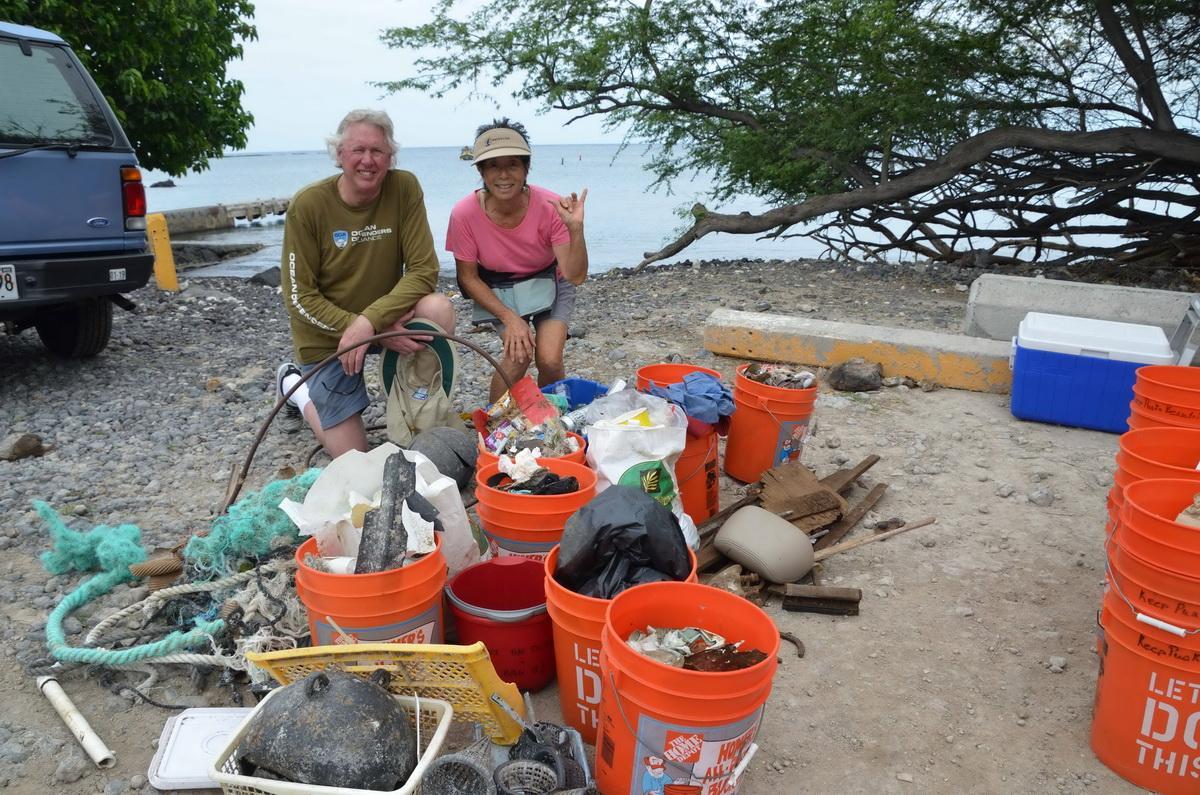 In all, we removed about 150 pounds of junk! Not a bad haul, especially considering most of this debris is plastic, and individually, hardly weighs anything.

After that, I headed a few miles north to a place called Kawaihae Bay. This is where our partners, Kohala Divers, have their shop and they keep their boat in a slip there as well. 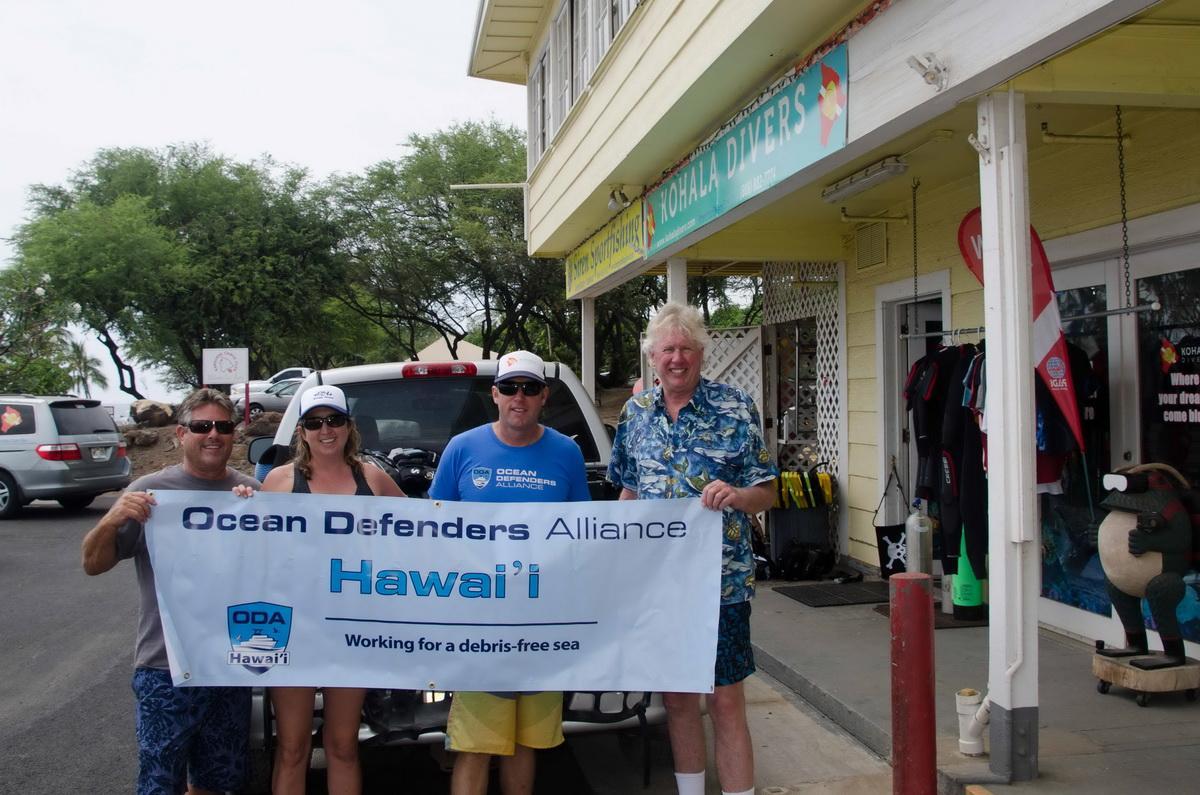 The shop is owned by Rebekah and Greg Kaufmann. They love what ODA is all about and have agreed to let us charter their boat to do UW cleanups. But this day we didn’t need a boat, the site was accessible from the beach.

I met Rebekah at a site that was inside the harbor, but had a lot of accumulated debris in it. When I arrived, the divers were just getting out of the water with the debris they found. And whoa, did they find some unusual stuff! Golf balls, 30 pairs of sunglasses, fishing lures, plastic pads, and beer bottles in all shapes and sizes. 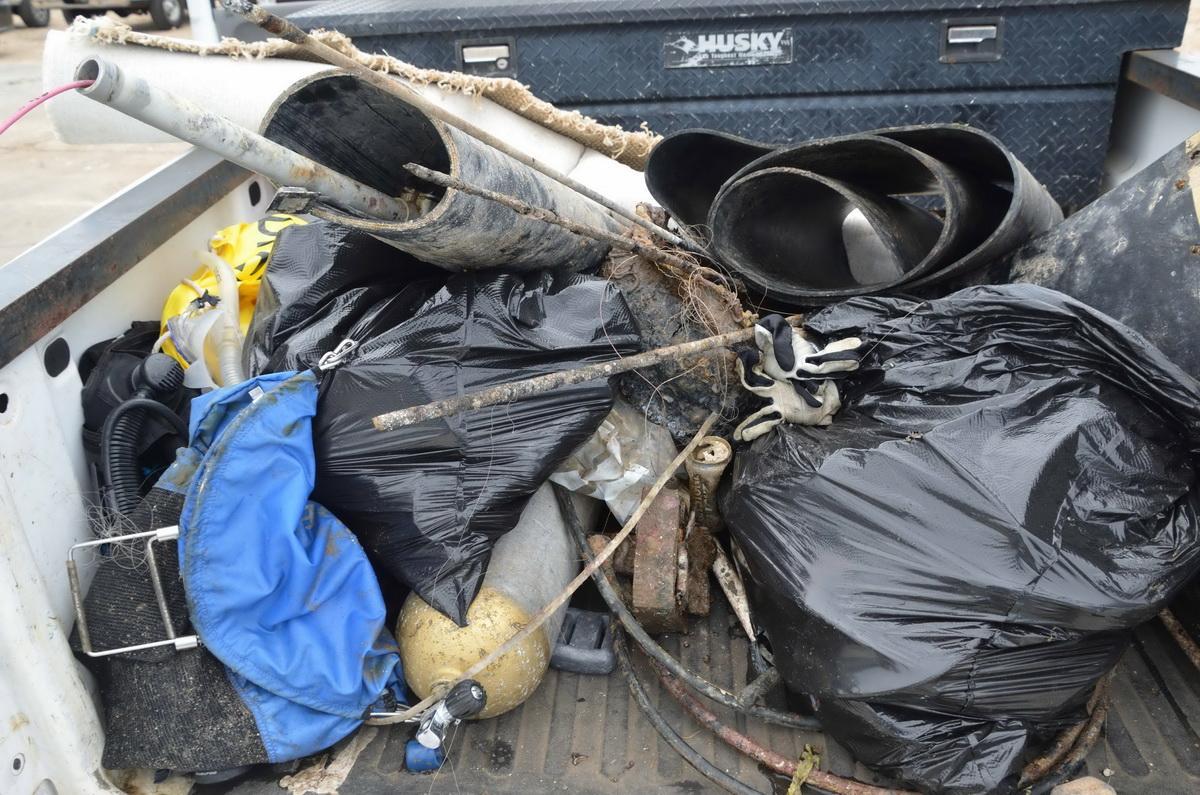 In all we had 14 divers participate and we had a nice potluck lunch while I talked with them about ODA. They’re excited at the prospect of being able to do underwater cleanups from a boat. Most people said they were going to sign up for one of these cleanups as soon as their schedules allowed. 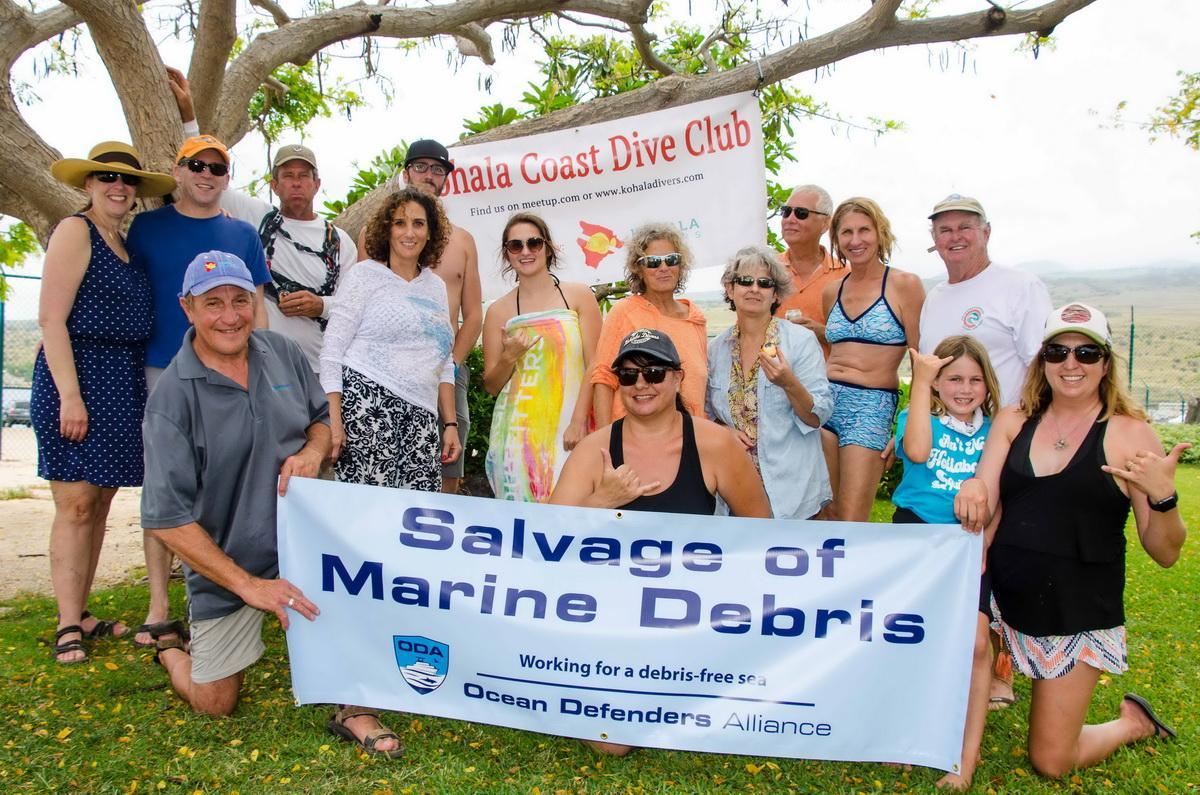 When all was said and done, we had removed about 250 pounds of debris, including two tires. There is still a lot of junk out there, including one boat sail was stretched out over a wide area. We’ll have to go back and get it because it was too big for them to cut up and haul out that day.

Sorry to report that the underwater visibility was so bad, less than 5 feet, we weren’t able to get any pictures… 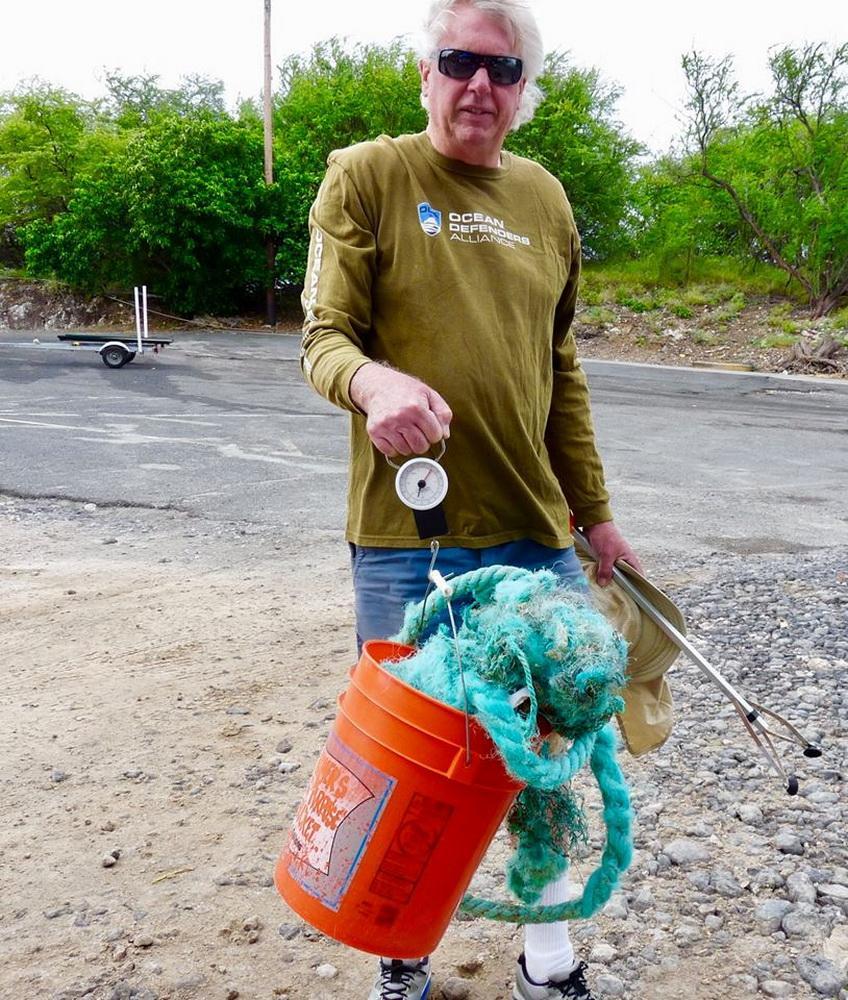 They had spearheaded an effort throughout the United States, called Earth Day Hope Spot Cleanups. The idea was to get a lot of people out removing marine debris in their local areas and then record all the debris totals into one report. As soon as it gets published we will put up a link to it on our website.

It will be inspiring to see how much we collectively pulled up. Even though ODA does these kinds of cleanups all year round, it’s really inspiring to see so many people get out on this very special day and treat the oceans as if our lives depended on it.

If the oceans are allowed prosper, so will humanity. But, if we don’t take good care of our Blue Planet, society will be relegated to living in a diminished world.