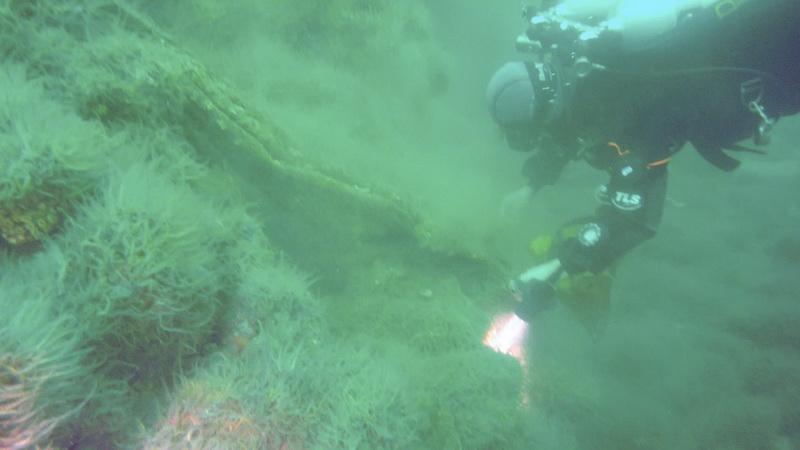 With our 55-foot boat Mr. Barker’s LegaSea back in running order, we headed back out to Anacapa Island on Sunday, August 14th. Anacapa Island is a small volcanic island located about 11 miles off the coast of Ventura County, California.

We motored out of the Channel Islands Harbor and headed south towards the island. The skies were partly cloudy and we couldn’t actually see the island due to a marine fog. Thankfully, we have a great GPS system with radar capability.

The seas were one to three feet, so it was not exactly a smooth ride over, but we made it in a little over an hour. We decided to head back to the place we had removed four traps from on our last outing, to a site called Frenchy’s Cove. 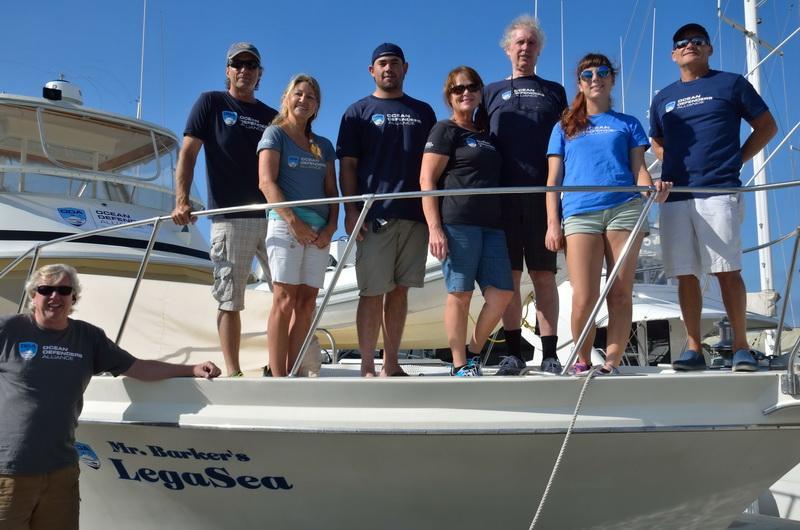 Divers this day were: Kim Cardenas, Steve Millington, and Trevor Fulks (underwater videographer). Trevor and his wife had a baby about a year ago, so we hadn’t seen him in quite a while.  Welcome back, Trevor! 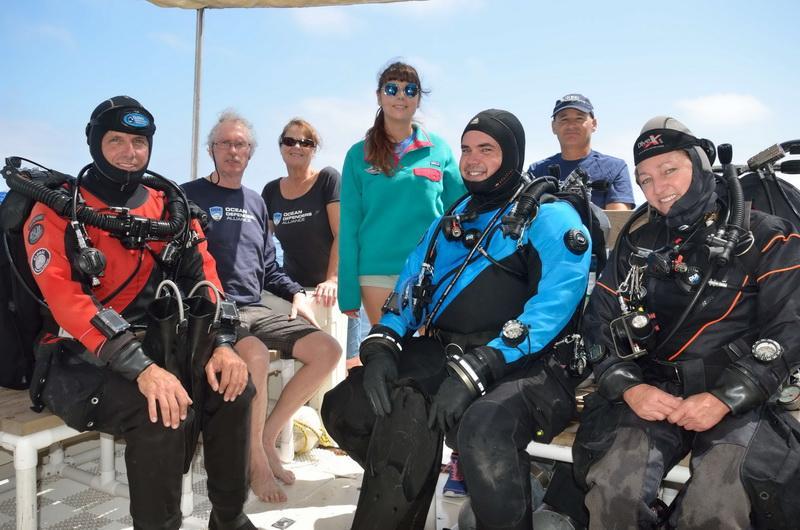 Around 10:30am, Kim, Trevor and Steve jumped into the water and headed down to a site they know well. In 2014, the folks at Channel Islands National Marine Sanctuary (CINMS) asked us to remove a net that they had found. It was in roughly 60 feet of water, stuck on a rocky reef. Our same three divers today (Kim, Steve, and Trevor) participated in that removal project. 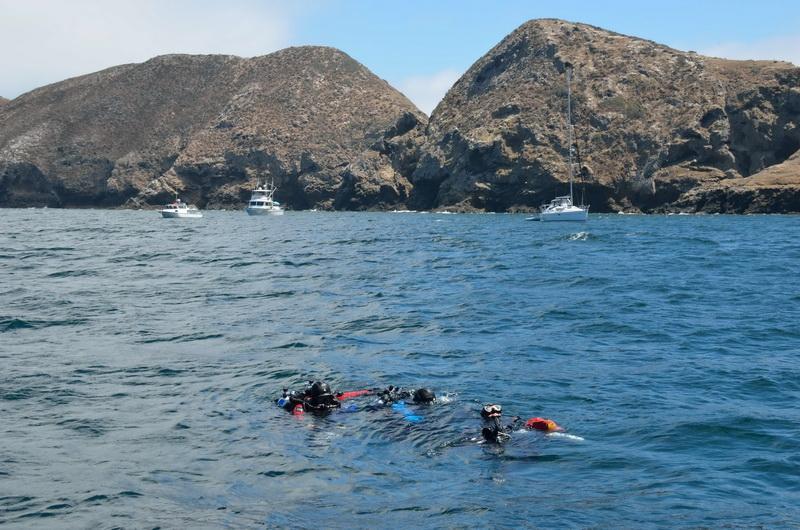 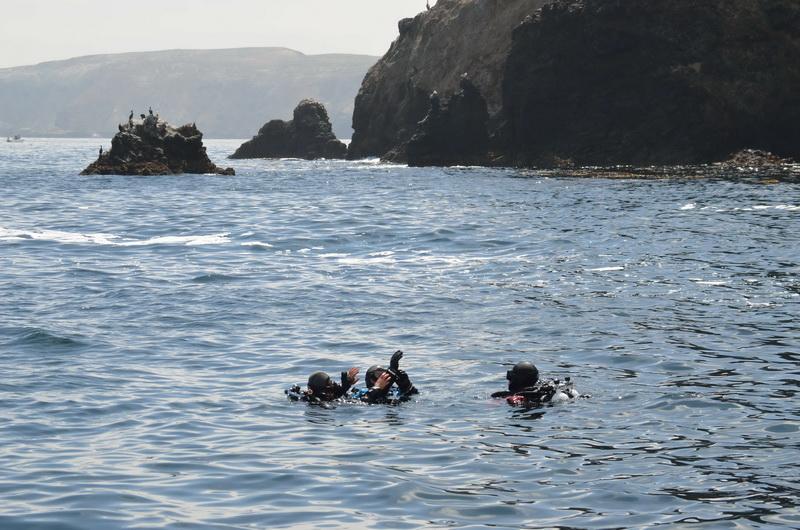 About 15 minutes into their first dive we saw the first lift bag break the surface, about 100 yards from our boat.  Very quickly we saw another bag floating at the surface. The divers attach these lift bags to the debris, to pull it to the surface and alert the Boat Crew that there is debris to haul out. 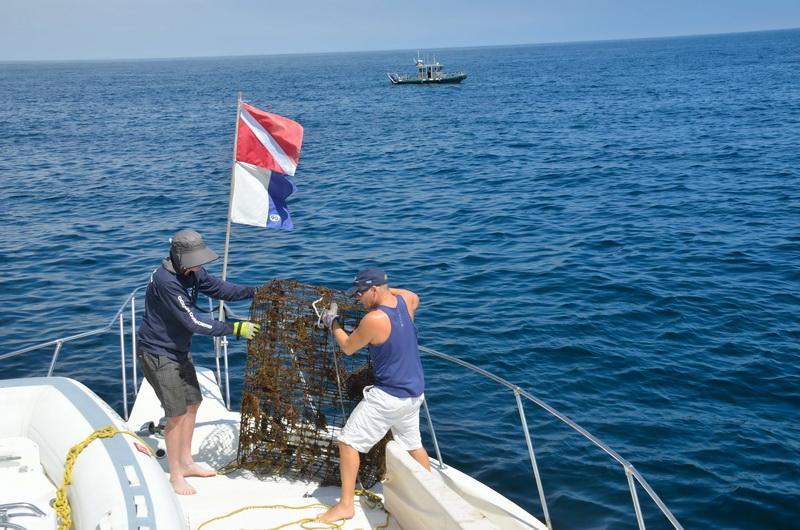 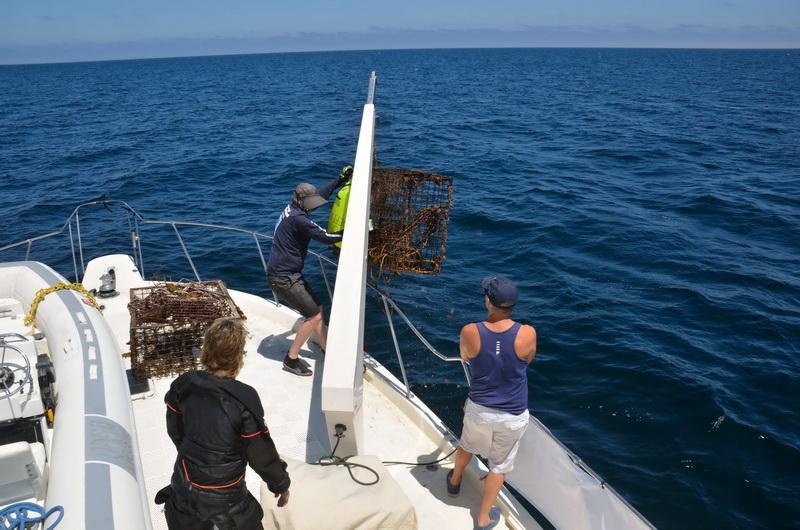 As soon as they were back on board, after an hour dive, we pulled up anchor and headed towards the bags. We decided not to use the Rigid Inflatable Boat (RIB) this day because the wind was creating waves that would make launching it too precarious. We prefer to use the RIB and it makes our debris-removal operations much easier, but felt it was safer to not put it in the water.

At this point the wind was really starting to pick up, and maneuvering the LegaSea became a little tricky. But we soon had two traps on the front deck as well as some trap lines that were littering the ocean floor.

During the surface interval (rest periods) between dives, we decided to move the boat just a few hundred feet away, where the divers could continue their route east.

We had some time now to hear what the divers were seeing on their journey. While on their route they ran across two nets that were stuck on some rocky reefs. It was too big of a job to tackle right there, so, we made note of the location and will head back there soon to try to remove both nets. [At the top of this article, see the photograph of Kim Cardenas near the net].

Our divers have also been on the lookout for an invasive species of kelp, called Undaria. We’ve been asked by a marine biologist at the National Park Service to alert them when we see this. We have now done that, and sent the information along with some pictures that Trevor took. We also got the GPS locations. Good eyes Kim, Steve, and Trevor!!

We Work for Pelicans' Survival, too!

While we were enjoying the break in the action, we had a chance to take in the sights and sounds around us.  Because we were anchored so close to the island we could see hundreds of pelicans flying all around us. When they landed right near the boat, I could see that they were all juveniles. They were chasing small bait fish and trying out their newfound skills at launching themselves beak first into the water to scoop up some edibles. 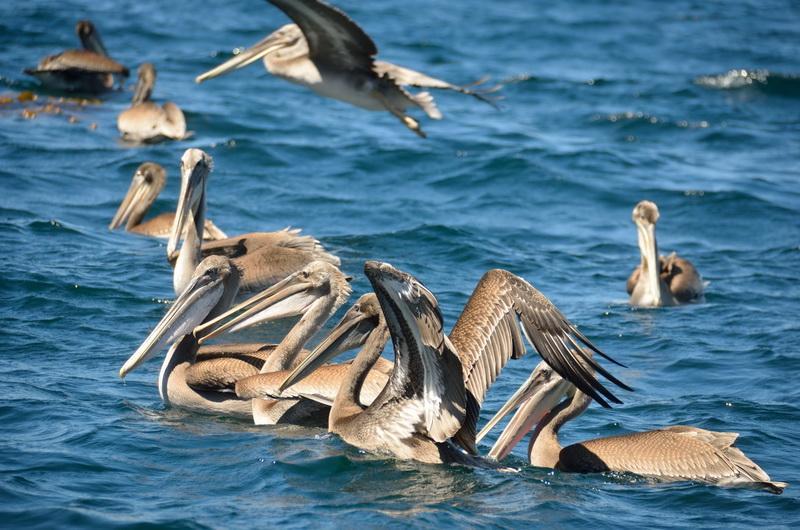 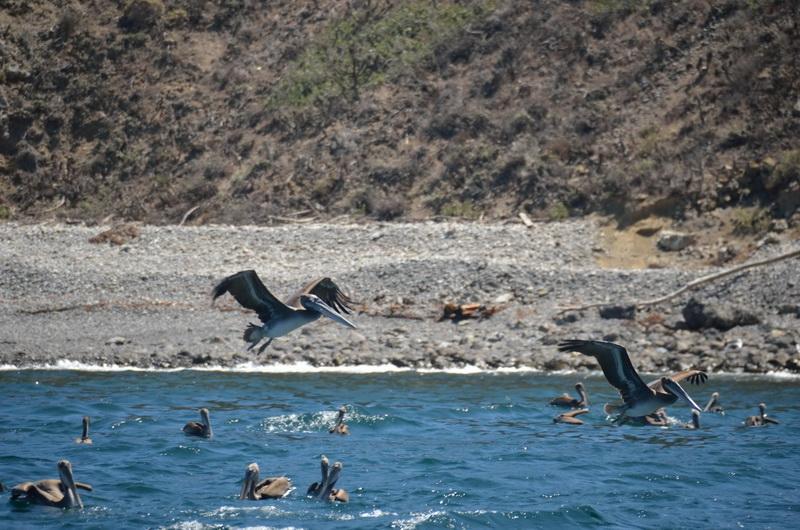 Keep in mind, this island has the largest breeding colony of brown pelicans in California. The work we do underwater manifests itself into more fish for all these animals to eat. It is nice to see the fruits of our labor up close and personal!

Killer Lobster Traps Have to Go!

After we finished our lunch, the divers got back to work. And work they did. We were delighted to see five lift bags floating lazily at the surface, and after their one-hour dive Kim, Steve, and Trevor were patiently waiting in the water for us to pick them up.

As we motored up to them, they were holding steady right next to two lift bags that had a trap hanging from them.  We got the divers aboard first, and then everybody switched into “retrieval mode.” The bags were scattered over a large area, and all were heading quickly towards the rocky shoreline.

Yikes! We had to move fast to keep them from stranding on the rocks. By now the winds were howling and chasing these things down felt like herding cats with a stick, with the boat just 40 feet away from crashing into the rocks at any moment.

After 40 minutes of hectic work, we had the trap on the deck as well as 300 feet of trap lines, and about another 200 pounds of trap remnants.

While we motored back to the harbor, the seas were not kind to us, but the boat held up, and we got back into our slip at 6 o’clock in the evening. 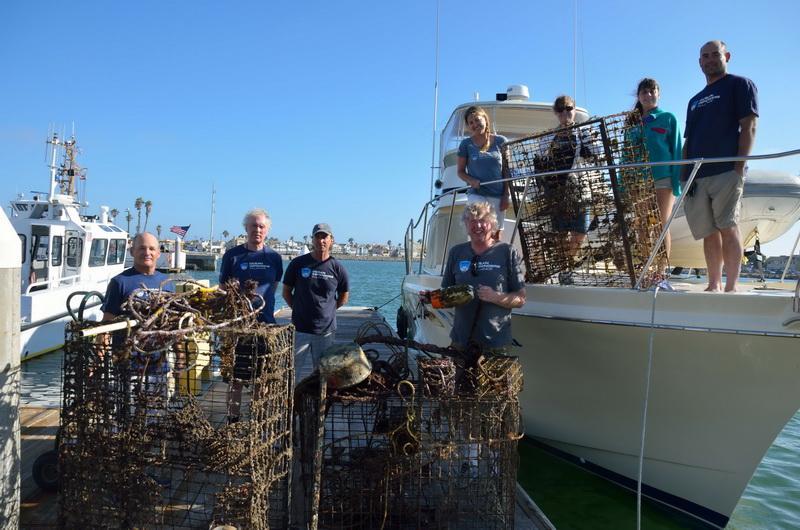 All in all, we had a very productive day thanks to all the GREAT volunteers, and of course the yeoman work done by Mr. Barker’s LegaSea!

Stay tuned, we’ll be heading back shortly and we’ll have more to tell you about!

Help fuel up the boat with a donation today :)