By Kim Cardenas, ODA Advisory Board member and SCUBA diver

On board were Rex Levi as captain, Sue St. Sure and Jeff Connor manning the RIB (rigid inflatable boat), and Daryth Morrisey as photographer and topside crew.

Dive team for the day consisted of Geoff Walsh, Al Laubenstein, Kim Cardenas, and Todd Kortte, who was the underwater videographer.  The team settled in for an hour plus boat ride down south to our destination, Corona del Mar in Newport Beach. 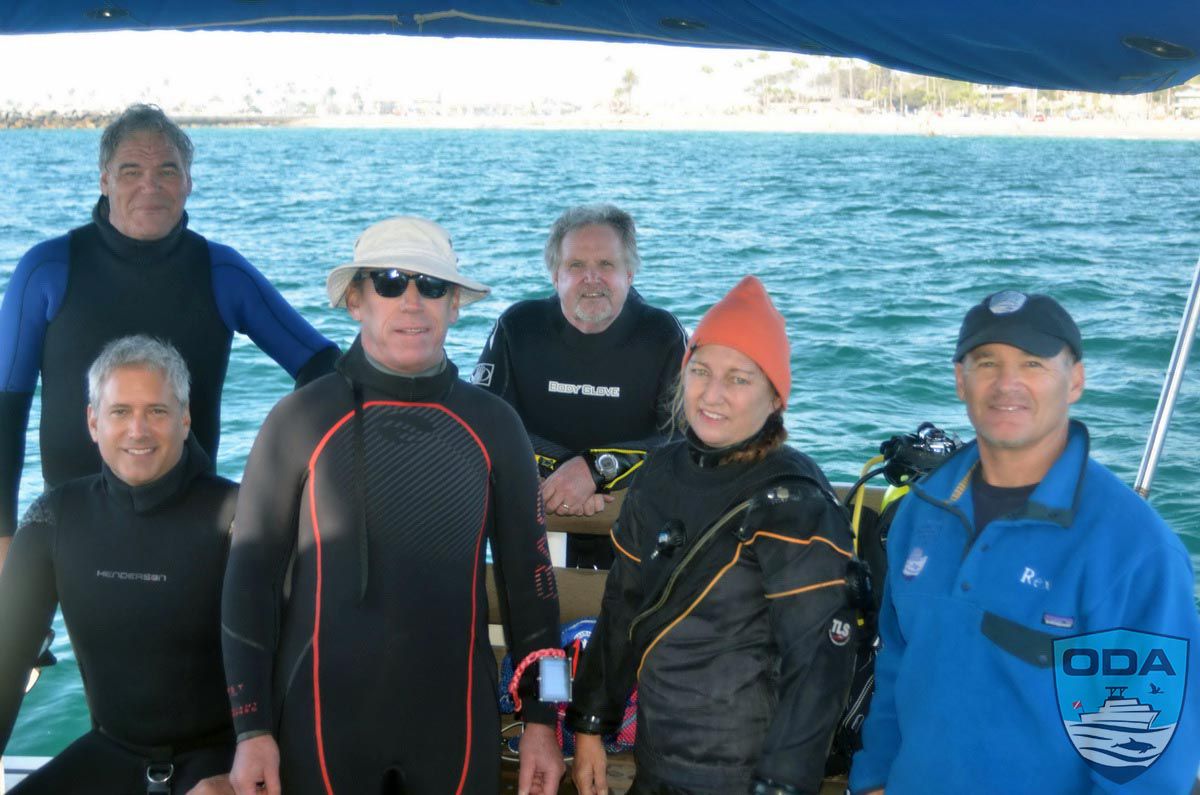 Kurt Lieber, ODA’s founder, was recently approached by Mike Couffer, of Grey Owl Biological Consulting, to help with a special mission.  ODA’s expertise in removing man-made debris and ghost fishing gear was being requested to aide in restoring a very special habitat.

Corona del Mar is one of just a few nursery sites for the early life stages of the Giant Black Sea Bass (GBSB).  This is the largest bony fish inhabiting California’s nearshore waters and can grow to nine feet and more than 800 pounds.  However, when they’re first born, they are less than an inch long and need open, sandy-bottomed habitat like Corona del Mar, where they can feed on shrimp. 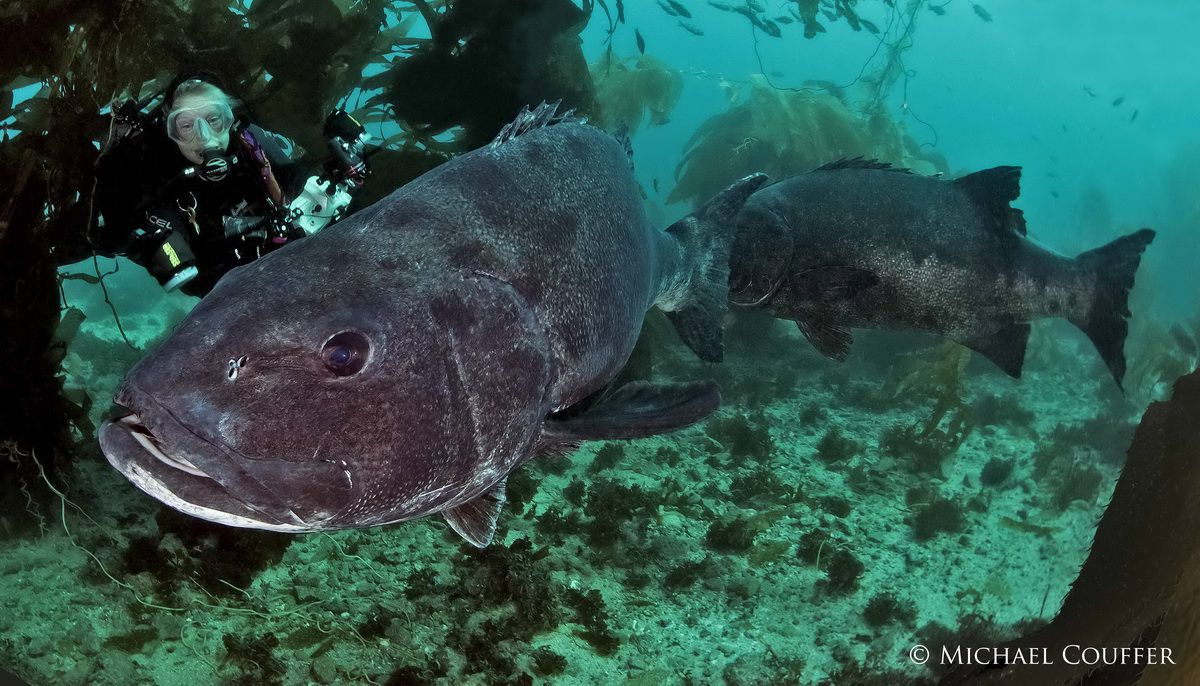 The presence of large man-made debris and ghost gear in the area provides sites for kelp to anchor and grow, creating hiding spots for predators of the baby bass.  This dooms the babies before they can grow to 5-6 inches and head out to deeper waters.

The Giant Black Sea Bass population was decimated in the early part of the century due to over fishing and were listed as a critically endangered species.  Restrictions were placed on capture or harm by California State law and their numbers have started to return.  This means it’s critical that as many babies as possible survive to grow into adulthood. 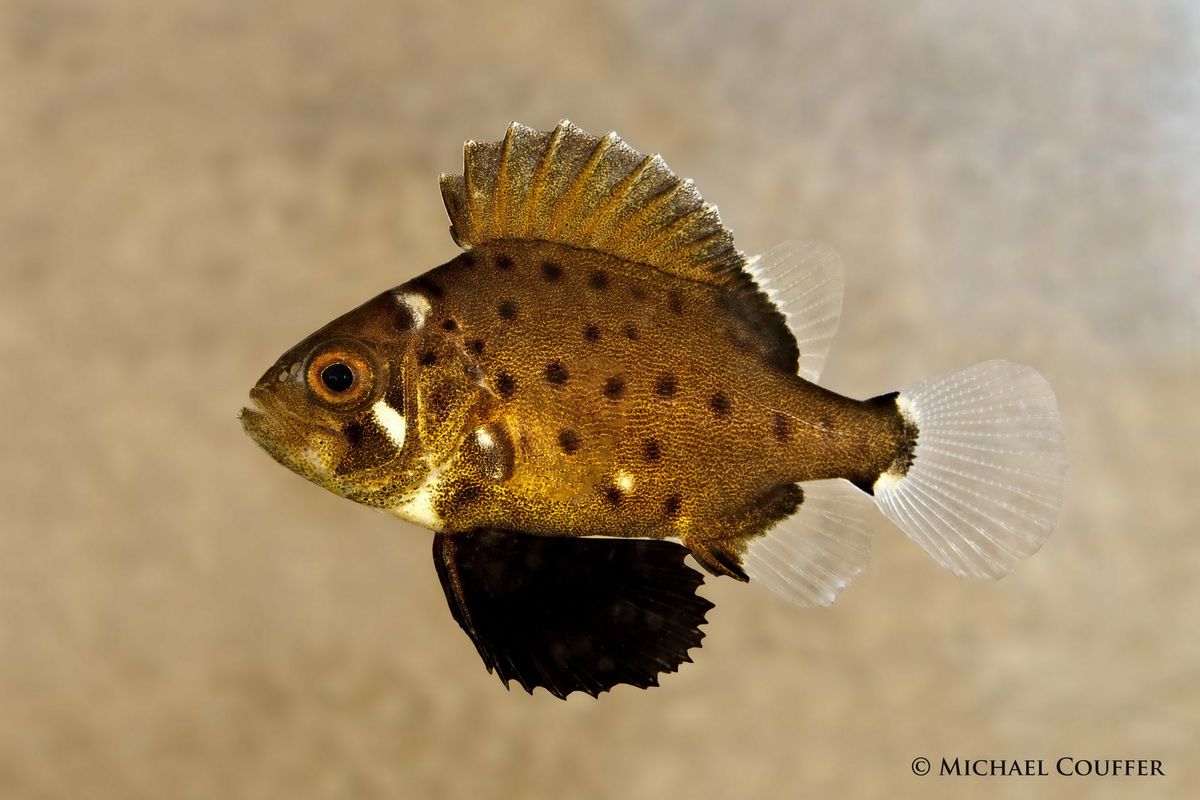 Before the team could start their removal activities, however, they had to pick up a couple of additional people in Newport Beach.  Michael Fernandez, a photojournalist for the Orange County Register was picked up near the Harbor Patrol dock in Newport Harbor.  He planned to take photos to accompany an article scheduled for publication in The Register the following day.  In addition, Mike Couffer, the biologist who is dedicated to helping baby GBSB have a habitat where they can thrive, also joined the crew on the boat.

Jeff and Sue got the RIB (rigid inflatable boat) launched and the dive team was ready to go!

Al, Geoff, Kim, and Todd all dived as one team.  With Diver Propulsion Vehicles (DPVs), they scootered around the underwater area looking for debris they could target for removal.  Because of the relatively shallow depth of the area—average 30 feet—the divers were able to have long bottom times of up to 90 minutes! This allowed the team to cover a lot of ground.

The dive team quickly started spotting debris and did their thing, tying lift bags to the debris and floating it to the surface. 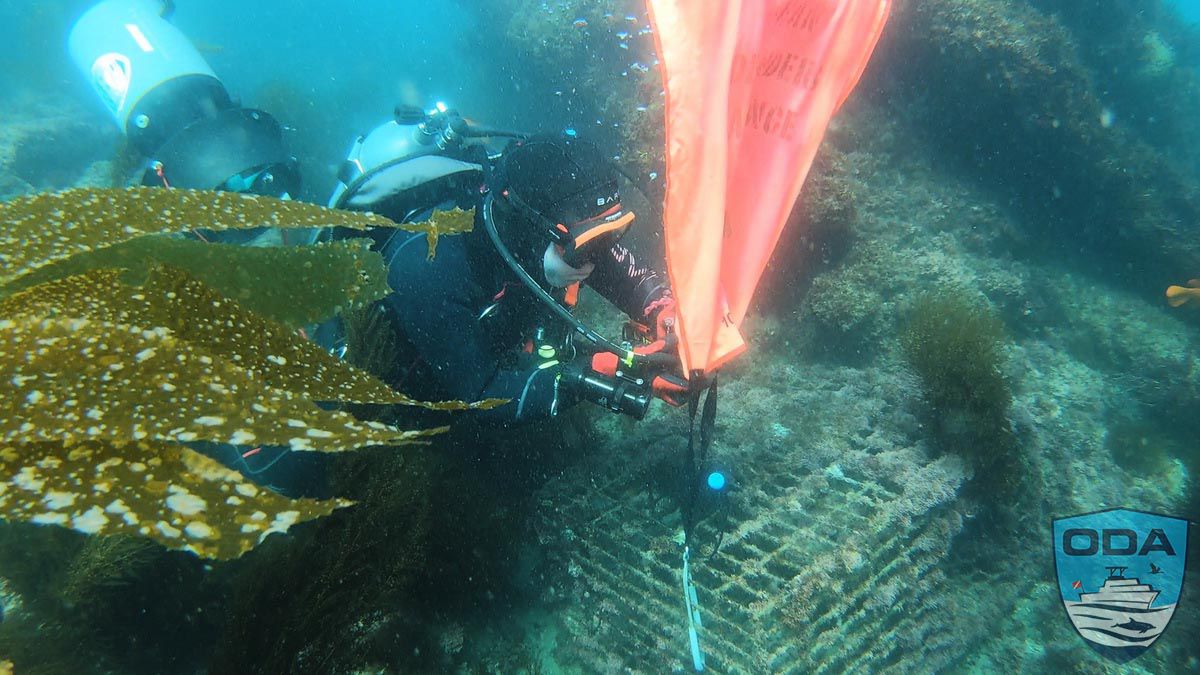 Jeff and Sue then did their thing, towing the lift bags and debris back to the boat using the RIB, setting up Rex and Daryth to hoist it onto the deck using the davit. 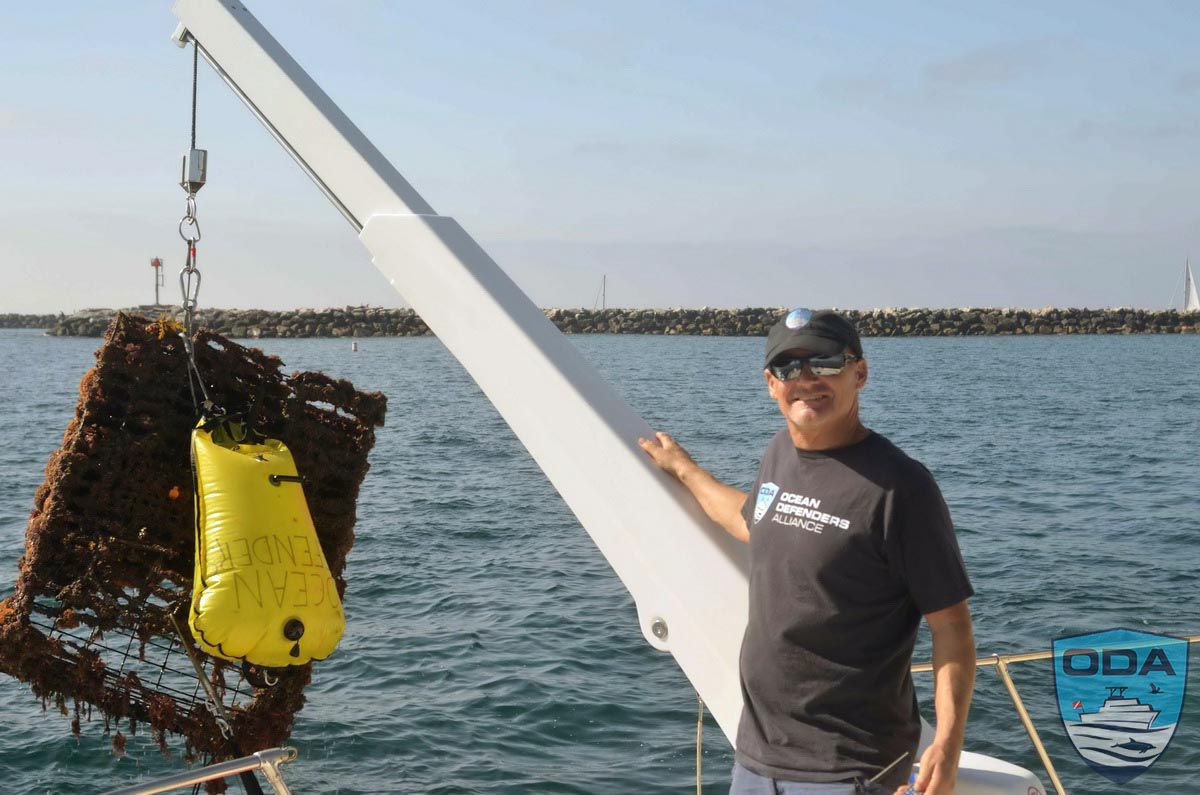 The ODA Debris-Removal Crew is a well-oiled machine!

Scientist Mike Couffer also joined in on the dive and he single handedly brought up a large piece of boat railing on his own.  Todd got excellent video and photojournalist Michael was busy photographing the operation both on the surface as well as capturing some shallow underwater shots by free diving. 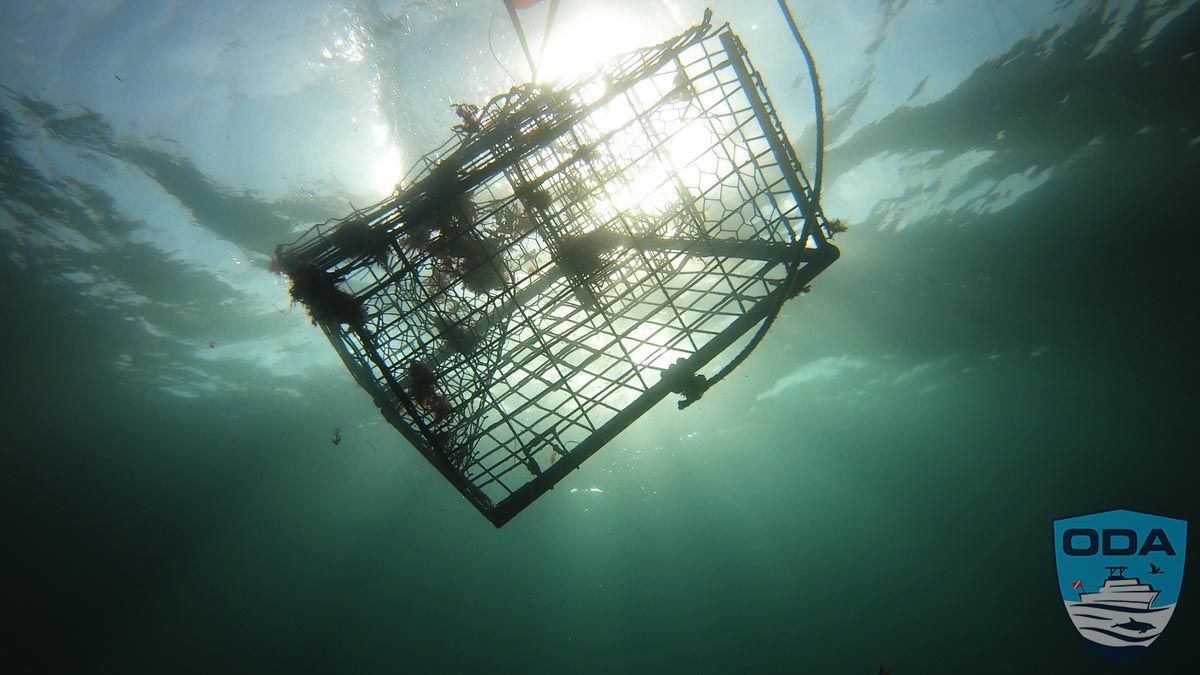 After one dive, the team took a break and the divers completed their surface interval.  After some snacks and rehydration, everyone was ready for Round Two.  It proved to be equally productive and more and more lift bags were hitting the surface, keeping the topside crew hustling.

After the second dive, the day’s booty was inventoried.  All in all, the team removed three commercial lobster traps, two hoop net traps, a large piece of boat railing, two anchors, and several feet of line and chain. 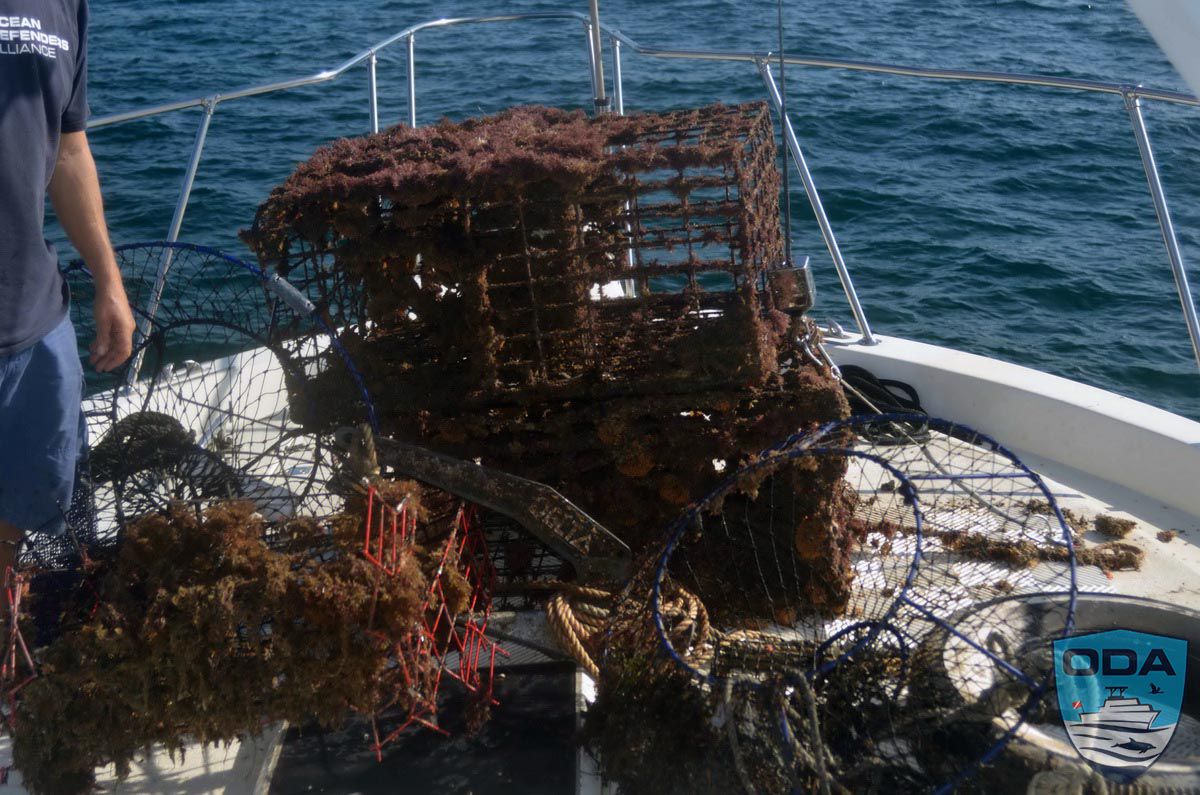 The entire crew and guests worked very hard and the mission was deemed a success.  After biologist Mike and photojournalist Michael were returned back to Newport Beach, the team headed north to San Pedro, getting back to the marina and finishing up in the dark.

We all agreed we made a positive impact in the area and that the site should be visited again to find more debris that’s revealed as the sands shift due to storm and surge action.

On the eve of the US Thanksgiving Holiday, I’d like to extend my gratitude to the people who make this ocean conservation work possible. Thank you to the divers and crew for your time, energy, and expertise!  Much appreciation goes to our generous donors for financing the boat operations and allowing us to help in this important mission of protecting the Giant Black Sea Bass. With all of your help—from land and sea—the day’s mission was a resounding success.