As ODA continues to expand our efforts to remove marine debris from the coastal waters of Hawai’i, we took our first trip out with Jack’s Diving Locker (“Jack’s”) on December 14th.

As you probably already know, ODA has made arrangements in Hawai’i to charter a few dive boats to do a once month cleanups. Jack’s is one of the dive outfits we’ve partnered with on the Big Island. Teri Leicher owns and manages Jack’s with her husband Jeff. Teri and her staff have reached out to the people who dive with them frequently and invited them to volunteer with ODA to remove debris from the waters around Kona, on the Big Island. 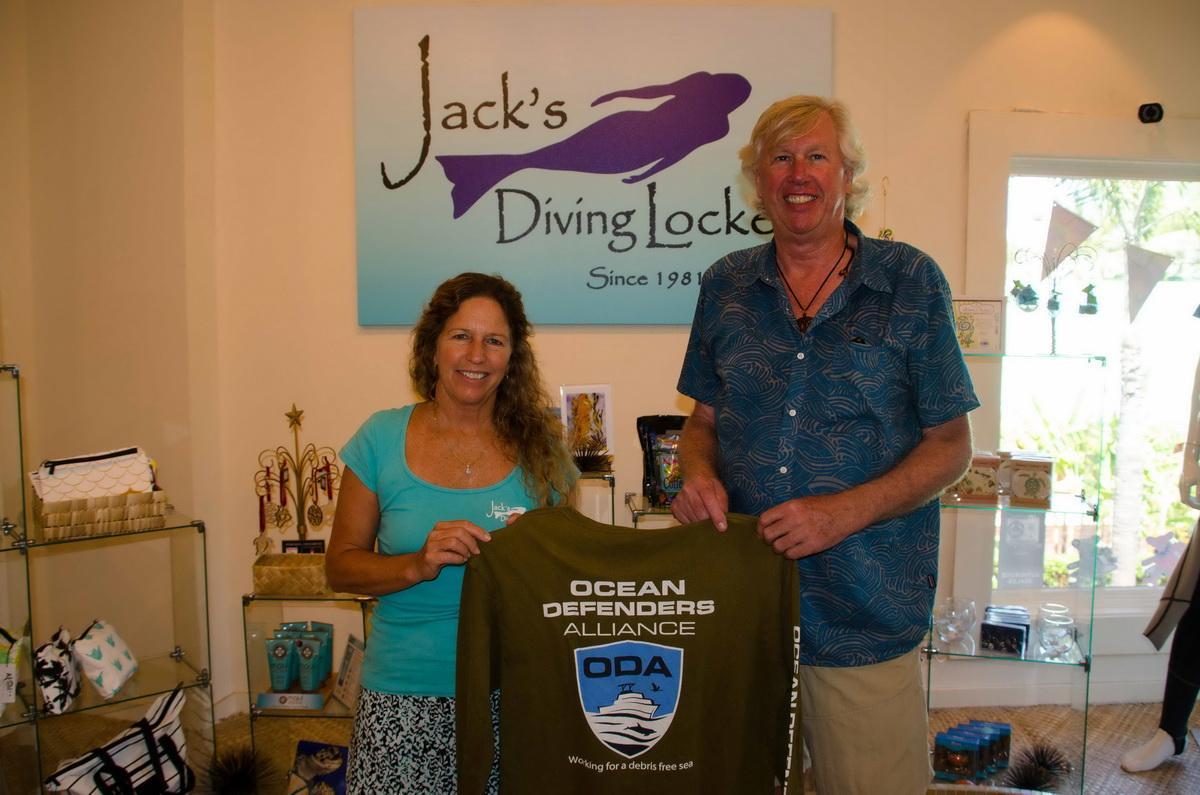 Our next dive with Jack’s is on January 30th. Please visit their website to find out more and how to join the crew. https://www.jacksdivinglocker.com/off-shore-marine-debris-charter-jan-30th/

On our first outing, we had a nice turnout of people (eight volunteers!), especially considering this was our first effort on the Big Island. 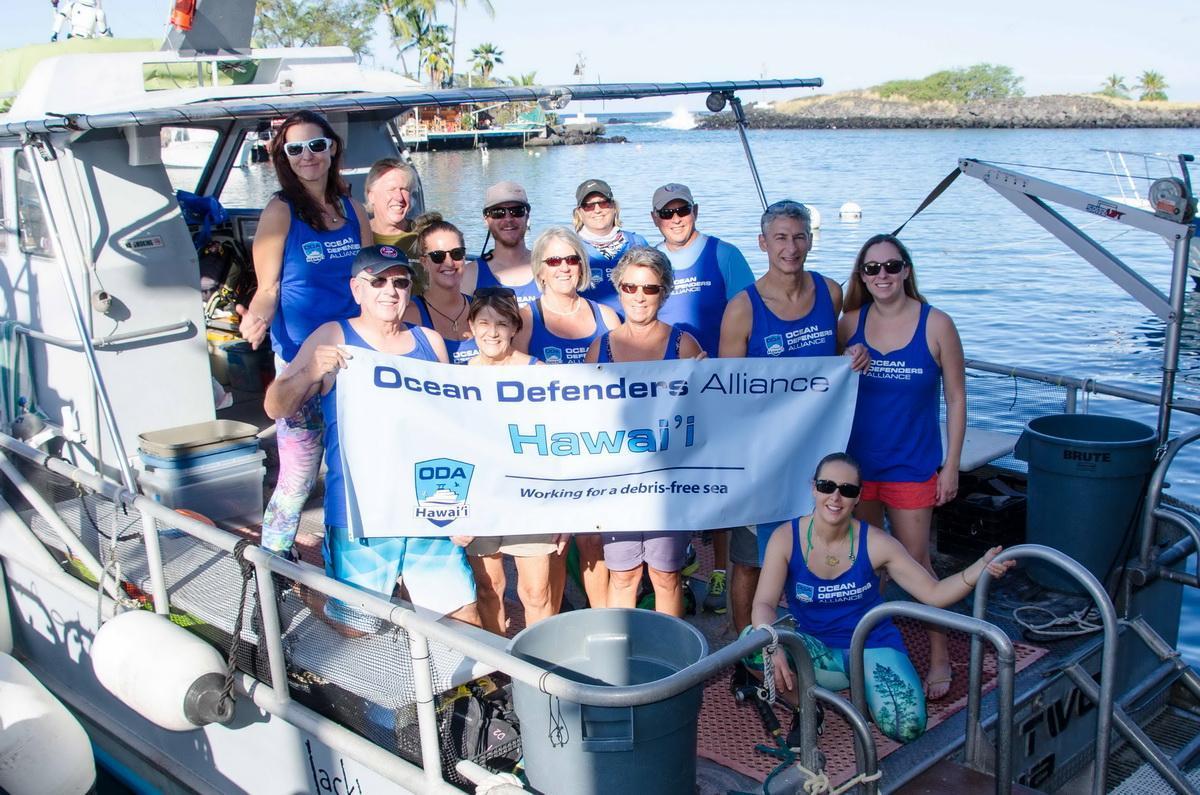 We boarded their boat, the Diver Two, in the Honokohau Harbor on a windy day. Our intent was to search the offshore waters looking for any man-made debris we could see on the surface. Once we found those areas, we were going to jump in the water with snorkeling gear and remove as much of it as we could.

We headed for areas that the boat crew had scoped out a few days prior, with the hopes that we’d find debris to remove.

As we were searching the captain received a radio call from another boat, saying that they were seeing a large pod of long-finned pilot whales.

We quickly headed to the spot and sure enough there were at least 3 pods of the whales, each pod consisting of 5-12 whales each. Some of them actually swam right up to the boat, then disappeared as they swam right under our boat. What a cool sighting!

Then the captain relayed that another call came in saying that there were sperm whales around as well. We moved about a quarter of a mile away, and we could clearly see the distinctive blows of the sperms as they took their breath after a long and deep dive. 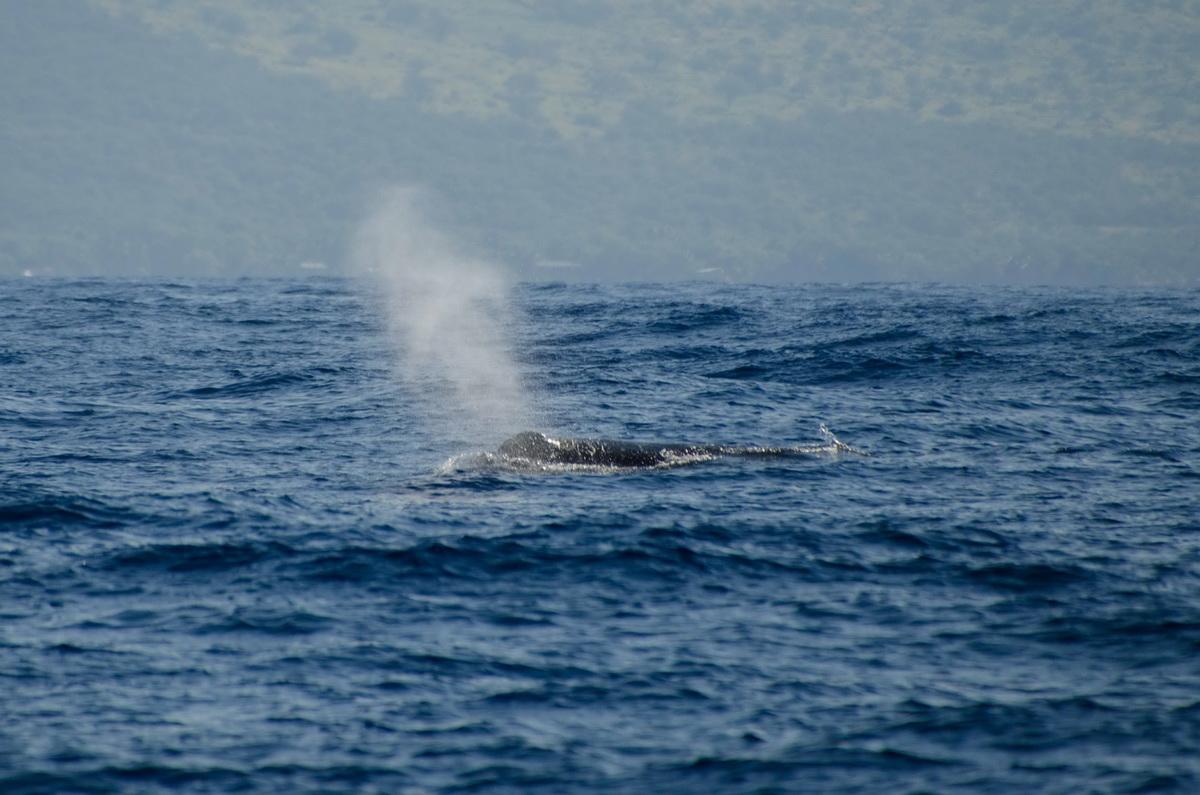 These animals have been recorded diving to 10,000 feet deep, hunting for their favorite food: squid.

Sperms have traits that make them very unique in the animal kingdom: They hunt in groups of 4-8 individuals. As they hunt, one whale will swim the deepest, locate some squid and drive them up into shallower waters where the rest of the whales are waiting to ambush their prey.  After being submerged for up to an hour, the entire group comes up for air and rest for a short while. On the next dive, in order to avoid getting decompression sickness, a different individual will take its turn at being the deep diver and drive more squid upwards towards the rest of the pod. By rotating their roles in the hunt, the group maximizes their effectiveness by not diving that deep so often and therefor avoiding the bends. Brilliant strategy!

Richard Ellis wrote what I consider the definitive book about these incredible whales, called: The Great Sperm Whale. If you are the least bit interested in finding out more about these animals, check it out. You will be amazed at how intelligent and compassionate these whales are.

When we first spotted them, we were several hundred yards away, but then some of them started moving towards our boat. One of the crew from Jack’s quickly got her snorkeling gear on and quietly slipped in to the water to try to get a look at them. In quick succession, some of the volunteers were in the water hoping to catch a glimpse as well. A few of them actually did see them, and everyone heard them. What a thrill! 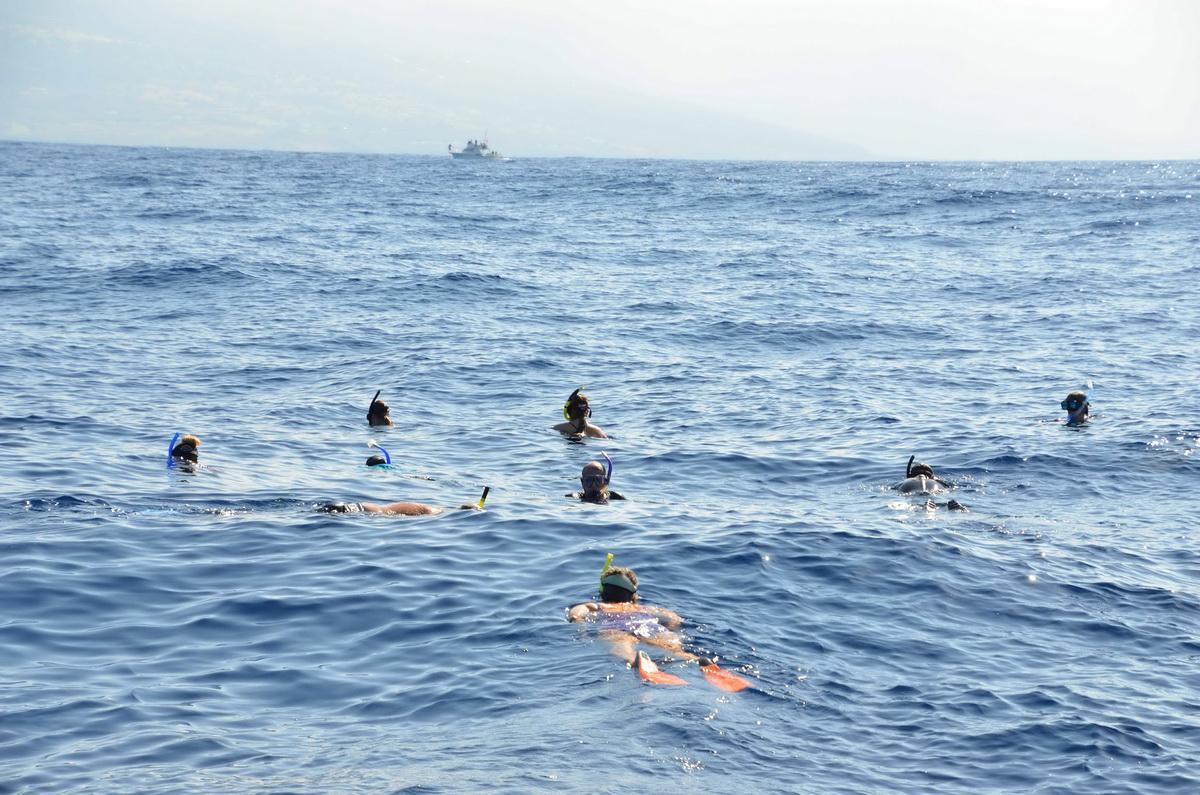 Sperm whales are being affected by marine debris in devastating ways. When human’s plastic bags get into the oceans, they slowly start sinking in the water column. To a whale, those bags like a lot like squid, and they suck them in thinking they are food. Every year some of these whales wash up on shore and have been found with hundreds of pounds of plastic bags in their stomachs. I recently read a report about this, and scientists estimate that for every sperm whale that washes ashore, another nine sink to the bottom and are never counted. They can’t digest the bags and consequently are doomed to a slow, agonizing death, due to starvation…This is very sad, and it is precisely the reason ODA puts so much effort into removing plastic debris.

So, back to the cleanup…

After the whales disappeared into the deep, everyone climbed back aboard the boat and we continued our search for debris. We found some bottles floating at the surface, and as we began fishing them out with our net, we could see some fish stuck inside! 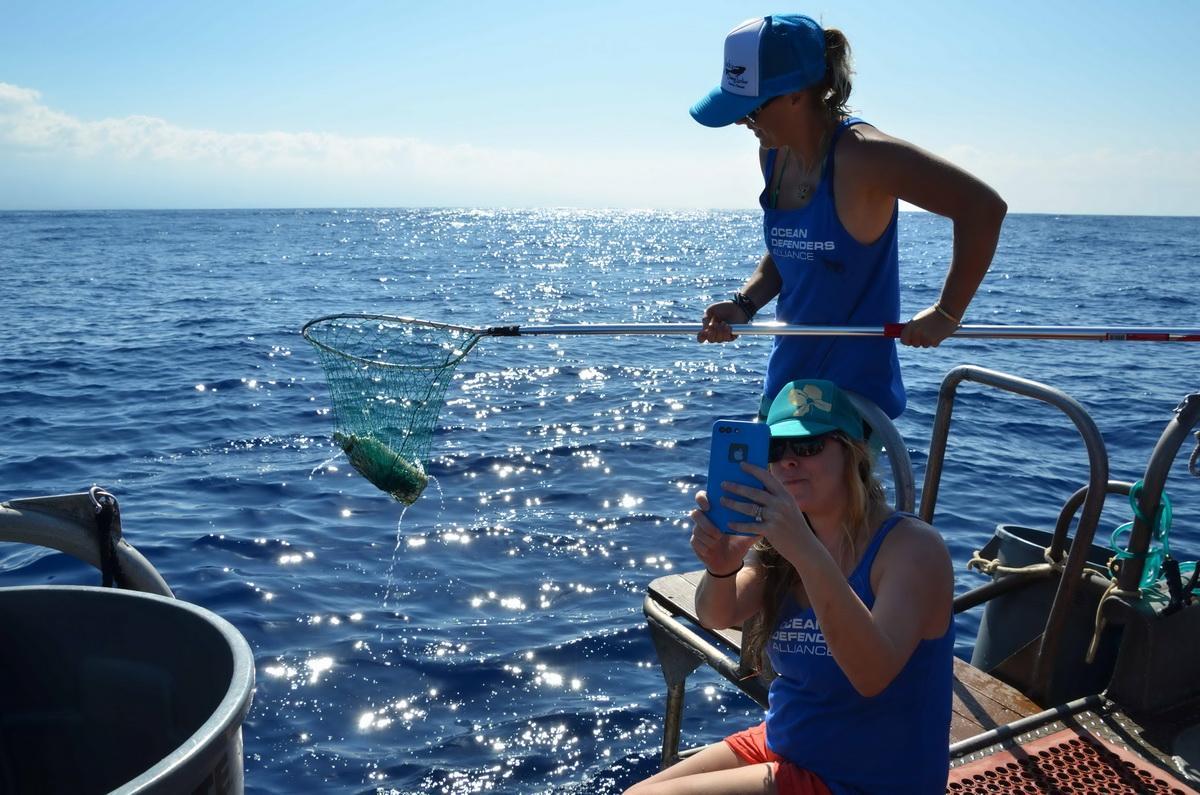 Some fish use the bottles as homes. They go inside to avoid predators and come out to feed when the coast is clear. Unfortunately, sometimes they get so big that they can no longer get out of the bottle and are destined to die in there.  Unless someone comes along and gets them out. And that is exactly what we did. We cut the bottles open, placed the fish (three beautiful frogfish) and crabs in a bucket until we could find a suitable place to put them back in the water. 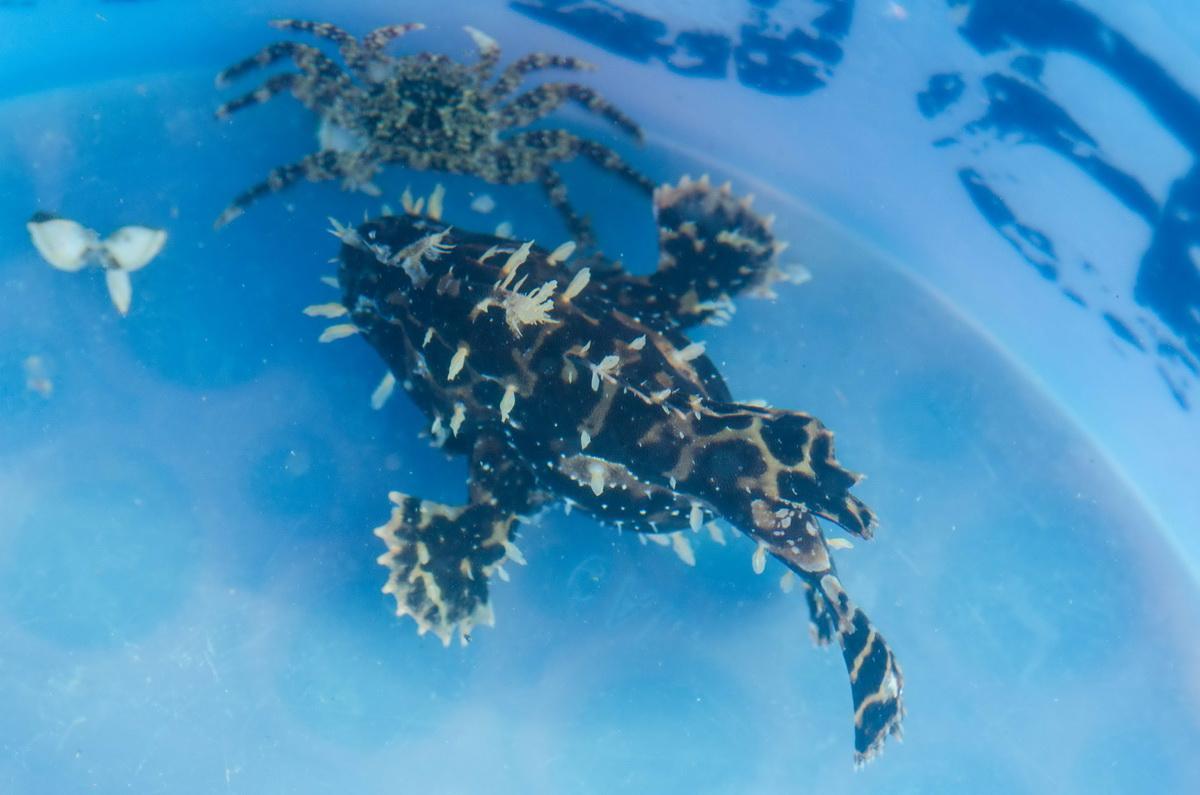 In the open ocean it is hard to find places to hide from predators, so anything that floats becomes a nice spot to seek shelter in. Usually that means floating kelp, sargassum, logs, or more recently: man-made stuff like plastics.

Luckily, we spotted a log floating nearby, and headed over to it to get the fish back in their environment. The frogfish use the log to hide from predators; they attach themselves to it. As we approached we could see the log had become a resting spot for a red-footed boobie. 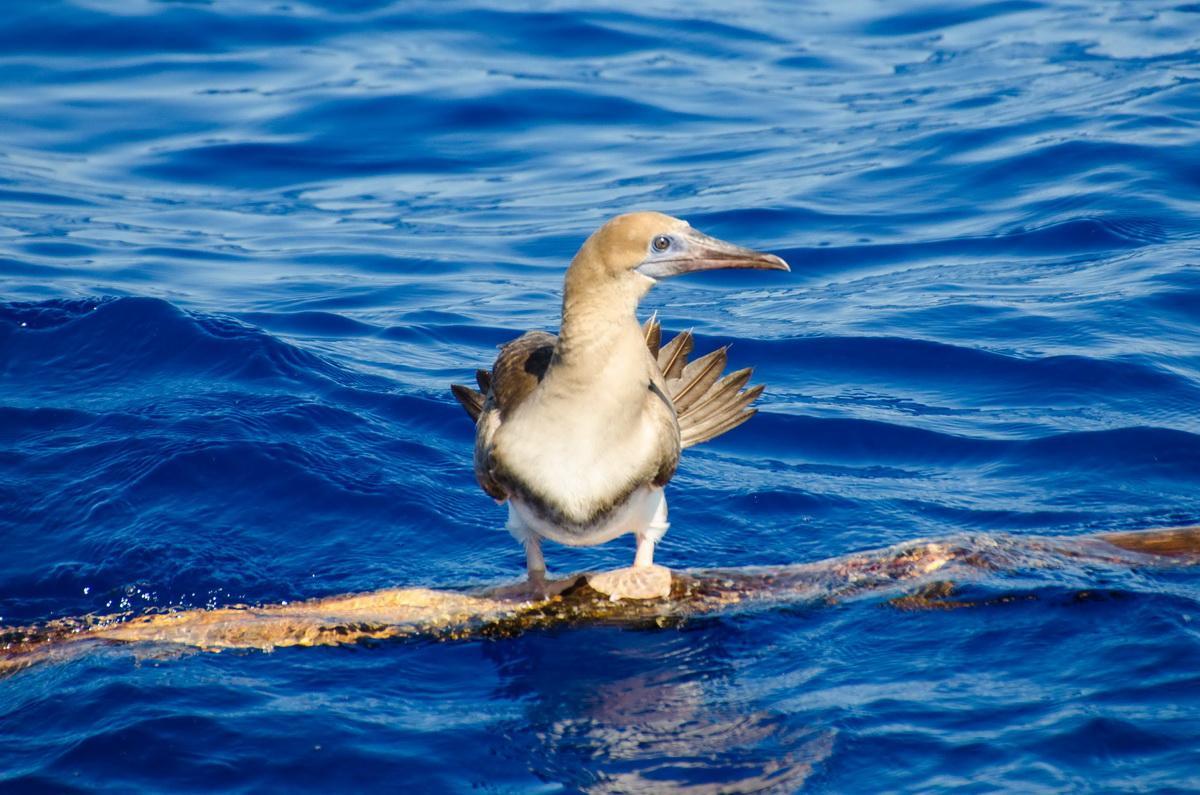 A few of our team got in the water with our rescued fish, and as they approached the log, the bird flew away. Sorry buddy, but we’ve got some precious cargo that we need that log for! 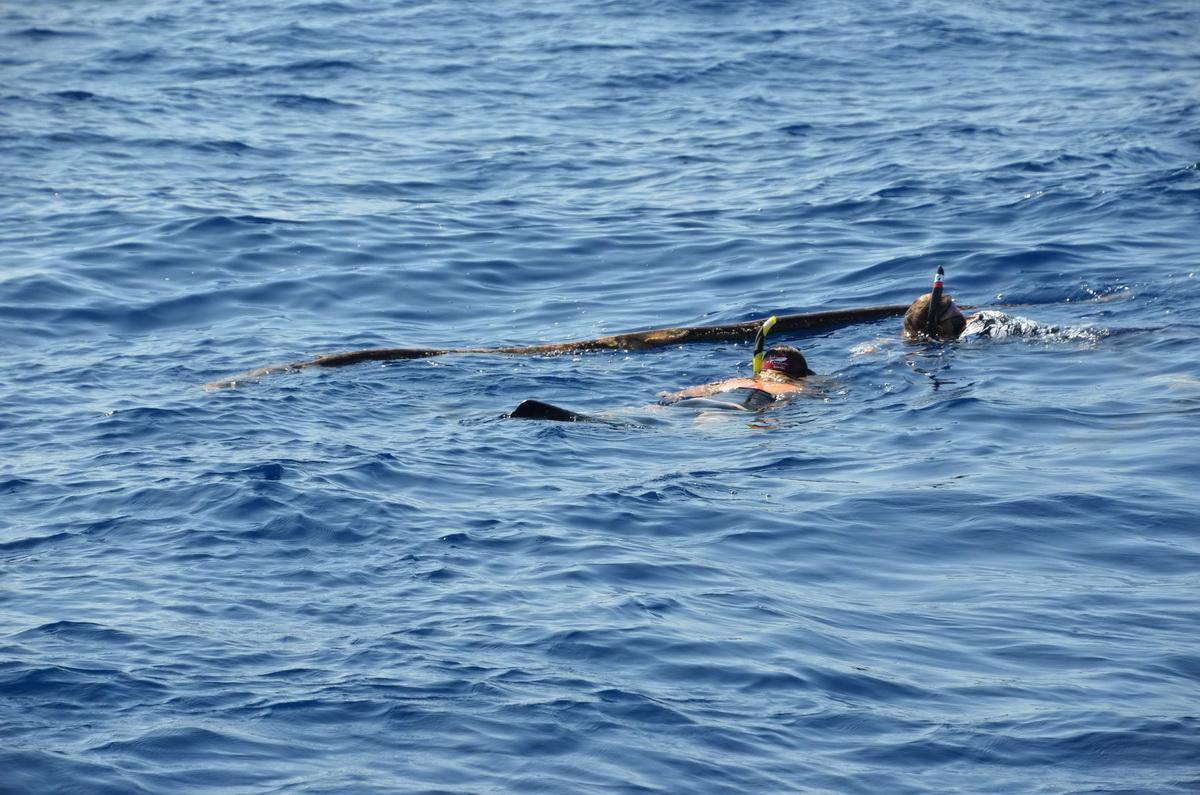 We then continued on our way back to the harbor with the 70 pounds of debris that we removed. We end our outings by properly disposing of the plastic and other trash.

Join Us on the Next Debris Dive Outing

We will be back to give it another try on January 30th.  If you live on the island, or are going to be visiting, join us if you can! You can sign up by contacting Jack’s Diving Locker:  email or you can call them at 808-329-7858. 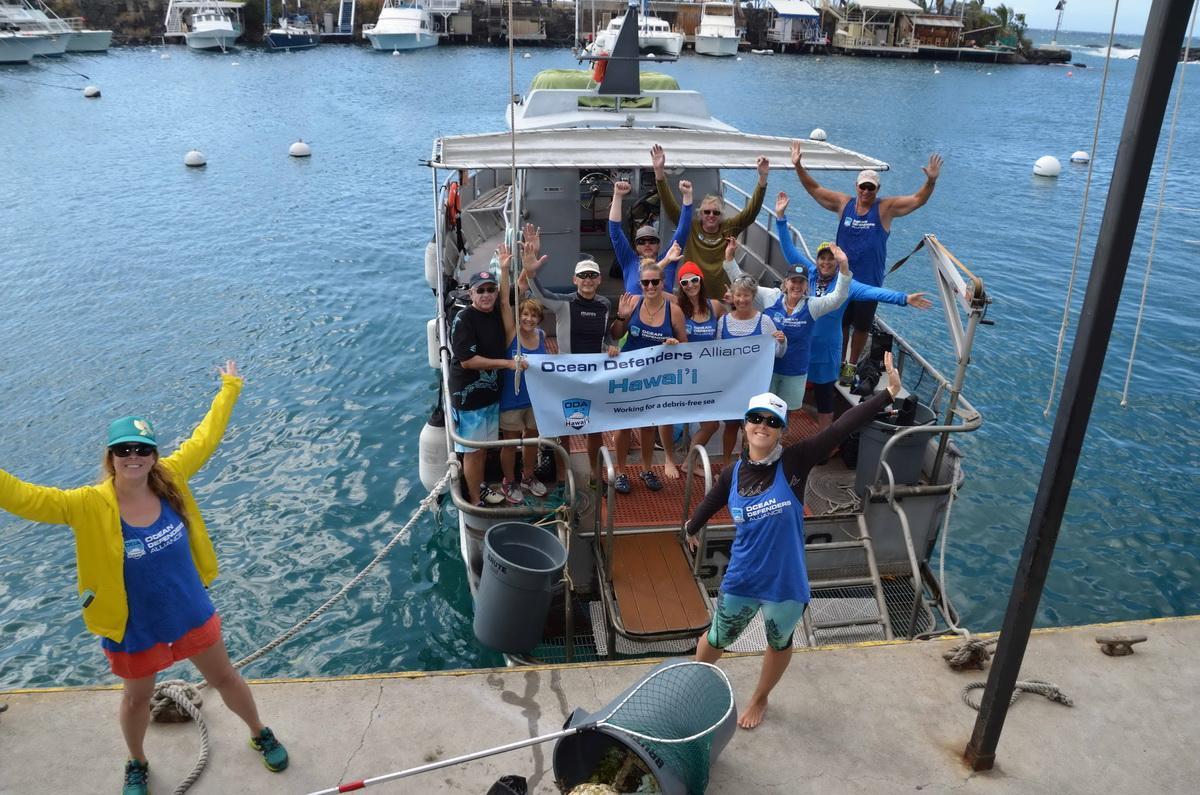 We’re honored and excited to be working with Teri, Jeff, and everyone at Jack’s! You guys are awesome and wonderful ocean stewards, and we look forward to the good work we will do together.