From the depths of Palos Verdes to an art gallery in Santa Monica—one eventful week in August! 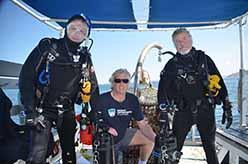 Dive Crew Al Laubenstein and Jeff Connor with Captain Kurt Lieber in the middleOn Saturday, the 10th, we headed out to Palos Verdes to hunt for more abandoned lobster traps that we have been finding with regularity this summer.  Our all-volunteer Dive & Boat Crew was: Al Laubenstein, Jeff Connor, Mike Jessen, Jim Lieber, and me.  Our first stop was a site near Old Marineland (OML).

We departed our slip in San Pedro under cloudy skies, but the sea conditions were on our side with waves less than two feet.  Local divers provide helpful location coordinates for us, and in this case two of our own divers were instrumental in locating an abandoned lobster trap.  Al had seen a trap here a couple of weeks ago.  He and I searched for it on one of our recent dives, but could not find it.  This time Mike said he knew right where it was.  He couldn't commit to coming out on the boat with us, but instead, with his dive gear he could swim out from the shore and physically show us the location. 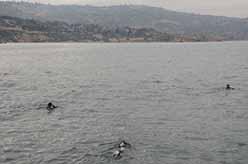 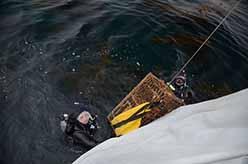 We coordinated our meeting time with Mike, and when we got to the site, he was already in the water waiting for us! Jeff and Al jumped in the water and all three of them swam over to where Mike thought it would be.  They dropped down and six minutes later we could see a lift bag break the surface.  Six minutes!  Nice going Mike.  You are "hired"! 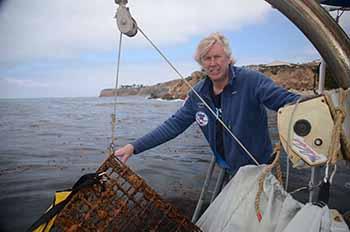 After getting the trap aboard our boat Clearwater, we removed all the life forms from it as Mike swam to shore and headed back home to Victorville.  We are thankful to Mike for making that trek. 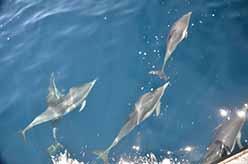 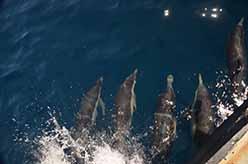 We then headed out to another area where we had found three traps and a couple hundred feet of polypropylene line on August 3rd.  Al and Jeff used our new underwater scooters to go out searching.  They didn't find anything, so in the future we'll do one more dive here to verify that we have thoroughly cleaned this site.  On our way home, as the skies cleared and the water turned tropical blue, we were escorted by a large pod of common dolphins-a GREAT way to end our day. 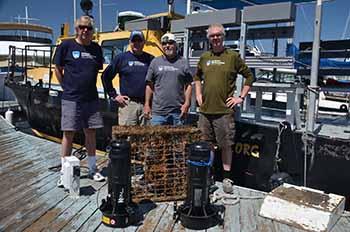 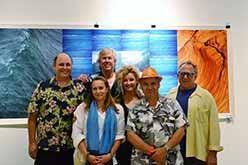 One week later on Saturday, the 17th, we had a little onshore fun as I gave a presentation to an environmental group called EarthWE.  ODA supporter Julia Ransom is friends with the two founders, Robert Mozejewski and Cheryl Bianchi, and Julia arranged with them to have me give a video presentation.  In addition to founding EarthWE, Robert and Cheryl run an art gallery in Santa Monica.  The gallery is one of many on the site of an old train station called Bergamot Station.

The walls of the gallery were tastefully adorned with the artwork of Michael W. Barnard, with music provided by DJ Nigel.  Between Michael's ocean-related images on the walls and Nigel setting the mood with socially conscious music, it was a great ambiance to talk to folks about what is going on with our local ocean waters and how a small group of seriously dedicated volunteers is making a meaningful impact on our degraded underwater world. 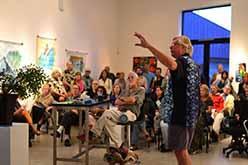 The audience was very attentive and inquisitive.  Afterwards, the question and answers session lasted longer than my presentation!  It is encouraging to see more people become concerned about this deadly debris that so easily can be "out of sight, out of mind."

It was a fun night for all.  Thanks to Beth Deck for taking charge of the ODA information and merchandise table, as well as taking the pictures.  Thanks, John Milligan, for helping out wherever was needed.  Special thanks to Julia Ransom for helping to organize this event.  With all of our hectic schedules, at times it had to feel like dolphins herding sardines.  No easy task, but it worked.  Thanks also to Robert and Cheryl for letting us use their gallery, and for providing the food and drinks.  Let's do it again next year and we look forward to meeting more of our wonderful supporters there! 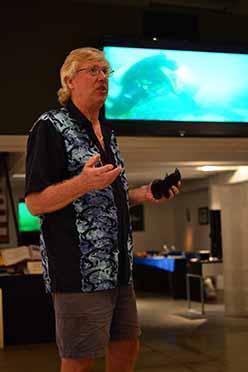