With our flagship LegaSea running great now, we headed out with a dive team for the third week in a row.  We left our slip in San Pedro early on Sunday, May 20th. 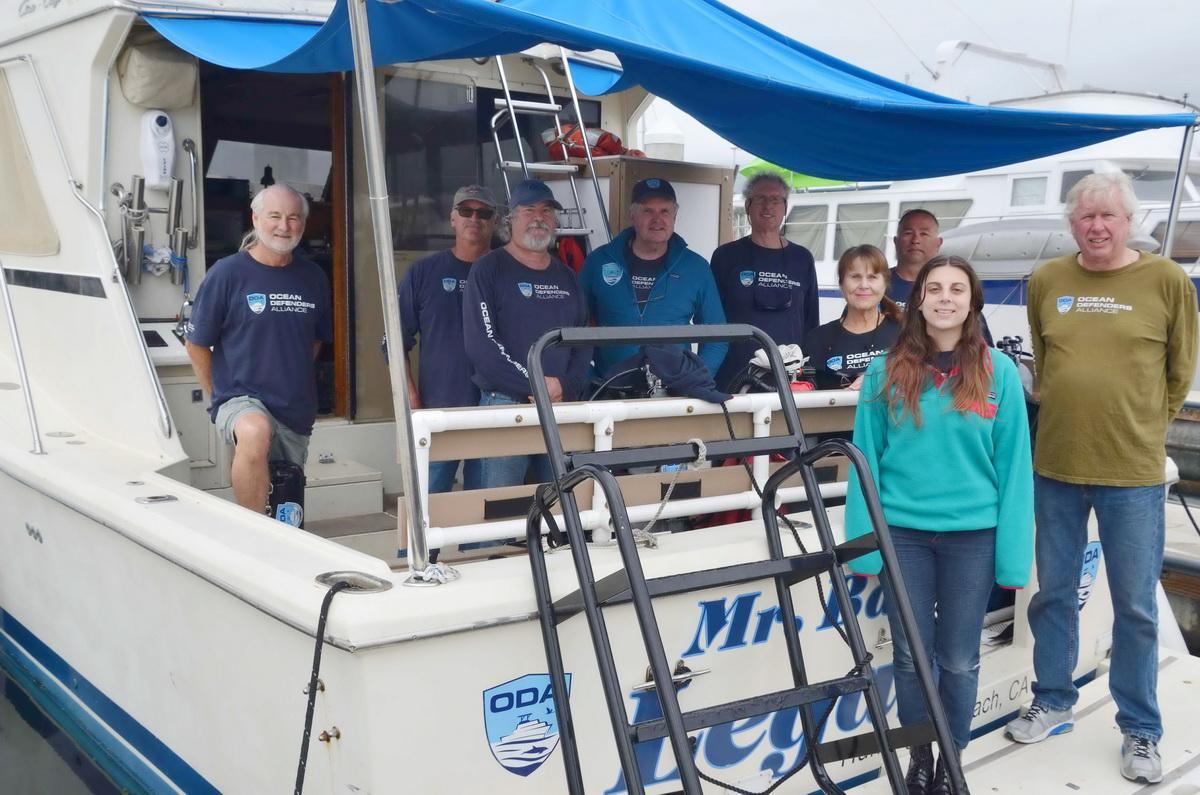 As is typical for this time of year, the skies were overcast and there was actually some drizzle coming down.  This is perfect weather for diving, so you don’t get overheated whilst wearing a 7mm-thick wetsuit.

Our destination was a site we found last year, a few miles off the coast of Long Beach, California.  The very first time we dived on the site, we removed three traps. But because underwater visibility (UW vis) was so bad, we had to stop activity after 20 minutes and bring our divers up to safety.

This time things didn’t look very promising either.  The water was a deep green, indicating there was a lot of stuff in the water.  When we arrived at the site, our depth finder let me know we were right over our target, which was 80 feet down.

Dennis Berube, Mike Jessen, Al Laubenstein, and Bob Walls were the dive team.  They geared up, did their safety check, and took the plunge.  Deck crew was: Jeff Connor, Lisa Davis, Jim Lieber, Brooke LaDouceur, and myself. We handed the divers their DPV’s (Diver Propulsion Vessels) and then they began to descend using the anchor line as their guide. 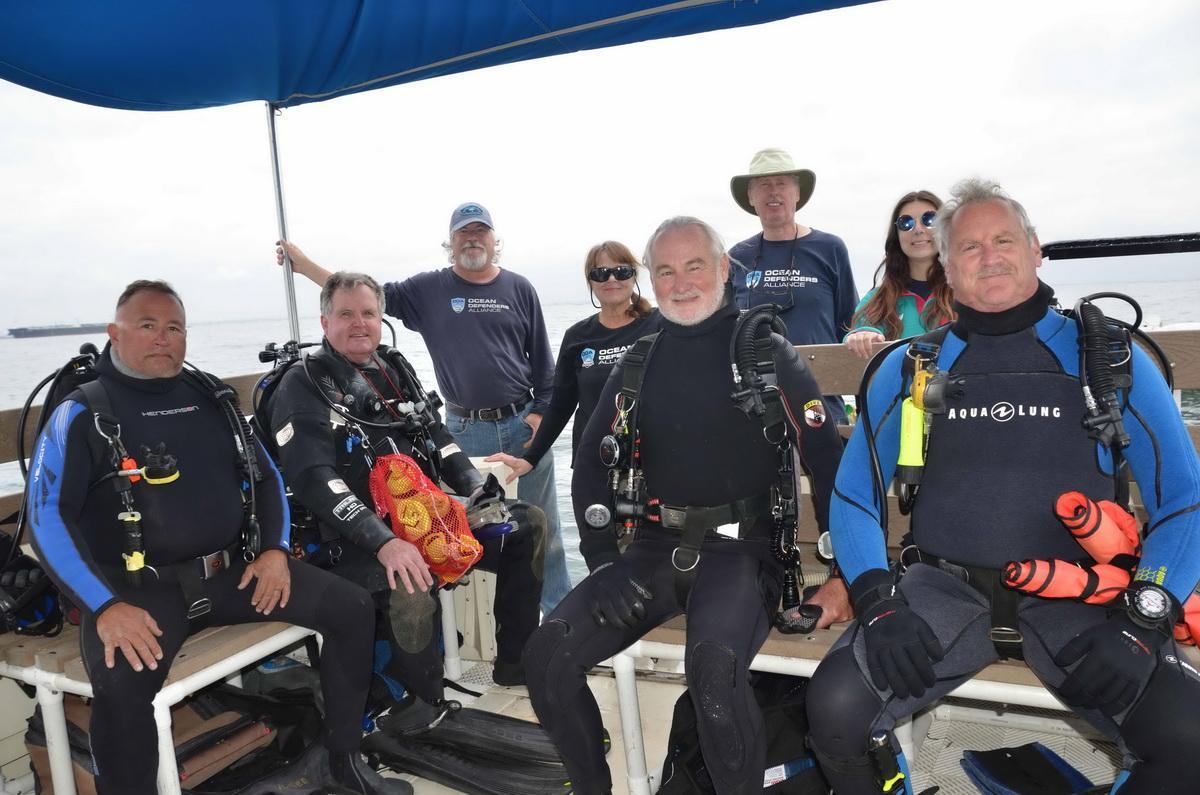 We could see them from the surface until they got about 10 feet down, then they disappeared… 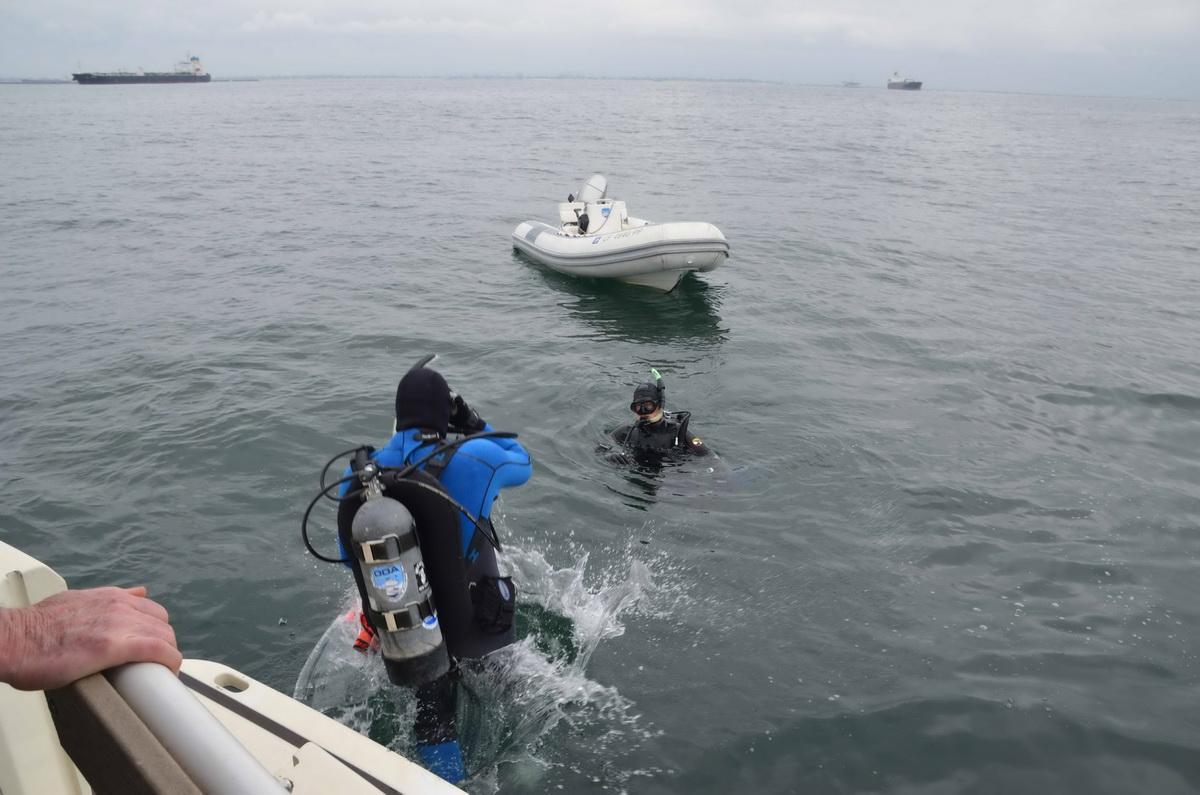 Jim and Brooke got the RIB (rigid inflatable boat) fired up and they started to follow the divers’ bubbles so they could be close-by in case they needed any assistance.  Within 10 minutes there were two lift bags bobbing on the water.  Nice sight!

Even before the RIB got near those lift bags, another two popped up a short distance away.  Even nicer sight! 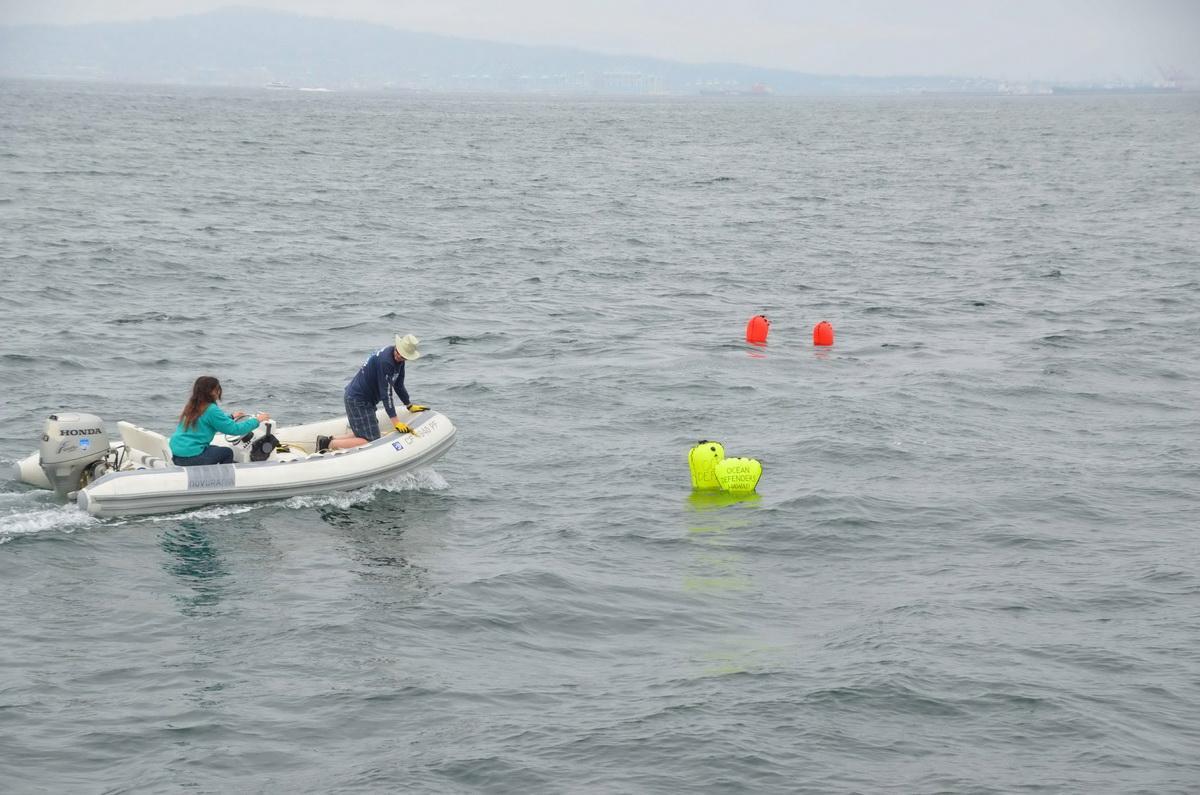 The RIB team attached a line to one of the lift bags and towed it to us on the LegaSea.  They hollered to us that it was a trap, so that means that we need to use the crane (called a davit) on our front deck. We hooked the trap on to our davit line and hauled it up and onto the deck.  Next, they repeated the same procedure and soon we had a second trap onboard.  By that time another set of lift bags broke the surface.  Yep, it was a third trap! 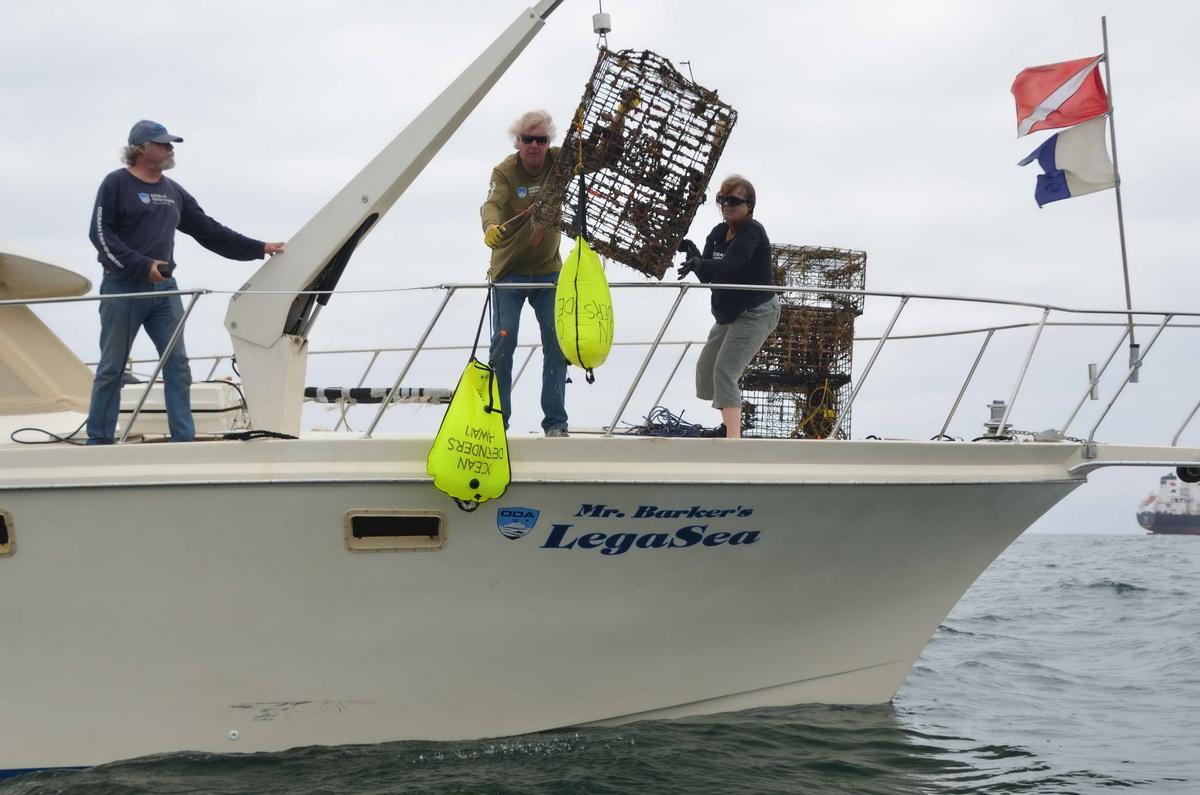 The divers surfaced right after that and as they climbed aboard I asked them how the UW vis was, they said it was actually worse than what we had last weekend, which was 6-7-foot vis.  This time it was about 4 feet…

We all marveled at how good these divers were, to navigate their way around a debris field and not lose sight of their dive buddy says something about their skills and comfort working together.

Round Two – More Traps Knocked Out!

We took a one-hour break to let them outgas and warm up a little.  What we mean by “outgas” is this: During dives, nitrogen builds up in your blood, and can create bubbles in your blood.  If they get too large they can cause the bends.  Divers do a surface interval (break) to allow for those bubbles to dissipate.

Then all four divers entered the deep green sea once again.

Just like before, we had lift bags popping up quickly.  And soon the RIB had hauled two more traps over to the LegaSea where we hauled them aboard.  This time one of the traps had lobsters in it. 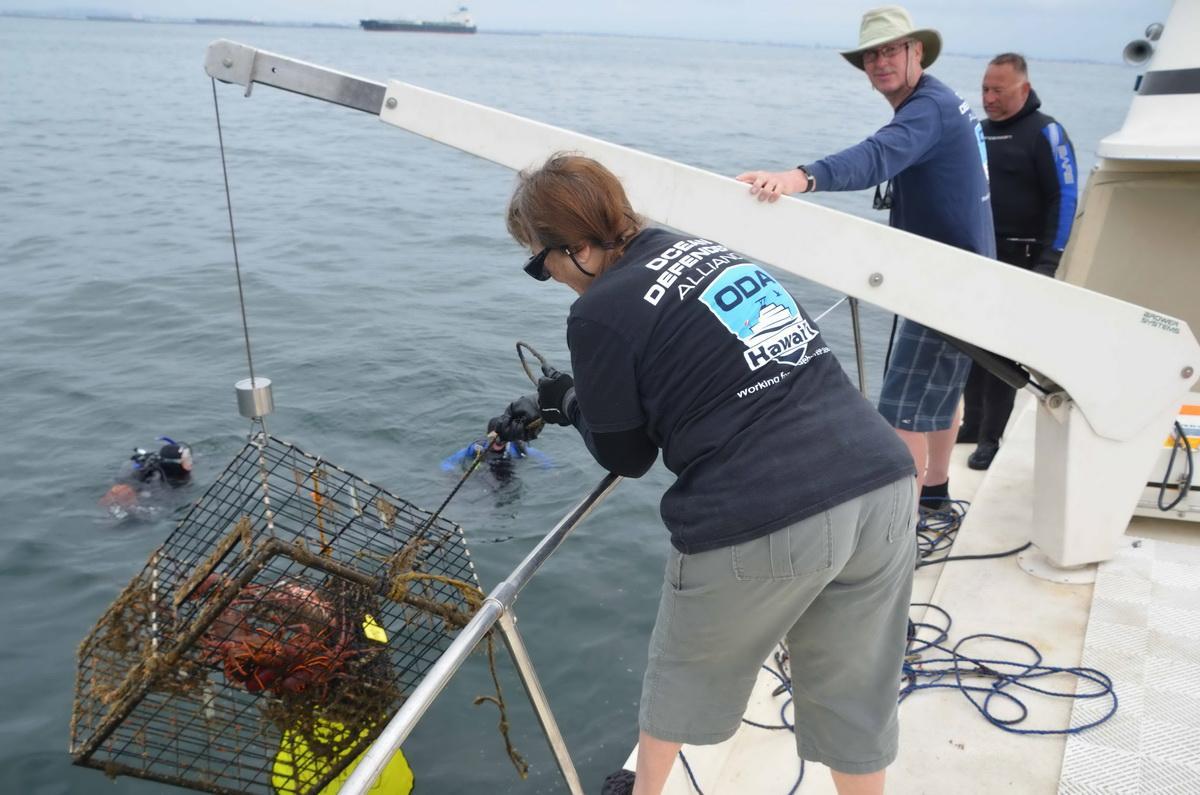 As the divers got back on the boat, they told us that while underwater they set three lobsters free from one of the traps, and the other trap had lobsters in it, but they couldn’t get it open.  So, we had a party on the front deck where we broke the little critters out of their prison (where they would have died), had them pose for a few pictures and soon they we back in their deep green home. 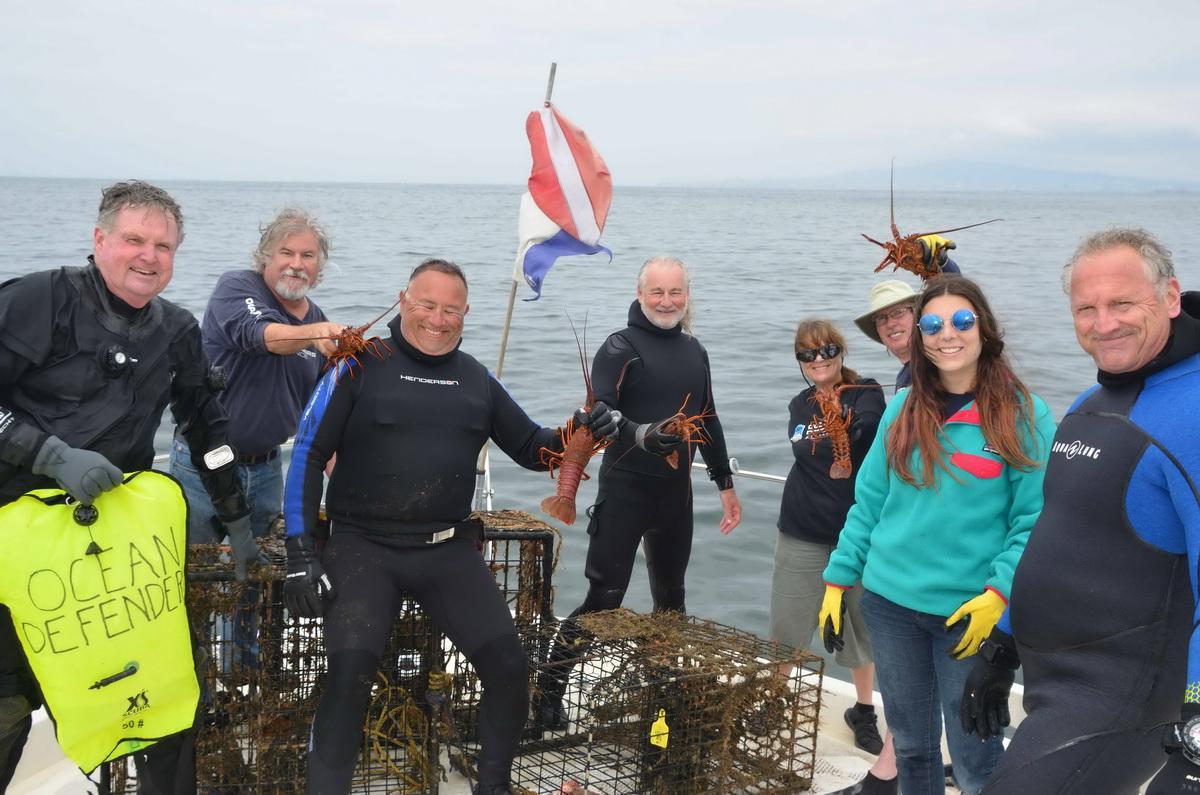 The crew really enjoyed seeing live animals sent back to their habitat! 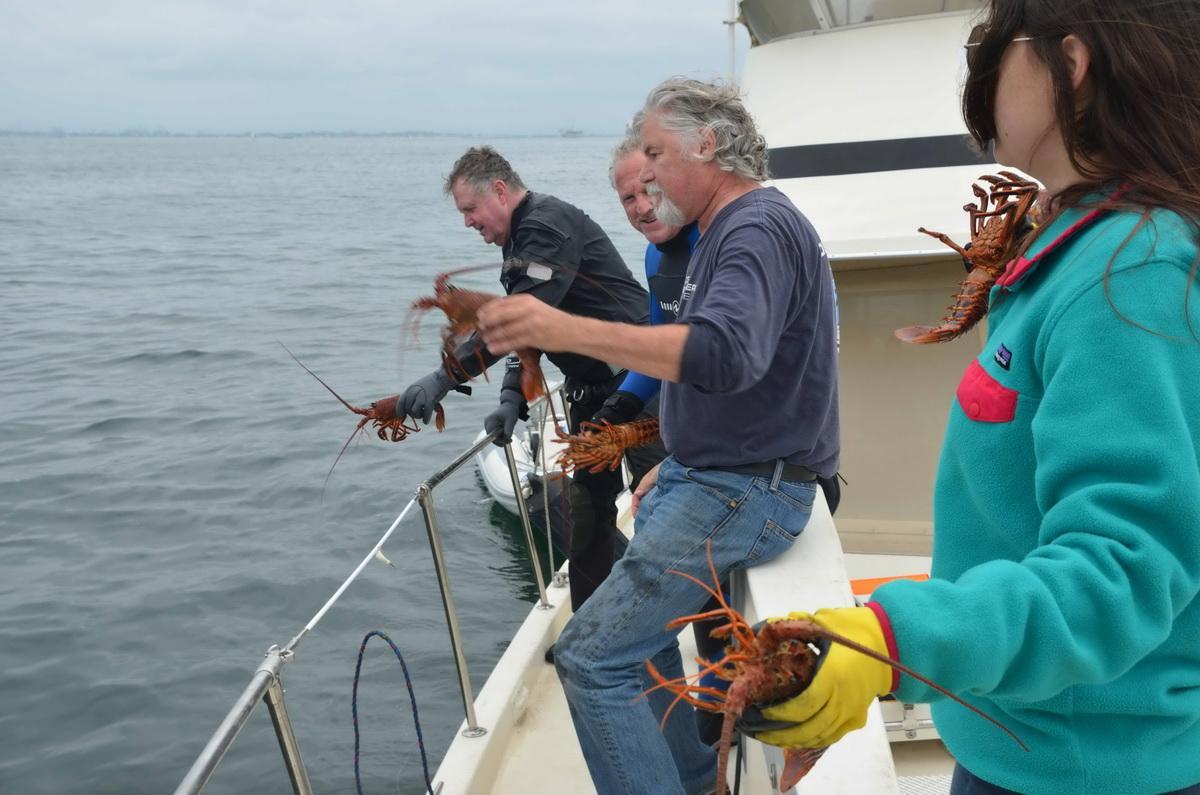 More Marine Life and Habitat to Save

As Arnold Schwarzenegger would say, “We’ll be back.” There’s more debris here, which means more ocean wildlife to defend, so we’ll return soon to haul it out! 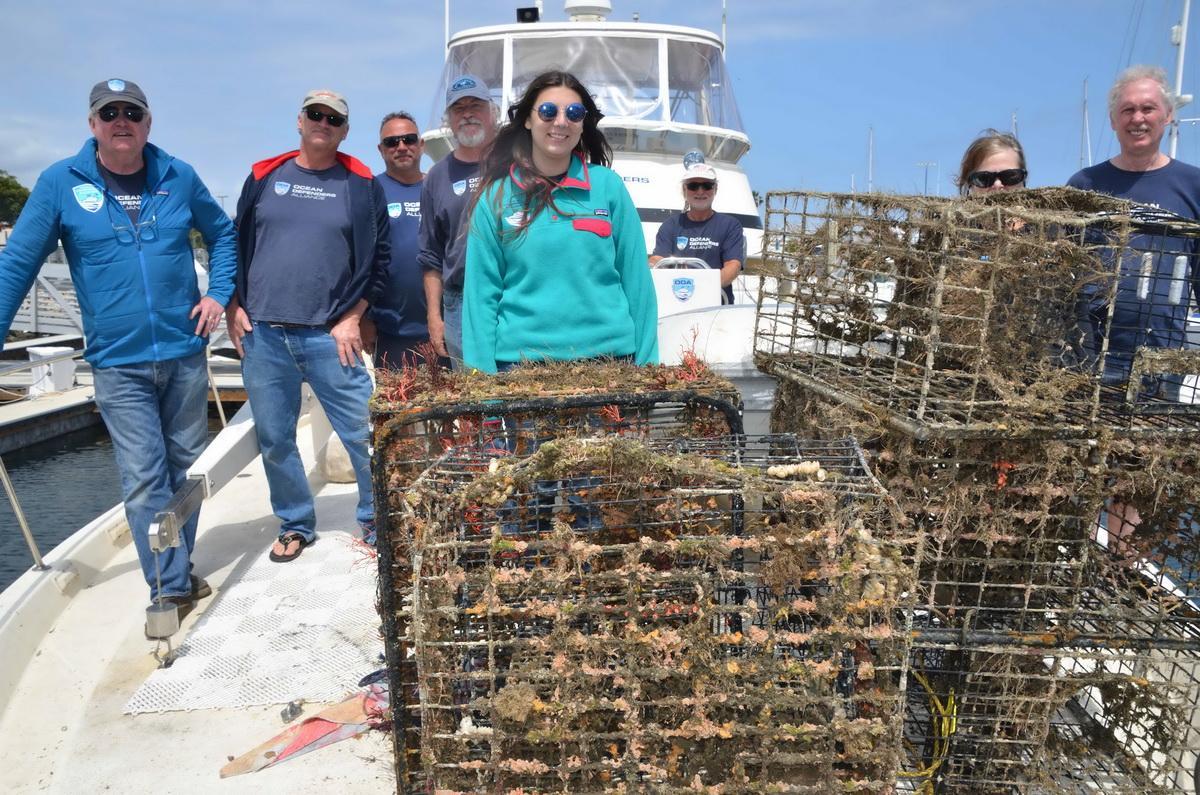 This was one of our most effective hauls. We tied our record for how many traps we got in one day – five!  Five killer traps, plus we set eight lobsters free to live another day.

You can make a lobster smile…buy supporting the trap-removing work of ODA! Please make your donation and start the smiles today. :-)