Update: Check out this short video showing the underwater work:

Things were looking kind of dicey for another outing to remove abandoned lobster traps, but we took a gamble.

The fog has been really thick, which is typical this time of year.  As the temperature gets colder, sea temps combine with that cold air and creates the marine fog.  It was so thick that the weather service put out an alert stating that if your vessel doesn’t have radar, don’t go out of the harbor.

While we do have onboard radar, it is still unnerving when you can’t see more than a couple hundred yards around you.  When we met at the dock the place was gray with clouds.  We decided to just head out to the mouth of the harbor and see what it looked like there.

Once we got there it didn’t seem so bad, so we headed four miles out to a new site that we haven’t hit before. 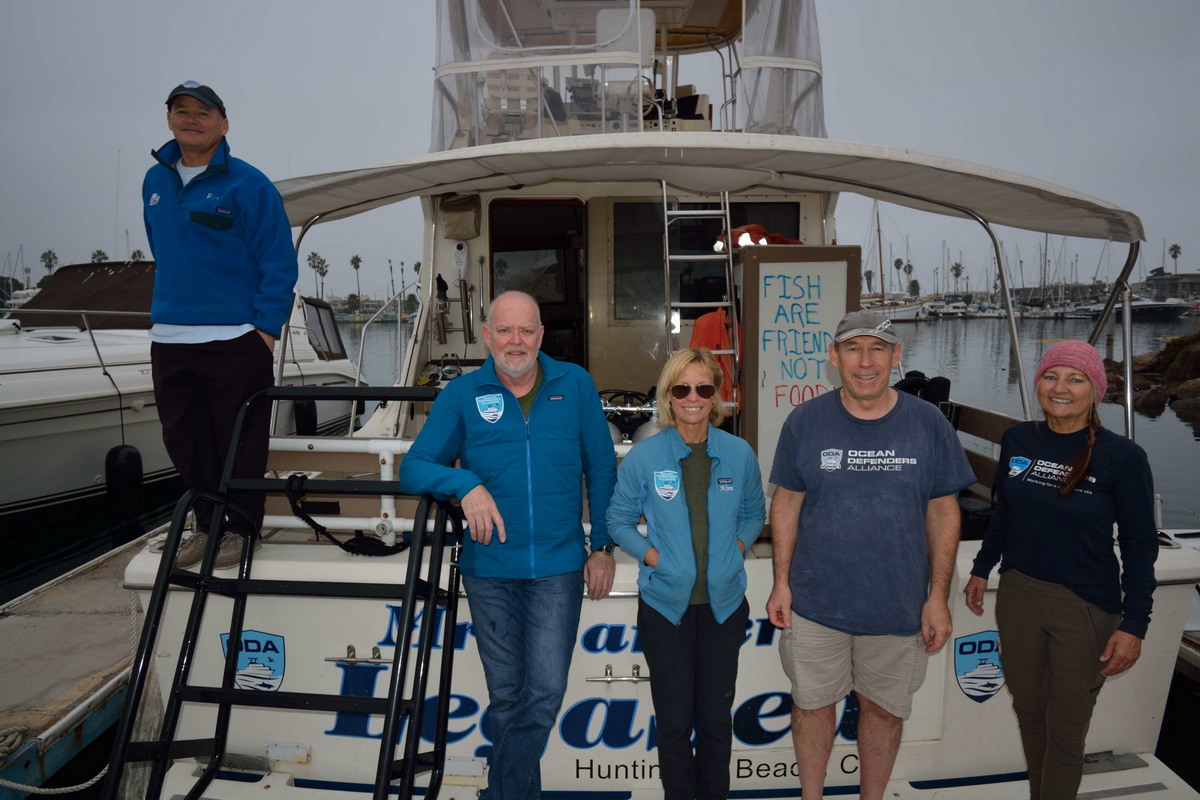 The History of the Sunken Vessel

The Kopco Star was a kelp harvesting boat that was used to gather the once abundant kelp that grew all around southern California.  When it was doing its job back in the 50’s, it was deemed sustainable because the boat only cut the top four feet of the plant off.  Since kelp can grow one foot in a day, it didn’t take long for the plant to recover.

Then one night in October 1963, the boat sank quickly after taking on a huge load of kelp.  All crewmembers were miraculously saved by a passing Navy tugboat.

The boat is just 51 feet long and 28 feet wide.  It has been permanently “berthed” in 85 feet of water ever since that eventful day.

We took a chance on looking at the site knowing that any kind of structure will host a variety of fish and invertebrates. 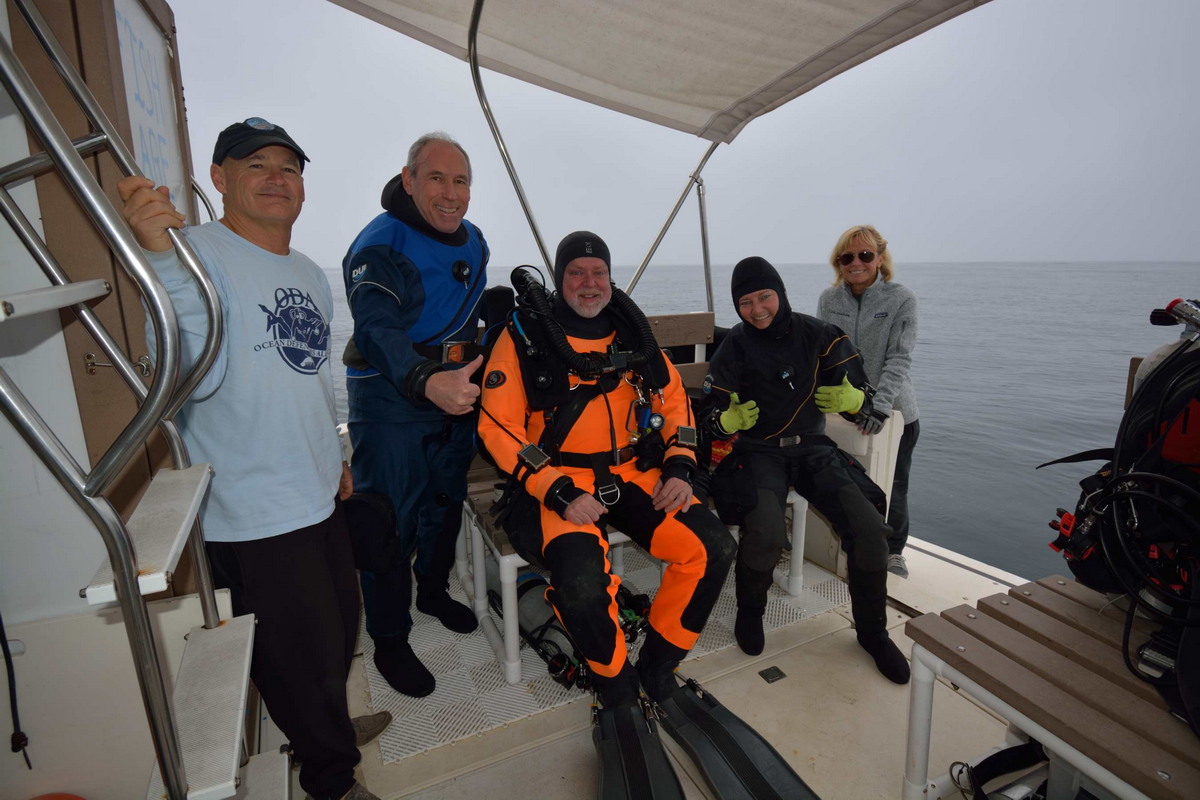 Divers for this trip were Kim Cardenas, Geoff Walsh and Mike Wynd.  Helping out on the deck were Rex Levi and Sue St. Sure.  It was a small but experienced crew, so I thought we could easily manage the divers and whatever they brought up…

Mike headed down first, with Kim and Geoff ten minutes behind him.  Within minutes of Kim and Geoff reaching the bottom we saw two lift bags break the surface.  Wow, that was quick!

Because we didn’t have enough people to safely operate our boat Mr. Barker’s LegaSea and our small boat (a rigid inflatable boat – RIB), we decided to not deploy the RIB.  The small boat makes it a LOT easier to hook the traps up to the davit line on the LegaSea, but not to be this day. 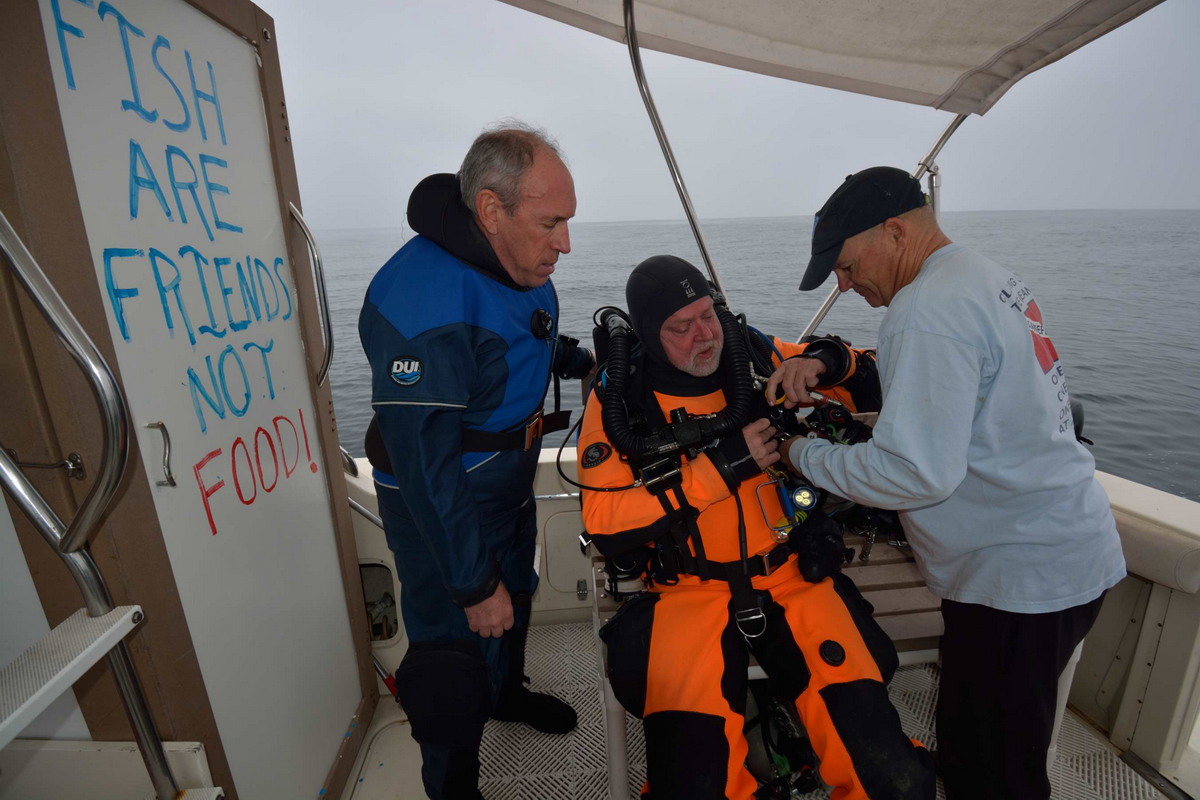 How Many Traps Are There?

There was a really strong current running and that set of lift bags floated tantalizingly close by us on the boat, but just outside our reach.  Just as it passed us, we saw two more lift bags right near where the first set had surfaced.  Not even five minutes had passed!

Then once again we saw bags at the surface, this time there were three of them.  What the heck was going on?

A typical lobster trap weighs about 75 pounds, which requires only one lift bag to get it to the surface.  The bigger traps weigh about 125 pounds and need two lift bags.  So, what we assumed was happening was that the divers were finding the big traps.  But had no idea what was going on with that three-bag set.

After 30 minutes of bottom time, Kim and Geoff surfaced and climbed aboard.  We asked them what they found and why there were three lift bags on one trap.  They had no idea.

Once Mike climbed back aboard, we found out.  He ran out of lift bags but had found more traps and tied two traps together with the hope that 3 bags would do the job.

They certainly did the job! 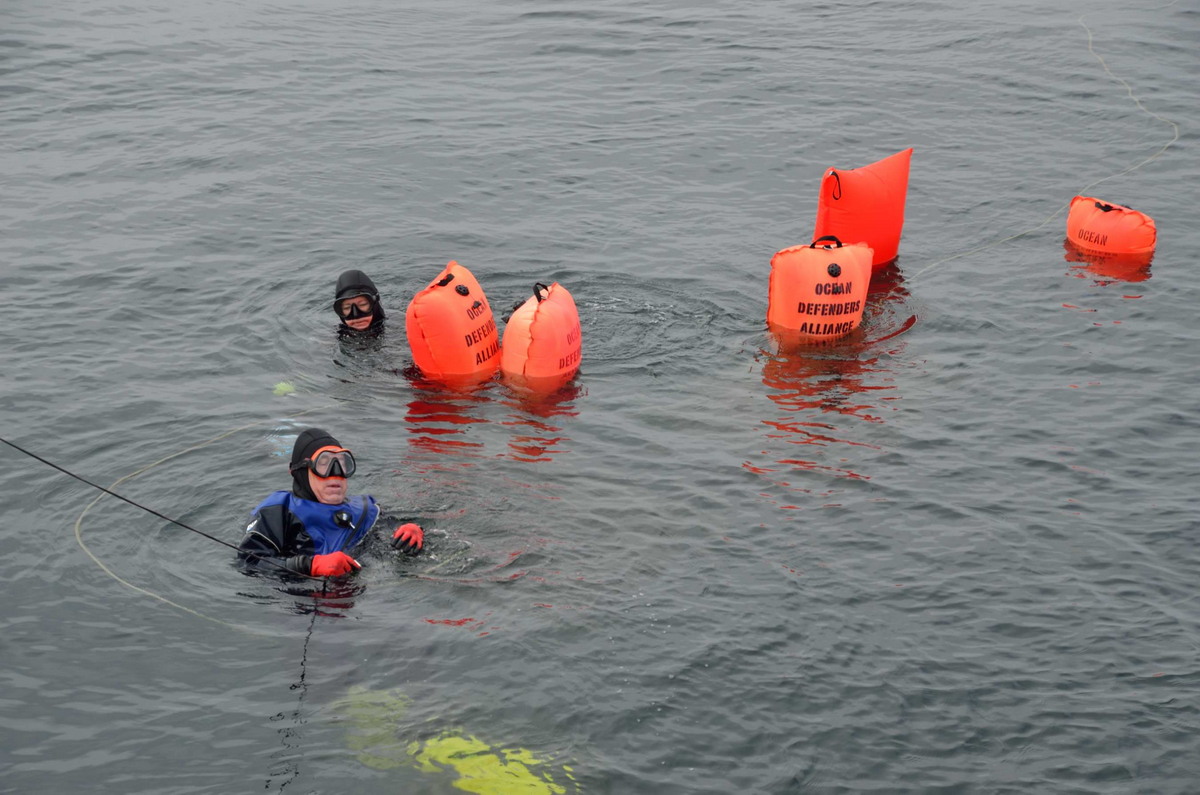 Now for the Hard Part

Once we had everyone back aboard, we pulled the anchor up and headed out to retrieve the traps and bags that were now so far away we couldn’t see them.  After we headed down the current line, we found all of them within 20 yards of each other.

We pulled up next to the first one where Geoff and Kim jumped in the water to try to attach the davit line to the trap.  Rex handled operating the davit (crane), while the two divers struggled the currents and waves to hook the trap.

It took a while, a LOT longer than it would have if we used the RIB, but eventually perseverance paid off, and we got the first trap on the deck.

Kim and Geoff were able to swim over to the other two set of lift bags and repeated the process.

When all was said and done, we had three huge traps on the front deck.  One of the traps had broken apart on its way up and we only got about half of it.  Plus, we had over 200 feet of trap lines. 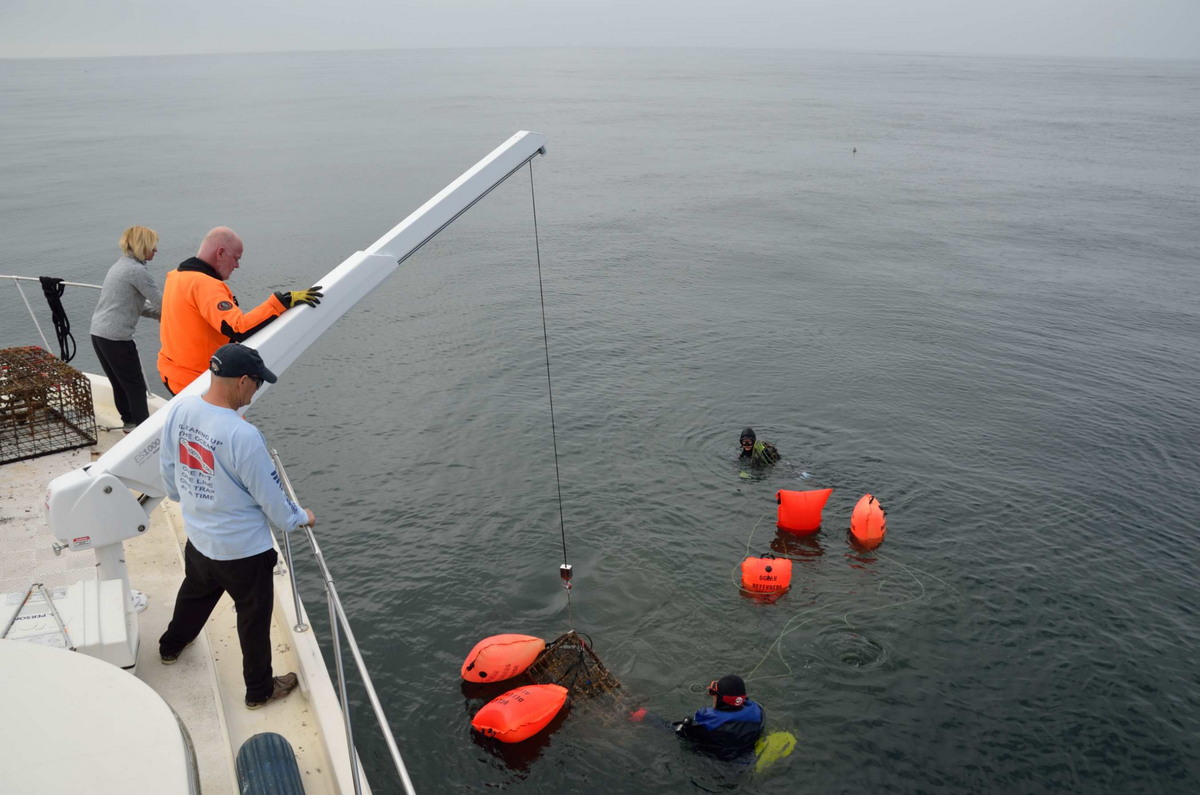 More Work to Do

After all that work, we talked about doing a second dive because there were still two more traps down there plus hundreds more feet of trap lines.  Kim said a lot of that line was floating in the water column.  This is exactly what we don’t want to leave behind because it’s a potential hazard for a whale, dolphin, sea lion, or turtle to get entangled in.

But the daylight was getting short, and we still had hours of work ahead of us once we got back to the slip.  So, reluctantly, we realized we had to come back another day and finish what we started.

We finally had all the traps off the boat with the boat and lift bags cleaned up by 3:30. There was no way we would have been able to do another dive and get back before dark.

As we were getting the traps off the boat, Rex noticed dozens of snail shells in the traps.  I had never seen this kind before.  They were all empty of inhabitants, and they were really big for snails, almost four inches in diameter.  If anyone knows what kind these are, please let us know. 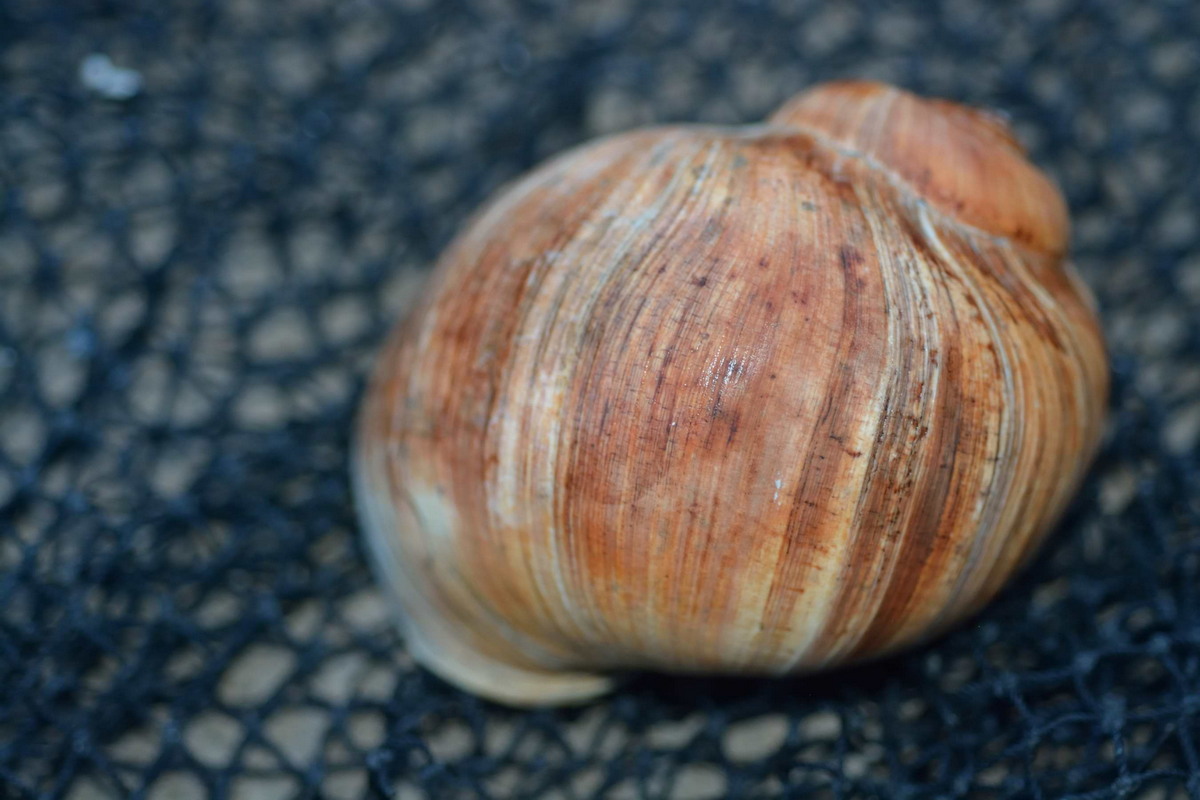 It turned out to be a great day on the water.  Seas were relatively calm, and the sun finally came out around noon.  We also were treated to hundreds of birds that were feasting on a bait ball not far from us on the boat.  Dolphins and sea lions were lazily dancing around us the entire day.  But we were too busy to get many pictures.  Suffice to say, this spot of the Pacific Ocean is alive! 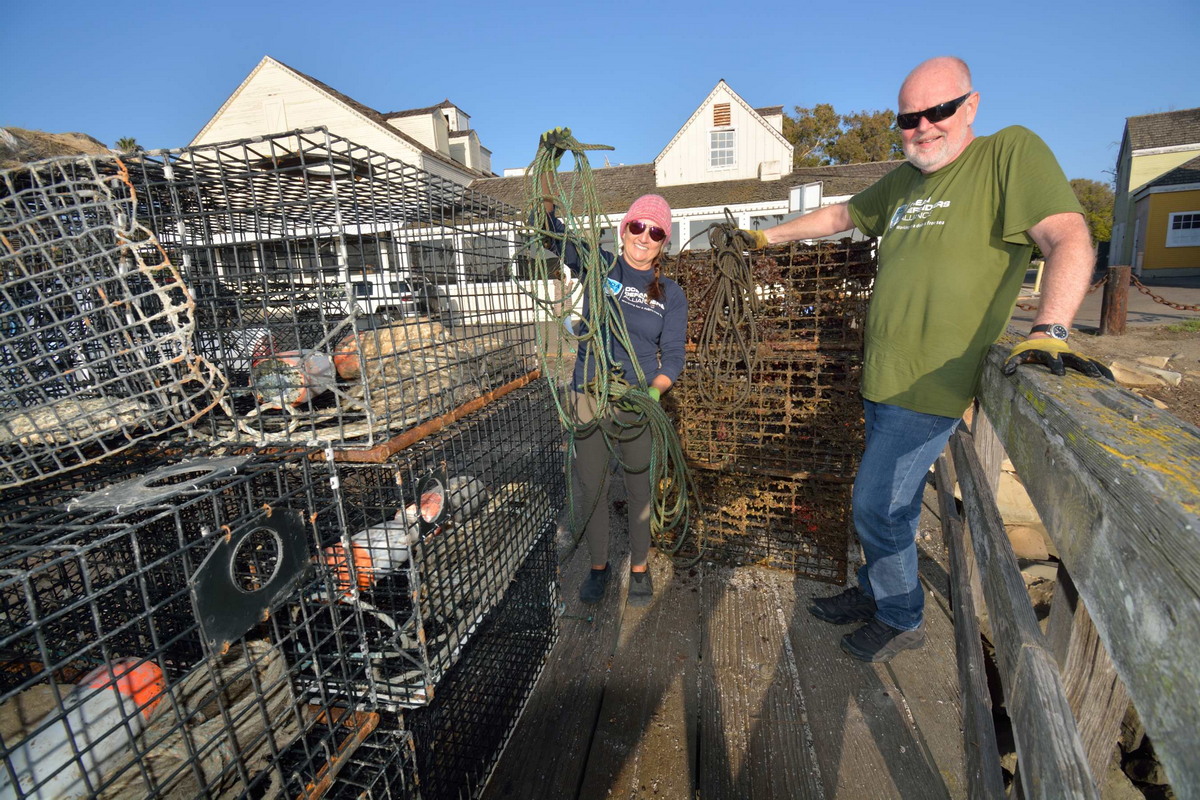 You can count on our crew to be back out there as soon as we can.  Thanks Geoff, Kim, Mike, Rex, and Sue.  You guys and gals were awesome!  And I’m sure everyone slept like babies that night…

If you’d like to join us on an outing, please check out our Volunteer At-Sea page! Thank you for caring about the oceans!