After four straight weekends of atrocious weather conditions in Southern California, we finally were able to get divers in the water safely!

On Sunday, September 19th, volunteer Captain Dave Merrill motored our flagship vessel Mr. Barker’s LegaSea out to a deep dive site where volunteer Rob Broesamle had seen marine debris – including out-of-season lobster trpas – scattered on one of his recent dives there.

The divers this day were: Erich Fertschneider, Geoff Walsh, Kim Cardenas, and Mike Wynd.  Rounding out the crew were Jeff Connor and Sue St. Sure. 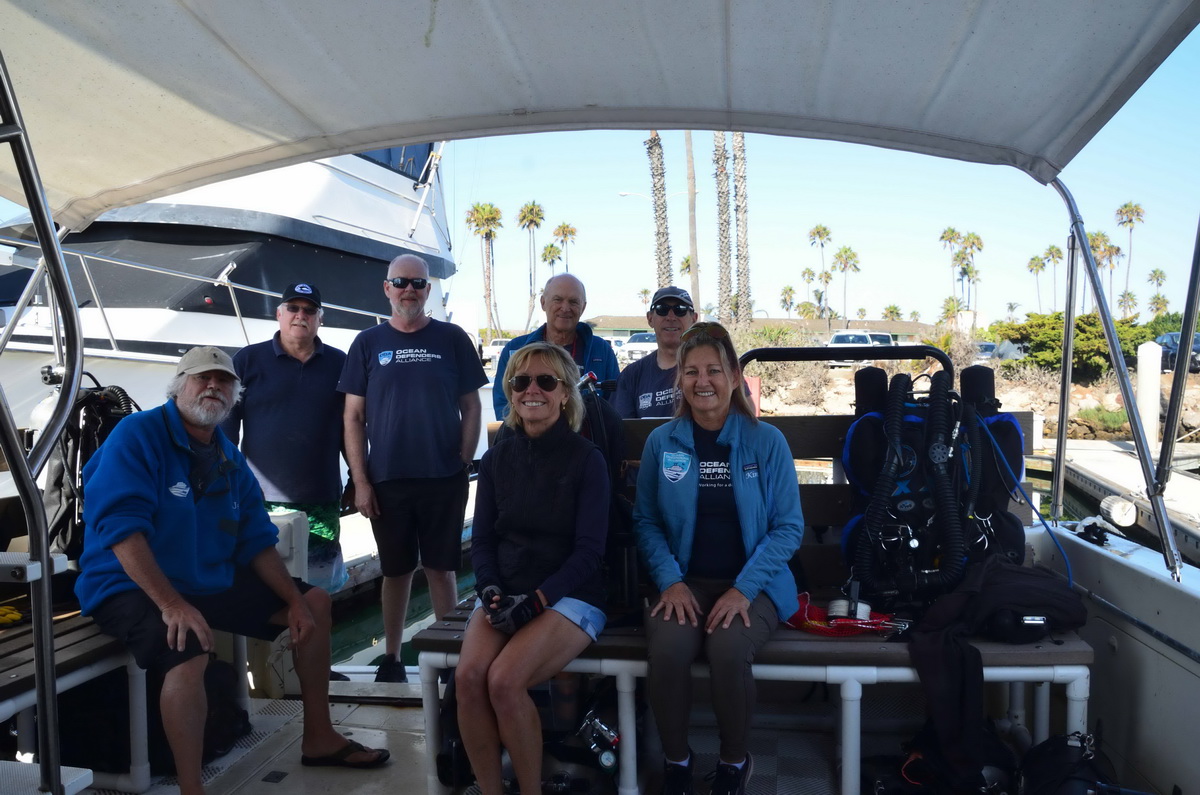 As they pulled out of Channel Islands Harbor, the seas were pretty rough with the waves at 2-4 feet.  But the winds were minimal, and as the day wore on, the seas calmed down.

We always welcome the wildlife sights along the way! 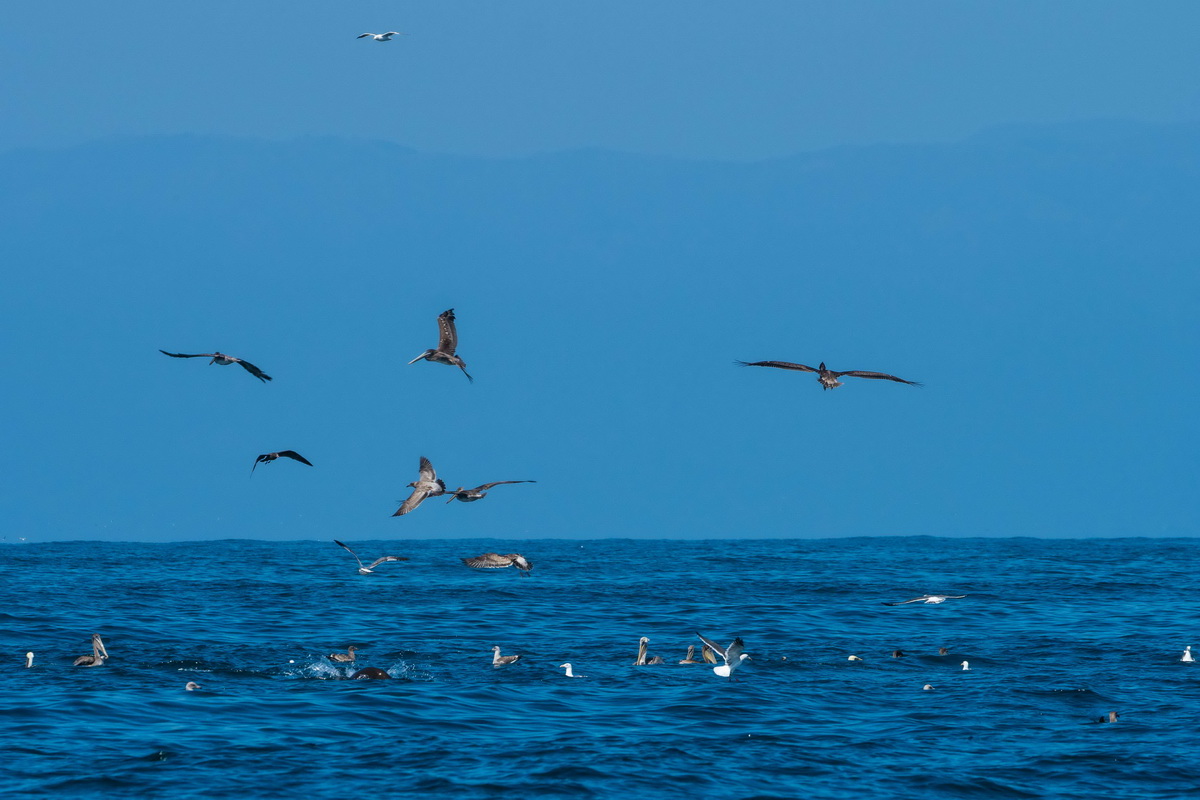 The dive site is called La Janelle Reef, and it’s about four miles outside the harbor.  The depth of the site was 80 feet, and some of the reef reached up to 70 feet.  Exactly the kind of rocky bottom that lobsters like to hang out in. Makes sense that there were lobster traps there.

Erich and Mike teamed up and headed down the anchor line, while Kim and Geoff followed a few minutes behind them. 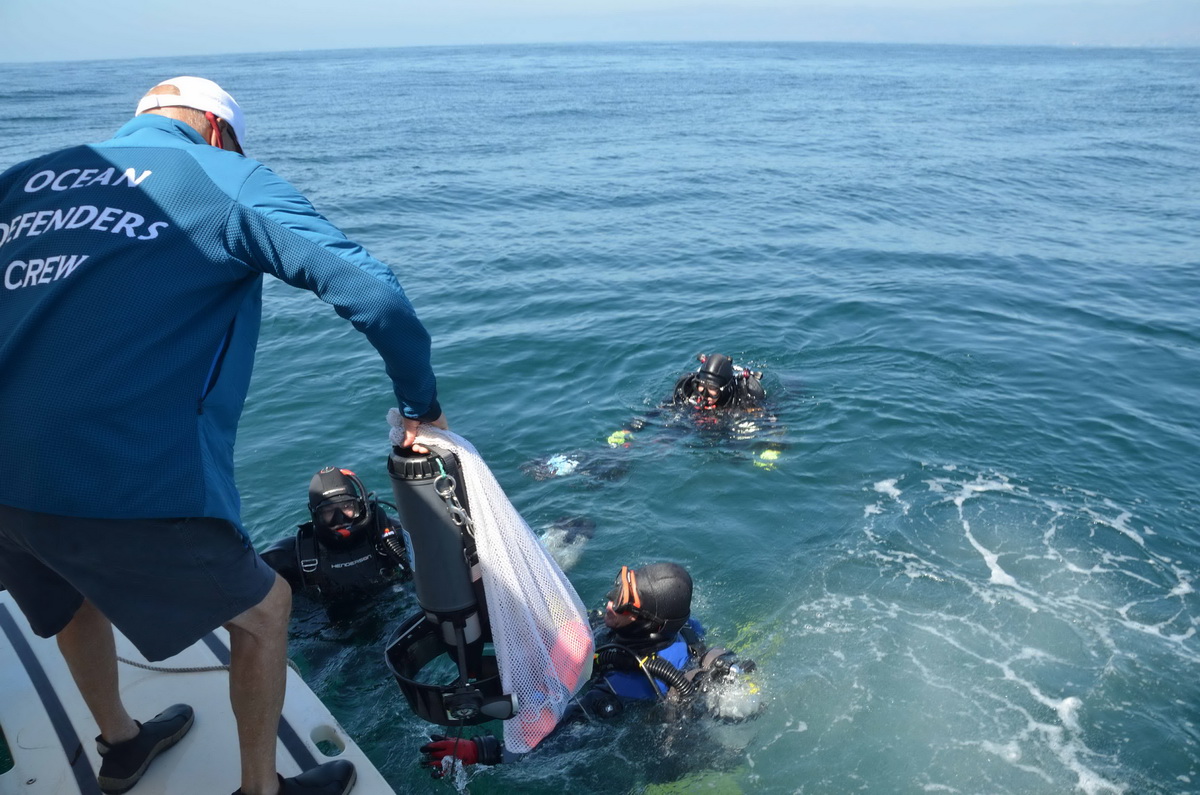 Captain Dave hands an underwater scooter to the divers. It will help them navigate more quickly to find the ghost gear.

Thanks to Rob’s GPS numbers, Dave was able to drop the anchor within feet of the dive site.

Pretty quickly, Mike and Erich found a really large, abandoned lobster trap and Mike attached a lift bag to it while Erich took some nice pictures as the trap – pulled upwards by the inflated float bag – jetted off to the surface. 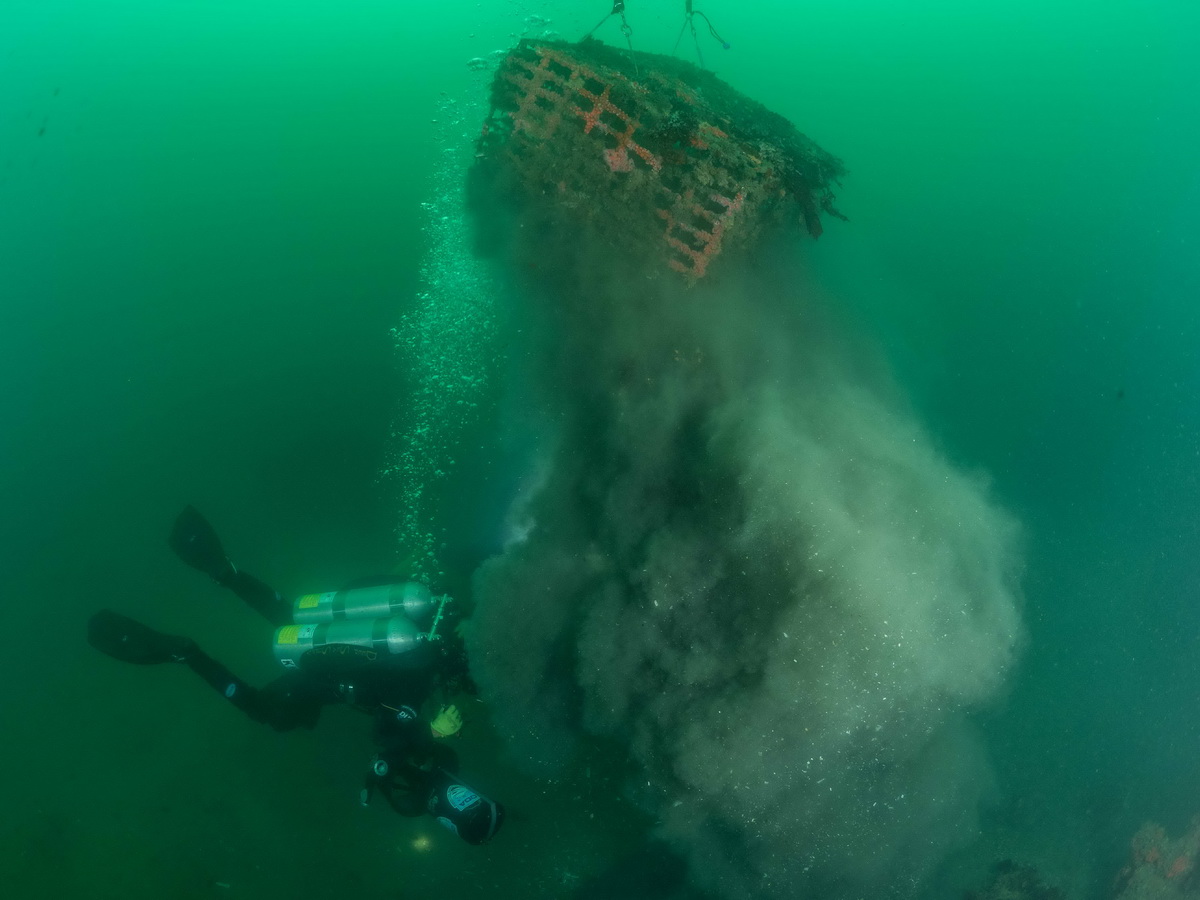 Meanwhile Kim and Geoff found some trap lines and brought them back to the surface at the end of their 30-minute dive. 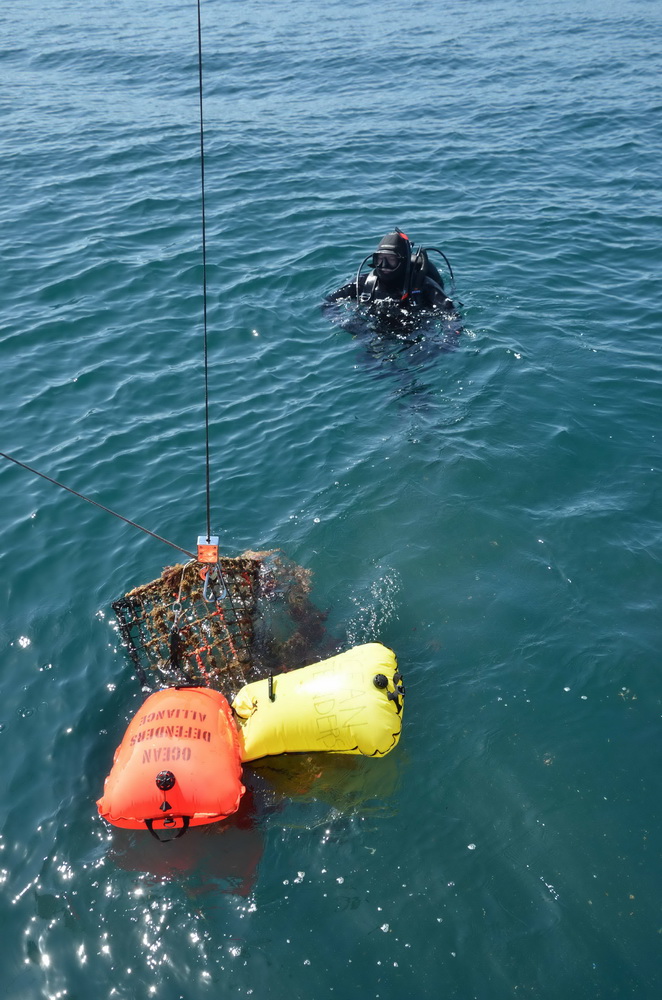 The deck crew could not get the trap onboard because they didn’t have enough people to help out. They would definitely need the help of our handy davit, which is like a crane.  So once the divers were onboard, Captain Dave pulled the anchor up and motored over to where the lift bag was floating on the surface.

This brightly colored bag is attached to the trap got floated to the surface. Now the team could attach a line to the trap to the haul it out with the hoist.

The deck crew guided the davit so that the trap could be lowered onto the boat’s front deck.

Captain Dave then brought the boat back to the exact location there were at initially, and set the anchor down again. 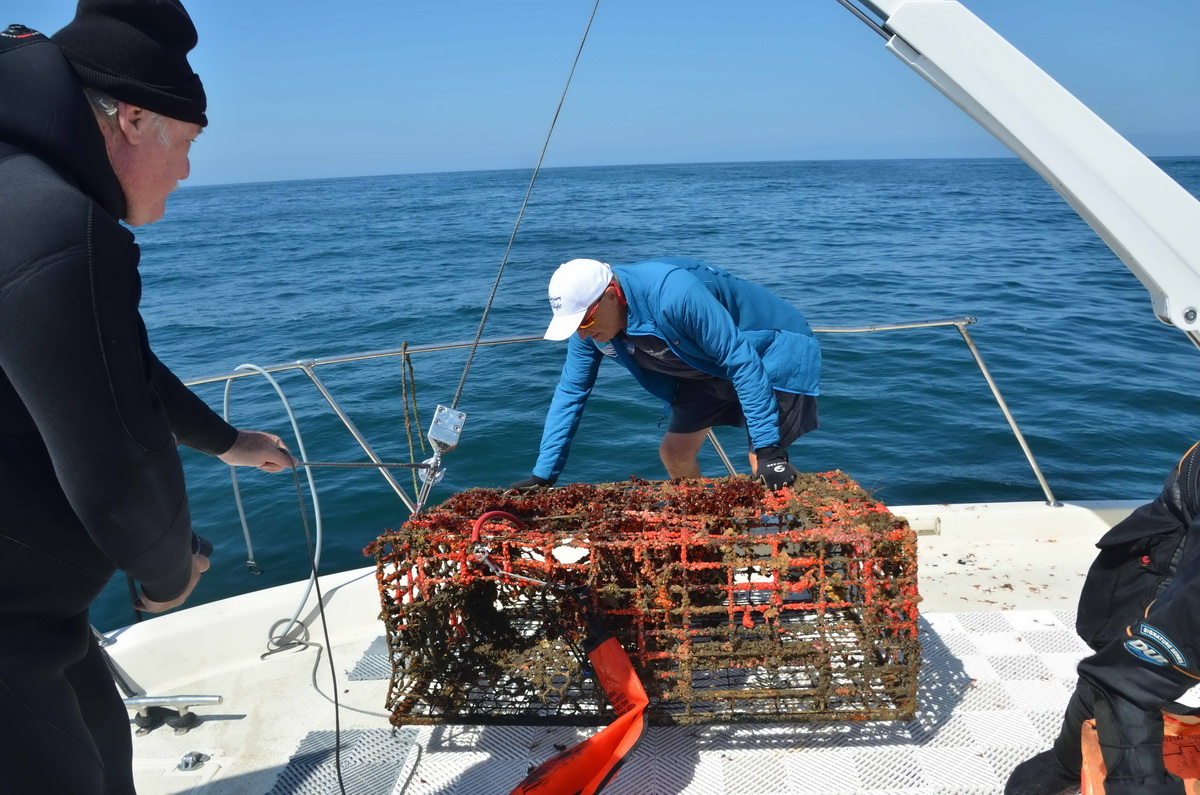 After a 90-minute surface interval (break from diving) Kim, Erich, and Geoff headed back down to see if they could find anything else to remove.  Unfortunately, Mike had technical issues with his dive gear and didn’t go on this second dive.

Let’s Get Another One

Because this site is so deep, the divers can’t spend much time down there.  Twenty-five minutes was all they had this time.  But it turned out to be enough to haul out another lobster trap!  This one was as big as the first one, but appeared to have been down there longer, by the amount of growth on it. 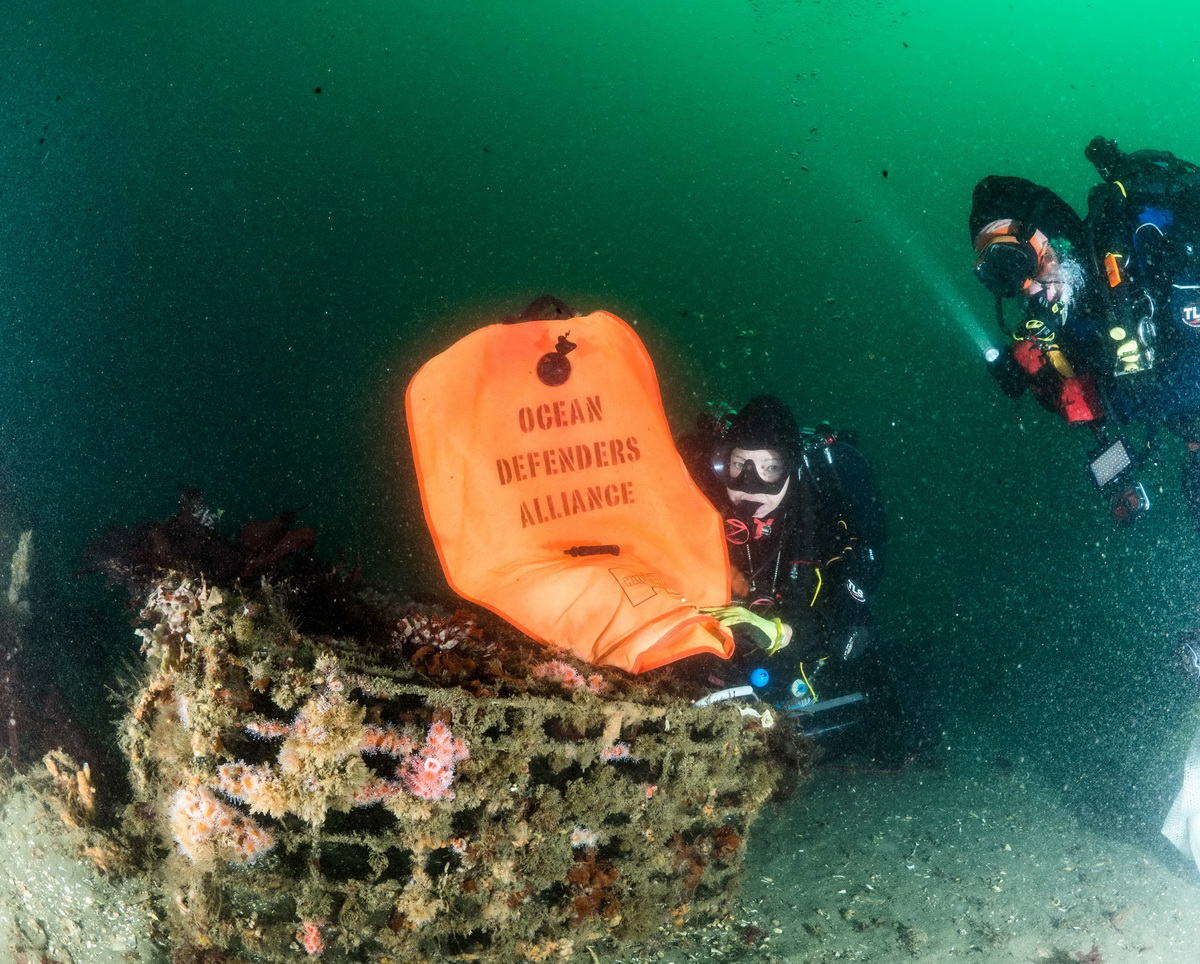 I’m on the Big Island of Hawai’i as I write this and wasn’t on this So Cal dive but Dave and Jeff reported to me the events to me. They added that everyone had a great time and the boat ran smoothly. 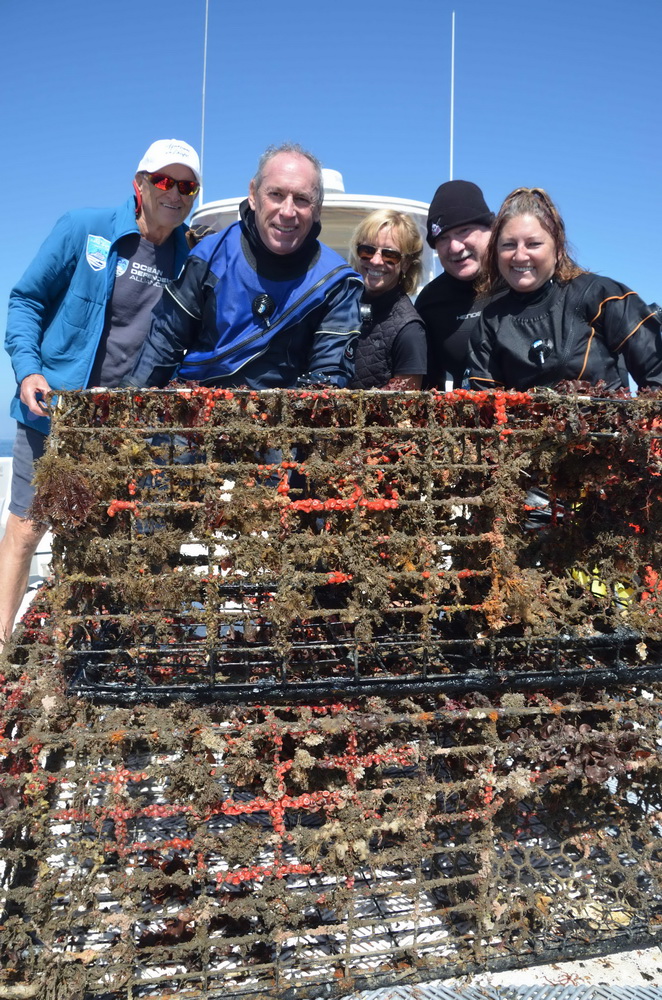 We’re so glad that Erich got all these underwater pictures. You just can’t convey with words what it is like to remove a trap, and as they say: one picture is worth a thousand words!  Boatloads of appreciation to you, Erich! And many thanks to Jeff for taking all the topside pictures.

First and foremost, thanks go to the ODA donors who make these debris-removal outings possible! Without you, we couldn’t free animals from entanglement or remove habitat-damaging fishing gear.

To Dave, Erich, Geoff, Kim, Jeff, Mike, and Sue: Thank you for your time, energy, and passion for clean oceans. You all made the waters of California safer for all forms of marine life!

To all who love ocean wildlife and want them to live in a clean, safe environment: Your support will be key in ensuring that we can keep removing hazardous debris like this! Your donation of any size is extremely meaningful!