On Sunday, August 30, a small group of ODA volunteers decided to give the Los Angeles Harbor breakwall another chance.  The last three times out at the site did not go well due to horrible UW visibility.  One week it was about five feet, another it was less than five feet, and this time?

We met up at the boat slip in San Pedro at 9 am and quickly got underway.  The skies were partly cloudy to start out, but there wasn’t much wind, and the sea surface conditions were like a pancake, absolutely flat. 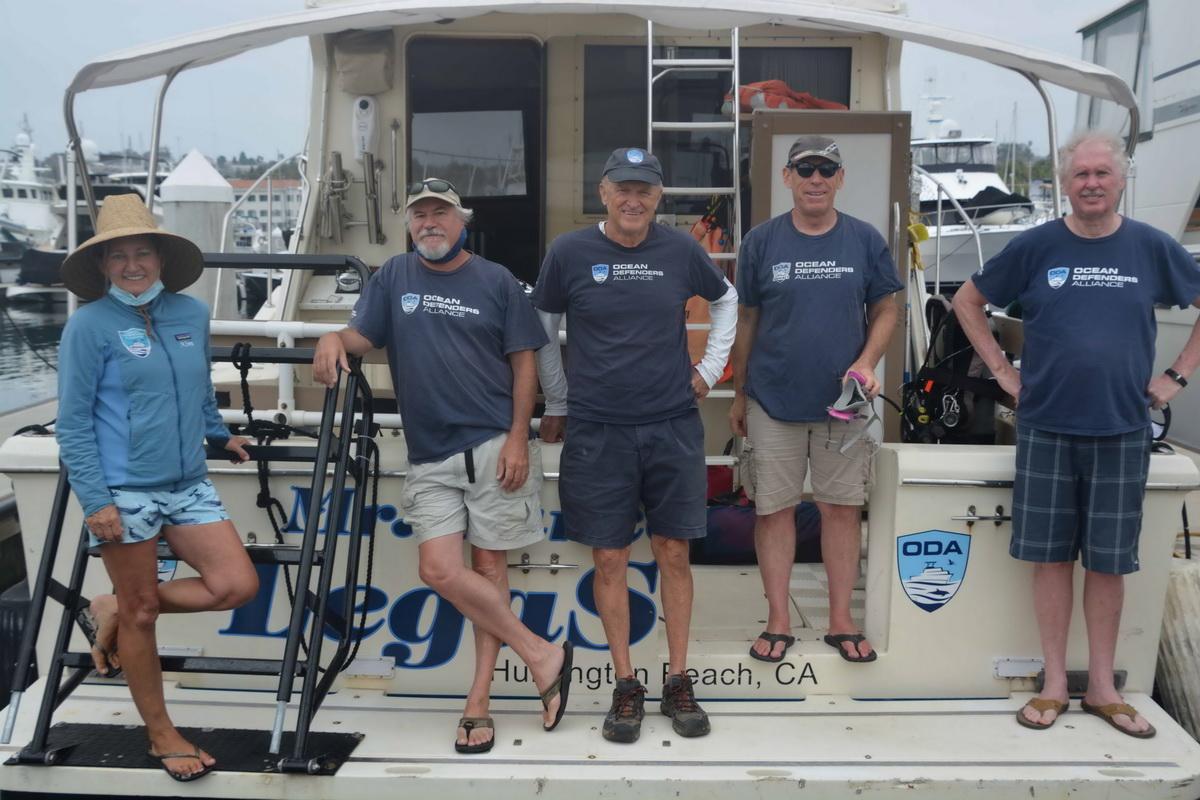 Within about 30 minutes, we arrived at the spot where we had stopped on our last dive.  ODA volunteer divers Kim Cardenas and Geoff Walsh were in the water a few minutes later.  Jeff Connor, Jim Lieber, Dave Merrill, and I were on the surface in our two boats:  Mr. Barkers LegaSea and Linda’s RIB (rigid inflatable boat).

When we were discussing the dive plan, we agreed that the divers would head east along the breakwall, with Dave and Jim following their trail of bubbles from a safe distance. 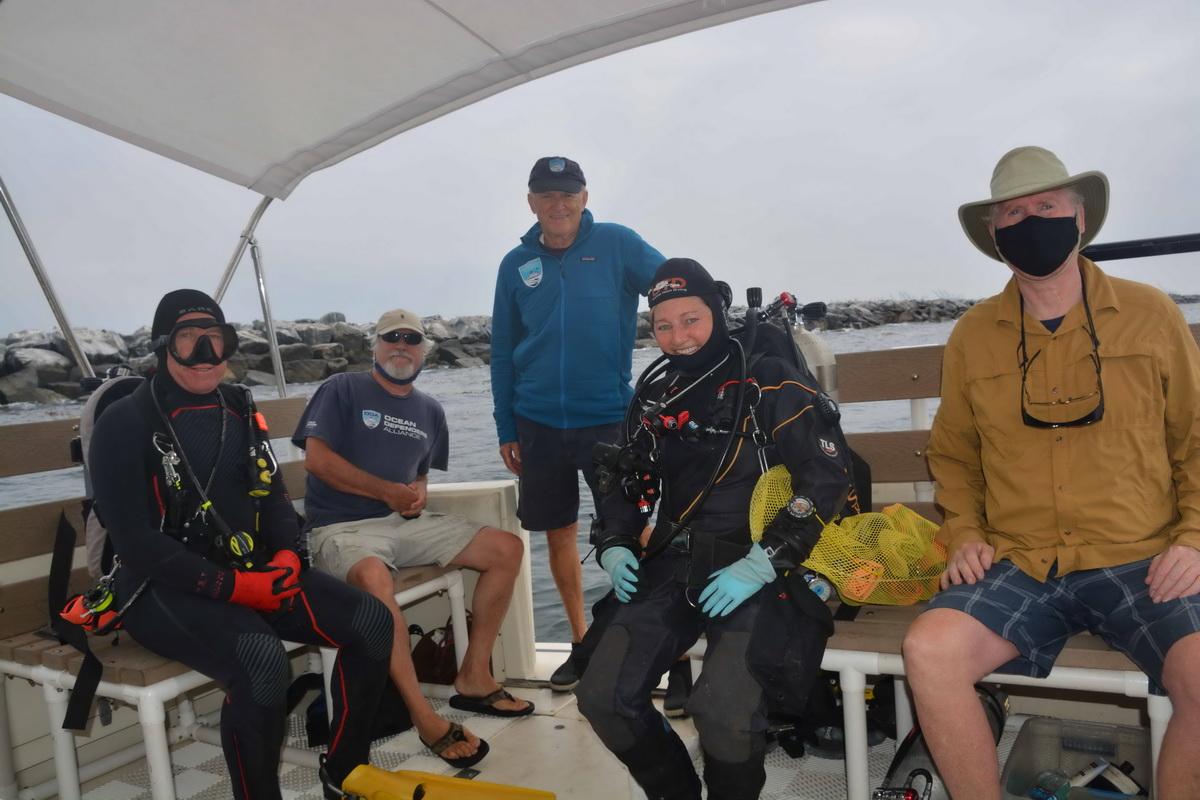 Within minutes of Kim and Geoff descending we saw a lift bag pop up to the surface right near the breakwall rocks.  As soon as we could tell that the divers had vacated the area, Dave and Jim headed over to retrieve the bag before it became entangled in all the kelp that thrives along this wall. 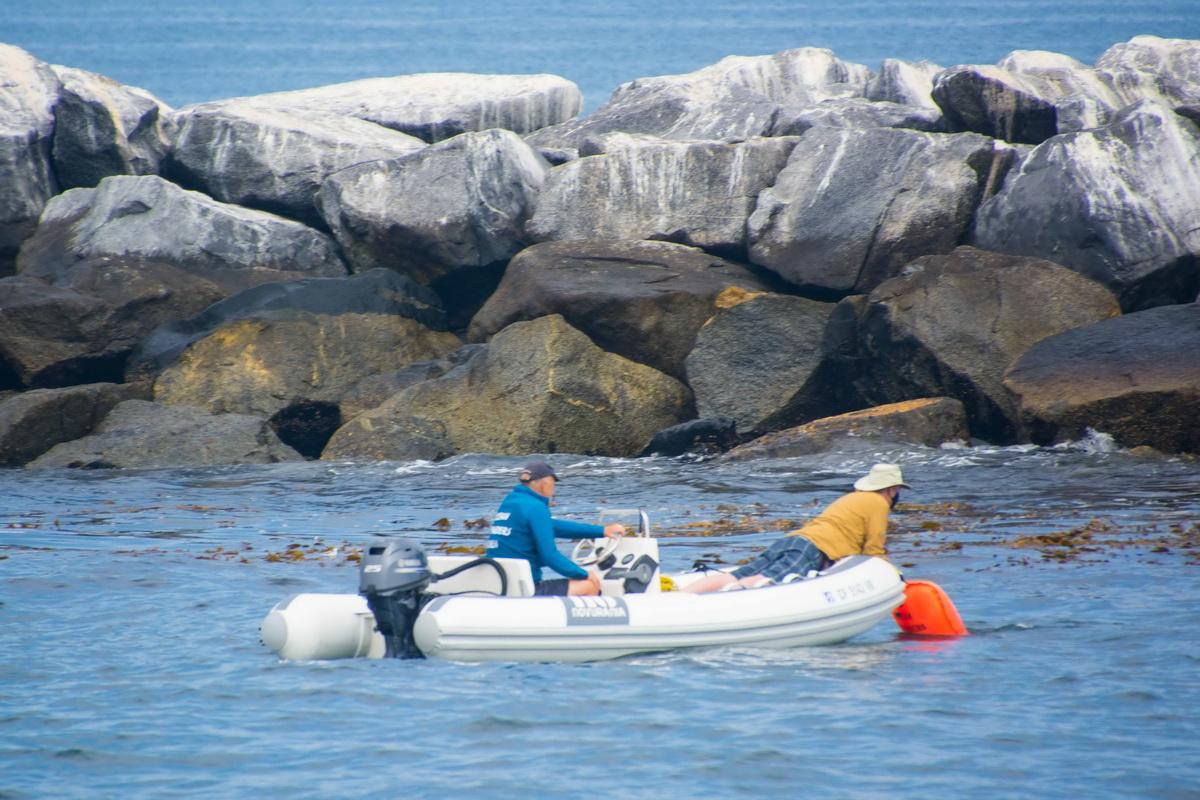 They then towed to bag and its contents over to Jeff and me on the LegaSea.

We quickly had an abandoned lobster trap hooked up to our davit and we hauled it aboard. 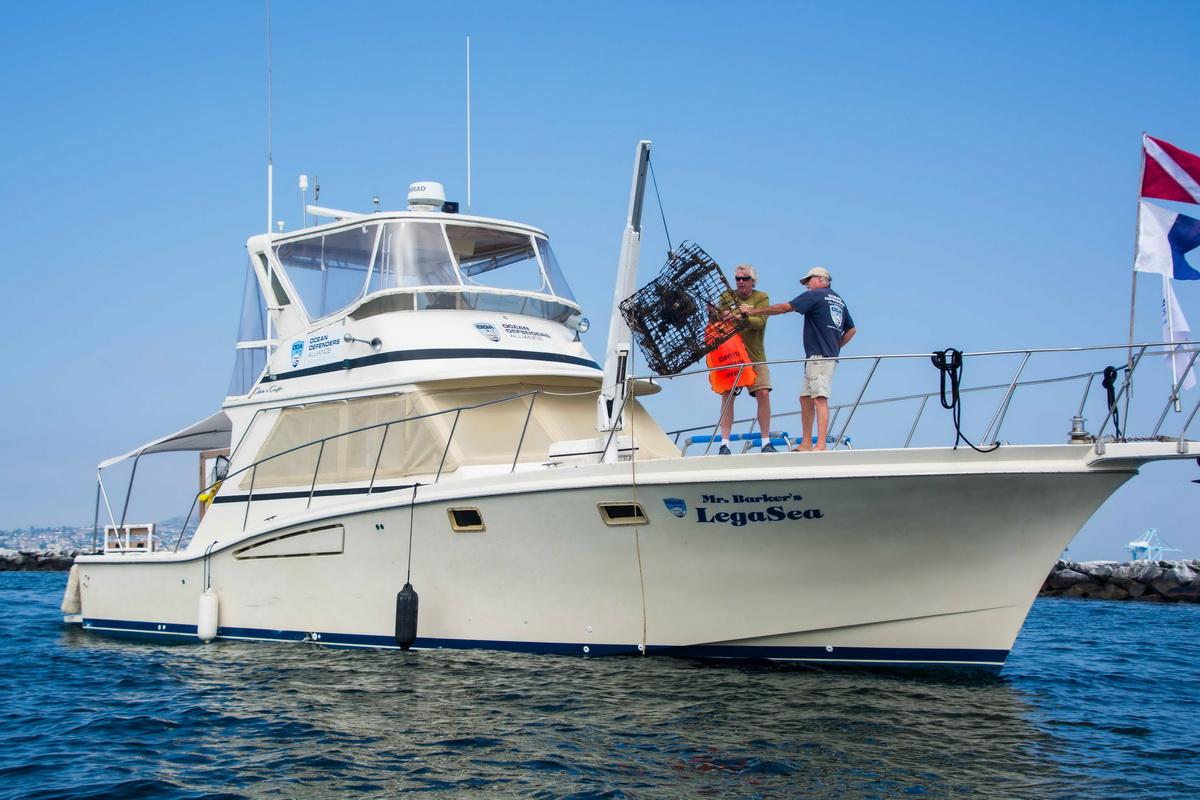 As soon as we had it safely secured on the front deck, we resumed trailing the divers’ bubble trail.  But something was amiss.  Kim and Geoff were not swimming along the wall like we had thought, they were heading out to sea…  What the heck?

We followed their trail in both boats and after about 50 minutes they finally surfaced.  When they climbed up the dive ladder, we found out what happened. 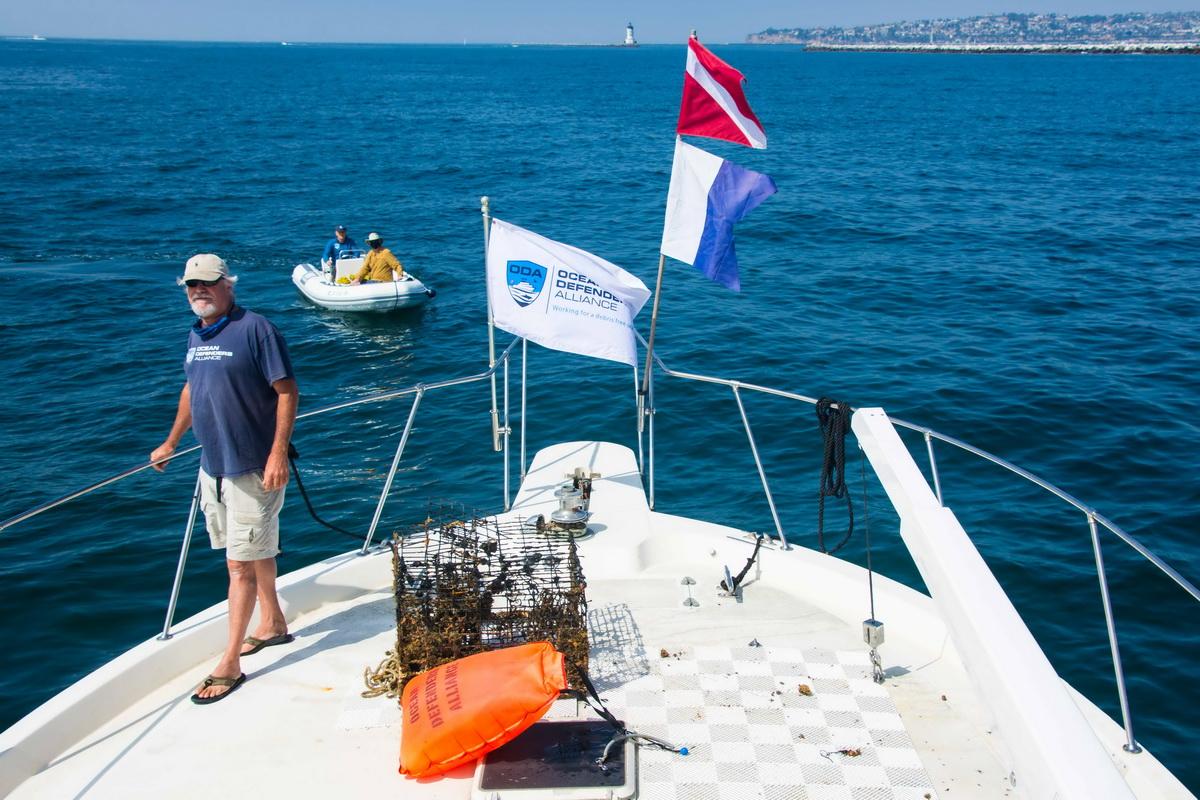 The visibility (vis) was even worse than the last three times out.  Kim said that when she extended her arm out, she couldn’t see her fingers.  Yikes, that means there was about three feet of vis.

They also said that because they couldn’t see very far, they didn’t even use their scooters for fear of running into something.  Geoff said that it required all of his attention for the entire dive just to keep Kim in sight.  Dang…

Well, at least we bagged another trap, and everyone got back to the boat safely.  We called it a day and headed back to port.

On our way back we spotted a very unusual sight, hundreds, if not a thousand, birds on the breakwall.  They were marine birds, called terns.

We stopped for a while to take in the wonderful sights and sounds, snapped a few pictures and went on our way. You can click the image to enlarge it, and be sure to look at the photo gallery below for more of these breathtaking photos! 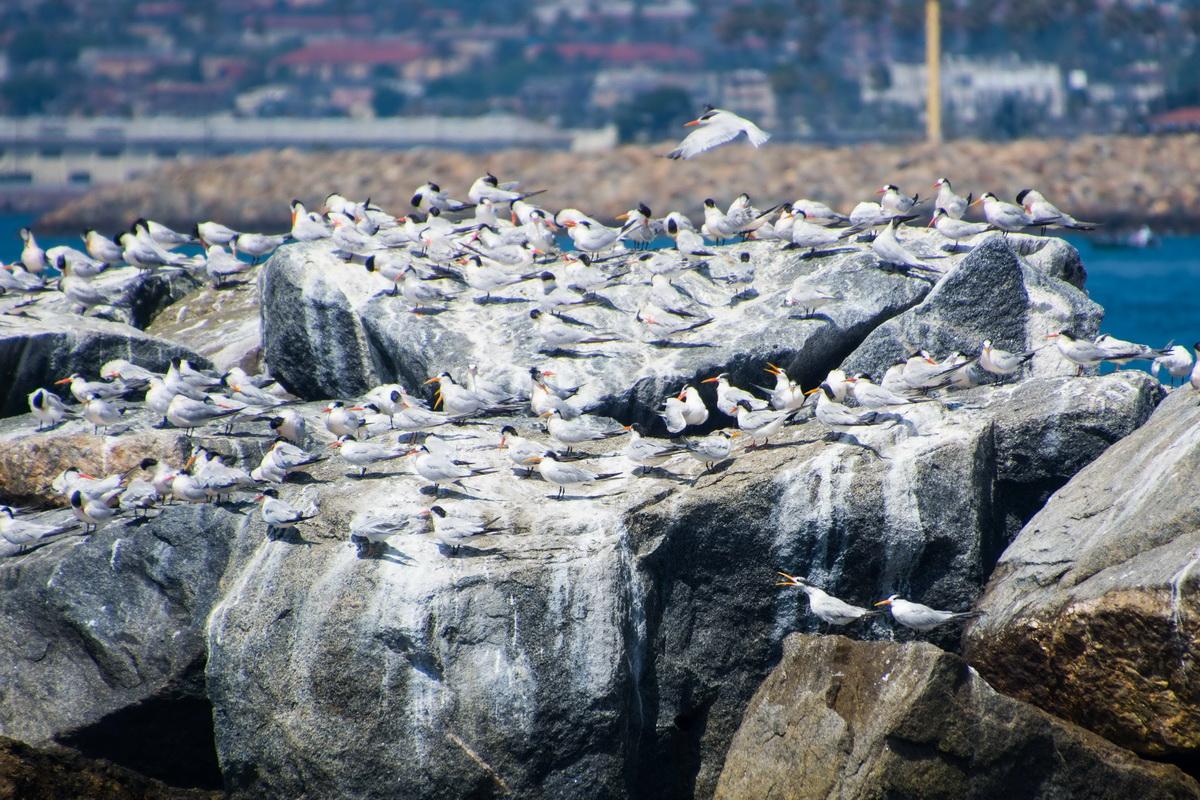 Nice way to cap off an otherwise lovely day out on the great Pacific Ocean!

If you’d like to see beautiful marine life while working to defend the oceans, please let us know. Once the virus restriction are lifted, we’ll need your help!