ODA had a booth at the annual Long Beach Scuba Show, which is the largest gathering of scuba enthusiasts in California. We have been attendees for the last 8 years, only missing once during that stretch. Though we always have lots of people visit our booth, this year was exceptional.

This year Scott Cassel, commercial diver and explorer-film maker, was a featured speaker at several of the symposiums that are held in conference rooms just outside the main hall. Scott had a large booth given to him as a reward for his participation.

Scott and I have been friends for several years now, and when we were having lunch recently, I told him about how most people that attend the show don’t even know about the nonprofit booths, since they are not in the main entry way to the exhibits, and as a result, the majority of attendees don’t even stop by the booths.

The organizers of the event put all the nonprofit organizations just outside the main convention hall. That is because we pay a reduced rate and they give preferential treatment to the companies that pay a regular entry fee.

Scott immediately suggested that ODA share the booth with him. What a GREAT offer!  One I couldn’t refuse.

ODA Volunteers Billy Arcila and Dawn Navarro helped out at the booth and we handed out dozens of her posters to those folks that signed up for our e-mail list.  She also donated proceeds from the sale of her field guides to ODA.  Thank you, Dawn!

We had more people sign up for our e-mail list than ever before. We are honored to be able to communicate with new friends, and hope you get a chance to read up on us, visit our donation page, and make a contribution.  Your donations go a long way toward helping us remove the deadly ghost gear that haunts the bottom of our coastal waters.

Make sure to take a look at our most recent video to see how many traps and lines we removed during a one hour dive, just a couple hundred feet from the LA Harbor breakwall.

It was great meeting all you new folks and seeing old friends.  The enthusiasm generated there makes me wish there was a Scuba Show every month. 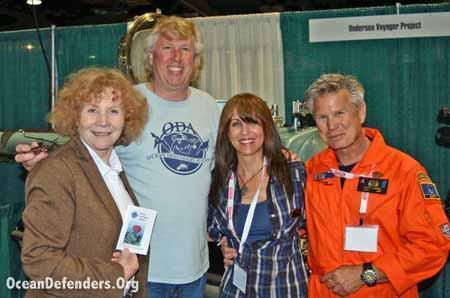