How We Are Ridding Anacapa Island of Man-made Debris 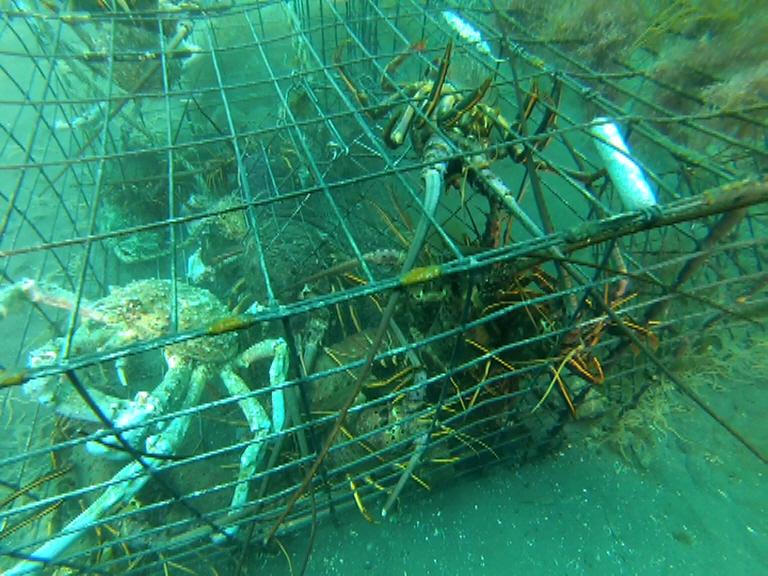 After our hugely successful day of releasing 44 lobsters and sheep crabs from several abandoned traps on April 12th, we finally were able to return to the site at  Anacapa Island, to locate and remove several traps that we had to leave behind.  Make sure you take a look at the pictures of all those animals that were imprisoned in the traps! They were all released and swam to freedom. [See more in photo gallery below].

We headed out on Sunday, May 4th.  The week before we had had strong Santa Ana winds blowing, so I was hopeful that by now the seas would be relatively flat.  That turned out NOT to be the case, and we faced 5-6 foot waves as we motored over to West Anacapa Island.  It made for an uncomfortable ride but the dolphins didn't seem to mind.  We were escorted part of the way by several large pods, with some individuals leaping entirely out of the water as they rode the pressure wave in front of our boat Clearwater.  Spectacular! 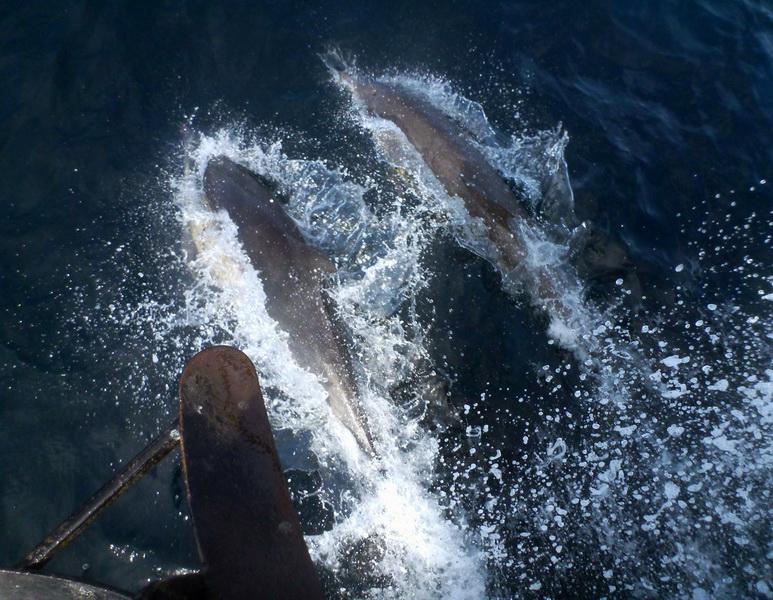 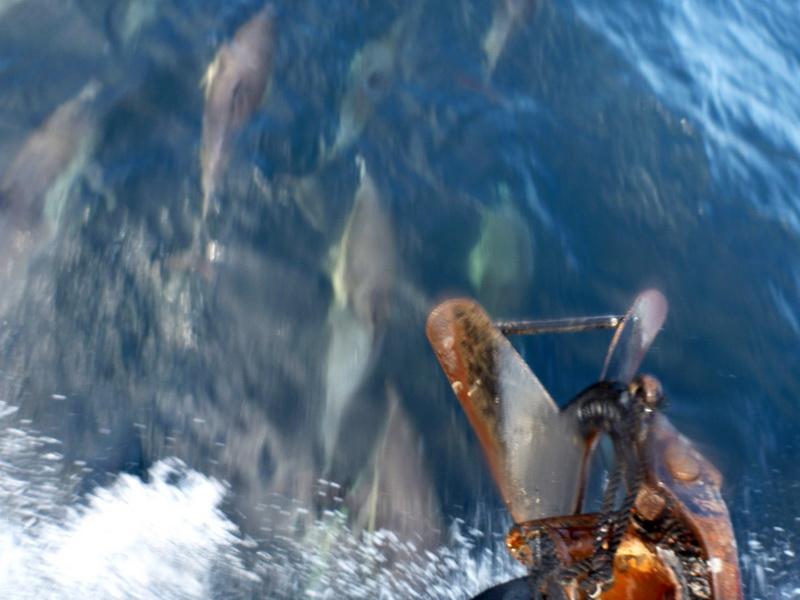 As we approached the site, because safety is paramount, I was concerned that the waves would be too big for our divers to safely get in and out of the water.  But thankfully, the area was nice and calm, with no current. 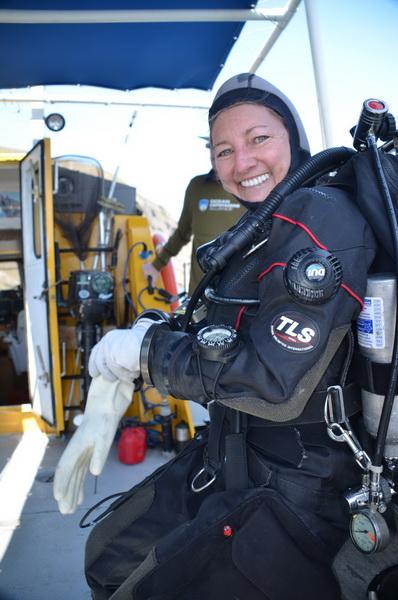 As soon as we dropped anchor, volunteers Jeff Larson and Kim Cardenas donned their dive suits, entered the water, and we handed them their DPV's (underwater scooters).  Jeff and Kim had both been with us to this site before and knew where several traps were located.

They quickly found two traps about 100 yards from the boat, in 90 feet of water, and attached lift bags to them, which when inflated will float the debris to the surface.  Jim Lieber and Tim Pearson hopped into the Zodiac, sped over to the bags, attached a tow line to them, and then slowly towed the traps to the Clearwater.  Lisa Davis, Julia Ransom (photographer), and I then began the process of hauling the traps aboard with our davit.

ODA Knows How to Locate and Remove Debris

As we were securing the traps onto the deck, we saw another lift bag break the surface.  Jim and Tim happily towed another trap back to the Clearwater.  None of these traps had any animals in them because our divers had released them on previous dives. 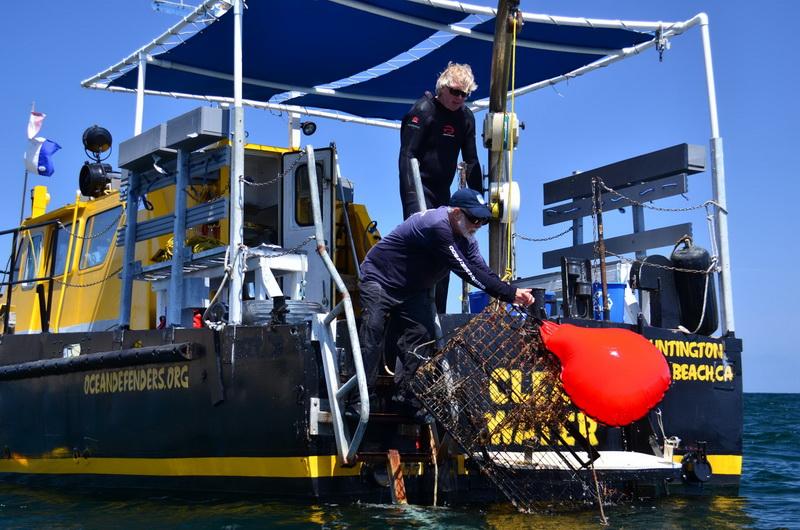 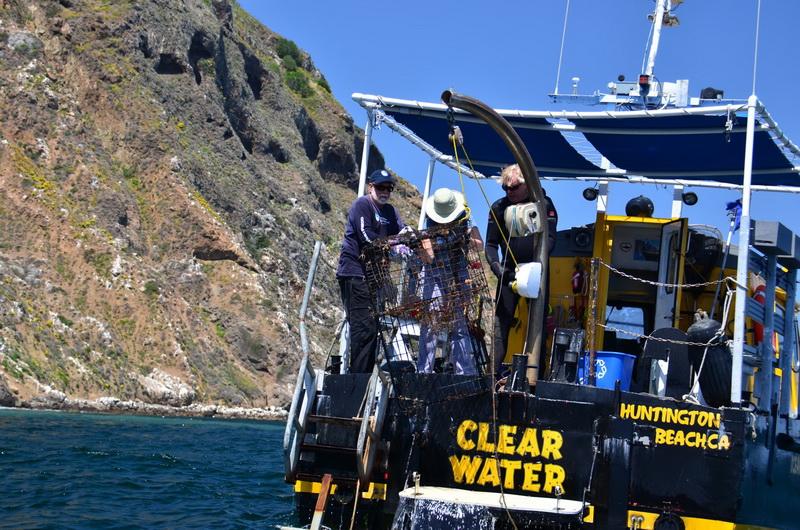 We feel it is important to remove the traps anyway because they still have polypropylene lines attached to them, which can entangle a whale, dolphin, or sea lion.  Plus the traps will damage or kill the creatures living on the sea floor that can't get out of the way when a storm comes in and tosses the traps around like battering rams. [See in the above picture on the left, the red float bag] 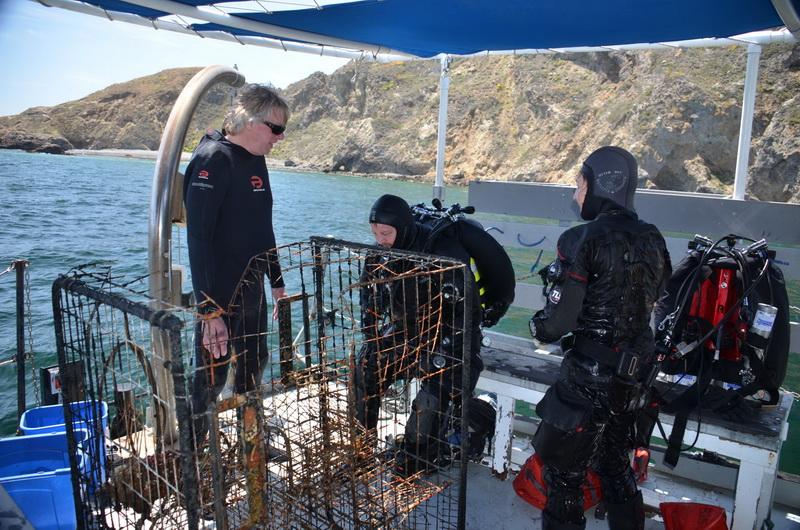 On this day, we removed three traps and 150 feet of polypropylene line!  Thank you Jeff and Kim for spending an hour and a half underwater, looking for and removing the traps.  Thanks as well to the support crew of Jim, Lisa, Tim and Julia.  Even though the ride out and back wasn't much fun, it was rewarding knowing that we got those traps and lines out of the water!

On our three trips to Frenchy's Cove, we: 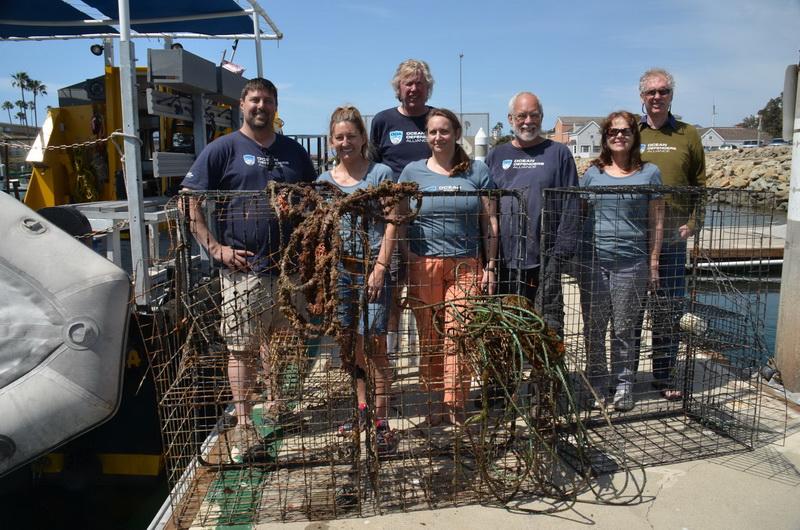 ODA Dive & Boat Crew at the dock with recovered lobster traps. Left to right: Jeff Larson, Kim Cardenas, Kurt Lieber, Julia Ransom, Tim Pearson, Lisa Davis and Jim Lieber.I want to thank all of you who heard our call for donations this past month.  We are trying to purchase a new boat, and many of you made significant donations to help us achieve that goal.  During this trip several things broke on the Clearwater and the Zodiac.  I will try to get everything fixed quickly, but we cannot go out again until that happens.

These needed repairs reinforce the point: we need a new boat.  The Clearwater is just breaking down constantly, and I know none of you want to see ODA's activities come to a halt while we wait for the Clearwater to be repaired, once again…and again…and again.

Thanks to all of you who donated, and to our generous donor for matching all the donations made during the month of April. We'll soon be out of the repair business and back into the business of action on the water!

Check out our chronological documenting of the day's expedition! Remember, all those animals were set FREE!