ODA continues to dive in and cleanup the underwater world of Hawaii.

On Saturday, August 24th, we were fortunate to have over 40 volunteers on the Big Island to continue our efforts to remove marine debris from Honokohau Harbor. This is the main boat harbor, just outside of Kona. 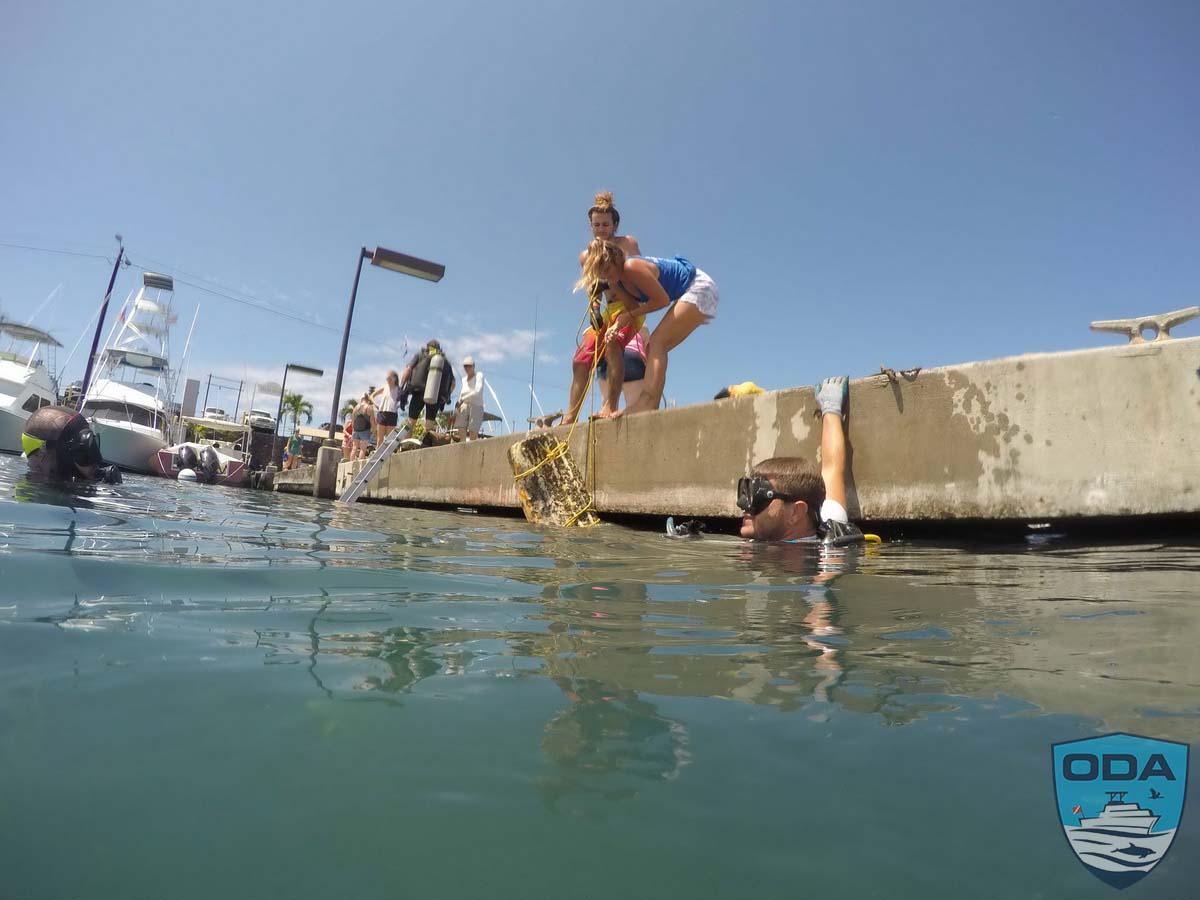 It has been hotter than normal ever since I arrived here earlier in the week.  Then the night before our scheduled dive I read in the newspaper that it was going to be so hot around Kona that they recommended minimizing outdoor activities during the day…

Well that certainly didn’t make me feel good about our chances to have a fun and productive day.

I had been coordinating with the office of the Honokohau Harbor Patrol for the last several months getting all the permits and other documentation that is required to let people dive in the harbor.  Many thanks to Suzanne Ow and Steve Schmetz for working with me during the entire process!

Our gratitude goes out as well to Allison Keith for talking with her bosses at Superior Sanitation to get the disposal bins donated for the day.  They pulled through once again!

Of course, none of this could happen here in Kona without the collaborative efforts of Teri and Jeff Leicher and their staff at Jacks Diving Locker(JDL).  We’ve been working together now for almost two years, and we are getting better at this each and every time.  One of the gals who works there, Sarah, is a hardcore diver and loves what ODA is all about.  When I sent her our press release, she immediately got on the phone and called a reporter from the West Hawaii Today newspaper.  Without hesitating, they said they would send a reporter out.  They did this, and on Sunday morning ODA and our fantastic volunteers were on the front page of the newspaper.

Matt Bogdanovitch works at JDL as well.  He is one of their boat captains and wears so many hats there, he could open up a haberdashery.  He has been at every one of our cleanups in Kona. 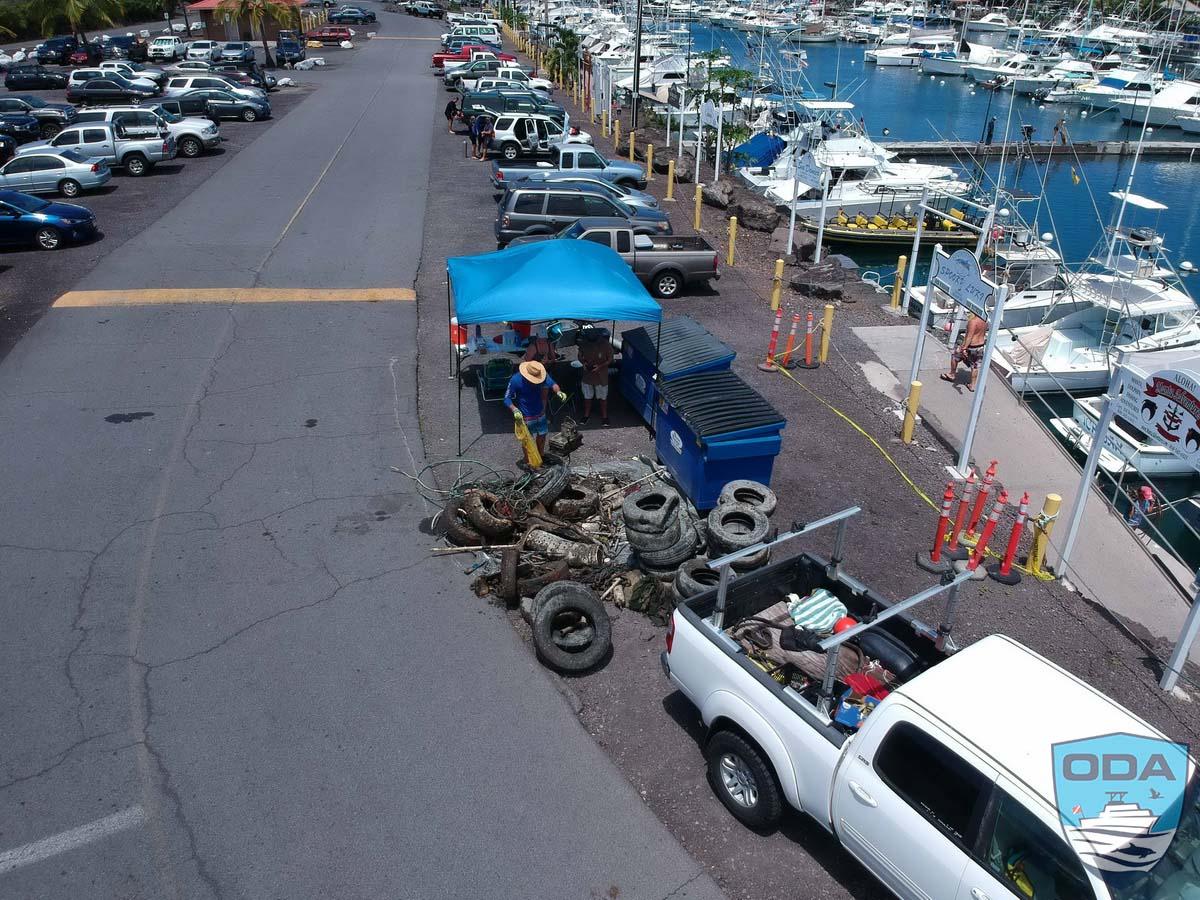 Matt and I met up at 8am the day of the cleanup and started setting up the tent, chairs, and all the gear that we would need for the volunteers.

Then around 9 folks started showing up.  We called the JDL office -- where people were checking in and signing the waivers before they headed over to the dive site -- to see if everyone had completed the check in process, and they said no, there were still more people filling out their forms.  Keep in mind that the day before, we had 35 people whohad signed up to volunteer.  Now we had about 40 people at the dive site, with more on the way.

Because it was starting to get hot, I gave the briefing to the ones already there, and they started getting in to their dive gear, while the support crew started grabbing the tools they would need to haul the debris out of the water once the divers had found something. 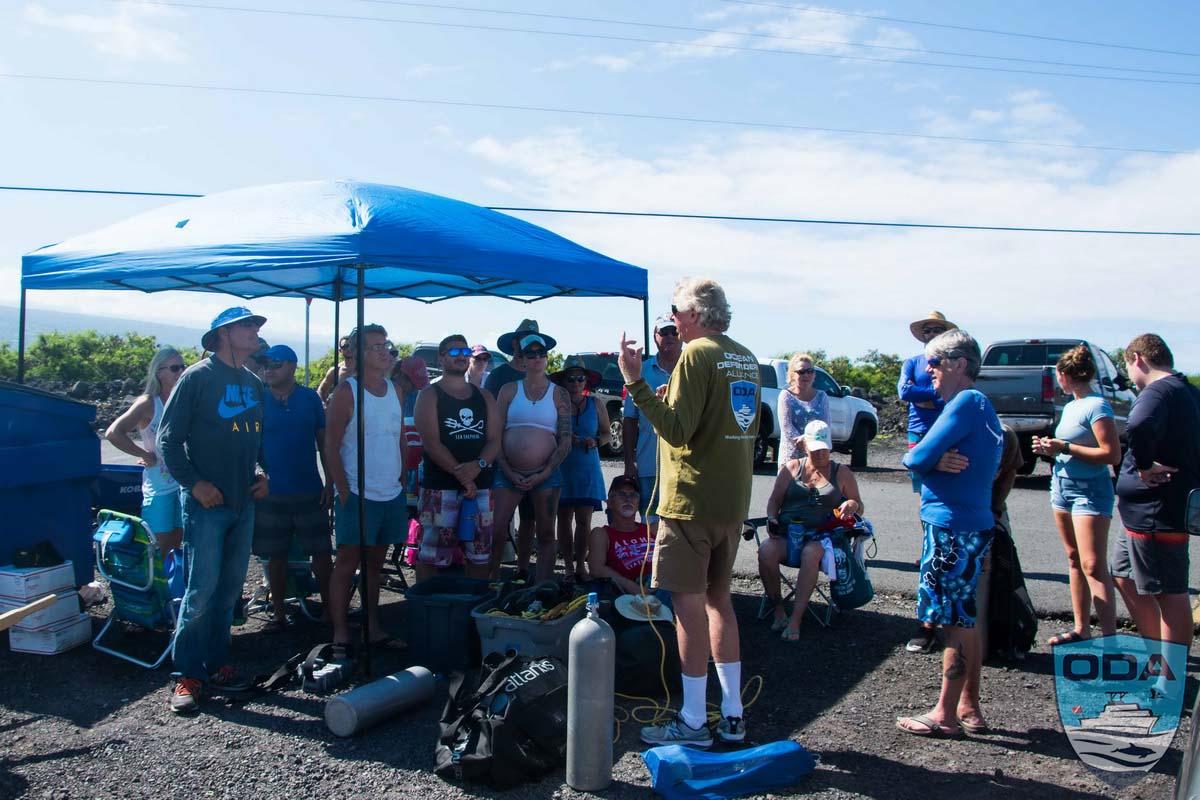 As more people were showing up I gave them a repeat of my briefing.

By 10 o’clock we had about 20 divers in the water and another 24 or so scattered all over the boat docks.  Within mere minutes the tires started coming up.  Then some carpet, lots of hoses and PVC tubing, some radios, a few carburetors, an alternator, a motorcycle battery, and a HUGE battery.  This one was what is referred to as an 8D battery, they are at least four times the size of a car battery and weigh about 125 pounds. 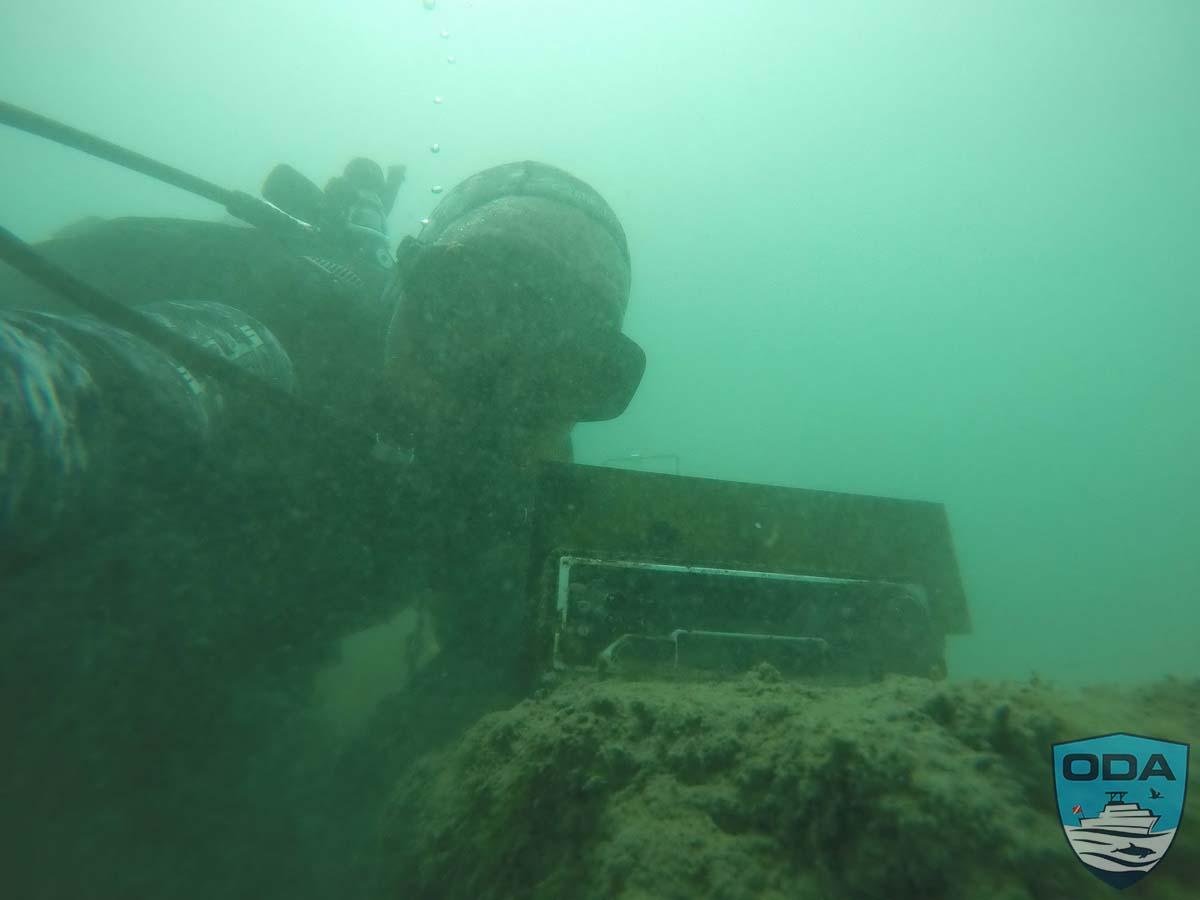 For the next 90 minutes things kept coming up, getting loaded into our wheel barrows, and hauled up the slip ramps to our staging area.  By 11:30 the heat was overwhelming, and we decided to call it a day.  But of course, that wasn’t the end of it, we had to clear all the walkways of all the mud we had removed from the tires.  Each tire weighs about 50 pounds, but with all the mud in them they can weigh up to 100 pounds.

Once all that was done, we got most everyone to pose for the “Catch o the Day” picture.  We all marveled at how much stuff we had removed. 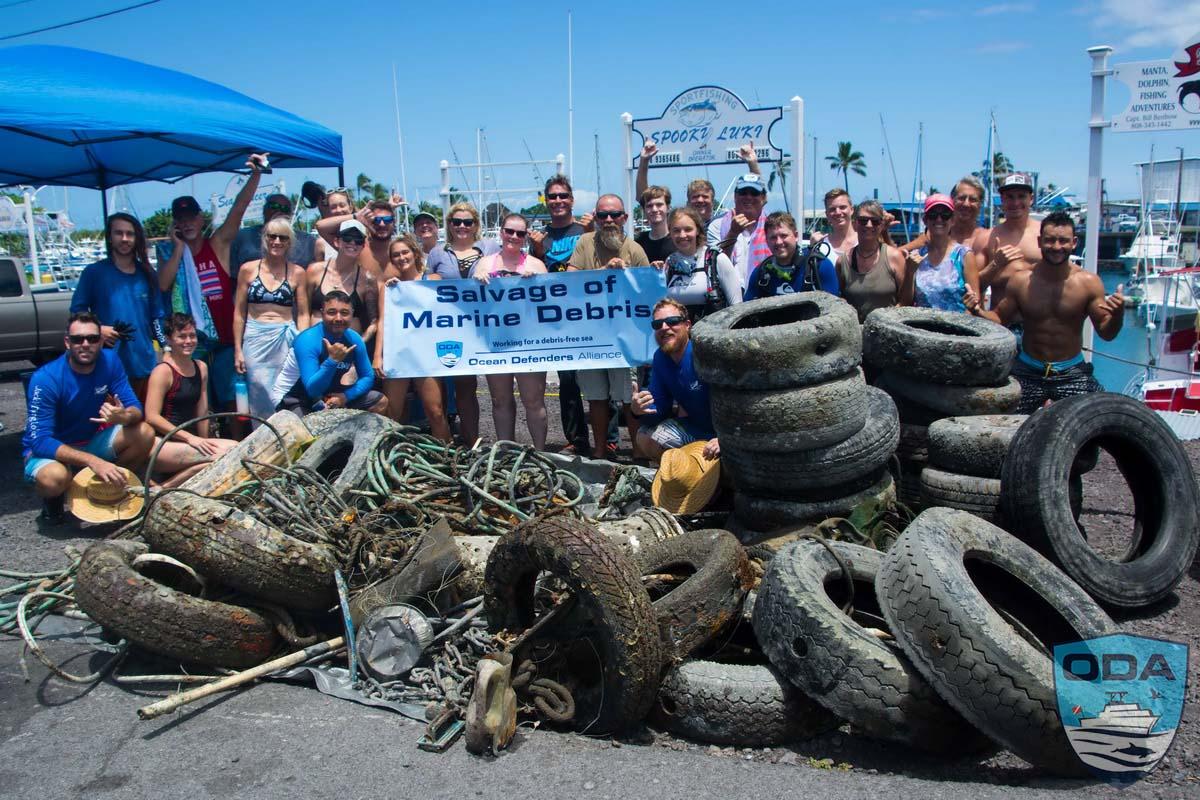 Depending on how you do the calculation, do you count how much each tire weighed as we pulled it out, or do you only count the weight after the mud has been removed?  I’m going to go conservative (50 lbs) and not include the mud, even though you’ll get an argument from anyone who has had to pull a mud laden tire out (100 lbs). ;-)

Thanks to everyone who gave up their hard-earned Saturday to pitch in and help the oceans.  We even had one guy help out who had just sailed solo from San Diego to Hawaii in his own 27-foot boat.  He was extremely grateful that all these people cared enough to do this on their “day off.”   He was there helping us haul the debris, from the beginning to the absolute end.

While walking the docks, I got to see lots of fish that are in the harbor: Moorish Idols, pufferfish, 2 green sea turtles, yellow tangs, and several schools of sergeant major fish.  Someone pulled up a beautiful cowrie, which we all marveled at, and then put the critter back in its home.  We all felt these beings were smiling as much as we were.  They have a home that is now much less toxic and safer for them to navigate.

Can’t wait to do it again, in fact we WILL be doing it next weekend, Saturday, August 31st.  This time on the north part of the Big Island, at a place called Kawaihae Harbor.  If you want to help out, check out our calendar for more details.

Hey, and don’t forget about California! Our ODA So Cal crew is going out on Monday, September 2nd, to remove more fishing nets from the sunken vessel African Queen.

Hope to SEA YA THERE!