Mystery of the Lobster Graveyard

As the rest of the world seems to be going either up in flames or inundated by rains, the weather here in southern California has been great…so far.

A great group of ODA volunteers got together early on Sunday, July 25th.  Our plan was to head back the Channel Islands Harbor breakwall where we had released several dozen lobsters from some abandoned traps just a few weeks ago on July 11th. 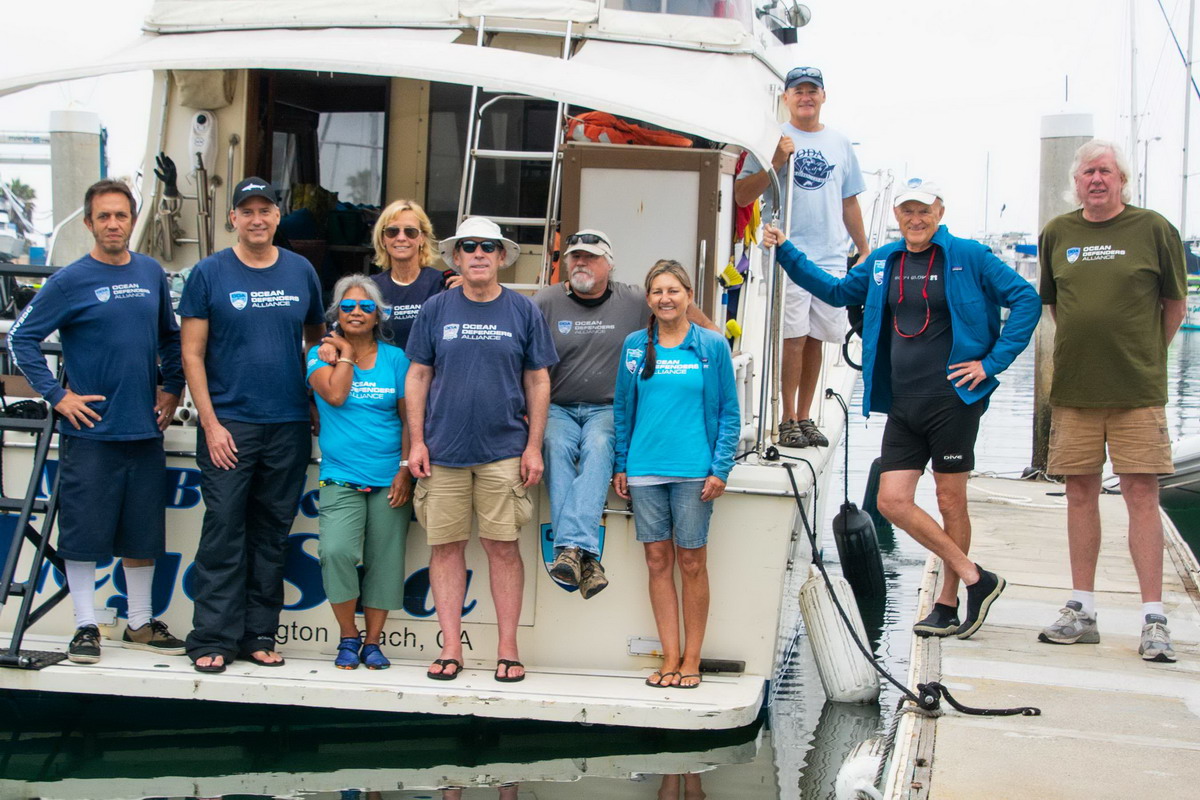 That last time out we had only searched a small portion of the wall when we got caught up in liberating all those lobsters.  Since we had found three abandoned traps there, we felt there would most likely be more.

We got to the site around 9:30 and boarded ODA’s flagship Mr. Barker’s LegaSea. We were pleasantly surprised to have glassy seas.  Calm waters would really be a welcome help to the divers because last time it was pretty rough, and they had a hard time with the resulting surge pushing them back and forth.

Because the conditions were so good, we dropped the anchor, and the divers were soon in the water. 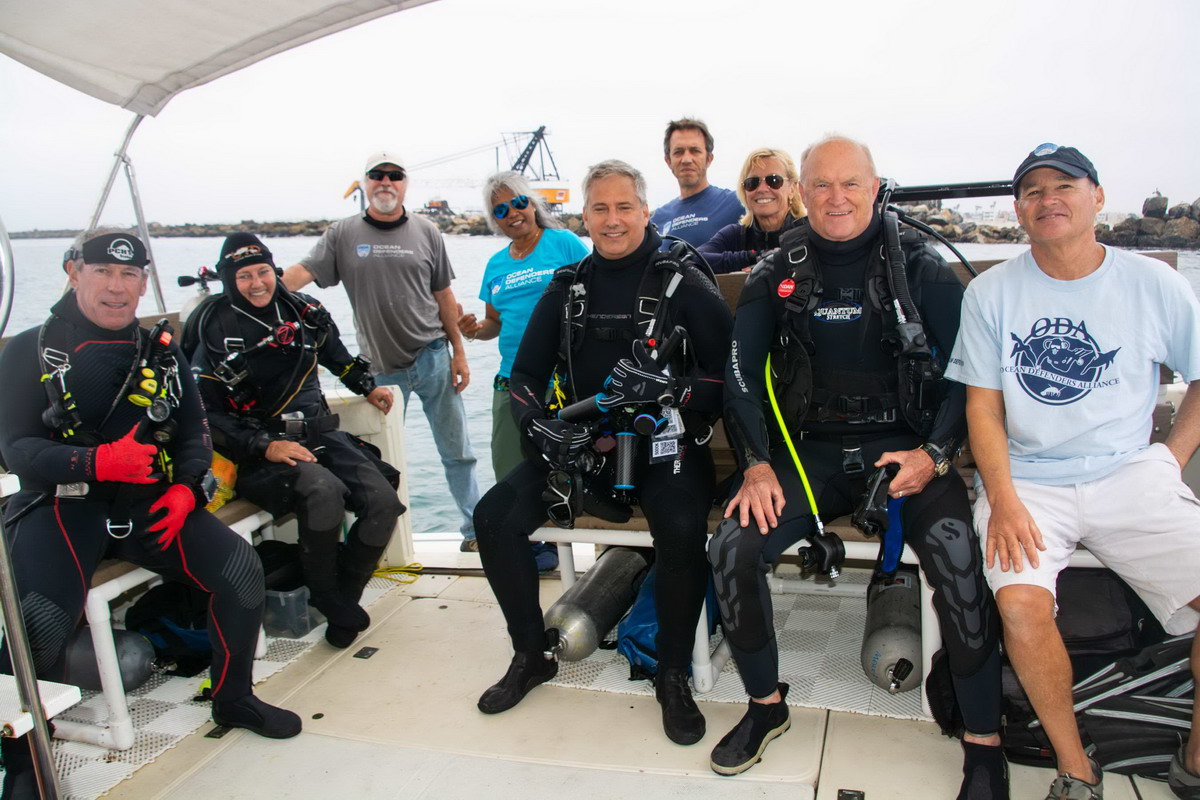 The dive team this day consisted of volunteers Kim Cardenas, Todd Kortte, Dave Merrill, and Geoff Walsh.  This was Todd’s 1st time out with us since 2018.  He’s an awesome UW (underwater) videographer, and we were thrilled to have him along to document whatever we were going to come across. 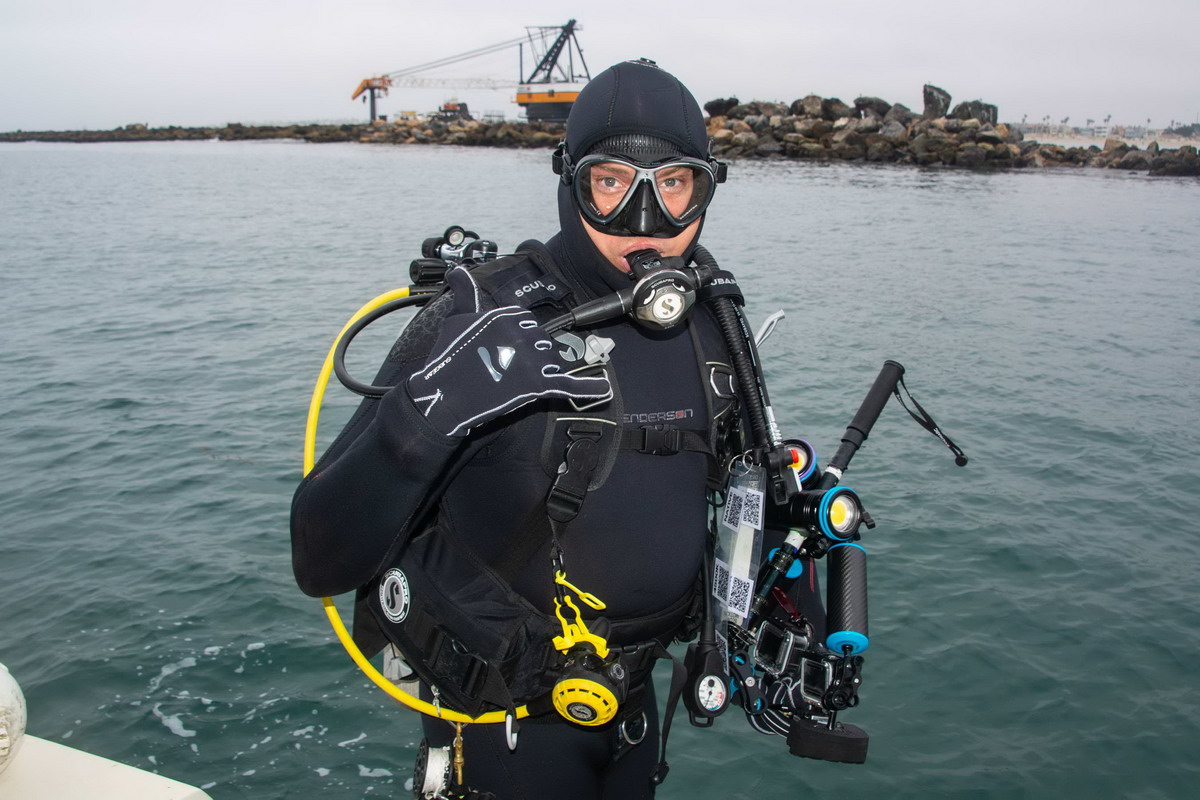 On deck were, Merlita Balaoing, Andre Casanave, Jeff Connor, Rex Levi, and Sue St. Sure.  It really was a treat to have so many seasoned ODA people to handle all the dive and boating activities.  Experienced crew sure makes things go smoothly when doing our specialized debris-removal diving.  There are a lot of challenges we get confronted with just on normal outings, but “normal” doesn’t seem to be what we get usually.

What we thought was going to be a routine set of dives turned south, quickly…

We had a total of four divers in the water, and they split into buddy teams:  Kim and Dave,  Geoff and Todd.  The plan was for all four of them to head in one direction along the wall, only stopping when they found something that needed to be sent to the surface with a lift bag.

Jeff, Sue, and Merlita were in the RIB (rigid inflatable boat), following the divers’ bubbles at a safe distance, to be there if any emergency might arise.  But also, they need to be there to protect the divers from any boats that might come close to the divers. 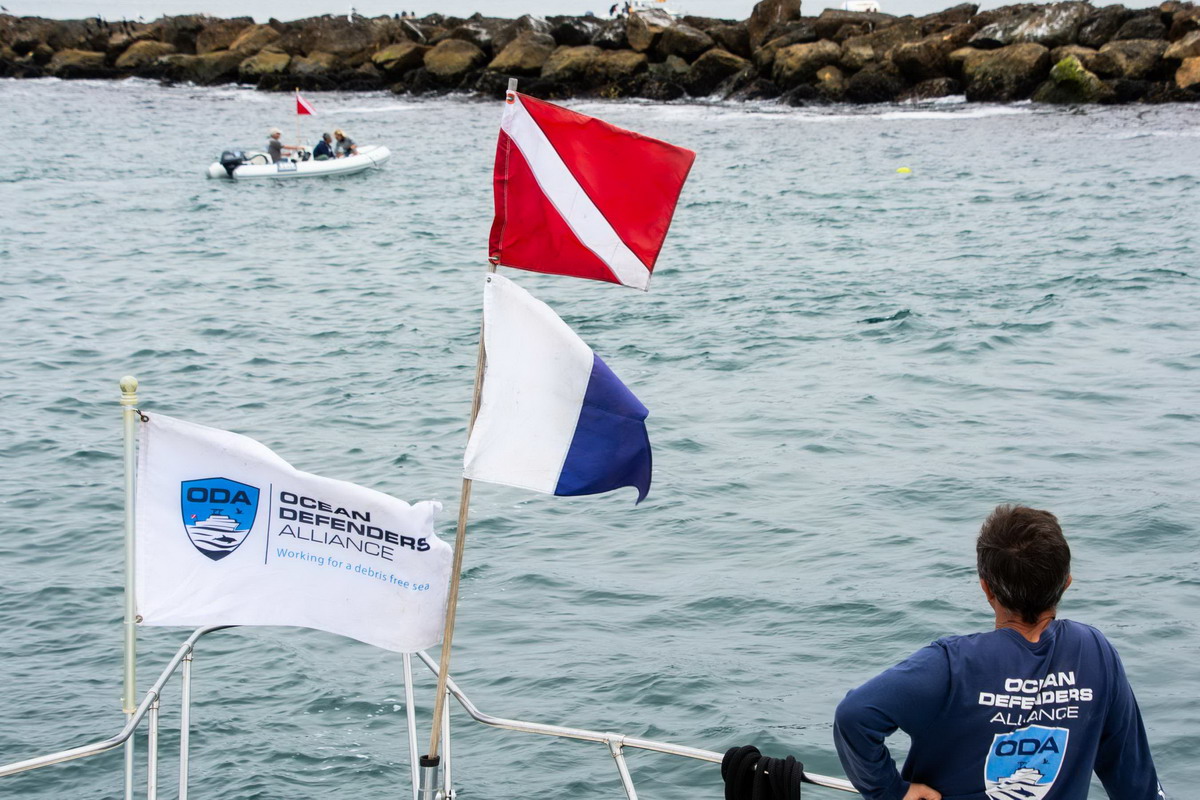 Not So Great Underwater

Within five minutes of the entire dive team dropping, they got separated.  The vis (visibility) was so bad that they just could not see each other.  Geoff and Todd went south, and Kim and Dave went north.  The RIB team went north as well.

After about 15 minutes, we saw a couple of lift bags pop to the surface.  I hailed the RIB team on the radio, and they motored over to the lift bags. 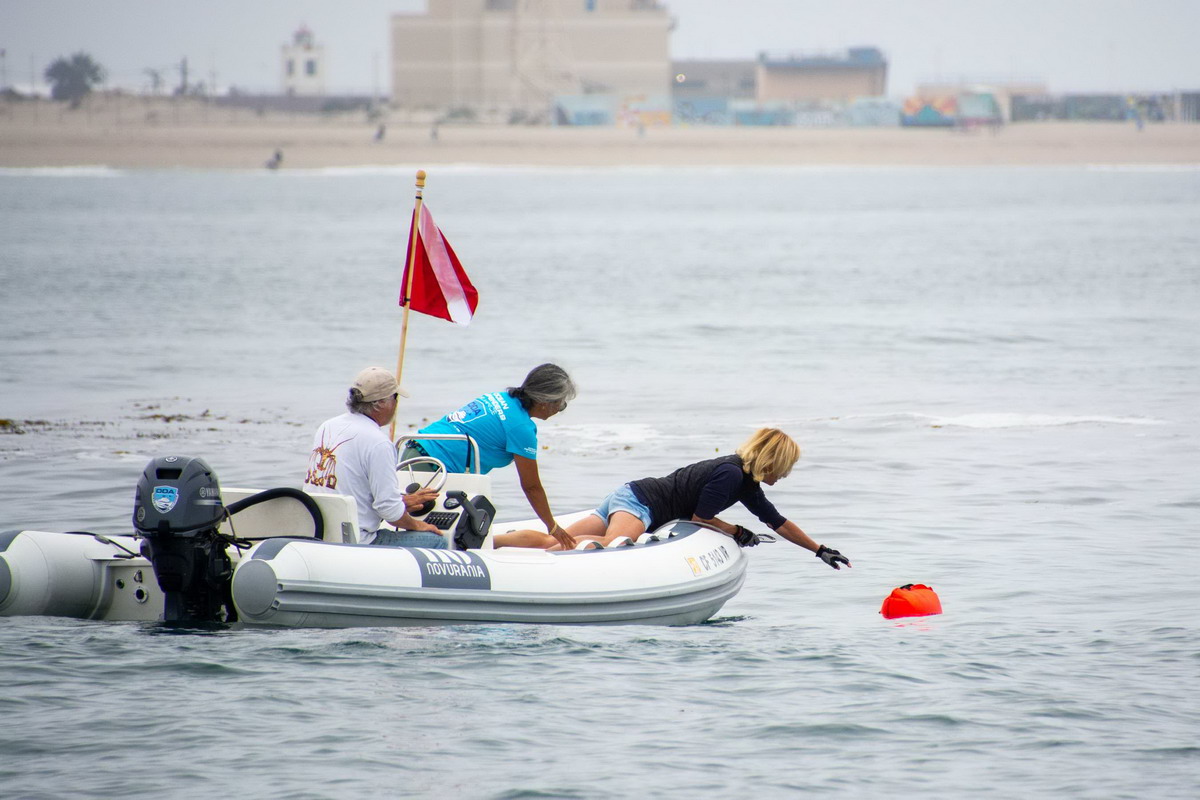 They dragged the lift bags back to Rex and Andre who pulled the stuff onto the stern of the LegaSea.

The RIB team then headed back north to keep an eye out for the other dive team.  Kim and Dave soon surfaced and headed back to the boat.  Five minutes later Geoff and Todd did the same.

With everyone back aboard, we started to discuss what they had seen.  The vis was horrible at five to seven feet; it was all they could do to stay with their buddy, and not run into anything.  While they did report seeing several abandoned lobster traps, they were all too deeply buried with sand to be able to remove them.

Kim also said she was seeing a lot of dead lobsters on the sandy bottom.  Lobsters are hearty animals, they are fast when they need to be, and their shells act like armor.  So, to hear of even one dead one is unusual.  But Kim was saying there were lots more than just one. 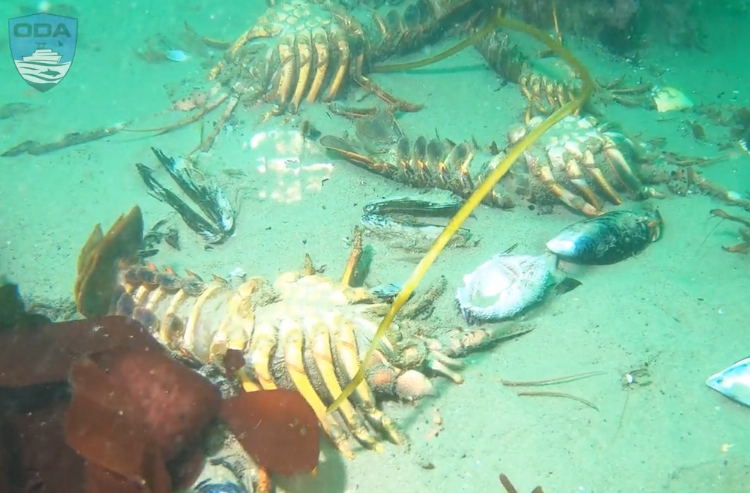 So, for the second dive we decided to start where Kim and Dave had ended their first dive.  This time we thought we should focus on seeing how many dead lobsters there were.  Luckily for us, Todd Kortte, had was with us!  Todd had brought along his UW video camera as well as good lights to illuminate the area. 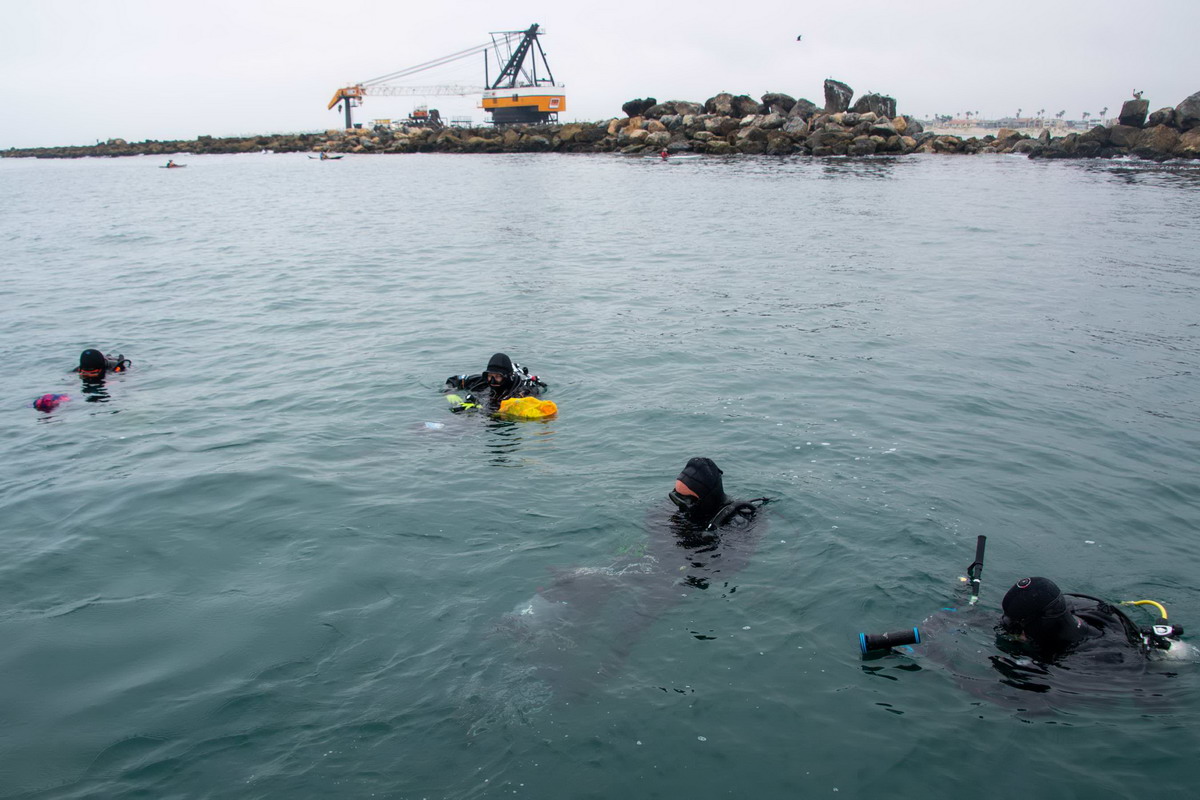 The divers were down for about 40 minutes, and we could see by their bubbles that they had stopped for several minutes at many spots along the wall.  This usually indicates to us on the surface that they had found something and were working to secure some lift bags to send to the surface.  But we never did see any bags.

Once the divers surfaced, we pulled the anchor and motored the boat near them to pick them up.

When everyone was back aboard, we heard the sad story:  They had seen roughly 100 dead lobsters, along with dead sheep crabs, rock crabs, and some fish.  Todd took his camera out of the housing and started to show us what he was able to film.

As you can see, it was a graveyard of marine life.  We had been here two weeks prior, and the place was alive.  Now it felt just dead.  The divers estimate that they saw 100 dead lobsters (not one alive) several fish as well as a dozen sheep crabs along with many rock crabs.  They also noted about 15 abandoned traps.  All too buried in the sand to be able to remove.

We headed back to the boat slip, did our usual boat cleanup and picture taking, and we all headed home scratching our heads.  What happened here?!?!

Here we are with three weight bars and approximately 200 feet of trap lines. 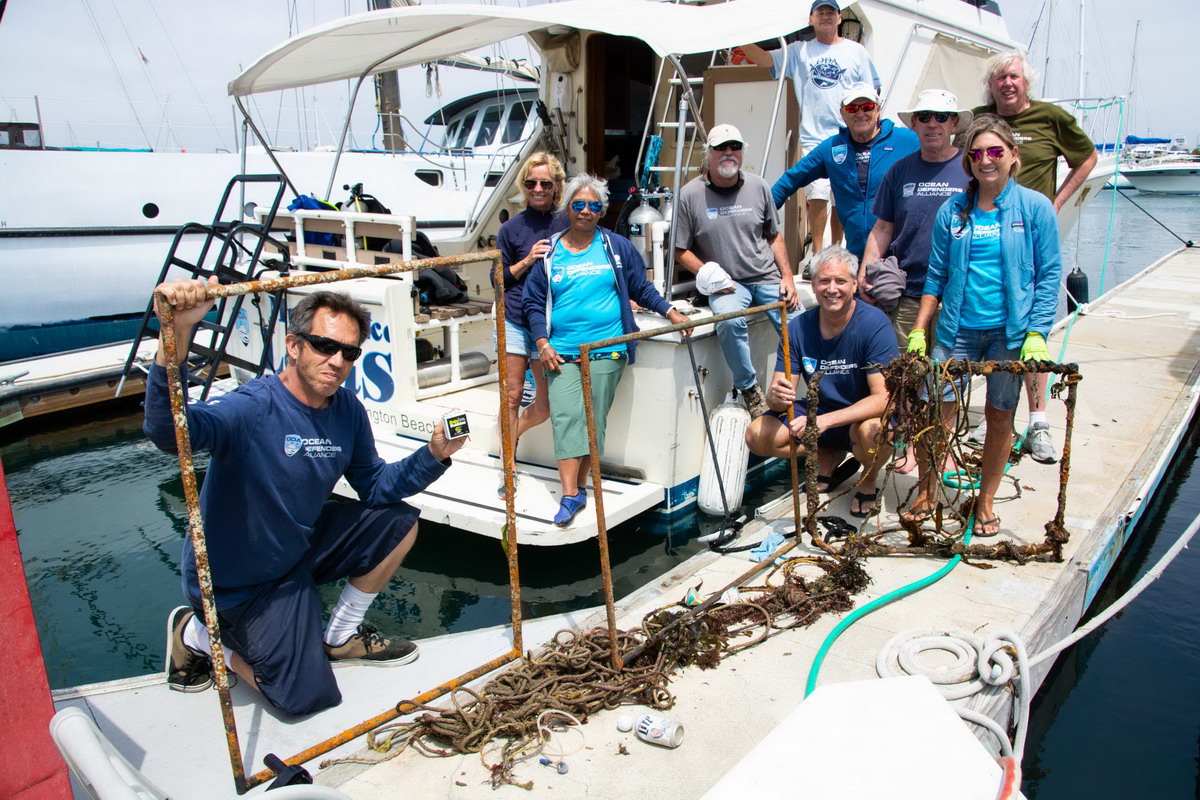 Crew with the Catch of the Day

About the weight bars: The traps have one of these weighted bars placed on the bottom of the trap.  This ensures that the trap lands topside up.  The topside is where the trap door is, which allows the lobsters to escape when the door hinges erode.  If it were upside down the lobster would be forever trapped.

Trying to get to the bottom of this

As soon as I got home, I jumped on the phone.  Soon I had talked with a lawyer friend of mine, and two people from the California Department of Fish and Wildlife (DF&W).  The officer was kind enough to pick up the phone on a Sunday, his day off, and discuss the predicament.

I told him what our divers had seen, but before he called his superiors he wondered if we had any video that he could look at.  I hung up and called Todd.

Todd said he could get me something to pass along within an hour or so.  And sure enough he did.  I viewed it with dread.  It looked like a lobster graveyard.  Nothing but bodies lying in the sand with some just rolling around lifelessly with the wave surges.

Then I passed the video on to the DF&W.  After several back-and-forth calls, they have all the information that we can give them.  They are going to send a team to dive the area and see if they can figure out what happened.

I’ll let you know if we find out any more about this tragedy.

For a more uplifting outing, please check out our report from the week before where we release dozens of LIVE lobsters!! This is our goal -- get to the abandoned fishing gear and release any live animals. And our ultimate goal is always to remove any and all debris that we can! Thanks for your support of this life-saving and habitat-improving work!