While the world seems to be baking under unprecedented heat, here in southern California we’ve miraculously been spared that fate.  In fact, we’ve had temps in the 60’s and cloudy skies.  But we know it won’t last for long…

So, a few of us got together on a very cloudy Sunday, July 24th. 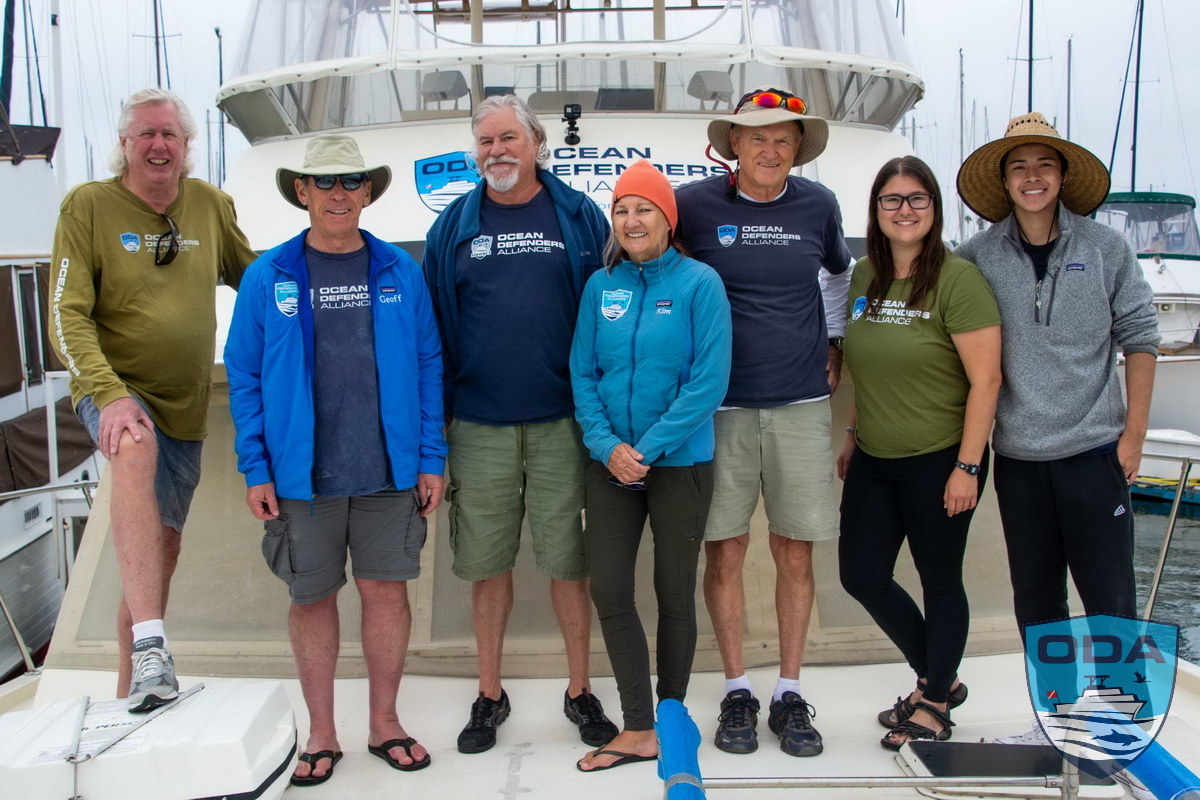 Because of the resurgence of Covid, we wanted to keep the crew to less than capacity.  Seven of us met up at the boat slip in Channel Islands Harbor at 8:30am and were ready to go by 9am.  Only to find out, just before we pushed off, that we had some dive gear issues…

The divers for this outing were: Kim Cardenas, Dave Merrill, Abigail Sanford, and Geoff Walsh.  Helping out on the decks were Jeff Connor and Hayden Vega. 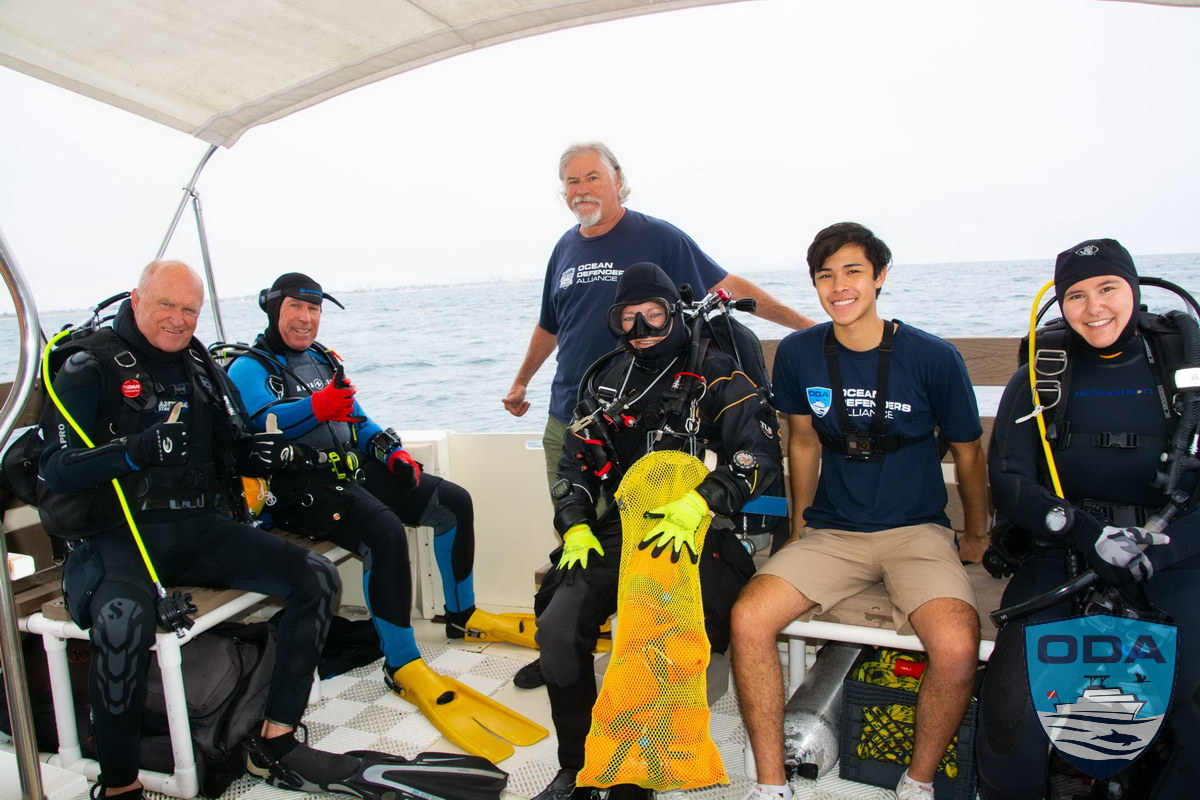 This was the first time out for Abigail and Hayden.  I had met them a few months ago while working with some students on an ODA project.  They attend UC Santa Barbara.

Abigail is a scuba diver and got her rescue certification just so she could dive with us.  Wow, is she motivated! 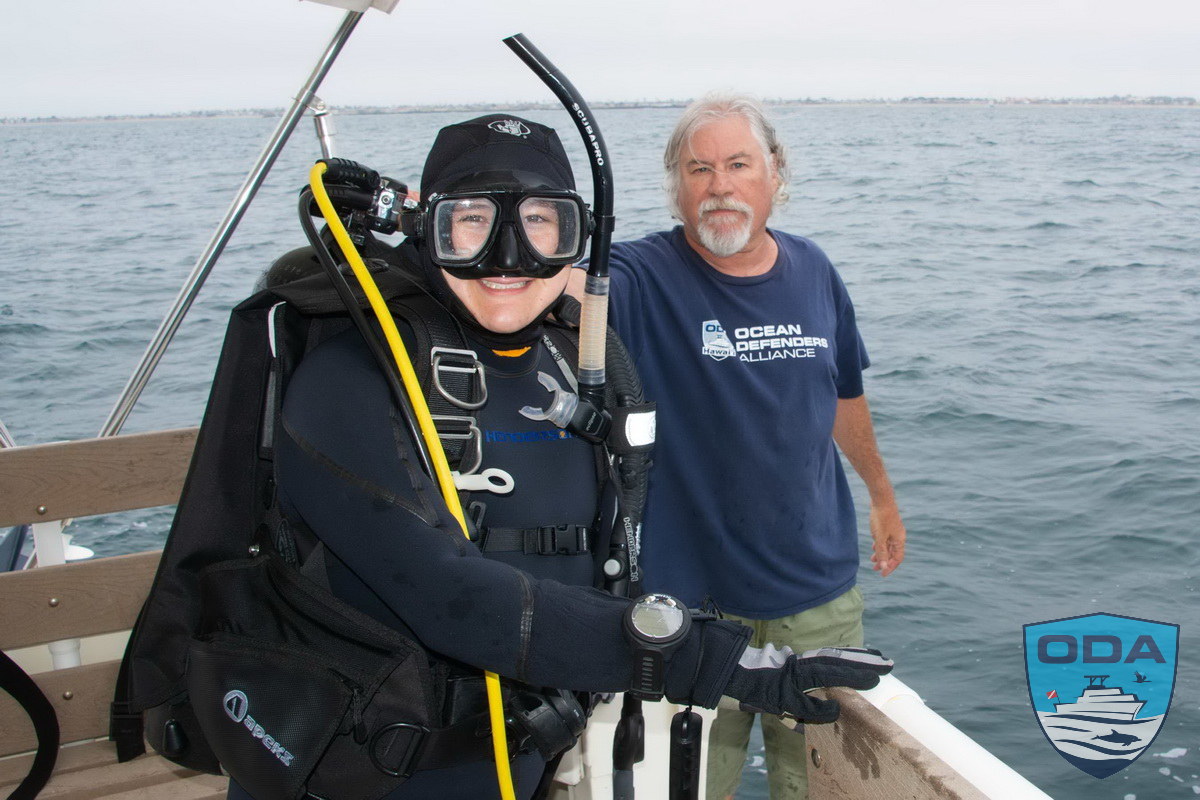 Due to the fact that Abigail is a newbie to ODA dives, we wanted to start out slow and show her how things go underwater.  So, we headed to a wreck site close to the harbor, called the Little Joe. This recreational boat is about 28-feet long; unfortunately, we don’t know the details of why it sank. Once we located the site, we sent Kim, Dave, and Geoff down with Abigail to see if there was anything worth removing off the wreck.

Great pic below of Abigail splashing in. Check out the photo gallery below for the entire series of her entry into the water -- frame by frame! 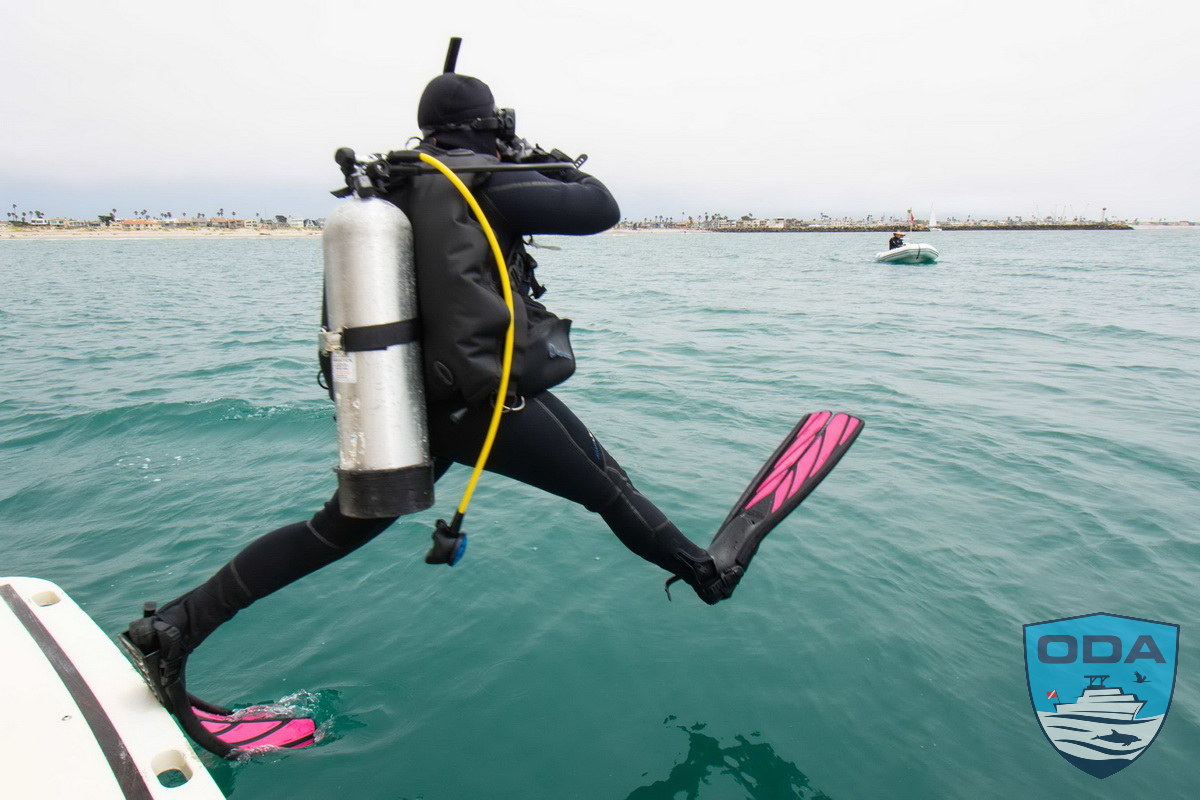 Even though there were no white caps, the seas were pretty rocking, and the occasional 4 foot waves made for a bouncy ride out.  Even when we dropped the anchor it was not easy to stand up straight.

Check out the pellies doing a "fly by"! 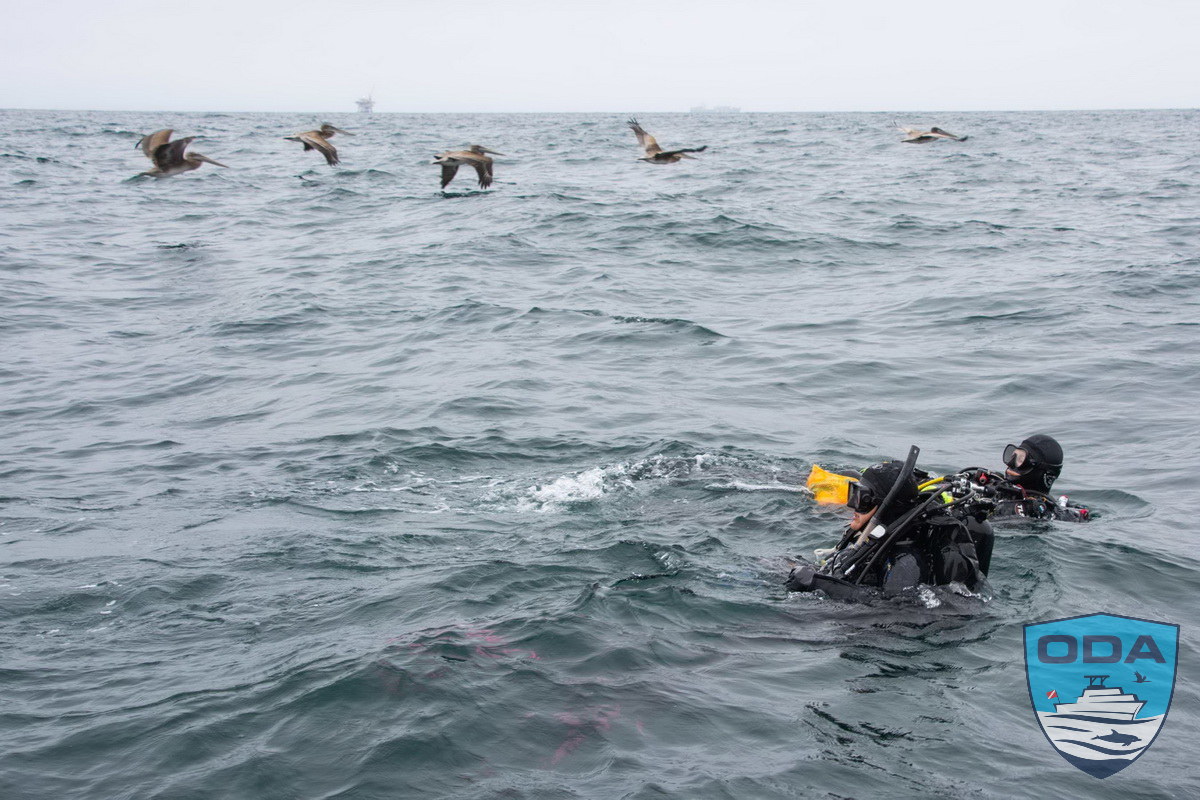 The site was in 50 feet of water, and we had dropped the anchor right next to the wreck, so the divers didn’t feel they needed to take the scooters with them, and they moved around the old-fashioned way.  By kicking with their fins!  A novel approach for us, as we always use the scooters…

This allowed Kim and Dave, both Dive Instructors, to show Abigail the ropes so to speak.  Because the wreck was so small, they had an easy time circumnavigating the entire thing in a few minutes.  They saw a few good-sized halibuts, one about four-feet long and others in the nine-inch range.

Kim and Abigail paired up and went one way; Dave and Geoff covered a wider range.  While they didn’t find any traps to remove, they did find some trap remnants and sent those to the surface with a lift bag.

As soon as that bag broke the surface Jeff and Hayden got in the RIB and went to retrieve it. 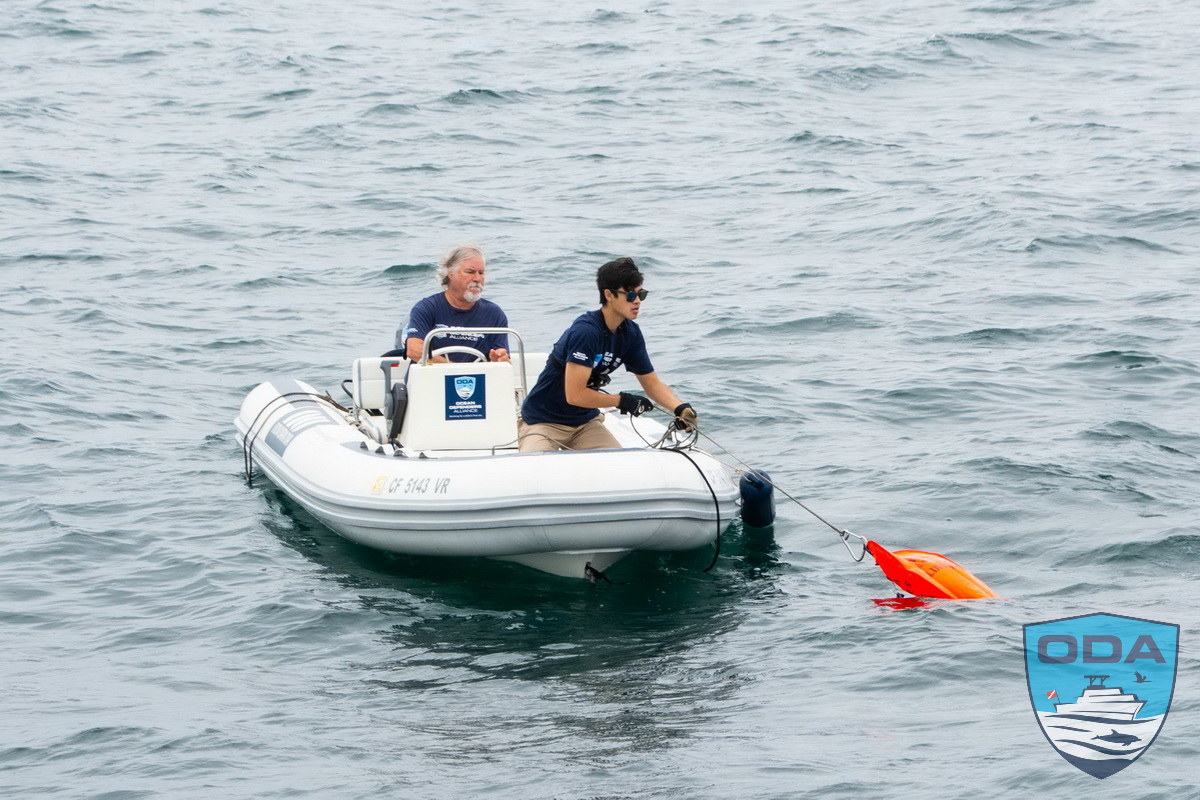 The divers all surfaced at the same time after a 30-minute dive. 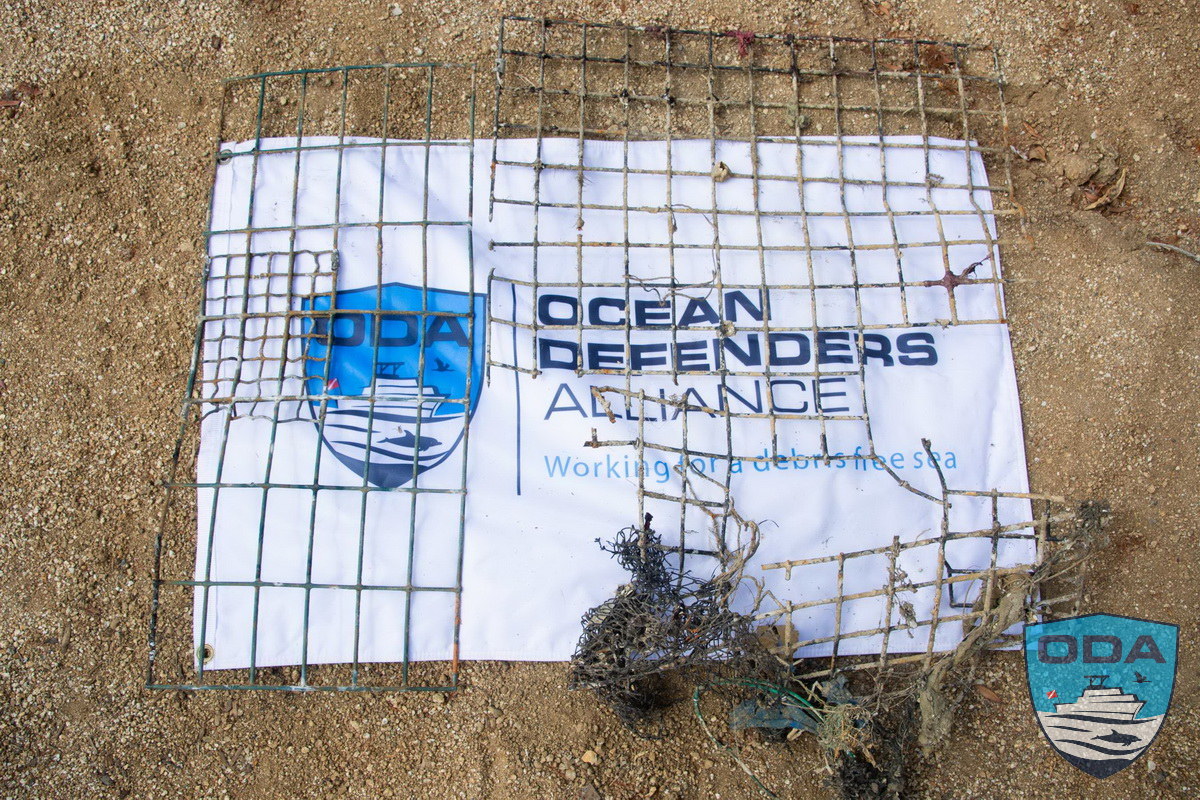 While the underwater visibility was pretty good, at about 20 feet, the topside conditions were getting pretty challenging.  So, we decided to head to a spot just inside the breakwall.  We dropped the anchor 60 feet away from it, where it was nice and calm

Since Abigail had never operated a scooter before, Kim was kind enough to coach her through the mechanics of it. 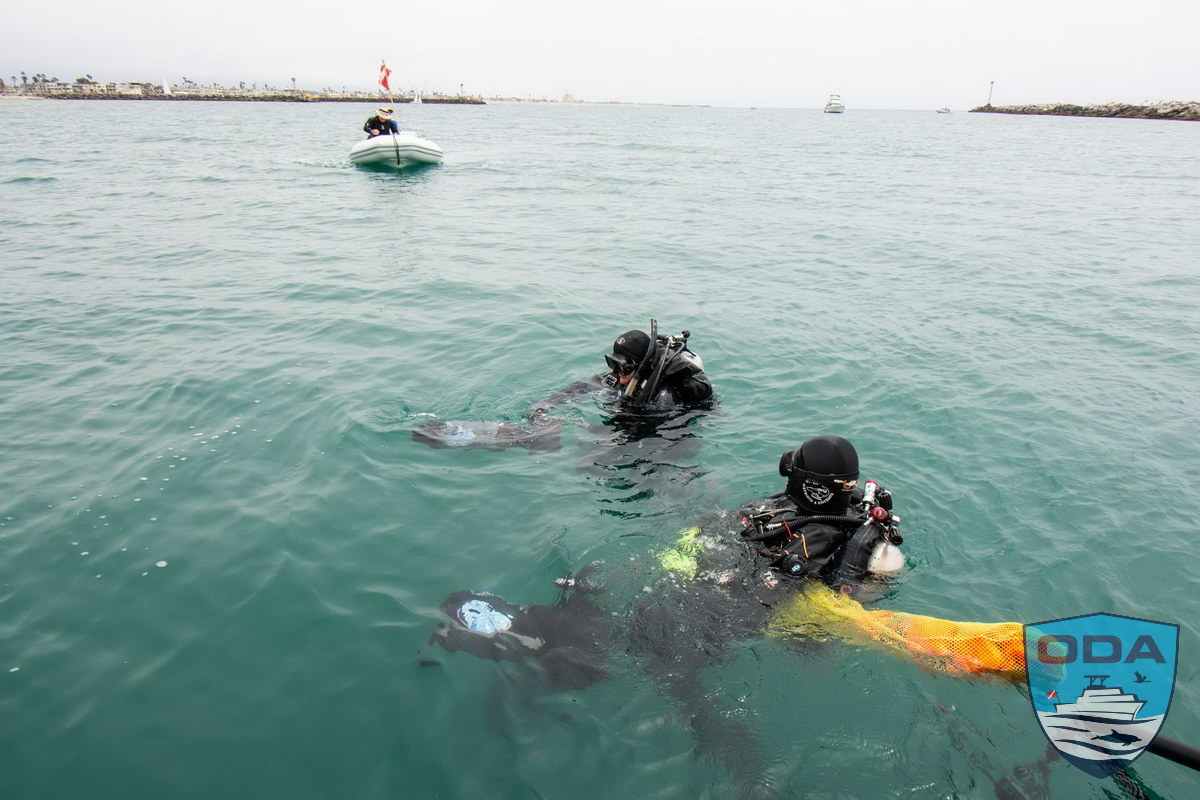 After 20 minutes of going over the basics on the boat, the two of them jumped in the water and went for a test run.  They came back to the boat after cruising around and we headed back to the boat slip.

While it wasn’t a productive day as far as removing traps or nets, we did train another SCUBA diver for future outings.  This is especially positive because of her age.  It’s not often that we get young people to go out diving with us.  In fact, I think this is the first time we’ve had someone in their 20s doing it.

Thanks Kim, Jeff, Dave, Abigail, Hayden, and Geoff for giving up your Sunday to help the oceans.  You guys and gals rock!

If you'd like to come out on one of our boats -- in CA or HI -- please check out our Volunteer page and get in touch with us!