ODA is on a roll.  Four weekends in a row we’ve been out at sea and under the water removing ghost gear.

I just got back from Hawai’i on Tuesday, June 1st where we had three successful outings in a row hauling in 70 fishing hooks, 700 feet of fishing line, 16 rubber tires, and another 2,900 pounds miscellaneous marine debris! 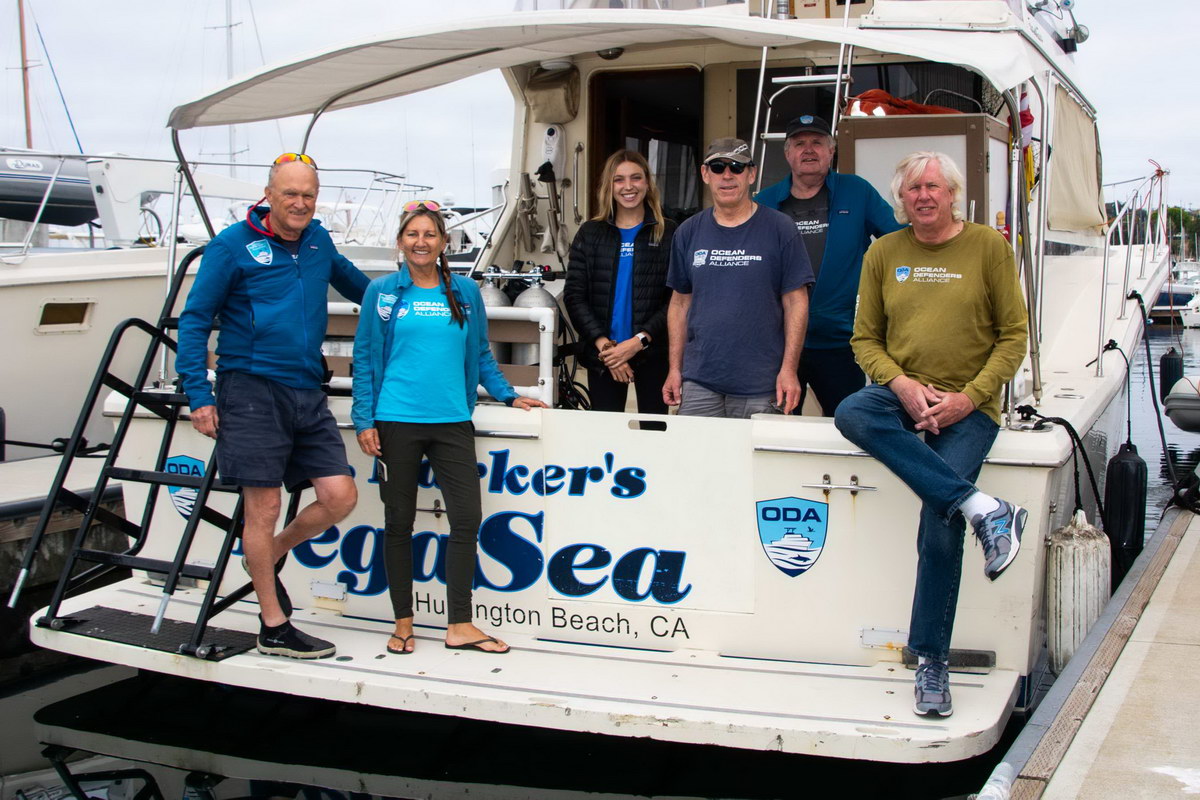 With Memorial Day behind us and the summer to look forward to, our usual California crew met up at our boat slip in San Pedro on Sunday, June 6th. Our destination was the breakwall of Huntington Harbor which is notorious for “harboring” lobster traps that bump around the edge of the breakwall continuing to rip up habitat and entrap wildlife.

Be sure to check out the photo gallery after you read the article. We had multiple photographers on this day so we have over 100 photos for you to enjoy!

We met at 8:30am with good intentions to push off by 9am.  We put the RIB (rigid inflatable boat) in the water before pulling away, as we knew we were going to need it to assist the divers who would soon be sending lift bags to the surface.  But as with all things related to boats, Neptune had other things in mind.  The RIB engine wouldn’t start, the battery was dead…

So, after an hour of futzing with it we pulled it back on to the LegaSea, and finally headed to our destination around 10 o’clock. 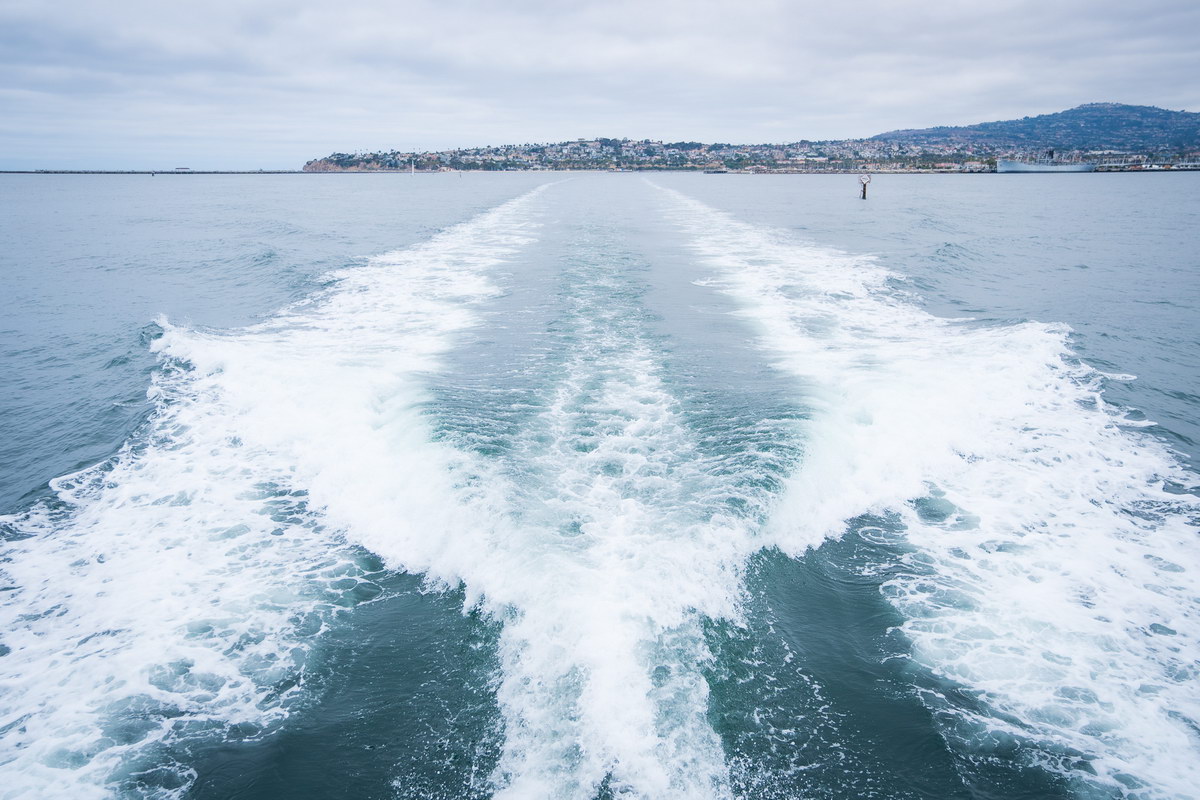 We had a nice, uneventful, ride south to the breakwall, and when we got there the surface conditions were pretty good, although there was a strong wind that created some surface chop.  Since that wasn’t enough to stop us, we anchored about 150 feet from the rocks of the breakwall and once we made sure the anchor was holding the boat steady in place, veteran ODA divers Kim Cardenas, Al Laubenstein, and Geoff Walsh went splashing in. 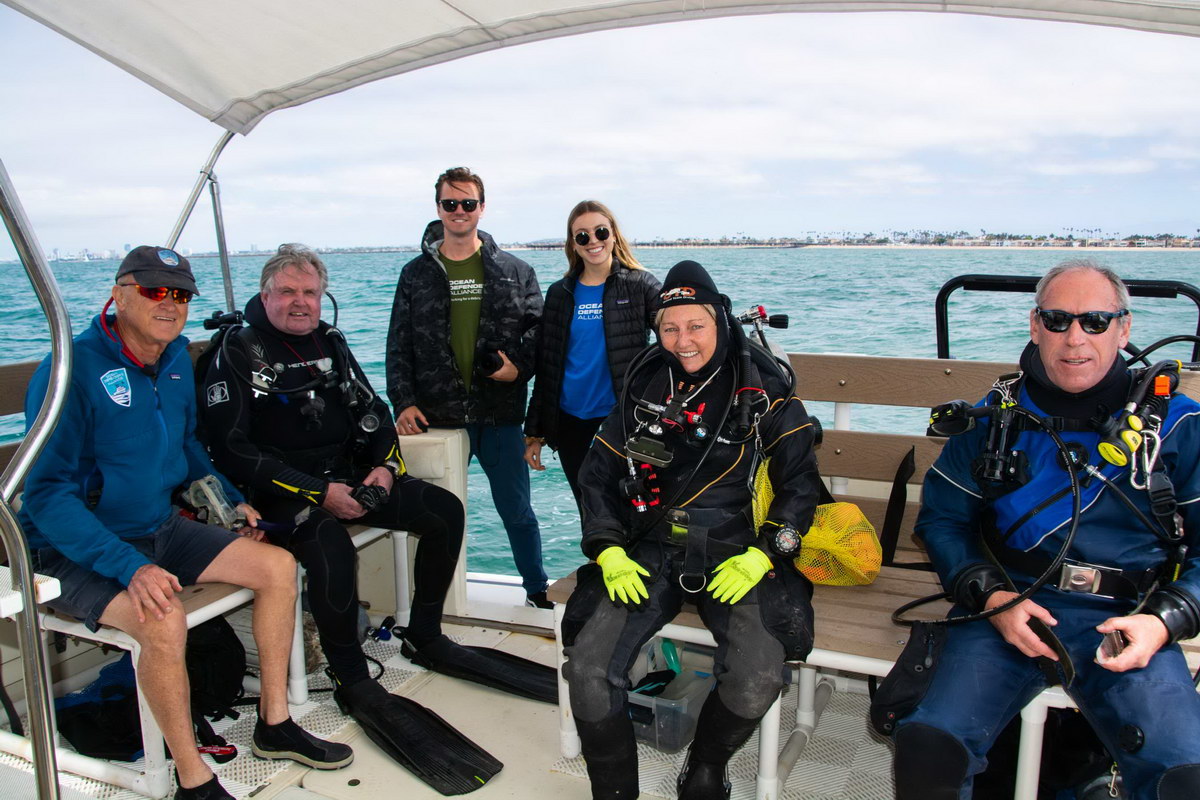 The deck support crew was Pete Markel, Dave Merrill, Hannah Nelson, and me.

Dave handed all three divers their scooters and off they went to the wall. 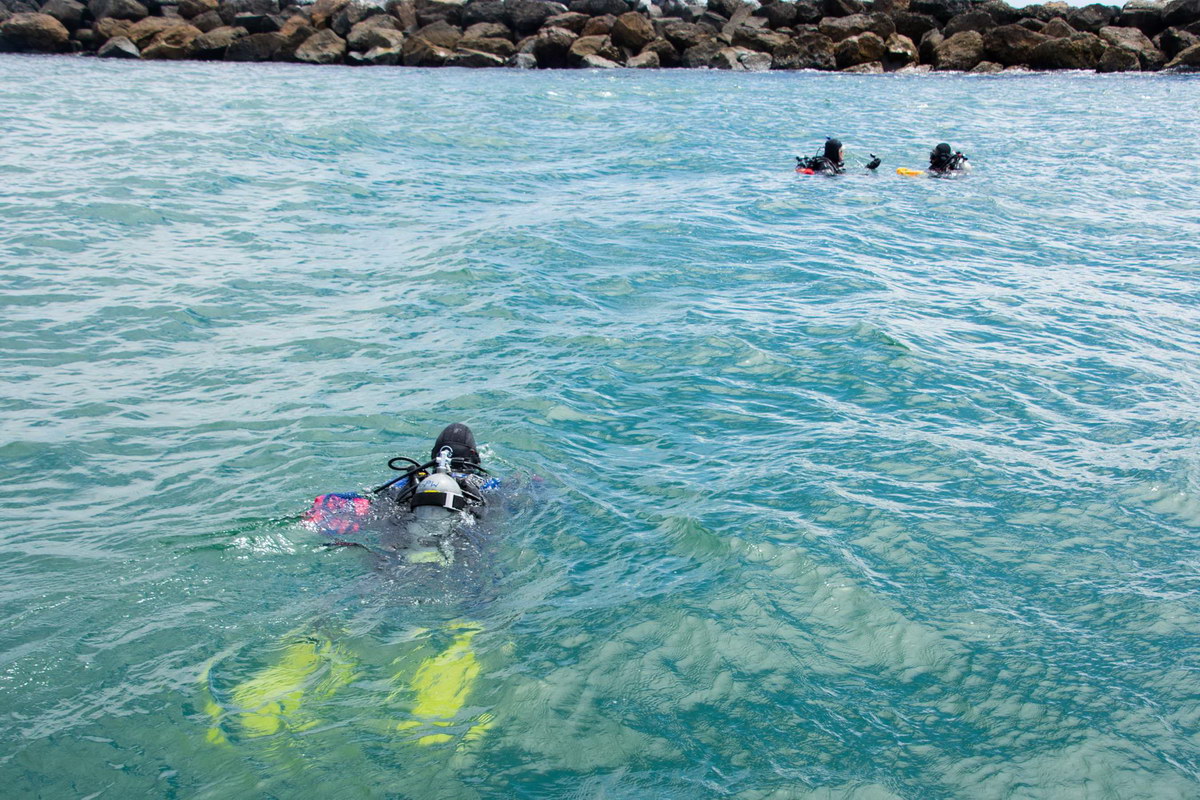 Once there, they had a quick conversation about how they were going to approach the dive.  Their plan was to drop down and then head to the far end of the wall.  This is where we’ve found several traps in the past. 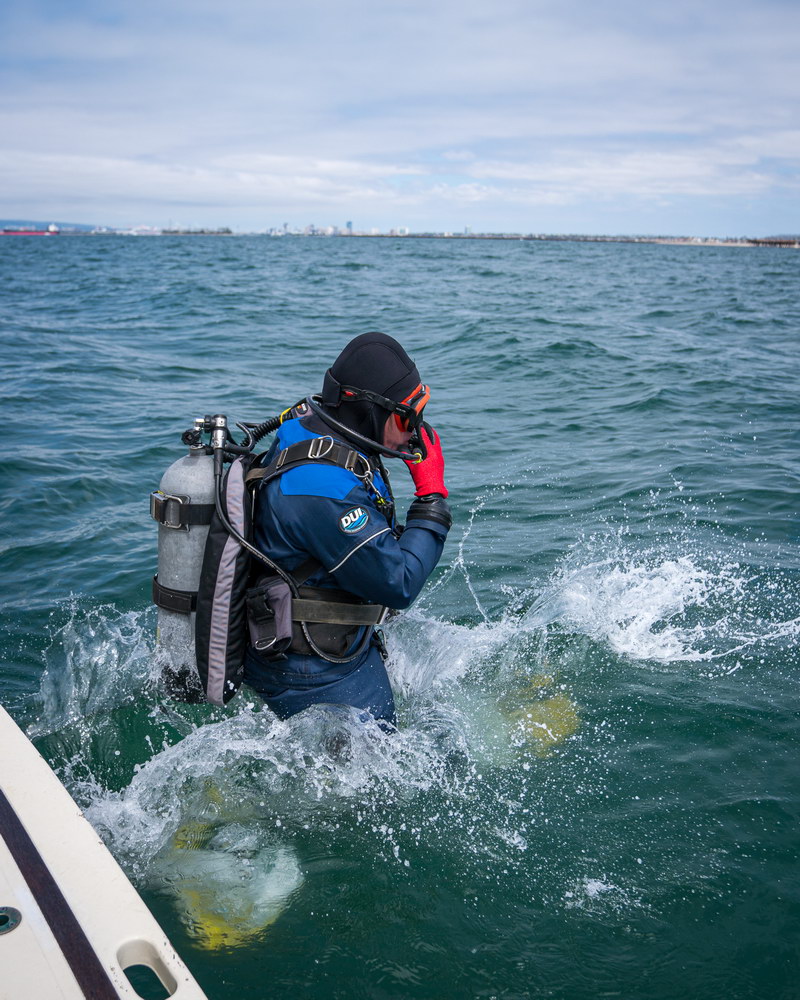 At the surface this all made sense, but once Kim, Al, and Geoff dropped down they were hit by the reality that they could hardly see their hands on their arms, let alone each other…

They did their best to stay close to each other, but because the vis (visibility) was so bad, they kept running into stuff before they even saw whatever it was that was in front of them.  They somehow managed to stay together for about 15 minutes but then Al got separated.  When he surfaced, he saw a lift bag that one of the divers had attached to an object and sent to the surface. 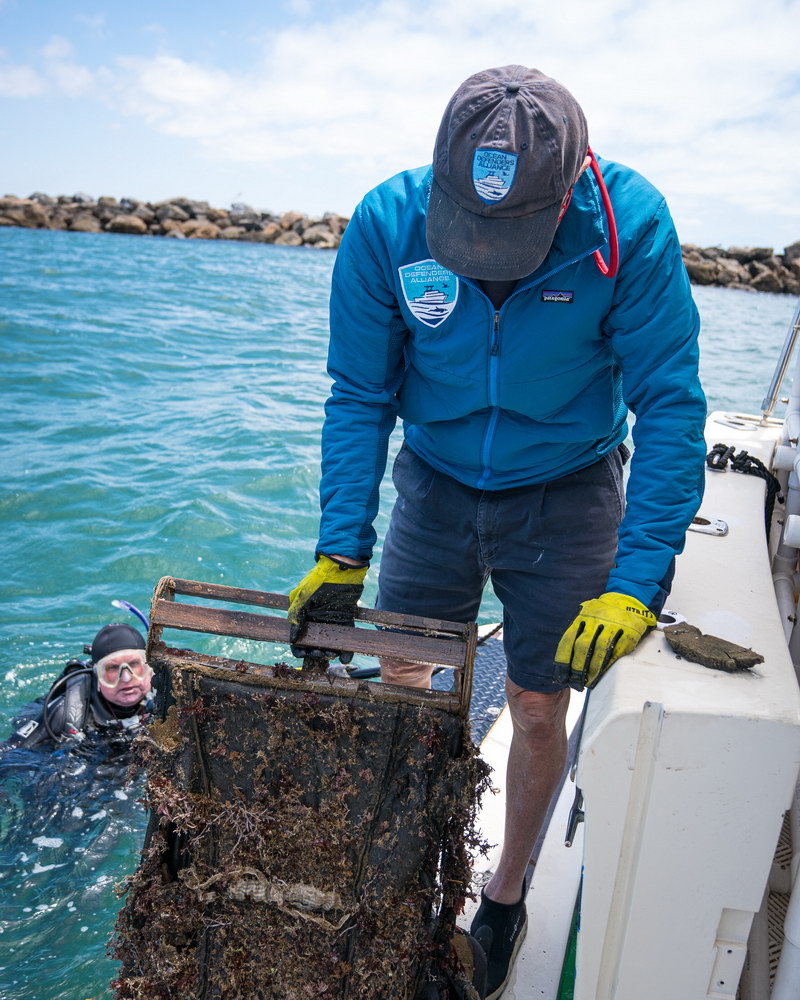 Al realized he was not going to be able to find Kim and Geoff and with one hand attached to the scooter, he grabbed the lift bag with his other hand and dragged it over to our boat.  When Dave started hauling it onto the boat, the object started breaking apart.  Turns out it was a luggage bag that had been down there quite a while and the fabric was tearing as we tried to haul it out.

We eventually got it out and put it in our garbage bin before it totally broke apart and went back into the water.

Just after that happened, we saw Geoff at the surface.  He looked for Kim at the surface and when he didn’t see her, he thought she was back at the boat so he headed there.

Just when he climbed back aboard, we saw Kim surface and she headed back to the boat.  Once onboard she said that she had found a trap and had put two lift bags on it, but it was wedged between some rocks, and she needed some help moving it out into the open.

We then pulled anchor and headed closer to where she had left a surface marker buoy that was attached to the trap.  She and Geoff jumped in and had that trap at the surface within a couple of minutes.

They had attached a long line to the trap, so once at the surface we could pull the trap closer to the boat and keep it from washing back onto the rocks.

Once we had it close to the boat, Geoff jumped back in the water (without his scuba gear) and attached the hook on the end of the davit line onto the trap. 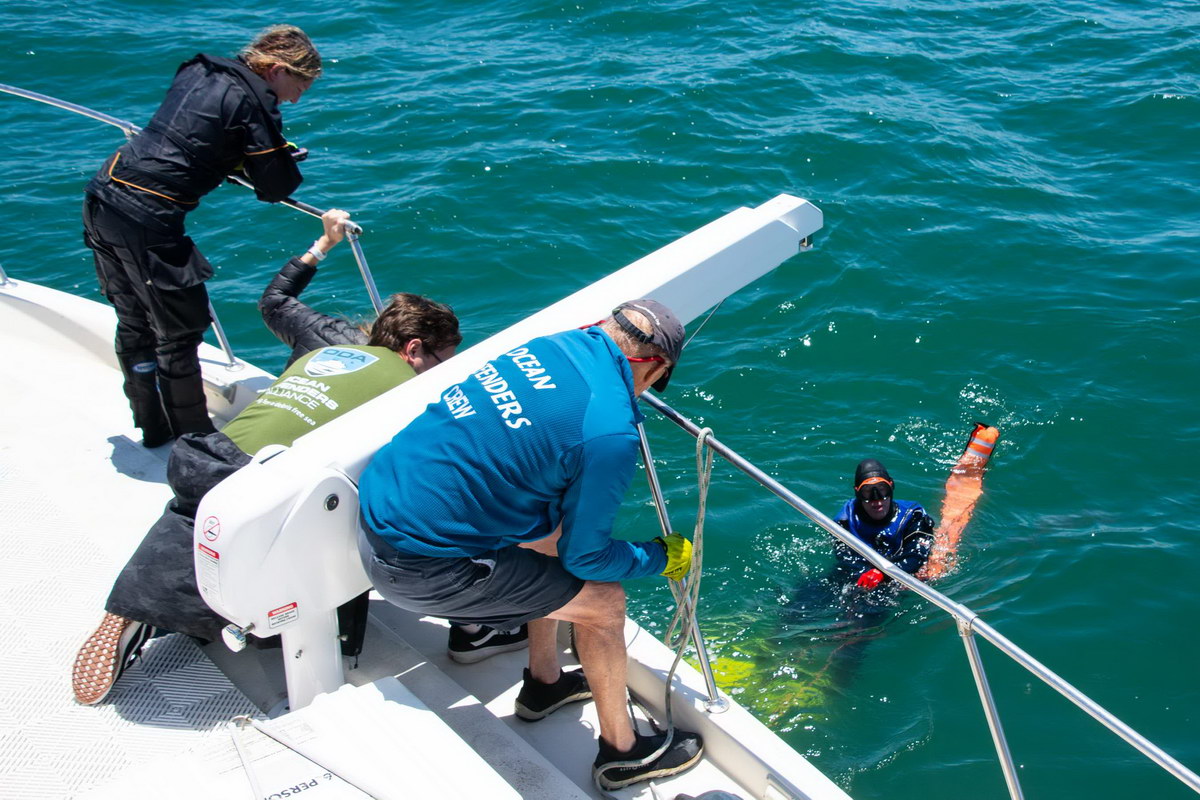 It took quite a while, but we eventually landed the beast on the front deck. 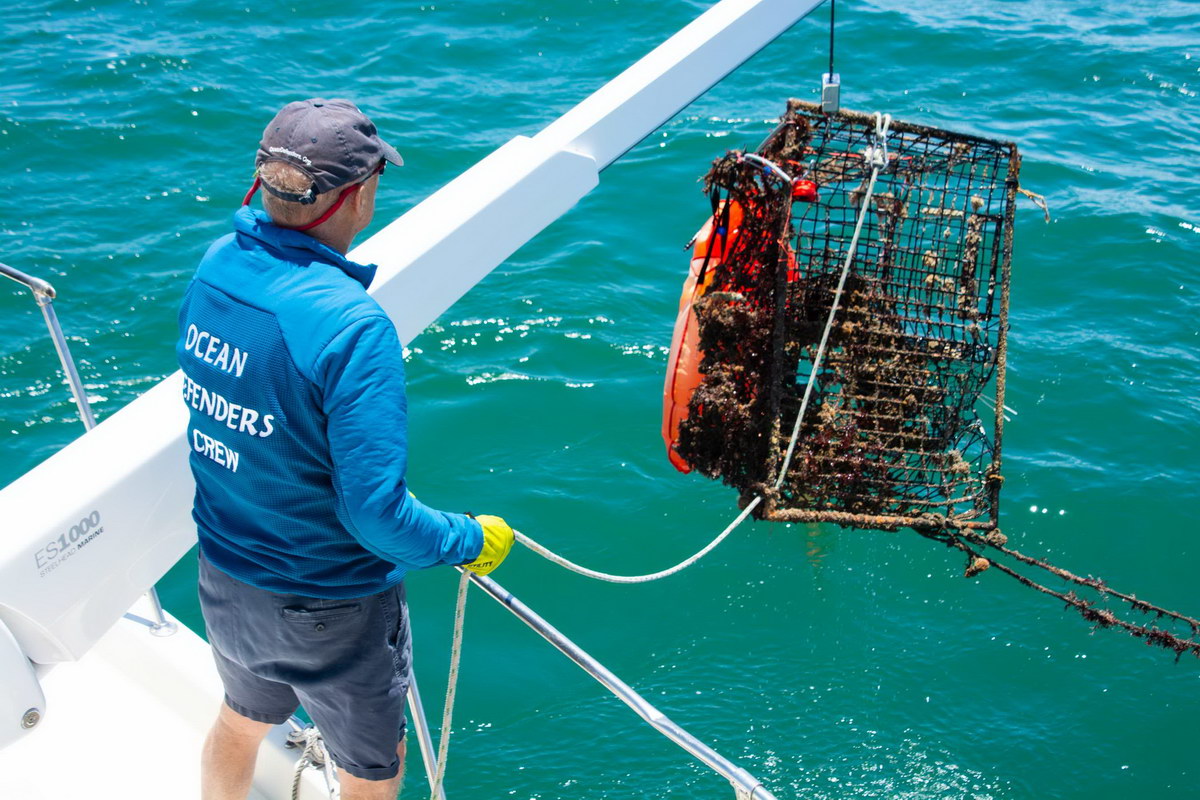 This was a big trap, 4 feet by 5 feet and weighed about 100 pounds.  But big and bad as it was, it is no longer a potential death trap for any lobsters, crabs, cormorants, or seals.

Plus, we removed about 70 feet of trap line as well!

After that we decided to call it a day.  The visibility was just too bad for us to do any more diving safely.  But it didn’t dampen our spirits.  With your help, we’ll be back out there soon! 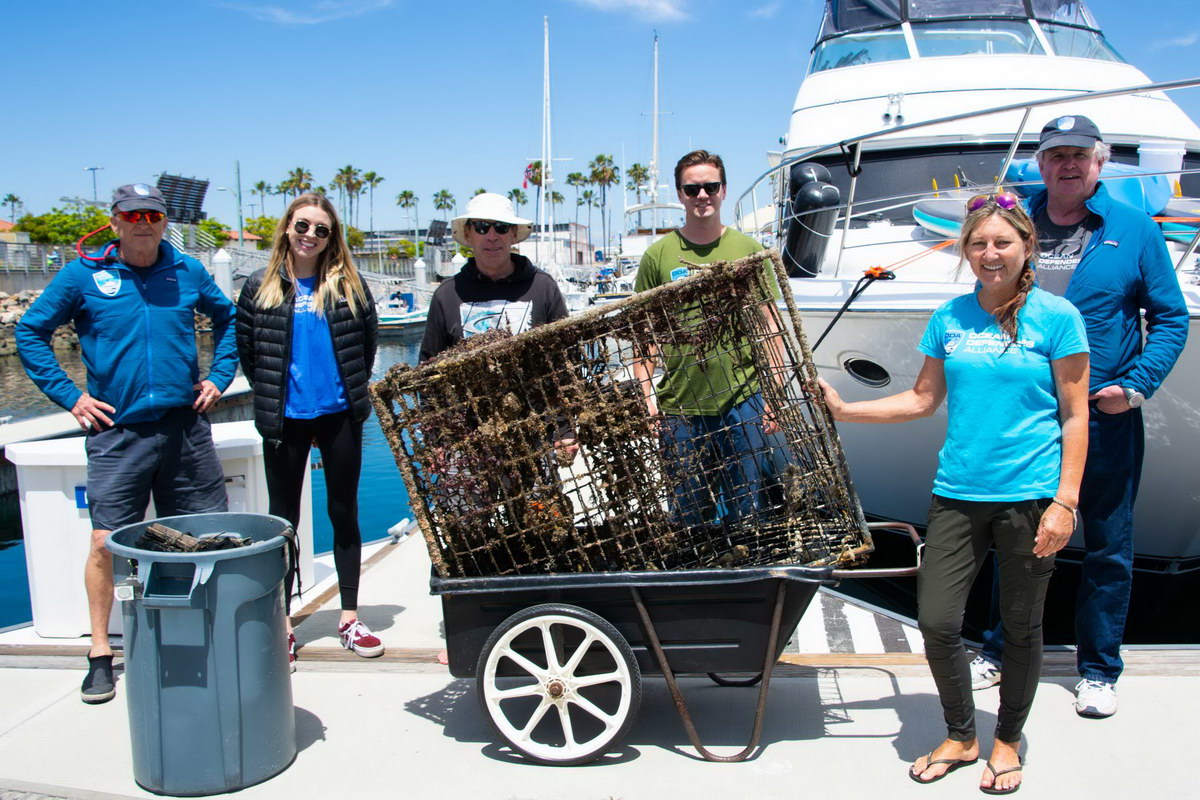 It's the season for better weather and ocean conditions, so let us know if you want to be part of our amazing ocean-saving crew -- check out our volunteer page and send us your application!