Be sure to check out the photo gallery after you read the story! 66 pics in there! :-)

After 13 months of apprehension about getting people together in close proximity to each other, we FINALLY felt comfortable enough to get 10 people out on our flagship vessel Mr. Barker’s LegaSea!

While still wearing our protective face masks in close quarters, we nonetheless feel like the worst is behind us and we can ease back into our search and recovery mode. 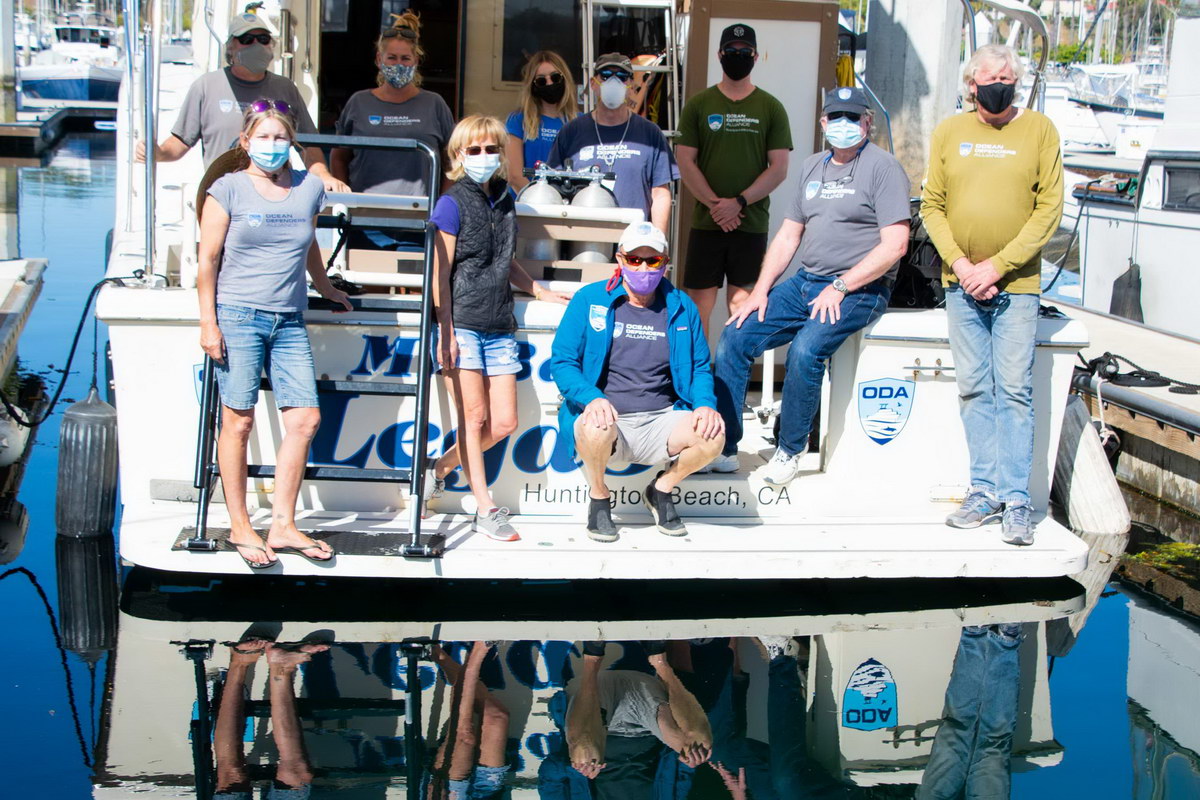 In Search of Abandoned Fishing Gear

So off we went on Sunday, April 18th.  The ODA volunteer divers were: Kim Cardenas, Al Laubenstein, and Geoff Walsh.  Helping out on the boat were: Jeff Connor, Pete Markel, Dave Merrill, Daryth Morrissey, Hannah Nelson, and Sue St. Sure.

The weather as we pushed off could not have been more agreeable.  Partly cloudy skies, temp in the mid 70’s, and no waves at all.  In fact, the seas looked like glass.  We headed to the Los Angeles Harbor breakwall and put the divers in the water about 300 yards from Angels Gate. 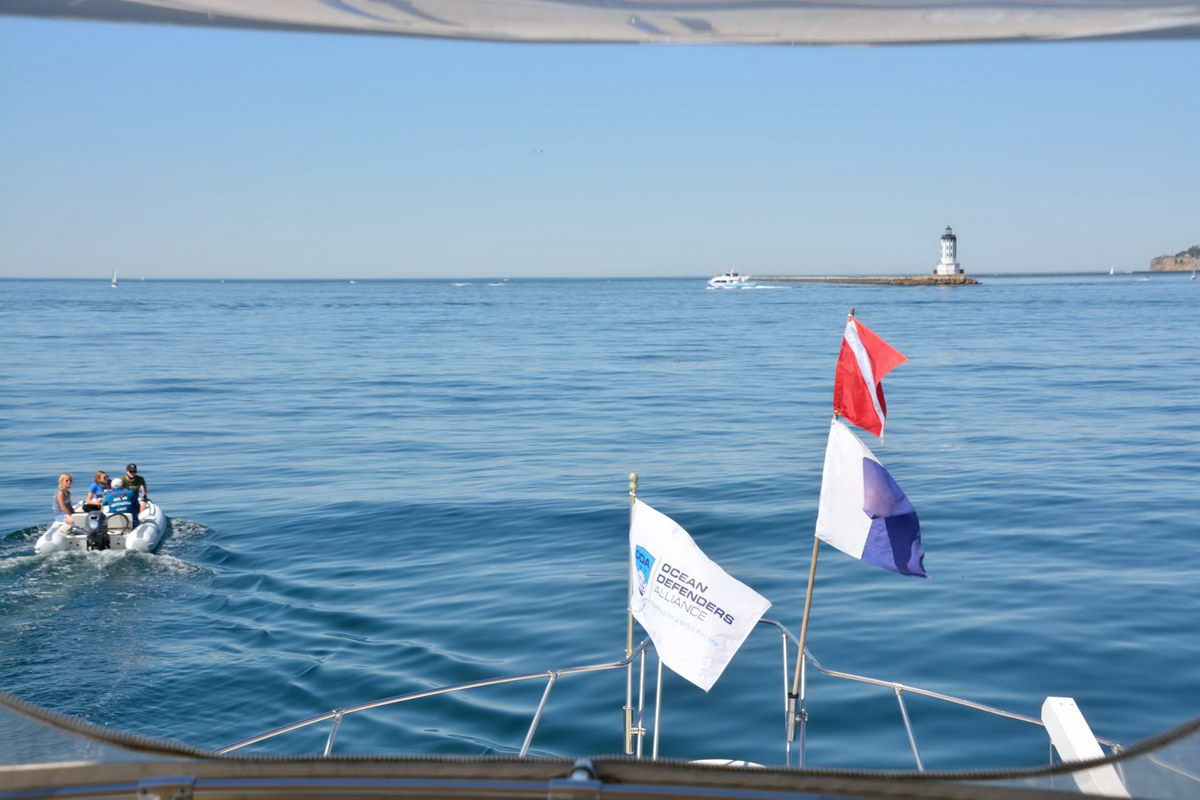 This is an area of the breakwall where underwater debris gets slammed into the wall during the winter storms that bring big swells.  Kim, Al, and Geoff all had their dry suits on, which turned out to be a good idea.  Even though the air temperature was in the 70s, the water temp was about 58. Brrrrr!

All Eyes on the Divers

As the divers grabbed their scooters (equipment that propels them underwater), Dave had Pete, Hannah, and Sue jump in the RIB (rigid inflatable boat) and follow closely behind the divers as they made their way along the breakwall.  Because it was so calm, it was easy for the RIB team to see where the dive team was at all times. 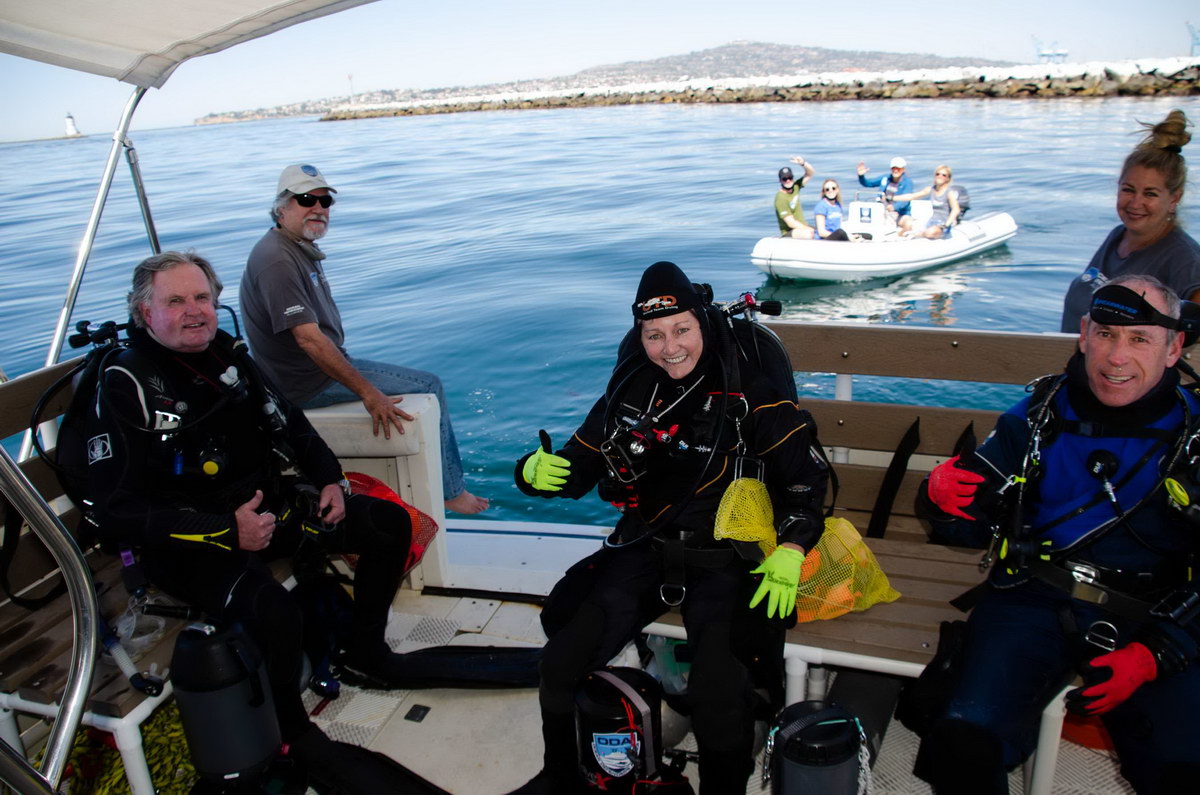 Jeff, Daryth, and I stayed on the LegaSea, and followed the progress of both teams from two to three hundred feet away.

When the first lift bag broke the surface, the RIB team went to retrieve it as soon as the divers had safely vacated the area.

Wrangling In the Catch

When Sue lassoed the lift bag, Dave (who is one of our experienced RIP crew) instructed her attach a line to it and then they towed it over to the LegaSea.  When we pulled it up, we saw that that lift bag had yielded an abandoned anchor with some chain and line attached to it. 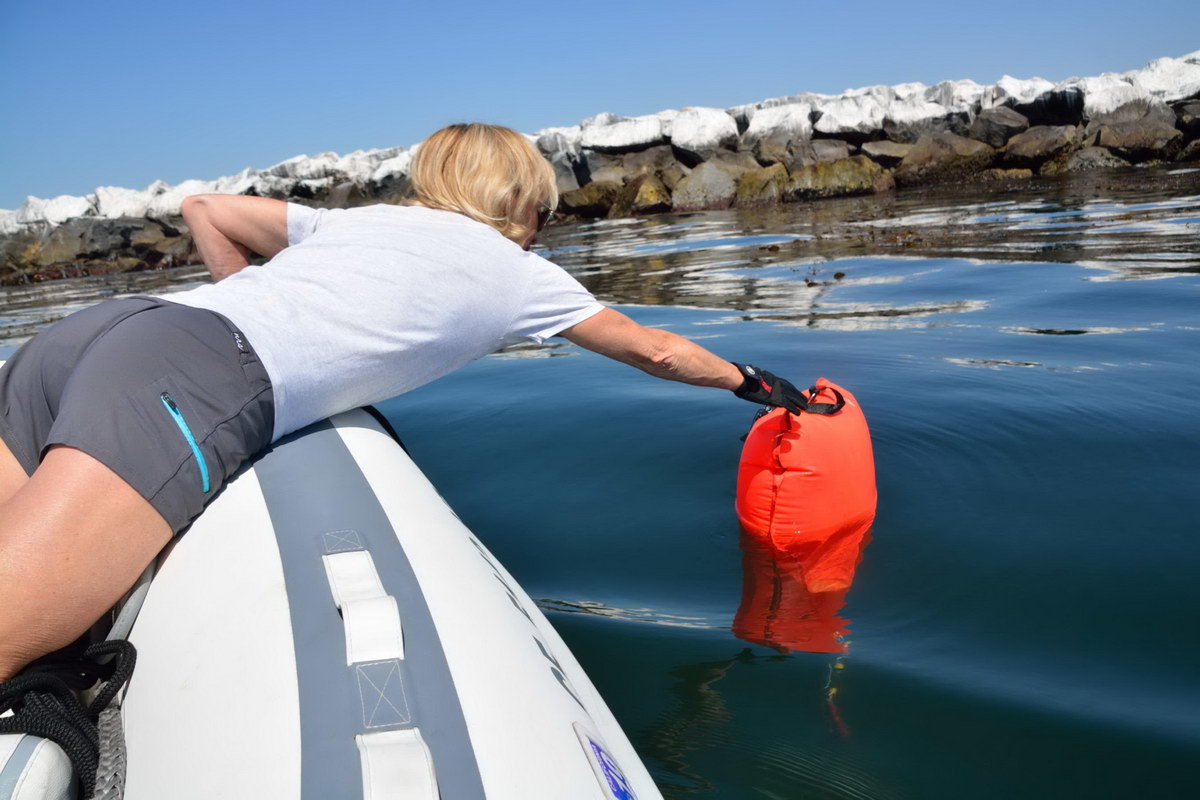 A few minutes later we saw two lift bags come up, right next to each other.  That often indicates that there’s something heavy that the divers had found.  Sure enough, as we got closer to the bags, we could see a large lobster trap just under the bags.  Cool!  Our first abandoned trap of the year!!

The RIB team slowly dragged that trap over to the LegaSea, where we proceeded to attach it to the davit (a crane mounted on the front of the boat) and eventually wrestled it onto the front deck. 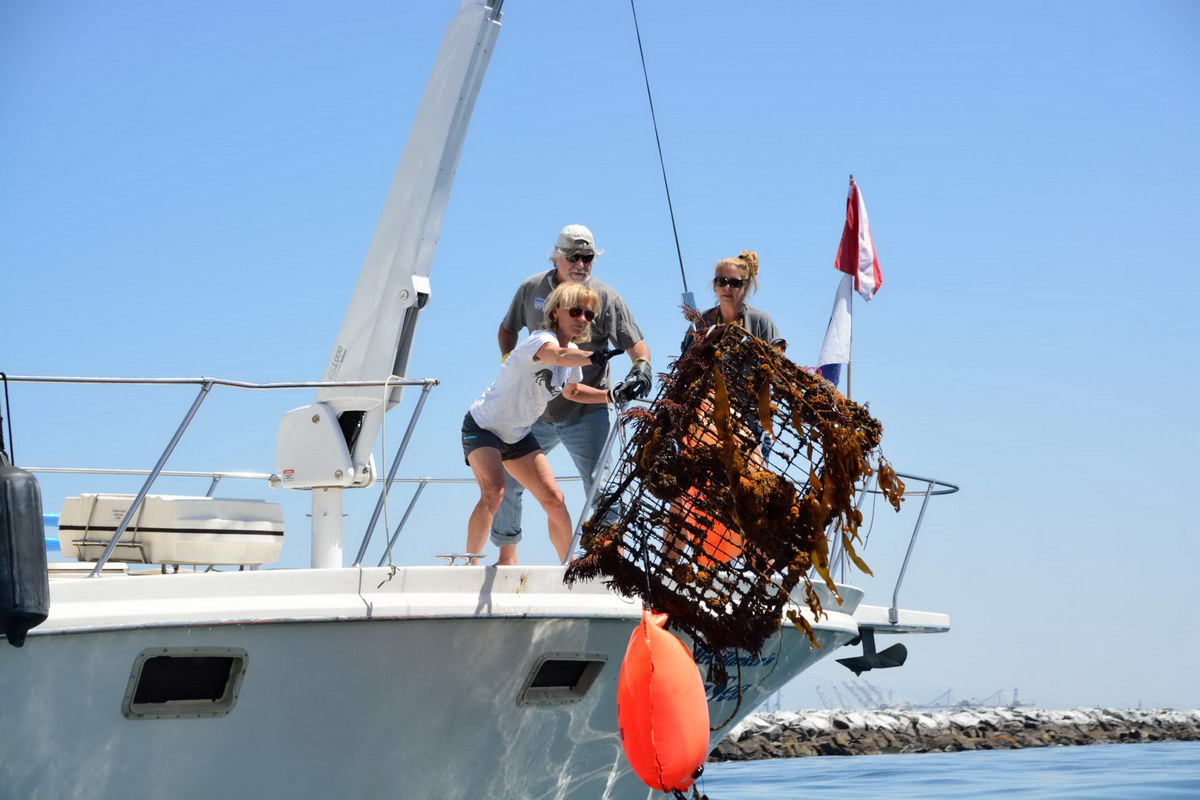 As the divers climbed back aboard, they also had two old fishing poles to add to the days catch.

Although the divers were down a long time, 50 minutes to be exact, it turns out that the underwater visibility was horrible… less than 6 feet.  It was so bad that Al got separated from Kim and Geoff, twice.  After hearing that, we decided to play it safe, not push our luck, and called it a day. 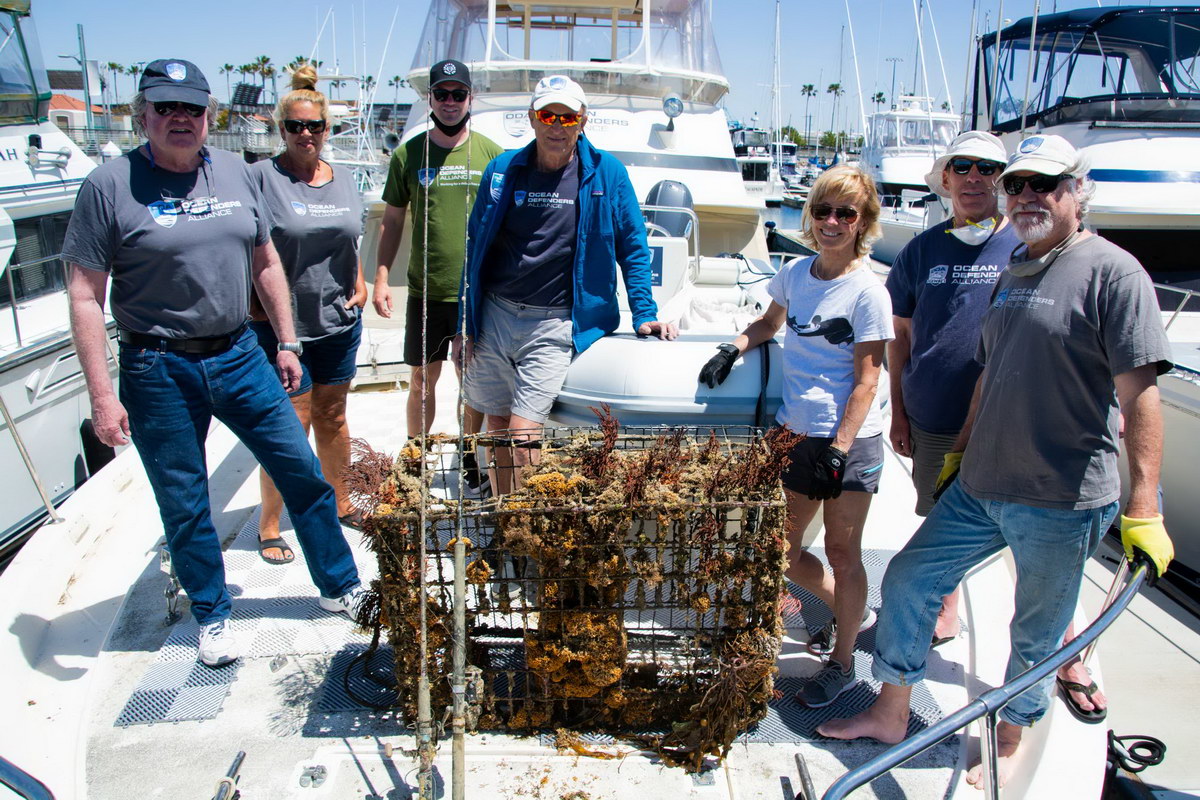 Thanks to Kim, Al, and Geoff for being such dedicated ocean defenders to dive in such trying conditions.  Thanks also to Pete, Jeff, and Daryth for taking the pictures.  And of course, Dave, Hannah, and Sue for pitching in and doing all the dirty work.

It was GREAT to be back out in action once again.  And we all agreed to give it another try next weekend.  Stay tuned!

Want to hear more about our vessel? Check out our LegaSea page!