Be sure to check out the photo gallery below with over 60 photos of this magnificent cleanup and all the beautiful people taking part in it!

Today was a day for the ages.  July 10th, this past Sunday, will go down as a momentous day in ODA history: Over 2 tons of debris and about 10 tons of enthusiasm and hard work from the phenomenal volunteers!

This was our eighth cleanup at Honokohau Harbor, which is about 10 miles north of Kona, Hawai’i. 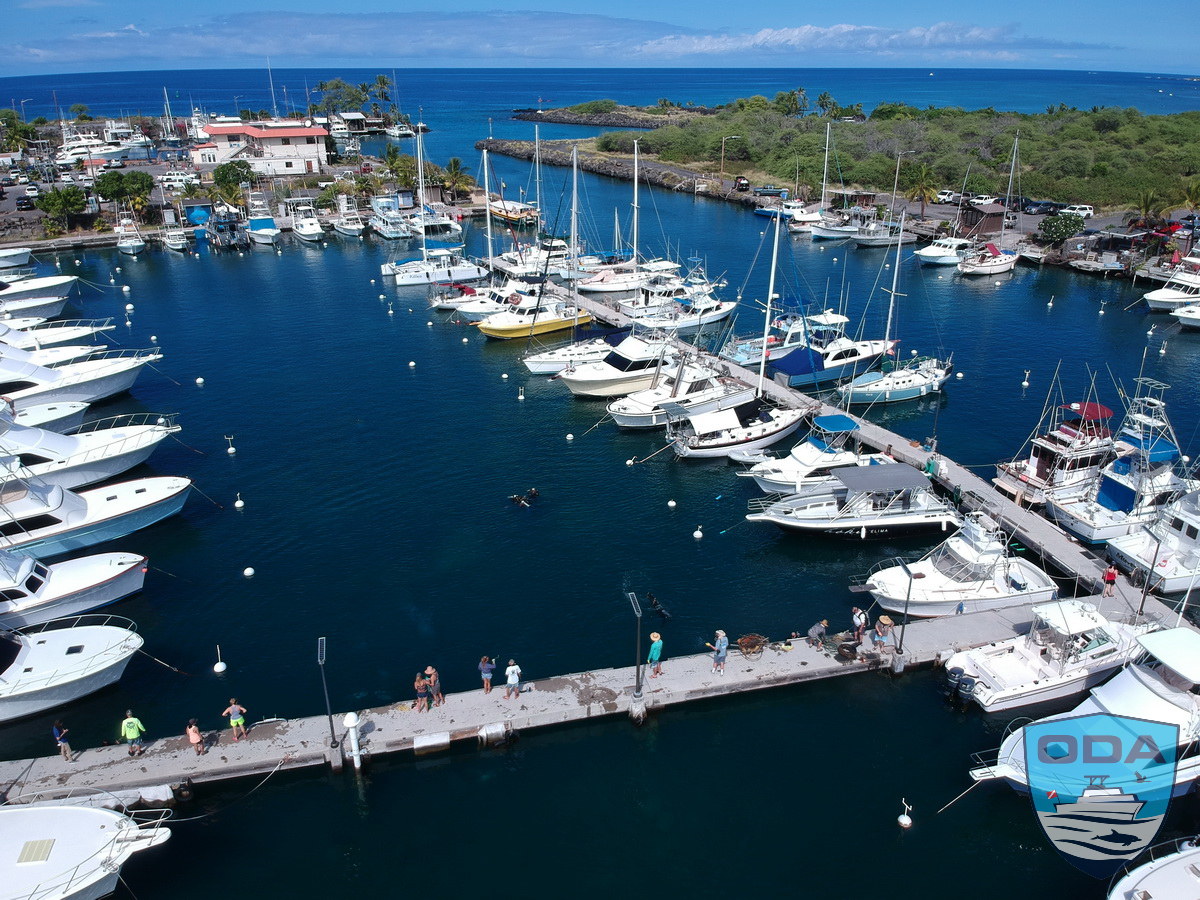 We started this "harbor cleanup tour" project in 2018 and finished the main areas on this brilliant sunny Hawaiian morning, with 28 people lending their time and energy to the cause.

Four years ago, we started the harbor's marine debris removal strategically -- one section at a time.  Over the years, we've steadily moved outward from the southwest corner, and on this day, completed our underwater cleanup tour of the harbor by cleaning the northwest side. There's still some more scattered debris we'll come back and get, and we know that more will accumulate over time, but right now we want to celebrate the fact that we visited all the main sections and removed tons of hazardous and toxic debris, making the harbor a healthier home for wildlife (and anyone who ends up in the water!).

ODA has been working in conjunction with Jack’s Diving Locker since the beginning of this project, and they were well represented for this final leg.  Teri and Jeff Leicher, owners of Jack’s, were there getting down and dirty.  Also representing Jack’s were Kaitlyn, Will, and Joe from the shop.  Missing, but NOT forgotten were Matt and Chrissy Bogdanovitch, who were instrumental in getting these cleanups going since our very first outing. We’re thankful for you all!

We got a good shot of Kaitlyn, working hard as always. :-) 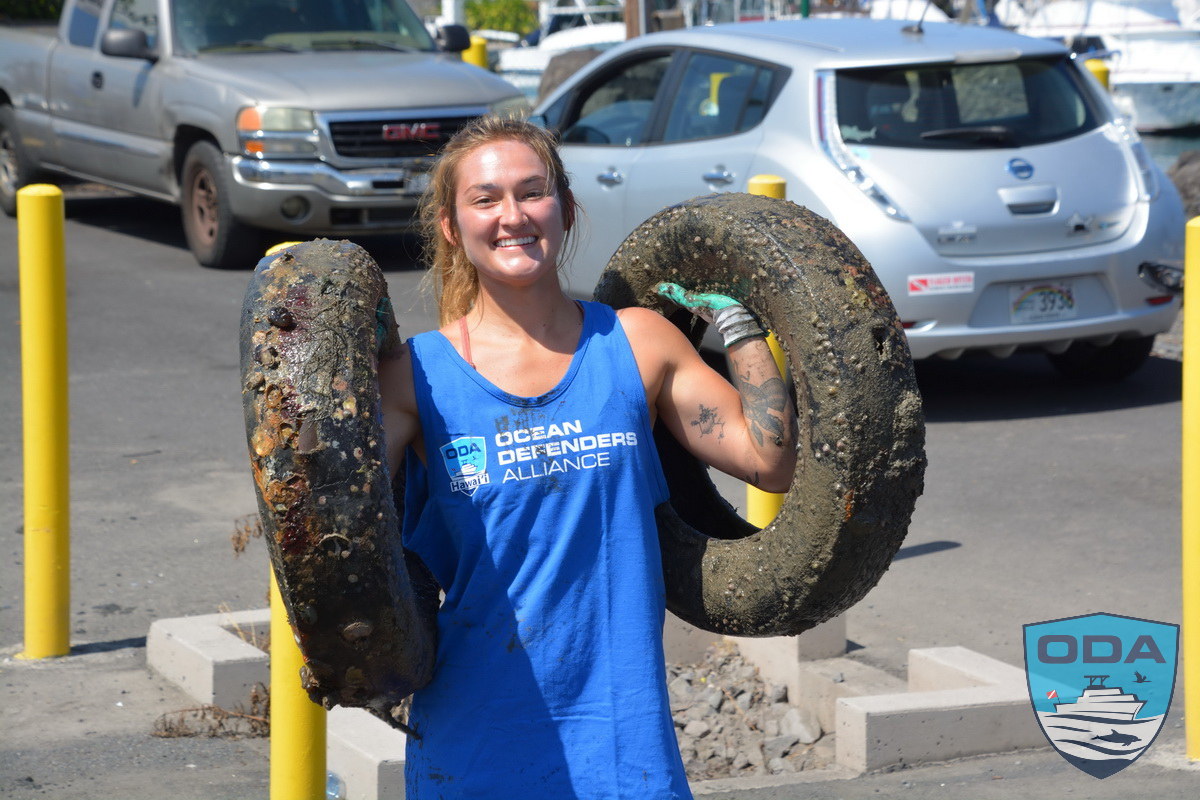 The morning started with a meeting in the parking lot of the harbor at 9am. I gave a brief presentation about what the people on the docks could do to help the divers haul the debris out and get it to our staging area. 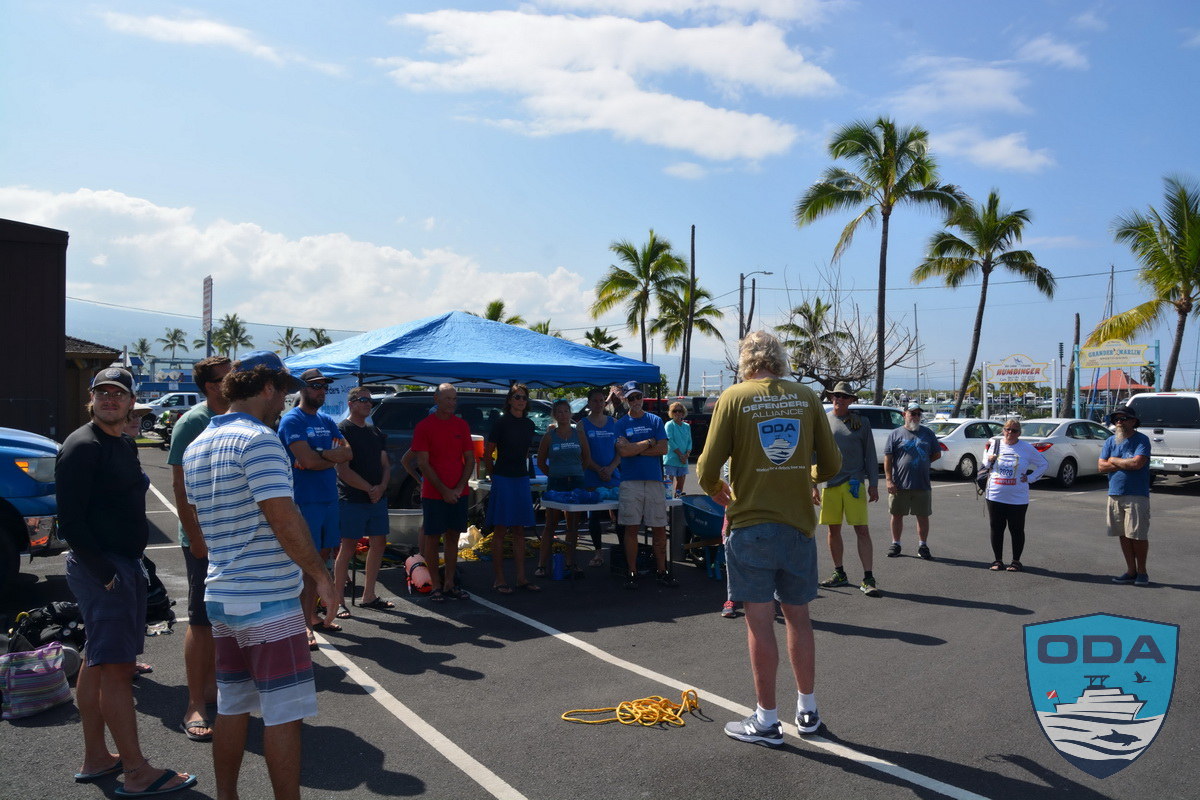 Sarah and Jeff Milisen were there, both are on ODA’s Board of Advisors.  Sarah is now ODA’s lead representative for the Big Island of Hawai’i, and she did her usual stellar job during the briefing informing the divers of what they could expect when they jumped in to perform the removal process. 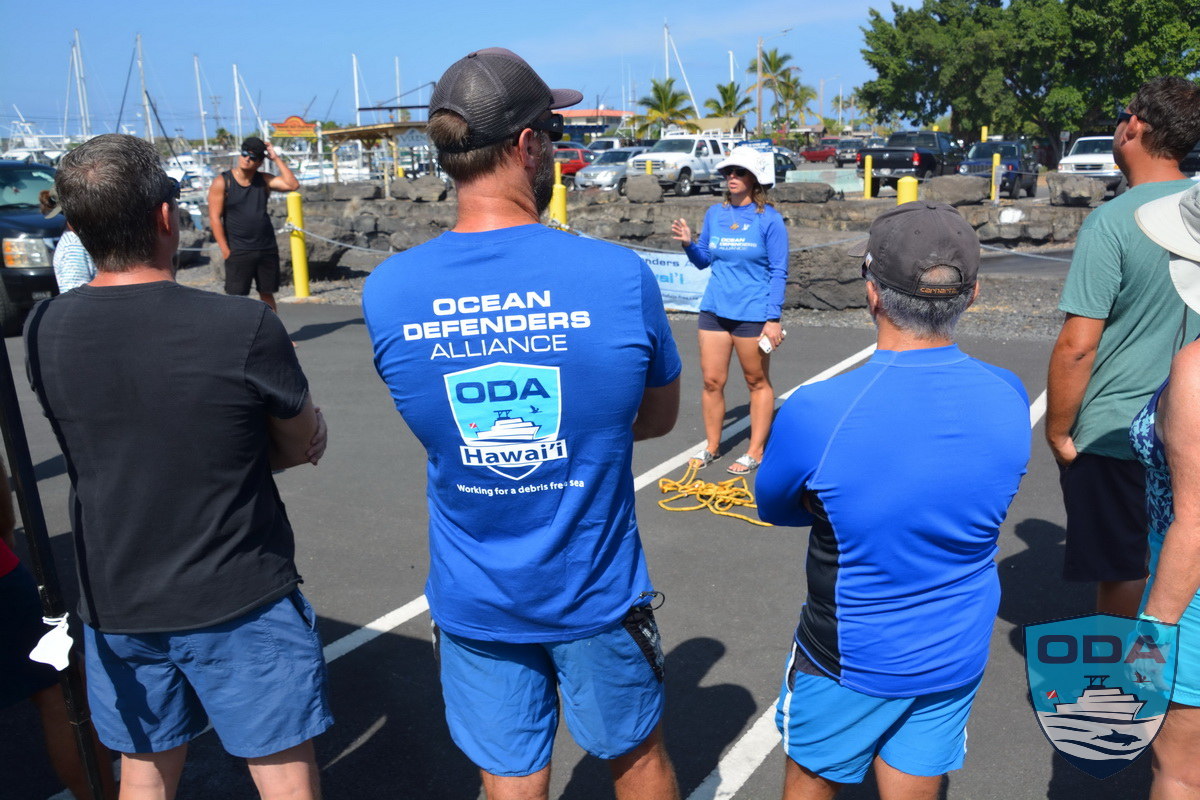 Around 9:30am, the first divers started plunging.  When they started, the water was so clear you could see dozens of tires littering the bottom.  Within minutes, the deck crew started hauling up what the divers had hooked up to the haul-out lines and the water became murky with all the mud that was kicked up.

It started out as tires, tires, and more tires, but soon the divers were finding a plethora of other debris items: hoses, PVC tubing, aluminum brackets, large sections of carpeting, snorkels, masks, flip flops, and then some really disgusting stuff… lead acid batteries! 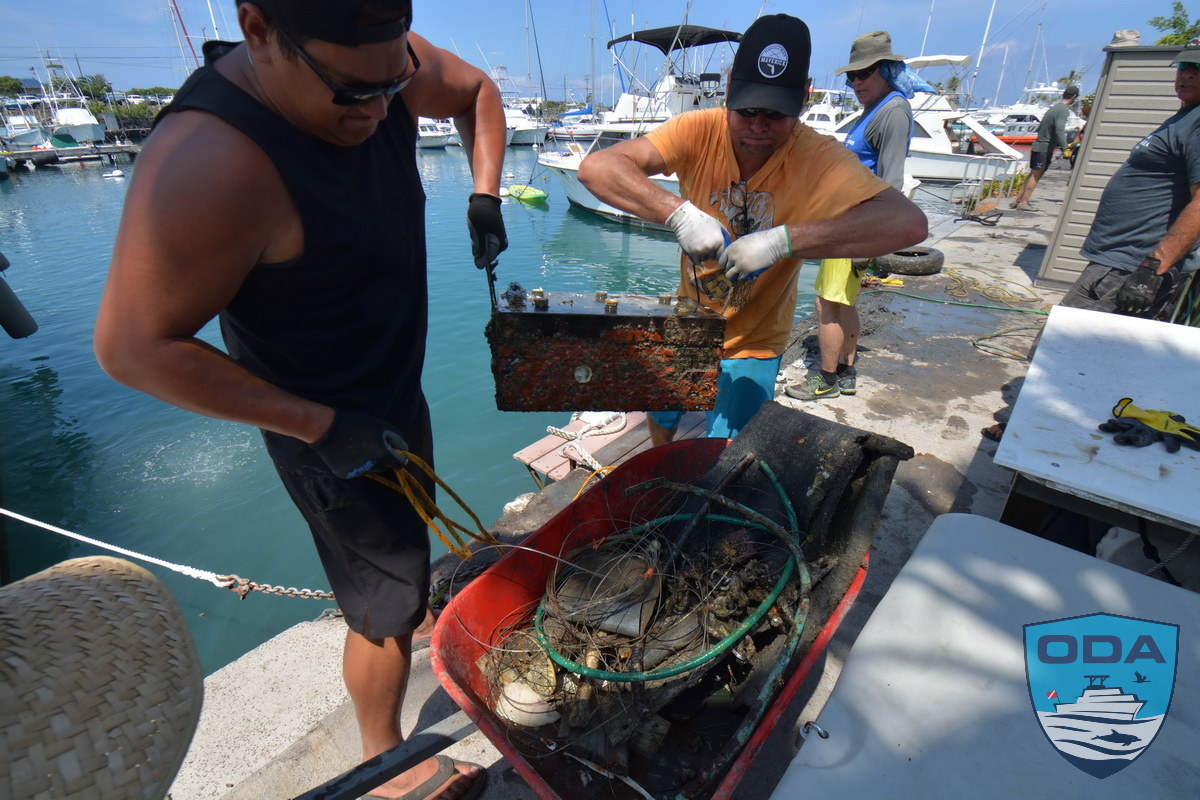 We found and removed a total of six huge batteries.  Each one weighs about 125 pounds.  Four of them were under one boat alone!  It’s obvious some people don’t care about the damage that acid can do to animals, corals, and other critters, nor do they care about the toxic legacy of all the lead in those batteries. 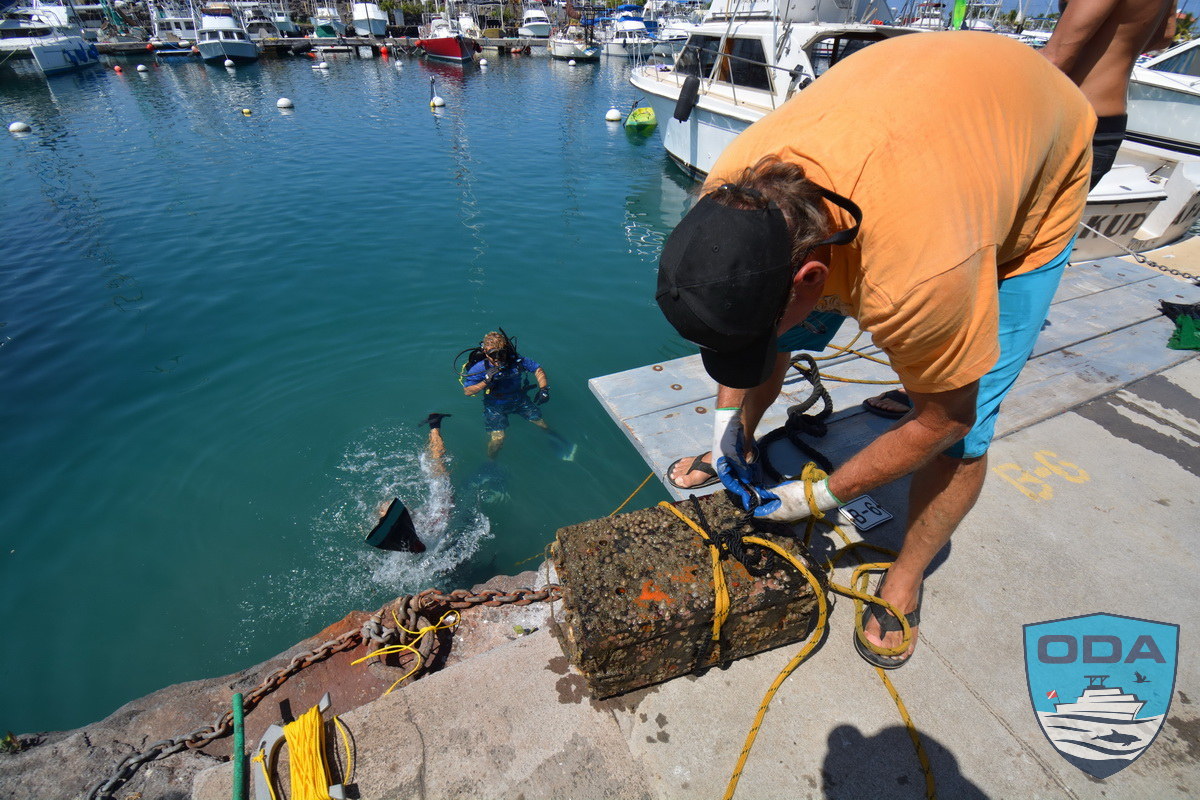 In addition to those six boat batteries, we removed another three car batteries.

Our Advisory Board Member and Oahu Coordinator Marjorie Zensen flew over from Oahu to join the effort. Here she is below "pulling her weight" with her fellow ODA Island of Hawai'i deck crewmembers! 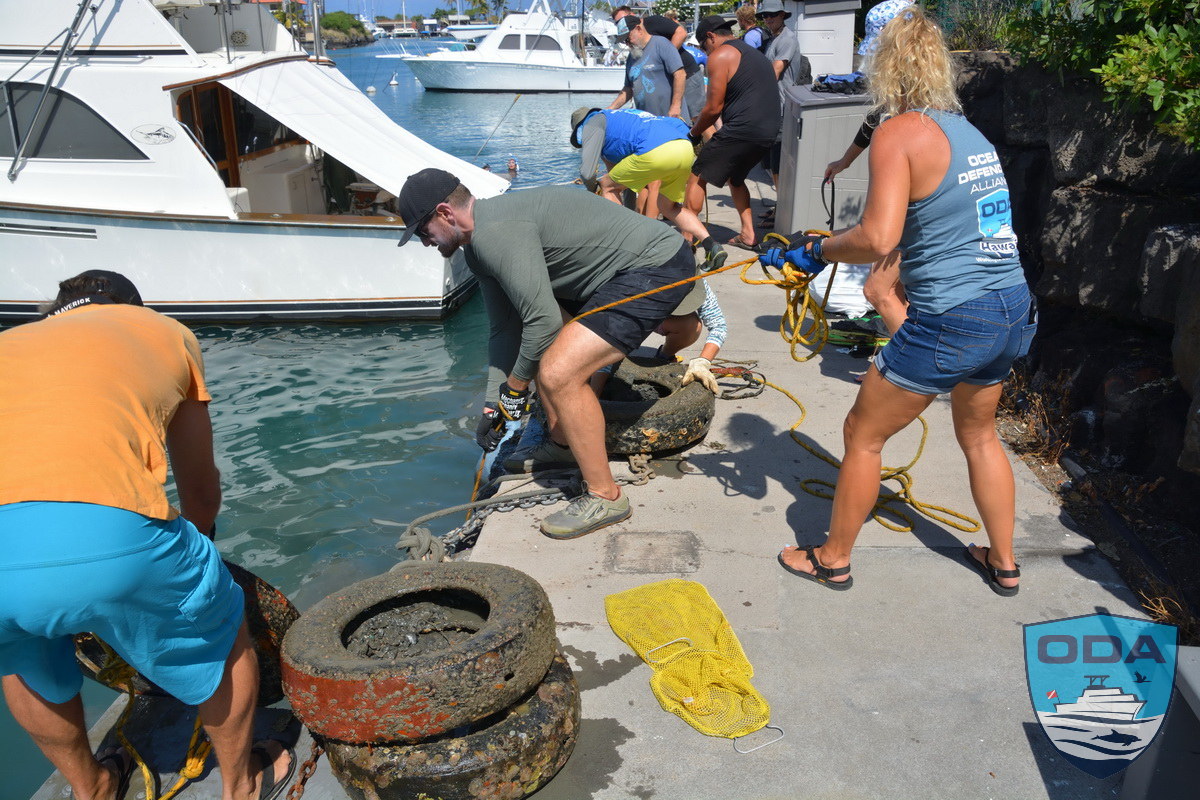 When I surveyed the site the day before, I saw maybe two dozen tires, and thought this wasn’t going to take very long.  And I told the team just that during my briefing… HA!  Never again will I make any such claims at clairvoyance.

Jeff Milisen was one of the divers, and he told me that he saw piles of tires that were stacked on top of each other.  He tied them off to the haul-out lines that Mark England and others were straining to pull up.  As soon as Jeff went down again, in the same exact spot, he saw a thick carpet that was covering more tires.  What the heck?!?! 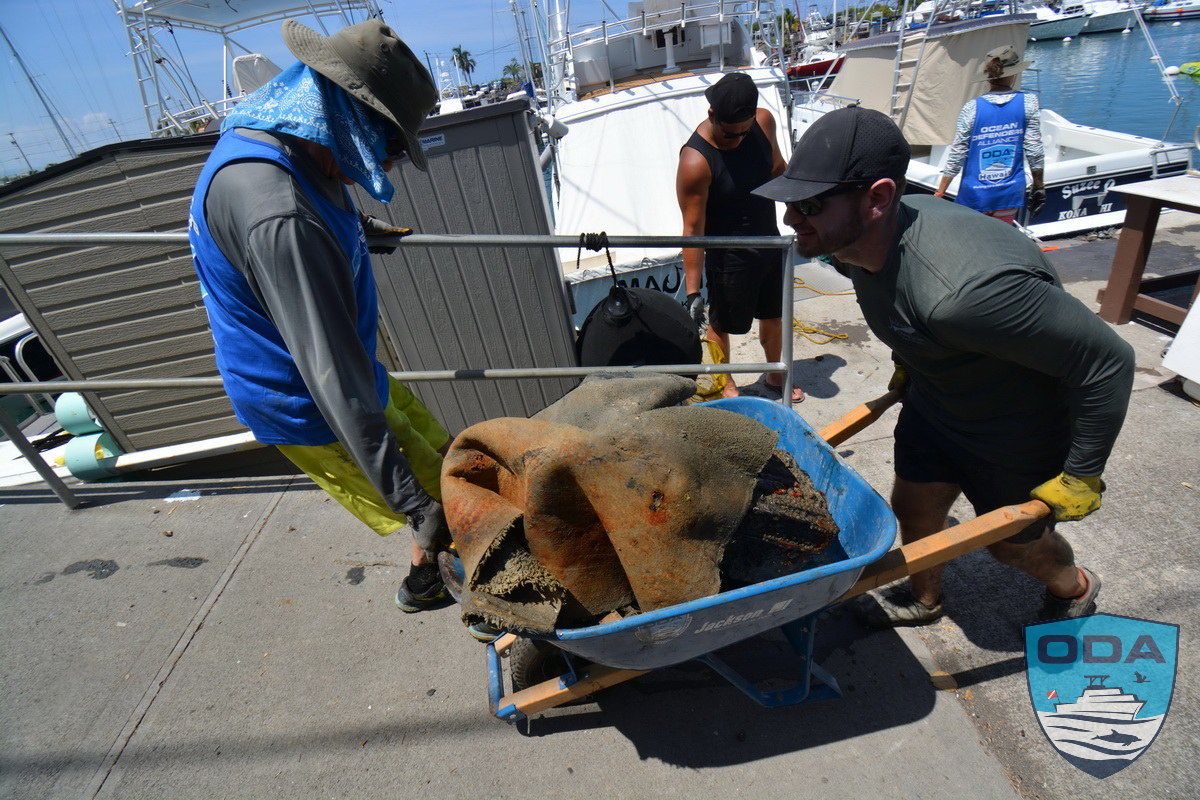 I hope it doesn’t sound like I am repeating myself, but on average, each tire is made up of about 200 different chemicals.  When those tires sit in the water the chemicals leach out and into the water over time, no doubt doing irreparable harm to all the animals that call our oceans home.  Altering the chemical composition of the same waters the whales, dolphins, turtles, fish, and invertebrates live and breathe in.  Then humans in turn, eat those same fish.  Do you really think we won’t suffer from the same maladies all those animals are being subjected to? 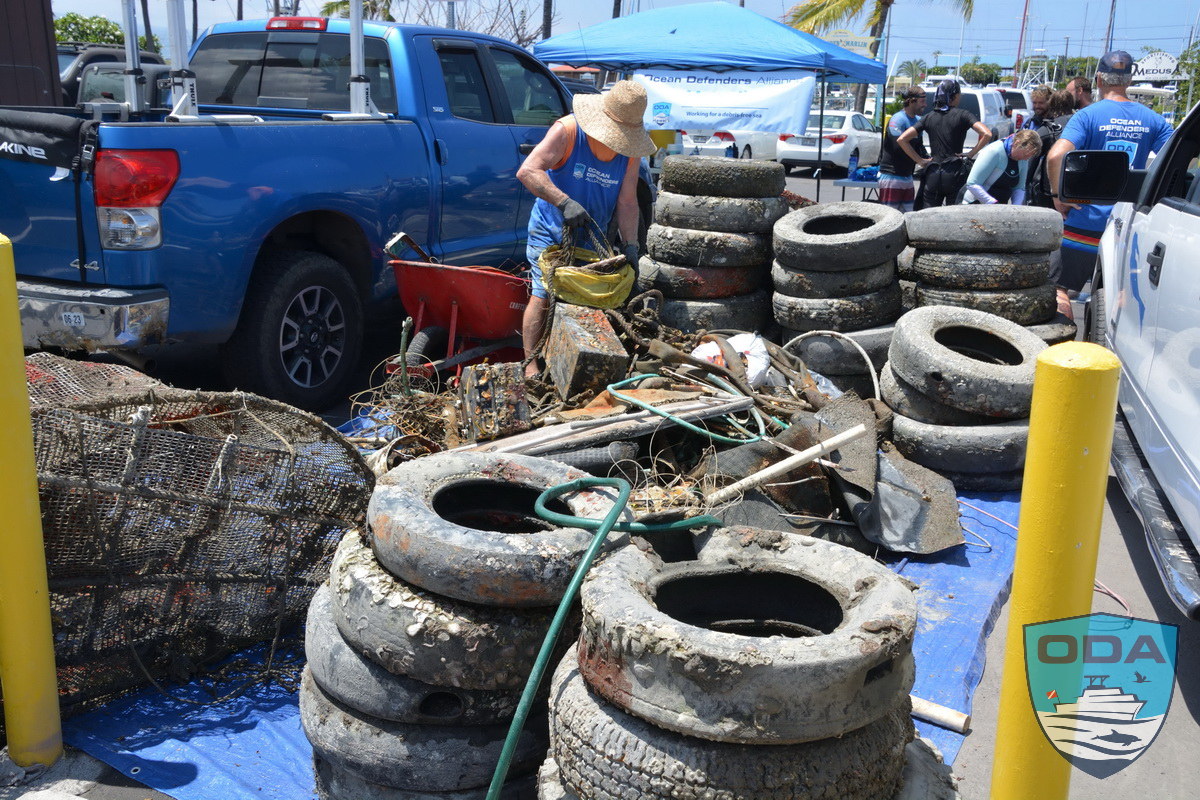 I know this is just one slice of ocean in a vast worldwide “pool.”  But if we don’t stop abusing our ocean habitats, we can’t expect to walk away with a clean bill of health.

Here's the dedicated group, celebrating this effort and their "Catch of the Day"! 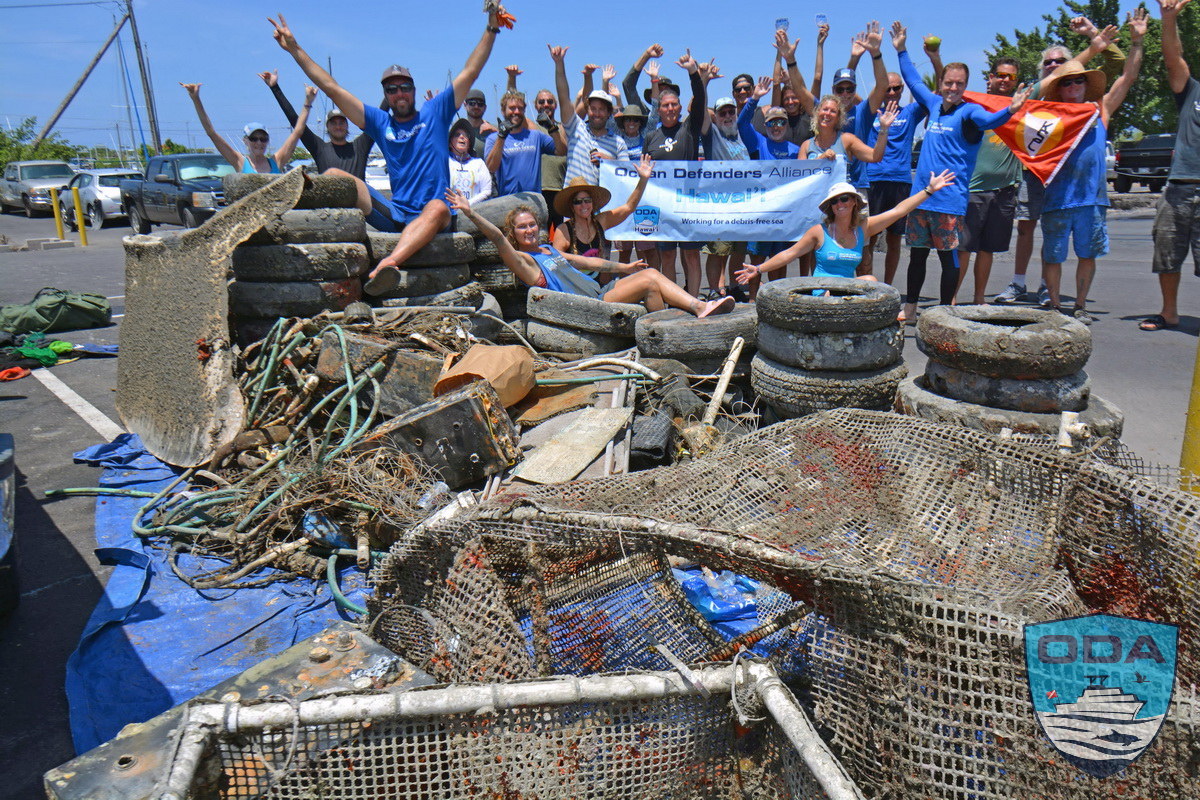 So please, do what you can. For example, you can minimize your consumption of all fish products, including eating fish, but also any fish products.  Also, if you see someone willfully polluting our waters, report it to the local authority.  Take pictures and write down license plate numbers.  Note the time and place it happened.  You don’t need to directly confront the abuser, just keep notes and share with the proper authorities.

There are a lot of ways to make our waters safer and more hospitable to our friends in the oceans.  We just need to raise our voices to let people know what’s happening to our oceans and the opportunities (like this one) to take positive action.

As you can see in this picture, there are a LOT of people who want to leave this planet a better place for having the privilege to get to spend time on and under the water.  That 5,050 pounds of marine debris looks like proof to me… 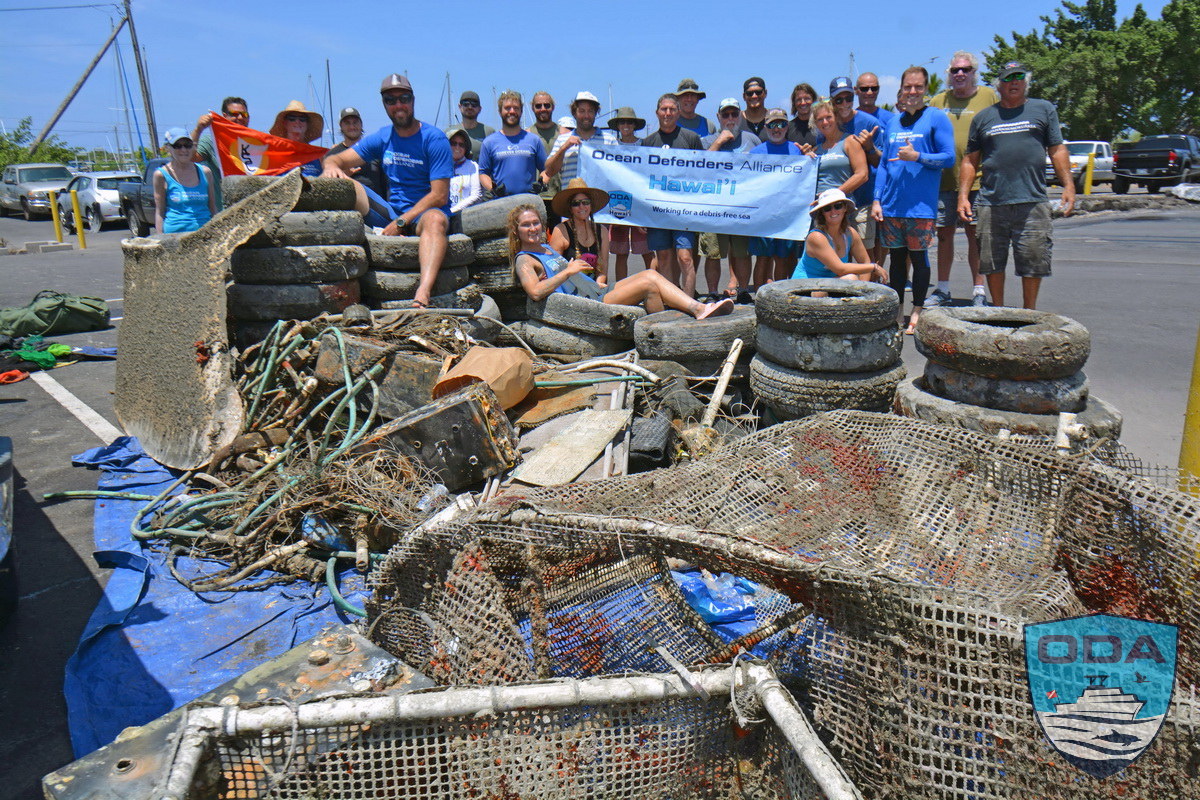 To everyone who participated in these cleanups over the last four years-- including our ODA donors who are behind the scenes making everything possible: JOB WELL DONE! Mahalo to all!