One of our longtime and dedicated volunteers, Karla Reinhardt, organized another cleanup of a mile-long stretch of a water channel in Fullerton, California. 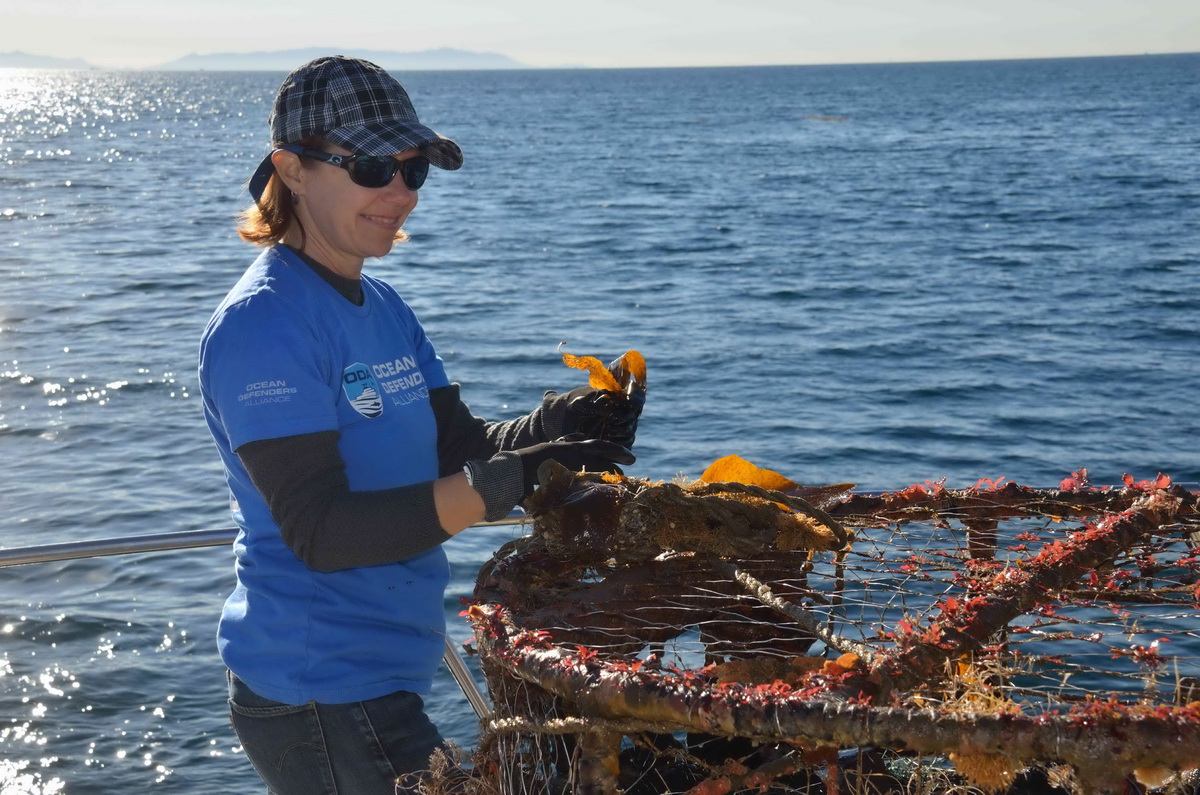 Before beginning her work with the Fullerton Channel, Karla worked as a deckhand on many debris-removal outings. Here she is with abandoned lobster traps that she and the boat crew retrieved!

In January 2018, she also led the effort for Ocean Defender Alliance (ODA) to adopt this channel so that we can work continually to keep it clean. 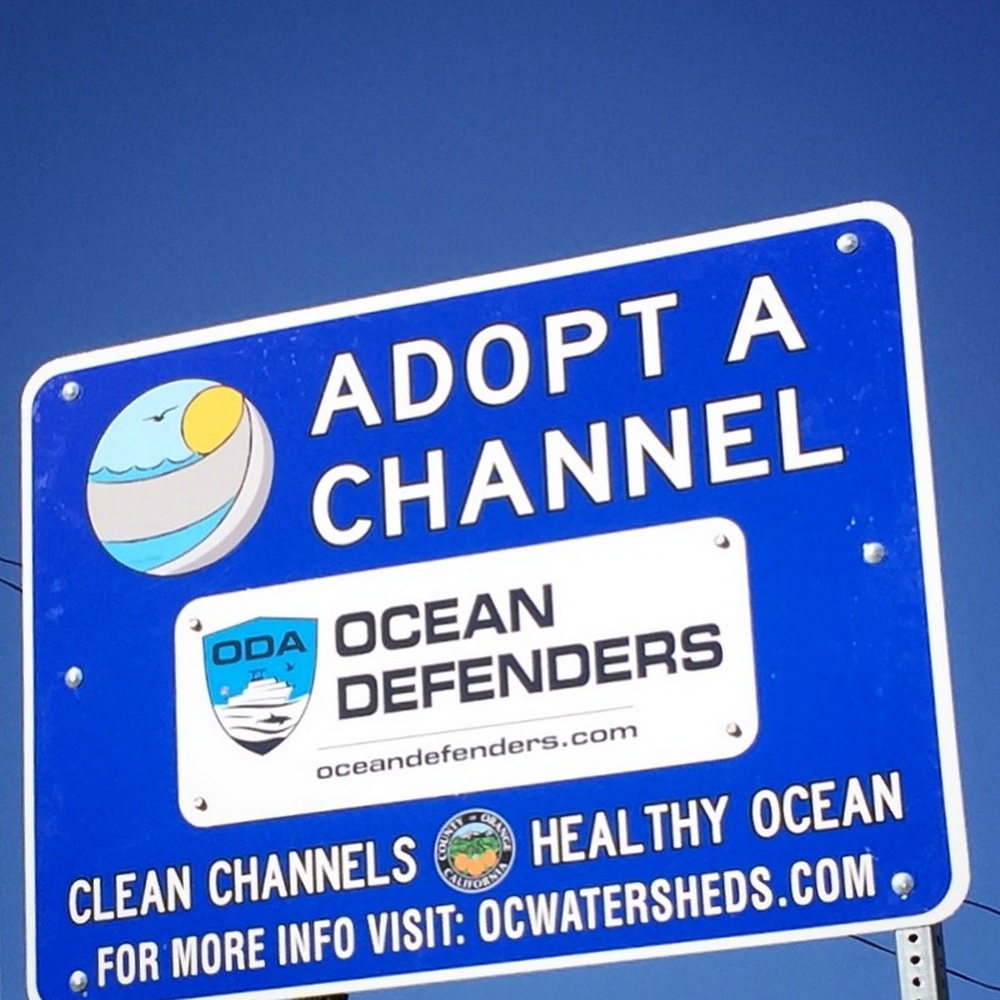 Fullerton isn’t exactly close to the ocean. It’s about 20 miles inland, but what comes down this channel eventually gets to the ocean, so it greatly affects our coastal waters! 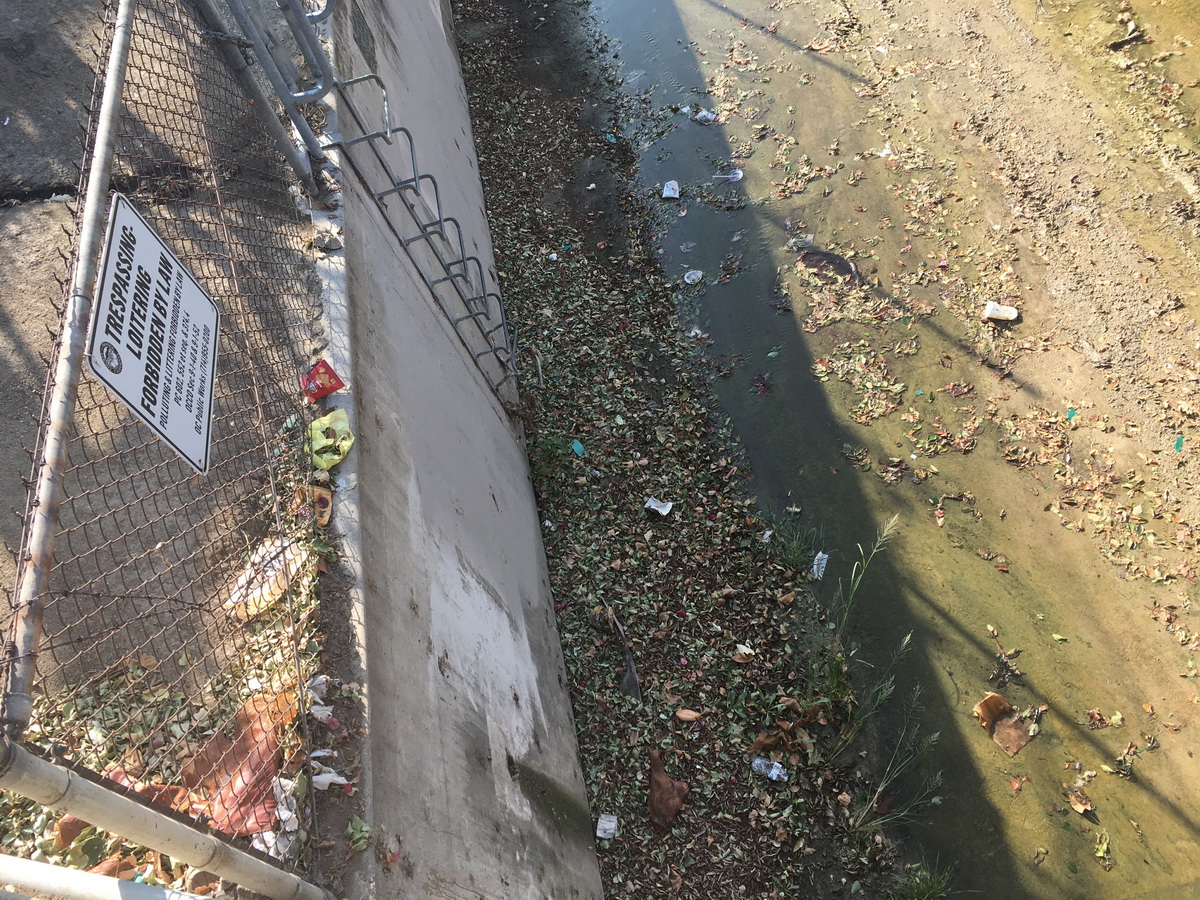 If Karla and her crew had not removed the debris from the channel for almost two years now, it would have all ended up in the ocean.

On this outing they had a diverse crew with a wide range of ages! Here is a quick summary from a 12-year-old Ava and 9-year-old Zoe:

On October 27, 2019, my sister and I volunteered to help clean up a channel in Fullerton. There was a lot of trash you wouldn’t think would be in there. This includes cigarettes, a hub cap, a glass bottle, plastic cups, metal cans, food bags, and even a mop pad. After we cleaned up the channel, we felt like we helped the ocean and the animals. We made a difference and prevented a lot of trash from ending up in the ocean. We hope we can continue helping and making a difference. 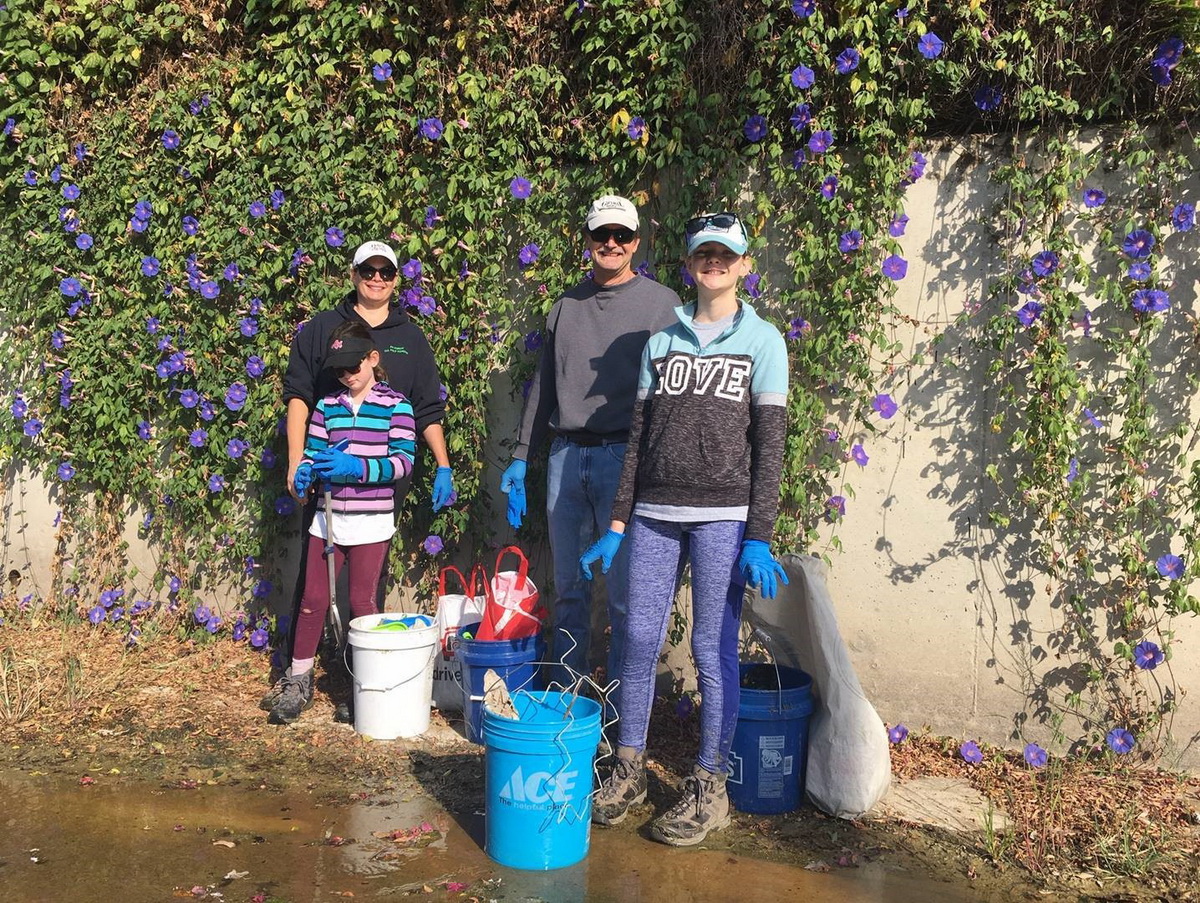 Please join ODA in celebrating this caring young lady and her sister! We’re thankful when the younger folks see the need for their involvement and jump in with us. 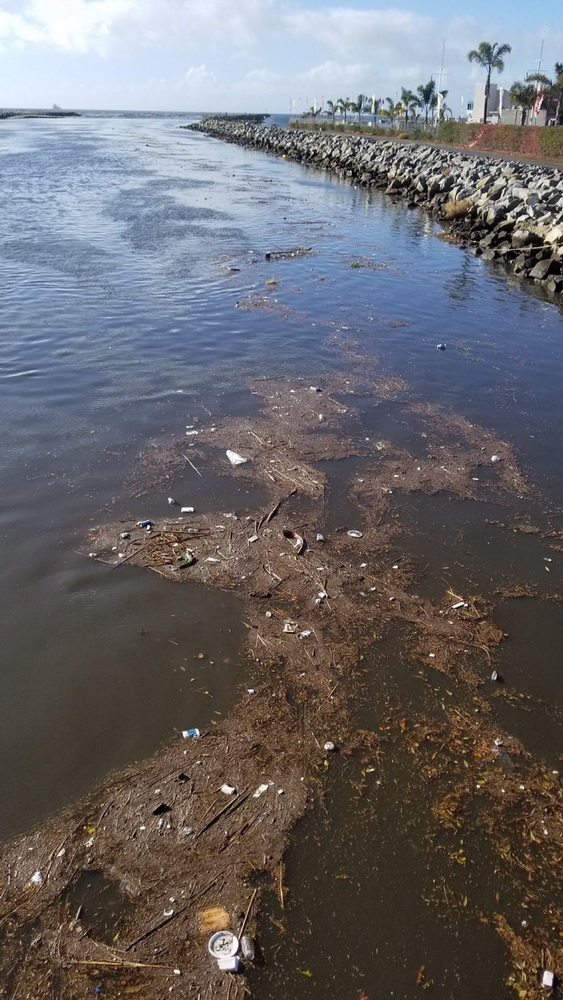 What is a Flood-Control Channel?

You might be interested to know that ODA’s adopted channel segment is part of the Brea Creek Channel near downtown Fullerton.

This flood control channel is designed to send storm water and street runoff into Coyote Creek, then into the San Gabriel River, and ultimately into Alamitos Bay. Unfortunately, and especially after a major rain, this water carries street litter and debris to the ocean.

You can see in the photo to the right, trash heading to Alamitos Bay in Long Beach (see other photo in the gallery showing Alamitos Bay with this trash on it).

Catch of the Day

On this day, Karla and the cleanup crew got five buckets and two trash bags of stuff, barely a month after their last cleanup. 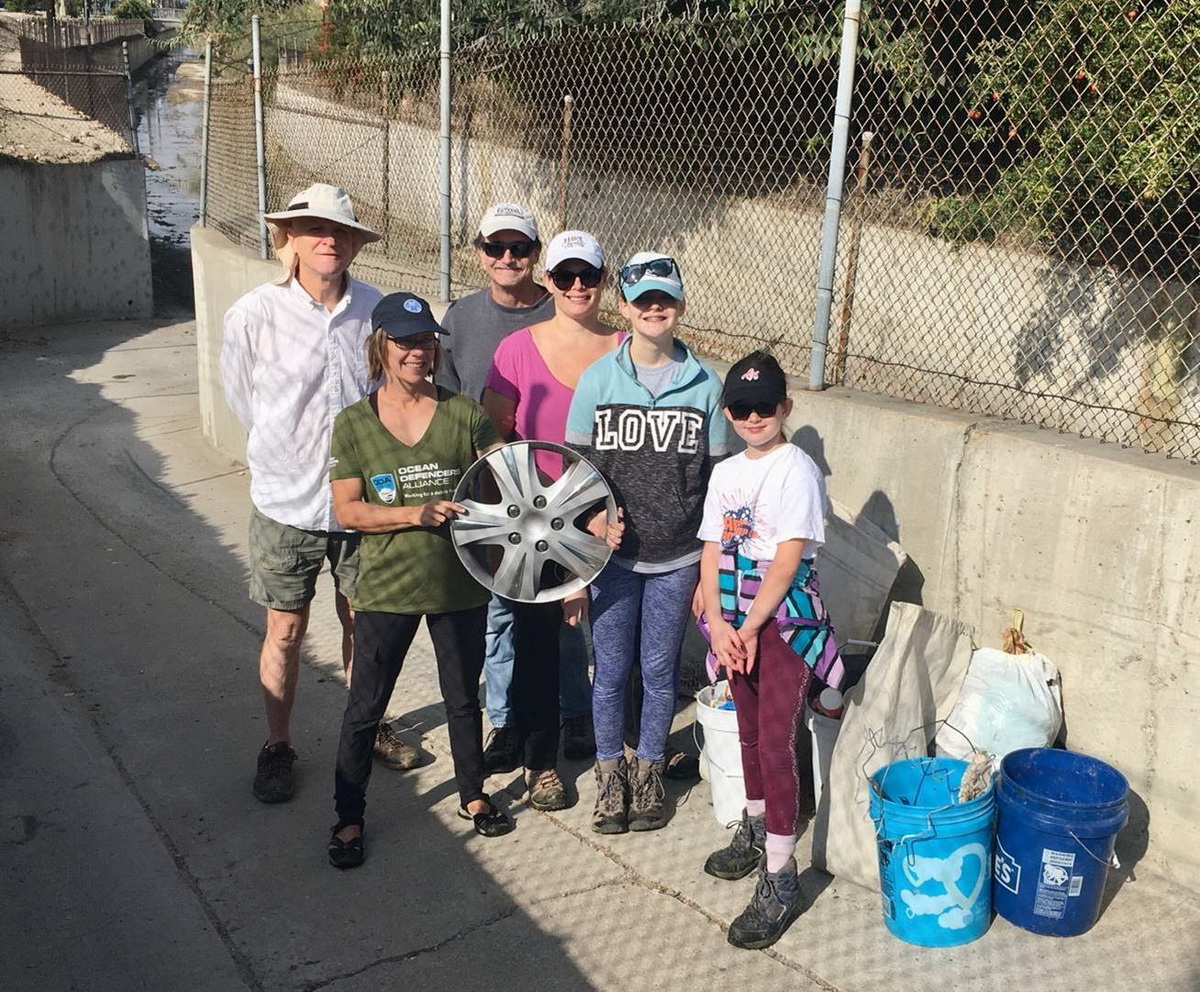 If you live in Southern California and would like to help Karla along with other ODA volunteers, please drop us a line at .