When it rains, it pours…plastic!

Here in California, we’re finally getting a sense of relief from a year’s long drought.  It’s been raining on and off now for a couple of weeks, and the land is loving it.

The oceans, not so much.  With the rainwater heading to the ocean all the debris from our consumer society catches a ride along with the water.  And the majority of it ends up in the storm drains, canals, streams, and eventually the ocean.

We were scheduled to take college students and divers out to remove some abandoned traps on Anacapa Island, but had to cancel due to the weather.

So instead, on Sunday, December 4th, longtime volunteer Kim Cardenas and I decided to spend several hours on Plastic Patrol in the waters of Channel Islands Harbor, where our boat Mr. Barker’s LegaSea is located. 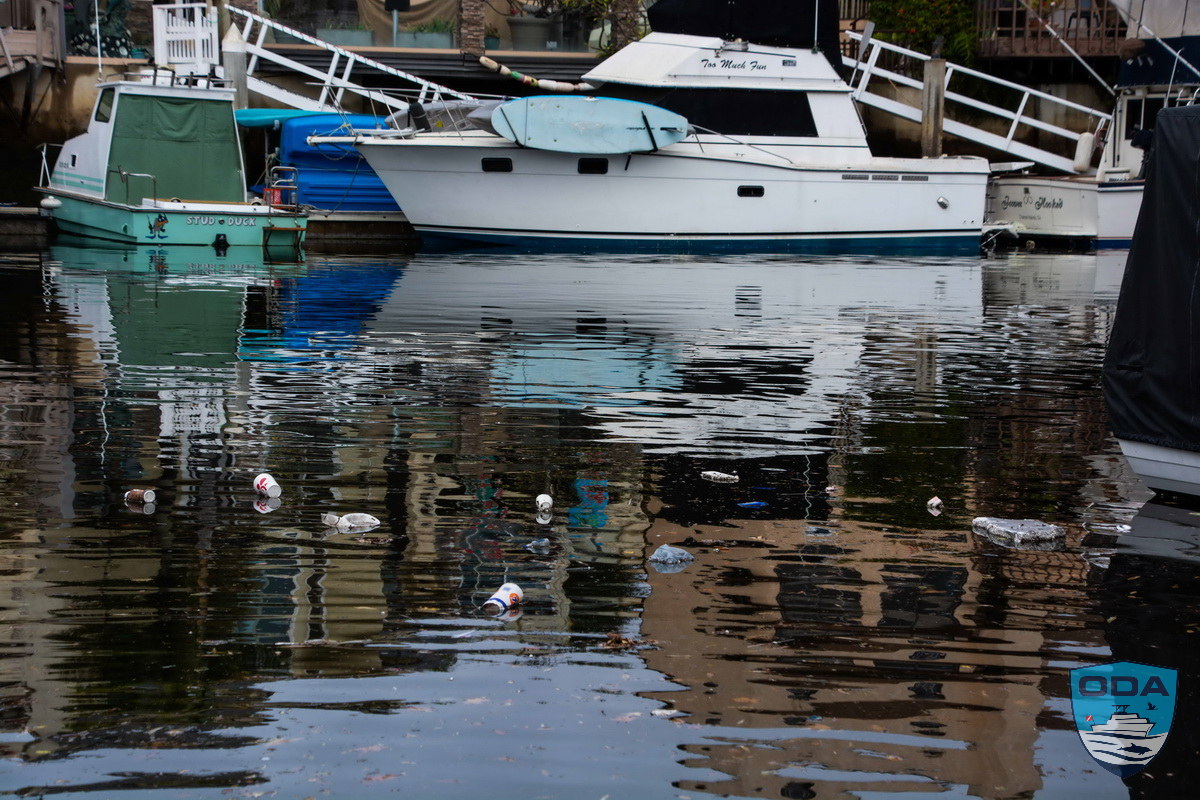 It was still drizzling when we lowered the RIB (rigid inflatable boat) off the deck of the LegaSea.  Knowing that we’d be finding floating plastics in the harbor, we wanted to use the RIB because it’s easier to maneuver in the tight places where the debris accumulates.

We first headed to the fuel dock to get some gas, then as we were taking off Kim asked if we could go to a spot where the sea lions have been seen sunning themselves on the small patch of sand near the mouth of the harbor.

So, we headed that way and saw that they weren’t in the normal spot where we’d seen them before.  Then Kim heard raucous noises from a stretch of beach where there are normally families hanging out with their kids.  This stretch of beach is always crammed with tents and picnic baskets.  The area is great for allowing kids to get in the water because it’s shallow and there are no waves, because it’s inside the harbor.

But due to the rains, there were no people there.  What we did see was just astounding.  There were a couple hundred sea lions lounging on the sand! 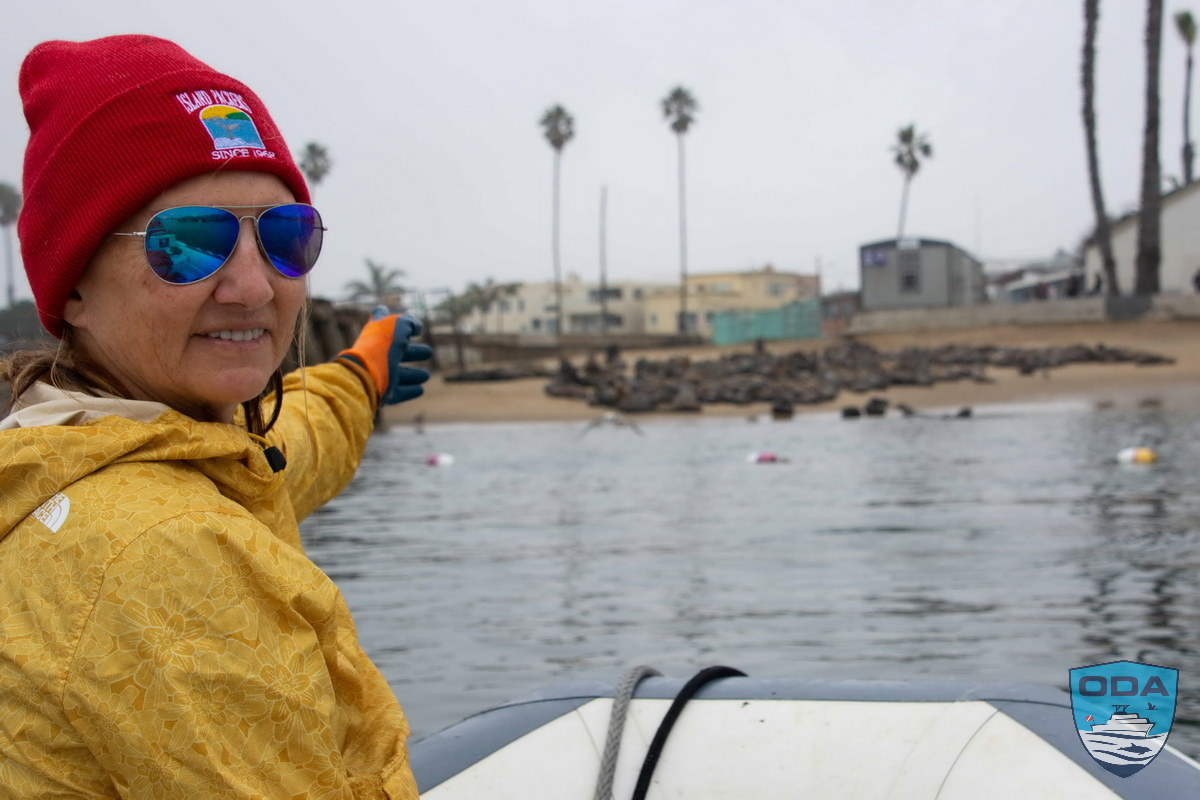 It was great to see, and we stayed for a while just to enjoy the sight and sounds of so many happy sea lions.  As we were pulling away Kim and I were discussing how quickly animals will populate an area if humans just gave them space.  Something that is in short supply in densely populated southern California… 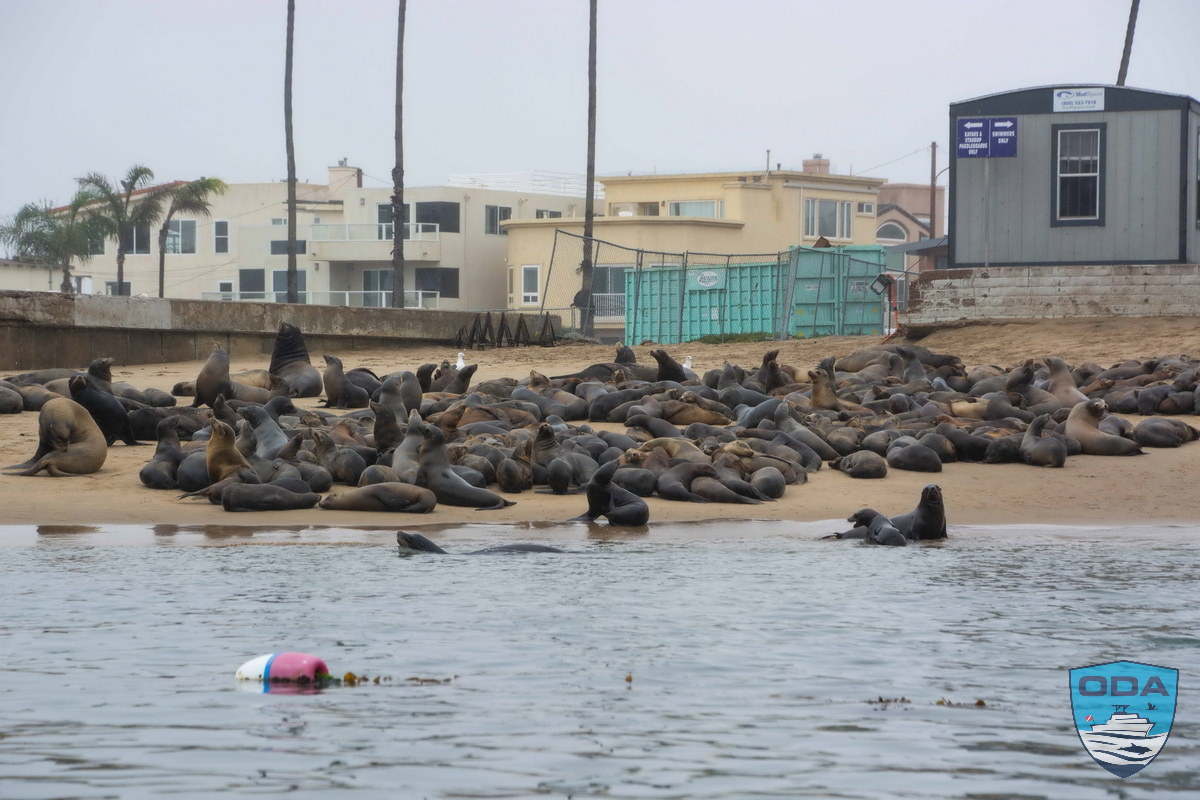 We then motored around the harbor looking for any plastic items we could find.  It was overcast and had an eerie feel to it, as there were no boats out and about, and for a long time we didn’t even see any people.  What we did see was small pockets of floating trash along the boat slips. 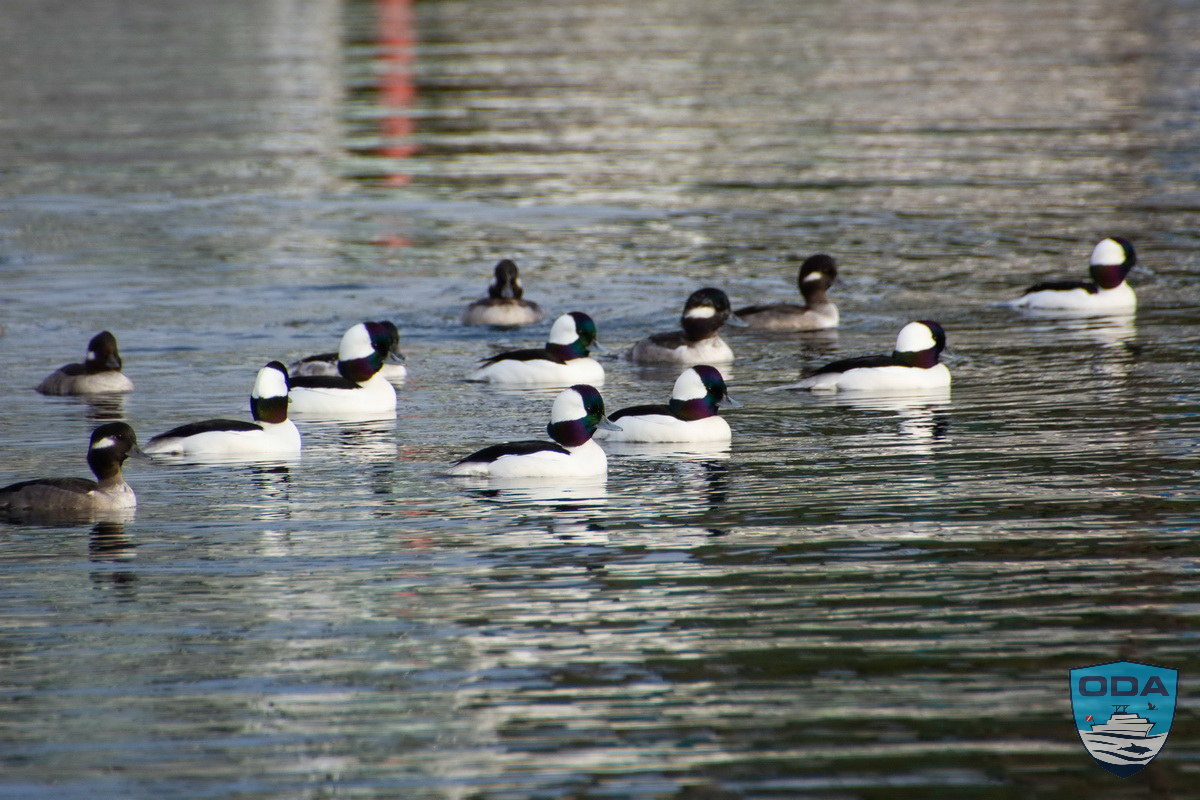 They’re a regal-looking bird, not very big.  In fact, not even half the size of a mallard.  They are one of the smallest ducks in north America, and can be found along the west and east coasts of the US.  They breed in Alaska and Canada in the summer and then head south to calmer waters in the winter.

They reside in ponds and lakes, but also in harbors and estuaries along the coasts.  They are not endangered but deserve clean water like the rest of us!

So, Kim and I spent five hours doing what we could to remove anything we could find.  What we found was just sad.  Plastic food bags, bottles, polystyrene (Styrofoam) in many forms, Christmas ornaments, cigarette packaging, and of course, cigarette butts.  Ewe! 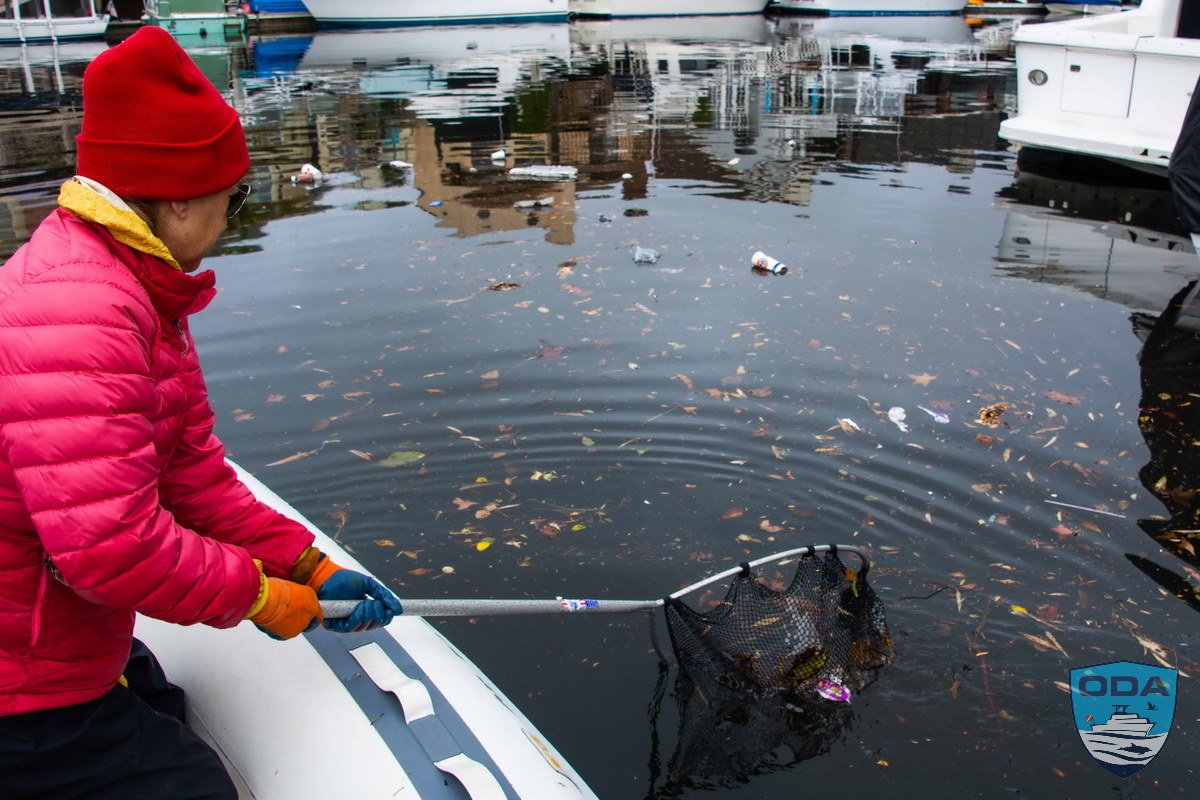 One thing that was interesting is that we hardly found ANY plastic straws.  In years past we would find hundreds of them.  But obviously the ban on straws is having an immediate impact.  Now if we can only do the same with all these single use plastic items, we’d have a much nicer environment, and everyone would benefit. 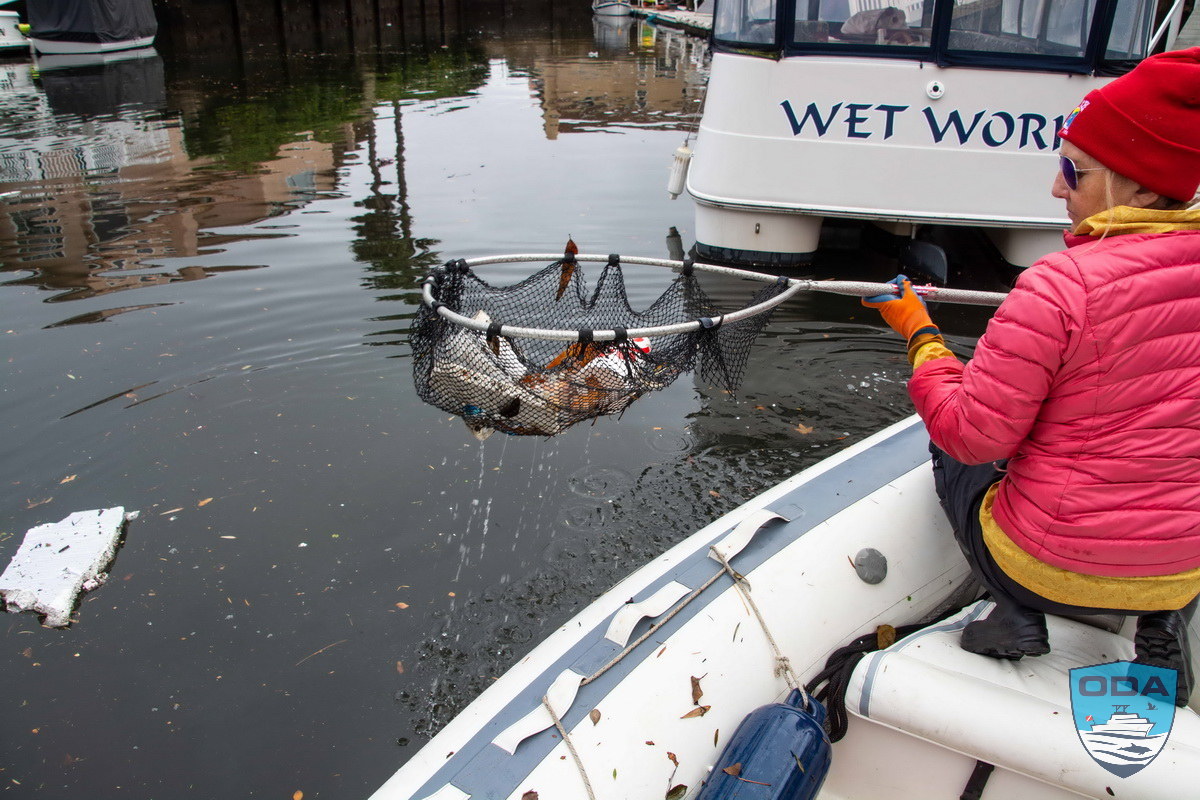 Just today I read that the City of Los Angeles banned the use of polystyrene!  That means no more Styrofoam food containers or drinking cups.  Sure would be great to see that get traction throughout the country.

You can read about it here:

We finished up as it was getting dark, around 4:30, and ended up removing about 60 pounds of plastic. 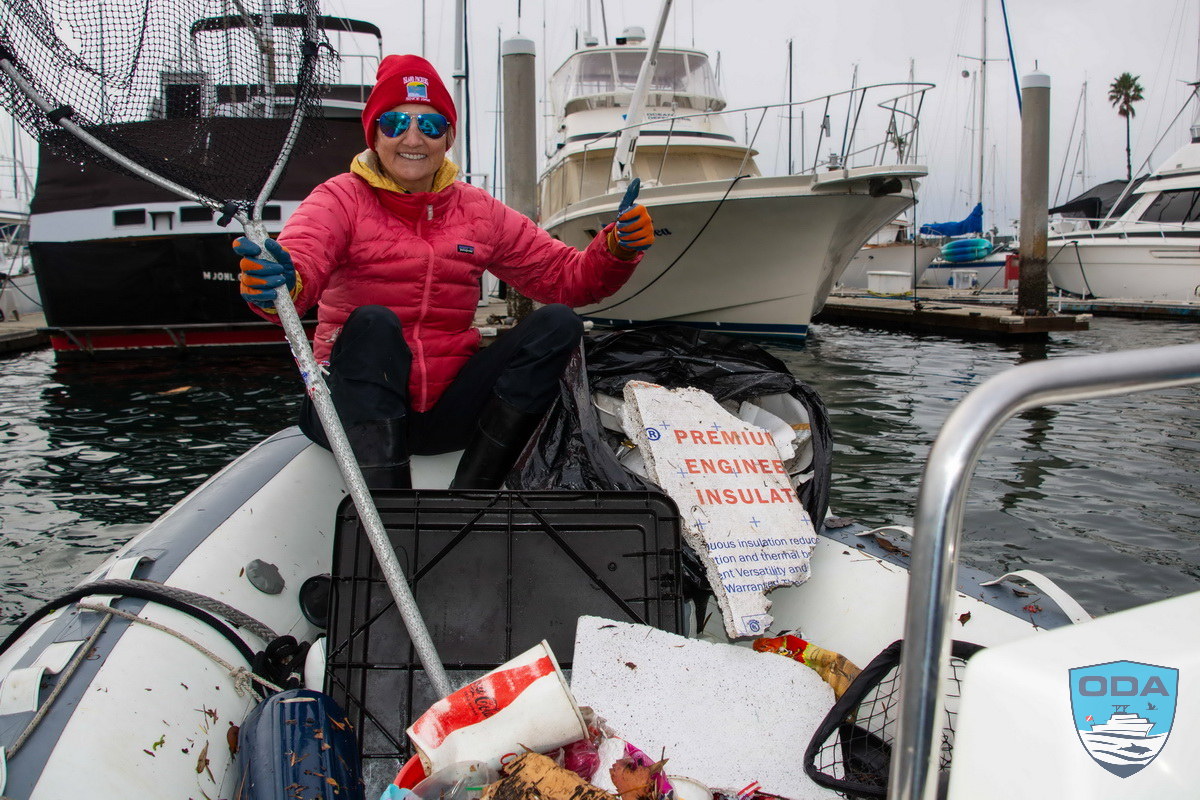 I encourage you to do the same from wherever you are. Even if you live inland, light-weight trash always makes its way to waterways and eventually out to bigger bodies of water.  Helping the environment is a fun way to spend the day and to know you’re helping wildlife and their ecosystems makes it all worthwhile.