Rebreathers Breathe Life into Our Ocean 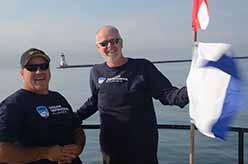 Rebreather divers Danny Graham
and Mike Wynd On Saturday, July 27th, we untied our boat the Clearwater from her slip and headed out with our all-volunteer crew to locate and remove some net that had gotten caught on a man-made structure.  This site is just off San Pedro, and sits in 100 feet of water about a half-mile from Point Fermin.

Our longtime volunteer videographer Walter Marti told me about these nets approximately three months ago.  Thanks to Phil Garner who gave me the GPS coordinates, I was able to drop the anchor right on the site.  The seas were nice and flat, with a slight current blowing, but nothing serious to worry

The divers on this outing were Mike Wynd and Danny Graham.  Jeff Connor and Jim Lieber rounded out the team by providing deck support.  Mike has been diving with us for over four years now, and his relaxed demeanor and dive skills are always welcome on our boat.  Danny came along as his dive partner, and it was his first time going out with us.  Danny was a commercial urchin diver in years past, and has logged thousands of hours underwater. 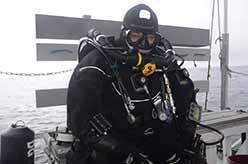 They were both using re-breather dive systems.  These systems allow them to stay down for extended periods of time.  Three hours is not uncommon!  Their dive gear is expensive, cumbersome, and a bit intimidating for a diver who only has experience with one tank on his back.  Take a look at all the gear that Danny and Mike wear! 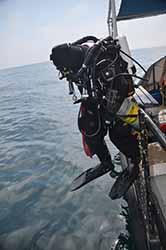 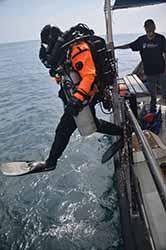 Conditions were as good underwater as they were topside.  Visibility was a clear 30 feet.  Mike and Danny located a net quickly and got right to work on cutting it loose after assessing the situation and making sure there were no life forms on it that would be impacted by them removing it.  Sometimes there are large anemones that have attached themselves to these nets. If they have colonized a net, we cut that section loose, leave it alone and remove the rest. 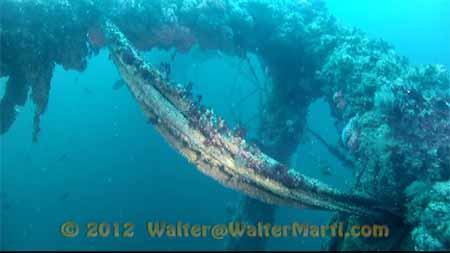 After about an hour of bottom time, they surfaced with a lift bag that was riding low in the water.  That indicated to me that there was a substantial amount of weight hanging from it.  As soon as we got the guys aboard, Jim and Jeff started hauling in the net.  Turns out it was a nice haul.  It was a squid net and weighed about 200 pounds.

This net was hanging from the structure and just waving back and forth with the ebb and flow of the currents.  This situation allows for the net to catch unwitting fish, crabs, or sea lions to become entrapped.  These nets also constantly scour any surface that it comes into contact with and will kill any life forms that could have grown there. 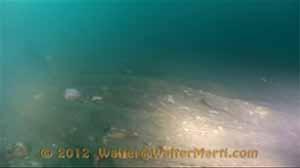 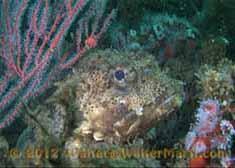 Jim, Jeff, and I checked the net for any critters that may have come up with the net, and only found a few shrimp, scallops, clams and small anemones, which we placed back in the water. 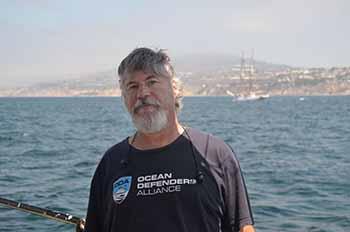 Volunteer, deck crew, Jeff-ConnorIt was another great day on and under the water--made all the better because we removed so much netting.  It was nice to have Mike aboard again!  Danny turned out to be not only a very experienced diver but has other invaluable skills that he is willing to use to help us on further projects.  Great to have you come out with us, Danny!

Jeff and Jim, you guys are our heart and soul, willing to take on whatever job needs to be done in order to obtain our goals.  Thanks also to our on-shore volunteers.  We would not be effective at all without your efforts-we have a fantastic team of ocean defenders

This is THE heart of the good diving season.  With continued support from our donors and volunteers, we'll have many more successful days like this in the next couple of months. 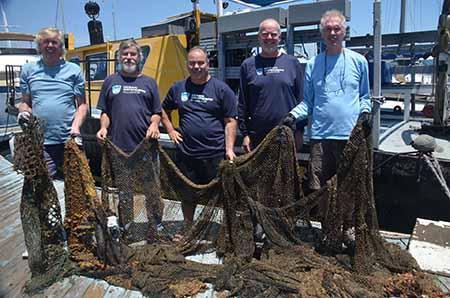 Thanks to all of you who contribute in one way or another!
Kurt