Take a moment to enjoy this little video from our wonderful longtime videographer volunteer Walter Marti!

With the end of the lobster season six weeks behind us, we headed out to Palos Verdes under a sunless sky on Sunday, April 28th to remove abandoned traps which I knew were likely left behind by fishermen and still ensnaring animals. 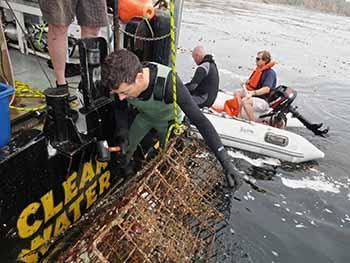 Steve, Andy, and Shingo brought along some underwater scooters to help them cover more ground in our search for abandoned lobster traps.  That bulky equipment coupled with all the camera gear and many volunteers, made the boat feel a lot smaller than her 40-foot length.

We sailed to an area off Point Vicente that I had been observing over this the past winter and had seen lots of trap markers at the surface. I planned this excursion based on the assumption that there would be several lobster traps that had their marker lines cut.  The guys weren't down more that 20 minutes when we started seeing the lift bags floating on the surface.  Within a short time, all of the lift bags had been deployed and were ready for us to retrieve.

Jim and Roger quickly jumped into the Zodiac.  Their job is to attach one end of a long line to the lift bag, motor back to the boat, and hand me the other end of the line so we can start pulling the lift bag onto the boat.  All went well until the engine died on the Zodiac.  Roger did his best to try to get it to work, but to no avail.  As he and Jim struggled to get it going the lift bags were being pushed by the waves, ever closer to the shore, and into the thick kelp beds.

With the Zodiac engine not cooperating, the guys had to resort to brut force-and  they started to paddle.  This was no easy task given that so much time had elapsed that all of the bags were now entangled in the kelp beds… Ugh.

We soon got all 7 divers back onboard, and started the arduous task of getting the Clearwater as close as possible to the bags, attaching a line to them, and then pull the entire load to the boat.  Because the bags were now spread out all over the place, with something like a half-mile between them, it took us about 90 minutes to finally get all the traps on to our rear deck.  But get them we did-3 lobster traps in all. 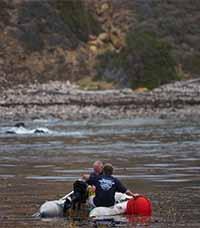 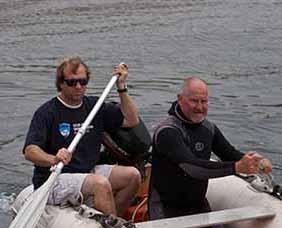 When we got them aboard, we started removing all the critters that were in them, mostly starfish, whelks, and urchins. We did find and release several baby octopi as well!

We had to cancel our scheduled second dive because the retrieval had taken too long due to the broken down engine.  If anyone has a small (15-25 horse) 4-stroke engine they can donate, hey, I know a bunch of divers and ocean animals who would be extremely grateful to benefit from it! 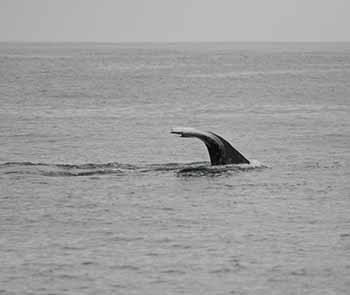 Even though the skies had been dark and gloomy all day, as we headed home at 2:30 pm, Dudley and I were talking about the day when he noticed that the sun was finally peeking out from behind the clouds.  Just when he said those words two whales surfaced about 200 feet from us!  They were headed north, to Alaska.  We were headed the opposite way, but being the whale huggers that we are, we did a 180 turn, and cruised along with them for about the next 10 minutes…at a safe and legal distance, of course.

It was a great reminder of the obstacles that those same whales will face on their 7,000-mile journey north.  We felt a great sense of relief that at least they won't have to dodge the traps' lines that we had just removed.  On average, there are 20 whale entanglements in fishing gear in Southern California every year. 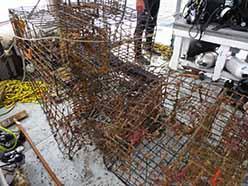 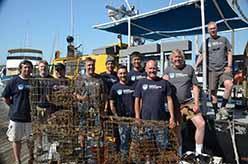 Thanks to our incredible volunteers, and your donations, these magnificent whales can breathe a little easier when they migrate through our backyard.