It was an absolutely gorgeous day on the water when we motored out from San Pedro on Mr. Barker's LegaSea and headed along the coast of Palos Verdes.

Flat seas, topside visibility was so clear it looked like one could walk to Catalina.

Veteran Crew and One New 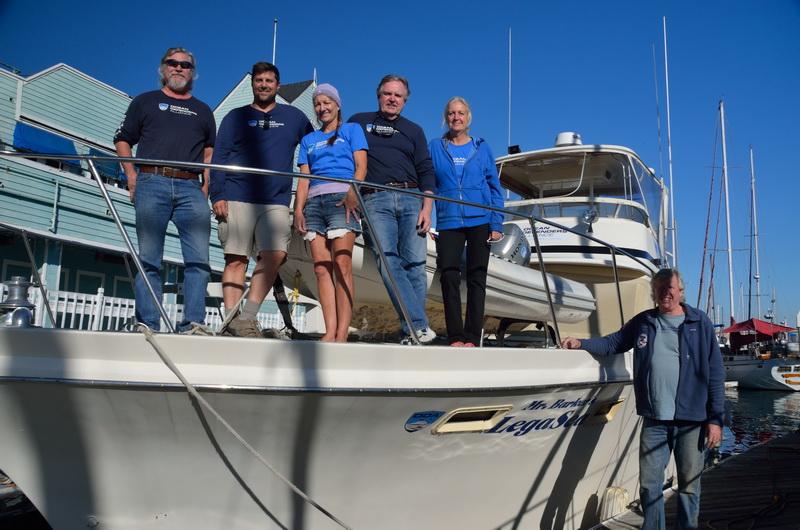 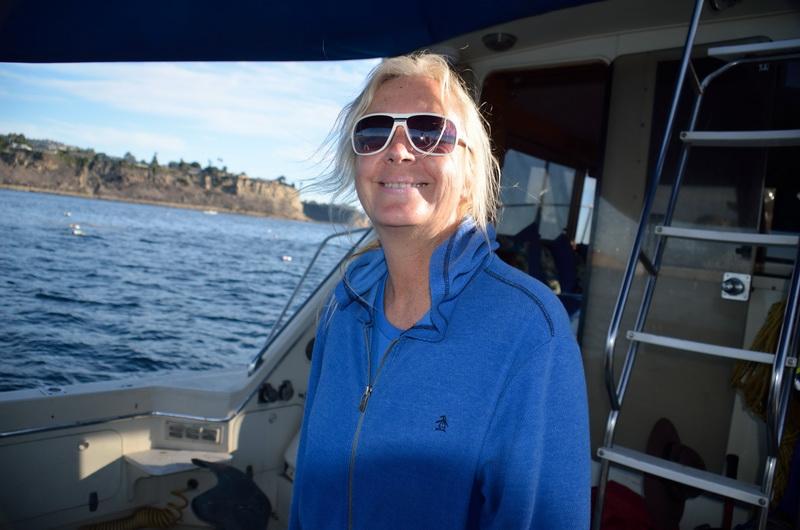 We also had Cindy Langlois helping out on deck.  This was her first time coming out with us.  Welcome aboard, Cindy!

On our way out to our first dive site we patrolled through Point Vicente, which is a Marine Protected Area (MPA).  There is no fishing allowed here, but as usual, we found two boats in there. 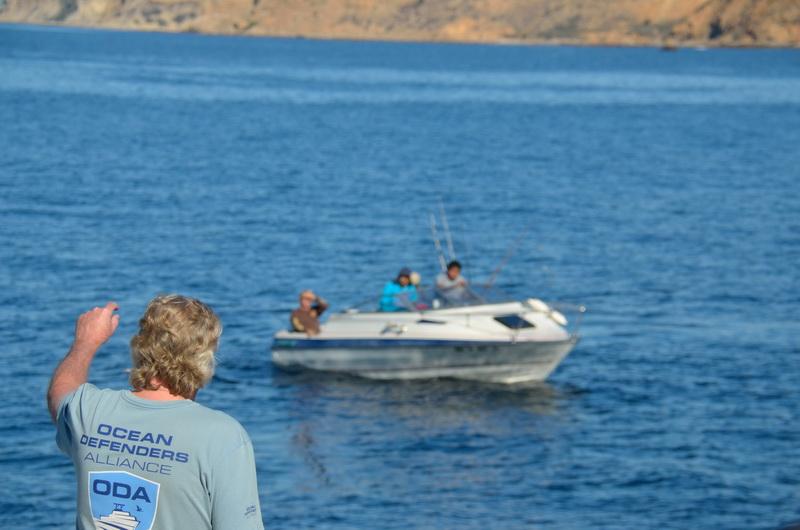 Each boat had four or five poles in the water.  So we motored up to them and politely told them about the rules regarding MPAs.  Each boat captain professed to not know it was an MPA, and quickly left when I told them.

We continued on and anchored at a site called Hawthorne Reef.  It's about a half mile from shore and lies in 80 feet of water.  We have been here several times before, and on our last dives here we had to leave two traps behind because our boat was too full.

Kim and Jeff (Larsen) teamed up and headed west, while Jeff (Connor) and Al took off on their scooters and headed east.

Jeff and Al didn't get very far, about 20 feet from our anchor before they located a large anchor.  The anchor chain was still attached to it, but it was wrapped several times around a rock.  So they set about unwinding the chain and attached two lift bags to it only to see it rise a few feet and then stop.  Even though the bags were full of air, the chain was too heavy for them to lift it to the surface. 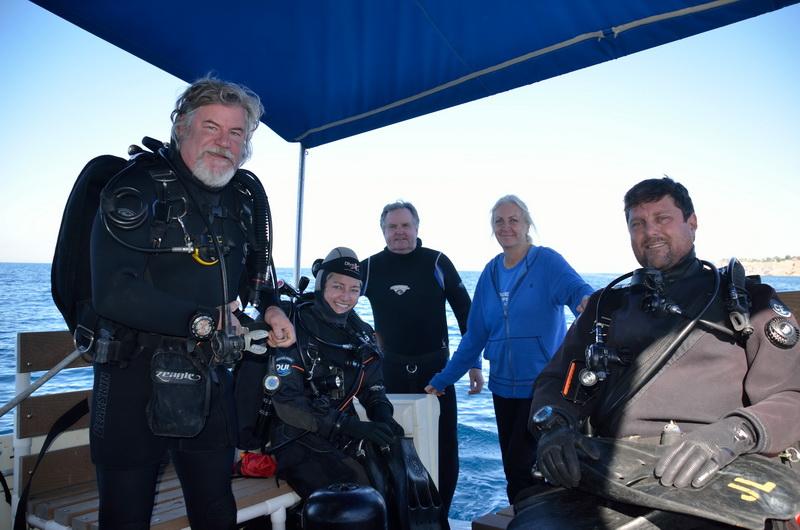 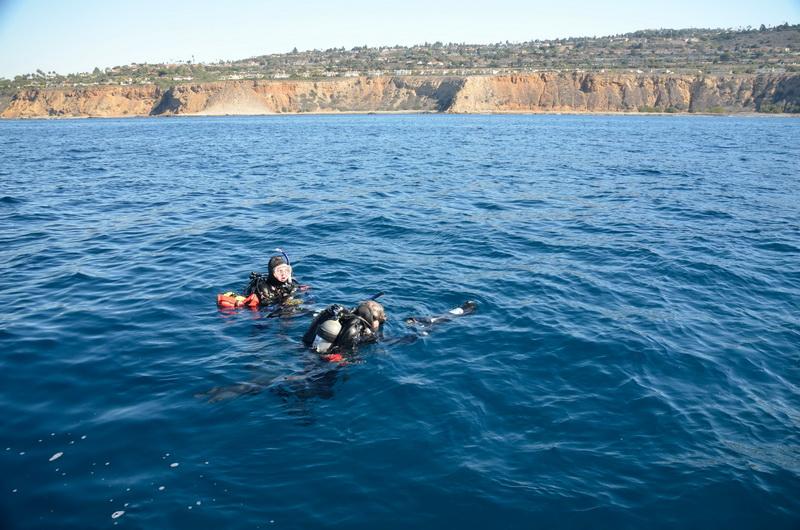 They next attached three lift bags to the anchor, and it did rise to the surface, but soon sank right back to the bottom.  Dang, this was turning out to be a VERY heavy anchor.

As soon as both dive teams returned to the boat, they took an hour surface interval (breathing break, for you non-divers) and all four of them headed down again to attach several more lift bags.  It took an incredible amount of effort to get the anchor and chain onboard, and I could see why we had to put so many lift bags on it, it probably weighed 350 pounds!

When we got everything secured on the boat, we headed further west to a site that I had seen from the air many years ago.  Chris Aultman used to take me out in a helicopter and we'd go up and down the coastline looking for trap buoys.

Knowing that 10-15% of the traps are lost every year, I marked on a map where we were seeing high concentrations of the traps.  We now regularly go back to those areas and remove abandoned traps.  Thank you, Chris: Your air reconnaissance work continues to pay off!

During one of those flights, we saw a really unusual sight: a straight line of trap buoys going from the shore all the way out to sea for what seemed like two miles.  It turns out that this area is the boundary between Palos Verdes and Santa Monica Bay.  There is no fishing for lobsters allowed in the bay, but there is in Palos Verdes.  So, the lobster fishermen line up their traps right at that boundary.

And oh my word, is it a quite a lineup.  From my perch in the wheel house, I saw a similar line-up of buoys. I counted over 150 traps.  Imagine what that must look like to a migrating whale.  Trap lines rising from the bottom to the surface, spaced 50 or less apart.  It must look like a curtain of trap line…and it functions as a curtain of danger to whales!

In the recent past, we typically were seeing 12-14 whale entanglements in a year along our coastline-and that's only the ones we know about.  This year we have already had 35, and counting... 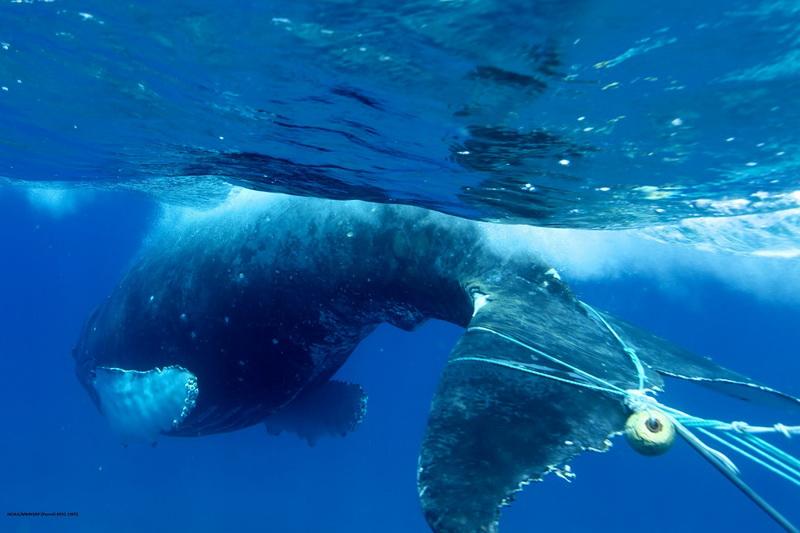 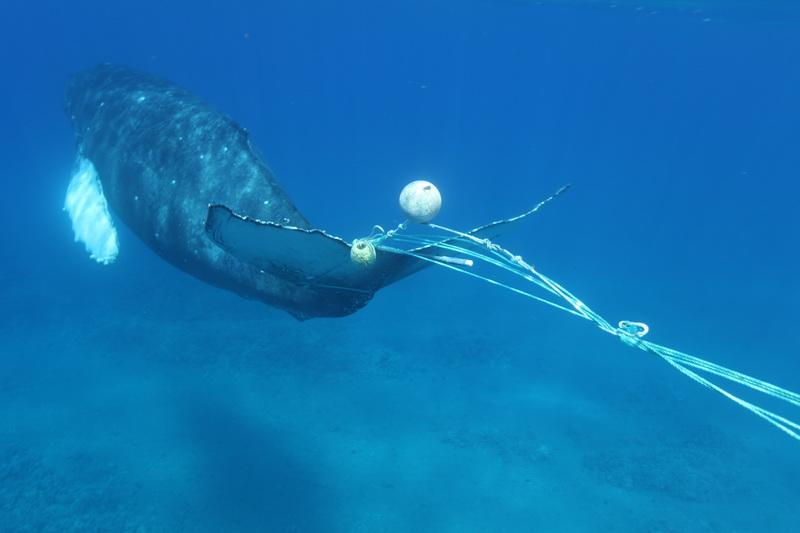 We anchored amongst all the traps while Kim and Jeff (Larsen), got into their dive gear and headed out with their scooters to see if there were any abandoned traps they could find.  And find they did.  They put lift bags on two of them and they got to the surface.  Unfortunately, one of them sank within a few minutes.  Must have been too heavy for the bag.  We'll go back to get it soon. 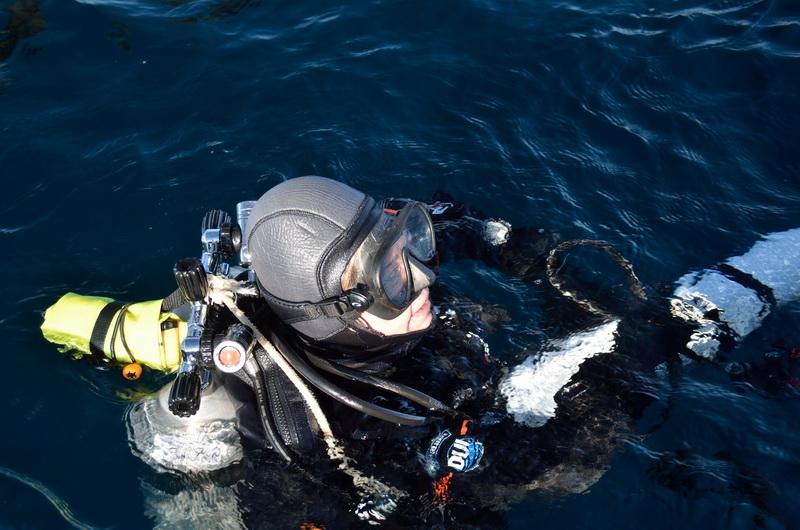 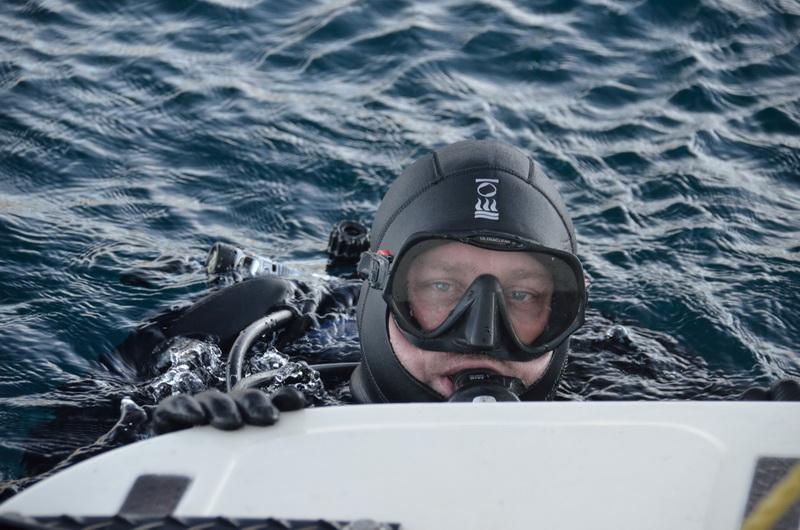 By this time it was 3 o'clock and we had to head home.  It was an exhausting day, but as always, very fulfilling.  It was excellent visibility underwater, at 40-50 feet, and the divers got to see some really cool critters, like a school of about 30 tuna that circled them a few times.

Even though the water is starting to cool down (it was 68 degrees), at this time of year it should be much cooler (60-62). Wewere out on the water for over eight hours, and saw no whales, no dolphins, only one or two sea lions, and hardly any birds (maybe 30).  This is directly related to the warm waters we've had all summer.  The animals have to go out further to sea, where the sardines, mackerel, and other forage fish go to find their food.

While we try to minimize the environmental damage caused by commercial fishing, we are fully aware that there are other factors that are altering our oceans as well.

Thanks to all our volunteers and supporters for helping ODA do our part by acting locally! YOU ARE the Alliance!

If you want to be part of this rewarding work, check out our Get Involved page. :)