Be sure to look at the photo gallery at the end of the article. We have tons of awesome shots to share with you!!!

Another day on the waters off Ventura reveals more ghost gear.

Departing from our boat slip in the Channel Islands Harbor on Sunday, August 8th, eleven ODA volunteers headed up the coast onboard our flagship vessel Mr. Barker’s LegaSea.  Our destination was a site that volunteer Rob Broesamle had told us about: Rincon Island.  Rob has seen many abandoned traps there on his recreational dives in the past and thought we might be able to locate and remove some of it. 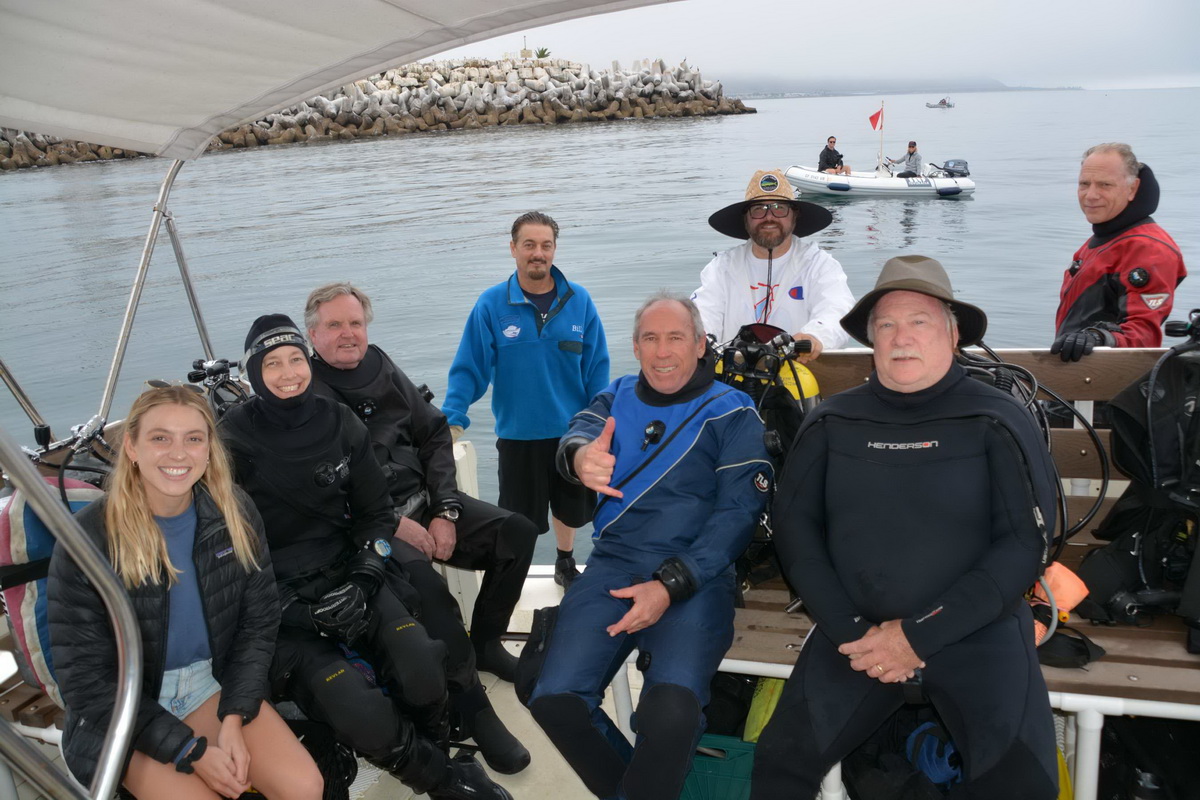 So off we headed.  Divers this day were: Erich Fertschneider, Al Laubenstein, Kendall Raines, Maureen Roberts, and Geoff Walsh.  Helping out on the decks and with the RIB were: Billy Arcilla, Pete Markel, Hannah Nelson, Sue St. Sure, and Steven Thomas.

For several of people on the expedition, this was their first time out with ODA.  It’s always invigorating for me to hear how much the new recruits enjoy participating in our activities.

One of the new divers was Erich. 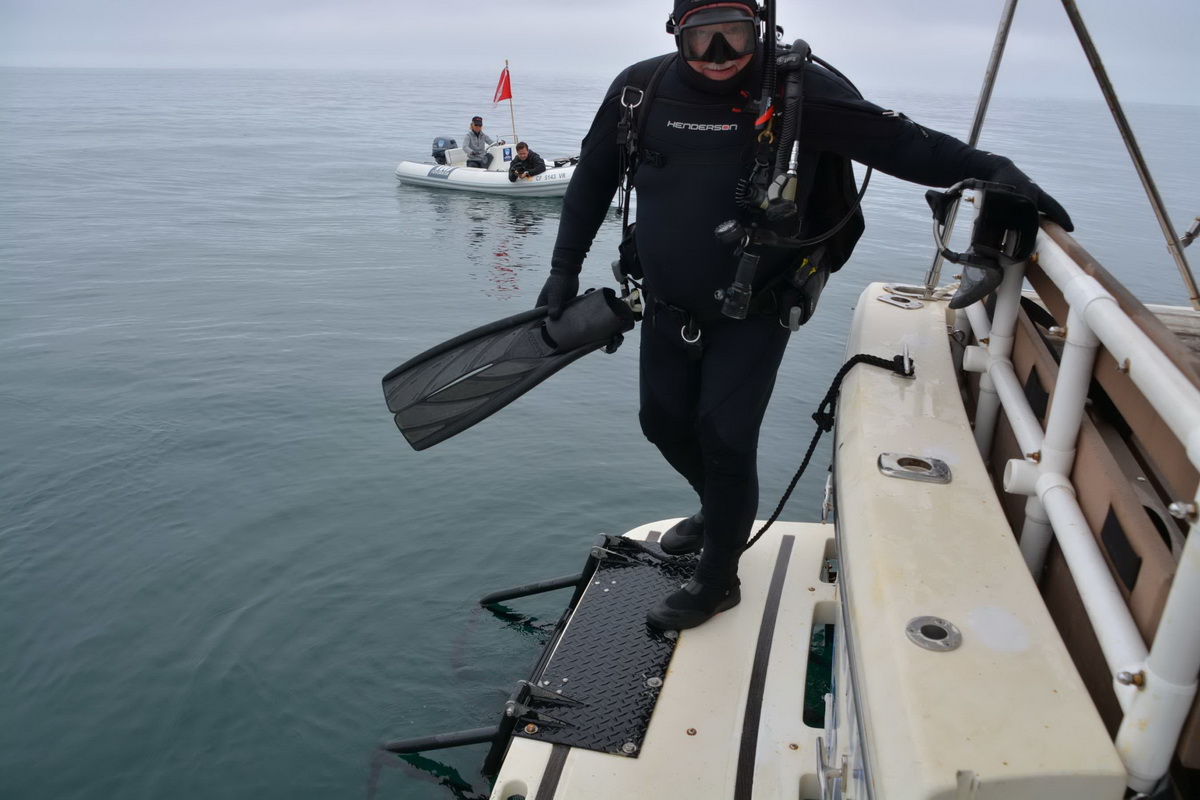 He brought along his underwater (UW) camera and put his skills to work by capturing some of the UW action.  Because we had perfectly flat seas, he was able to capture some really cool “over/under” pictures – these are the shots taken half above and half below the water.  As you can see, he came away with some very cool images.  Thanks Erich!!

Be sure to look at the photo gallery below to see all the great above and below shots we got. The pictures tell the story so well!! 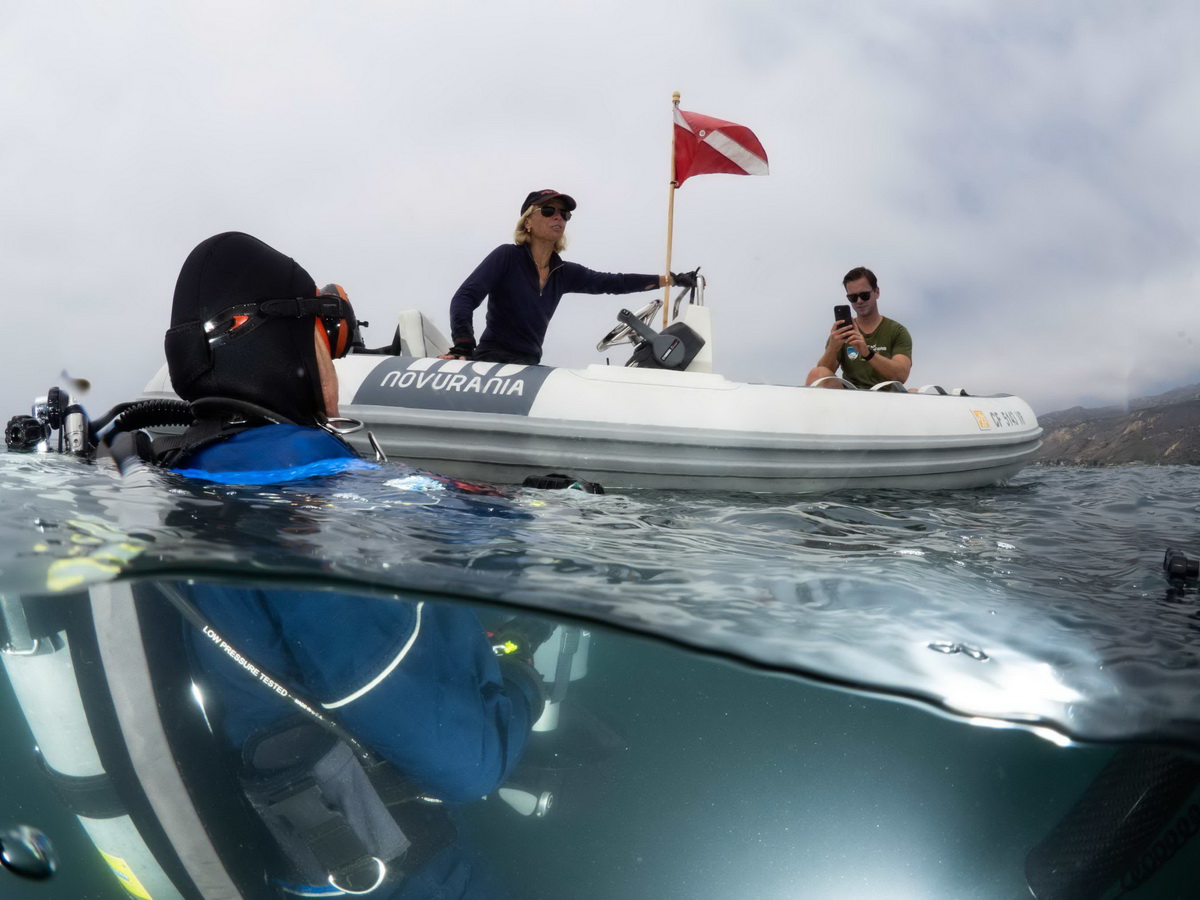 Kendall and Maureen both have hundreds of hours underwater but had never been on an ODA cleanup dive before.  It was great that they wanted to come out with us and lend their skills to help clean up our local waters.

Steven had heard about ODA from some friends of his at the USC film school.  He knew some of the people who had created a documentary about ODA and was inspired to see what he could do to contribute to our efforts.  It turned out that he helped a lot!

Overcast skies, but seas of glass!

We pushed off around 9 o’clock, and as we exited the harbor to head north, the coastal fog was really thick.  Visibility was about one mile.  There was no wind, so the seas were as flat as a piece of glass.  Great boating conditions.

We had never been at this site before, and it didn’t show up on our map, so it took us a little while to find it, but we got there around 11am. 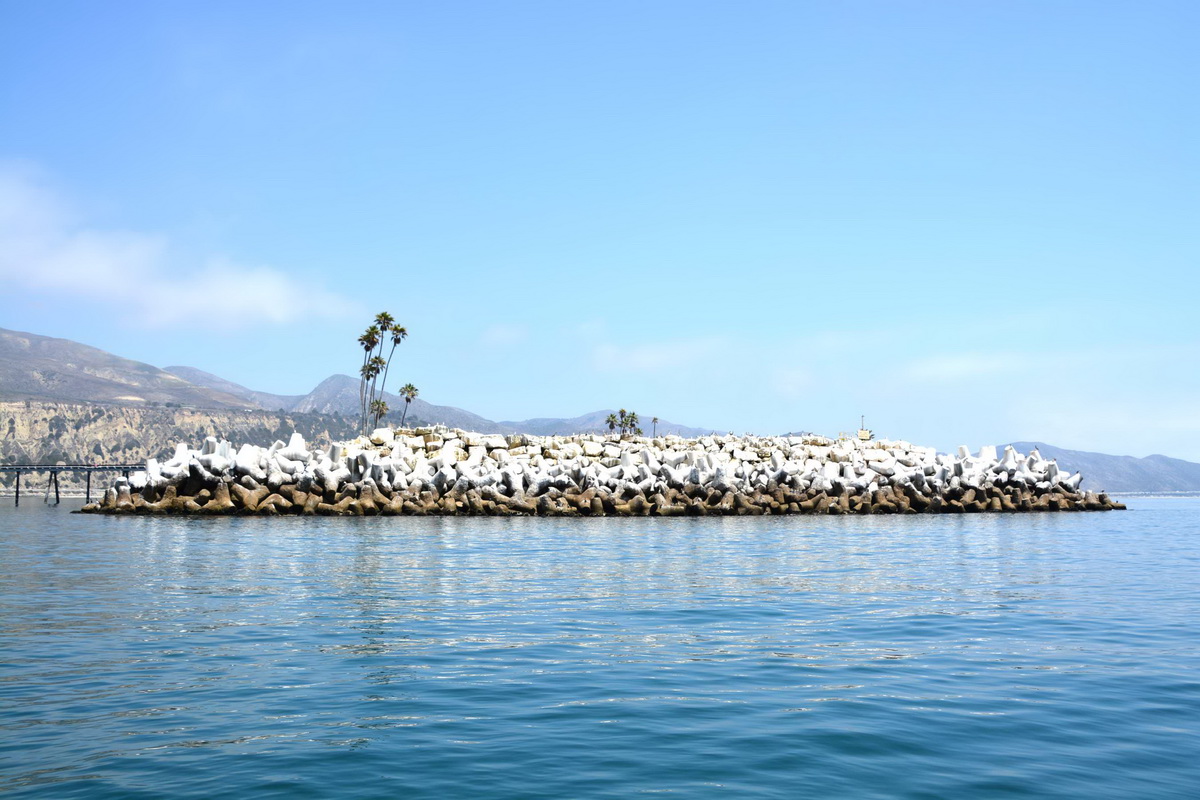 We anchored about 100 yards away from the “island.”  I put that in quotes because it’s an artificial island.  It was created by an oil company that used it to transfer oil from the pipelines that are connected to the oil rigs off the coast.  The island was de-commissioned a few years ago and it no longer has any commercial activities happening there.

Now it is a haven for wildlife.  Just from the boat we saw hundreds of brown pelicans hanging out on the rock pilings, along with dozens of cormorants and seagulls. 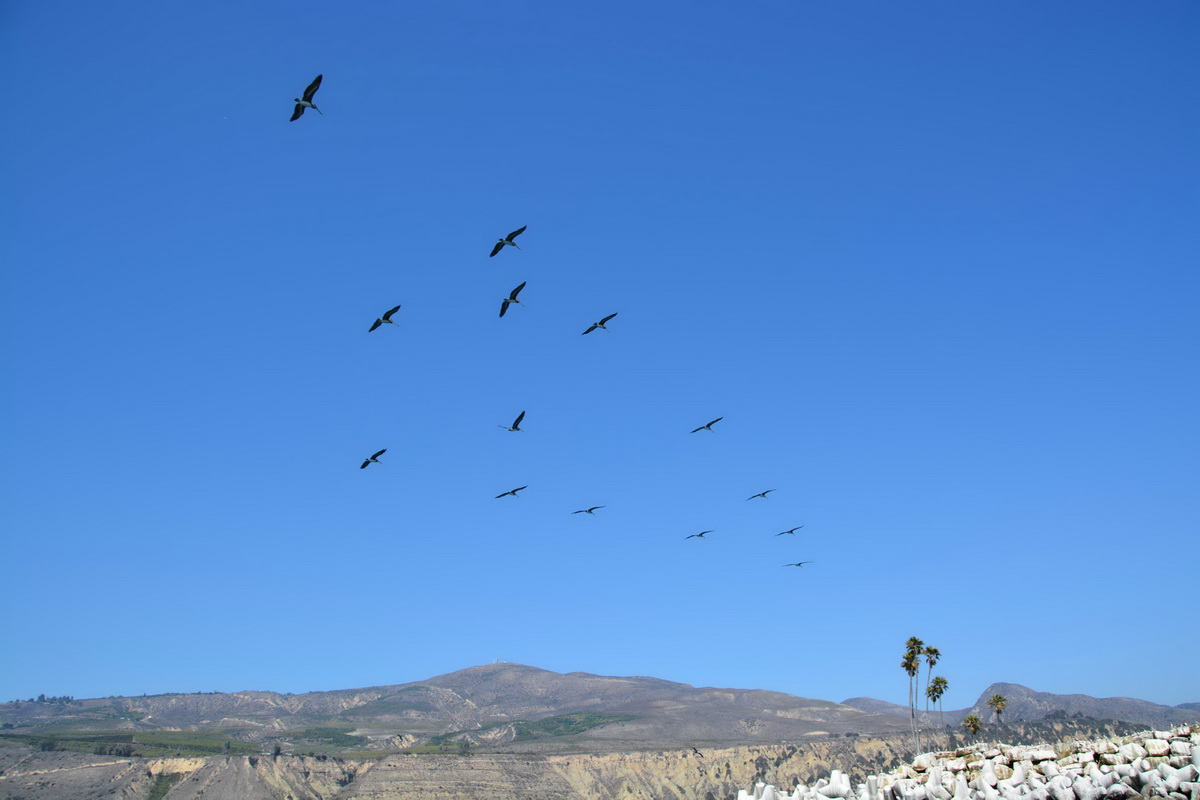 Erich, Al, Kendall, Maureen, and Geoff jumped in the tranquil waters and grabbed their bags stuffed with lift bags, as well as their scooters.  They headed the short distance to the structure and dropped down to the bottom at 30 feet.

The UW vis (visibility) was pretty good at the surface but got reduced to less than 10 feet at the bottom.

This “island” is actually pretty small, about 200 feet by 200 feet.  Because it was easy to get around it, the divers broke in to two different teams.  Geoff was using an underwater scooter to power through the water, so he towed Erich behind him.  Al followed them on another scooter.

Our second team, Maureen and Kendall, went in the opposite direction. 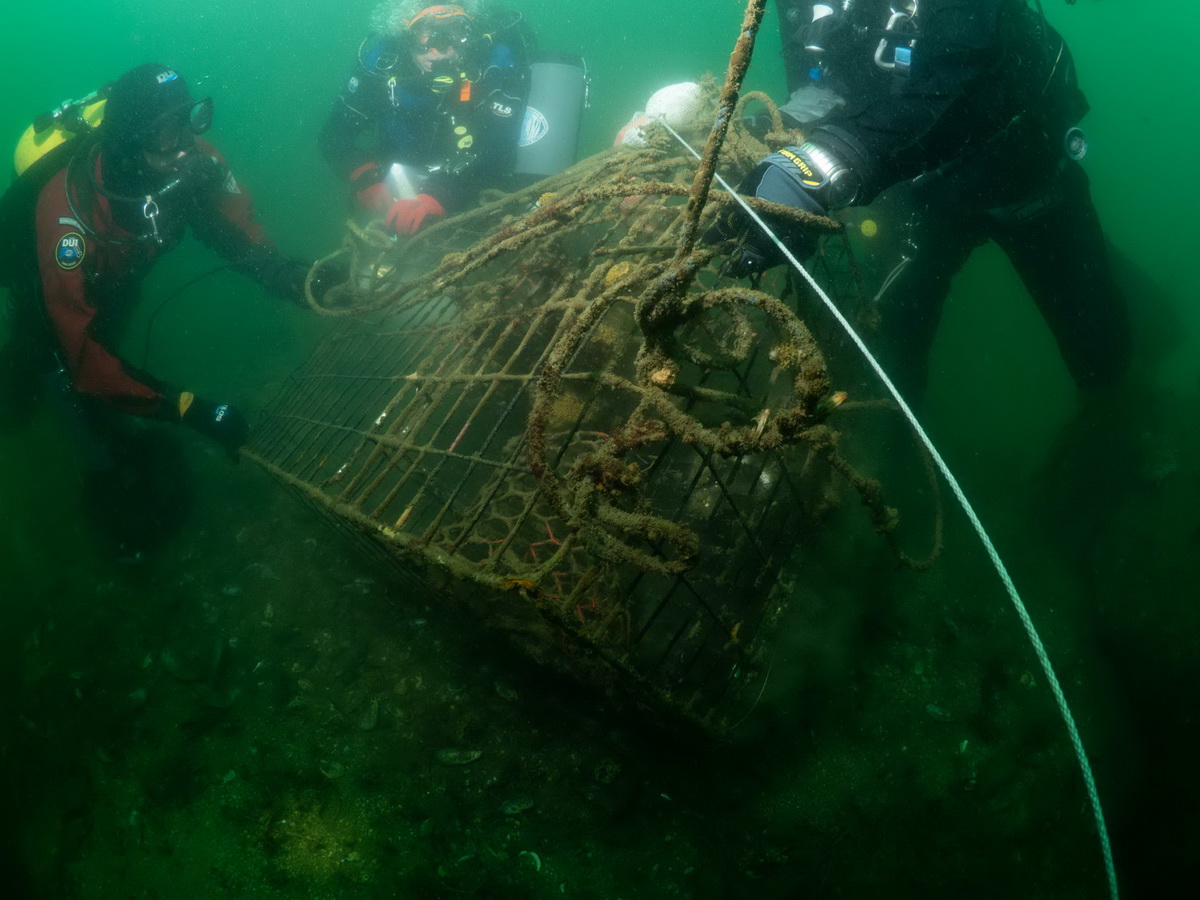 After about 15 minutes we saw the first set of bags pop up.  Because of the weight of a trap, it normally takes two lift bags to bring it to the surface.  So, when two bags pop at the same time we know there is something heavy that they’re holding. 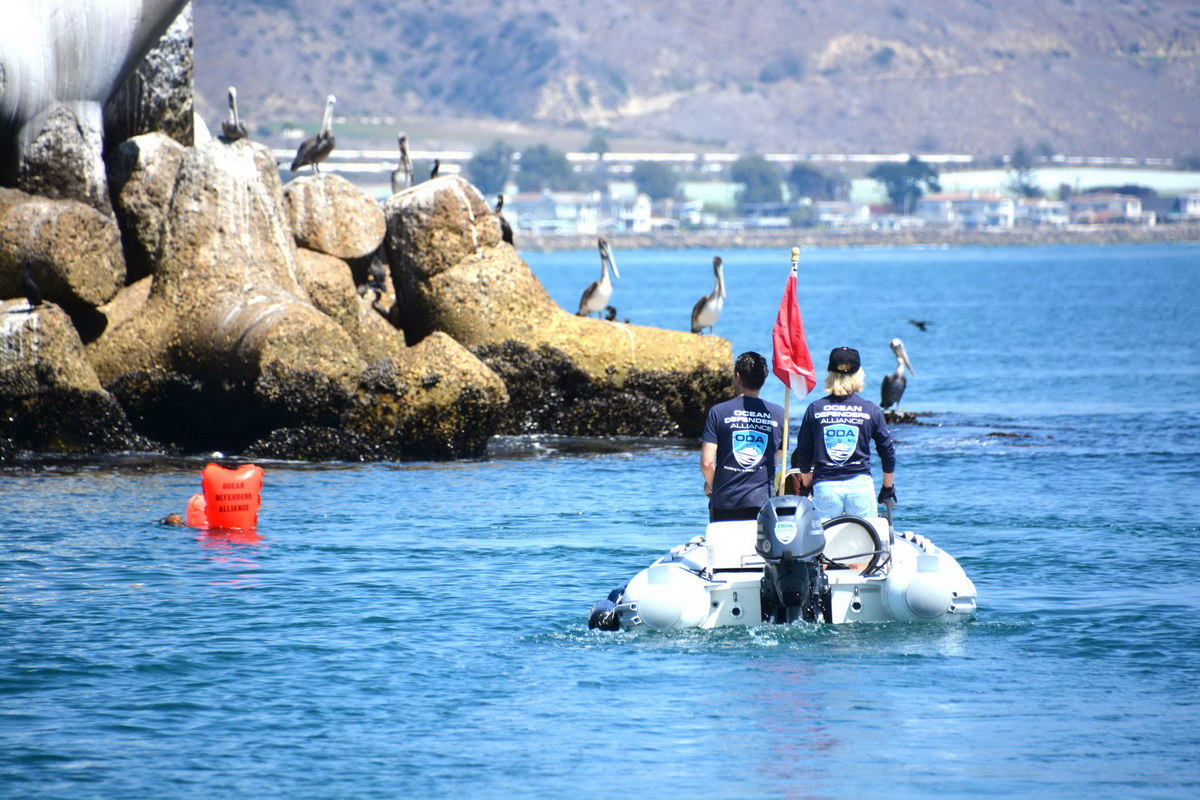 The RIB (rigid inflatable boat) team quickly headed over to the bags and got to work.  Sue was handling the boat, while Billy hooked a tow line up to the trap.  Pete was filming all the action as Sue towed the trap back to us on the LegaSea.

As soon as we had the first trap hooked up to the davit line (a crane attached to the bow, or front, of our boat), another set of lift bags broke the surface about 200 yards away.  This sent the RIB team into recovery mode again. 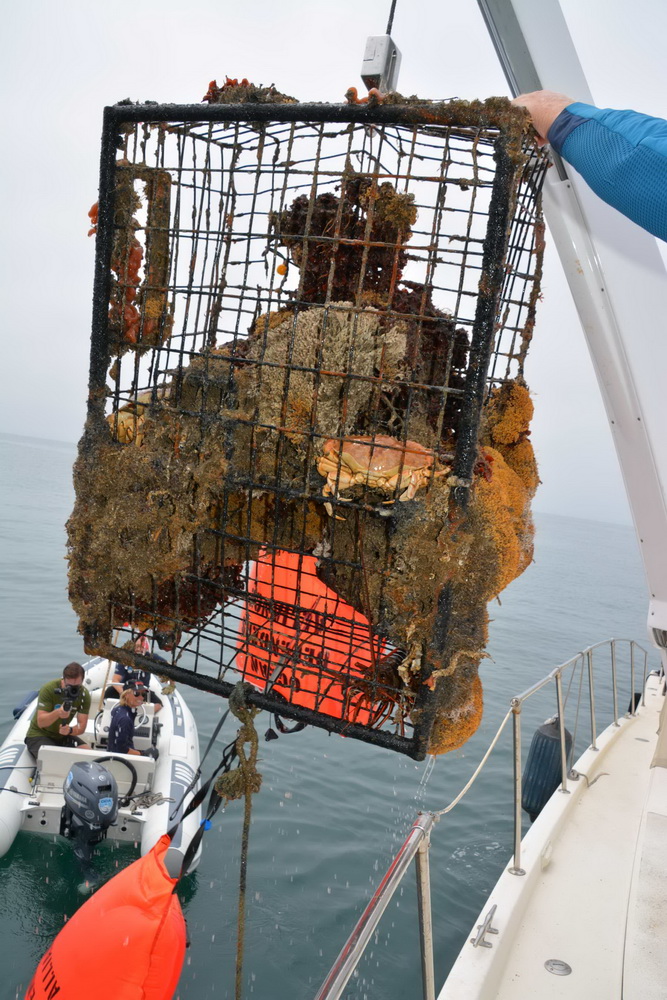 As we were hauling that first trap onto the deck, we could see that there were live animals in it.  Once we landed it on the deck, we broke the trap door open and released the critters.

When the RIB came back with the second trap, and we brought it onto the front deck we could see more animals in this one, too.  This time we couldn’t get the door open, so we realized we’d have to cut the top of the trap off in order to get the animals out of there.  Steven and I grabbed the bolt cutters and went to work. 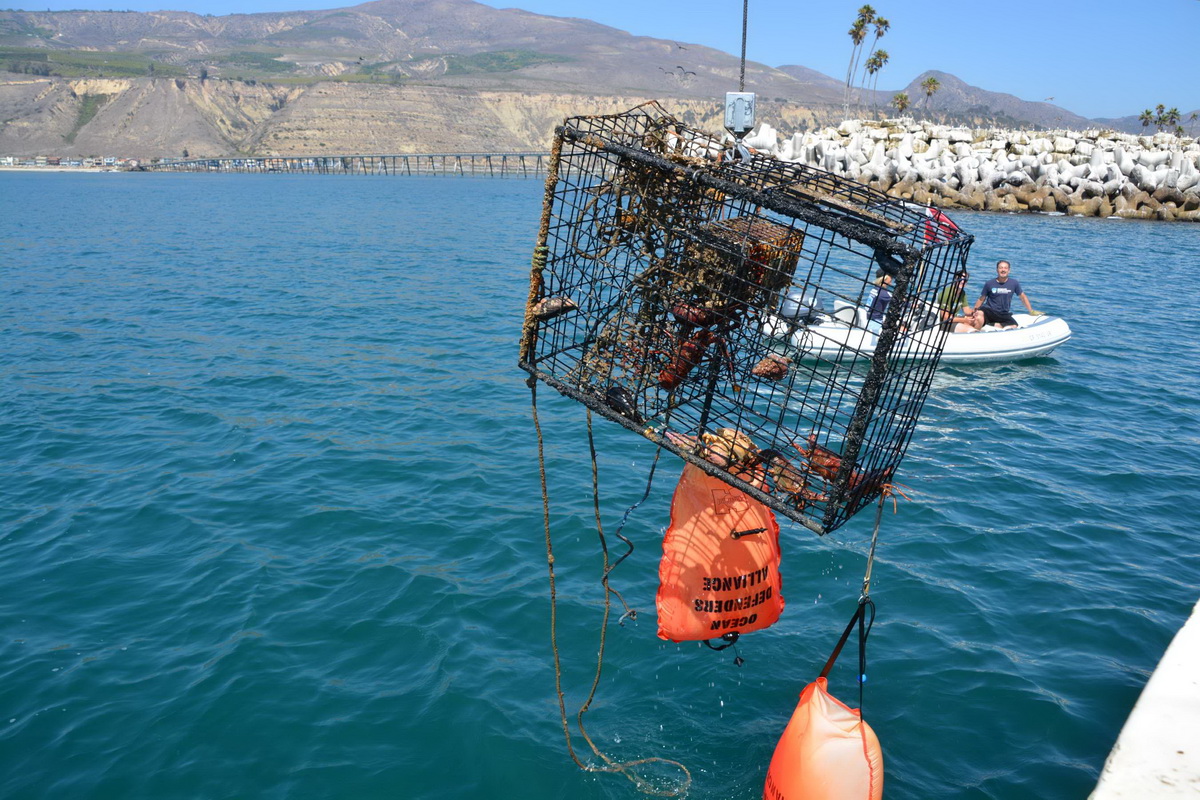 By this time the divers were back on the boat, and we settled down to hear their stories. We all agreed it would be worthwhile to do a second dive here today.

About an hour later, after a surface break, all five divers were back in the water.  Before they headed to the dive site, I asked them to pose with a sign thanking the BTS fan club for making significant donations to ODA. 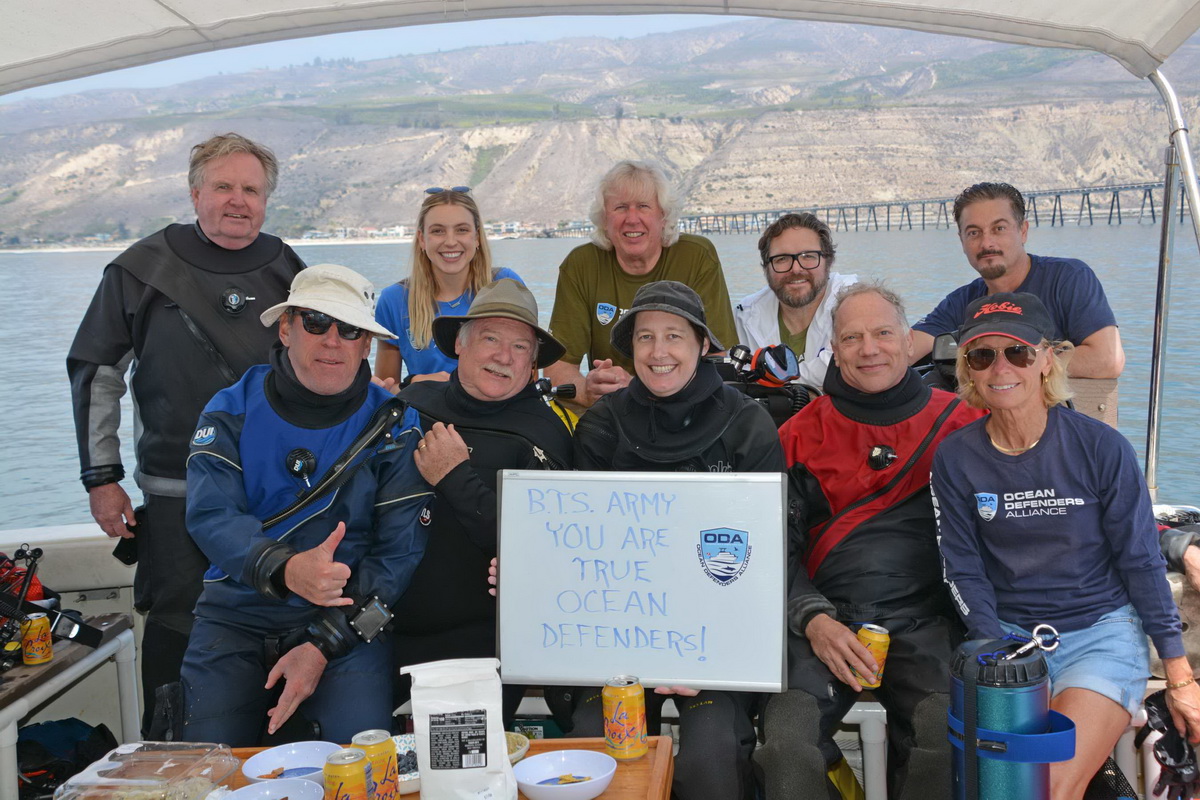 BTS is a very popular pop band also known as the Bangtan Boys, a seven-member South Korean boy band that was formed in 2010. They have a very active fan club that encourages their fan base to donate to causes they feel are doing good things for the planet.  We were thrilled and honored that they promoted ODA for one month on their website.  They raised over $12,000!

Back to the “Island”!

For the second dive, again the teams went their separate ways and we saw two more traps come to the surface.  Just like earlier, each one of the traps had animals stuck in them.  One had five lobsters in it, along with two rock crabs.  The last trap had a huge sheep crab in it. 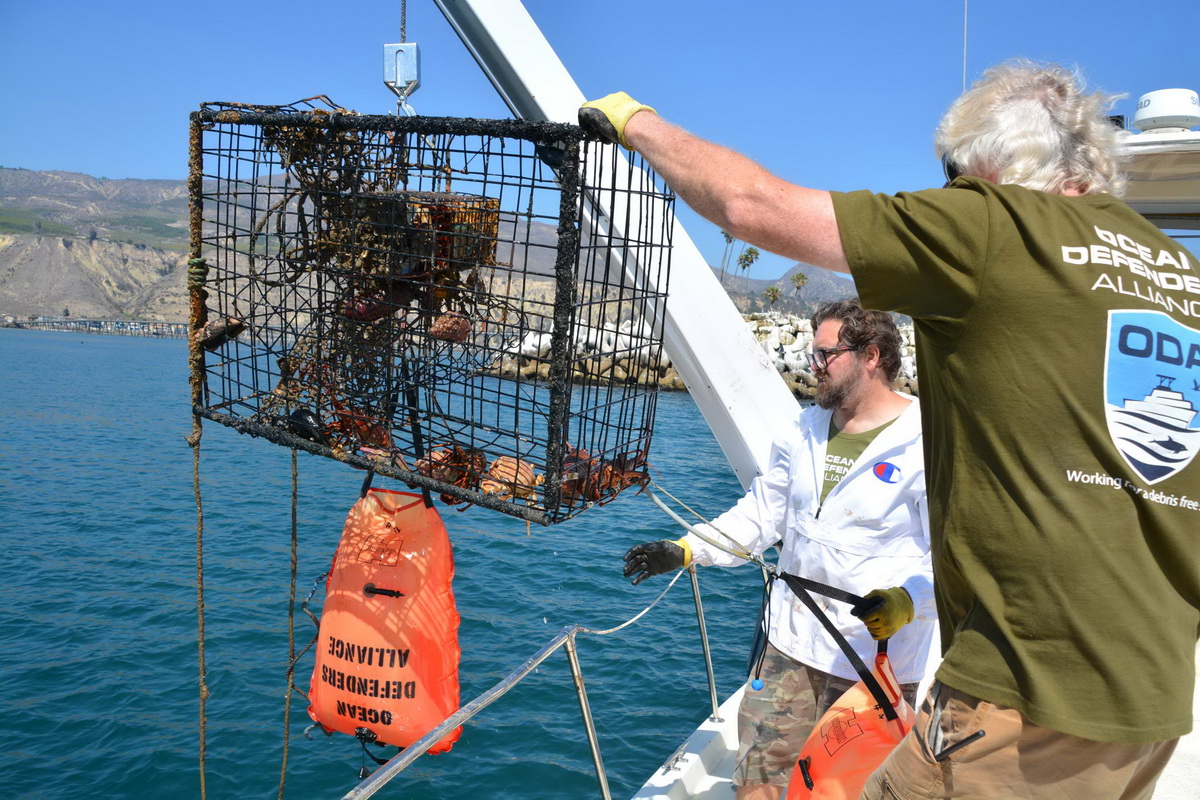 We had to cut the top off both traps to get all the animals out of there.  The sheep crab was not thrilled about me handling him and with all those legs to grab onto the trap, Steven and I had a hard time coaxing him out of there.  Just when I thought we had all his arms and legs free from the trap, he got one of his claws around one of my fingers… YIKES, that hurt! 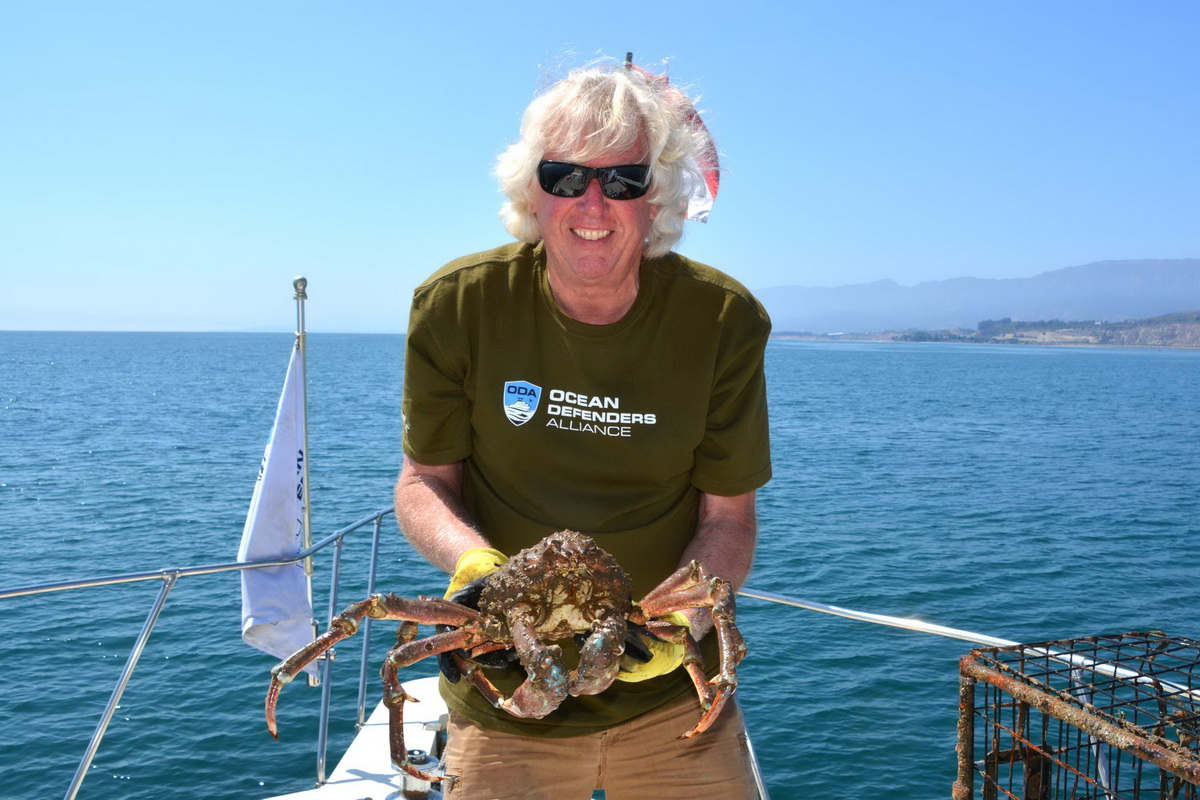 It was worth it.

Once we had all the traps secured and the divers back onboard, we pulled anchor and headed back to port, 16 miles away.

The divers were reliving their stories on the ride home, and I found out that Kendall and Maureen had come across a trap that was too buried in the sand to remove, but they were able to pry the trap door open and released 14 lobsters.  They also found two cormorants that had drowned in other traps.

Geoff, Al, and Erich also found a buried trap that had a sheep crab in it that they let loose. 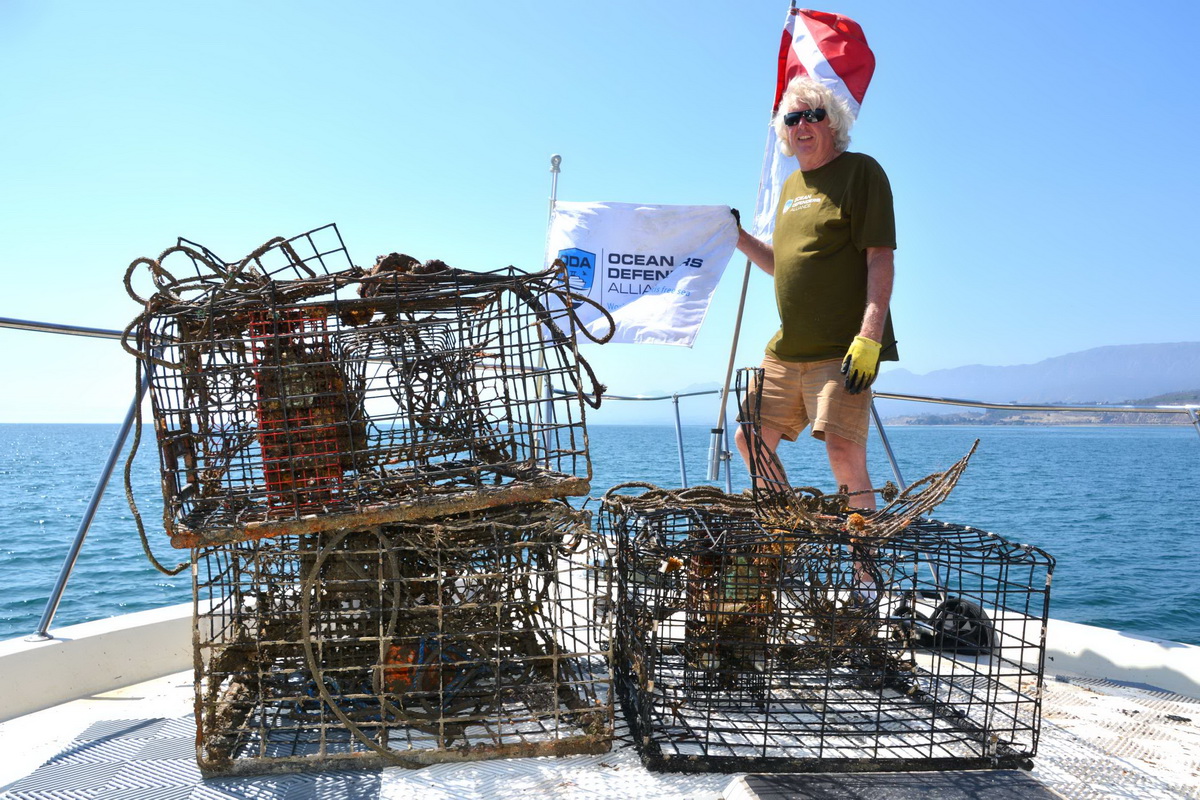 All in all, it was a magical day.  Twenty-six (26) critters turned loose to live another day.  Four abandoned traps were removed, with several others that we couldn’t get out but were disabled because the divers dismantled the trap doors so no more animals can get stuck in them.  It’s estimated that there were 15 traps that were just too buried for us to be able to remove.

Hope you enjoy all the UW pictures by Erich, and the topside ones taken by Hannah.  I’m sure Pete has some great video too, that will be showing up on our social media platforms.

Thanks to all these GREAT volunteers for making this such a rewarding day!