Sandy Beach in Oahu Gets Cleaning by ODA

Aloha from Hawai’i.  Hope you all had a wonderful holiday season and have big plans for 2020.

ODA’s plans are to do more of the same as last year (more ocean cleaning!) and expand our horizons. 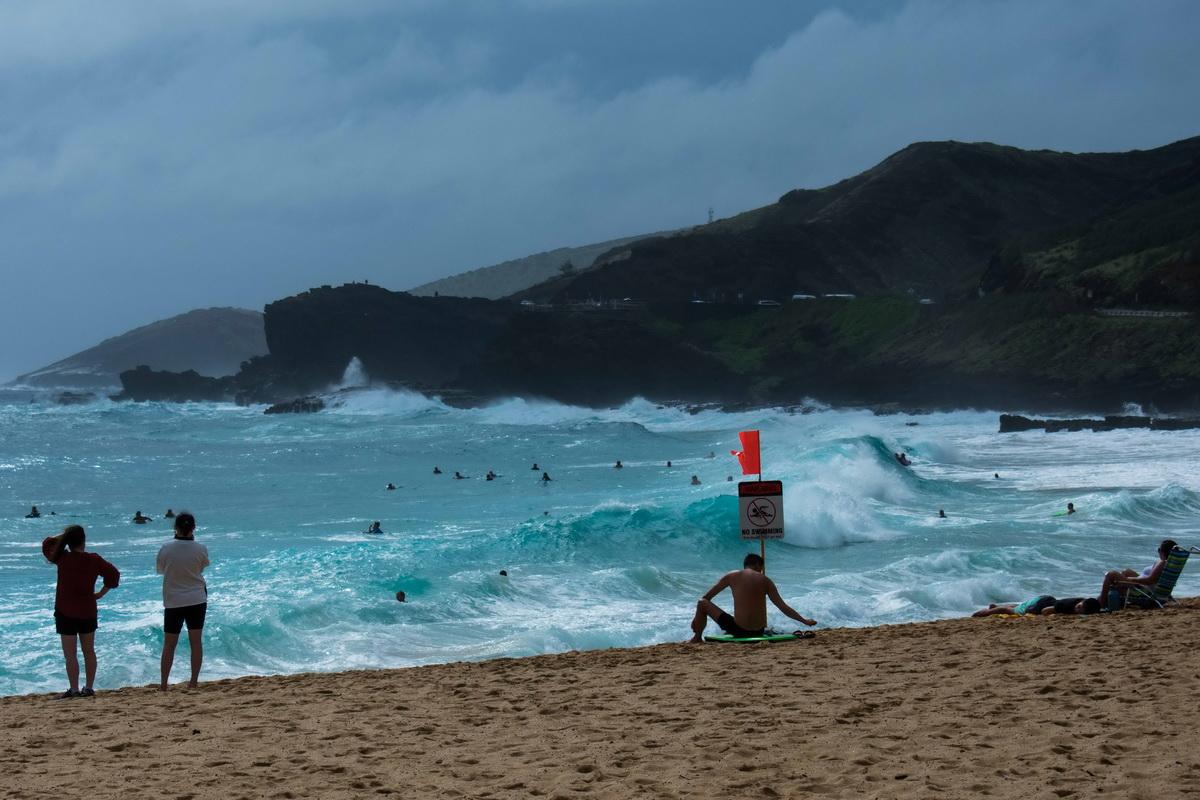 On January 10th I headed to Oahu, Hawai’i, where we continue to work with our partners at Island Divers Hawai’i (IDH).  We have already laid out the dive schedule for the next 12 months, so if you want to join in the fun, take a look at our calendar and get yourself signed up!

When my plane landed, I could see the island was covered with gray clouds, and it was slightly drizzling as I got in my rental car and headed to my hotel near Waikiki.  I immediately got on the phone with Ken Staples who helps coordinate these dive outings, and he said dive conditions were not looking favorable for us to get in the water on Saturday (which was the next day).

He was right.  Come Saturday morning the winds were howling, and it was raining on and off.  Glenn Roberts scouted out the dive site, from land, and took a few pictures of the huge waves that were crashing into the site (see below).  Around 10 o’clock ODA/IDH called off the dive.

So, Ken and I decided to see if anyone who had signed up to go out on that dive wanted to shift gears and do a beach cleanup.  We got a few positive responses, so I headed to a local hardware store and bought some tools we need to pick up beach trash.

We met at a place called Sandy Beach Park.  And it lived up to its name, as there was a vast swath of sandy beach, stretching for miles.  The skies were overcast, and the waves were looking gnarly; the kind that only surfers take a liking to.

Sure enough, the parking lot was loaded with cars and trucks laden with surfboards.  The ODA folks showed up with smiles and some had their own trash-picking tools.  We were an odd group amidst all the surfers. They had to be wondering what the heck we were doing there with buckets and not a board! 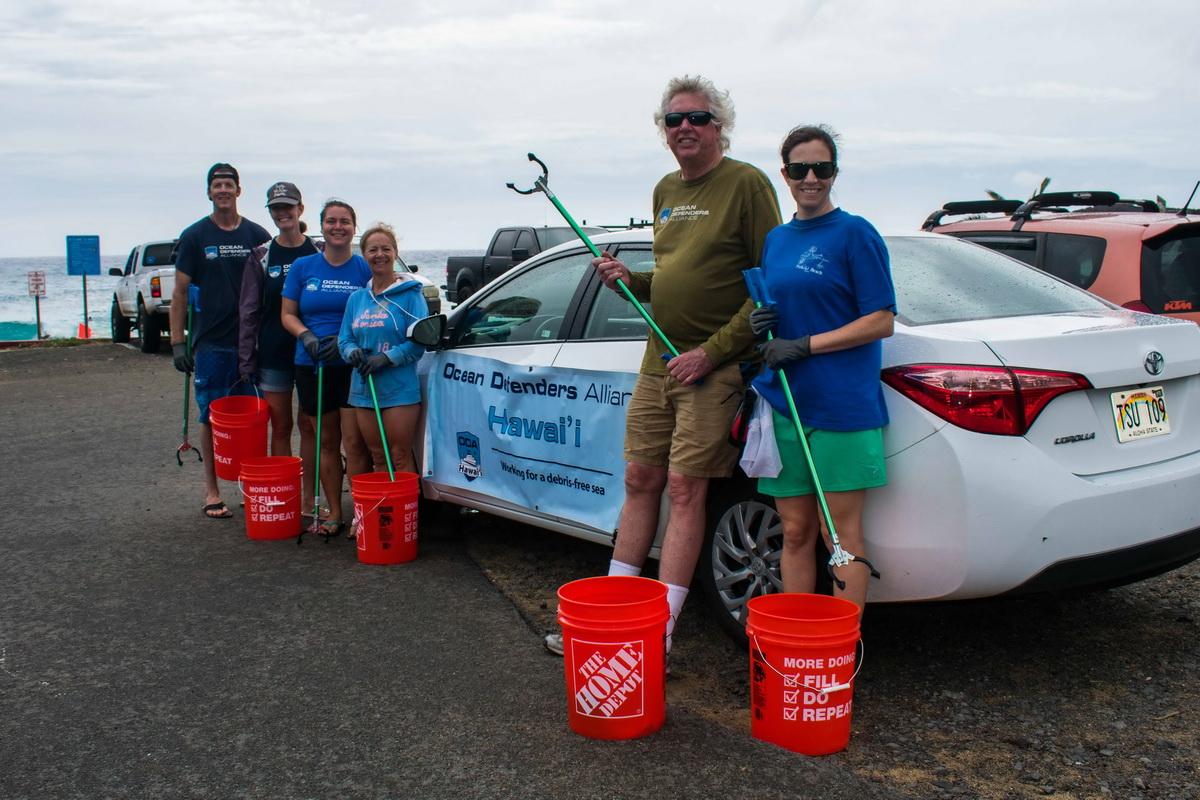 Volunteers this day were: AJ Jaeger, Mary Gilreath, Karen Hodder, Pam Hodder, Cindy Staples, and Ken Staples.  After we posed for a few pictures to document the start of the cleanup effort, we spread out up and down the beach looking for debris. 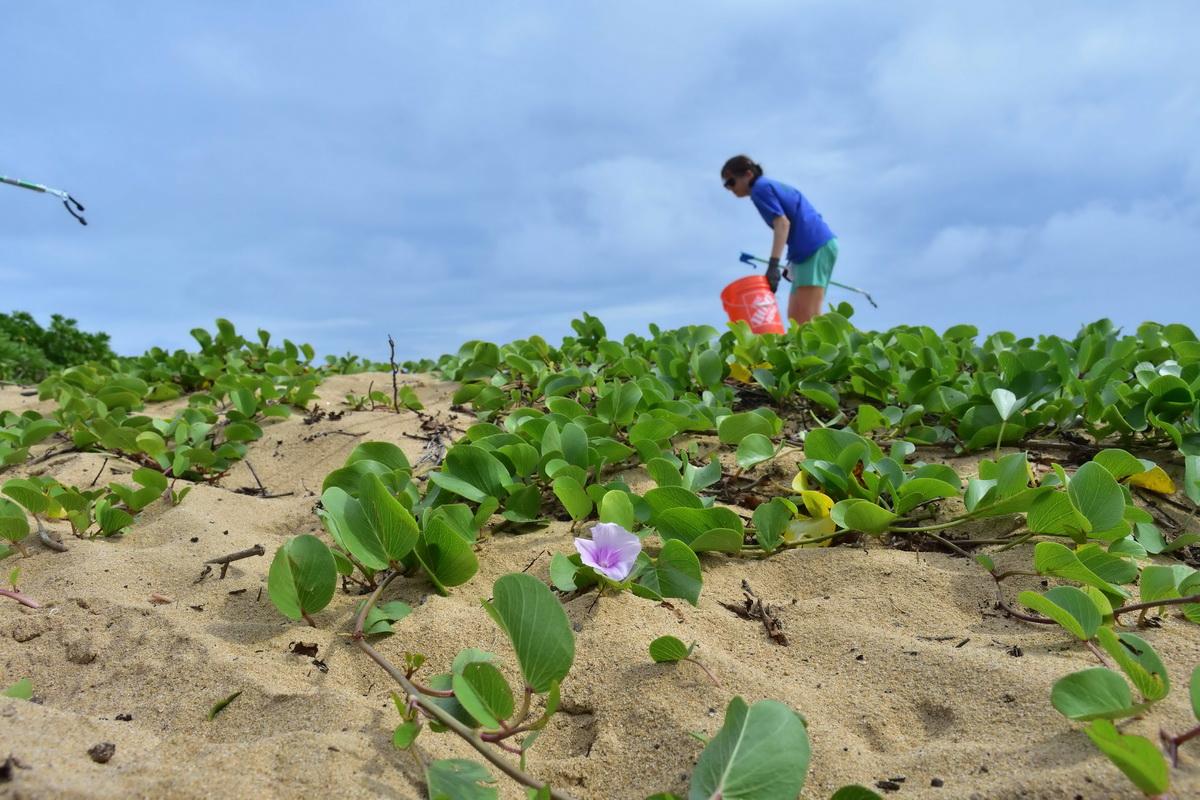 It didn’t take us long to find lots of the typical trash one would find at any beach:  cigarette butts, soda and water bottles, chip foil wrappers, polystyrene (Styrofoam), plastic forks and spoons, and also fishing gear (some clumps of nets, mono-filament line and pieces of Hagfish traps).

Usually when we do these cleanups the people who are out enjoying their day at the beach avoid eye contact with us. Perhaps we make them feel guilty that they aren’t participating.  But on this day, we were getting lots and lots of people thanking us for what we were doing.

One group of teenagers who were watching their friends out on the wild waves, asked us questions about who ODA is, and were really appreciative of our efforts to clean their beach.  Another guy came up to Ken and Cindy and gave them a bottle of champagne as a thank you.  Salud! 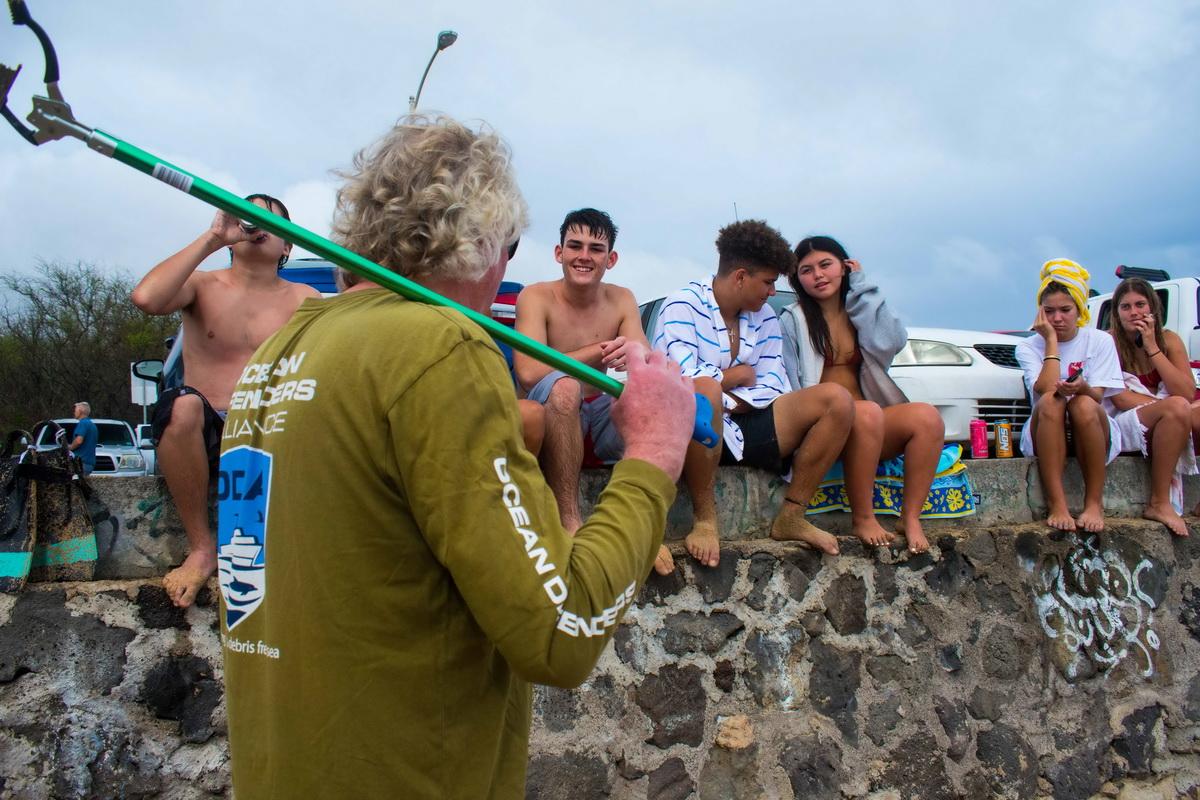 We covered about 400 yards (about a quarter of a mile) of the beach.  We posed for our “Catch of the Day” pictures and properly disposed of all the debris we had collected. 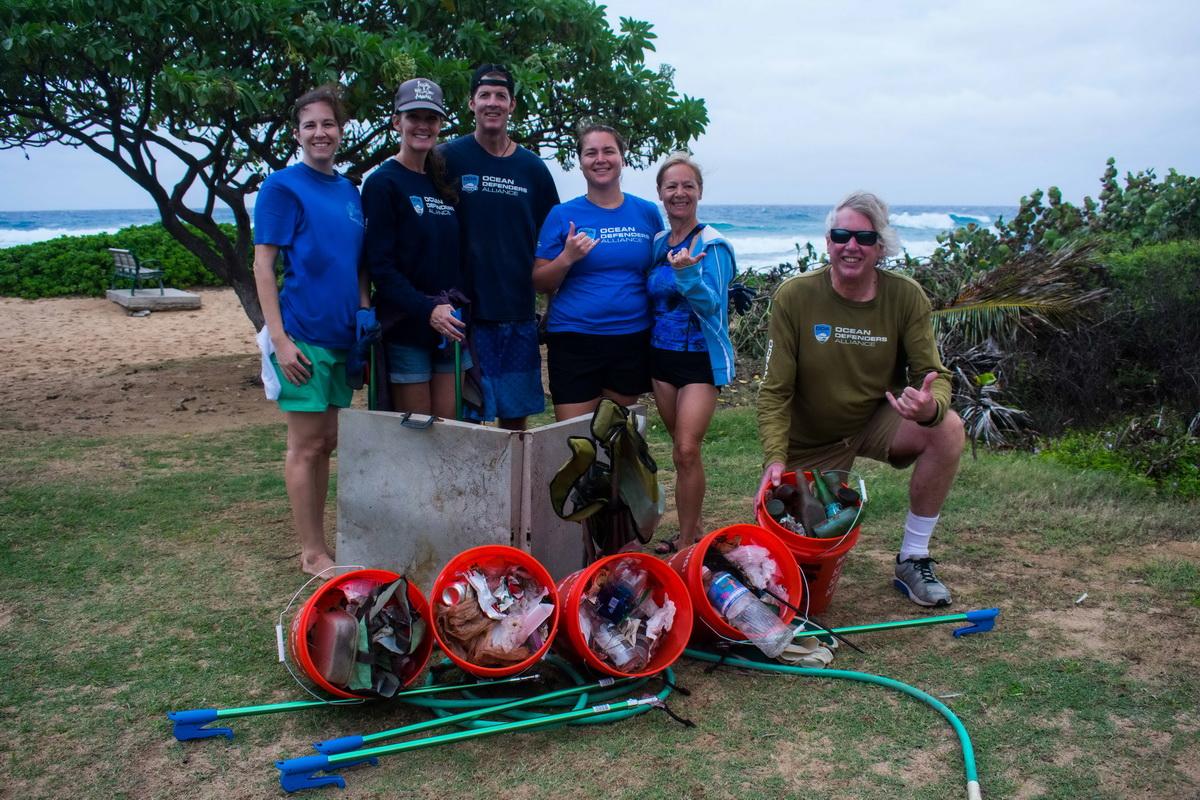 As we were packing up, Ken and I decided to go to another beach to see if we could find any more stuff to clear away.

We pulled into the parking lot of a beach called Sherwood Beach.  This place was not packed with surfers and was sparsely populated.

But it didn’t take us long to find piles of plastic.  What was disturbing was the amount of microplastics we were finding.  It was so small that our trash pickers couldn’t pick them up.  So, for as long as we could, Ken and I got on our hands and knees and started scooping the stuff into small piles and then deposited the junk in our buckets.

We removed another 3 buckets of debris. 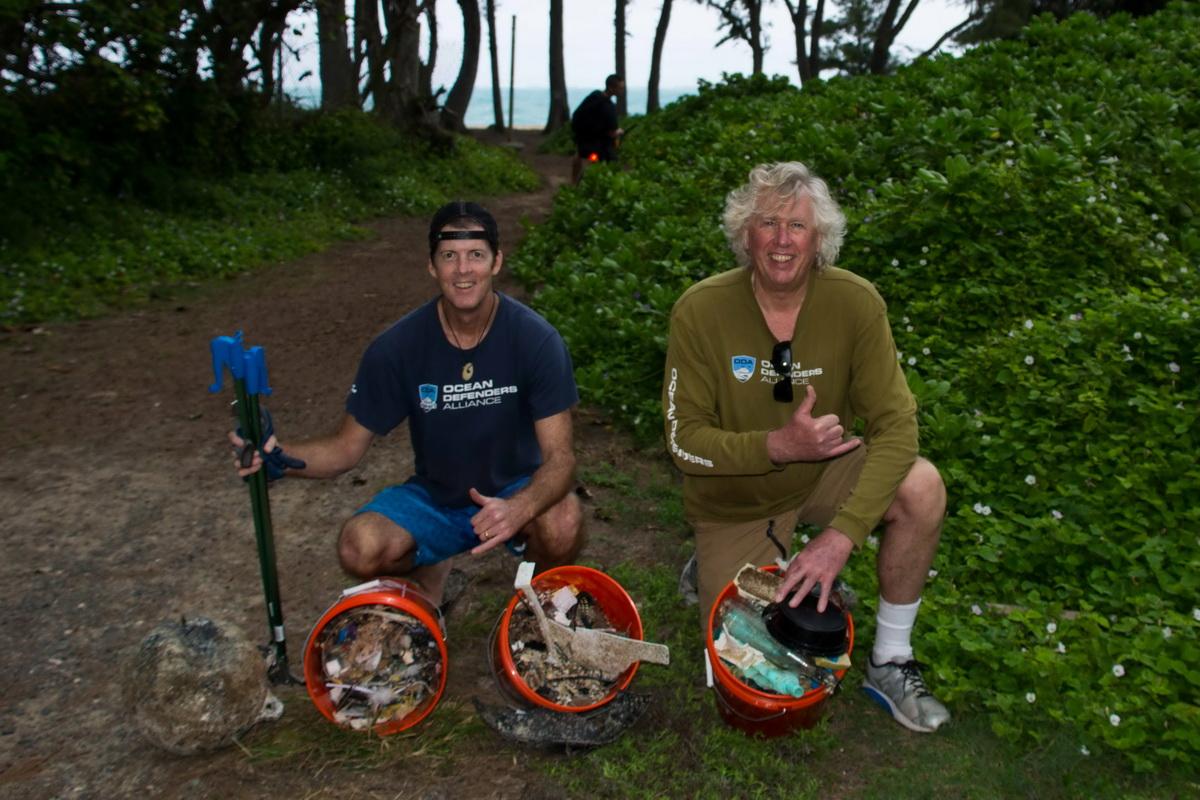 Later that night, I received an email from AJ Jaeger (our regular photographer). She had a video of another group who found massive amounts of microplastics at a beach north of where Ken and I were, called Kailua Beach.  There was so much that they were using shovels and scoopers to put the stuff in wheelbarrows and hauled it to a staging ground.

Even though the efforts of all these people is making a huge difference for specific locations, the plastic tide just keeps rolling into these remote islands all over the world.

Here's an example of microplastics that we actually got at Sherwood Beach: 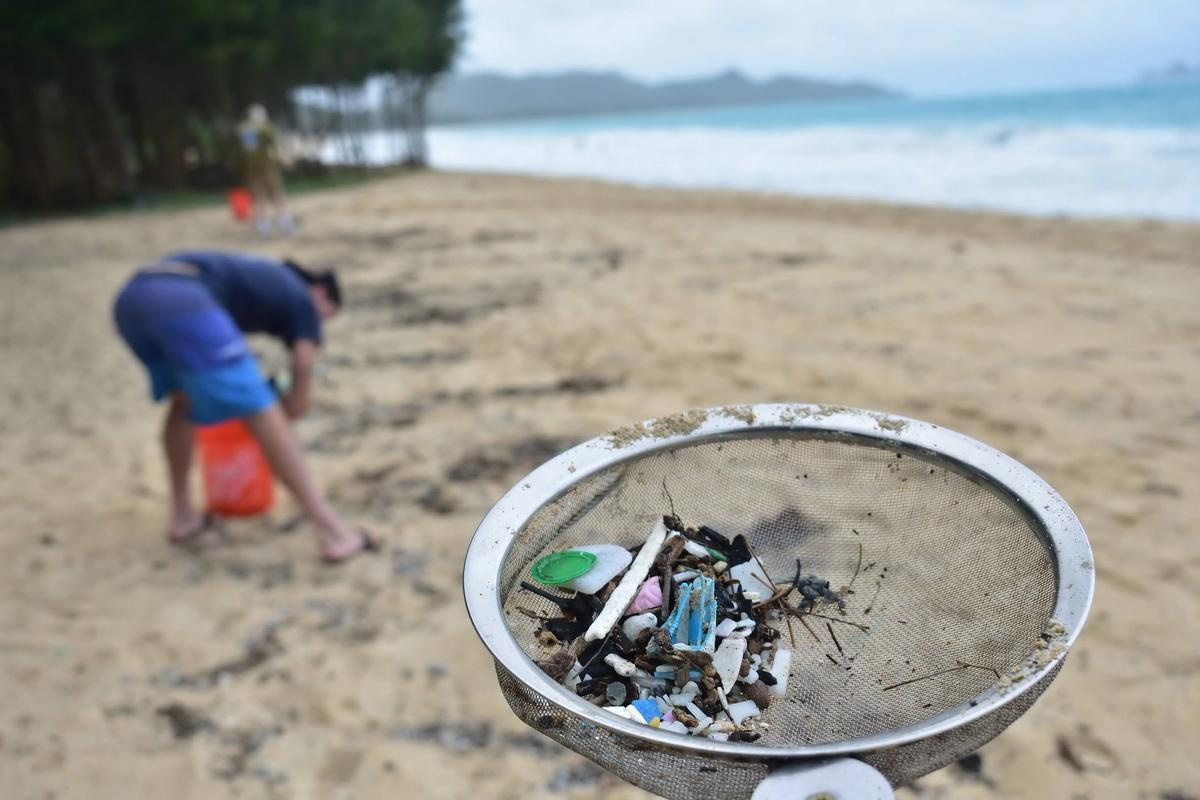 If we don’t want to see more whales, dolphins, turtles, birds and fish stuffed with this plastic, we’ve GOT to reduce our use of this deadly debris.  If we don’t, our seas and beaches will turn in to nothing but big trash bins.

Please join me in making a personal commitment to reduce your use of single-use plastic items.

We’d love to have you join us on a cleanup, but if you can’t make it or don’t live in Hawai’i or Southern California, please let us know “you’re with us” by sending a donation today! We’re all in this together. Thank you!