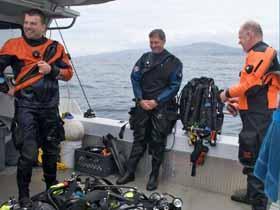 In mid May, 2009, I gave a presentation to Ocean Adventures Dive Club, in Venice, California. My talk was focused on sharks and what the Sea Shepherd Conservation Society is doing to stop the slaughter of over 100 Million sharks every year. At the conclusion of my talk I mentioned ODA and what we are doing here in SoCal to prevent marine wildlife from being killed in ghost traps and nets.

I immediately sensed quite a few people in the room perk up as they start asking pointed questions about how they could get involved. In particular Mike Wynd and Andy Huber were very inquisitive. So we continued to discuss how they could help us out.

It turns out that Andy and Mike are technical dive instructors, and know several other skilled divers that want to use their expertise to help clean up the environment. A match made in heaven for ODA. While we have been removing abandoned fishing gear from area's that are less than 100 feet deep, these folks have been diving to 500 feet, just for fun! Now they can use their unique talents to help us get to the deeper sites that have nets on them.

We had our first strategy meeting at Ocean Adventures on June 10th. Thank you, Steve Ladd, for allowing us use your excellent dive store for our first of many meetings!

This was set up to meet the folks that would be the primary participants in our first campaign. Attendees were: Mike Wynd, Andy Huber, Maciek Arkuszewski, Nick Ambrose, Don Robarge and Greg Cooke. Jim Simmerman also attended, he volunteered the use of his boat, the Giant Stride, and his crew for this event.

We discussed several potential sites for our first project and decided to attempt to remove a lost commercial fishing net that resting on the Caissons - large man-made structures that were intentionally sunk off of San Pedro back in the 1940's. There is at least one net that is draped over one of the Caissons, and it has been killing sea lions for a long time - if fact, one Sea Lion was found dead in the Caissons net a short time ago.

It was agreed that we would have 3 separate dive teams descend on the site to film and observe what condition the net/nets were in and which tactic we would use to remove the net. Since this is a deep dive, advanced training is required. Both Mike and Andy are technical dive instructors. Andy works with mixed gasses and Mike works with re-breathers. So, each of them headed their separate dive team that utilized those skills.

We left the meeting energized and agreed to do our first exploratory dive on June 20, 2009. Jim would bring the Giant Stride from its home base in Marina Del Rey, and I'd bring the Clearwater from Wilmington.

After much anticipation, the Clearwater pushed off from our slip at 8:30am on June 20. On board were Jim Lieber (first mate), Don Robarge, Greg Cooke and Greg Hager. The day looked ominous as we departed, dark skies and a chill in the June air. As we approached the Angels Gate lighthouse the seas were choppy with deep swells. Turns out the swells were actually 3-5 foot waves.

Despite the rough seas, we pushed on as we had arranged to meet the Giant Stride, which had left from Marina Del Rey an hour earler, at the site at 10am. The Giant Stride and the Clearwater both arrived at exactly 9:40am. What timing! We spent the better part of an hour trying to locate the Caissons. With the waves coming from 2 different directions, our boats were pitching up and down, and side to side.

The Giant Stride finally anchored above the Caissons and within minutes Mike and Andy had their teams in the water and descending. Don, Greg and I decided to wait until they had found the structures and come back with a report, before we would get in the water. After about an hour, the teams surfaced. Andrew Ainslie swam over to us and gave us a report.

They filmed and documented the condition of the net, and also cut some samples of the net away so we could determine which cutting tools would work best on cutting the net away from the structures. Because they got all the footage and stills that we needed, we decided that Don, Greg and I did not need to dive. Both boats then left to return to their respective ports.

Later that night I got an email from Nick. Maciek had downloaded the video he shot, and I got my first glimpse of what the Caissons had in store for us. At first glance the structures are loaded with life. Colorful pink, red and orange club anemones dominate the open surfaces, and there are metridians, gorgonians and a proliferation of benthic life all over the place.

Then the images of the abandoned net started to appear. One end of the net starts inside the Caisson, then rises 35 feet over one lip and then heads back down and into the sand. There are spots where there are a lot of club anemones attached to the net, but most of it is not colonized and you can tell that animals could get trapped in it. You can see skulls littering the bottom. This is excellent footage and will save us a LOT of limited bottom time (due to the depth). Thanks to the video, we can carefully study the site on a monitor formulate an effective plan of action.

While not as daunting as the net on the Infidel, this will be a complicated removal. We have set up a meeting for July 1st to come up with our final plan of attack to get this mindless net out of the ocean and thereby save marine wildlife.

I'd like to personally thank all the divers and volunteers that have helped out on this project, and will continue to help ODA clean-up the site. You are the life-blood of this organization.

While everyone is volunteering their time, there are always significant expenses (e.g. fuel, food, air, supplies, repairs) that we need to continuously cover. You can help! Please visit our Donation Page for ways to support ODA.