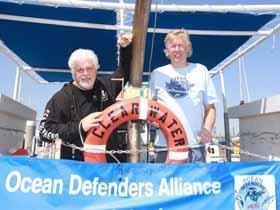 July 2009 was a very busy month for ODA. At the start of the month, Don Robarge, Greg Cook and I met with the team from Ocean Adventures dive club to strategize about how to remove the nets that are on the Caissons.

On July 6, Tobias Ehnus, from Ocean Adventures lined up a meeting with David Wilson and Andy Huber and I to talk about the possibility of getting Animal Planet to cover some of ODA's projects. David has produced several programs for AP and is really excited at the prospects that ODA offers as far as a TV program that would be dealing with an organization that is so involved directly with ocean issues.

The week of July 6-10, Jim and I started looking for a small inflatable boat that we can use for emergency situations on the Clearwater. We found an 11-foot Zodiac and purchased it for a decent price. It is nearly new, with a 4-stroke engine, so we won't be polluting like all the 2 stroke engines do.

July 11, found us going out to Old Marineland with Jim, Jeff Connor, Greg Cooke and Greg Hager. Although we did not find the traps we were looking for, we did remove some trap remnants and got some good u/w footage and pictures. On the way back to port we were treated to an escort of 2 huge dolphins for about 2 miles along the edge of a massive kelp bed. What a memorable return trip that was.

On July 13, I gave a presentation to the Sole Searchers dive club in Pasadena. The talk went very well and several people wanted to know if they could come out with us. We agreed to set a date and August 1 was agreed upon.

The weekend of July 18-19 were spent at the Animal Rights Conference, held this year in Los Angeles. Although there were not as many people in attendance as in years past, it was a very good way to meet with a lot of activists. I attended several discussion sessions that covered topics like how to get media coverage, how to put together a film or documentary, how to affect public opinion and how best to work with law enforcement.

On July 21, we had an exciting and rare photo shoot on the Clearwater at our dock. With us was Captain Paul Watson (founder and president of Sea Shepherd), and his fellow brave crewmembers Chris Aultman, Peter Hammarstedt, Amber Paarman, all now famous for their heroics on Animal Planet's hit "Whale Wars' series. Also joining was Deborah Basset from Sea Shepherd, Jeff Connor, Don Robarge, ODA board director Jim Lieber, and myself. Elizabeth and Duffy Healy were kind enough to lend their considerable photo skills to take some great pics of the whole crew.

After the shoot, everyone hung out for a couple of hours just talking about ODA, Sea Shepherd and the state of the world's oceans. This was a great opportunity for everyone to spend invaluable time with Paul, Peter and Amber, who are usually out to sea someplace far far away. As an added plus, I finally got a chance to show Paul around the Clearwater, which he hadn't seen since we had it shipped down to So Cal in 2006. He was duly impressed with all the upgrades we have done to her.

Unfortunately, we had to cancel the scheduled dive for July 25 due to unfriendly seas. There were reports of 20-foot waves in Huntington Beach!

On July 31, Jim, Jeff Connor and I attended a screening of the film "The Cove". This is an excellent film, although disturbing content. It's about the terrible and covert dolphin slaughter that takes place annually in Japan in select areas (hence the name "The Cove"), where heartless butchers kill 23,000 dolphins from September to January, and select some souls to be saved, only to be sold to exhibition parks in Asia and elsewhere. This is a must see film, and please catch it while you can in theatres, online and via DVD. I got to meet up with several old friends at the screening, including Ron Colby, who made a popular movie about Paul Watson called "Ocean Warrior". Ron may be riding with DA soon to expertly film our important life-saving activities on the water.

So, you can see ODA is very busy, and this does not even cover all the maintenance and repair work that we are doing on the Clearwater between dives. Hope you all had a great July and hope to sea you on the water with us sometime soon!