I’ve had the pleasure of being asked to give presentations to the students of the Clark Magnet School for neigh on five years now. Dominique Evans is a teacher there, and her passion for ocean awareness and conservation motivates her students immensely.

Dominique is very aware of the fact that not many kids these days get out into the field to do some hands-on learning. So, in order to make that happen, she submitted grant requests, and with the subsequent funding from them has been able purchase two Remote Operated Vehicles (ROV’s).

The students have been learning how to operate the ROV’s both in the pool at school, and they have used the equipment to help Ocean Defenders Alliance (ODA) with some of our harbor cleanups. 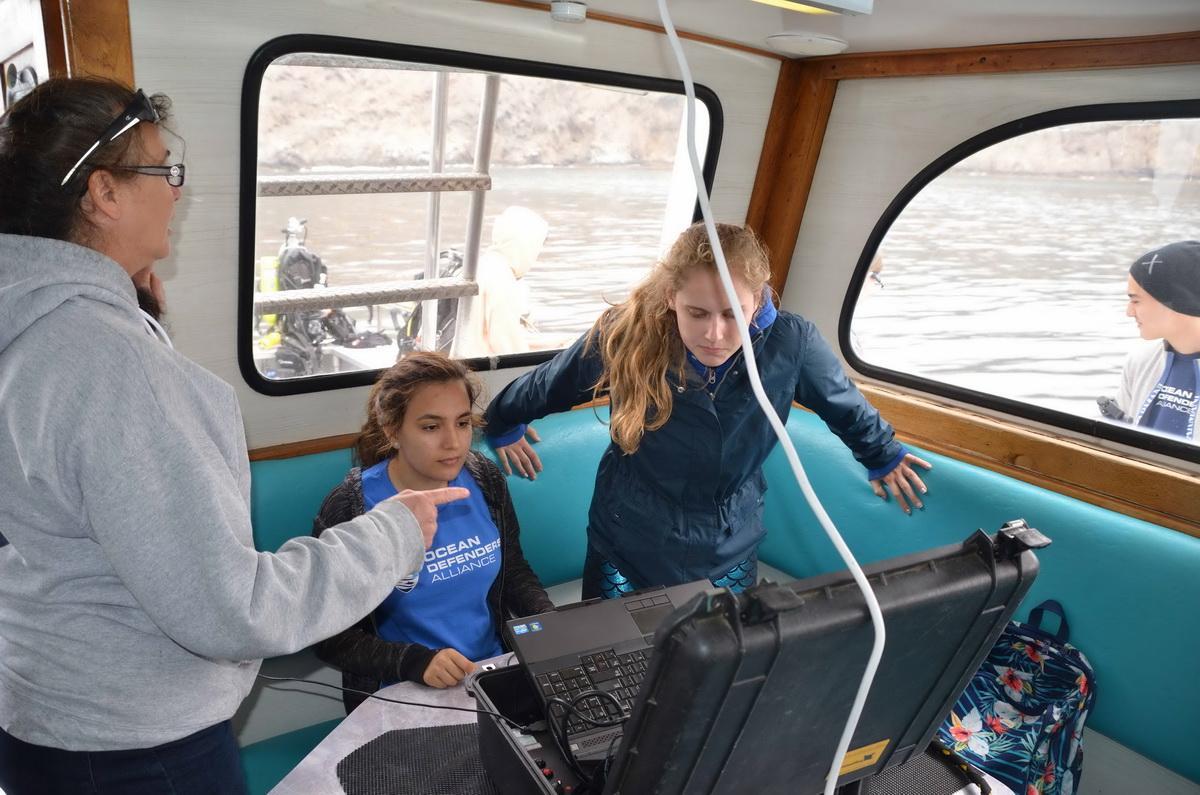 These machines utilize two different technologies: one is digital video and the other is underwater (UW) sonar. The video works fine when the UW visibility (vis) is good but does not work as well when vis is bad. Sonar on the other hand works with or without good visibility. It acts kind of like an X-Ray: It can see through obstacles and gives you an accurate picture of what lies directly in front of the sensor. This can really be helpful when UW visibility is bad. As you may know, bad UW vis is normal for us in California.

We have been hoping that these ROVs will be able to help us locate abandoned fishing gear (ghost gear) in the water without having to send divers down on a scouting expedition. Reconnaissance dives can take-up valuable time and put divers at risk.

On Friday, I was invited to go out to Anacapa Island with Dominique, her students, and seven volunteer divers from the County of Ventura’s Rescue Dive Team. We boarded a dive boat in Ventura Harbor and motored to the island under dense fog. 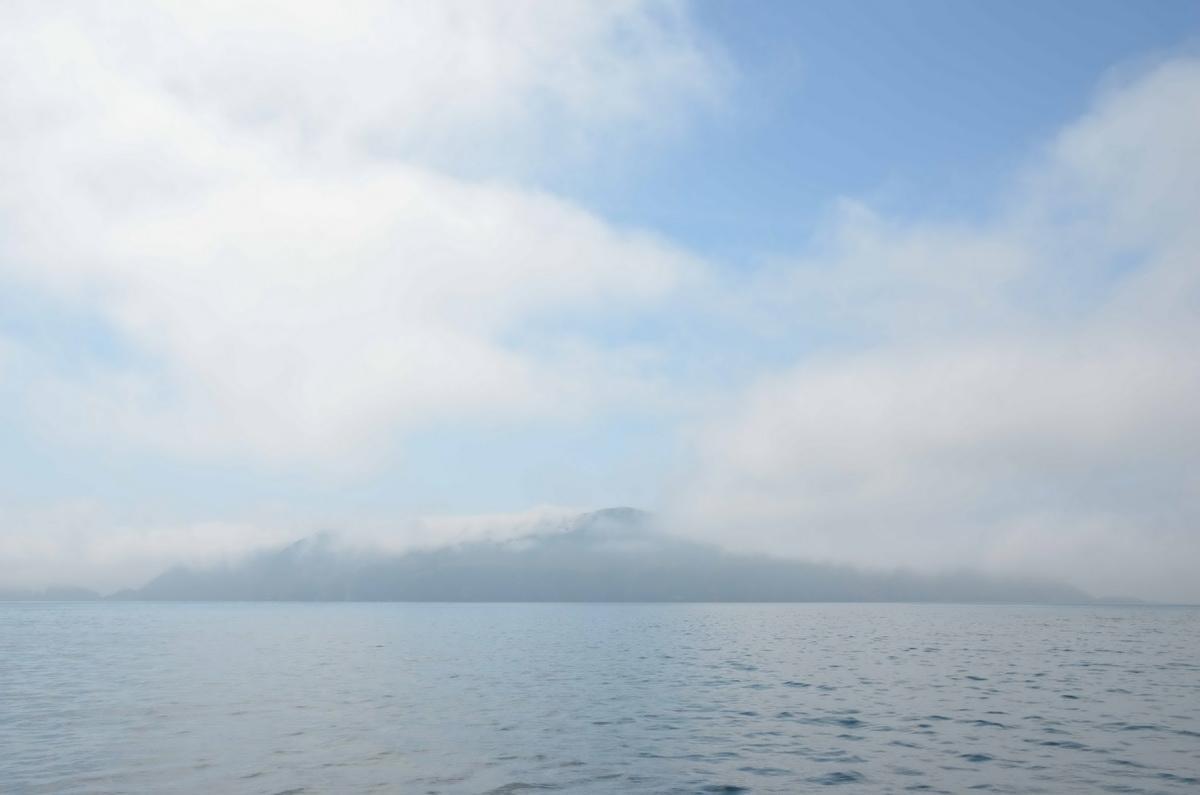 Anacapa Island is a small volcanic island located about 11 miles off the coast of Port Hueneme, California, in Ventura County. It is the smallest of the northern islands of the Channel Islands archipelago and is within the Channel Islands National Park where ODA has performed a large number of debris removal dives.

We went to a spot on the island that ODA has been to many times; a place called Coral Reef, which is within a stone’s throw of Cat Rock on the southwest side of Anacapa.

We anchored our vessel in an area where the depth was about 35 feet.

The ROV Detects Debris and Assists with Recovery

One of the students, Gabriella, was all smiles as she tossed one of the ROVs into the water. This was their first time doing this in the open ocean. Shortly thereafter, another student did the same with the second one. 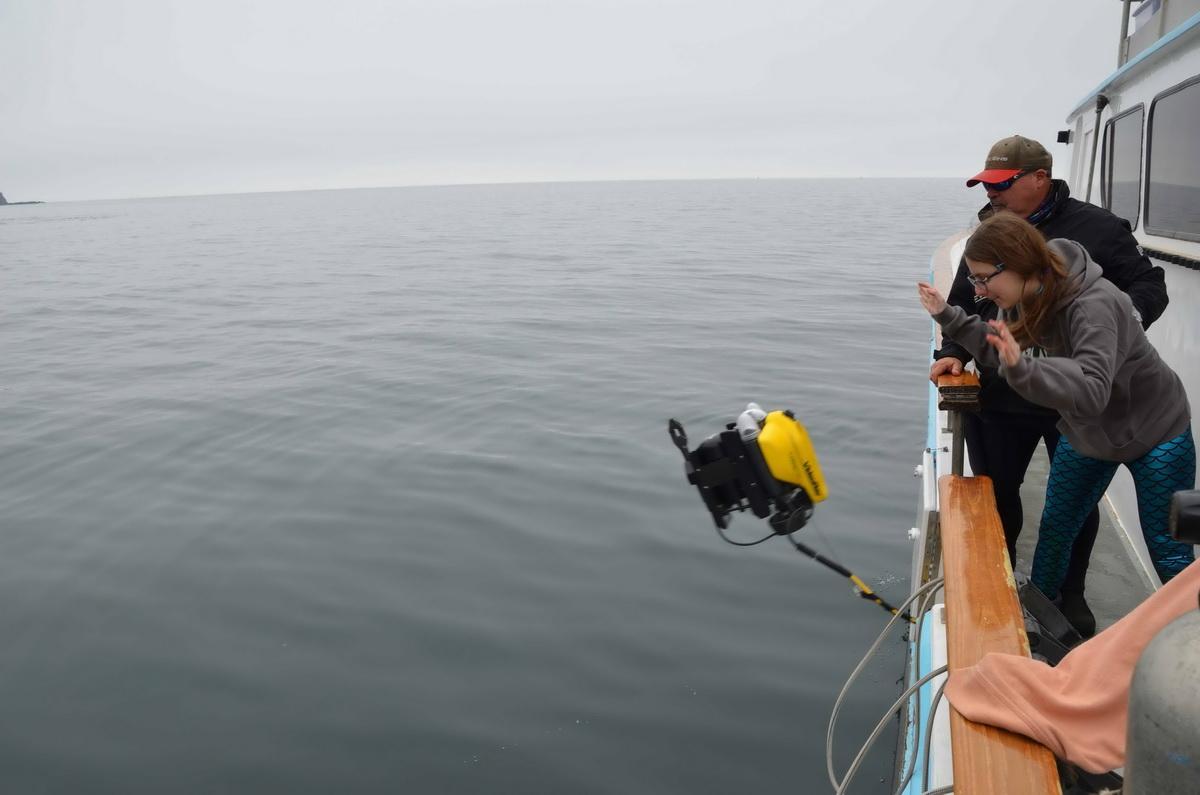 These machines had a cable that went from the vessel back to a computer in the galley of the boat. It is from there that the operators could manipulate the movement, in the X, Y, and Z directions. They can also record any information that they deem valuable.

The ROVs also have a mechanical pincher that can grab things the operator might want to bring back to the surface. The students successfully did this when they found a large mass of trap lines stuck on the bottom. They grabbed it and slowly hauled it back towards the boat. Here you can see that mess of trap lines. 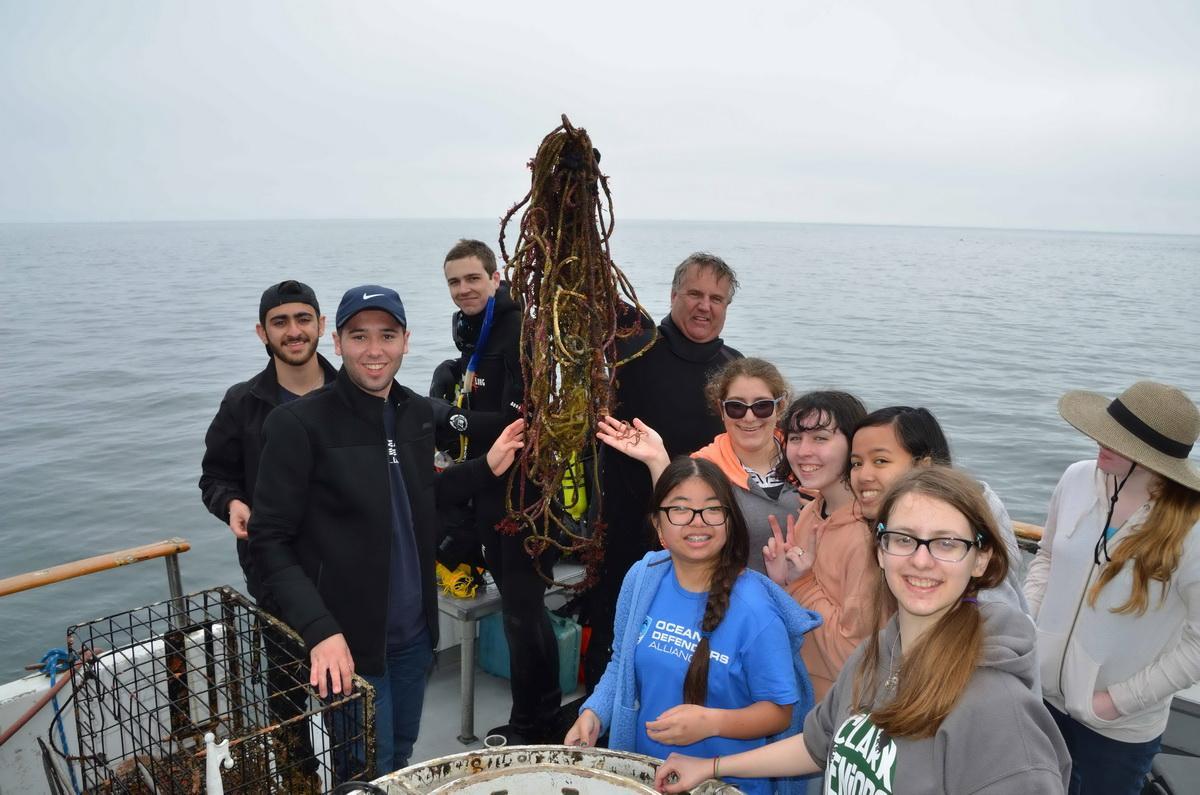 The dive team members were: Dominique Evans, Larry Fuller, Cara Fuller, Dan Harasty, Matt Harasty, Matt O’Brien, and Greg Sanders. Greg brought along his UW camera to document what they saw during their dive (see photo in gallery below). 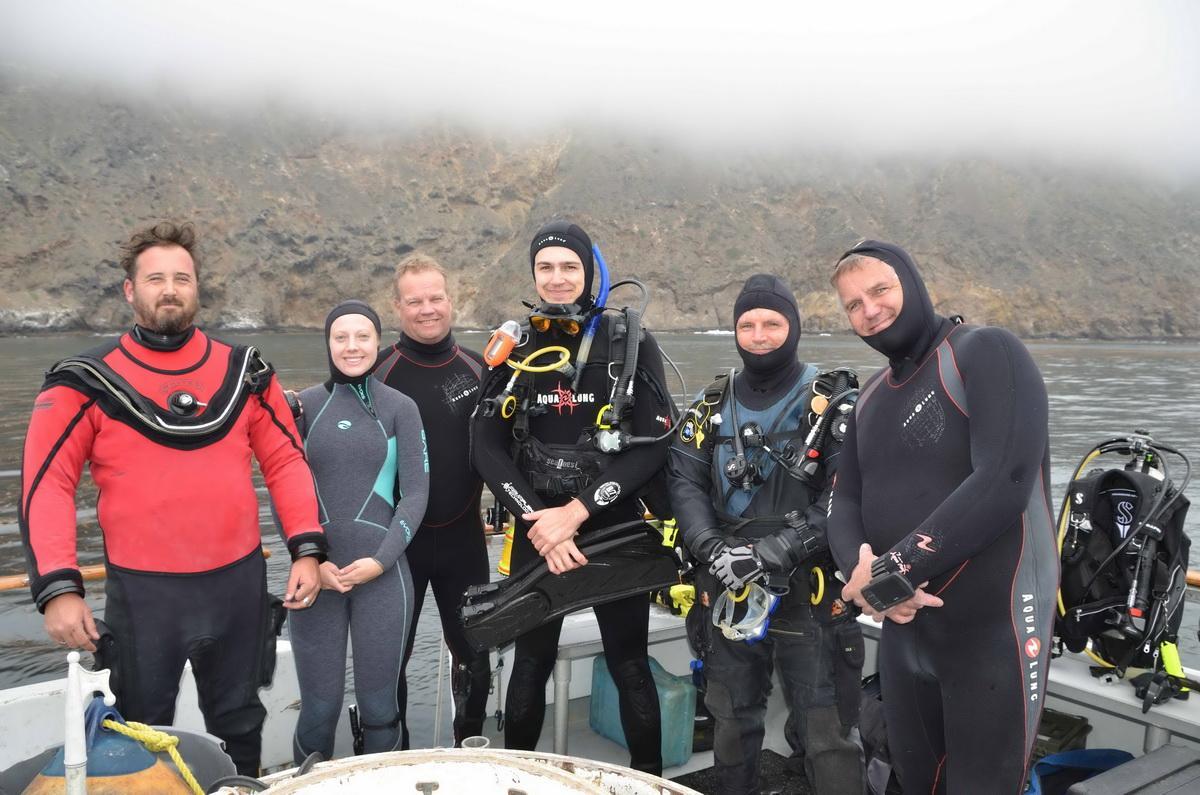 Shortly after the seven divers jumped in the water to search for any debris, they found two abandoned lobster traps, attached lift bags to them, and sent them to the surface. 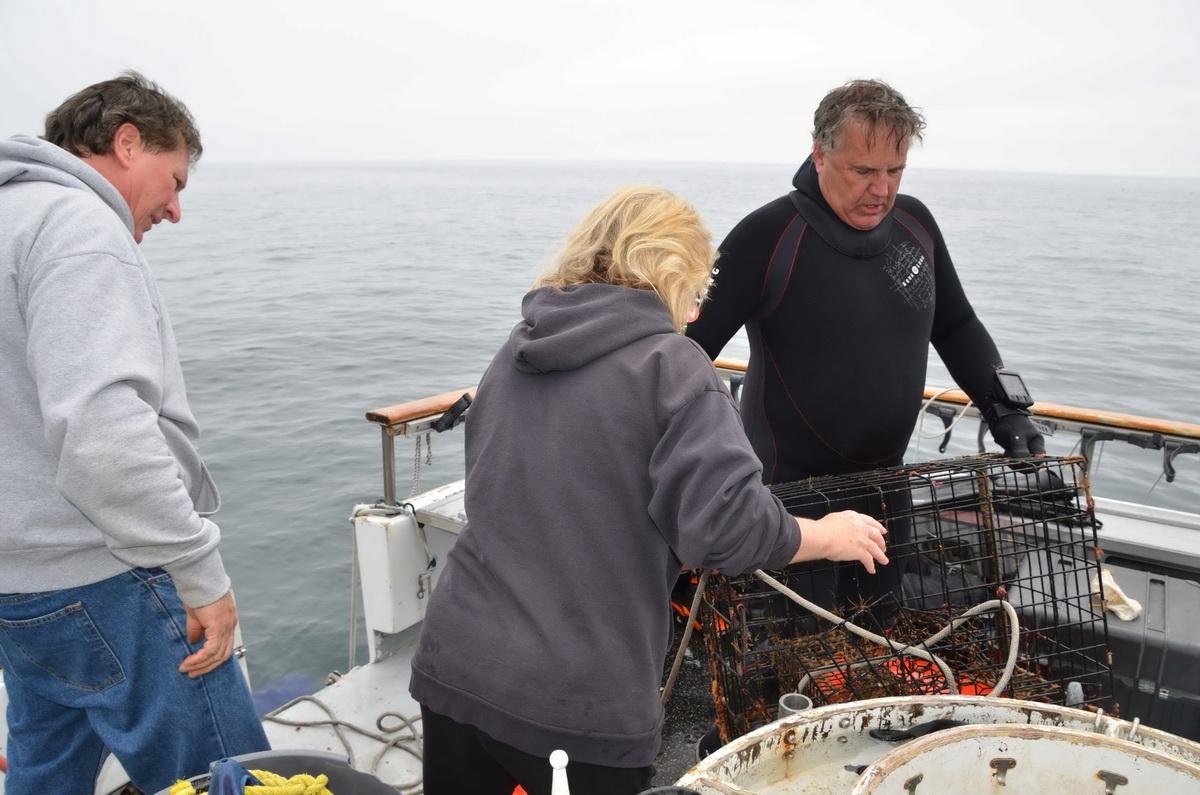 There were 12 students onboard from the school's Scientific Research and Environmental GIS classes. These kids took it upon themselves to go out on this mission on one of their days off from school. How cool is that! They were an absolute delight to spend time with, and three of them showed off their colorful “dive gear” just to add some sparkle to an overall spectacular day. 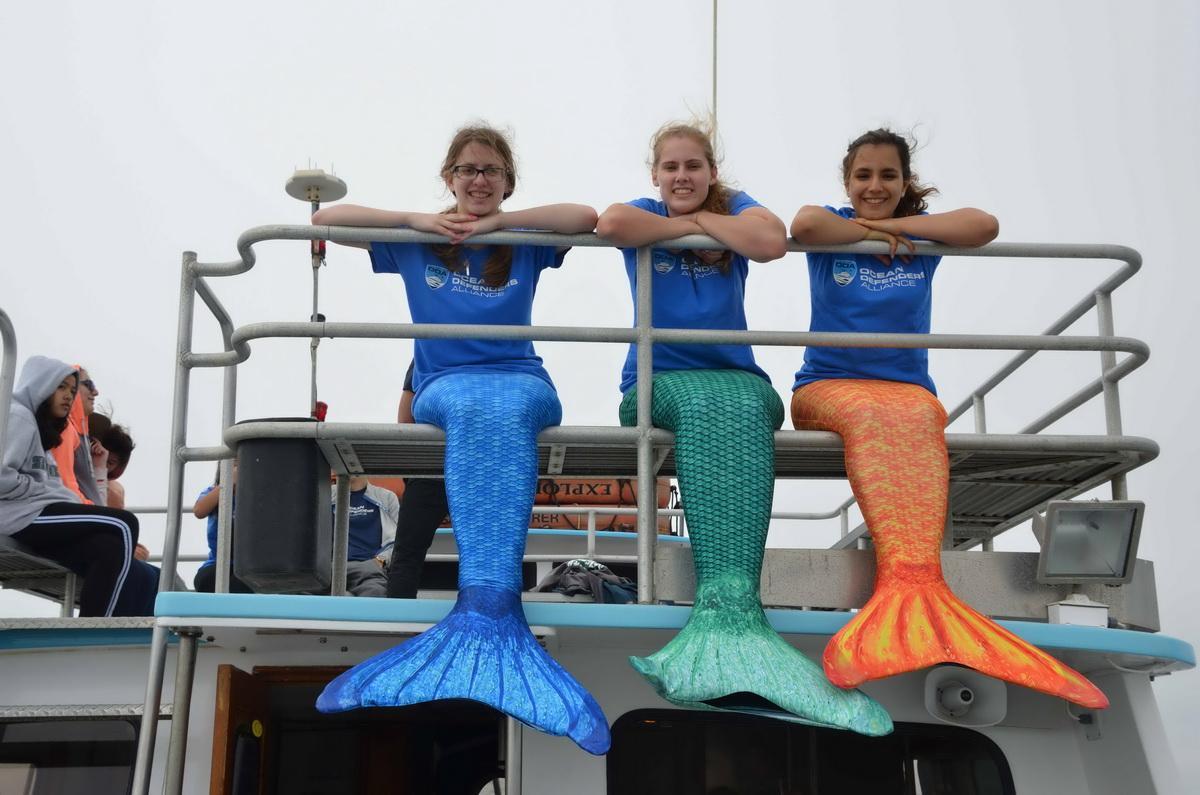 With young people like these out there wanting to do something to help our planet, I’d say our future is going to be filled with discoveries…and hope! Thank you to all you students, Dominique, and the volunteer divers from the County of Ventura’s Rescue Dive Team. 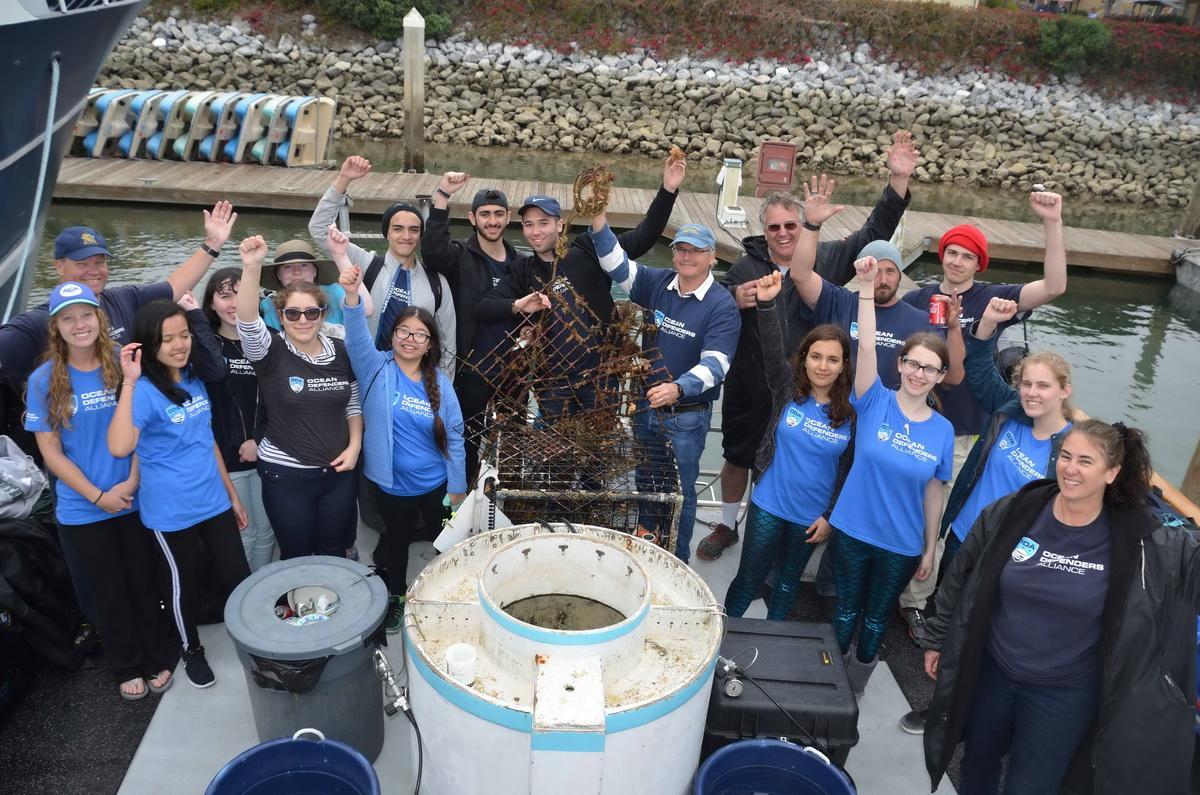 Not only did we enjoy spending time with you in the pursuit of ocean defense, we also had a pretty decent haul of debris: two abandoned lobster traps, trap remnants, and trap lines! ODA looks forward to continuing our partnership.