While hordes of people were settling down in their favorite easy chair to watch the big game, we had a strategic game plan: saving the oceans.

We headed out to scour the waters off Long Beach, CA, looking for abandoned lobster traps and nets.  Our ODA Volunteer Dive Crew was: Kim Cardenas, Jeff Connor, and Al Laubenstein; and Deck Crew was Lisa Davis, Brooke LaDoucier, and Jim Lieber. 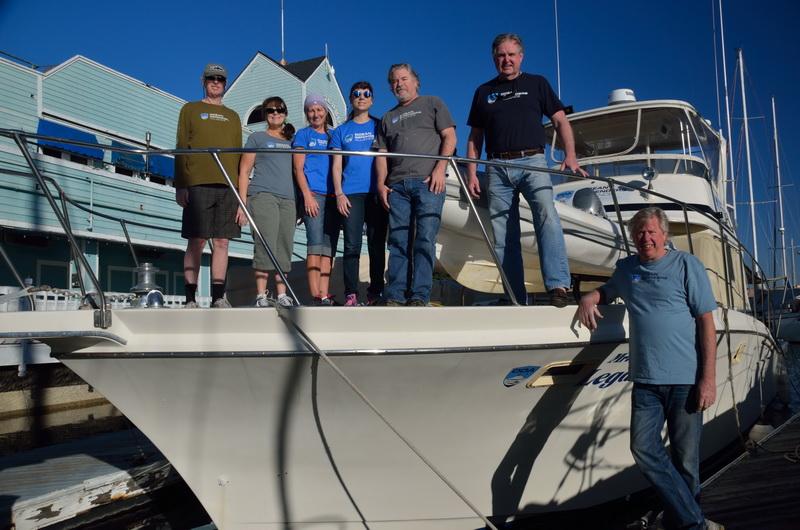 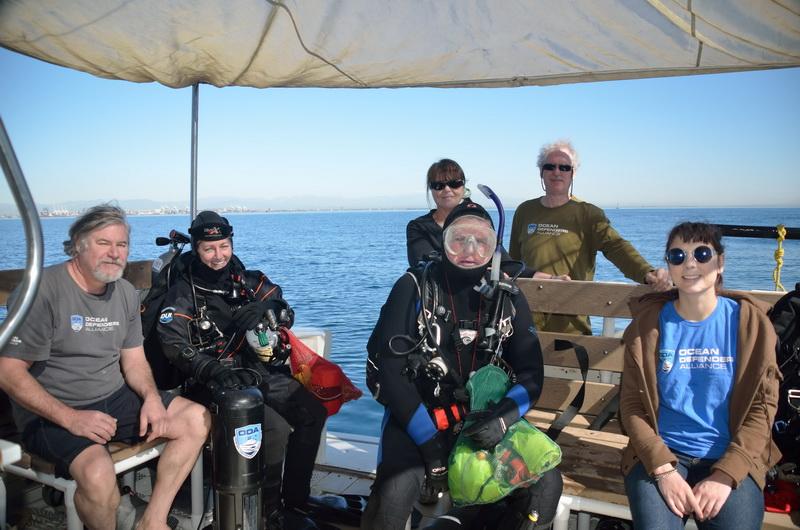 After having huge waves for the better part of December and January, we headed out under a bright sun, no waves at all, and the air temp just kept rising all day to 88 degrees.  This is February 7th mind you, and it suddenly seems that “winter” this year lasted all of two months.

We pulled up to a site we had investigated a few weeks ago that looked promising, but because the underwater visibility was so bad on that previous trip we had to cancel the dive after a few minutes.  This time Al, Jeff, and Kim dropped down into waters that were relatively clear, 15- 20 feet.  As soon as they hit the bottom, at 76 feet, they could see a pile of debris just 20 feet away from them.

While we were waiting on the back deck of Mr. Barker’s LegaSea we had a pelican stop by and see what we were up to.  We also saw dolphins and whales in the distance. 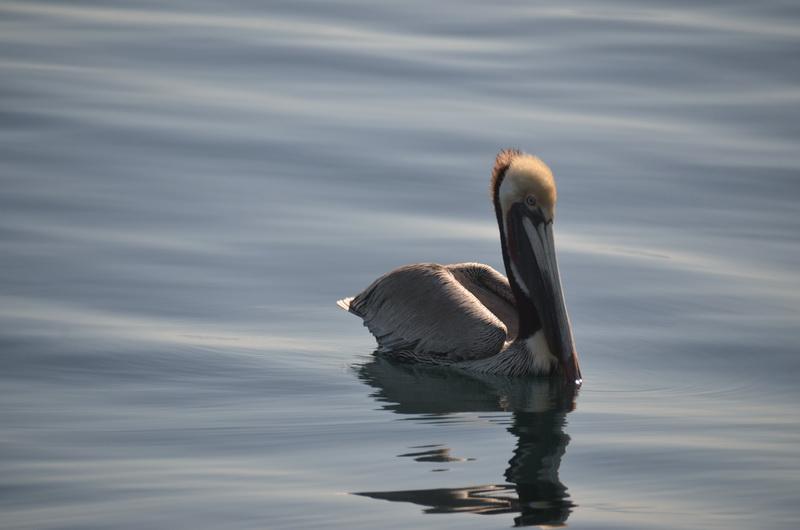 Within 15 minutes of the divers descending we saw two lift bags break the surface.  Five minutes later we saw another two bags.  Ten minutes after that, another bag surfaced.  SCORE!!! 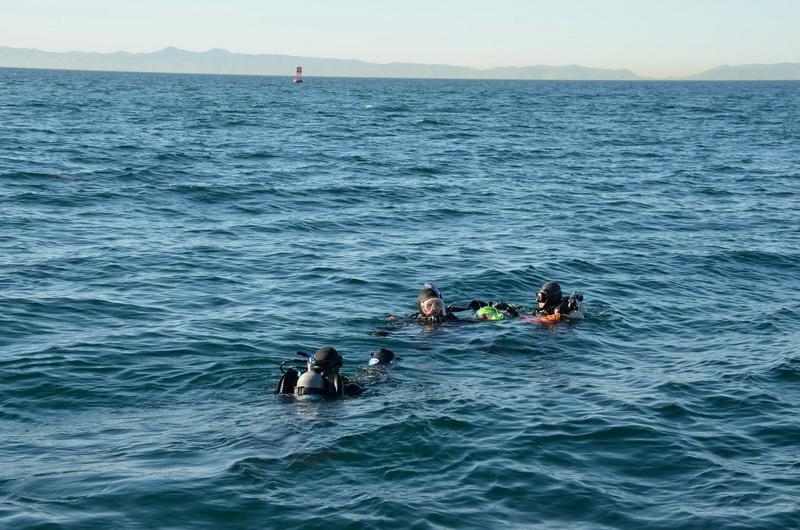 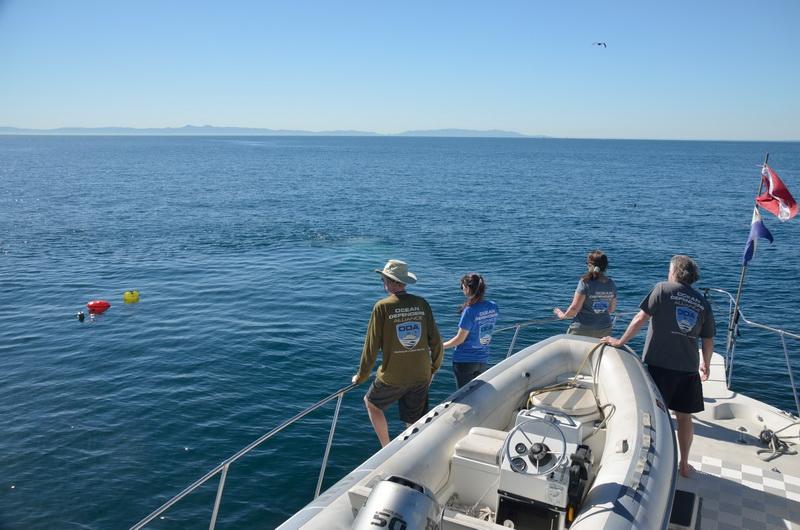 The Deck Crew is so happy that we have the very helpful hoist to mechanically lift the heavy traps out of the water. It saves our backs and muscles from significant grueling work (which we used to regularly do on our former boat Clearwater)!

As soon as the divers were back onboard, we pulled the anchor and started hauling the bags and debris up onto the front deck using our davit.  In total, we removed two abandoned lobster traps, 350 feet of trap lines, some trap debris, AND about 30 pounds of net.  ODA (and marine life) wins the day! 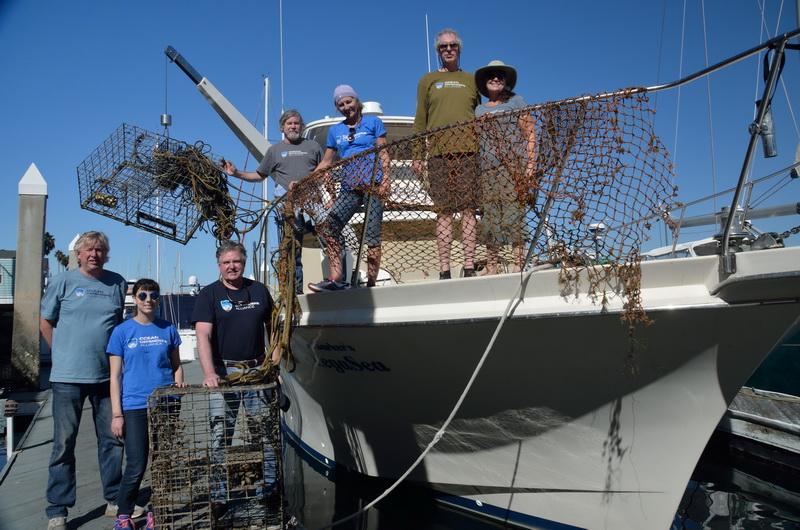 We’d have gotten more, but the divers were unable to go back down after their long time underwater.  To continue our Super Haul Sunday metaphor: Our divers were, in effect, benched due to physical limitations and unable to continue “playing.”

We’ll keep practicing, and will head back there for a rematch as soon as the next opportunity arises.

Thank you for making this ocean defense work possible.  You know that we could not do it without your support, and I hope you know how much we appreciate you being a part of the ODA crew.

It is never too early in the year to help ODA score BIG TIME for the ocean with your donation to protect ocean life and ecosystems...are you ready?

Take a minute to check out all the Super Haul fun!