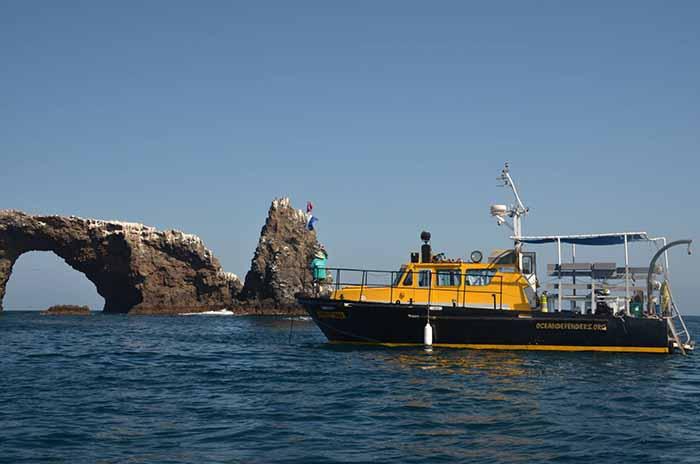 What a difference a week can make!  Last week, when we headed to Anacapa Island (one of the Channel Islands off the coast of Ventura County) to start removing abandoned fishing gear, we departed early in the morning under a dense blanket of fog.  This time, (Sunday, Sept 15th) we had clear blue skies and flat seas!

It was a glorious way to start the day, and along part of our transit we were escorted by hundreds of dolphins.  What a great way to begin any adventure, but especially one that would find five of our divers cleaning up debris from within a National Marine Sanctuary. 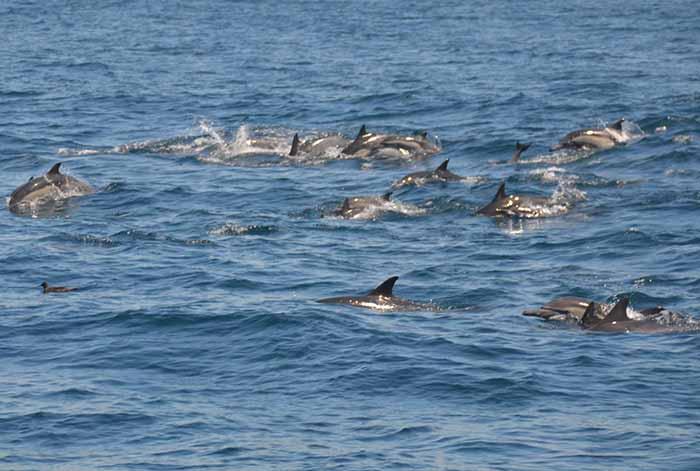 During the preceding week, I spoke with several local divers about potential areas that would be good places for us to hunt for abandoned traps.  Two folks with intimate knowledge of the area gave us GPS coordinates to sites that might have a heavy concentration of lobster traps set during the legal lobster-hunting season.  They don't want their names known, so we will call them crewmembers "Dolphin" and "Manatee."

We decided to put our efforts into an area that is a local landmark, and on a clear day, can be seen from the mainland: Arch Rock.  It is a geological marvel, and you can see firsthand the stunning beauty that nature creates when the fluid forces of the ocean pound the hard rock of land.

For our first dive, we anchored on the lee side of the rocks, at the eastern most side of the island.  As soon as I turned the engines off a cacophony of sounds took over.  Sea lions had hauled themselves up on some of the rock ledges, their barking resonating for miles as the sounds bounced off the cliffs.  It reminded me of what it is like to be in a grand concert hall, but instead of instruments or people singing-these were nature's raw, pure, wild voices! 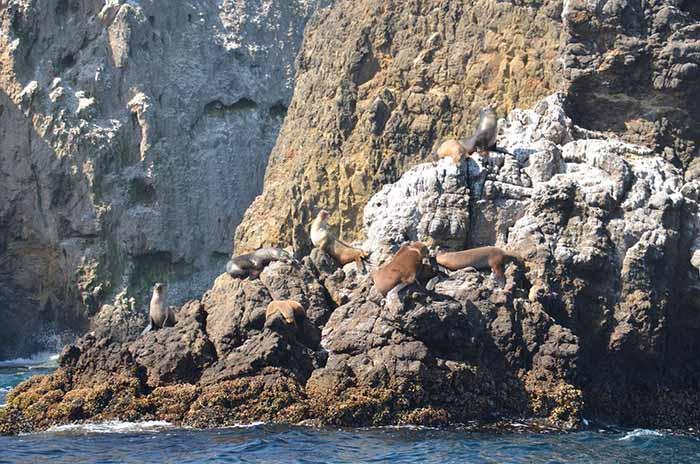 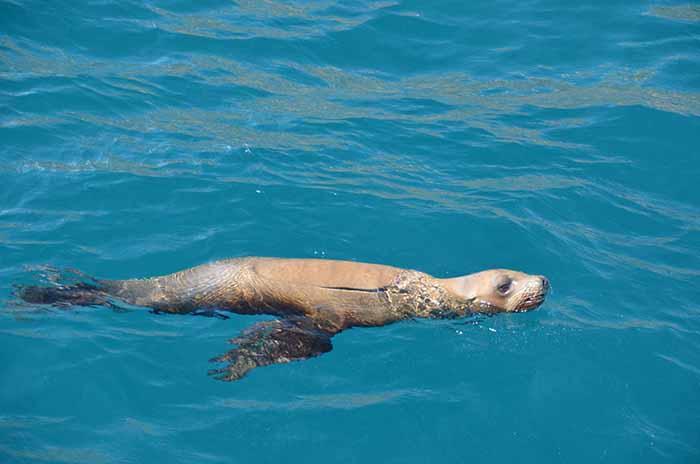 High above the cliffs we could see the island lighthouse, and just below that on the slopes that ran down to the water were hundreds of California brown pelicans.  During the course of the day we saw dozens of them take off for distant waters and then return en mass and settle back down on the same cliffs.  The Channel Islands are their only breeding area in Western North America, therefore, it is very important to keep this area clear of debris and thriving. 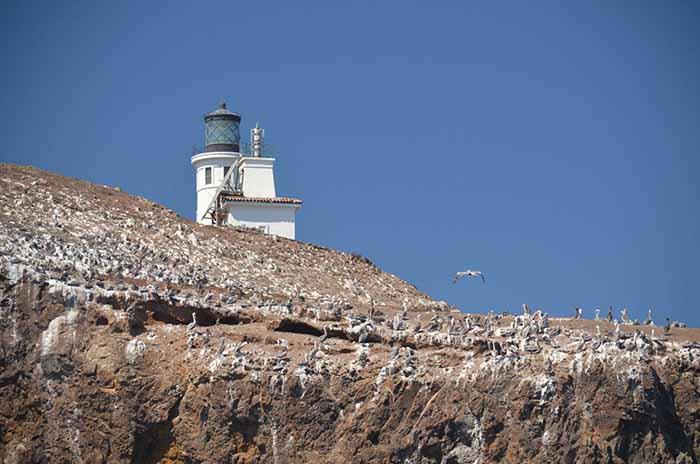 Swimming all around our boat were hordes of curious sea lions, and occasionally we'd see a harbor seal pop its head up to check us out.  In the tidal zones, we could see oystercatchers, with their bright red beaks, pecking out little crabs and snails.  In short, or maybe (because I'm trying to paint a picture with words here) not too short, this is an area of high biological diversity.

OK, OK Kurt…now, what's going on in the water?

The divers this day were Billy Arcilla, Jeff Connor, Rafael Augustin-Delgado, Peter Fulks, and Trevor Fulks.  In addition, handling everything on the decks, we had Jon Davies, Lisa Davis, and Jim Lieber (1st mate). 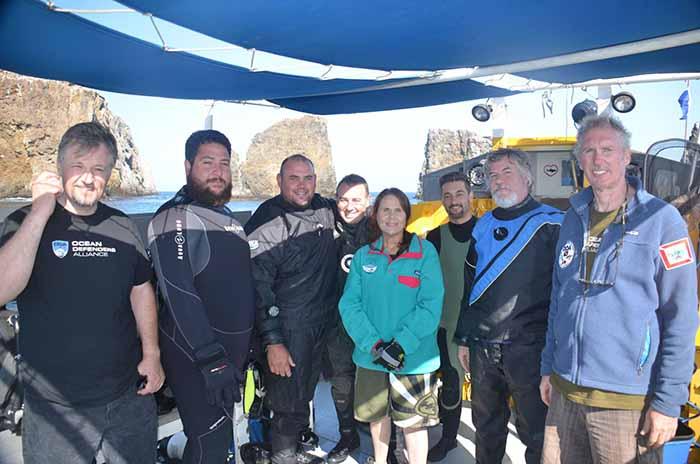 The conditions were ideal on the south side of Arch Rock.  Calm waters and good underwater visibility.  Peter and Trevor formed one team, and took off using two of our underwater scooters.  Billy, Jeff, and Rafael headed off in a different direction.  About an hour later, Peter and Trevor sent up a lift bag.  Jim and Billy hopped into our zodiac to see if they could tow it back to our flagship Clearwater.  After a ten-minute struggle, they came back to the boat empty handed. 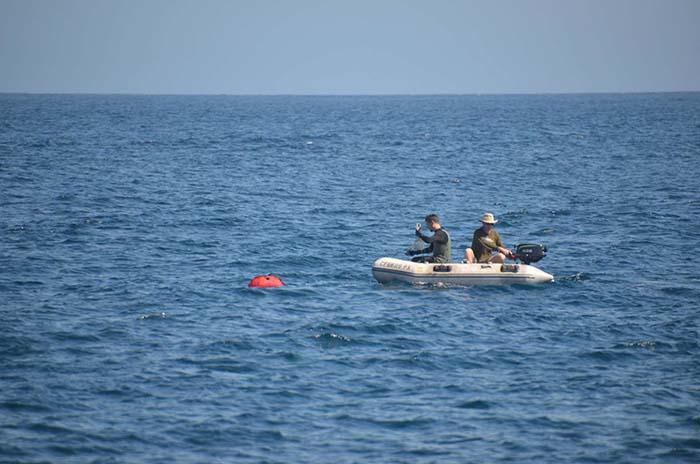 When Peter and Trevor got back on the boat, we went to retrieve the lift bag and were treated to a nice surprise: there was a HUGE trap attached to it. No wonder Jim and Billy weren't able to tow it; it was also too unwieldy for our little Zodiac motor to haul.  However, we've not met a piece of marine debris we couldn't handle, so we got it on the boat and realized it was one of the largest traps we've ever encountered. 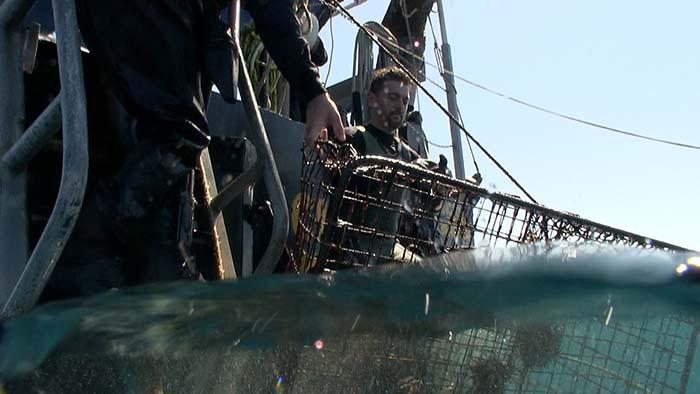 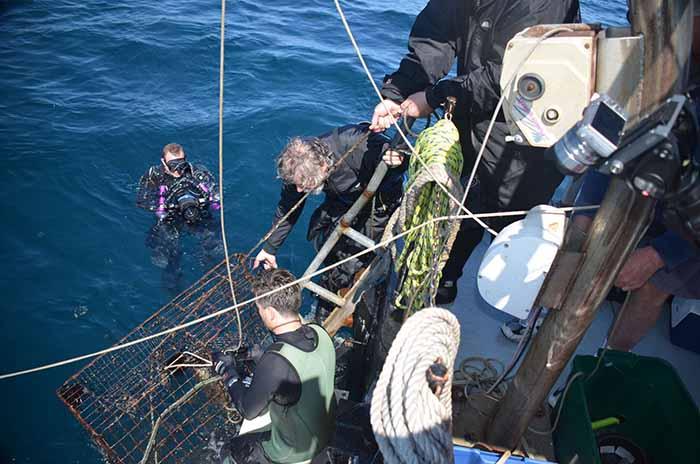 After eating lunch on the deck of the boat, we decided to head to the north side of Arch Rock.  Things were a little different there; the seas were surging against the rocks-forming swirling whitecaps all around us.  I decided to let only Pete and Trev go in, because they can stay down for longer periods of time with their double tanks, and they know how to use our scooters.

After what seemed like forever to those of us waiting on the boat, we saw two lift bags break the surface.  By this time the seas were really becoming an issue, and as soon as the guys surfaced I suggested that they scooter over to an area that was a lot more calm.  They did that and (as always) we got them aboard with no problems.

Pete and Trevor's eyes sparkled like diamonds while they told us about a once in a lifetime encounter they had.  While they were looking for debris, they were treated to a sight rarely seen: 10 or 11 giant Black Sea Bass!  These animals were hunted to near extinction in the 90's before it was made illegal to intentionally kill them.  These are one of the largest fish we have in California.  They can grow to over seven feet long, weigh about 560 lbs, and can live to almost 100 years old.  It is a testament to the value of National Marine Sanctuaries and Marine Protected Areas that so many of these large fish were found together.  Yippee! 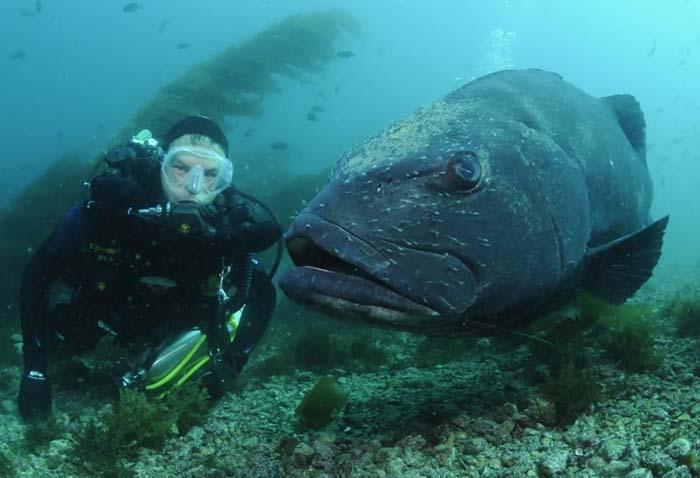 These animals (black sea bass) were hunted to near extinction in the 90's before it was made illegal to intentionally kill them.

Unfortunately, the guys didn't have their camera with them. Since we didn't get any pictures of it, I am sharing a sample picture to show you how big they can get!  We need to purchase a small camera that the divers can strap onto their heads, so when they are in "working mode" we can still get images.  They won't be great shots, but something is better than nothing…

We then motored over to one of the lift bags to grab it and bring the load onboard.  The bag was hanging really low in the water, which indicated that there was something heavy on it.  Because of the heavy seas we had one heck of a time hauling it in.  But we did get it, and no one got hurt.  Turned out to be a trap weight bar that had to weigh almost 100 pounds!

We then started to look for the last lift bag, but because of the swift currents, it was nowhere in sight.  So, I followed where the currents were going and we found it about a half-mile from where the guys had originally sent it to the surface.

As soon as we got everything secured on the deck we headed back to the mainland.  By now the seas were absolutely frothing.  We slowly made our way north toward Oxnard at seven knots, with four-foot swells hammering our port side.  It was quite a ride.  We were again treated to several schools of dolphins, but they were in hunting mode and we were in "get our butts home safe" mode.  So we didn't spend any time with them.

In all, we hauled in one massive trap, more than 200 feet of polypropylene trap line, and about 130 pounds of trap remnants.  The only casualty was the refrigerator, which got busted up when it fell to the floor during the rock'n'roll ride home. 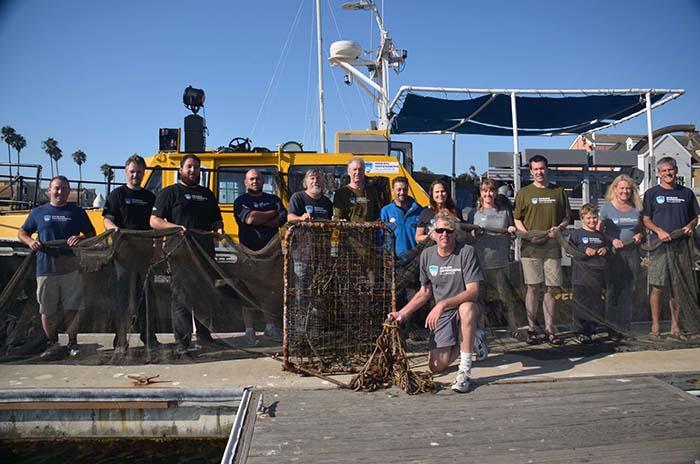 This was our second time going to Anacapa Island.  If the weather is on our side, we'll return again next weekend.

If you have been holding back, perhaps waiting for "just the right moment" to make a financial donation in support of ODA's work…believe me: this is a great time to do so.  We hope to operate in the Channel Islands through October, and have lots of debris removal work to do in our home area upon returning there, so this is the perfect time to donate!

Thank you for your interest in and support of the important work of Ocean Defenders Alliance.