Taming a Beast of a Net

Ocean Defenders Alliance's new website provided additional value to marine life recently, bridging the gap from educational tool to operational asset.  Last month, we received our first debris report (from Douglas Fay) through this new online system.  He had seen a net while diving off of Marina Del Rey, and immediately went to ODA's site and filled out our "REPORT DEBRIS" form. 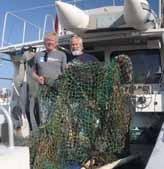 Since the location was so far from our vessel the Clearwater's dock, I called a friend of ODA's, Jim Simmerman, to see if he would be willing to take some of our divers out to survey the site.  He owns the dive boat , and has helped us out on several occasions in the past.  Jim didn't hesitate to help!.

On Friday, November 2nd, Graham Futerfas, Shingo Ishida, John Krieger, Steve Millington, and I met up and donned our gear even before the boat left the slip.  The reported location of the net led us to believe that we would find a significant amount of net just on the outside of the breakwall to the Marina del Rey Harbor.  Douglas told us we would find it "where the sand meets the rocks," in about 25 feet of water.

We were fortunate this day in that the currents were almost nil and we no problem getting close to the breakwall.  Usually this would be treacherous with any kind of wave action, but Jim was able to back the boat to within 100 feet of the rocks and all 5 of us jumped in.

Because this was a scouting dive, we broke up into two separate teams.  John and I headed south, while Graham, Shingo, and Steve headed north.  Visibility was reasonable at 15-20 feet.  I was pleasantly surprised to see a proliferation of life here.  The breakwall consists of huge rocks that were placed here to break up the waves before they enter the harbor.  The rocks provide habitat for a nice variety of fish, lobsters, and crabs. 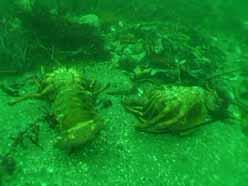 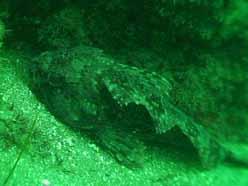 This is apparently a prolific area for lobsters as well.  I saw over a dozen lobster molts scattered on the sand.  I was also surprised to see a lot of very large sand bass.  Usually they are small, less than two pounds, but I saw quite a few in the four- to five-pound range.  There were also some areas that were carpeted with beautiful gorgonians (also known as sea whips or sea fans).

Then we came across an abandoned hoop net trap.  These are used by recreational fishermen to catch lobsters.  This one had two dead lobsters in it.  John and I spent a good amount of time removing it and attached a lift bag that we filled with air and sent it to the surface.

When we surfaced we saw that Graham, Shingo, and Steve had sent up a lift bag as well.  We swam over to it and started pulling it to the boat.  There was a significant amount of net attached to it.  We eventually got it to the boat and hauled it aboard.  Then we saw another lift bag surface.  The guys surfaced and towed it to the boat.  In all, we hauled up about 100 lbs of net!

When they got back aboard they told us that they had found a bunch more net down there.  So, we took a one-hour surface break and headed back down.

Since I was shooting video, I went down first, visibility this time was cut in half, to about eight feet.  Almost immediately, I saw a huge, jumbled pile of net and PVC piping.  At first I had no idea why all the PVC was there, but then as I took a closer look I could see that the net was attached to the pipes.  At one time this was a fish cage for the live bait fishermen like to use.

A minute later, the other divers arrived and broke up into two teams.  They worked from each end of the pile so as not to get in each other's way.  That essentially was the last time I saw them.  As soon as they started cutting and pulling the visability went to ZERO!  The only parts of any of them I could see were their fins.

For the next 15 minutes I hovered around this black cloud that hung over the site, about 20 feet in diameter and rising eight feet of the bottom.  At one point, I was filming someone's fins that were vertical in the water, my fellow diver was literally standing on his head while he cut net.  I filmed that but as soon as I reached their ankles I could see nothing else but that black cloud of silt. 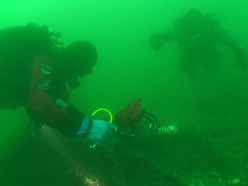 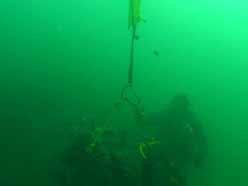 John, Shingo, and I climbed aboard the boat, took our dive gear off and started to wrestle with this twisted mess of net, pipes, anchors, and chain.  Steve and Graham stayed in the water and added another lift bag to lighten the load.  After much grunting and groaning we had it secure on the rear deck. 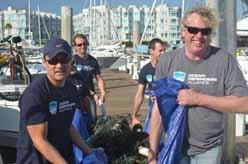 As we hauled the mass of net off Jim's boat, the Giant Stride, it became even more apparent that this was a large haul.  I estimate that it weighed 500 to 600 lbs in total.  I always feel a sense of relief whenever we do this, not just because we all get back safely, but also for all the critters that won't get caught in the net and have to die a slow, senseless death.

Thanks Jim Simmerman, for taking us out and donating your time for the day.  Accolades to Graham, Shingo, John, and Steve for giving up a day of your lives to make sure that others may live.

To see all the pictures from this dive, please visit our Facebook page!