Early on the morning of July 5th, while most people were relaxing in bed and recovering from their 4th of July celebrations, ODA had a boat full of exuberant ocean lovers who were raring to go hunting…for traps.

We loaded up the boat with scuba tanks, wetsuits and drysuits, underwater scooters, and the smiling faces of eight folks ready for adventure.  This time we headed to the backside of Anacapa Island.  Danny Black is a ranger for the Channel Islands National Park Service who spends lots of time patrolling the waters off of Anacapa.  He suggested that we look at an area called Cat Rock, and go close to shore, in about 15 to 35 feet of water.

The divers this day were: Kevin Augarten, Chris Bell, Jeff Larson, Peter Fulks, and Trevor Fulks.  On deck were Trent Gould, Dave Sperling, and myself. 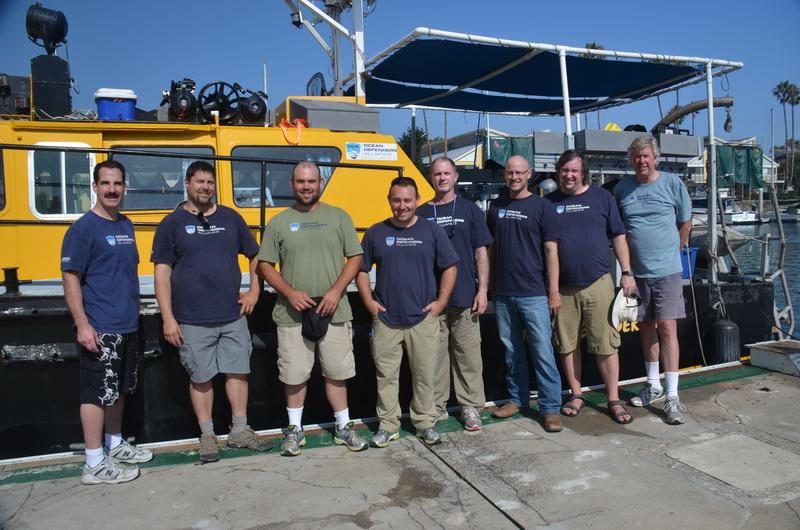 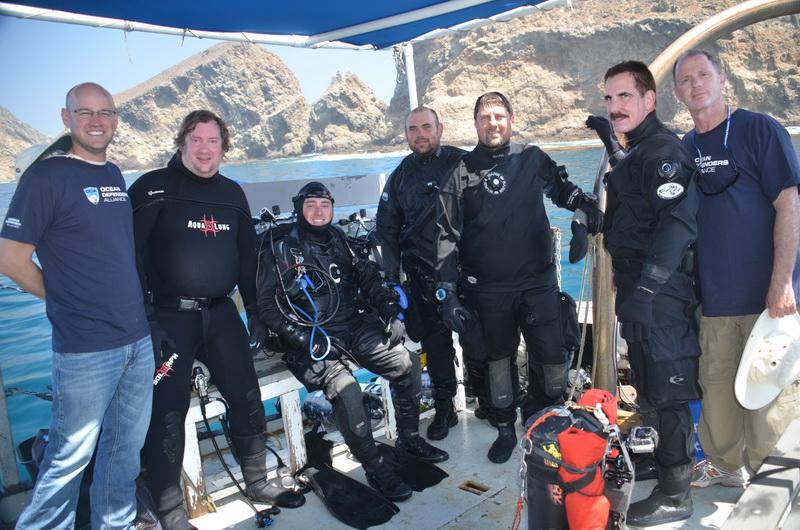 The 11-mile ride to the site was fantastic: no waves, and the seas were almost like glass.  We did see a huge freighter about two miles away from us, and it left a 4-foot high wave that some dolphins took advantage of and surfing on for miles.  Some of them were leaping 10 feet out of the water and doing somersaults! 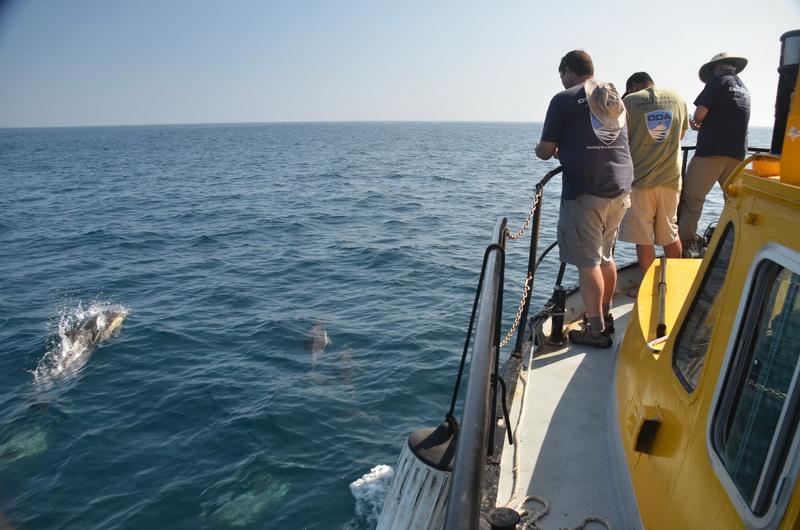 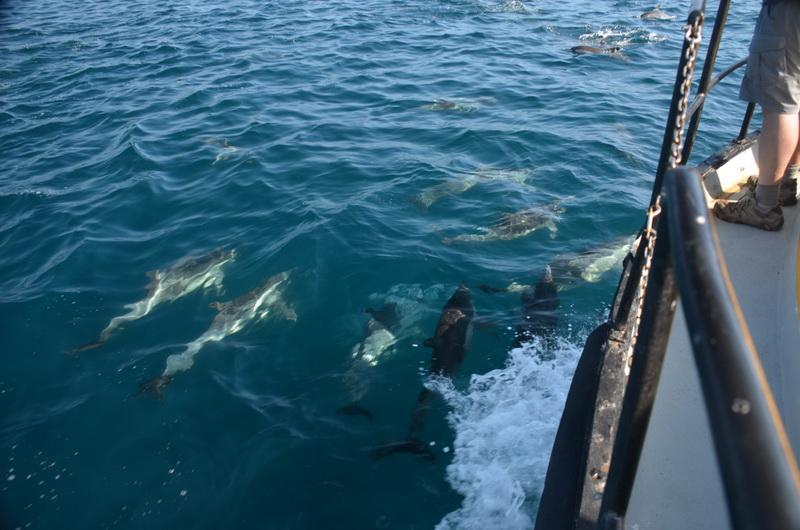 Dive conditions turned out to be just as nice, no current, 30-foot visibility, and the water temperature was around 64 degrees.  We handed the suited divers their cameras, lift bag, and scooters, and after a few minutes of them checking that all of the gear was in working order, off they went into the deep blue yonder. 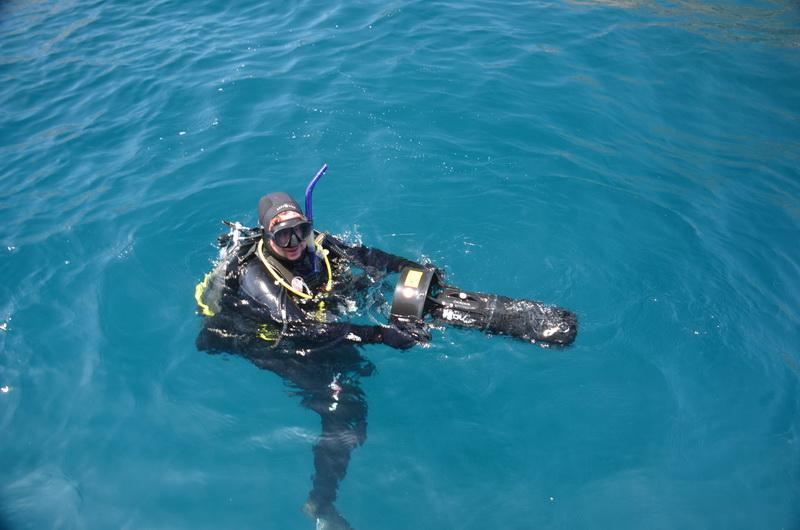 The dive crew broke up into two teams, (Peter with Trevor, and Kevin with Jeff) with one team scootering in the 30 to 40 foot range, while the other team took the shallower areas.  Chris had issues with his gear so he stayed close to the boat while he got things figured out.
After an hour both teams returned to the boat.  Even though they didn't find any abandoned traps, it still adds to our database and now we know not to return to this spot until next year, after the end of lobster hunting season in March.

We did a surface interval (required for the safety of the divers after spending time under water) and everyone ate lunch.  The second dive utilized the same teams, but this time they headed east from the boat.

Chris decided to just dive around our boat and do some filming.  Did that ever turn out to be eventful!  He saw 4 or 5 giant Black Sea Bass, and they were looking at him as intently as he was them.  One of them was definitely an adult, at 5 feet long and something like 300 pounds.  The others were juveniles in the 2-3 foot range.

Another 40 minutes passed and when we started to see lift bags break the surface, a good 200-300 yards away.  Thank you Bob Barker for those scooters! Divers would never be able to cover that type of ground just using their fins.

We got the divers onboard and then headed out to retrieve the lift bags.  There were two abandoned traps on them, along with 140 feet of trap lines.  The kind of lines that whales and dolphins too often become entangled in, and they are estimated to last 450 years in the ocean. 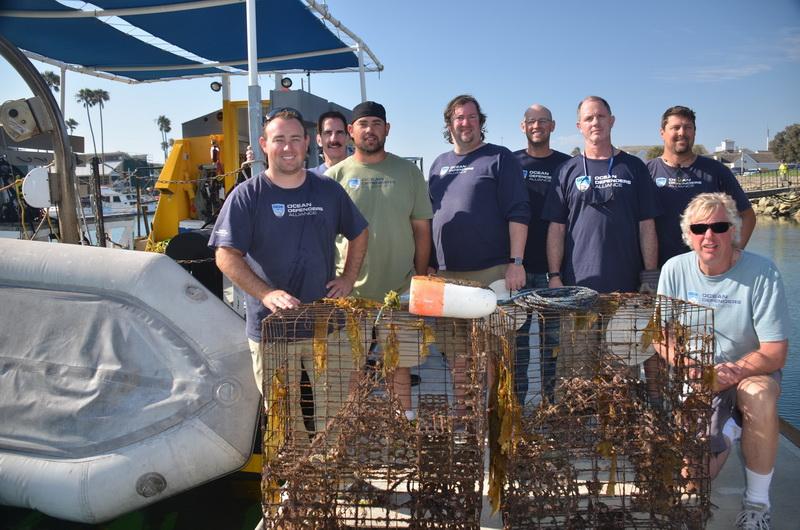 As we headed back to our home port, the seas were pretty much the same as they were on our morning run, with nary a ripple on the surface.  Trevor spotted a Mola Mola near a patch of floating kelp, so we stopped to have a look at one of the most bizarre creatures nature has ever created.  As we started to move away we were greeted by a large pod of dolphins.  So we motored along at 7 knots and let them have fun while they rode the bow and the wake we left behind.  Everyone grabbed their cameras and enjoyed the spectacle.

Before we left them, after 15 minutes, there were hundreds of them around us!

It was quite a refreshing way to end another great day of helping our friends in the ocean by removing any man-made debris we find.  The critters around Anacapa Island are breathing a little easier today thanks to our dedicated volunteers and supporters.

We invite you to check out the entire gallery of photos from this day's expedition!