Thanks to the flight I was able to take last week, during which I searched southern California’s coastal waters for high concentrations of legally placed lobster traps, I decided to focus on a site called Pt. Loma.

Pt. Loma sits at the entrance of San Diego Harbor.  It’s a landmark known to just about everyone in San Diego and there’s a picturesque lighthouse at the base of the point.  On my recent flight I noticed what looked like thousands of traps set just off the coast in a huge kelp bed.

To investigate, I grabbed our small RIB off the LegaSea, put it on a trailer, and headed down to San Diego to document what I could find out about trap density on the water. 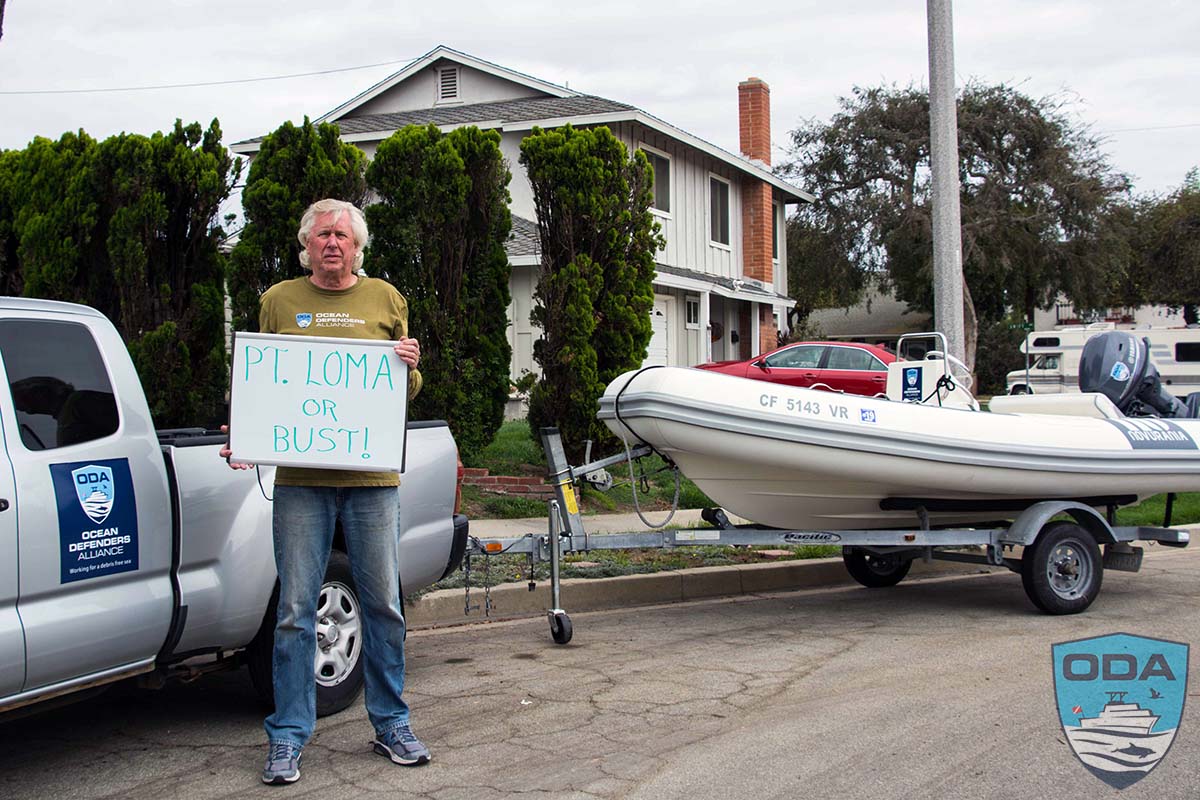 On Tuesday, Oct. 20, I launched the boat at a public launch ramp and motored for 2 hours down to Pt. Loma.

From the moment I exited the harbor I saw trap buoys. The traps were not set close together, so I didn’t stop to get the GPS numbers for them because I didn’t feel these presented a significant whale entanglement threat.  That all changed when I got to the kelp beds off Pt. Loma.

It was a beautiful day on the water, with blue skies and flat seas.  Geez, I could get used to this!

The kelp beds there are just amazing - with kelp fronds lapping at the surface and offering priceless habitat for marine animals. I could see kelp plants going out at least 3 miles from shore, but because I was by myself, I didn’t want to go out too far, so I went no more than a mile offshore.

I started getting the GPS numbers as soon as I felt the traps were set 100 feet apart or less.  This is where we fear that whales have an increased chance of becoming entangled.  I’ve seen whales swim right through kelp beds.  They seem to use the kelp to rub parasites off themselves, and the kelp beds offer safer passage for their babies because it is harder for killer whales and sharks to find them there.

The gray whale migration starts around early November as they head from their feeding grounds in Alaska down to the lagoons of Baja, Mexico.

There were trap buoys as far as the eye could see, so I picked a route about 400 yards from shore and kept heading south until I got to the end of Point Loma, where there is a lighthouse. 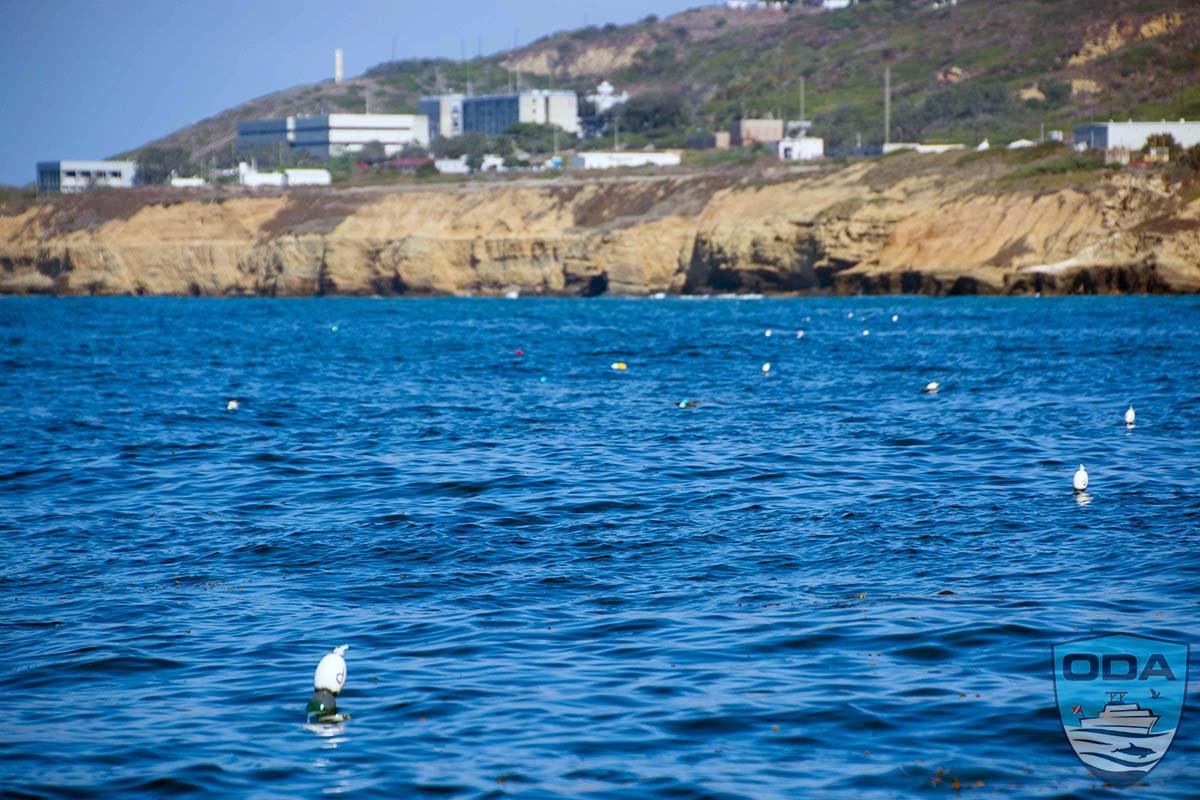 At that point I turned and made my way about 100 yards closer to shore and started heading north to track a parallel path.  As soon as I had the boat turned around, I could see the trap buoys much easier.  It was like going from a black and white movie to Technicolor!  I had been looking into the sun the entire way down, but when I turned the boat around I had the sun at my back.  It made a huge difference.

I quickly saw traps set in a straight line, about 200 yards from shore.  Then I looked at the GPS unit, and it had stopped working.  Oh, GREAT!

I put in new batteries, but I couldn’t get it to work anymore.  So, I headed back to Mission Bay.  Frustrated, but still determined to go back once I got the thing working again.

On my way back to Mission Bay I had time to take in the sights and shoot some photos.  One thing I noticed, besides the beautiful cliffs, were areas of the shore lined with huge boulders and rocks.  These are put there to try to stop the seas from eroding the cliffs. 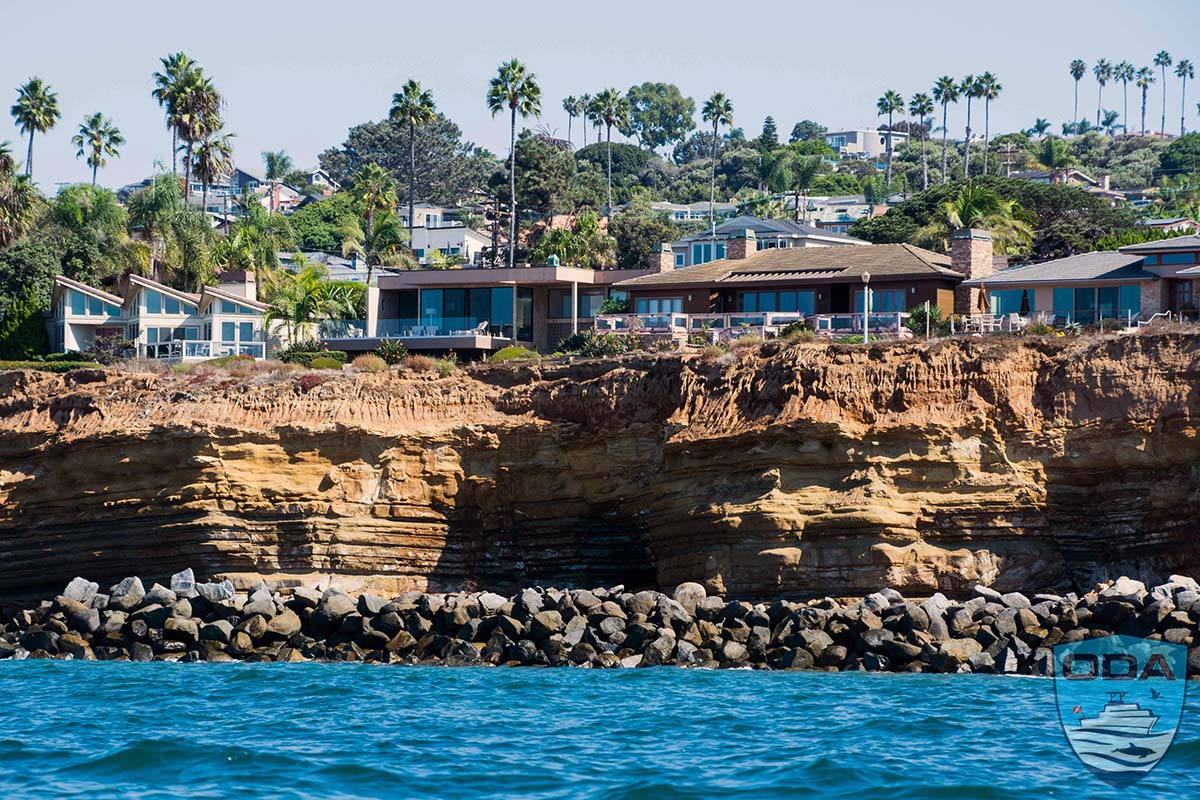 Of course, the real reason is to prevent the million-dollar homes from crashing into the ocean the cliffs crumble.  This is a crisis that the entire planet is facing as the sea levels keeps rising.  Good luck with those rocks people.  You can’t stop Mother Nature, no matter how hard you try!

Sure enough, when I got back to my hotel I put another set of batteries into the GPS unit, it worked like it was supposed to.  It turns out that I didn’t put the batteries in correctly.  Because it was so bright out on the water, I couldn’t see that I was putting them in in the wrong direction… Sheesh. What is it they say about the best laid plans…?

The next morning, Tuesday, Oct. 21st.  I put the boat in the water at the public launch ramp at Shelter Island, which is right near downtown and a heck of a lot closer to Pt. Loma.  In fact it only took me 50 minutes to get there from the ramp.

It was another great day on the water, but this time it was all cloudy.  Which didn’t bother me a bit because I was kinda’ sunburnt from the bright skies the day before.

As I was motoring out, I was treated to the sight of hundreds of Cormorants furiously beating their wings just above the surface of the water.  They were heading out to the kelp beds to feast on fish.  I thought to myself, where were they all coming from?  I had no clue. 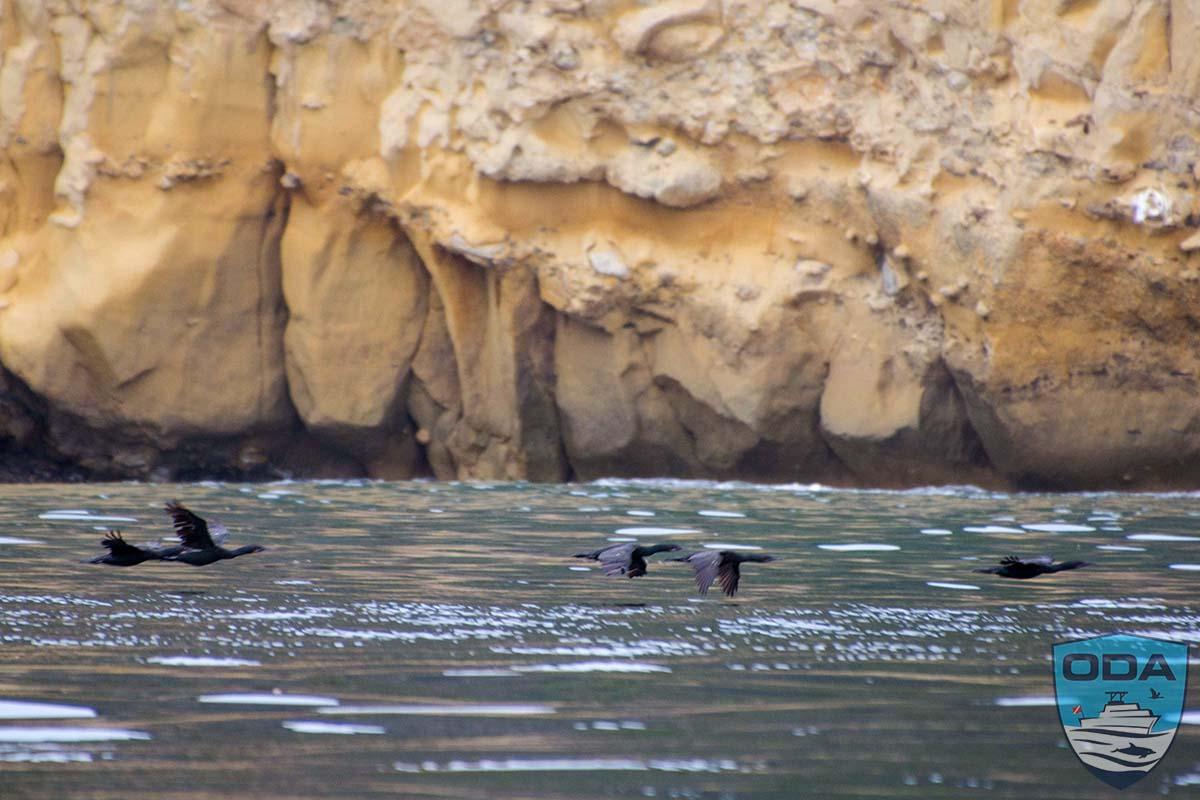 When I finally got to the place where I had spotted that line of traps the day before, I started documenting the trap locations again.  That string of traps ran north for about a mile.

Once I reached the end, I headed out to sea a little further to make a parallel path back towards the lighthouse.  I made sure not to cover the same ground that I had the day before.

Once I got back towards the lighthouse, I saw that there were more traps set around the entrance to San Diego Harbor, so I kept on marking those locations too.

In all I marked the locations of 149 traps on Tuesday, and another 301 on Wednesday.  And trust me, there are more than 5 times that amount out there uncounted.  I saw lobster boats working 2-3 miles offshore.

As I was heading back to the launch ramp I saw hundreds of Cormorants returning from the kelp beds.  This time I decided to see where the heck they were going.  Then I saw it, an area where thousands of them were perched.  They were meeting with all their friends at a bar, a bait bar. 😉  There were over a hundred sea lions, a few fur seals, pelicans galore, some kingfishers and snowy egrets. 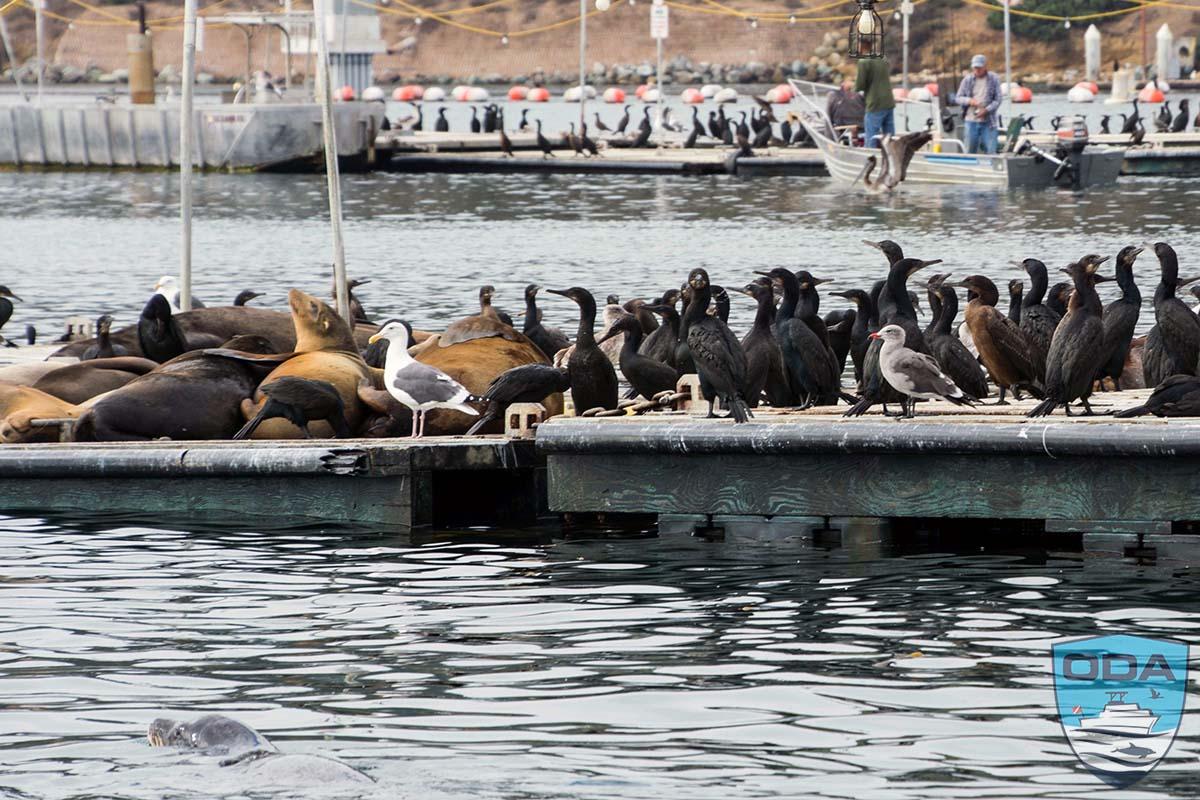 It reminded me of that scene in Star Wars, where all the aliens from all over the universe got together to party.  Belly up to the Bait Bar!

Stay tuned for more information on our plans for using all of this data in defense of marine life.