Two-Year Anniversary of a Partnership Made in Ocean Heaven

The story of ODA’s partnership with Island Divers is quite a happy one.

And one we were able to recently celebrate!

How It All Began

ODA started partnering with Island Divers Hawaii (IDH) on April 29, 2017, to perform underwater cleanups on the south side of Oahu.  Our very first dive with them found us with 10 volunteers out on their boat – yahoo!

IDH is owned and operated by Matt Zimmerman.  The shop is located in a town called Hawai’i Kai, which is on the south/west side of the island.  Long-time employee Mary Christensen is a dive instructor for IDH, and she had organized a few underwater cleanups in the past. When the ODA/IDH partnership was launched, she was thrilled at the prospect of working with ODA and being able to do these cleanups on a regular basis. 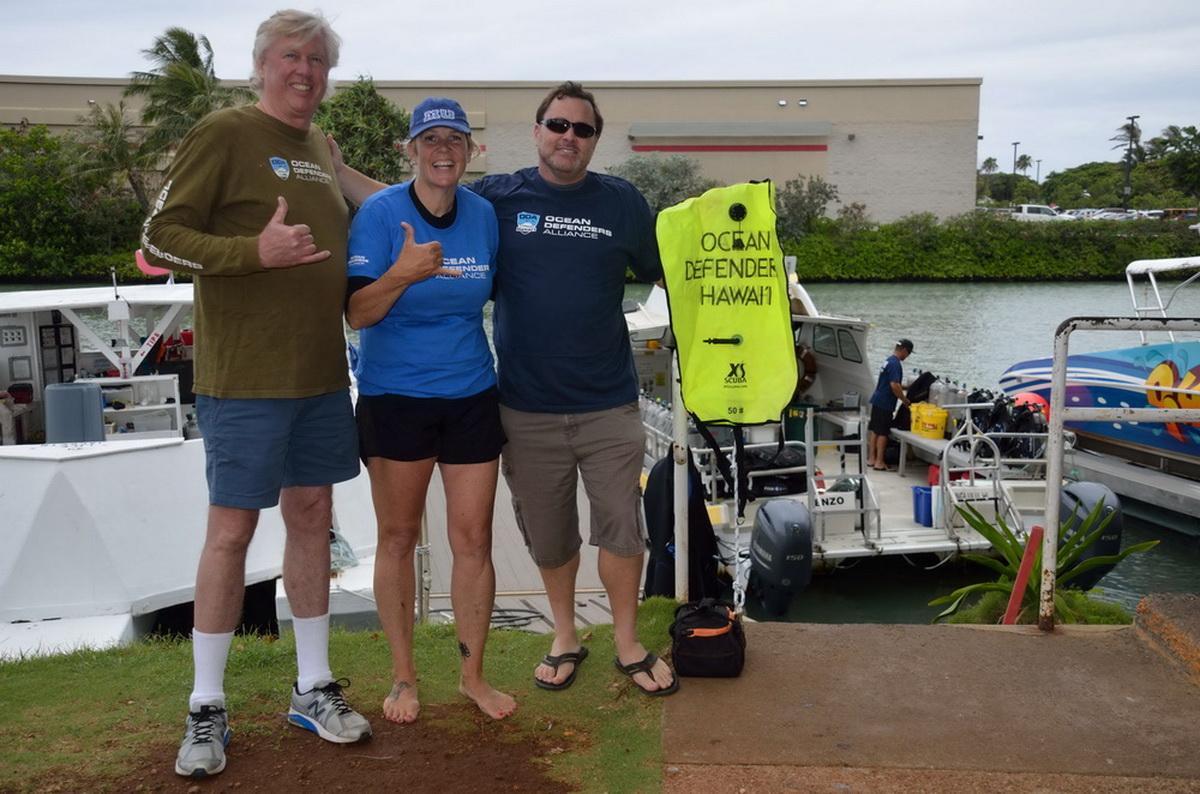 So, in the beginning of our cooperative effort, Matt, Mary and I sat down with a tide chart and scheduled out one dive per month for the rest of the year.  We then agreed to meet at the end of 2017 to see if both parties were comfortable with how the collaboration was working out…

Well, here we are almost two years later, and things have gone from good to fantastic!

Diving Conditions Not Perfect in Every Way 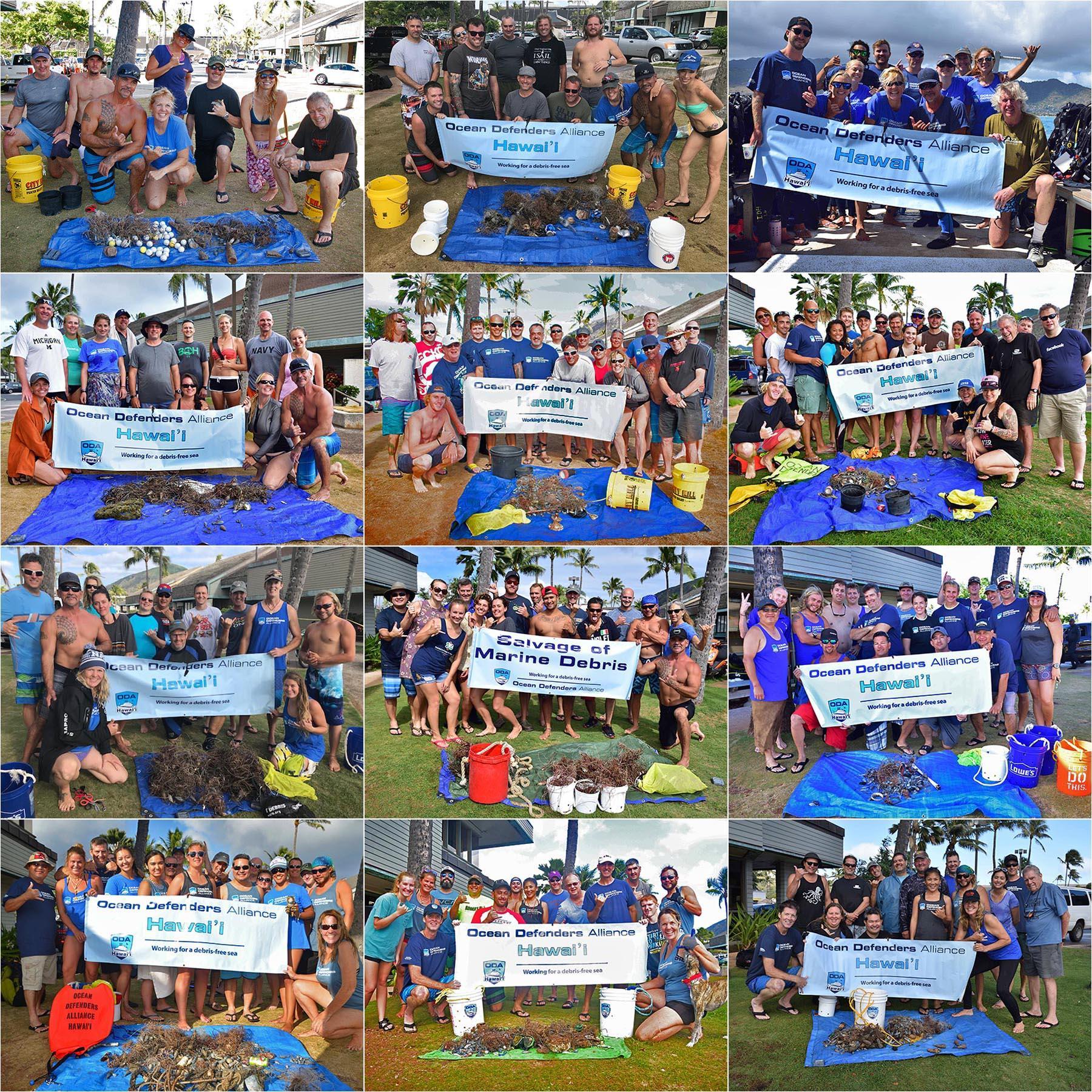 Our awesome ODA crews with their "Catch of the Day"!We have had a debris-removal outing every month since we first shook hands. The volunteer crews have pulled in thousands of feet of fishing line and hundreds of pounds of toxic lead weights among other debris. Check out our collage of just 12 of these expeditions (click to enlarge)!

These are not giant piles like you'll see of ghost nets (below), but these lines are just as deadly. Be sure to watch the video below that explains about the fishing lines.

I've been on four or five of our ODA/IDH cleanup dives and have experienced firsthand what it is like to dive in tropical waters with 50- to 100-foot visibility.  Pssst…don’t tell that to our California divers, they just might want to move.  ????

Even though the water temp makes diving here sound easy, the area that we’ve been concentrating on can get REALLY pounded by big waves.  The site is called China Walls, and when the waves hit those rock walls, the splash back can make for very challenging dive conditions. 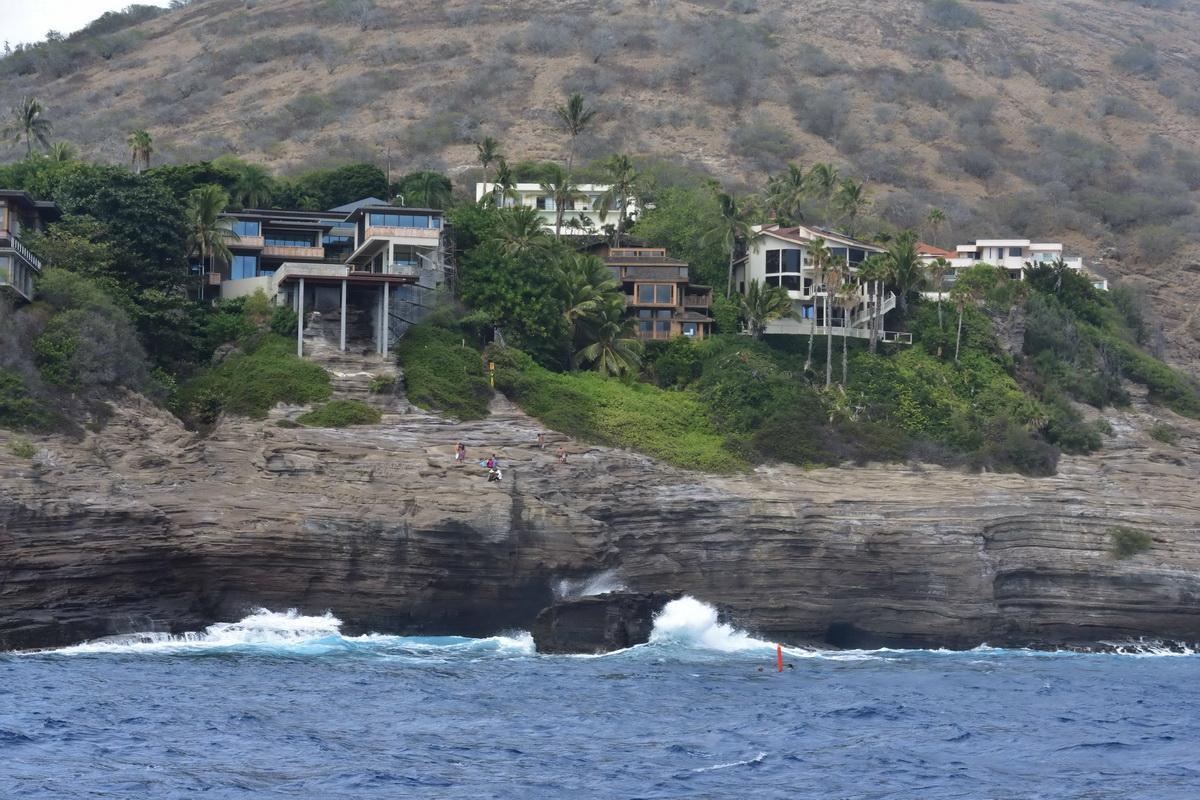 We have actually gone out there a few times and had to cancel it because the waves made it seem like the volunteers were diving in a washing machine.

So, I have nothing but admiration for the folks who have volunteered for these dives.

Bucketloads of Gratitude to ODA-HI Volunteers

On my most recent trip to Hawai’i I wanted to have a little get-together so I could thank these proactive folks in person.   I had been talking with our Oahu Volunteer Dive Team Coordinator & U/W Photographer Ken Staples about it. He called his dive buddy, Glenn Roberts, to figure out where we could hold this event.  Glenn contacted the management at his homeowners’ association and before you knew it, he had reserved a really nice banquet room that was right on the shore of Hawaii Kai Harbor.  Perfect setting! 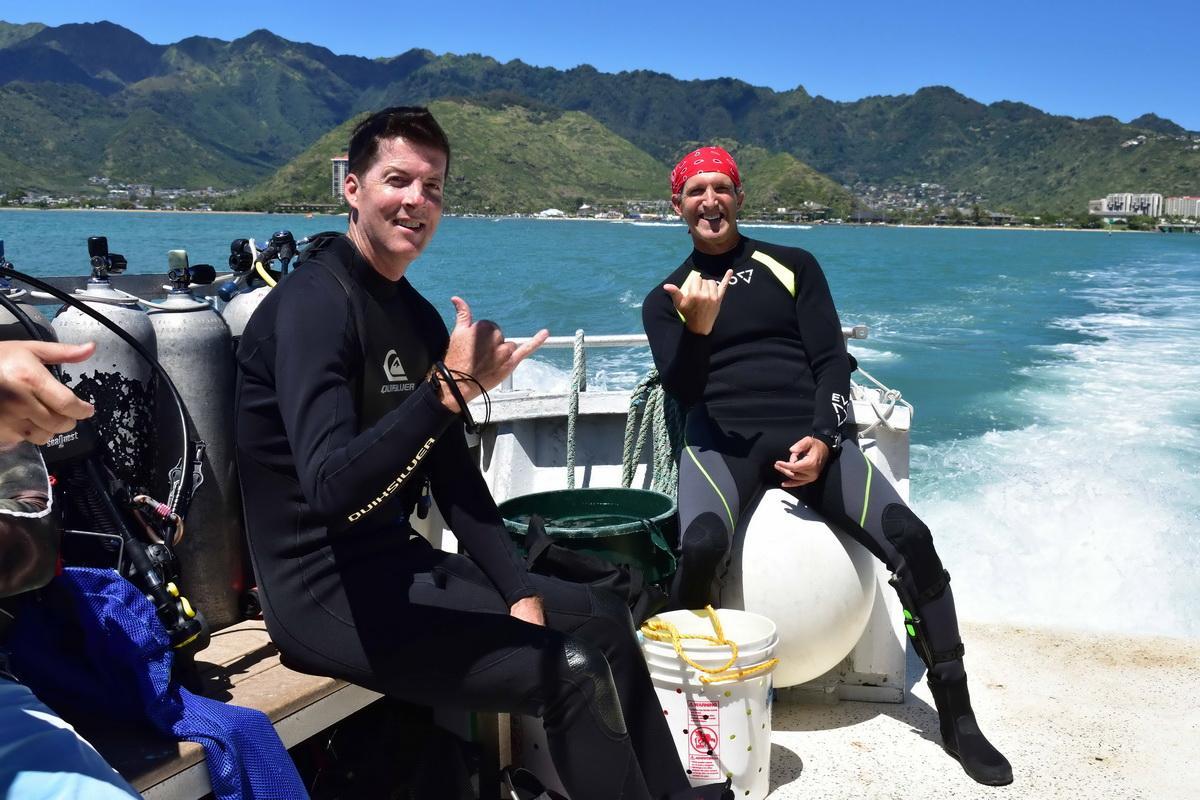 Ken sent an invitation to all the volunteers about our party, and on Thursday, April 11th, we had 28 people join us to have a celebratory meal together.  I got to do a little show and tell with two short video presentations. 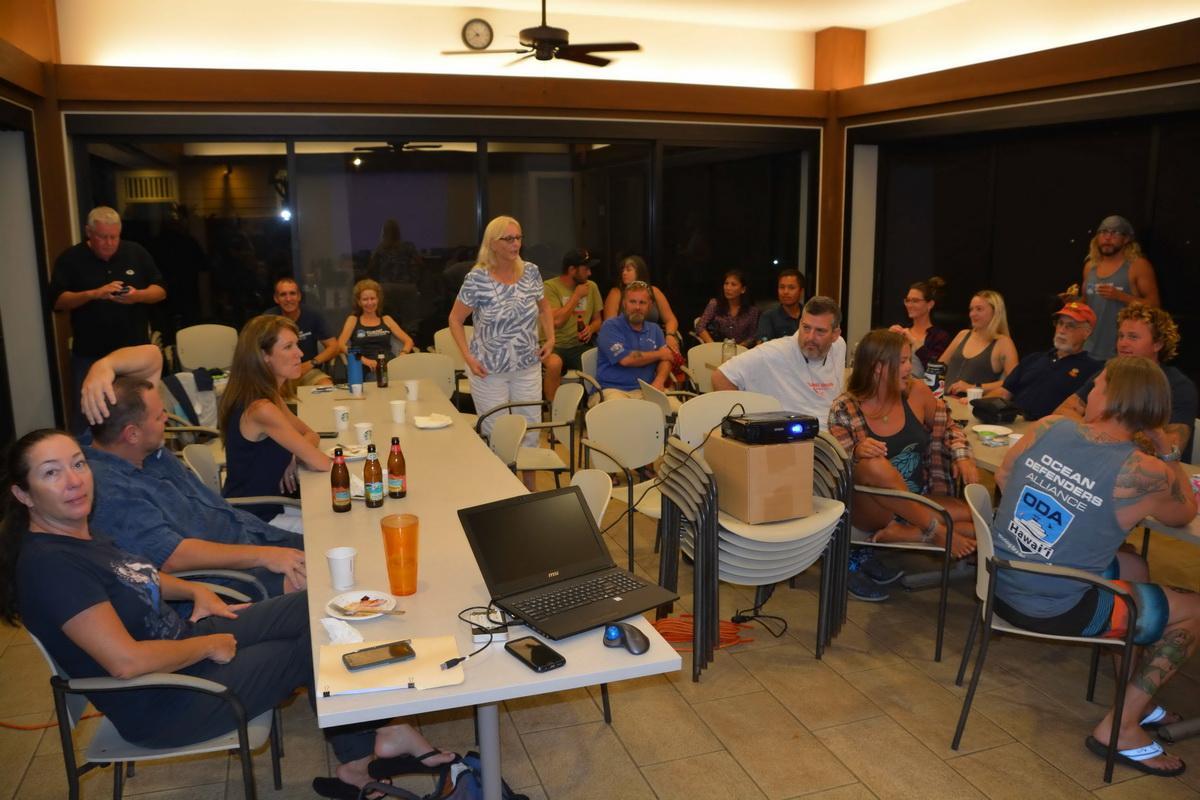 After that I previewed a five-minute video, I put together specifically addressing the impact that fishing lines can have on marine wildlife.  Corals, fish, turtles, dolphins, and Manta Rays have all been affected by as little as five-feet of these lines. These lines are big problem in the Oahu waters that ODA/IDH are focusing on.

The response from the video was just what I had hoped for.  Everyone loved it.  There were a few suggestions on things to add to it, but the overwhelming response was: WHEN ARE YOU GOING TO RELEASE IT?

Well, here it is:

The goal of this video is twofold: 1) Make people realize the horrible impact these lines and hooks have on these animals, AND 2) Encourage them to support our underwater cleanups – either physically or financially.

At the conclusion of the night, Ken Staples was presented with our first annual ODA-HAWAI’I CREWMEMBER OF THE YEAR award! I presented him with a framed personalized poster as a small gift of gratitude. 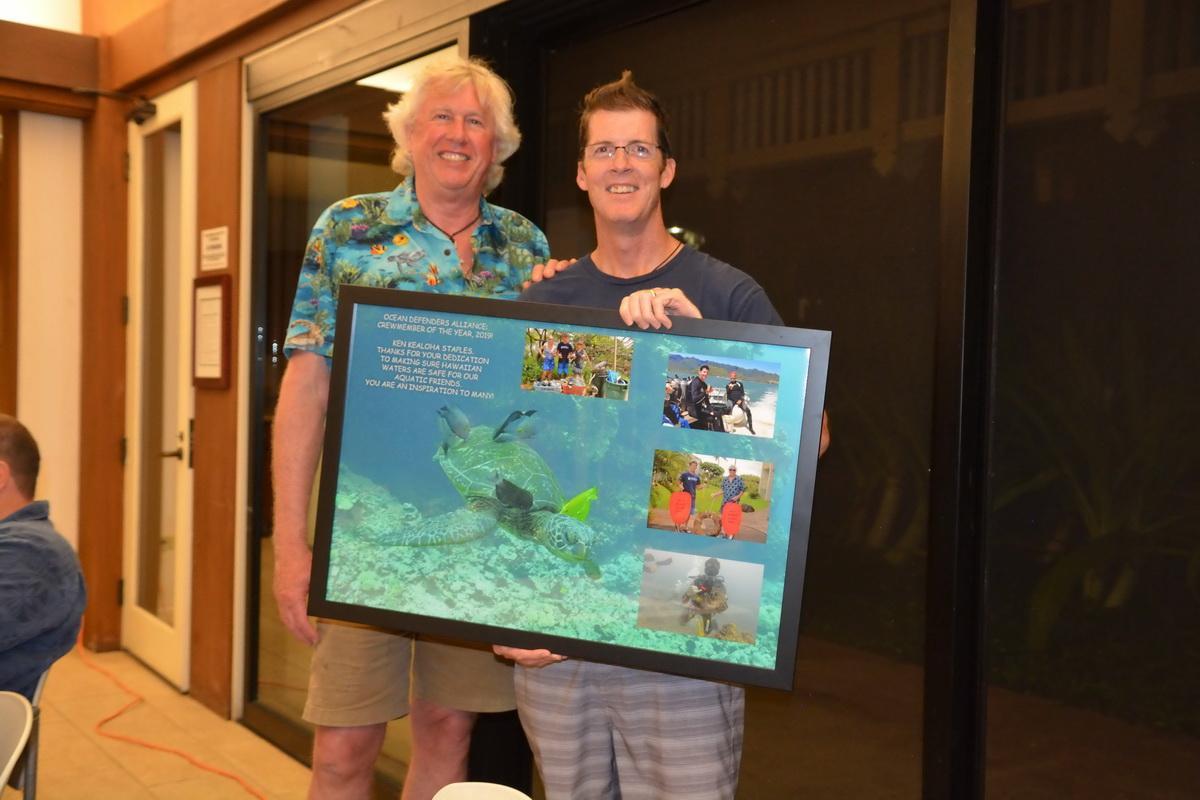 Ken was born in Hawai’i and has a real passion for the oceans that surround these paradise islands.  We are fortunate to have him on our ODA-HI Team. 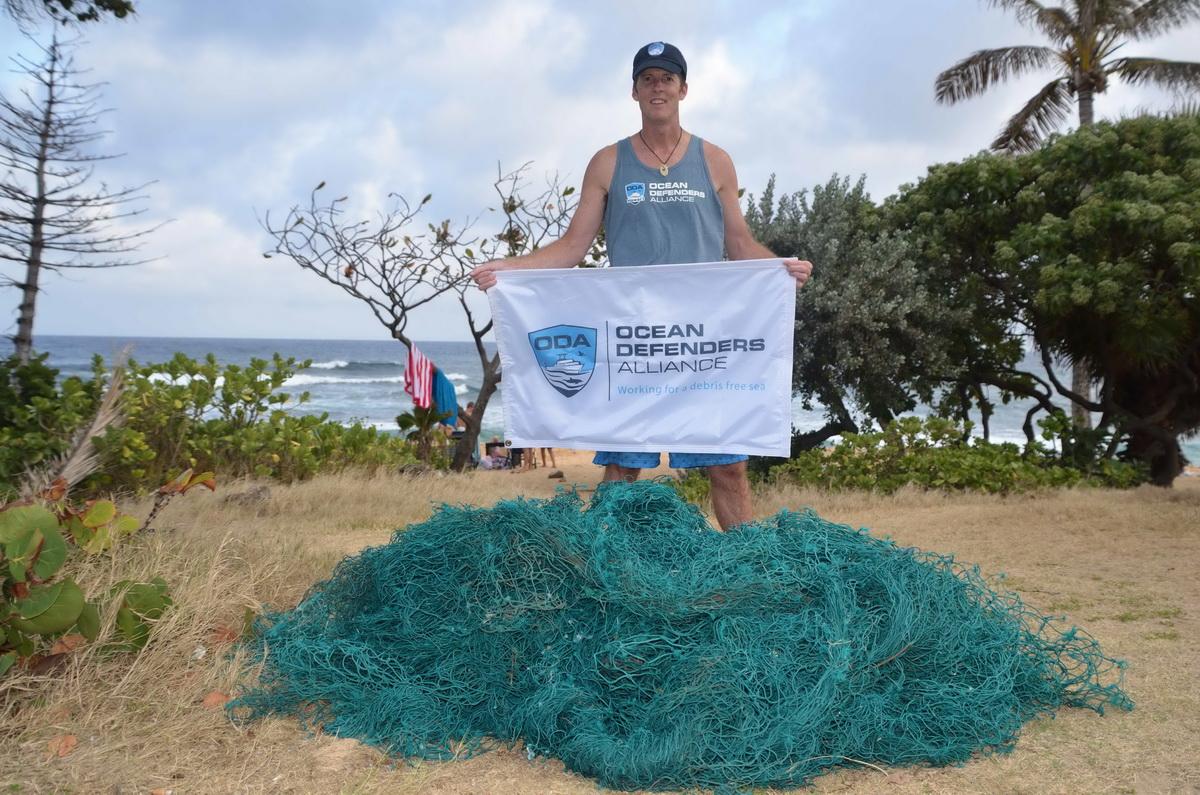 He has located and removed over 2,000 pounds of nets, thousands of pounds of plastic debris. Be sure to check out the Photo Gallery below; there are lots more photos of the debris Ken has been instrumental in recovering.

Ken has started reaching out to the business community to make them aware of the impact ODA is having in Hawai’i, and to entice them to financially support our ongoing cleanup efforts.  He is also developing relationships with other like-minded nonprofit groups to see if we can perform some collaborative cleanups in the near future.

It was a fantastic night of hanging out with people who have gone the extra mile by helping with these cleanups once a month for the past two years.  Here is a list of most, but not all, of the people who attended:  Henry Bennet, Lisa Bishop, Tim Hollingsworth, Ray Hollowell, AJ Jaeger, Kelsey, Malia, Ed McNeil, Patty Mitchell, Andrew Monnig, Matt Negard, Dan Okamura, Christine Pang, Anka Roberts, Glenn Roberts, Bill Runkle, Ed Sisino, Tammy Sisino, Cindy Staples, Ken Staples, Kevin Wong, Greg Zimmerman, Lisa Zimmerman, and Matt Zimmerman. 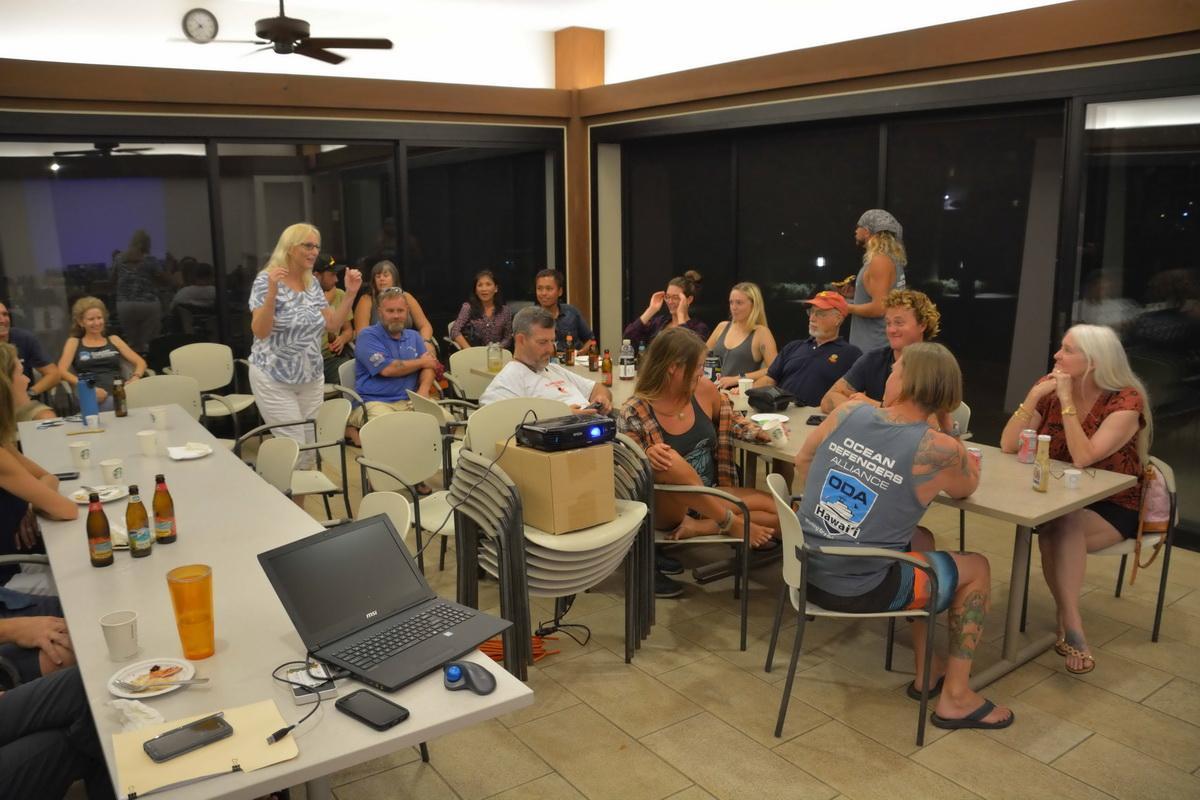 A HUGE mahalo to each and every one of you, as well as all the other volunteers who have made this phase of ODA’s history such a success!

Let’s do this again next year, and in the meantime: HAPPY (marine debris) HUNTING!