On Sunday the 22nd, I joined some folks gathered by our partner Kohala Divers to do an underwater cleanup of the local harbor that sits inside Kawaihae Bay.  Please don’t ask me to pronounce that, I fail miserably at speaking Hawaiian… 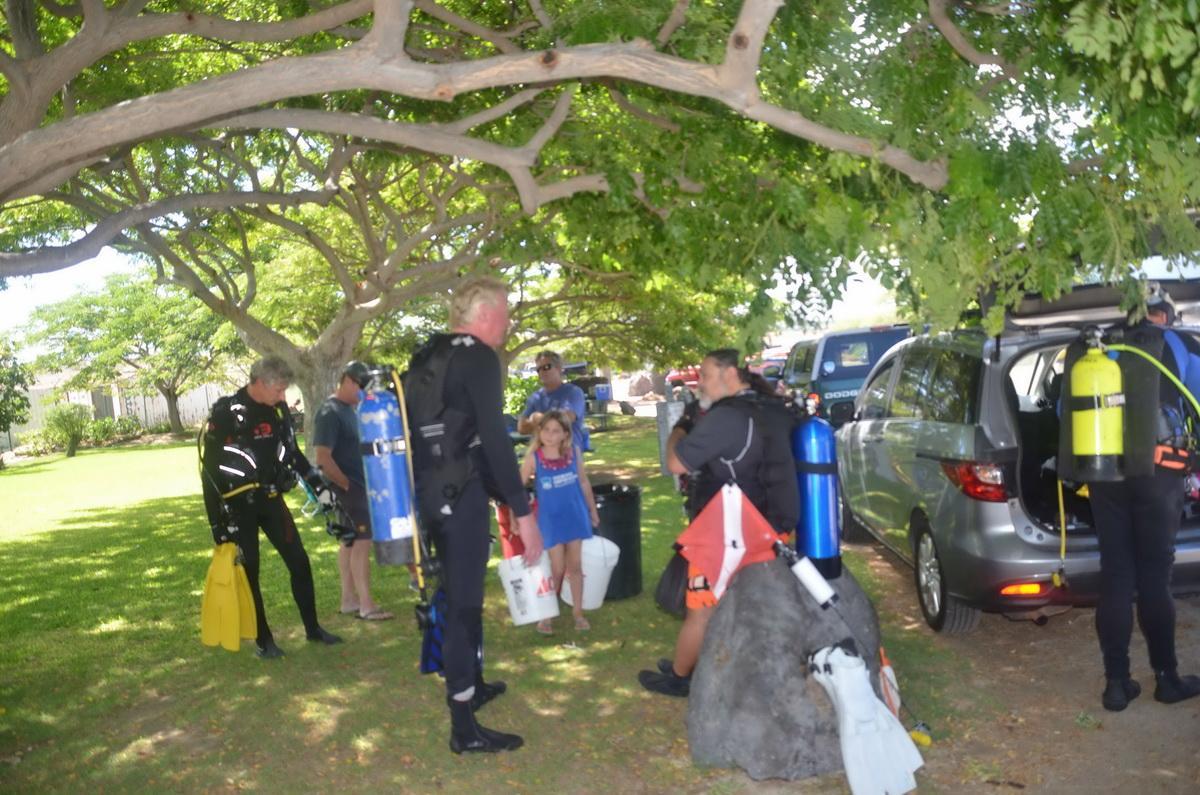 The harbor is on the northwest side of the Big Island.  We did an earlier cleanup of this site in April, but we knew we had hardly made a dent in it, so were glad to return.

Rebekah and Greg Kaufman own and operate Kohala Divers and ODA is proud to work with them to engage volunteer divers to remove marine debris from the reefs and harbors in that part of the island.

Defending the Ocean Together

Rebekah put out a blast on social media as well as posting on their website to let people know that we were going to do a cleanup on the 22nd.  We were joined by a small group of divers and several more people turned out to help from shore.

The divers were: Christie Ramirez, Chuck Weber, James Kregness, Jim Sturz, and me.  On shore were Greg, Kiana, and Rebekah Kaufman, and their friends Neil and Beau. 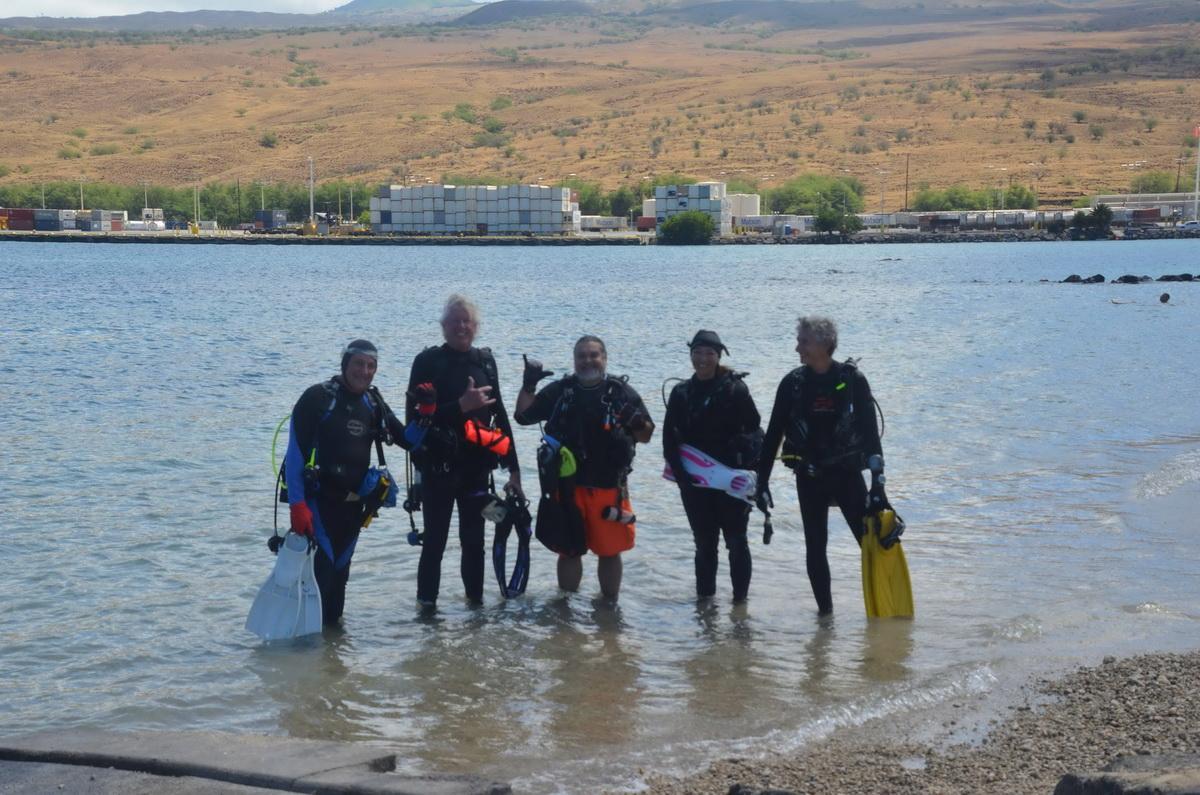 Christie is new to diving; this was only her seventh dive, and she was an enthusiastic participant. It’s pretty amazing to see a someone just starting out in the dive scene and already she is giving back to the ocean. Thank you for taking action, Christie!

James had read about our outing that morning on Facebook, canceled his boat dive and loaded up his gear in his truck to help out.  Talk about jumping at an opportunity to be part of something that helps ocean wildlife and habitat!

This was Jim’s second time out with us.  He’s a writer and got an article published in Coastal Living and included a bit about his experience with us back in December of 2017. Thank you for the mention, and thanks for coming out with us again, Jim!

Chuck is a dive Instructor and so he naturally took the lead to make sure we were all well-coordinated and versed on what we were about to undertake. We appreciate you looking after the Team, Chuck!

Lots of Humans and Lots of Debris

The site we were working on is heavily used, by both the public and the military.  When we arrived, there were soldiers all over the place, and you could see three large ships about two miles outside the harbor.  In addition to the soldiers, there were hundreds of people on the beach and kids were in the water.

As the five of us divers proceeded to get in our gear and head to the water, a couple of the soldiers told us that if we hear big boats coming our way to NOT get in their path.  YOU BETCHA! 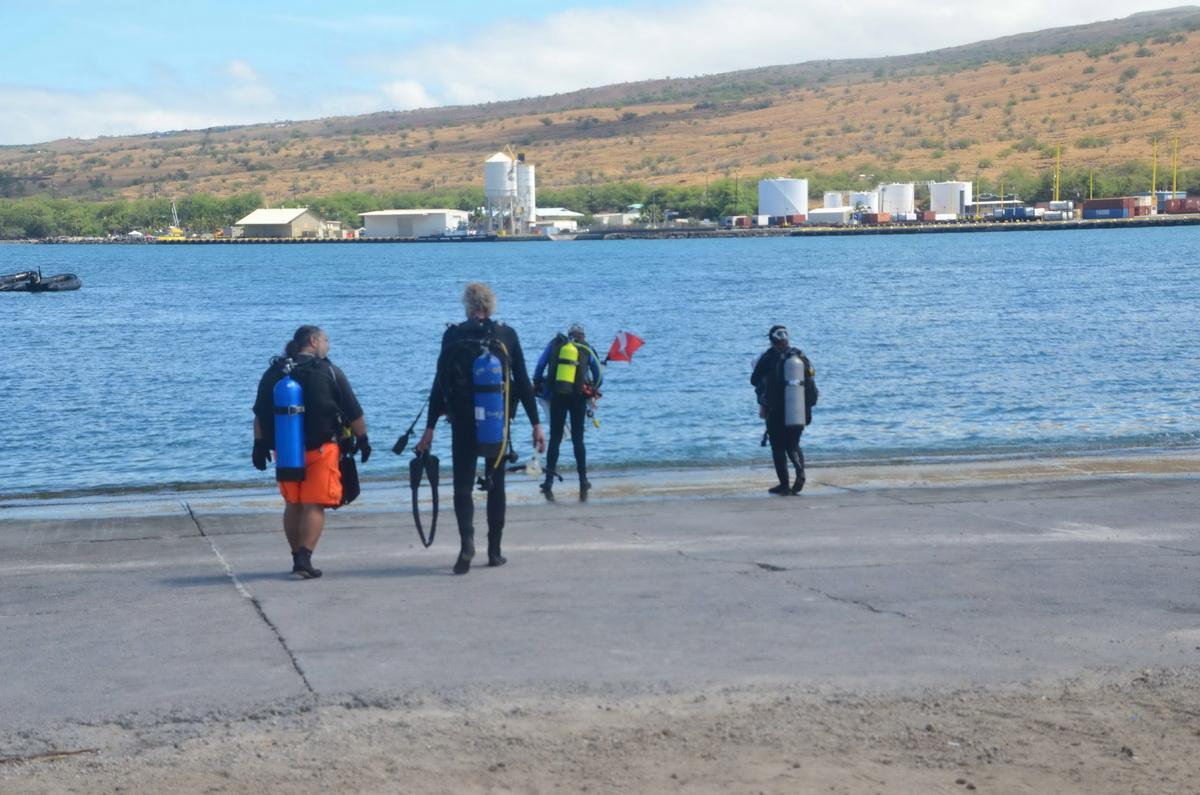 After we kicked out to the site and dropped down in to 20 feet of water, I was startling to see a lot of man-made stuff lying on the ocean floor.  Cables, leather tie-down straps, hoses, immense tires, masks, goggles, cans, bottles, heavy metal components from boats, and a plastic tarp…to name a few. 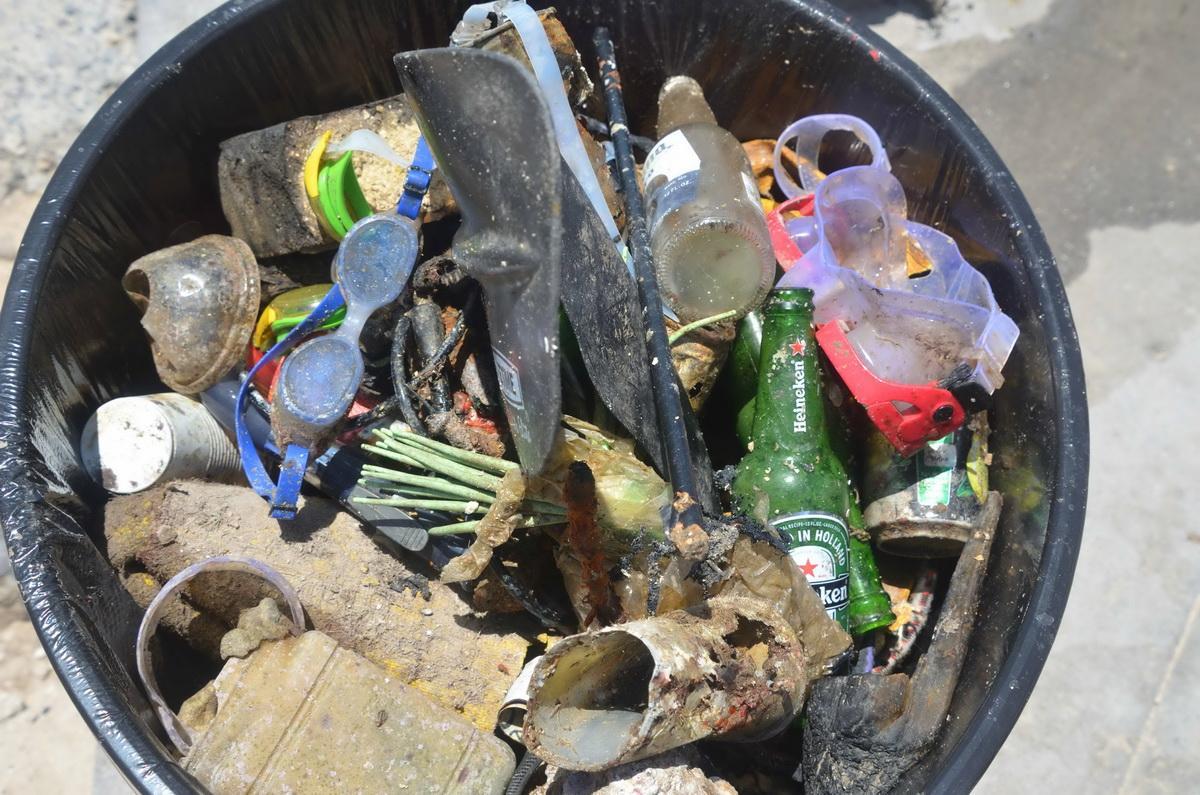 We all dropped down at the same time and within minutes I lost sight of everybody.  UW vis (underwater visibility) was pretty good when we started, but quickly dropped to around 10 feet once we started pulling stuff out of the sandy bottom.

Variety of Debris – All is Hazardous

I immediately found a really big plastic tarp lying on the bottom.  I wanted to see if it could be removed.  Some of it was buried in the sand, but a lot of it was visible.  As I surveyed it, I could tell it would not come up without a fight.  It turned out to be massive.  Probably 100 feet by 50 feet. This thing would either smother benthic life or impede its growth.

When I found an edge, I started cutting into it, hoping it could be cut up into sections to remove one at a time.  As my knife was cutting through it, the visibility went to zero.  Zero as in I couldn’t see my hands or the tarp. Better be careful!  I took my sweet time and eventually hauled out three separate sections of it.  Glad to have all my fingers still attached and successful in removing about 10% of the tarp.

As I was swimming back to the beach to end my dive, I was thrilled to see young Kiana with her mask, fins and snorkel on pulling up bottles and plastic wrappers from the shallows. 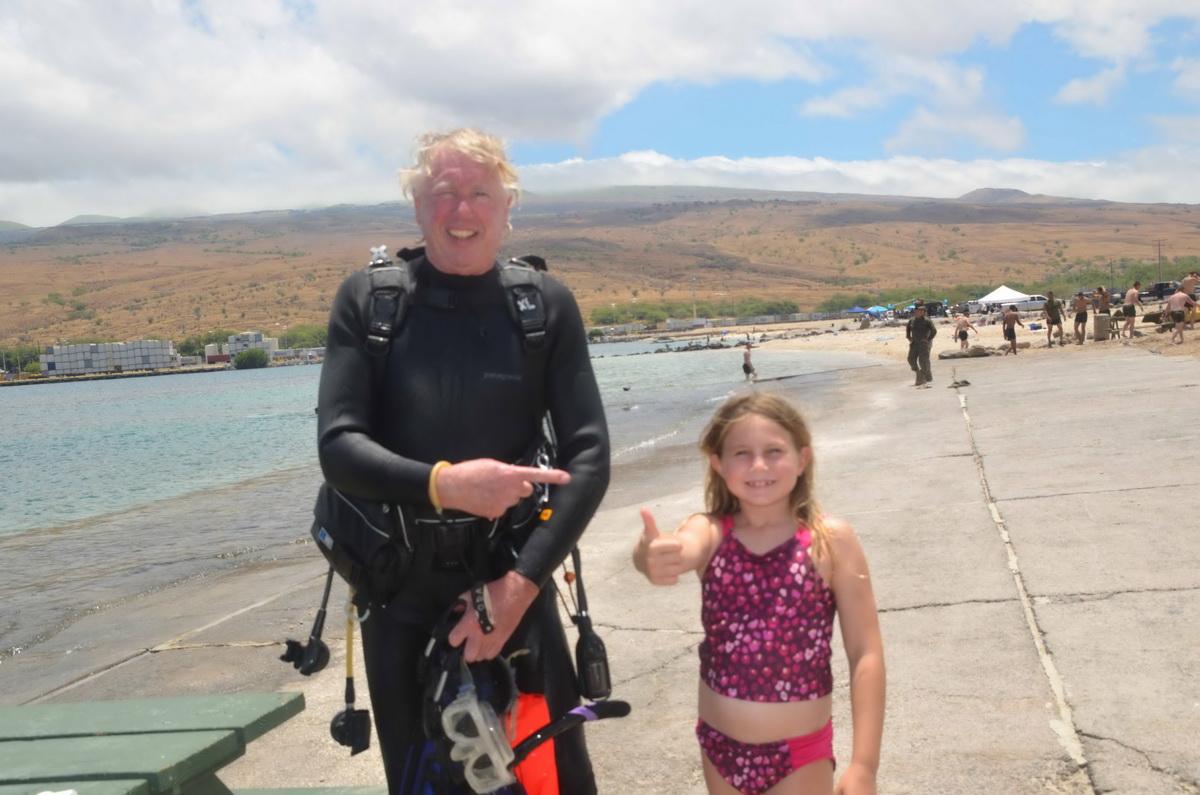 And she was grinning from ear to ear.  Beautiful sight to see a seven-year-old taking part in an ODA cleanup.  I have a feeling we will be seeing more of her in the future.

After we all got out of the water and put as much of the debris as we could into two large garbage cans, the Navy guys started rolling ashore in their amphibious vehicles, mere yards from where we had just been. Including a photo to show you what they look like. 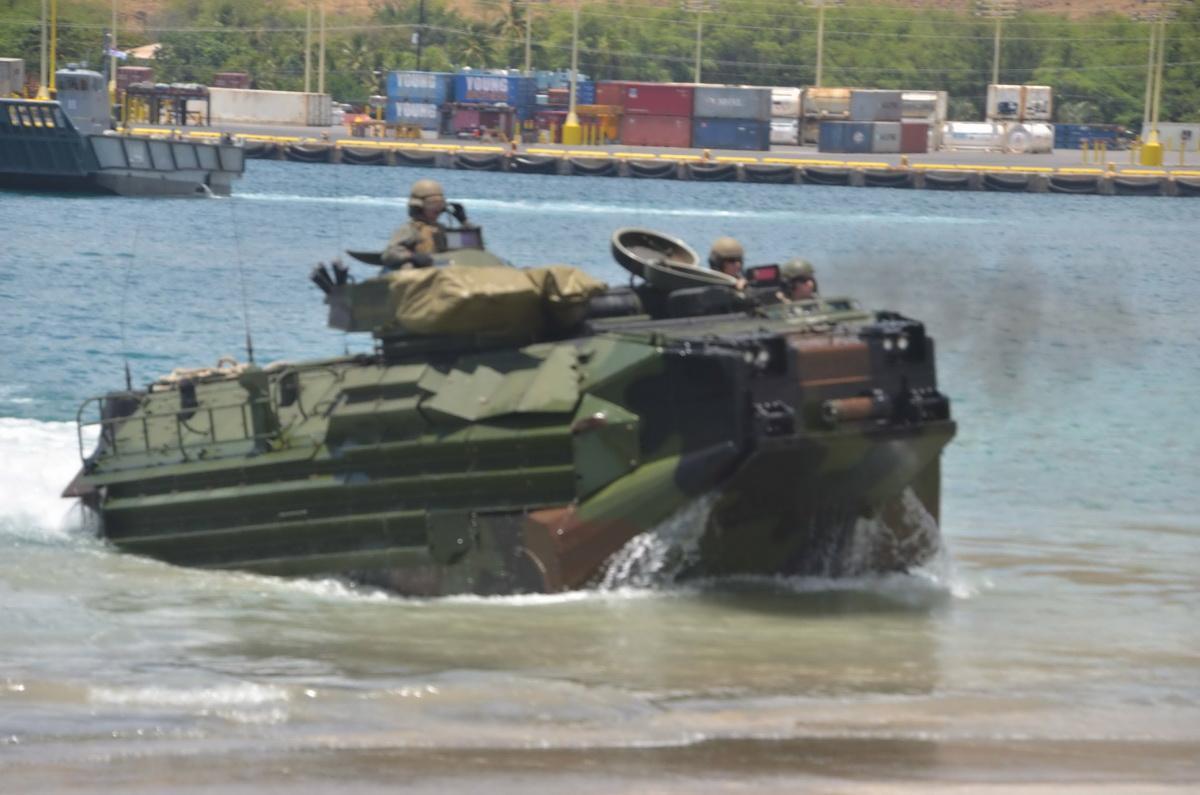 Successful Day and More to Do

In all, we hauled out around 300 pounds of debris.

Everyone was pumped about getting in the water and doing something positive for the environment. 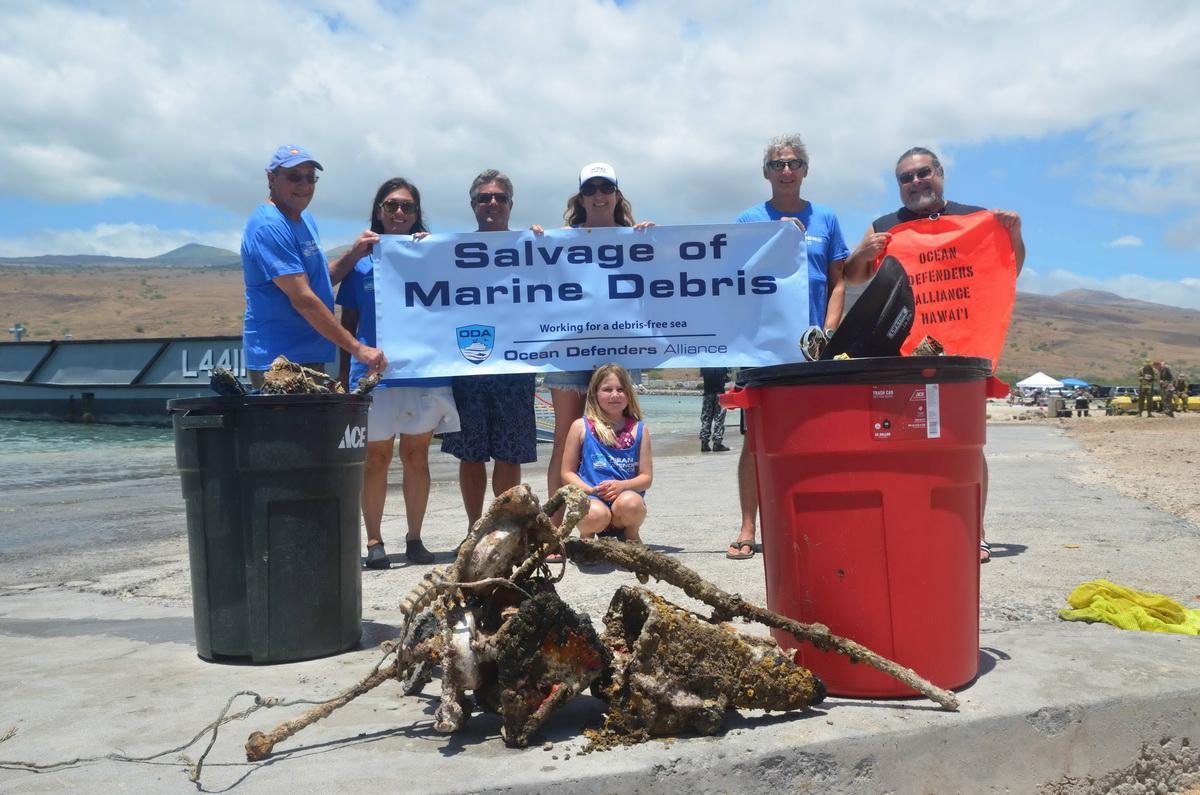 What a great combo: diving and cleaning the ocean! Several people asked us why we were doing it, so this gave us an opportunity to inform them why it is so important to remove as much of this junk as we can.

Knowing how plastics break down into smaller and smaller pieces over time, can you imagine how much microplastic that single tarp alone would create?  I shudder to think.

A huge mahalo (thank you) to all who participated.  Let’s do it again, soon!

Be sure to LIKE the Facebook page of Kohala Divers so you’ll be informed of the next outing to remove plastic and all kinds of pollution from the beautiful waters of the Big Island.