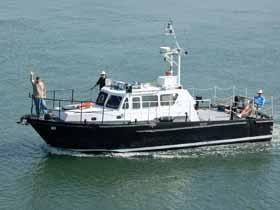 Welcome, Clearwater! After many months of numerous physical and financial challenges, ODA's new flagship is finally with us in Southern California!

Captain Paul Watson and Sea Shepherd Conservation Society had made an incredible donation of this formidable vessel to ODA in October 2006, and we struggled for more than seven months to locate a berth somewhere in Southern California with reasonable rates and a good location. Jared Rubin was finally able to locate what we needed in Wilmington Harbor, near Long Beach, California.

The next step was getting her trucked down from Friday Harbor, Washington, where it had been berthed for almost a year and over-exposed to the elements including heavy rainstorms that caused some flooding in the engine compartment. After an extensive search on the internet and phone, Chris Aultman found us a good deal with a company out of Colorado.

With all the logistics and transportation costs figured out, the boat arrived on a flatbed truck Thursday, May 24th, at 7:30 am in Huntington Harbor. After unloading it off the truck and putting it into the water, we all kept our fingers crossed that no damage had been sustained during the transportation process. We checked for leaks and didn’t find any. The safety straps from the crane were let loose and we secured the deck lines to the dock while we tried to start the engines. After a couple anxious cranks, the engines started with a much welcomed roar. A few minutes later we let loose the lines and were on our way.

It was an exhilarating feeling to finally get out to sea. After getting out of the mouth of the harbor I just wanted to keep going till we hit Catalina, but the instrument panel and the prime gauges were basically dead. We took the conservative route and headed right for our new berth. John Milligan, Jared Rubin, Erik Burrows, Chris Bell and Chris Aultman all took time off from their jobs to help out. Thanks guys!

A former Canadian Coast Guard patrol vessel, the Clearwater is a very solid 38 foot aluminum boat with two massive diesel engines. While she's exactly what ODA needs to continue our life-saving work, the main drawback is the dramatic fuel consumption. We have calculated that the engines get about 1 mile per gallon, typical for boats of this size, draft, and engine type. Couple that with a $500/mo slip fee and ODA’s fundraising ability will be put to an extreme test while expanding our range from Laguna Beach and Long Beach, out to the Channel Islands.

We worked tirelessly for 6 weeks testing all the functions of the boat and repairing what wasn’t working. The electrical team had their work cut out for them. Much of the electronic system and gauges were not operating properly, but we had some good schematics of the boat systems that helped us understand how the boat was wired. As usual the team was lead by John Milligan, but unlike with the Garibald (ODA's first workboat measuring approximately 25 feet), this time he had a lot of expert help. Erik Burrows and Chris Bell steeped in and took ownership of different functions that needed repairs. All three of them put in an inordinate amount of hours first figuring out how all the systems worked, then fixing the issues.

There were also numerous mechanical projects. Chris Aultman took ownership of the engines and the engine room. We spent 3 weekends cleaning the entire engine compartment. No small feat given that it was drowning in 140 gallons of bilge water. We had to pump it out by hand and put it into 5 gallon containers, then dispose of it. Next was the task of scraping all the gunk off the walls and flooring, then attacking it with cleaning fluids to assure we would not allow any oily water into the ocean when we emptied the bilge. The final task was giving the entire compartment a cleaning with a pressure washer. It is now devoid of any major amounts of grime, plus you can actually see the aluminum floor.

On the deck, we had to grind down the whole davit support system as it was absolutely cover with rust. Then we applied rust prohibiting paint on all the surfaces. Now we have a functioning davit that we will use to pull up all the debris that we find. No more fighting with the traps to get them on the deck!!

We also got a carpenter to volunteer his time to fix up the galley area. Thanks to Reeve, we now have a galley that resembles a nice kitchen!

My heartfelt thanks go out to all who helped work on the boat over the last 6 weeks: John Milligan, Erik Burrows, Chris Aultman, Chris Bell, Jared Rubin, Jim and Lisa Lieber, Holly Gray, Eric Cabrera (our newest member!), Phil Robledo, and Reeve.

The Shake Down cruise…

On Sunday, July 15th, we let loose the deck lines and headed out of the berth toward Palos Verde. The crew was composed of Jim and Lisa Lieber, Erik Burrows, Chris and Kyla Bell with 2 of their friends. It was the kind of weather I like, overcast and hardly any wind. Great conditions for a good day on the sea. The boat ran extremely well with no electrical or mechanical problems.

Similar to a formal dive boat, we will need to install seating arrangements that will have tank holders incorporated into the seats to keep them from rolling around and causing danger on the deck. That will get all the gear off the deck and make it a lot easier to suit up for the divers. We also need to design, manufacture and install a dive ladder and cover to protect us from the harmful effects of the sun.

But we need donations to make the Clearwater the best she can be for our ongoing operational needs. We are out of money and desperately need to raise $5,000 to complete the job of making her a viable, working dive boat. Additionally, we now have general operating costs of $700 per month for slip and fuel fees. We really need your financial help to stay in effective operation and make our mission a reality. The animals and environment greatly need our help and it is only with your generous donations that we can make this happen.

Please remember that there is no one in Southern California doing what ODA does. We are not only saving animals lives, but we are clearing the waters of man-made debris that is a navigational and swimming hazard.

Please visit our Donation Page and find out how you can support ODA*. Also take a look at our Wish List to find the physical items that we need. Thanks in advance for any donations you can make.

Some interesting background information on the Clearwater:

The newest addition to ODA's proud navy, the Clearwater, is a former Canadian Coast Guard vessel first launched in the early 1970's and decommissioned in the 1990's. She's 38 feet in length and pushed by two diesel engines. The vessel, then named "Avocet" was donated to Sea Shepherd by an activist named Jonathan Paul who used it for his group, Ocean Defense International. Among other things, he used the Avocet to try to stop a tribe of Native Americans from killing gray whales in Washington back in 1999. Although the tribe successfully killed one whale, they were forced to stop after that and have not killed another one since then. So the Clearwater (fka Avocet) comes with a great storyline.