These are trying times for everyone, and the ODA volunteers are no different. We’re itching to remove marine debris! I’m in contact with several of the hardcore divers and crew, and we’re all trying to figure out how to get back on and in the water, safely.

I received a call from a fisherman last Wednesday.  He had also called me about a year ago and said for the last 25 years he’d been fishing at one spot along the Los Angeles (LA) Harbor breakwall.  He said his fishing lines had been getting shagged on something on the bottom and he thought it was probably an abandoned lobster trap.  We had a crew go to that location and check it out.  He was correct, there were four traps at that spot, and we removed them all. Here is our picture that day in October 2019. 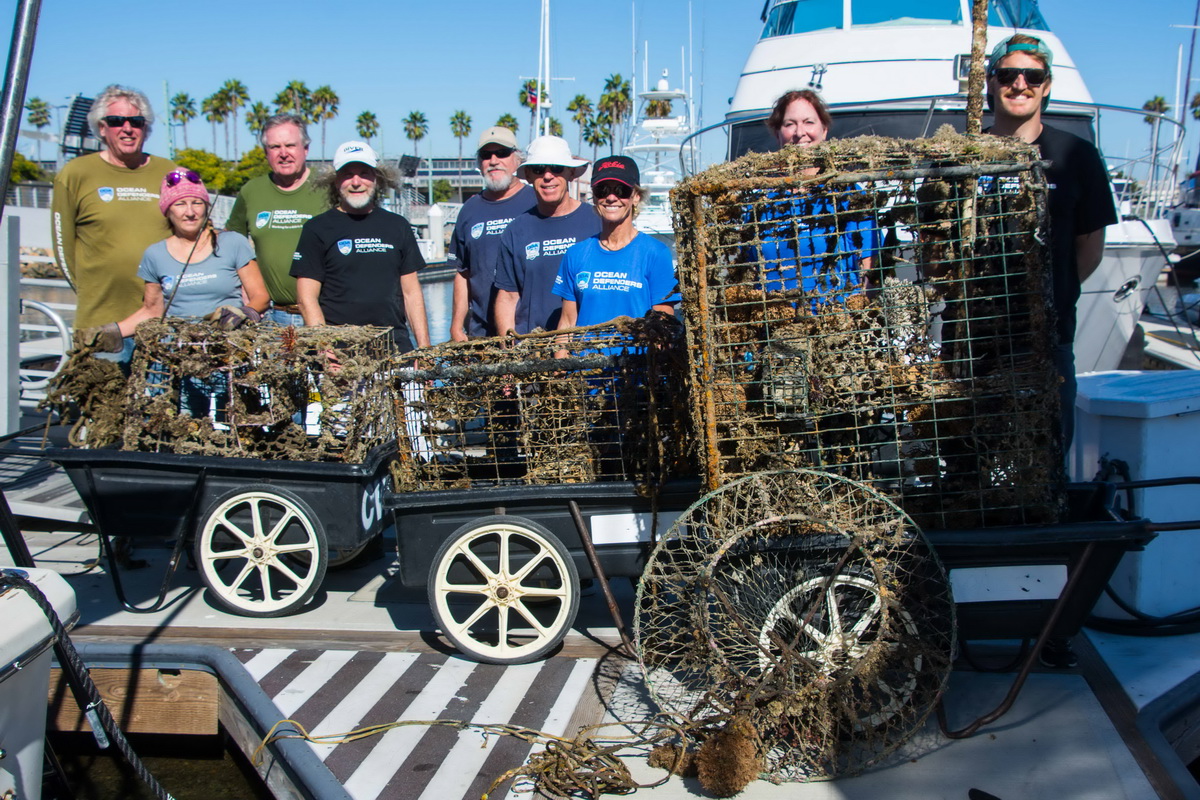 So, when he called again to report possible debris, I thought it best to check it out again.

Jeff Connor, Jim Lieber, Geoff Walsh, and I met up at the boat slip in San Pedro on Sunday morning, July 19th.  Because of the rapid escalation in verified Covid-19 cases in California, we wanted to use as few people as possible on the boat. Jeff and Geoff were on the crew back in 2019 when we pulled the four traps - see them here in 2019: 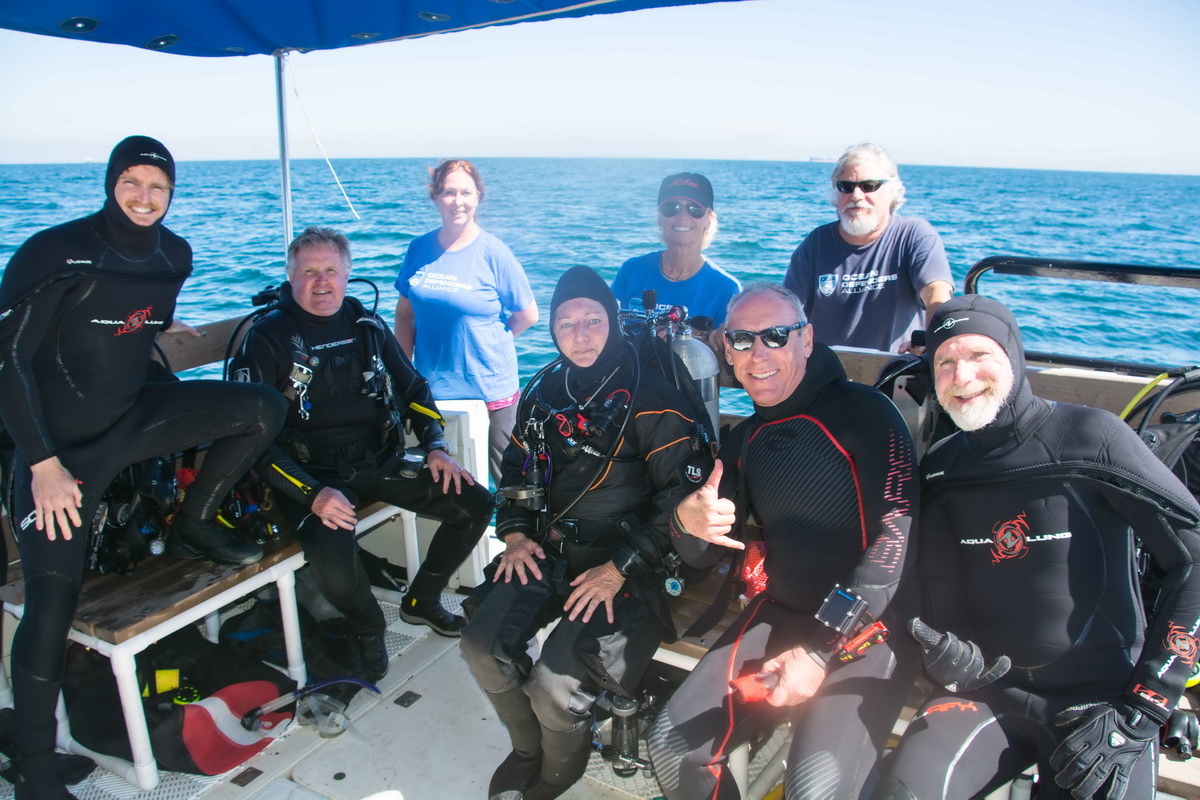 This site is just outside the LA Harbor entrance, on the east side of Angels Gate, which you can see in this picture.

The seas were relatively flat, but there was a strong wind.  We dropped anchor about 100 yards from the rocks that form the breakwall.

Jeff and Geoff donned their wetsuits and we took a shot with our skeleton crew. That's deckhand Jim Lieber standing behind them. 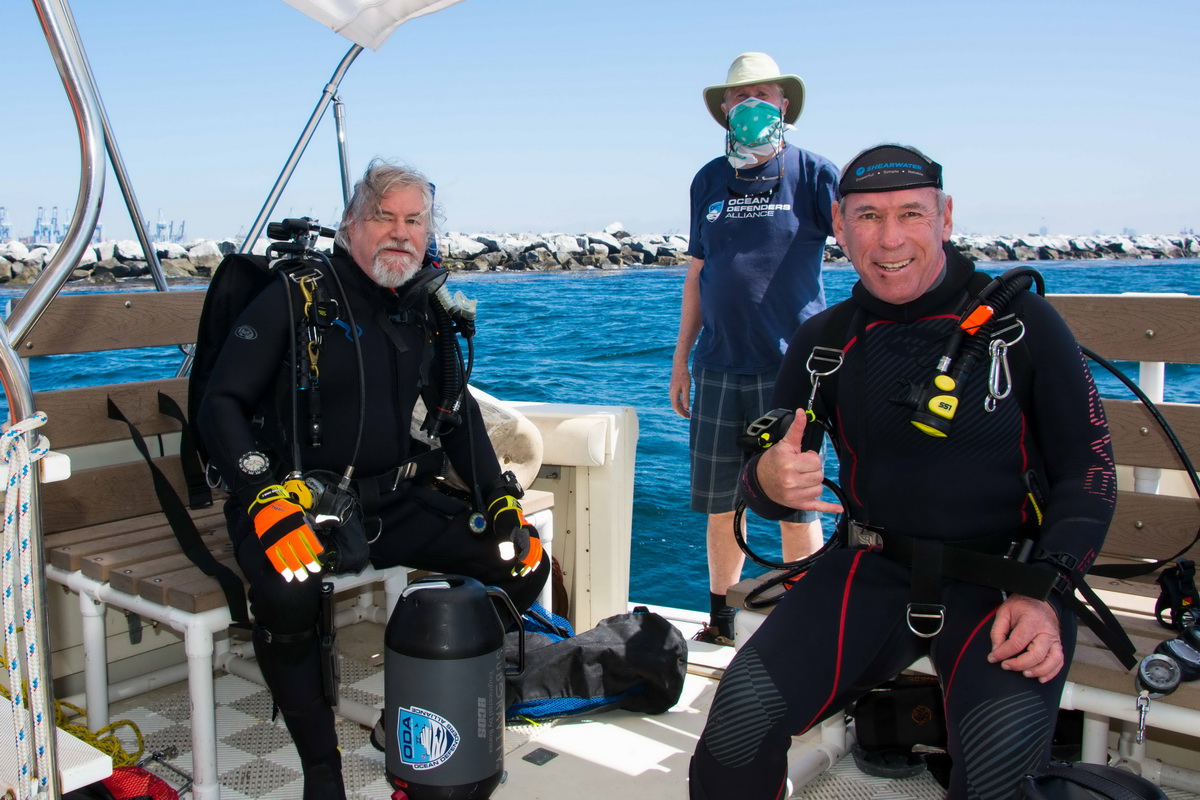 They’re plan was to use the underwater scooters in order to cover as much ground as they could, knowing that the air in their tanks would only allow them to be down for about 30 minutes. 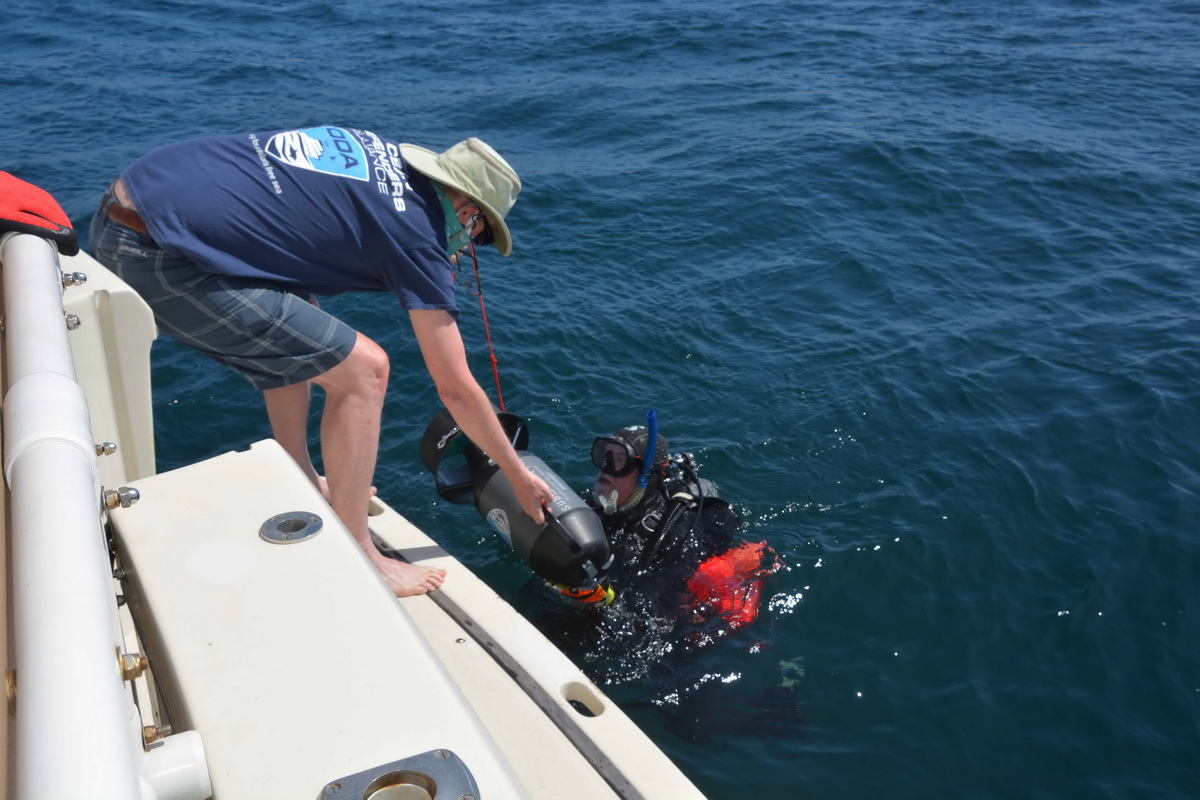 As Jim and I sat on the boat, we quickly lost sight of where the divers had gone.  The wind really started picking up and the surface waves made it impossible to see where their bubbles were coming up.  We waited and waited, and sure enough after about 30 minutes they surfaced.  But we didn’t see any lift bags…And that’s because they didn’t find any traps or trap remnants. 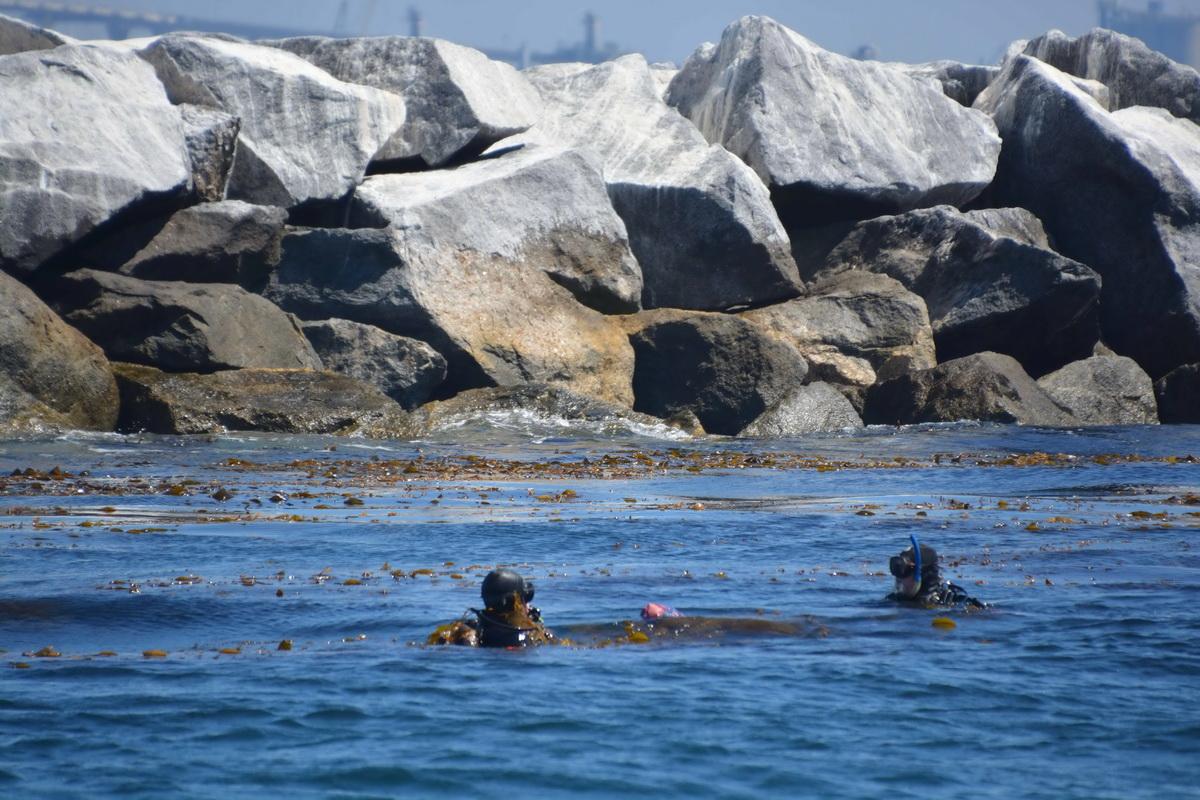 What they did find was an old boat wreck…in the very same spot the fisherman told me to look.  That’s most likely what his hooks were getting caught on.  ODA is not in the business of removing sunken vessels, but we will periodically check back at this spot to ensure that no traps get stuck around it.

When Jeff and Geoff got back to the boat to climb back aboard, they had a bag full of debris and two fishing poles. 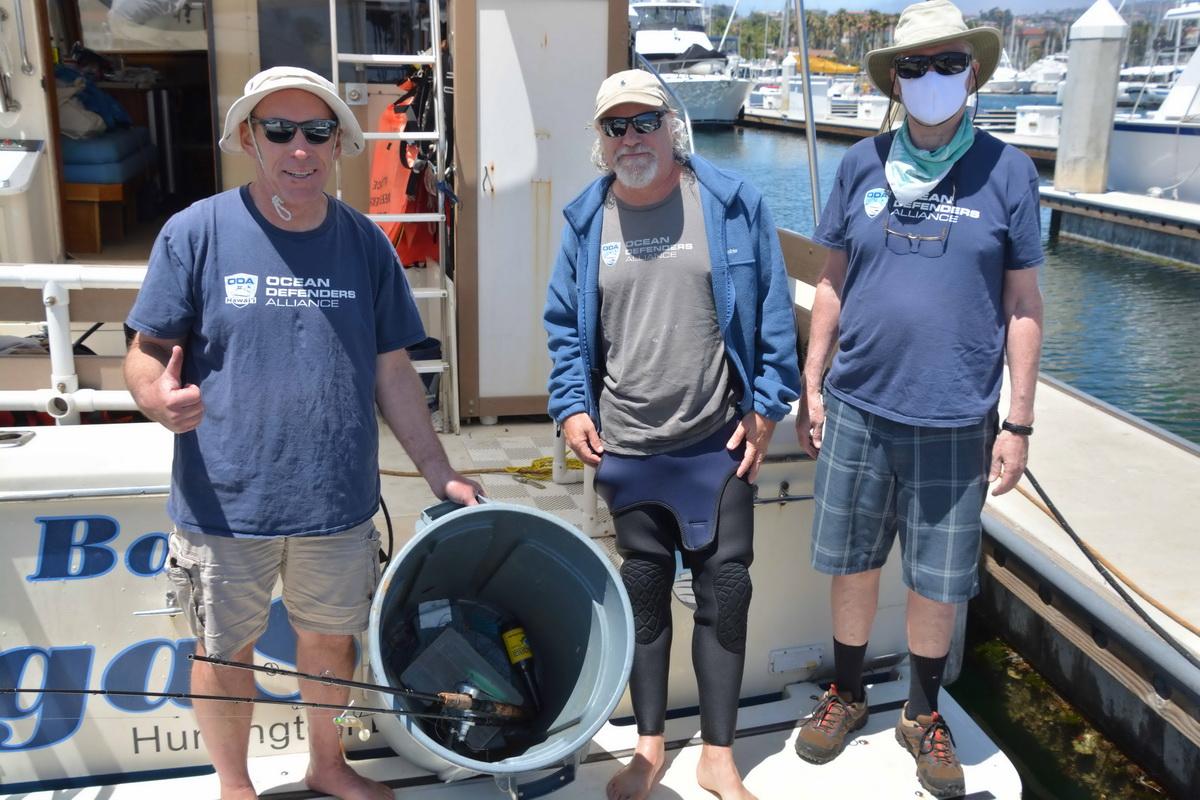 Even though we didn’t bag a trap, so to speak, we did remove about 40 pounds of debris.  Plus, we feel more confident that we can resume our cleanup operations, just with fewer people onboard.  We’re going to limit the number of divers to two, with a crew of three at most.

Jeff and Geoff said it was a great dive, with visibility at roughly 20 feet.  They saw lots of schooling fish, mostly calico bass and seniorita fish.  Because the water temp is cool, at 55 degrees, the kelp is healthy and thriving there.  This is good news for all the animals that rely on kelp to hide in, eat, and lay their eggs on.

Good news that we can ALL use more of…

Stay tuned for more reports coming. We had a channel cleanup in Fullerton and a debris outing in Hawai’i waters! If you’re on Facebook or Instagram, be sure to LIKE our pages so you’ll get notices of our article postings like this one.