Big Island Boat Harbor’s Getting Better All the Time

Note to reader: Be sure to check out the photo gallery below and the fun/short video at the end of the article!

Our awesome team of ODA Volunteers and friends from Jack’s Diving Locker did a cleanup at Honokohau Harbor back in late January, and even though we removed about 3,500 pounds of debris, we all knew we weren’t done. 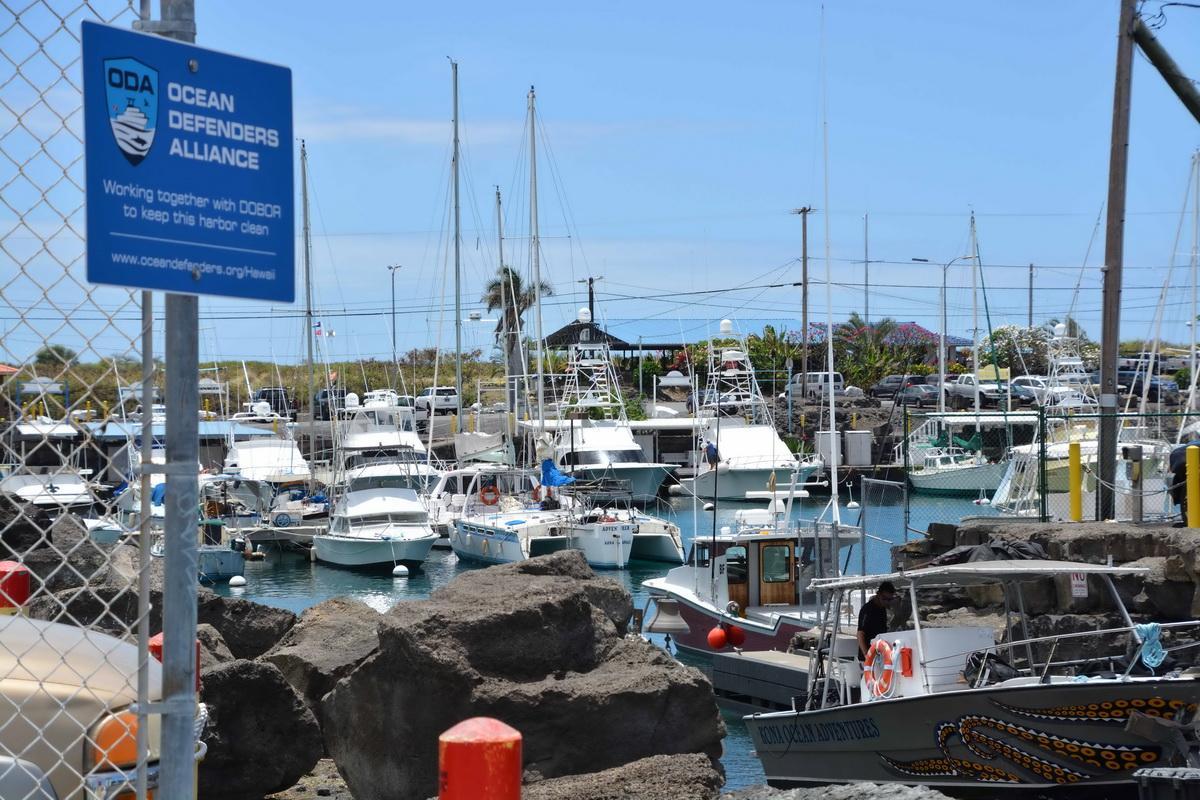 So, I talked with the staff at Jack’s Diving Locker and the Honokohau Harbor Master and we agreed to do another cleanup in a few months.

Fast forward to Sunday, April 6th, and we had close to 40 wonderful divers and deck crew show up on a beautiful Saturday to continue where we left off.

Matt Bogdanovitch and Sarah Matye (both of Jack’s Diving Locker) met me at 8am in the harbor and started setting up a shade canopy along with all the gear the volunteers would need to help the divers get some debris out of the water.

Around 9am, I gave a briefing about how the divers would work with the deck crew to make their bottom time most effective.  Matt chimed in with specific information on the exact location that we had been authorized by the Harbor Master to work in. 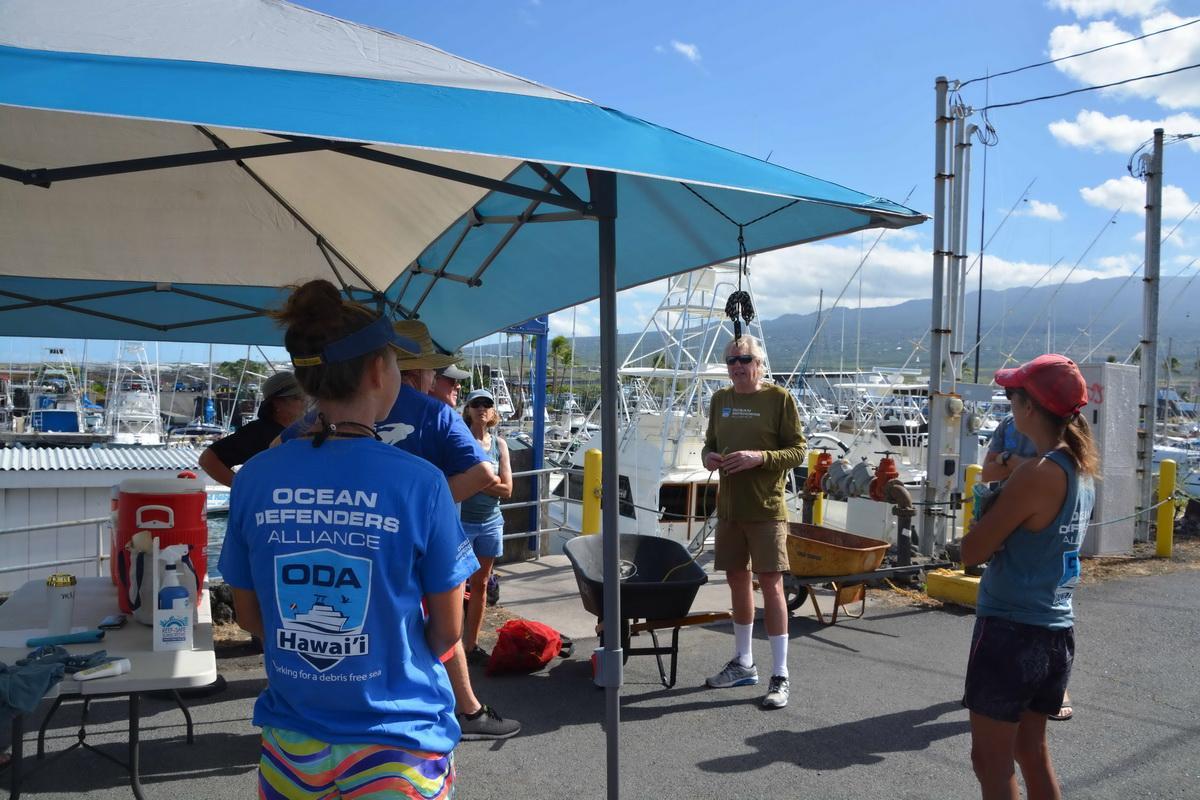 Next thing you knew, we had 14 divers doing an 8-foot plunge from the dock into the water.  Some more elegantly than others…;-) 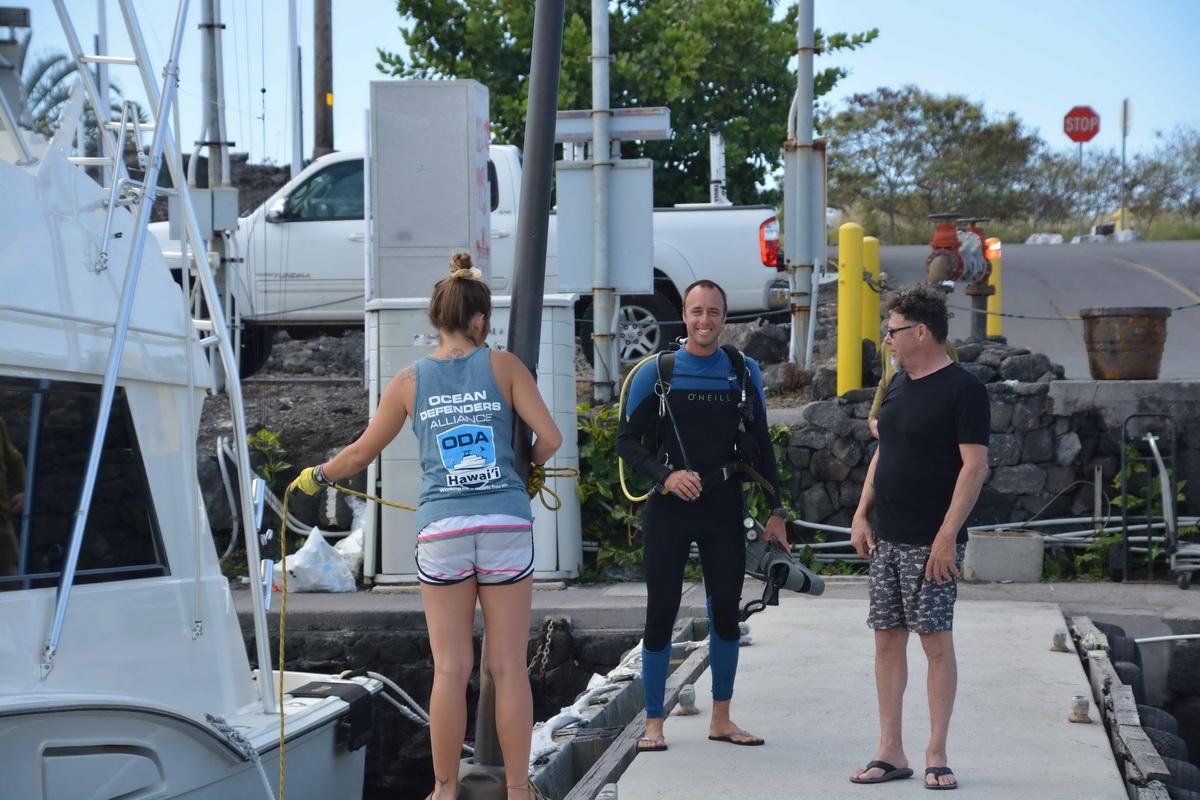 There’s a Method to Our Madness

As the divers spread out between the slips, the deck crew followed their trail of bubbles and waited patiently for them to signal that they had found something and needed a line to attach to whatever it was.

The people on deck support would hold onto one end of a rope and then toss the other end that had a weighted clip on it, in the general vicinity of the diver.  Then when the diver had the line securely fastened, they tugged three times on the line to let the person on the other end know it was time to haul up the booty. 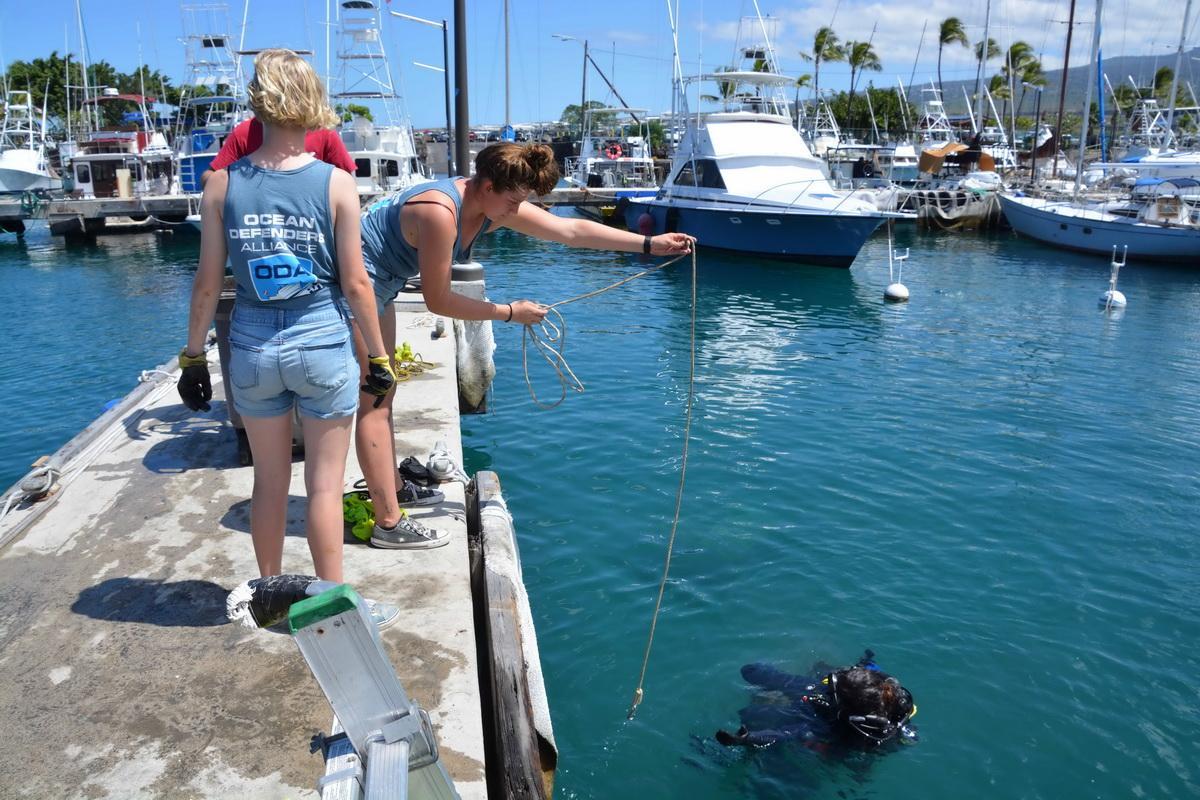 For the next two hours we were pulling up debris, nonstop.  Marine debris like: tires, hoses, tubing, bottles, cans, a plastic vase, batteries (both large and small), food containers, hundreds of feet of fishing lines… and carpets.

The Crews’ Catch of the Day

Jeff Milisen became known as THE carpet king, as he had found a pile of the stuff and worked the entire time on getting it out.  He was assisted by two young ladies on the docks, who joked about having so much carpet now that they could furnish their apartment.  Phew!! 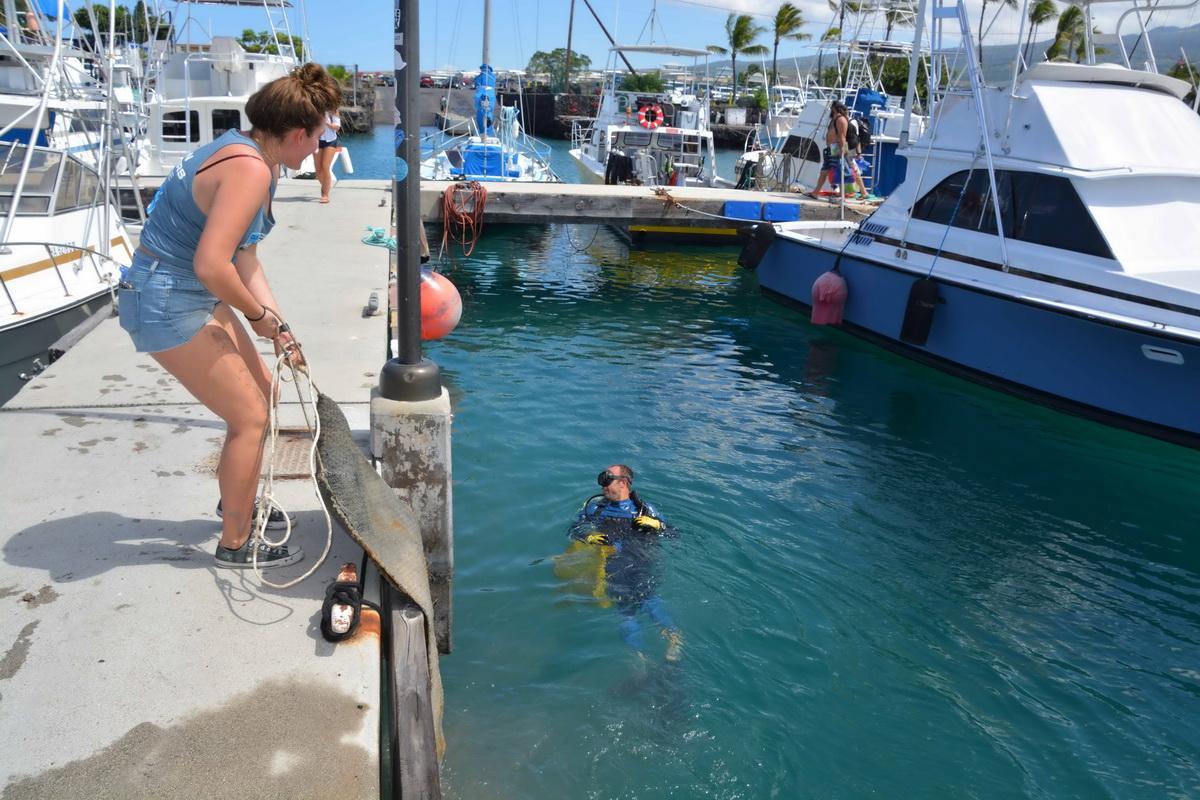 Jack Woods found a huge bait barrel.  He attached one line to it and said, “Good luck with this one!”  Even though it had holes punched in it, the dang thing was just filled with mud.  So much so that even though he scooped out as much as he could, we could barely get it lifted out of the water, let alone up another 6-8 feet to the dock.

We spent the next 15 minutes getting more lines attached to it so we could have more people pulling on the lines, while Jack removed more mud to lighten the load.  We eventually prevailed, but it took five of us, with a few expletives thrown in to declare victory. 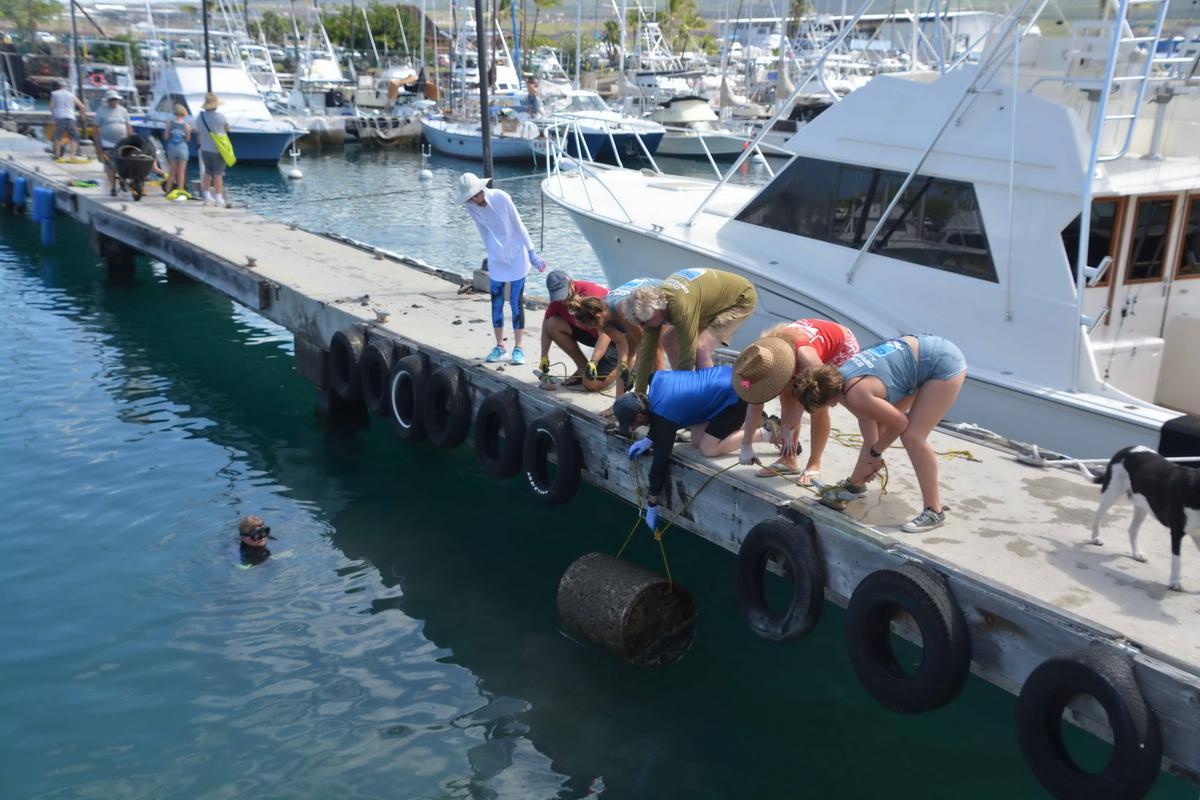 As soon as it was out of the water, a 4-foot-long green sea turtle swam by to inspect. 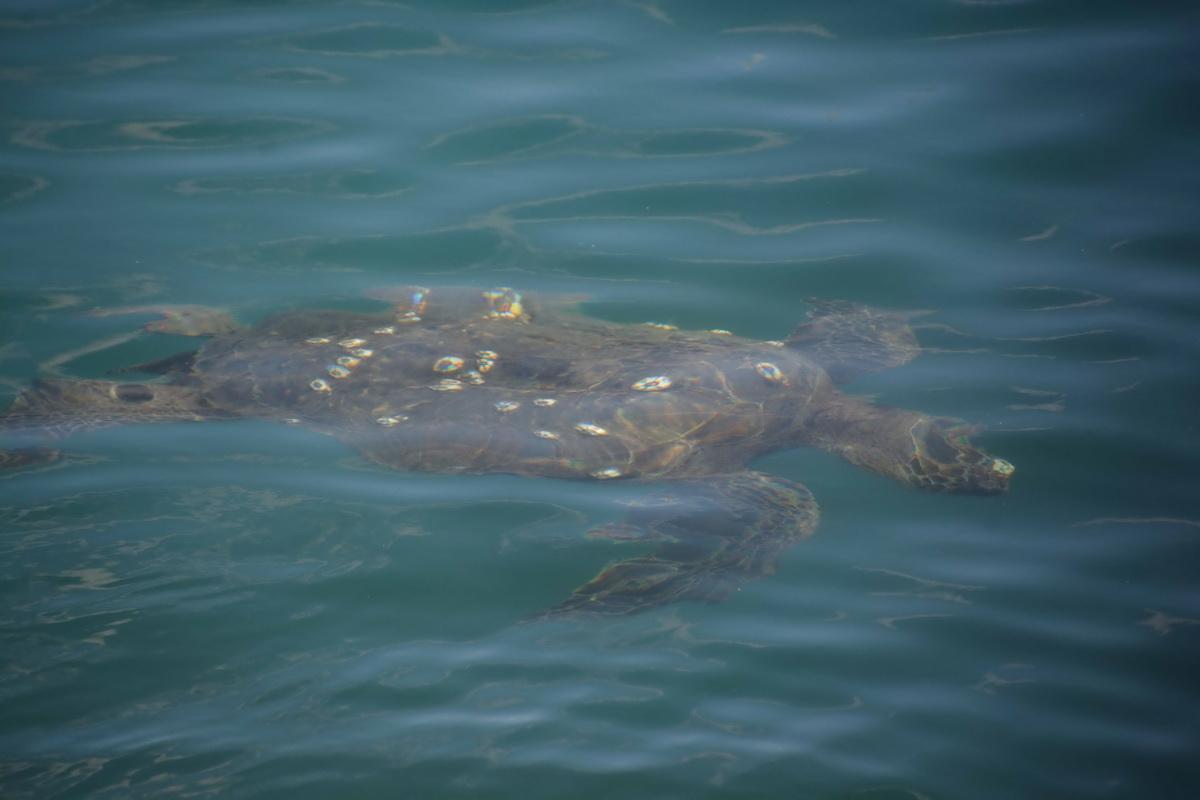 Jack went back to work and found 10 sheets of steel that someone had dropped in the water.  They were 18 inches by 36 inches and weighed about 15 pounds each.  These sheets (and the carpet) just smother the ocean floor and anything trying to grow in it! He worked on getting those out for the duration of our cleanup.

In the meantime, we had other divers working under the docks and boats, finding all kinds of plastics and rubber.  We got eight tires out, and several batteries, including two 8D batteries.  These things weigh 125 pounds each.  No easy task getting them out, but the toxic boxes must go! In total: 3,000 pounds of deadly debris was removed! 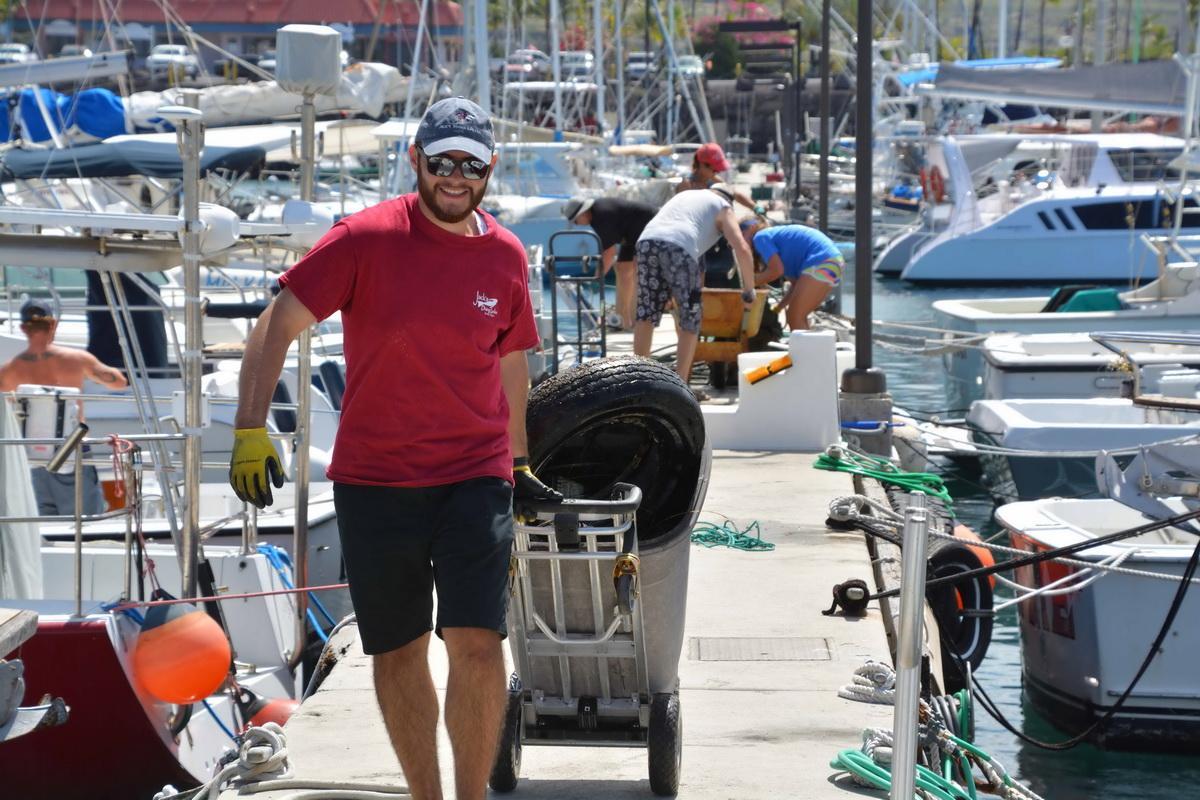 I want to thank all the volunteers for giving up the better part of their Saturday to give back to the oceans.  This marine debris is deadly to a lot of our wildlife, and removing it not only helps them live out their lives with less pollution in their systems, but it also makes for fewer spaces for invading organisms to attach themselves to. 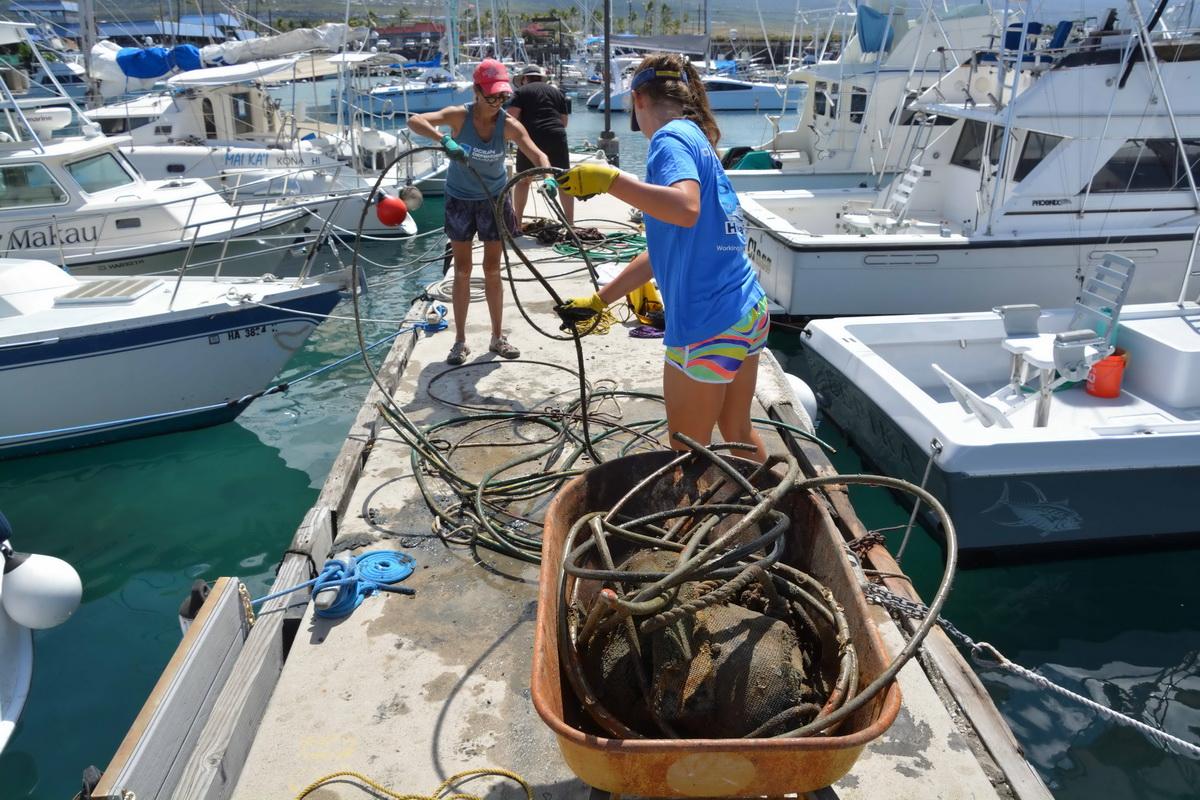 To explain: When any man-made object is put in the water, organisms immediately start to colonize on the surfaces.  Corals are slow moving and take eons to colonize an area, whereas invasive species are quick to take advantage and out-compete the natives.

The volunteers on this cleanup were: 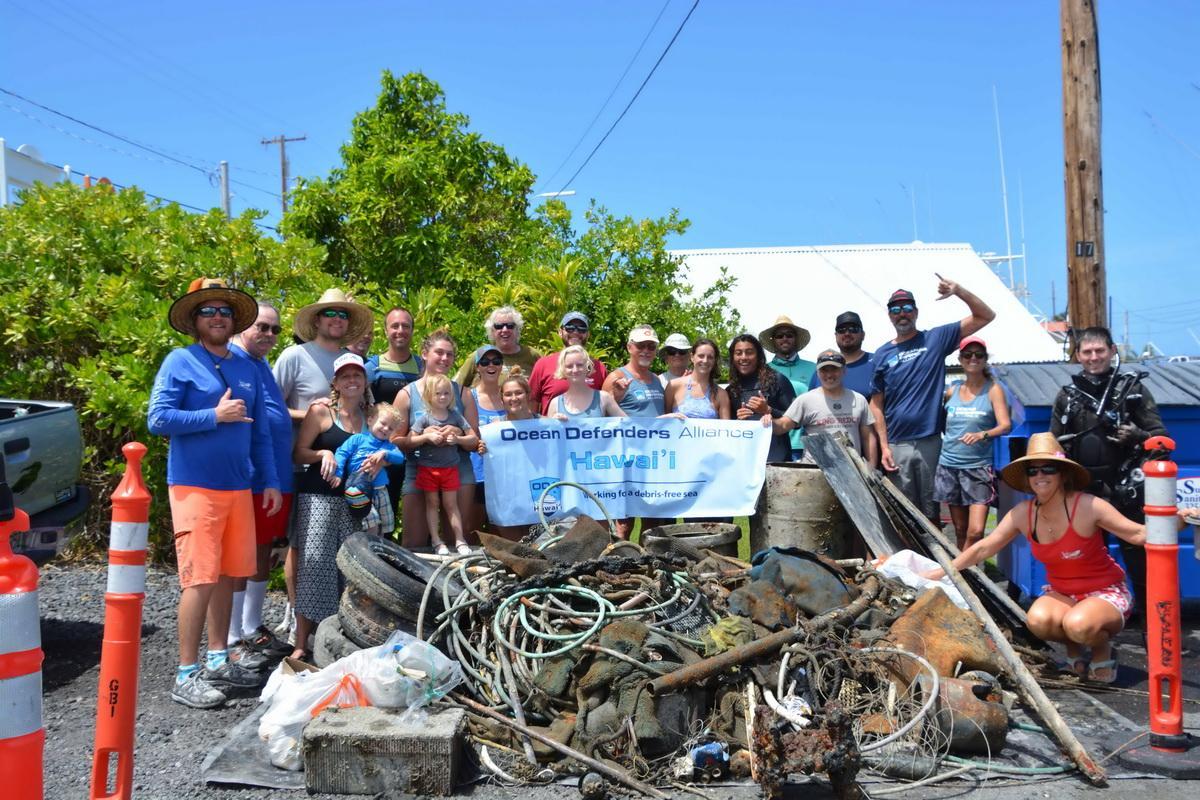 Thumbs up to Steve and Suzanne Ow of the Harbor Masters office, for letting us continue our efforts to clean this beautiful harbor.  They also made arrangements to have two signs posted in the harbor acknowledging ODA’s efforts.  Very nice! We’re proud of being given the honor and privilege to clean this body of water. 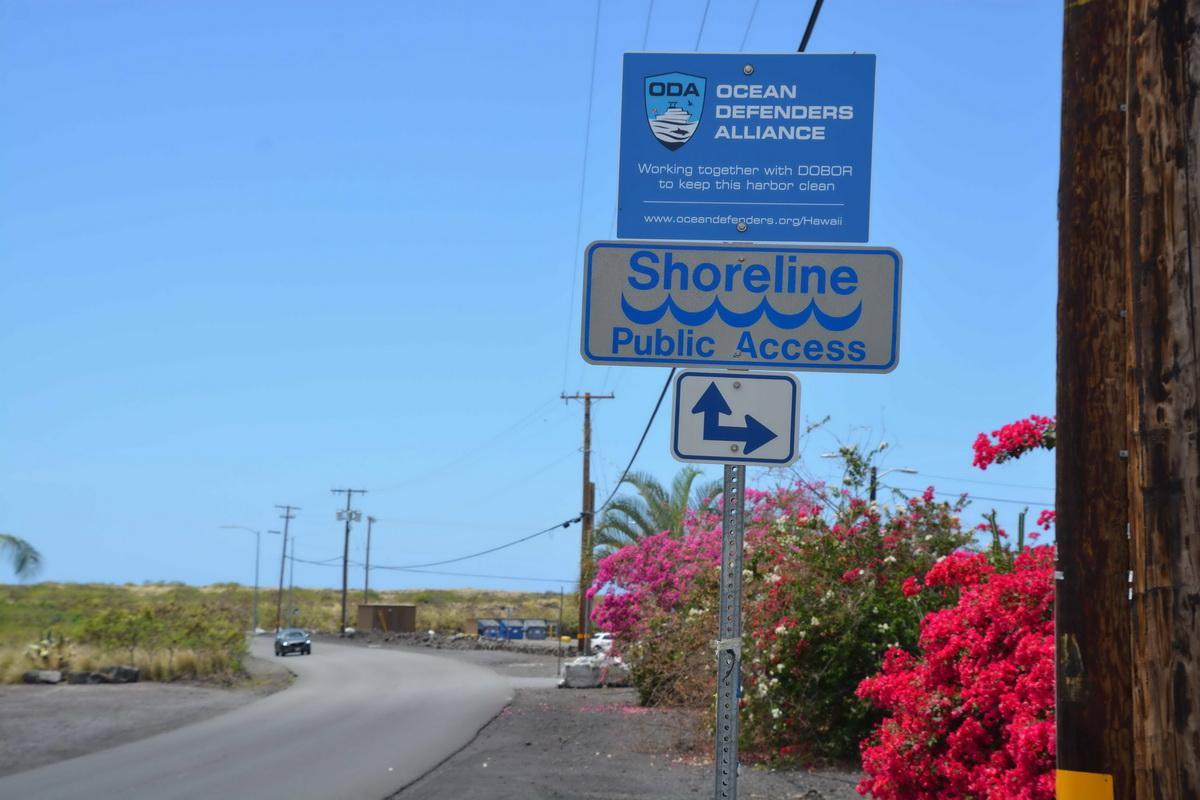 Thanks also to Allison Keith at Superior Sanitation who made arrangements to have two disposal bins delivered to the site and donated to us for the day.  It’s really commendable of them and inspiring to see a company that is involved in waste management come to the aide of our oceans! 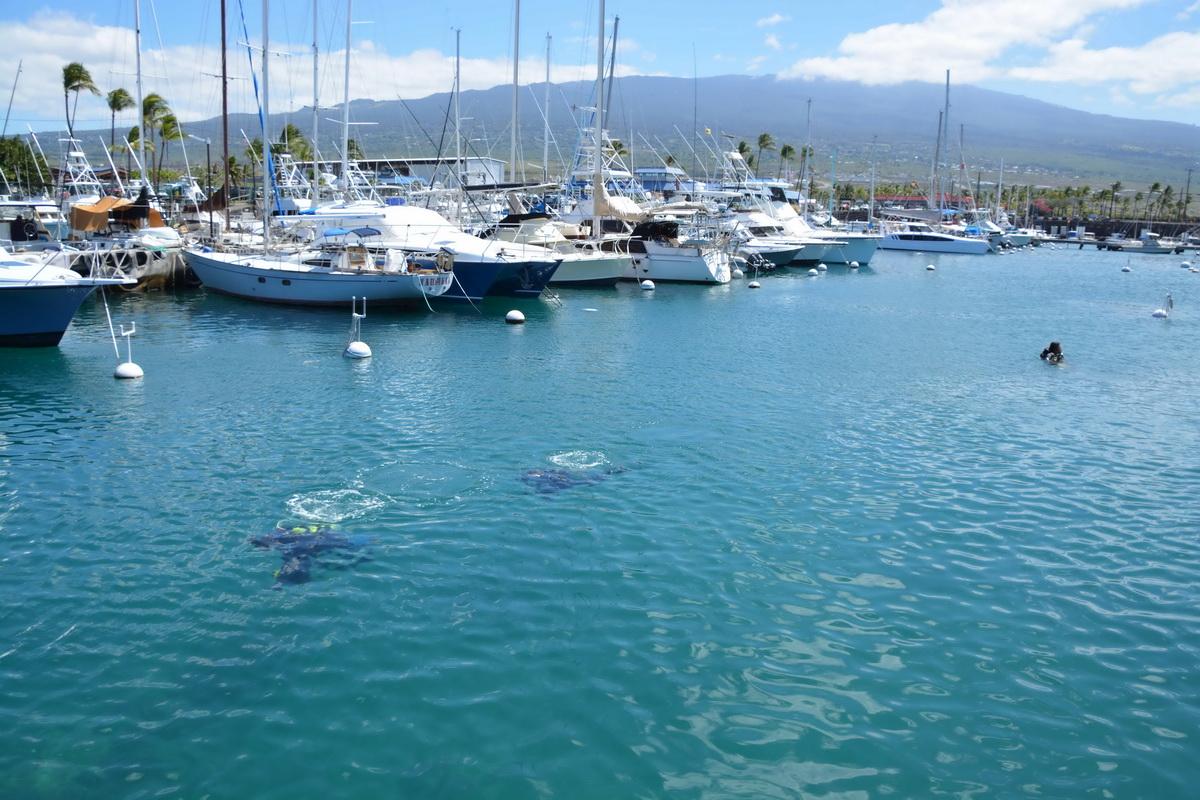 Thanks and appreciation to Jeff Leicher, co-owner of Jack’s Diving Locker, for putting together this awesome video. It’s fun to watch as the pile just grows and grows! 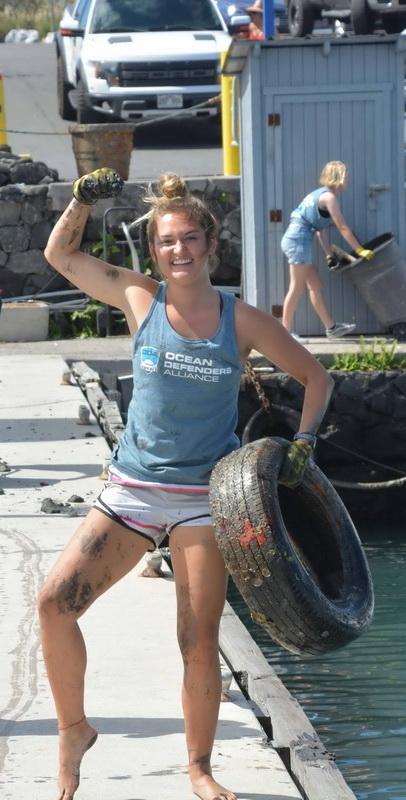 The crew from Jacks Diving Locker continue to be a huge part of the ODA family, and many of them showed up on their day off to join in the dirty fun.  As you see here, in the spirit of the day, Katelynn busting out her best “tire victory dance.”

That’s the fun attitude that prevailed on this day.  From a couple of two-year-olds, all the way up to us old folks, it takes a village of aquatic nuts to make a difference!

Hope you can join us for the next one…

Be sure to check back or stay tuned to social media -- we'll be posting the underwater images soon!

Watch this fun, time-lapse video! If we only moved that fast! ;-)