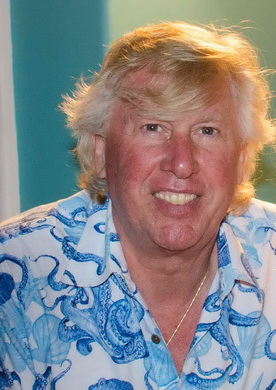 I was born in Chicago, Illinois, and my family moved to Cleveland in 1967. During my formative teenage years in Cleveland, I had the privilege of having Lake Erie right in my backyard. My brother Jim and I bought a 12-foot sailboat with money we saved from our paper routes. This gave me the chance to get out on my own and learn about the nuances of winds, tides, and waves. I also spent many hours swimming miles up and down the coast as part of my workouts. While the swimming was getting me in great shape, there were a lot of times I’d come across huge schools of dead and dying fish. They had lesions and tumors all over them and they were often gasping their last breaths. This repeated personal connection with these suffering life forms left me with an innate sense that I had to do something to help them.

This happened at about the same time that the Cuyahoga River caught on fire. That river runs along the western edge of downtown Cleveland, only 9 miles away from where I was swimming. This incident was the catalyst for local and federal governments to create the Clean Water Act, Great Lakes Water Quality Agreement, along with the federal and state Environmental Protection Agencies. Before those laws were enacted, companies were allowed to dump their industrial waste and sewage directly into our water. When the river had 30-foot flames shooting up near the outfall pipes, the international press showed the images on their front pages and governments were forced into action.

My love of the underwater world continued to grow as I started scuba diving in 1975. However, the cold waters of Ohio were no match for the beautiful scenes I was seeing on television via Jacques Cousteau’s adventures throughout the world’s oceans. As soon as I could, I moved to California. That was in 1979.

Almost immediately, I got involved as a volunteer with several ocean-related organizations. Starting out with the Marine Forest Society, I worked on projects that experimented with efforts to restore kelp to areas off the Southern California coast.

I then spent time with Friends of the Sea Lion, in Laguna Beach, as a volunteer helping to nurse injured sea lions, seals, and elephant seals back to health for return to the wild. I also volunteered with Pacific Wildlife Project (PWP). PWP works with mostly pelicans that have become injured or sick, usually due to entanglement in fishing lines and hooks.

Then in 1992, in a Sea Shepherd Conservation Society’s (SSCS) newsletter, I read a small notice indicating they needed a photo archivist. Since photography was one of my most enjoyable hobbies, I answered the ad immediately. For the next 7 years I spent every Saturday working on that project and getting to know Captain Paul Watson, the founder and president. From there, I went on to crew on SSCS vessel, give educational presentations to dive organizations, and was the lead outreach volunteer in Southern California. In 2003, I joined the SSCS Board of Directors, serving in the capacity of Treasurer for 8 years.

It was through these various experiences and relationships that I became inspired to start an organization that would address the needs of the Southern California marine environment. Thus was born Ocean Defenders Alliance. (ODA).

ODA was started in 2000 with a donated boat and a lot of enthusiasm from local activists. We obtained official non-profit status in 2002. By 2004, we were out pulling abandoned lobster traps off the coast of Laguna Beach, Orange County. In 2007, Sea Shepherd donated a 38-foot boat to ODA. Renamed the Clearwater, she replaced a smaller boat we had and thereby providing a much bigger and more reliable platform, allowing ODA to carry more volunteer crew and remove more abandoned traps and nets. In October 2014, we had to retire the Clearwater, and thanks to TV celebrity and animal lover Bob Barker, we were able to purchase an even larger vessel. At 50-feet long, Mr. Barker's LegaSea allows us to stay out at sea longer, carry more crew, and haul out more debris.

When I am not on or in the water, I love working in my indigenous California garden or enjoying music. I’ve been singing and playing the guitar since I was 6 years old. I have a broad range of musical influences: Pete Seger, Elvis, Johnny Cash, Bob Dylan, the Beatles, the Rolling Stones, Van Morrison, Pink Floyd, the Allman Brothers, EmmyLou Harris, the Ramones, Old 97’s, all the way to Billy Arcila! You will hear all of them and more while on the Clearwater!

In June 2012, I took a course at the Maritime Institute to learn everything it takes to obtain a "Master 100 Tons" captain's license. I gained a lot of knowledge about how a Coast Guard certified ship is run. I am now able to train our deck crew in skills that are invaluable and make our operations more efficient and safe.

I hope you will come on out and help us save more ocean life than ever before! ODA is doing a good job with what we have, but we can always use more hands on deck. You can help us help marine wildlife through your volunteer efforts and financial support.

Read the founding story of ODA.

return to Board of Directors