Time has been flying, and it feels like it’s been a while since I’ve caught you up on what’s happening within ODA… But: no updates does NOT mean no progress!

Our last outing with our big boat, Mr. Barkers LegaSea, was in early June when we dived a site outside of Long Beach, California, harbor. However, in the waters of Oahu, Hawai'i, we have been able to continue monthly cleanups, and will be posting an article about this tomorrow. 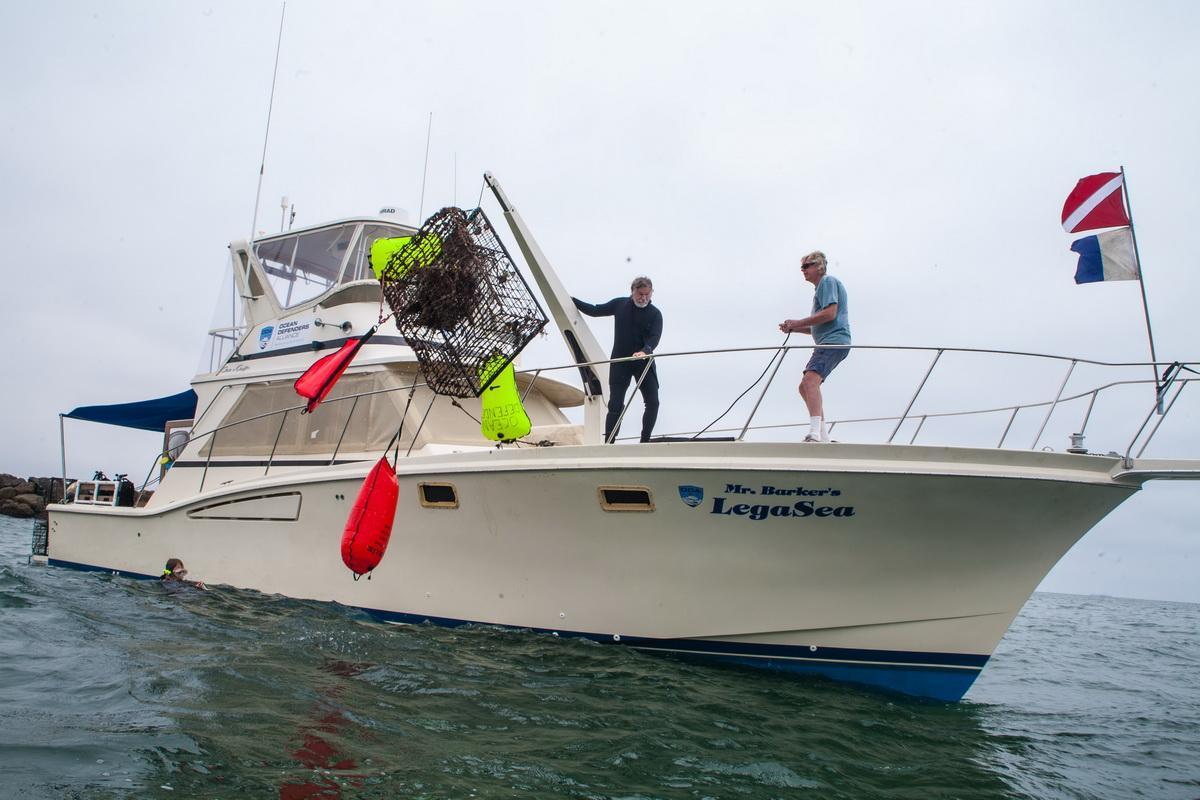 Shortly after that, on June 13th, I received word that we needed to have the boat hauled out of the water to undergo significant mechanical upgrades.

“What upgrades?”, you might be asking yourself. Well, late last year we submitted a request to the Southern California AQMD (Air Quality Management District) to have our engines and transmissions replaced. They have a program that helps boaters and truckers who use diesel engines to have their engines upgraded to smaller, cleaner-burning ones.

The AQMD has had this program in place for years, with the goal of reducing air pollution in the southern California area. They do this by removing and replacing the old and dirty-burning engines with more efficient ones. This program is funded by fines and fees imposed on oil and gas companies. They pay into this program as a kind of “PAY TO POLLUTE” proposition.

Our request was granted in December of 2016! We kept using the boat while we waited for all the parts to arrive. Then on the 13th of June, it all came together and we took boat to dry dock so that a marine services company could start removing the engines.

As of this writing, the engines and transmissions are out, and we are anxiously awaiting the next phase: installing the new gear. We are also having a much-needed new generator installed while all this work is being done.

Following is a picture of our old engines (before removal) and the engine compartments once the equipment was removed (and before we cleaned it). 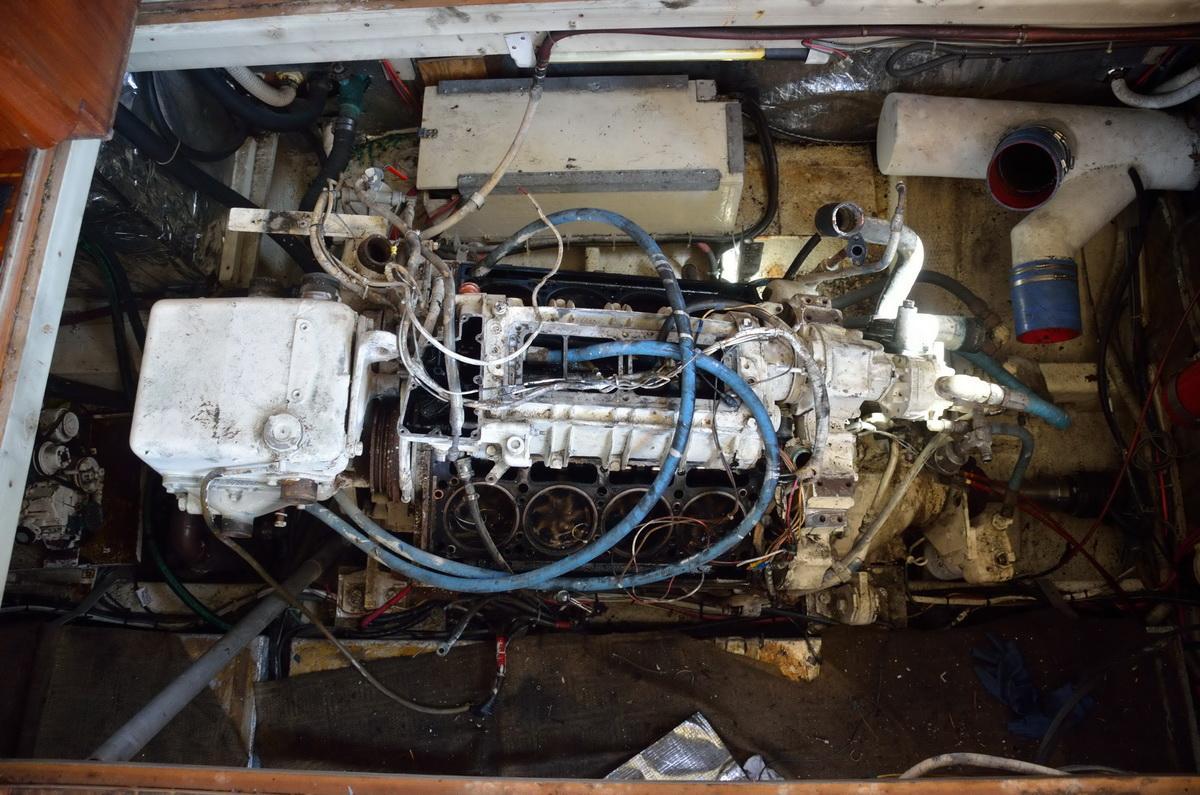 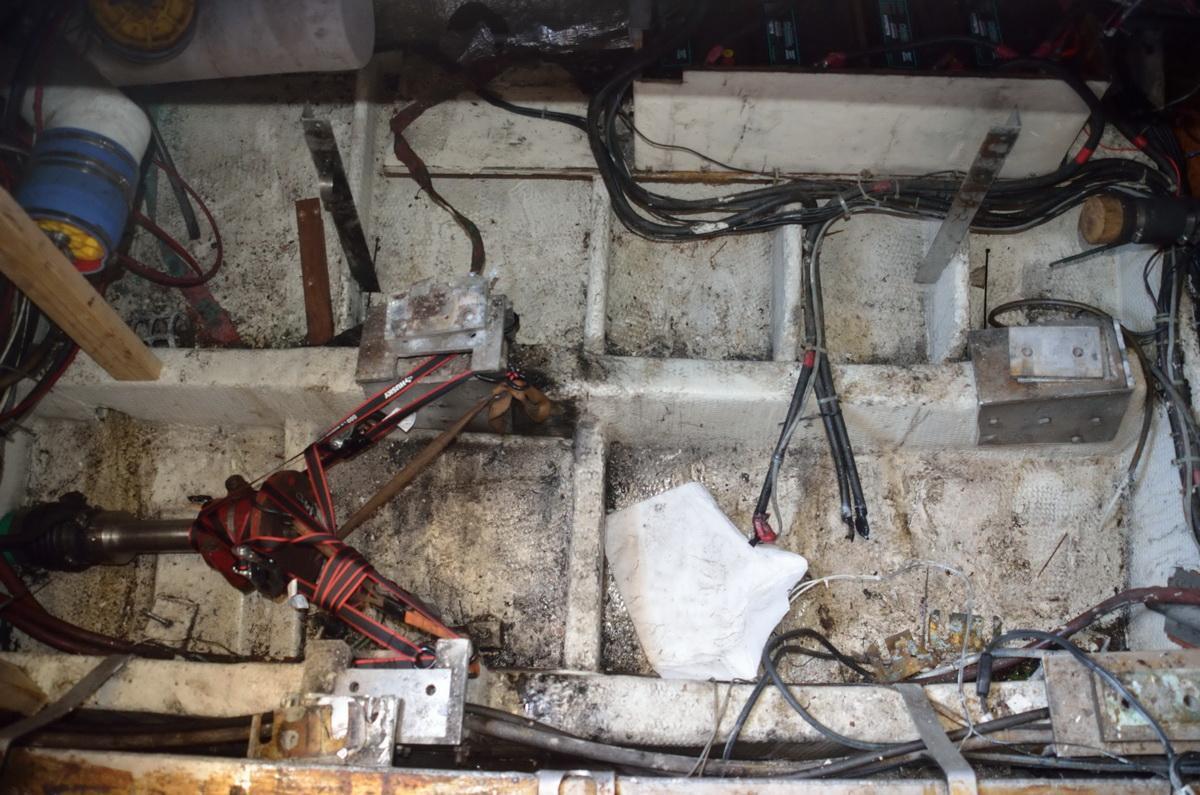 There is SO much support and logistical work involved in this process that I’ve been hopping all over the place—but when it’s all done, it will be SO worth it! We will have a much more reliable and fuel efficient vessel that will allow us to clean so much more of our coastal waters.

In the meantime: On July 6th, ODA Advisory Board Member Linda Nicholes and I took our small RIB (rigid inflatable boat) out into Huntington Harbor to remove plastics from the area. 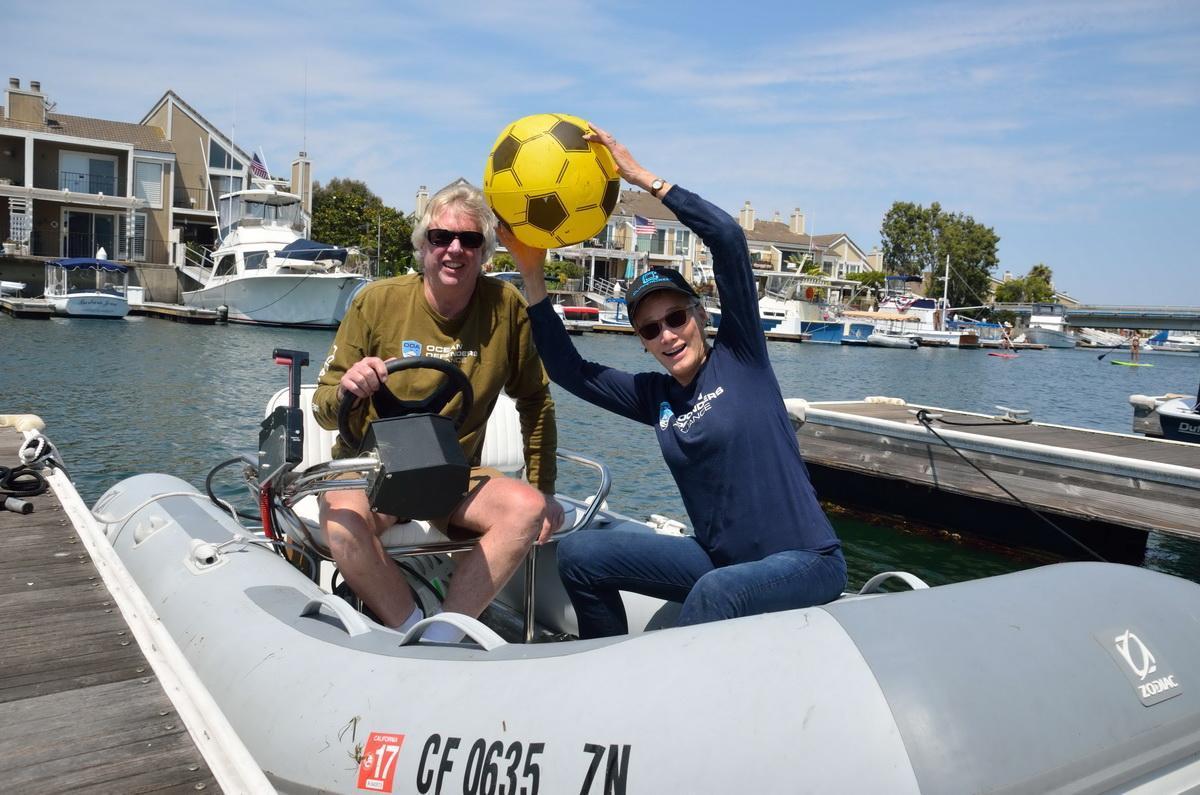 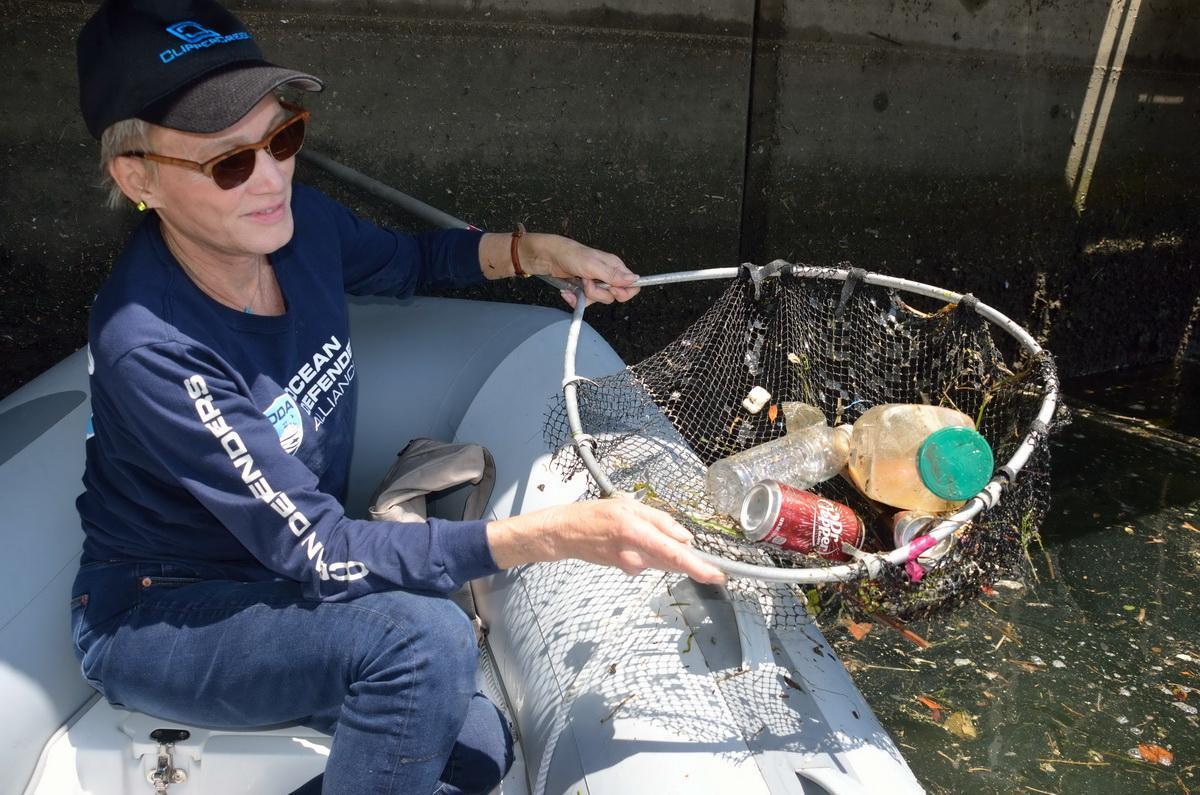 While there, we saw a seagull sitting atop a big piece of polystyrene. The hapless bird was picking away at it, thinking it was eating THE biggest batch of eggs it had ever seen! 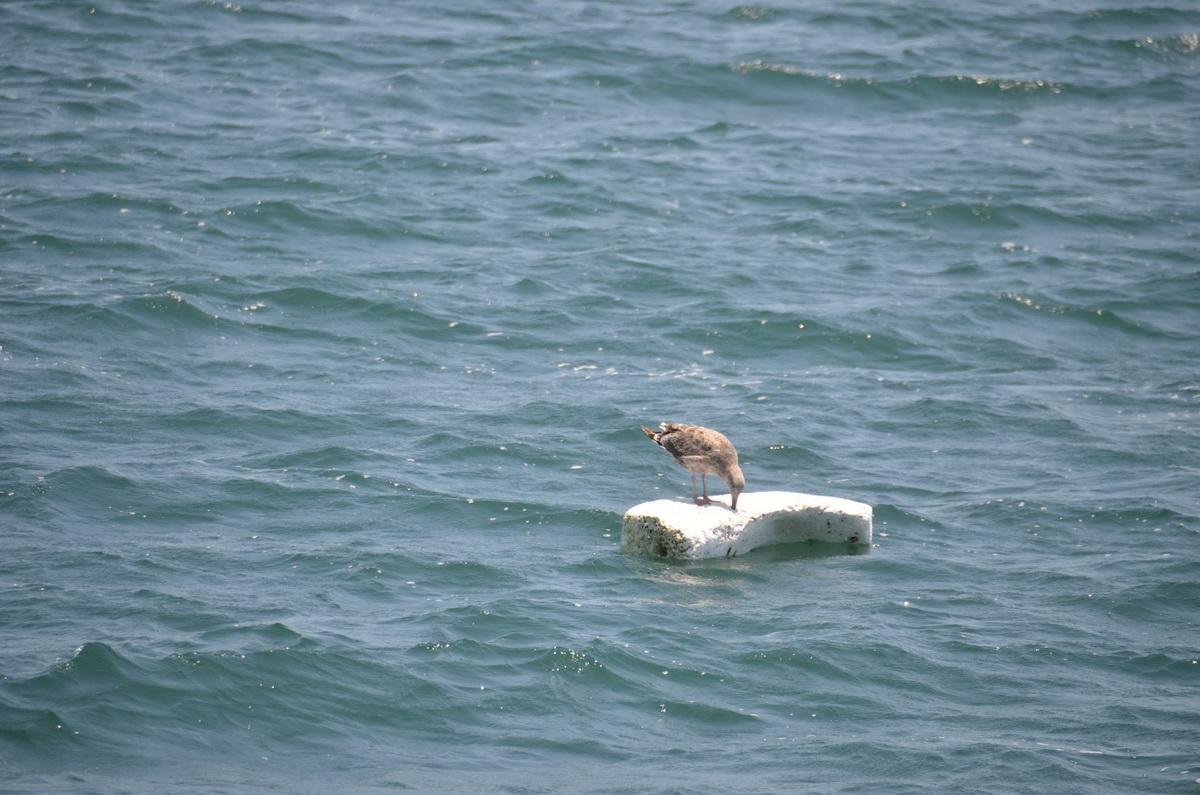 Sad to know that the pieces it was breaking off are just pieces of plastics that are going into its stomach…. I think you know how that ends.

We also saw a female green-winged teal, with seven of her days-old hatchlings following her around the harbor. What a beautiful sight! 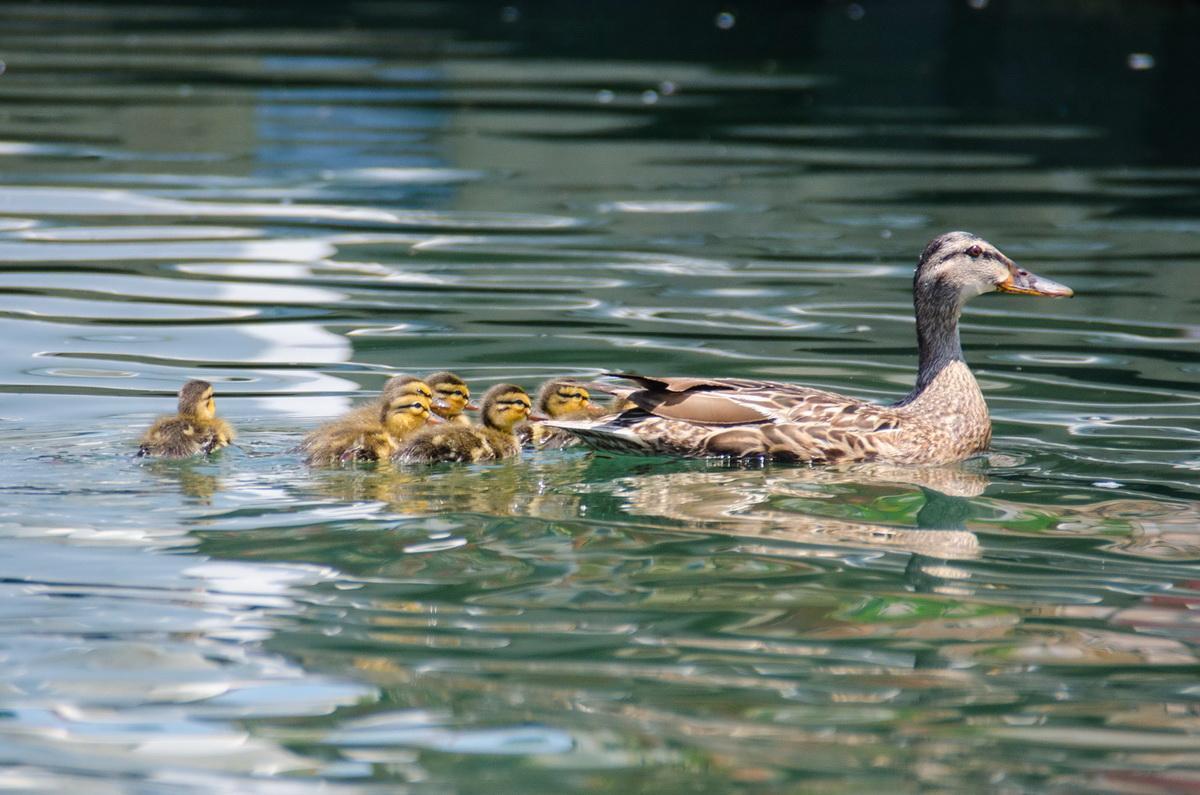 Also, on Saturday, July 15th, super ODA volunteers Al Laubenstein, Jim Lieber, Darlene Summers, Mike Wynd, and I, crawled into the LegaSea engine compartments and cleaned out all the oil and grease that had accumulated over the years. Then we washed and painted the compartments the following day. We want those new engines to feel like they are off to a  “fresh start” in a clean environment—and FOR a clean environment!

On July 6th, I had the honor of speaking to a dedicated group of Commodores at the Long Beach Yacht Club. This group is called the International Order of the Blue Gavel. There were about 25 people in attendance.

Then on July 12th, I headed down to Laguna Niguel where I met and spoke with about 30 divers from the South Orange County Dive Club.

Finally, July 26th found me in front of a packed room full of Patagonia staff and workers. Kim Jardine-Riley has a unique job at Patagonia: Amongst her other duties, she organizes the employees to go out in the community and help with a variety of restorations projects. She also invites speakers to come into the facility and talk to the Patagonia employees about a variety of activist organizations. 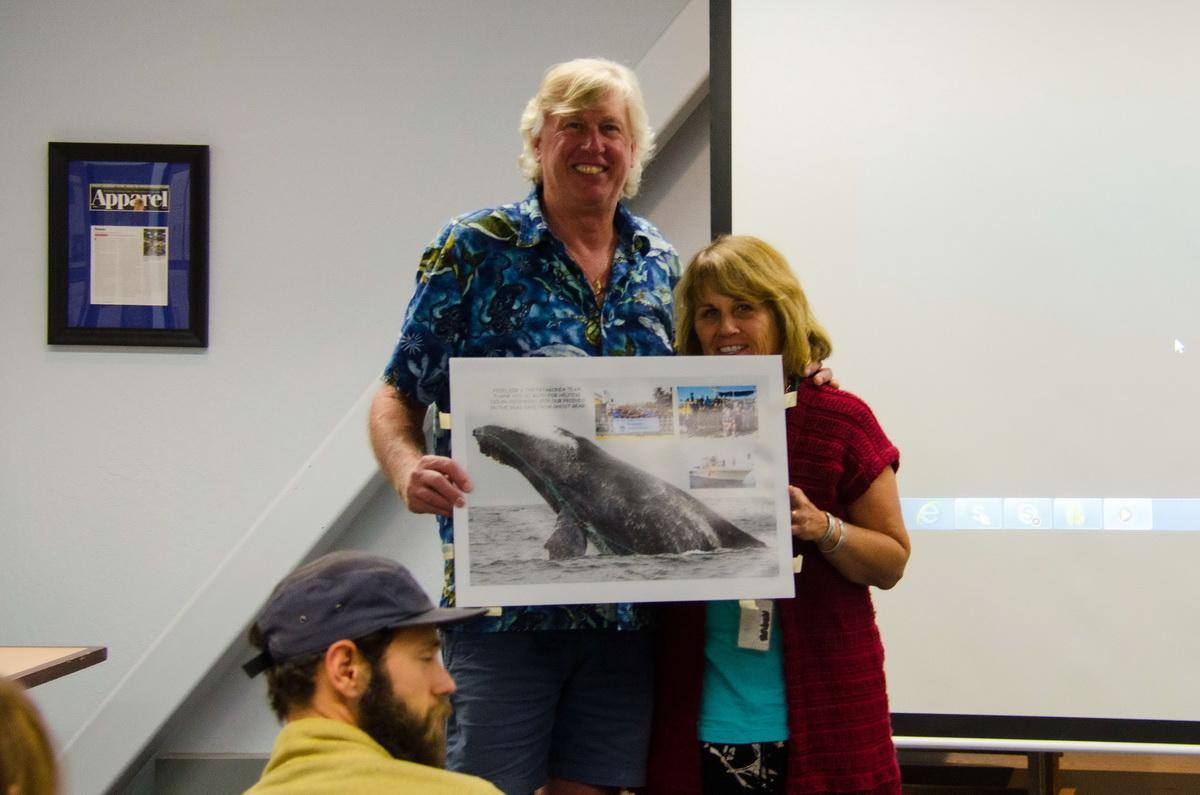 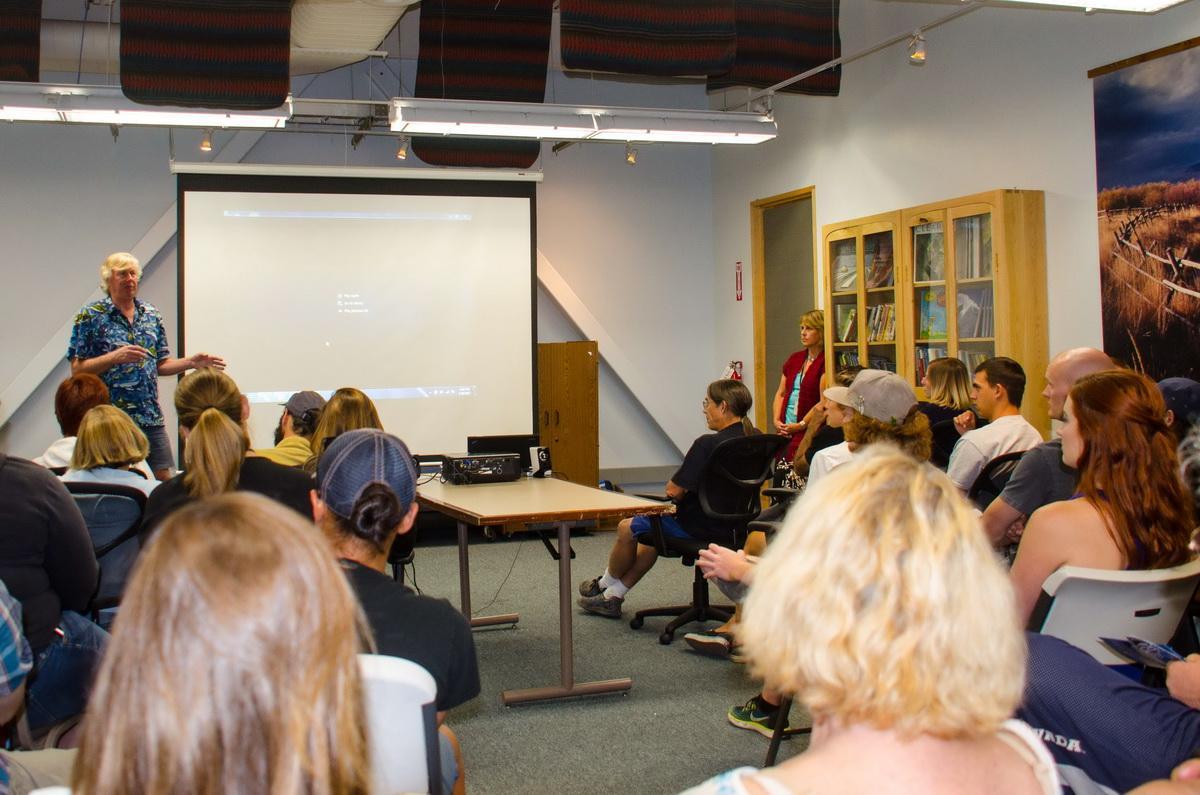 I had spoken to them in 2013, and was delighted to do it again. I can always tell if/when I get through to an audience during the question and answer period. The questions from these folks went on so long that we had to call it quits after an hour, due to them having to GET BACK TO WORK!  It was a pleasure spending time with everyone there.

While all of the above has been going on, two more whales became entangled in fishing gear right here in southern California. Both are humpback whales. One was found in San Diego on July 24th, and then on July 29th another one was spotted, this time off the coast of Palos Verdes, right around the corner from our boat slip. But…our boat is inoperable! ARGH!!

See below, our friends at DolphinSafari.com got photos of the poor creature (and see more pics in the photo gallery below the article): 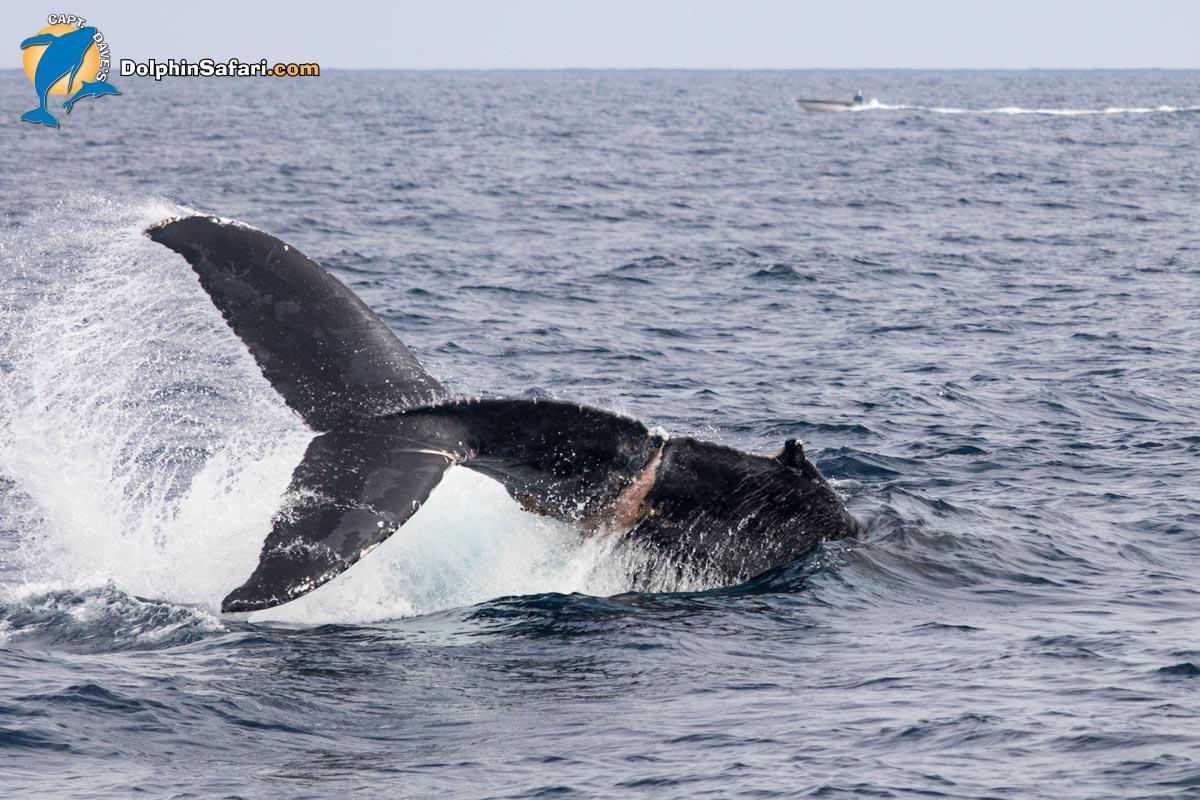 NOAA has trained several people throughout the region on how to safely approach and remove this gear from entangled whales; they are called the Whale Entanglement Team (WET). While ODA is not part of this hands-on team, we are part of the greater team that offers assistance to locate and track the whales until the WET can get to the site and remove (hopefully) this deadly gear.

Because Mr. Barker’s LegaSea is still undergoing repairs, we were NOT able to get out on the water and act as spotters for the NOAA Whale Entanglement Team. While this is extremely frustrating, in the long run we’ll be better situated to utilize the LegaSea for any and all projects that help ODA do our best to keep our waters safe for all our friends in the seas!

Well, that’s all the news for now. I better get hopping again!

If you want to “hop over” to our donation page and contribute to our ocean-cleaning efforts, we (and the humpback whales and sea gulls and green terns and all of the other marine animals!!) will be very appreciative!