You don’t have to be a scientist to understand some simple facts about some complicated chemicals.

And I promise I’ll stay out of the weeds as I explain this to you!

A recent study released by Science Magazine reveals that one particular chemical used to make tires is directly responsible for killing coho salmon.  The chemical is known as 6PPD and is used as an antioxidant. 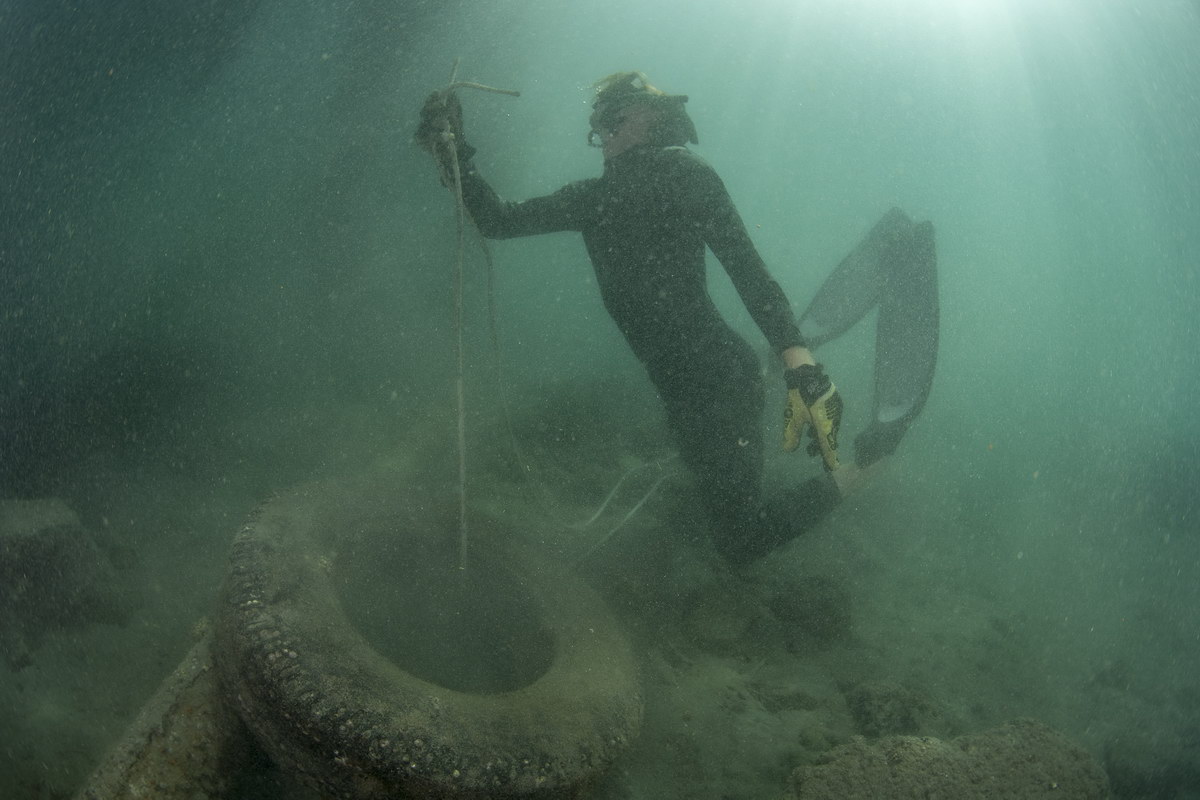 This is a huge revelation, as scientists have been trying to understand why up to 50% of the coho that reach their spawning grounds have been found dead, before they even have a chance to spawn.

Here are a couple of keys sentences from the abstract that was released by Science:

Coho salmon are an iconic animal that have a unique ability to live in both fresh and saltwater.  They’re born in freshwater streams and rivers, migrate to the open ocean where they spend most of their lives, and then return years later to the same areas they were born into mate and spawn.

But for years they’ve been dying in those same rivers and streams before they even have a chance to create the next generation.  Scientists who study the salmons’ life cycle have analyzed the dead animals and find that almost all of them died before releasing their spawn.

As you can imagine, this is having a devastating effect on the coho salmon populations.  The Endangered Species Act (ESA) lists them as either “endangered” or “threatened”, depending on where the particular species is located. Either status means they are a protected species under the ESA.

The Facts are Straightforward and Clear

Coho are found in the waters of the west coast of the US and Canada, from Alaska, all the way down to Monterey, California.

Here are a few interesting tidbits I’ve been able to find from reading a slew of articles about this:

Cars and trucks are ubiquitous part of the human experience.  I see no reasonable way to get them out of our lives.  What we can do is minimize their impact.  It’s estimated that there are over 200 different chemicals used in making tires.  No one has studied the potential impacts all those chemicals can cause to our environment.  Seems like every time some scientist takes a closer look at one chemical it reveals itself to be not as benign as originally expected.

What we must do is learn from our mistakes, and this is one that just came to light.  While there are still coho salmon around, we need to put pressure on the tire manufacturers to eliminate the killer chemical and come up with a preservative compound that isn’t toxic to marine organisms. 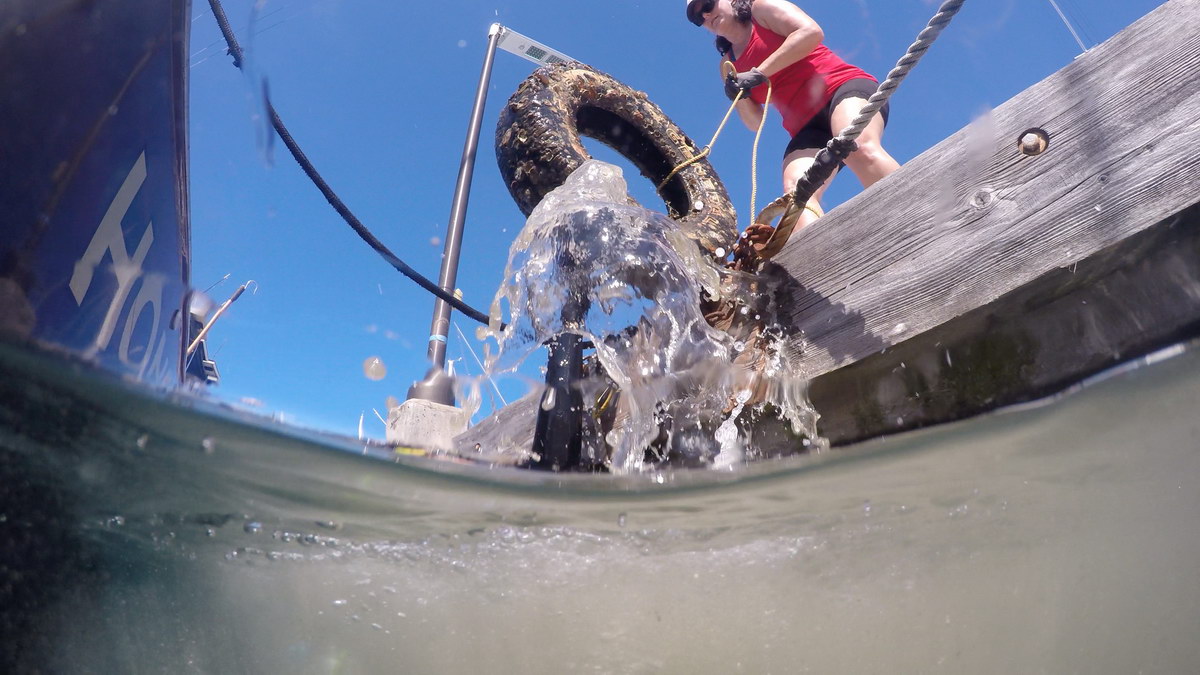 Volunteer hauls out tire. And we'll keep doing our part to help ALL the fish and marine wildlife!

One thing you can count on, if this single chemical is responsible for killing such a robust fish as a salmon, it is invariably killing other fish and aquatic wildlife as well…We just haven’t looked for it yet.

ODA’s volunteers have been removing tires for a long time, and in the last two years we stepped up our game.  The first time we removed marine debris from Honokohau Harbor, on the Island of Hawai’i, we hauled out 35 tires.  Now we’ve removed 179! 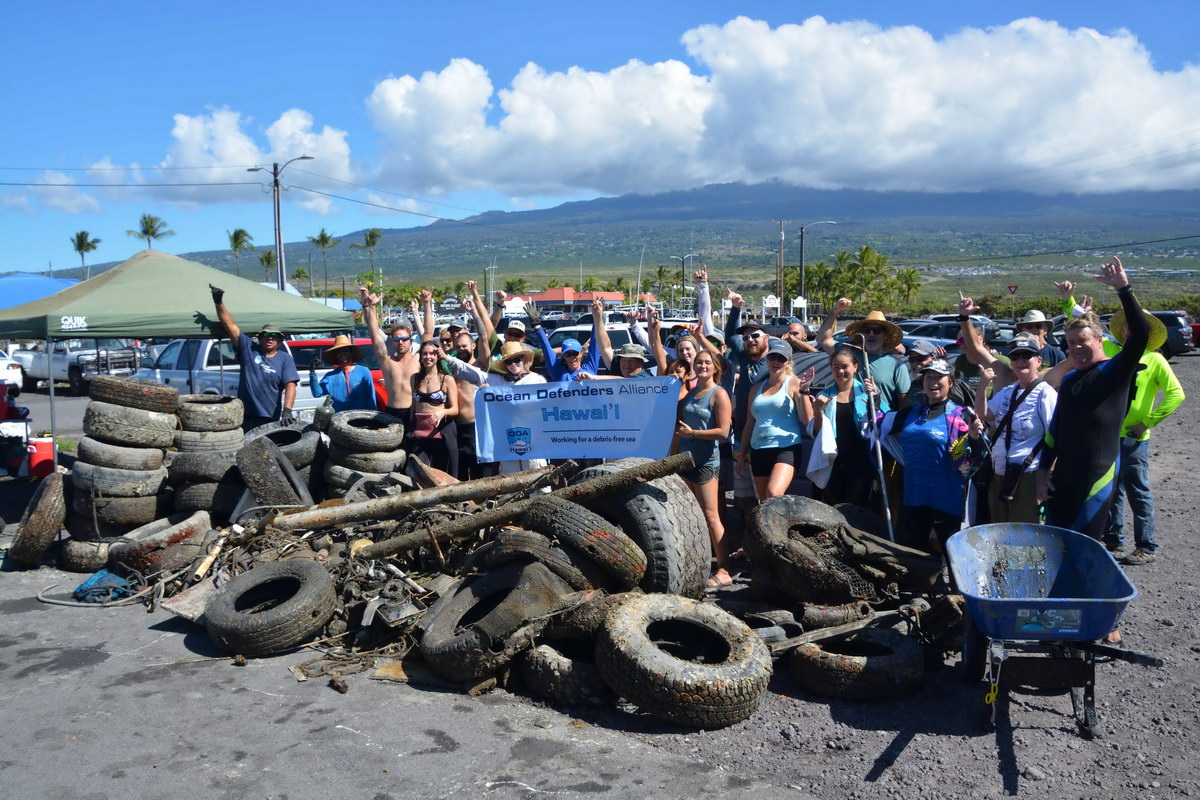 There are a few ways to stop rubber pieces from getting into our waterways.  One that’s easy and doesn’t use any energy is to create a “swale.”

A swale is nothing but rocks and dirt.  You can put one in right along a road or highway by digging a slight depression in the soil mere feet from the road, then place stones and rocks in that depression. 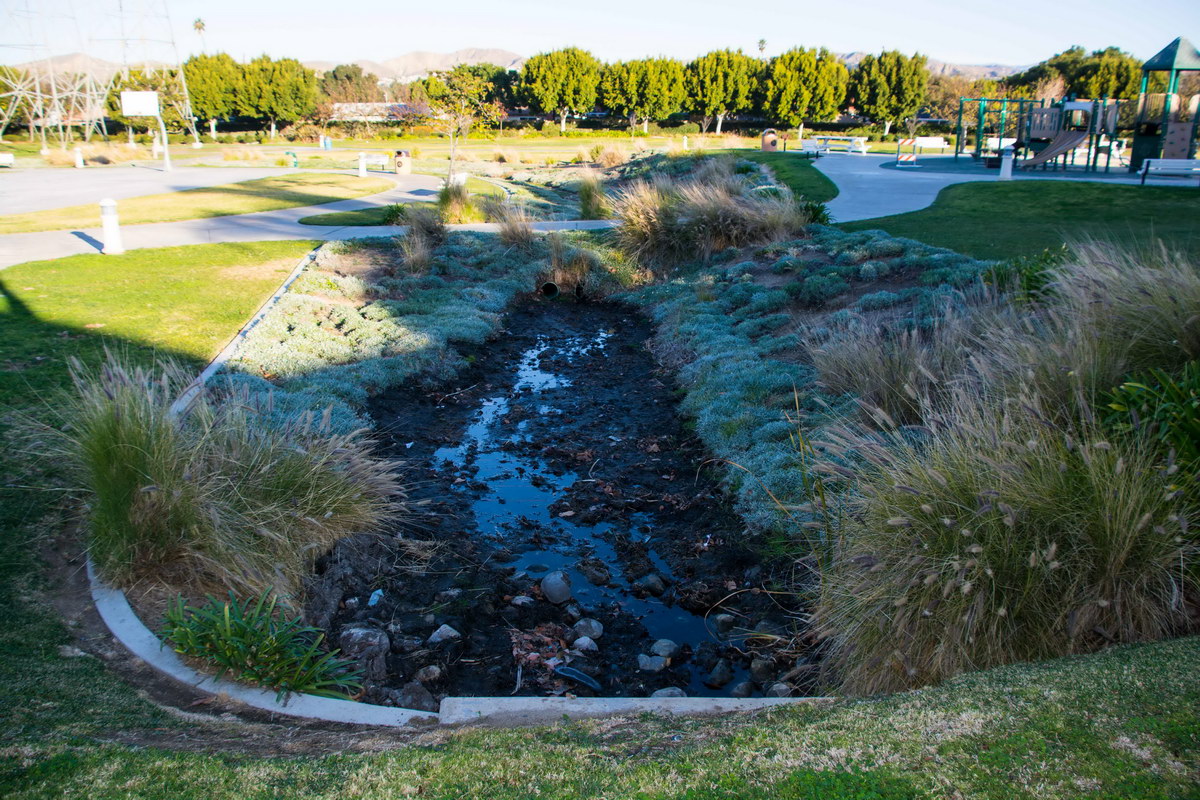 When the rains come, the runoff from the street goes into that area, then the water slowly percolates into the ground eventually ending up in the aquifer and leaving the rubber particles in the soil.

Another benefit of the swales is that it creates a habitat for plants, insects, and other critters.  I’ve seen beautiful wildflowers in them, as well as bees and hummingbirds that feast on the flowers. 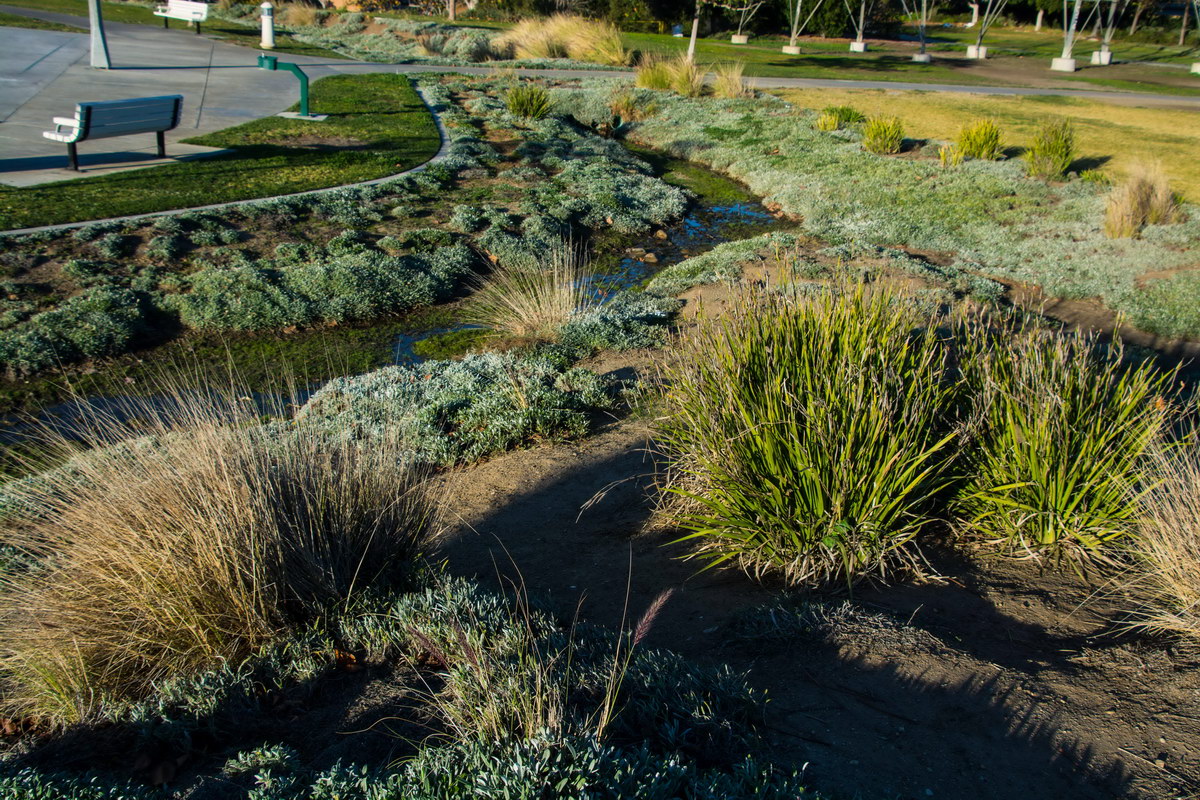 Where the Rubber Meets the Road

Another solution to preventing rubber particles from getting into the water is to coat a roadway with a rubber slurry that’s made from recycled tires mixed with asphalt and water.  This slurry is then applied to the surface of the road.

One company that processes the tires to make the road-covering material states that it takes 85 tires to coat a one mile stretch of a single lane (12 feet wide).

You can read more about Petrochem Marketing, Inc. that makes the Rubberized Emulsion Aggregate Slurry (REAS) in this Tech Transfer article.

There are several benefits to this approach.  You find a good use for recycled tires, the roads have better traction, so cars don’t skid or slip on them as much, AND the rubber particles are less likely to get into the water system during rains.

In addition to the road becoming much quieter to ride on, because the slurry is porous the particles don’t run off when the rains come, they seep into the surface coating and stay there.

One city in San Diego, La Mesa, started coating some of their roadways recently and it’s had a noticeable improvement on the quality of the roads, as well as reducing the need for asphalt repairs.  This saves the city lots of time and money.  During one project they recycled 20,809 tires!

You can read more about it this CalRecycle Report on the City of La Mesa.

I’ve ridden on some of those roads many times, and always marvel at how quiet the ride is.  Just more proof that when we put our minds, and voices, to it, we CAN make the world a better place!

Can’t wait to get back to Honokohau Harbor and start pulling tires! 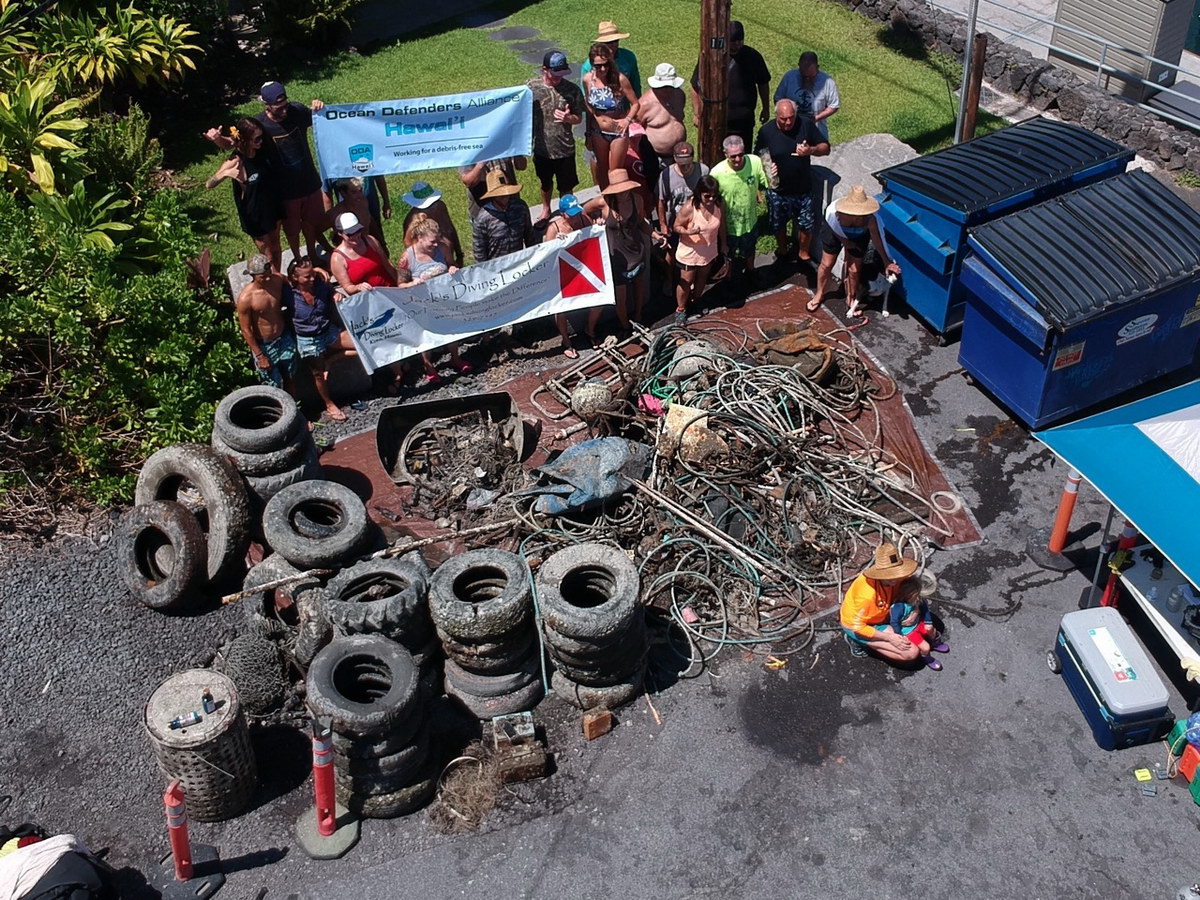 You can read more about the coho salmon die off from car tire pollution in this Guardian article.

And check out just a few of our efforts removing tires over the years, in this photo gallery below!