I left California for the Big Island of Hawai’i as Southern California was getting hammered by the winter rains.  The precipitation was sorely needed, but it also caused us to cancel our scheduled marine debris removal dives there for the last three weeks in a row.

Thankfully, conditions for ocean cleanup were better here in Hawai’i.  We’ve been planning to do our third Honokohau Harbor cleanup ever since the last one in September.  We have teamed up with the folks at Jacks Diving Locker, and with their help we had a great turnout of divers: 29 people participated! 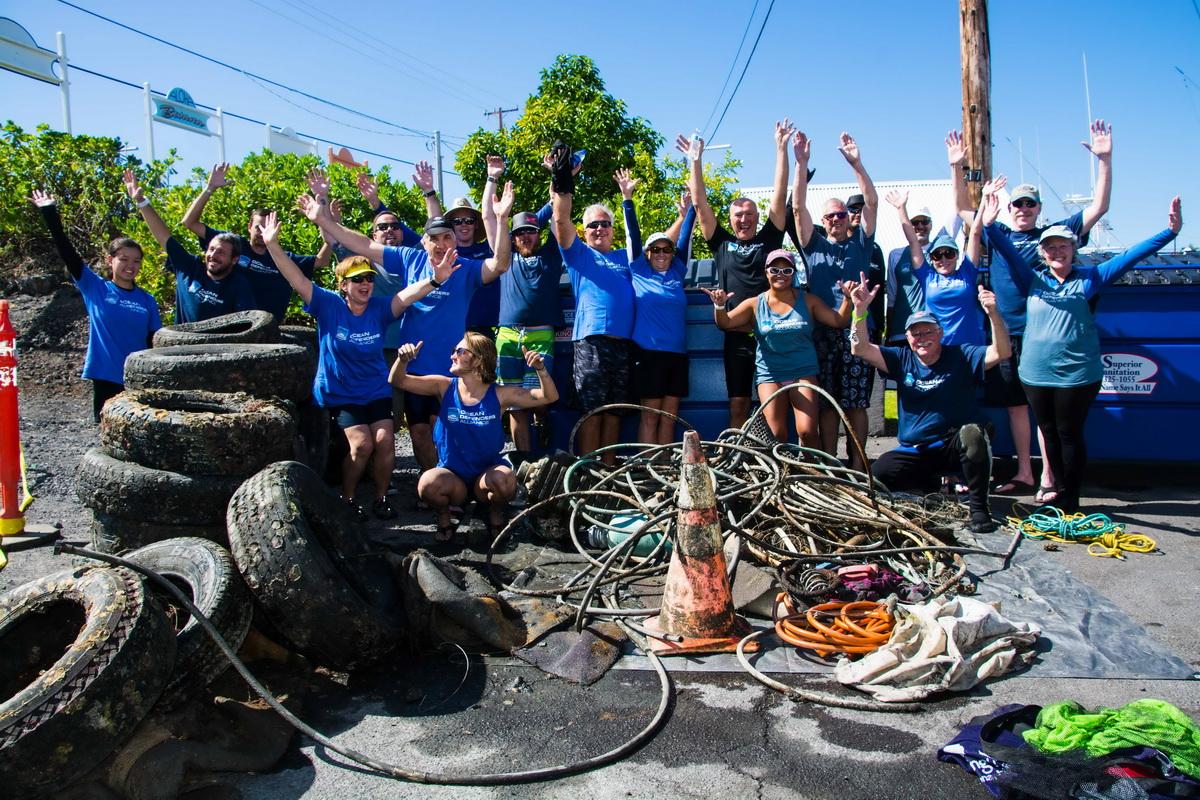 We’re glad to have so much help for this ongoing harbor cleanup project because as National Geographic explains, “Harbors can be one of the most polluted ocean ecosystems. Human activity from both land and sea contribute to the pollutants. Because harbors are partially enclosed, the pollution has nowhere to go. It builds up in both the seawater and the sediment below.”

The management of Honokohau Harbor does a fine job of stewarding the area and the waters, but often trash dumping occurs out-of-sight, and additionally, debris materials can flow into the harbor from other locations. We’re happy to be partnering with a harbor that cares!

We met at the boat slips in the harbor on Saturday, January 19th.  We had partly cloudy skies, and absolutely lovely weather.  Our plan for this cleanup effort was to remove as much marine debris as humanly possible during our two-hour time slot from an area that was below approximately 35 boat slips. We had arranged this with the Harbor Master, who had put out a notice to all the boat owners in the area that we were going to working there and not to move their boats during this time frame.  This allowed our divers to stay underwater and not have to worry about any potential boat strikes.

After the volunteers arrived around 9am, we reviewed how the topside team (the people on the docks) was going to help the divers haul up the debris they found. 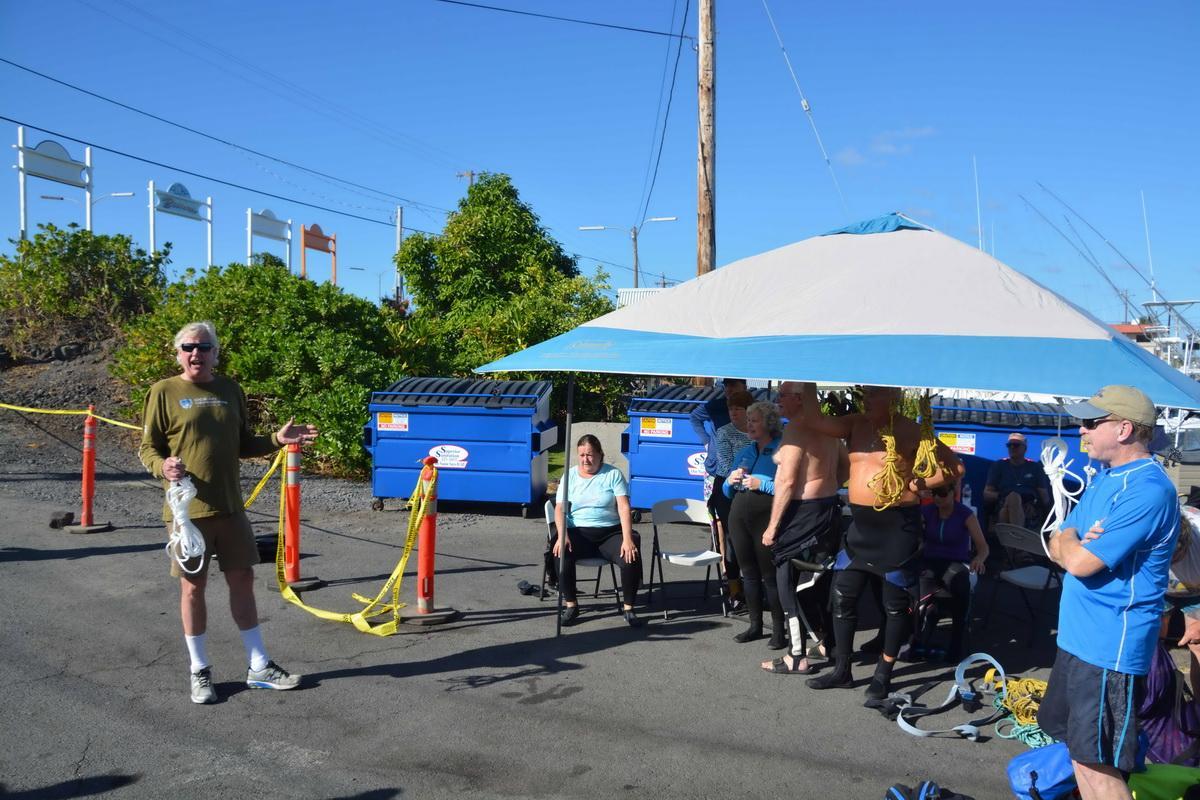 The divers started entering the water around 10 o’clock.

I’m very pleased to report that we had 24 divers show up! 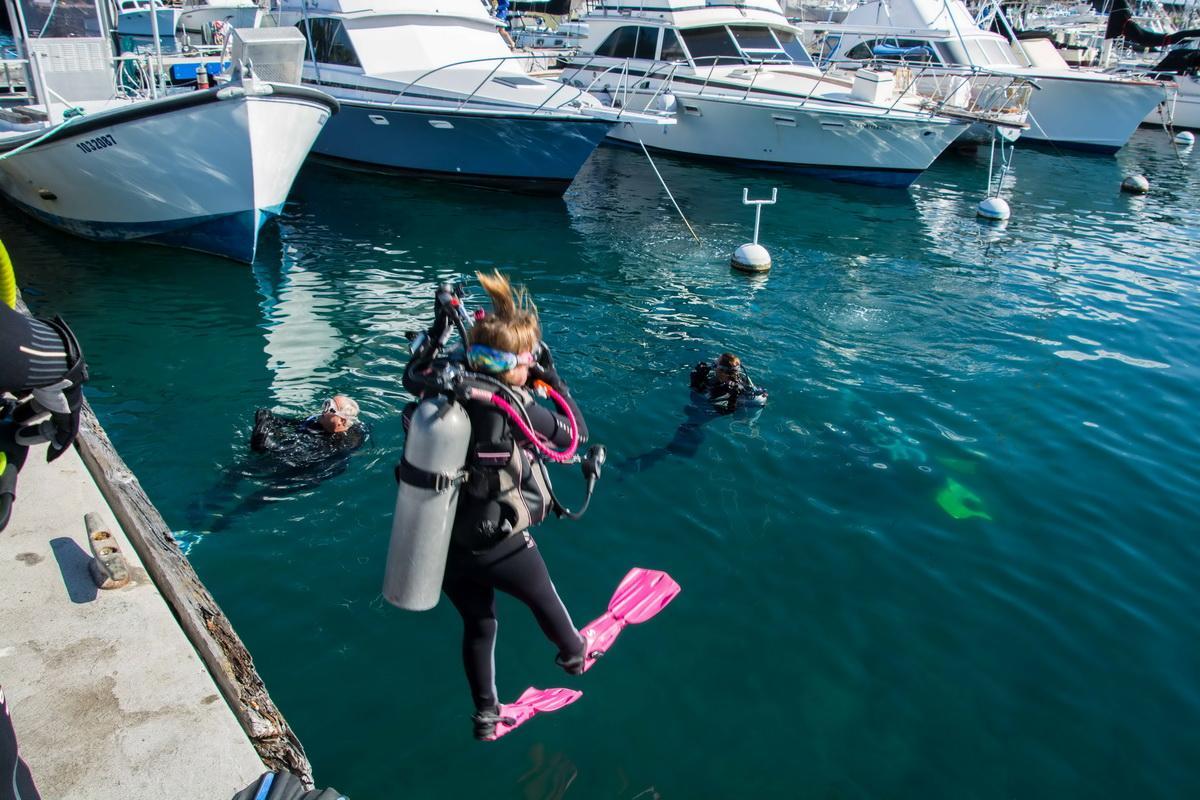 Here is the list of most of the participants; a few joined us when we were underway and as of this writing, I don’t have their names: AP Akaraporn, Zachary Block, Joe Bommarito, Krisha Bugayski, JC Cleary, Michael Cover, Marsha Cover, Bill Hassett, Joan Hassett, David Husted, Theresa Husted, Mao Johnson, Renee Klein, Madeline Komito, Steve Kroll, Michel Lamoureux, Christopher Lee, Teagan Maher, Monica McNamara, Daniel Piccuta, and Jim Twigg.  Joe Weston rounded out the dive team and took his underwater (UW) camera with him.  Please keep your eye on our Facebook page and we’ll let you know when we add his images to this article.

Amongst this ocean-defending crowd were seven divers from the University of Hawai’i. It was a treat to have so many young people turn out. The picture just below shows six of the students: 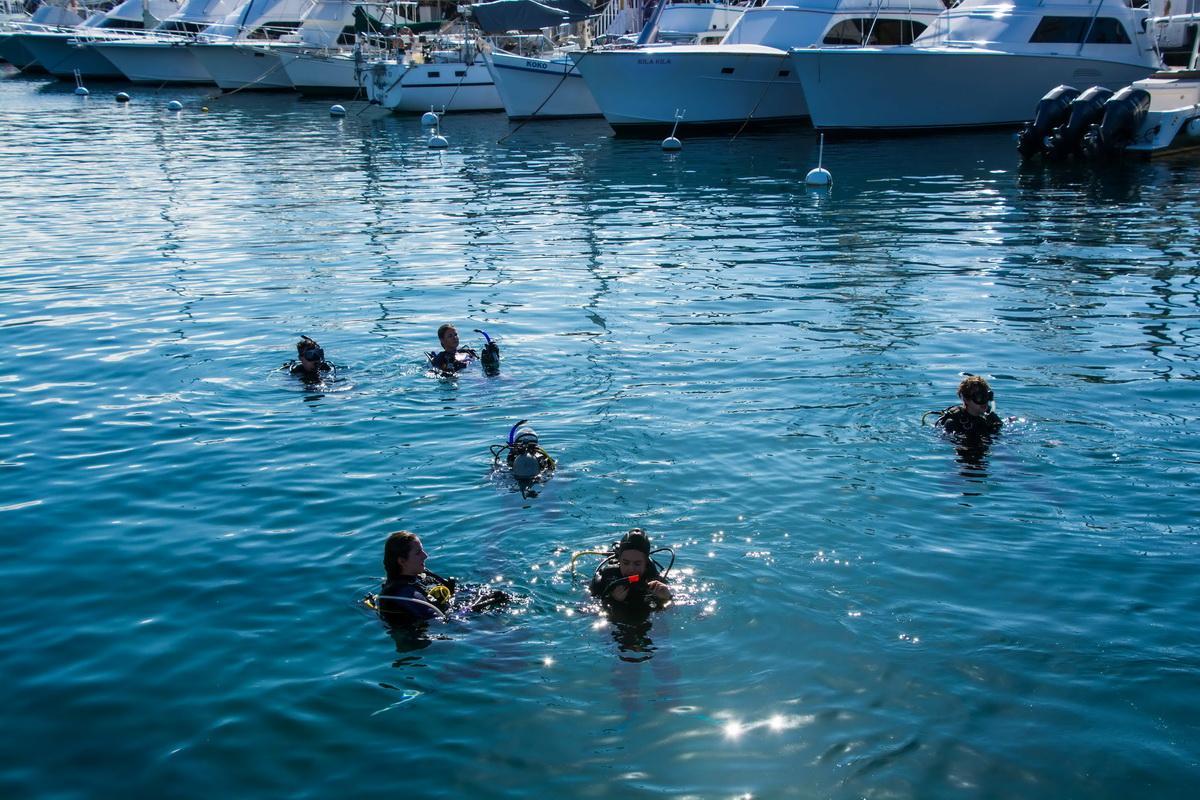 Jack’s Diving Locker’s Matt Bogdanovitch (USCG Captain and PADI Master Scuba Diver Trainer) along with three other people from the staff at Jack’s and I were on the topside team. Our job was to haul up all the booty that the divers found.

Below is a photo of Matt and I with some of the haul. This turned out to be no small task, I’ll tell ya! 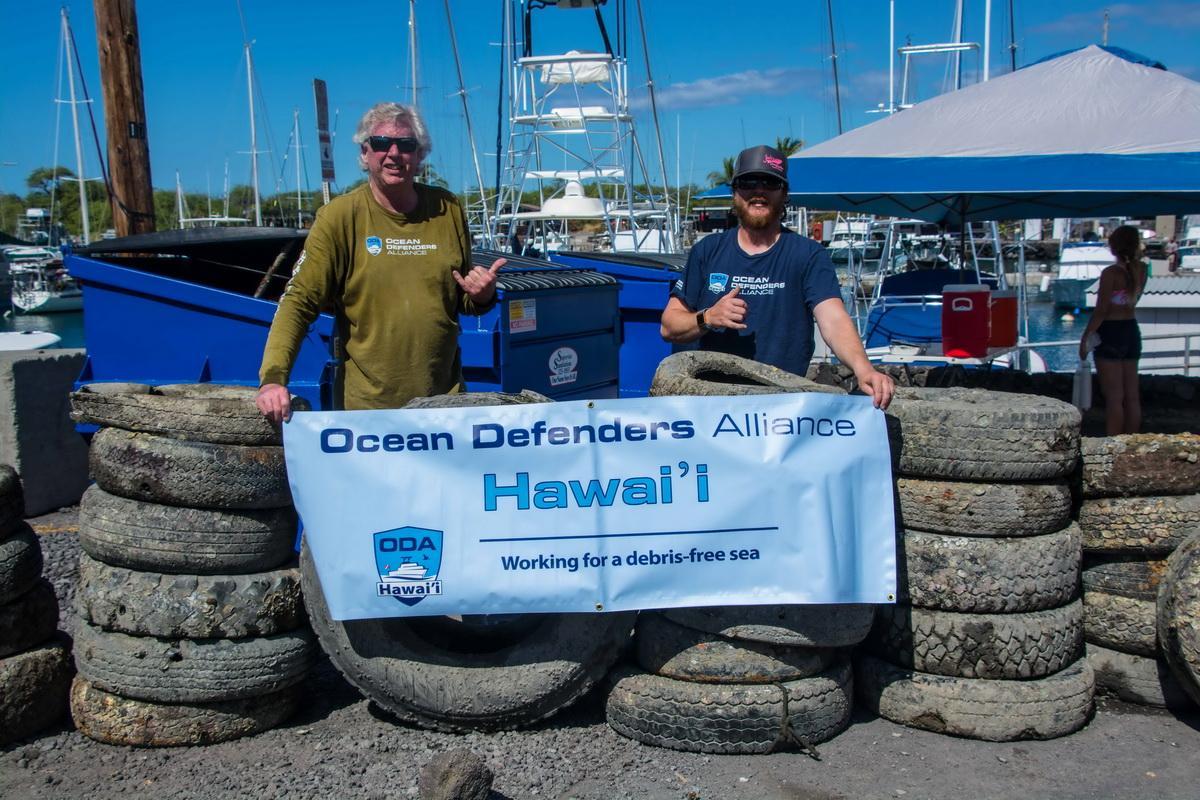 The Harbor Harbors Lots of Debris 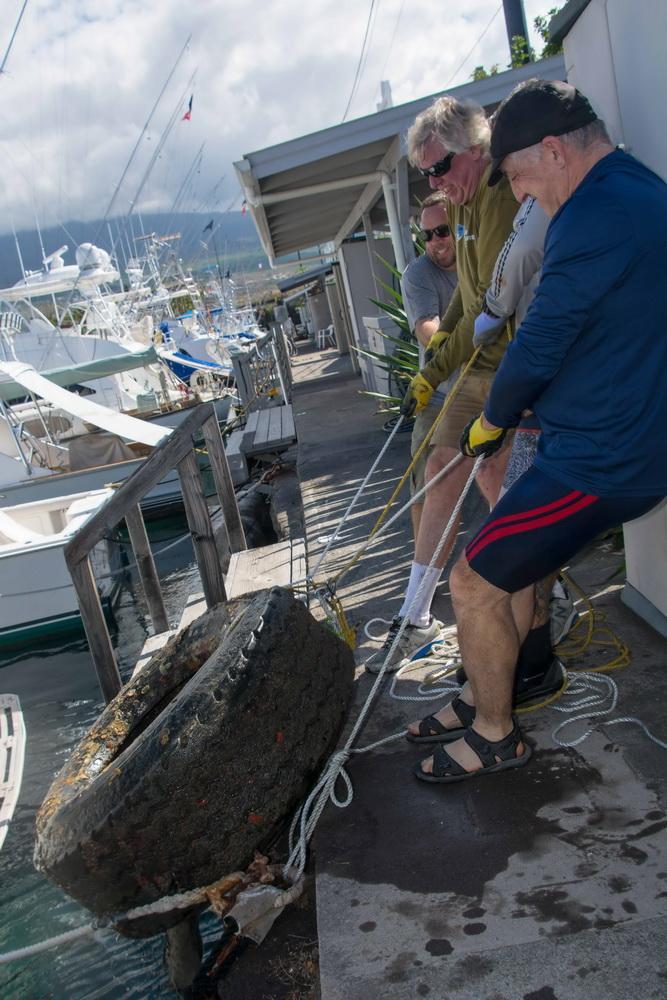 Within minutes of the first divers getting in the water we were hauling up tires on to the docks.  With 24 divers finding all kinds of debris, the deck crew quickly got overwhelmed.

At one point two divers surfaced and said they had a really big tire and it was kind of buried in the mud.  I told them to attach a line to it and I’d try to help them get it unstuck.  Ha!  After 30 seconds of tugging I had to call for help.  Soon we had four guys heaving on three lines we had the divers attach.

Turned out that this was a tire that seemed to come from a tractor.  It was not only filled with water, but mud as well.  It must have weighed 300 pounds.  We finally got it up onto the dock, with a lot of sweating a few choice words that aren’t fit to print….

As we rolled it back to our drop off area, the team was all smiles.

Terrible Tires and Scads of Other Hazardous Objects

Matt and his team were on the opposite side of the boat ramps, and I could see they were even busier that we were.  When I walked over to that area, I saw tires, tires, and MORE tires!

In addition to the tires, there were pieces of mats and carpets (that smother life on the ocean floor) along with hoses, wires, and ropes (that can entangle marine life); and miscellaneous pieces of wood and equipment. All of this does nothing good for the ocean environment. So out it goes! 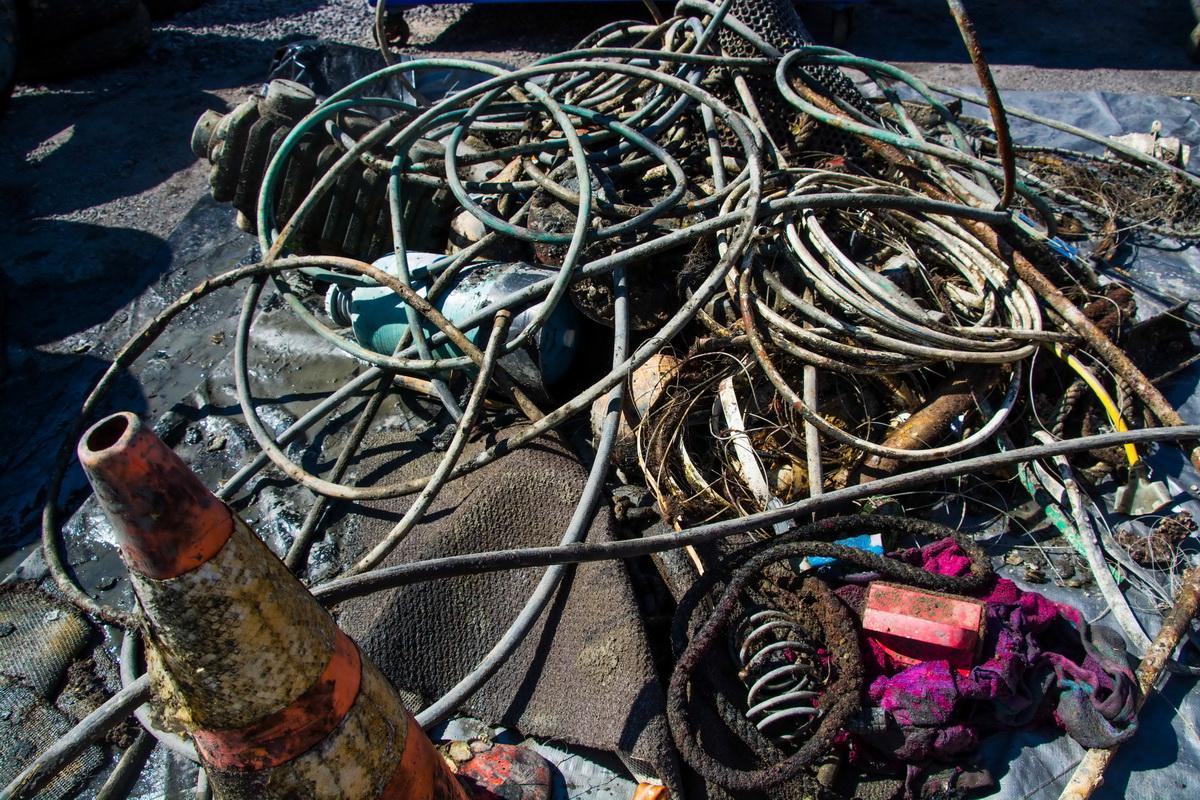 The chemicals that make tires slowly leach into the water over time.  Animals that come in direct contact with the tires absorb those toxins through their skin.  Animals that lay their eggs on the tires, like octopus and nudibranchs, show high rates of deformity because the eggs are extremely susceptible to those toxins.

The tires wreak multi-faceted havoc in the oceans because in addition to chemically polluting the waters, they get tossed around like leaves in the wind when storms create big and powerful waves.  They can obliterate a coral head with one strike.

By 11:30 all the divers were out of the water, and we started the hard work of getting all that debris up off the docks and to our staging area.  When that was done, we went back and cleaned up the docks of all the mud and gunk that we had left behind.

Kudos to All Until We Meet Again

Even though we were all worn out at the end, everyone told me they had a great time, and wanted to know when we are going to do it again.  It will most likely be in May but stay tuned to our Facebook page and you can also keep your eye on our online calendar.

Thanks to this GREAT team of volunteers, we’ll be back for more! 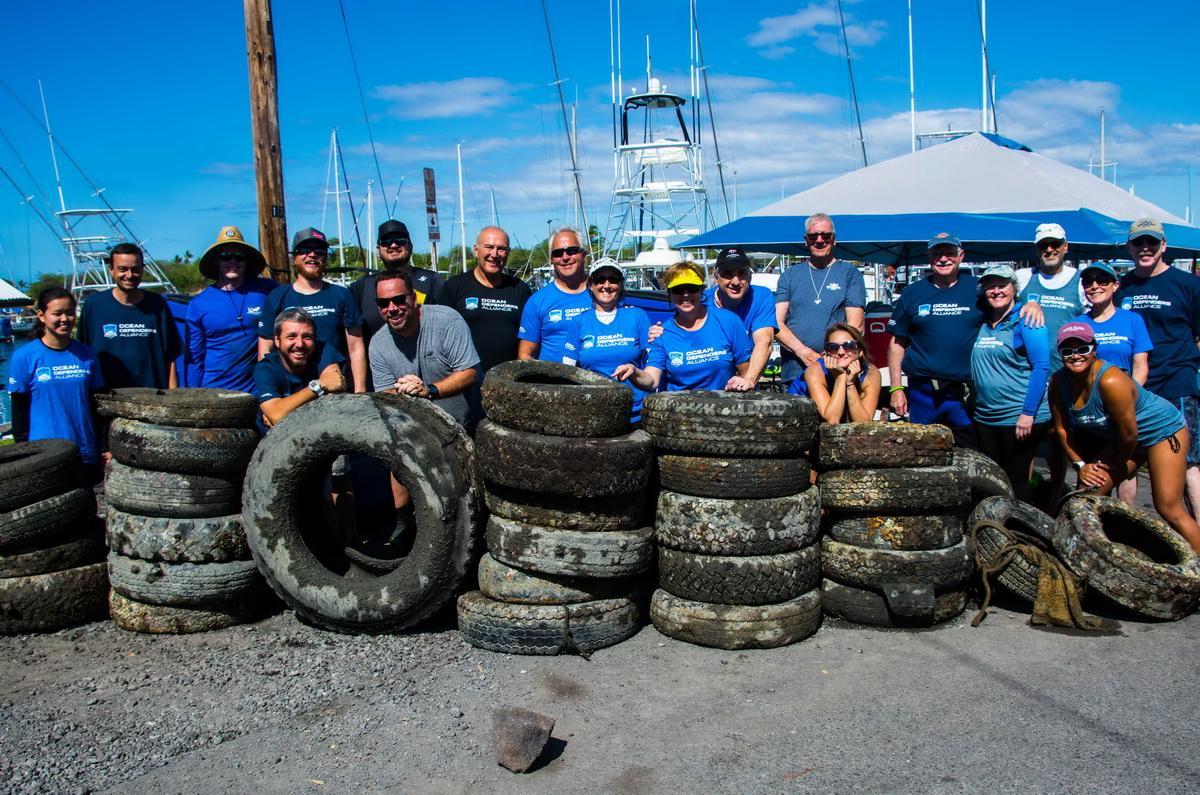 I want to express our gratitude to Teri Leichter, Sarah Matye, and Matt Bogdanovitch from Jack’s for helping coordinate all the volunteers and for providing the tanks and weights.

Much appreciation goes to Allison Keith at Superior Sanitation for donating the disposal bins, having them delivered to the site and then hauling the debris to the dump.

We are also thankful to Steve Schmelz and Suzanne Ow at the Harbor Masters Office for all they did to make sure we could work specific areas of the harbor without boating interference.

3000 pounds of toxic material is now out of the oceans, for good!

The area we worked in was about 50 feet wide by 300 feet long (about 15,000 square feet).  We are systematically going over every inch of the harbor.  Even though this awesome team removed an amazing amount of debris, we need to redo this particular area again.  There was just too much debris for us to call this finished.

Won’t you be a part of our next harbor cleanup? You don’t need to be a diver, you just need a few hours of time and the willingness to get a little dirty (but guaranteed you’ll have a lot of fun and go home with the satisfaction of being part of something good).