As you might know, Ocean Defenders Alliance (ODA) has been partnering with several dive shops in Hawai’i.  We charter their boats at a reduced rate and crew-up the boats with our volunteer divers who go out into the blue waters to remove man-made debris.  Mostly nets, lines, and ropes.

Unexpected “Catch of the Day”

On September 5th, one of our partners, Jacks Diving Locker (JDL)—of the Big Island of Hawai’i—was out on the water with a boat full of advanced divers who were there to enjoy the underwater sites. 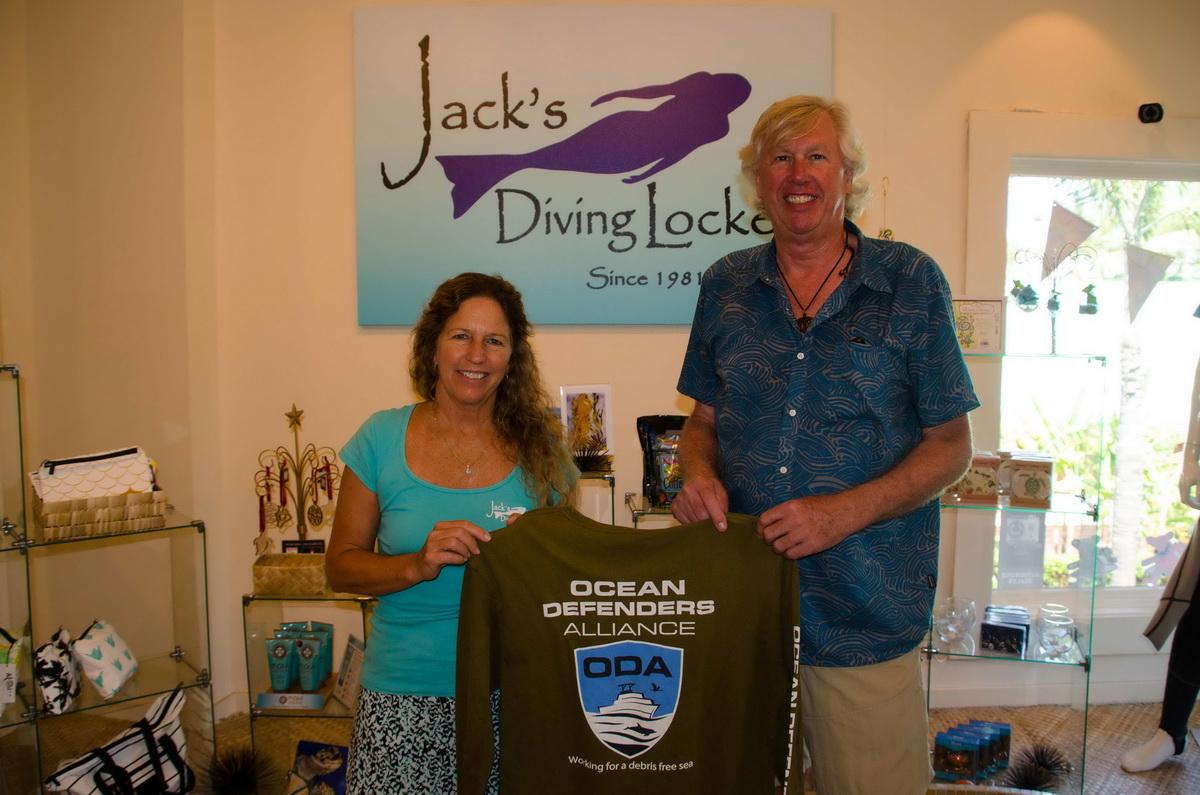 After they had completed their two dives, they were heading back to the harbor, when the boat crew saw a bright shadow just below the surface of the water.

Thinking and hoping it was a whale shark, they slowly motored over to it, only to be surprised to see that is was a huge net—it was whale-shark size and even had the same shape!  The crew quickly shifted into “ODA mode” and started to figure out how to haul it on to the boat.  Their ocean-loving customers were eager to help remove the mess and get it out of the water!

A couple helping hands put their snorkeling gear on and jumped in the water as the captain positioned the stern of the boat right next to the net.  As they started examining the net to see if any critters were stuck in it, they saw dozens and dozens of frog fish in it.  There were also crabs and dozens of juvenile filefish.

Check out this video of the fish in the net:

A Dangerous Type of Shade

In addition to all the fish that were in the net, there were about two dozen big mahi-mahi swimming all around it.  All these critters were there for the same reason, to seek shelter and shade.

There aren’t many places to hide from predators in the open ocean, so they utilize any floating objects for protection.  Normally those objects would be floating palm fronds, tree limbs, logs, or even coconut shells.  You know, natural and organic things… 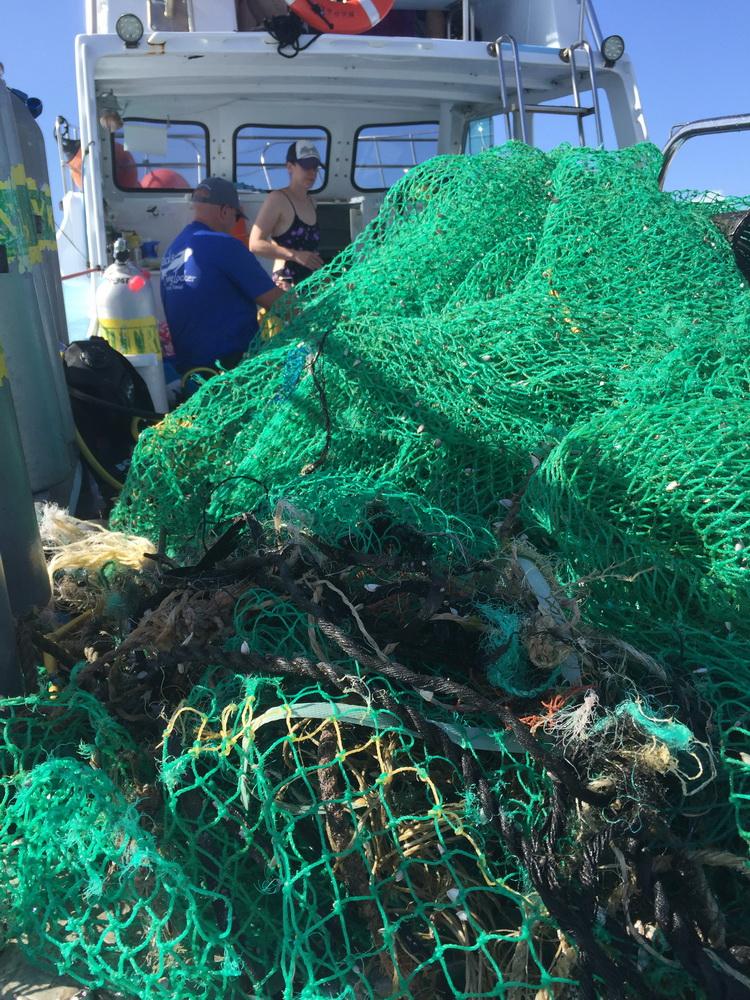 But with all the plastics in our oceans these days, they use these floating man-made objects, too.  It might sound like a good thing for the animals, but plastics are made from petroleum products and leach toxins into the water column as the materials start to degrade due to exposure to sun, wind, and waves.  In addition, the plastics actually act as a kind of sponge in that they attract other toxins that are floating in the water such as from sewage, pesticides, and runoff from roads.

Fish, crabs, and seabirds don’t know that when they eat this plastic they are ingesting those toxins in high concentrations.

When these nets are in the water for a long time, algae start to grow on it, and the animals eat the algae as a food source.  And you guessed it, that seaweed has absorbed toxins into them as well…

Some fish, crabs, and octopus will attach their eggs to the plastic, and then the eggs absorb the toxins.  Those embryos then have a greater probability of becoming deformed due to coming in direct contact with the toxins.

Enough of the lecture on how awful plastics are!

Okay, you don’t have to shout!

Once the team saw how many fish were in the net, half of them hauled it in little by little.  The other half were shaking the net, forcing the fish and crabs out of the net and back into the water.

Once the net was completely on the rear deck, all of the customers went into “ODA animal rescue mode” by picking smaller animals out of the net and releasing them back into their native environment. 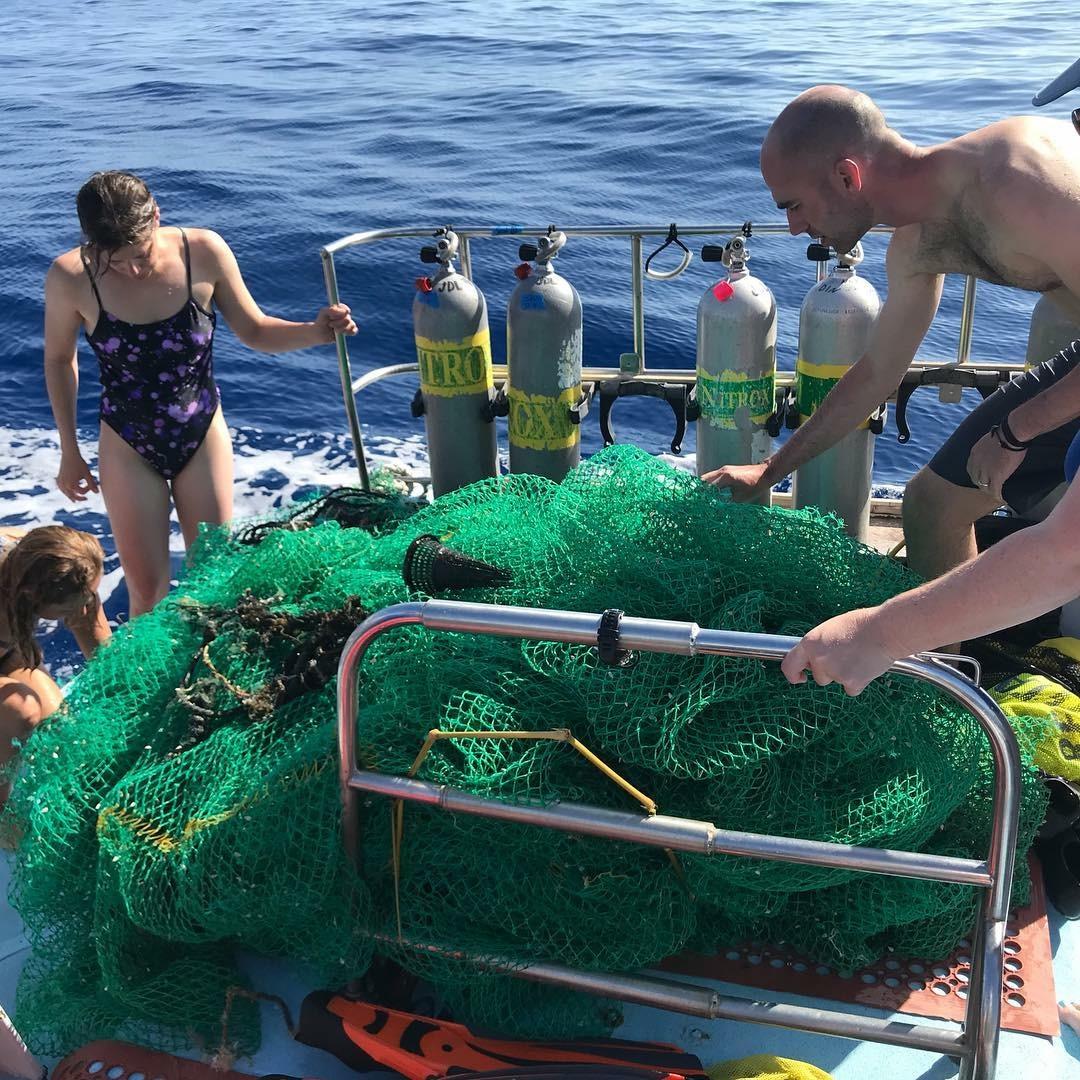 In all, they estimated that over 100 frogfish were released, dozens of crabs, and several filefish.

At the same time, another one of the JDL boats spotted an unusual shape about two miles offshore, and on closer inspection discovered a derelict rowboat!  It was upside down.  They got it turned right side up, bailed out the water and hitched a tow line up to it to bring it back to the dock. 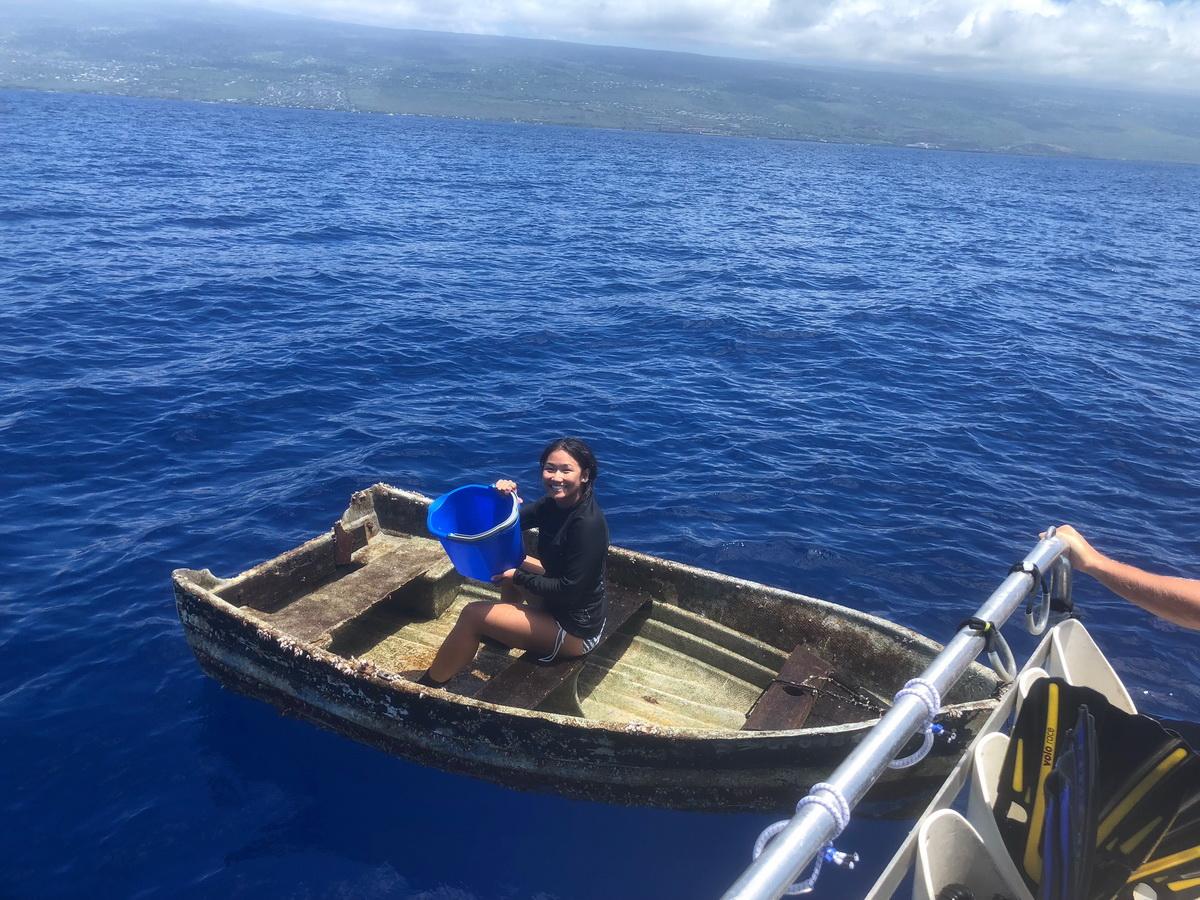 When it was hauled up onto the pier, they saw that the boat was from California!  You have got to be kidding me…  As you can see, the boat had a registration sticker on it from 2015 (please look in photo gallery below).

What a long, strange trip that boat was on.

Boatloads of Appreciation to the JDL Crew & Customers

I want to thank the entire crew at Jack’s and their diver customers, for going the extra mile and making sure that dangerous net is out of the water.  It won’t be killing any more animals and it will not be a navigational hazard for any unsuspecting boat propeller.

Each one of you can feel very happy and satisfied that you’ve saved the lives of so many ocean critters who were doomed to die in that net and many untold more that would have followed suit.

We especially owe a debt of gratitude to Sarah Matye.  She sent me the images that you see here, and she took time out of her busy day to tell me how the day unfolded.  All the info I wrote about here was from the conversation I had with her.

JDL and ODA: A partnership made in Hawaiian heaven! :-)

If you live on the Big Island and want to join us on an outing, please email us at .