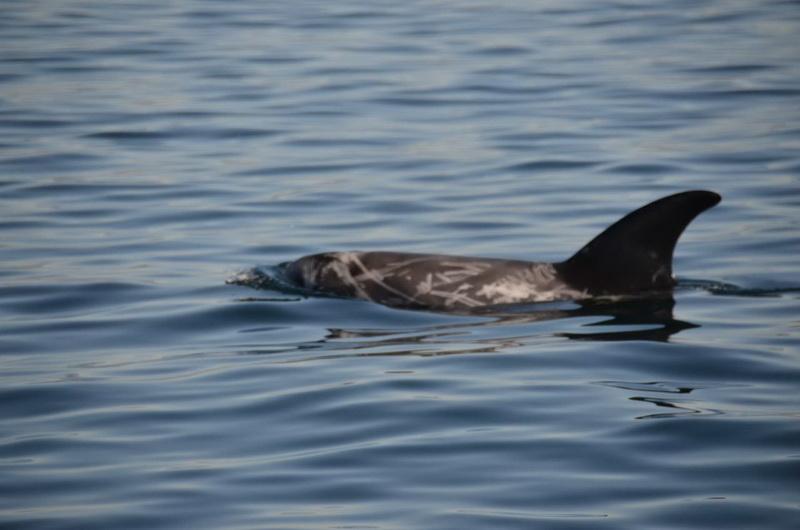 We started off the month of November in grand style!

On Friday, November 1st, brothers Peter and Trevor Fulks and I headed out to Anacapa Island (one of the Channel Islands off the coast of Ventura, CA) to search for more abandoned traps and debris.

One of our supporters, Danny Black, suggested that we take a serious look at the boundary line of the Marine Protect Area (MPA) on the north side of the island, so that is where we started.

On our way to the island, about five miles from it, we came across something I had never seen before: many hundreds of Risso’s dolphins. The most I had seen previous to this were small pods of 15 to 20 of them. 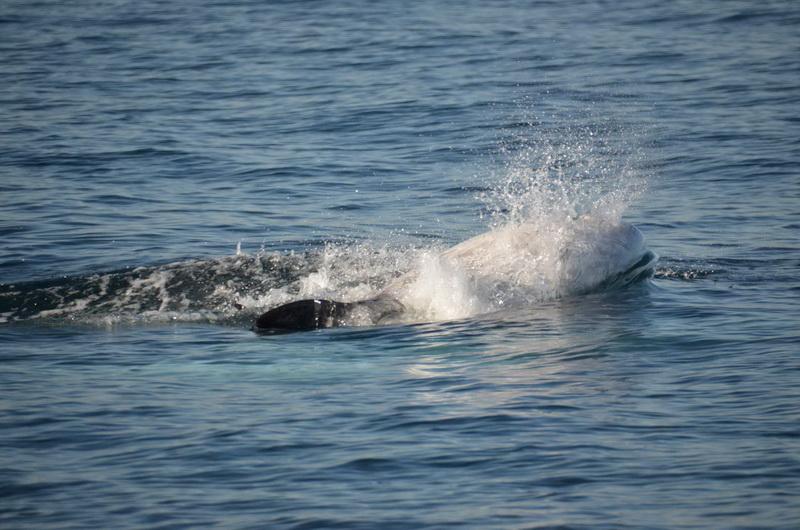 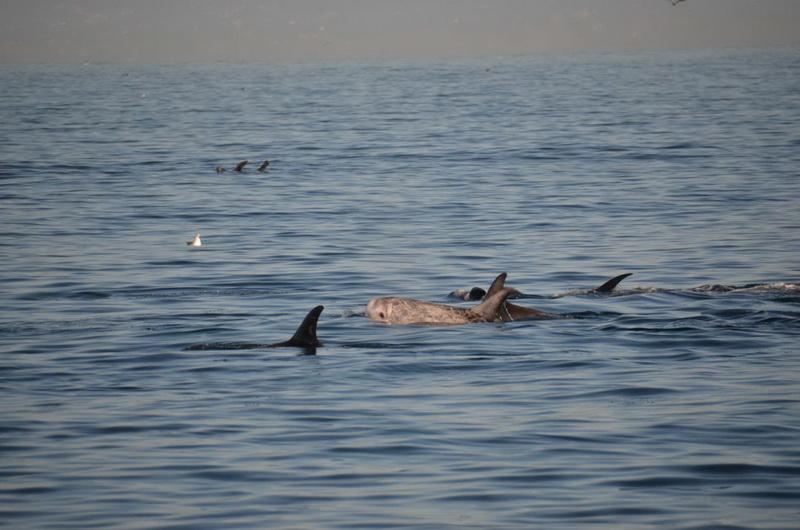 As soon as I saw a few of them, I turned the engines off to allow everyone to take in the experience, and suddenly all around us were Risso’s dolphins, stretching about a mile in every direction around us. They were traveling in smaller groups with some distance between each group, but there must have been 400 to 500 of them altogether! I have since read that this was a highly unusual event: they usually travel in small pods, and super pods like this one are rare, though not unheard of.

Risso’s are very large for dolphins, and can reach 12-feet long when mature. They have a distinct dorsal fin that is very triangular and tall. They begin as youngsters with black bodies, and slowly turn lighter (pale gray or almost white) as they get older. And as they age, their bodies become marked with white scratches and scrapes from all the fights they have with their favorite prey: squid. It was exhilarating to witness such a magnificent display of oceanic nature, especially since we were on our way out to help keep all of it healthy. [See more pictures in our photo gallery below!]

…but let’s get back to the task at hand 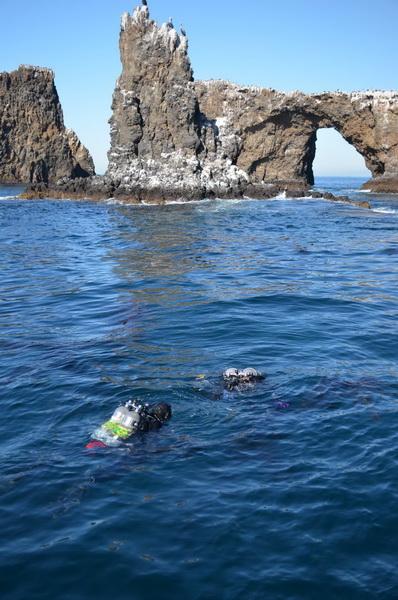 We tried to anchor along the eastern boundary of the area, but were confronted with a really strong current and decided to pull into a spot near there that was out of the current.

Once in place, Peter and Trevor grabbed the Diver Propulsion Vehicles (the underwater scooters we were able to purchase thanks to Mr. Bob Barker!) and headed out to see if the underwater current was more hospitable than it was topside.

We got our answer quickly. As soon as they got to the outside of Arch Rock, they had to turn back. Even with the DPV’s at full speed, they could not safely make any headway. 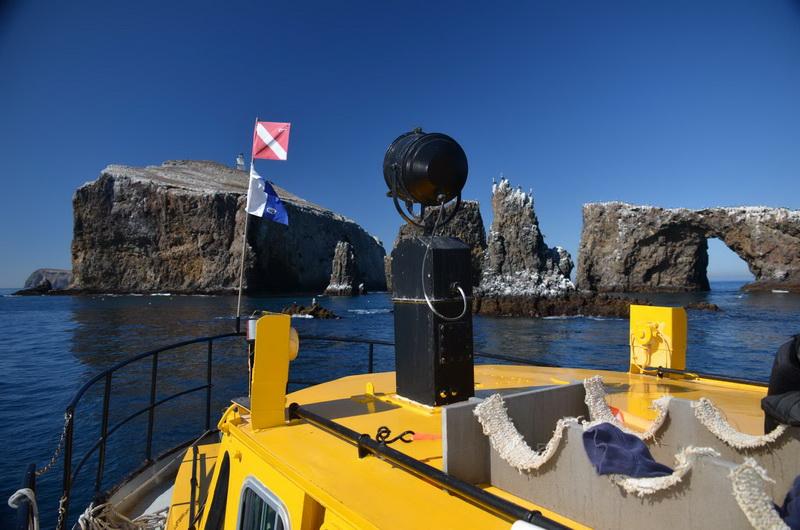 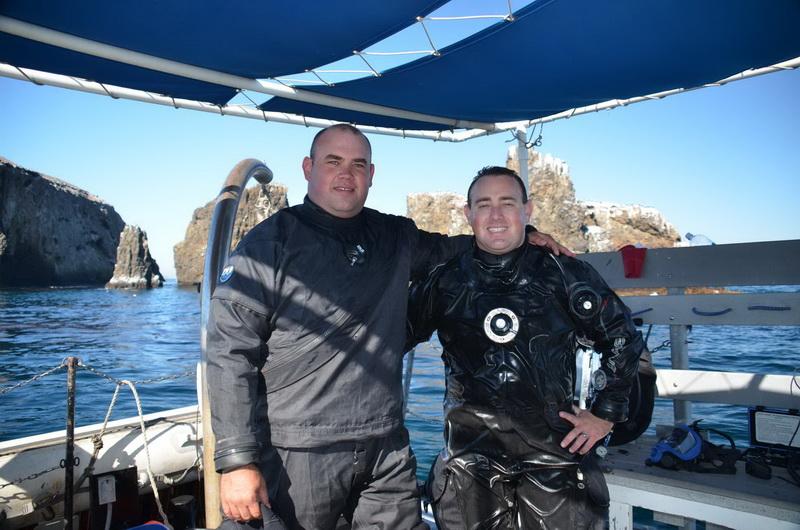 So, we pulled up anchor and tried another area that had been reported to us as having high concentrations of active lobster traps set. We usually find abandoned ones in these areas, but after an hour of searching, didn’t find anything.

While admittedly it is frustrating to hit obstacles such as these, our percentage of successfully locating marine debris is very high and we realize that we must endure the scouting process to get to the "bounty" of abandoned fishing gear and other man-made trash. It is all part of the wonder of working with nature! 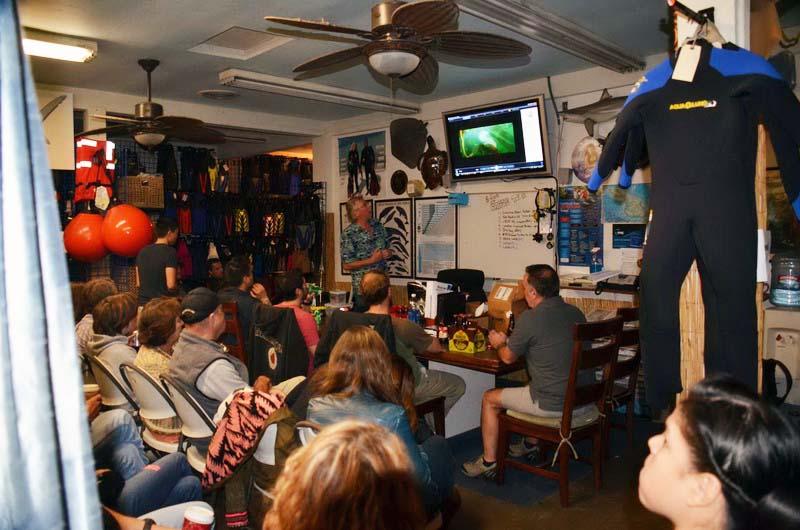 On Wednesday the 6th, I traveled to a dive club in Culver City to give an annual presentation to about 40 people. It was nice to get a chance to reacquaint myself with some of the people I’ve met over the years.

This is a great club, and it was nice to see there were no spearguns in the dive store. This is my kind of business: one that promotes inquisitiveness and exploration, NOT killing fish.

The following Saturday, November 9th, we decided to see what kind of debris would be near the Channel Islands breakwall. This is a man-made structure put in place to “break” waves as they enter a harbor. The structure is made up of huge rocks that are taken from a rock quarry and dumped via barge at the site. This creates lots of nice little nooks and crannies for fish, crab, and lobster to hide in.

Well, fishermen are well aware of this and target these sites whenever they can. Commercial lobster fishermen can legally place their traps “near” the breakwall, however, that is defined to be no closer than 200 feet from the wall. The fishermen may follow the law, but they set a large quantity of traps to make up for the distance. Typically, you will see something like 100 traps, all lined up perfectly parallel to the wall!

Because they are in such close proximity to the harbor, lots of boats pass directly through this zone, and as you can guess, the boat propellers cut lots of trap lines as a result. 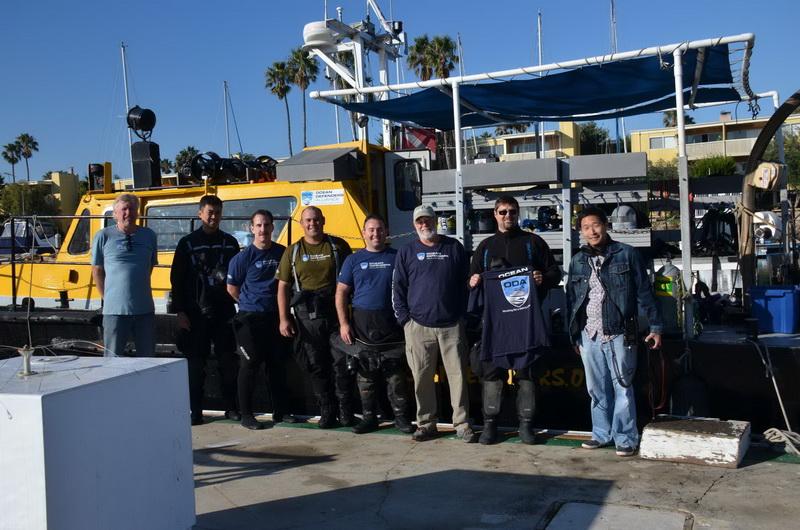 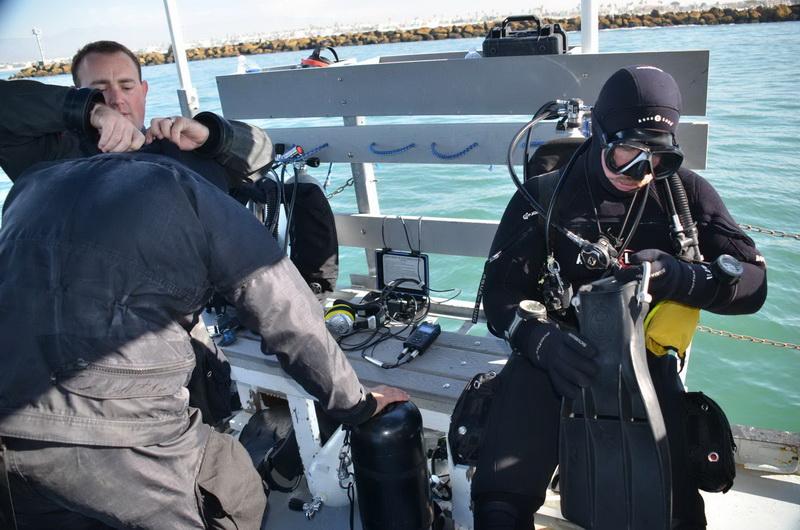 For this series of dives, we had volunteers Andy The, Jeff Larson, Kevin Augarten, and Peter and Trevor Fulks. On deck was my new best friend, Tim Pearson…and, boy howdy, did Tim pull his weight this day! I am very thankful for his efforts.

Andy, Peter, and Trevor formed one team and searched the active trap line that I referred to above. Jeff and Kevin went in closer to the wall. Soon we had lift bags popping up all over the place. It was chaos. Tim jumped in the Zodiac and went to inspect each bag to see if he could haul it into his boat and bring it back to the Clearwater. This worked a couple of times, but most of the bags had something heavy on them that he couldn’t haul up on his own.

After about an hour of the guys being down, we got them all aboard and started the arduous task of getting all that heavy stuff onto the boat. In all we removed four traps—two of them were huge (5’ x 4’ x 2’)—plus hundreds of feet of polyline, and 200 more pounds of debris. The guys found two traps, with seven lobsters in one and eight in another. There was also a good size sheepcrab in one of them. So, 15 legal sized lobsters got to live (and breed) another day!   That was the most lobsters we have ever released at one time. Way to go Team ODA! 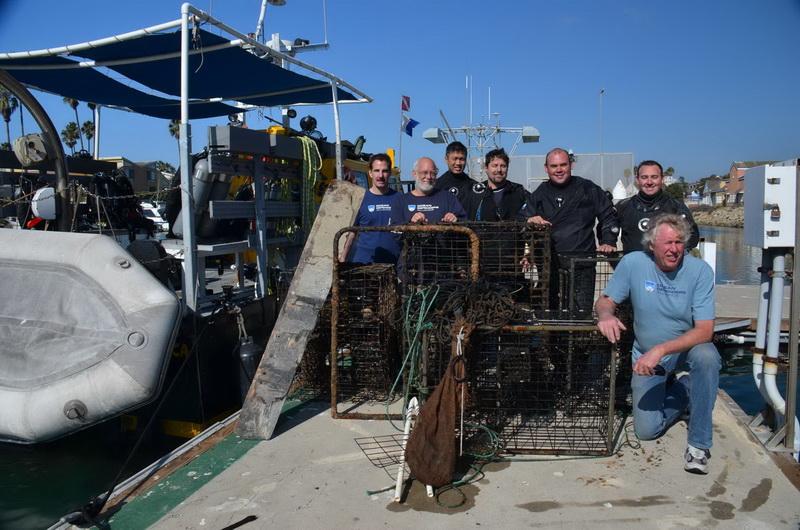 So, after just one dive, the boat was filled up with traps and debris; we had to call it quits and go home.

We have an appetite for debris!

The following day, Danny Graham, Jonathan Hanks, Peter Fulks, Trevor Fulks, Clint Rhodes, and Mike Wynd all headed out to a wreck site that was reported to have nets on it. It was a vessel called the Bulldog. It lies in 100 feet of water, about three miles from the Ventura Harbor. 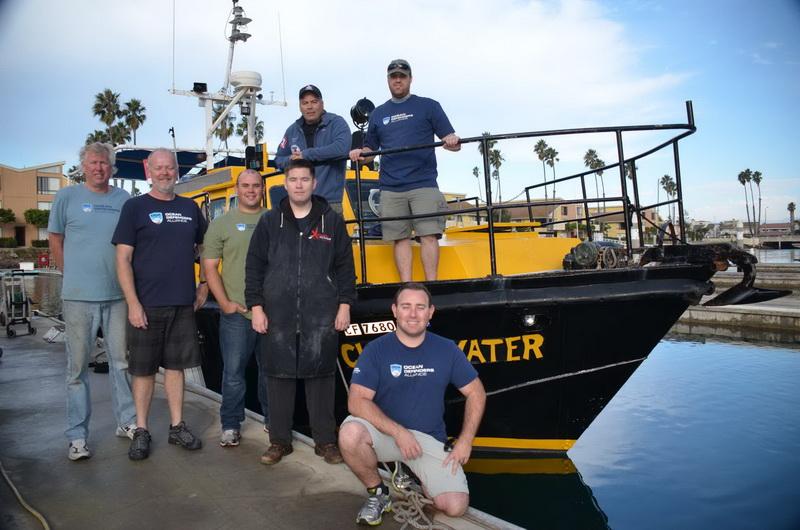 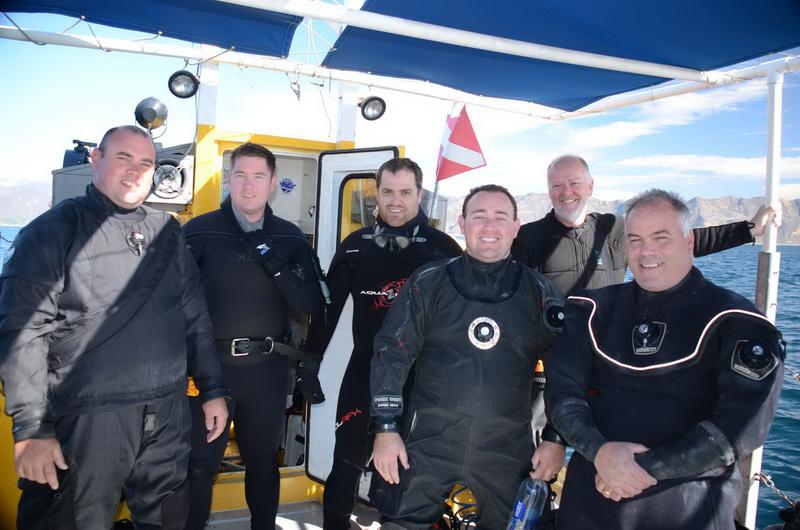 We found the site with no problem thanks to Jonathan’s exact GPS numbers. But when the guys got down to take a look, they couldn’t see it. They literally either ran into it with their fins and/or hands. They soon realized that they couldn’t do anything in that kind of visibility and called the dive.

Not to be defeated, we headed to a site that Jonathan had been on before and knew that there was some net and at least one trap on it. This is the wreck of a large sailboat. It lies in 80 feet of water, is about 50-feet long, located about three miles outside the Channel Islands Harbor.

The guys were pleased that visibility was like the tropics compared to the Bulldog site, at 15 to 20 feet. After about 40 minutes, we had one of those large traps onboard and about 100-120 pounds of net.

We headed home relieved that no more animals were going to die needlessly in that net. 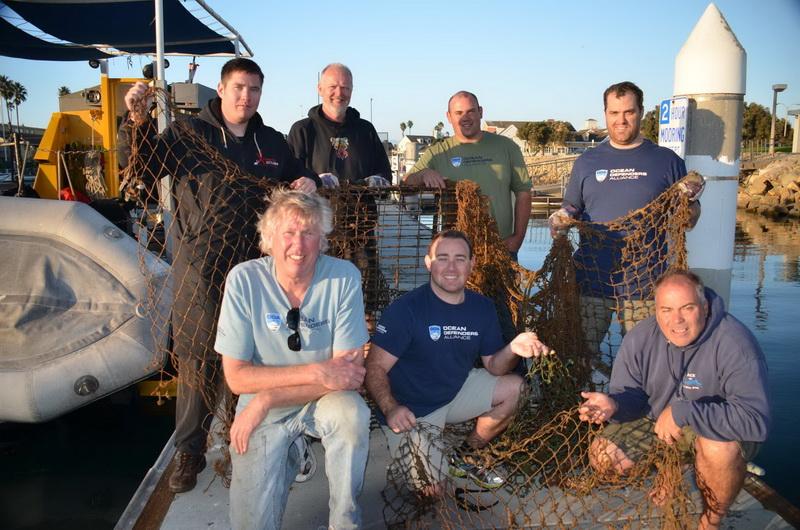 It was the end of an extremely productive weekend for ODA and the ocean.

Huge thanks to our dedicated volunteers. Our gratitude is further extended to our equally important supporters because of you we’ll be out there again next weekend!

Please support our work so we can keep on cleaning the ocean!